The YF-21 Valkyrie is a unique valkyrie design that unfortunately was never used after the series aside from an appearance in a Macross video game. I guess thats what happens when you lose the contract to UN Spacy for the next generation fighter. 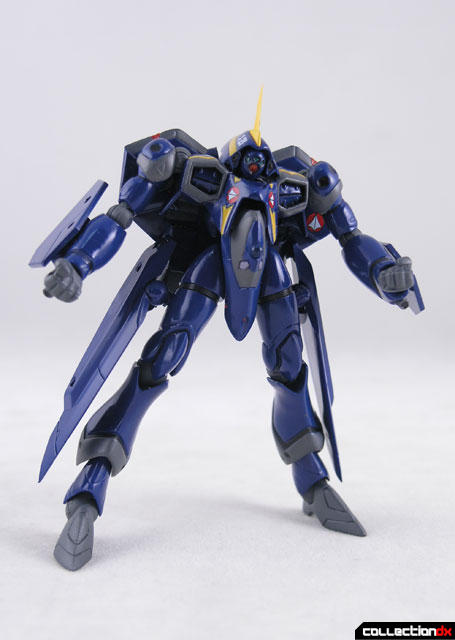 The Revoltech YF-21 is a good toy - very articulated and durable. Despite being bested by the GNU series YF-21, it is still a worthy purchase and worth adding to your collection. 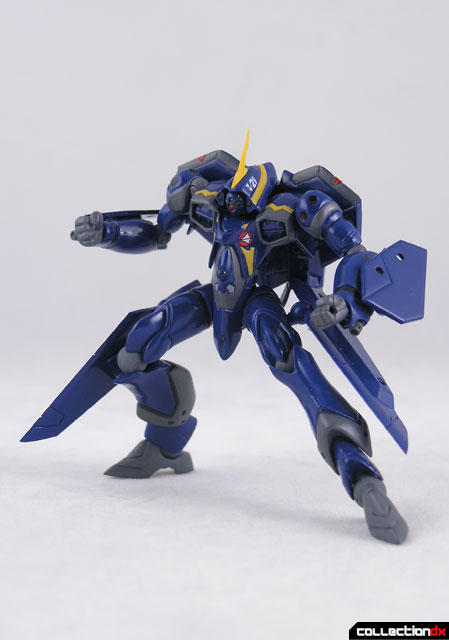 Articulation is great, especially for this design. Somehow Revoltech designer Yamaguchi managed to give this toy a waist joint, a much-needed addition to the design. There are 46 points of articulation, largely due to the Revoltech joint system. Because the YF-21 is a slimmer mecha, they use the smaller Revoltech joints for most of the joints in this figure. 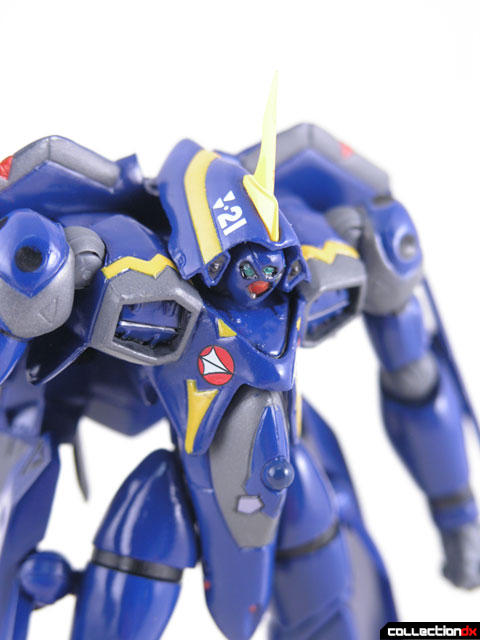 There are a plethora of accessories included with the YF-21.

The Gun fits securely into one of the included variant hands. There are also closed hands and open hands. 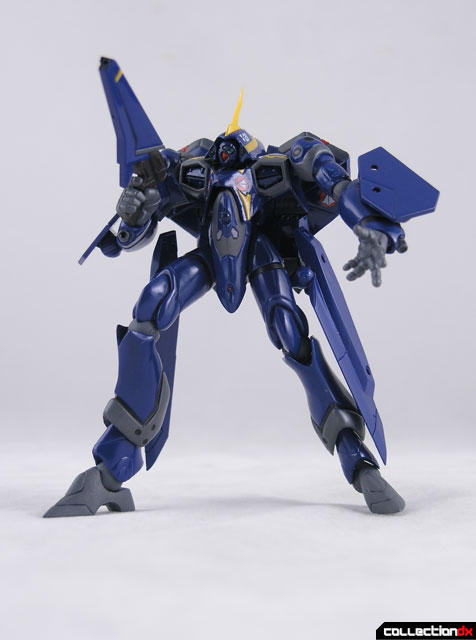 Fastpacks are included with this figure as well. The Fastpacks are additional armor used to beef up the existing design. Here the panels are added onto the wing sections on the arms (which are articulated with Revoltech joints) and on the large panels on the hips. They go on easy enough, but taking them off is tough. 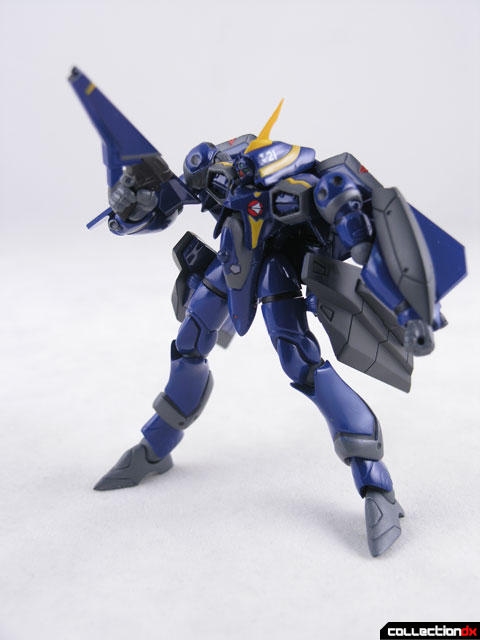 Also included are parts for the pinpoint barrier system - a movable electric shield of sorts. These parts can plug into either forearm armor for additional protection. 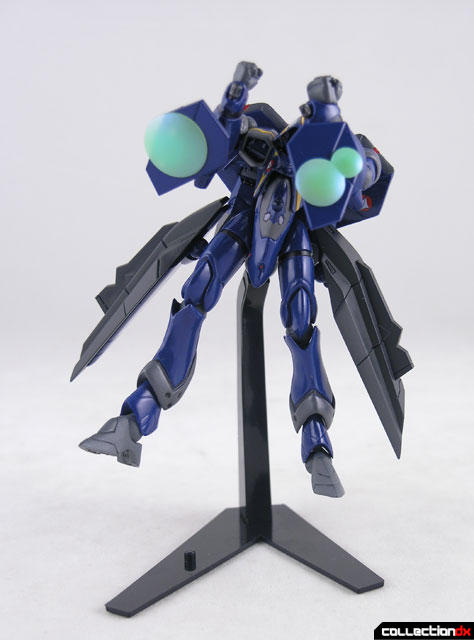 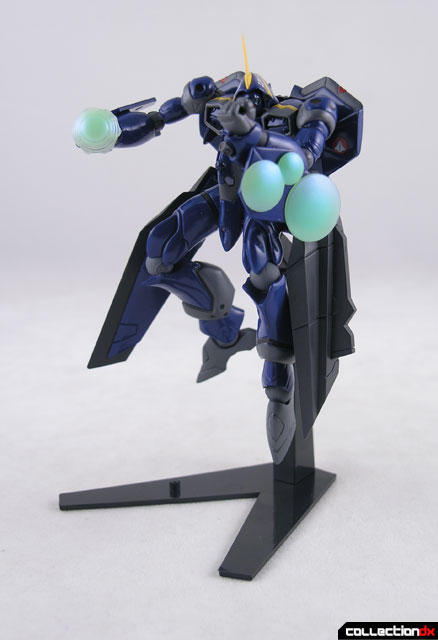 The stand is pretty much the same as any other Revoltech stand, and attaches to the rear of the waist of the figure. 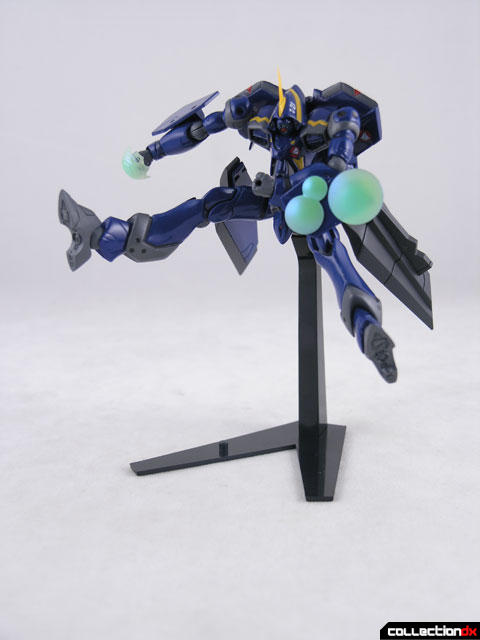 Naturally one is going to compare the Revoltech YF-21 to Yamato's GNU series YF-21. Both have their pluses and minuses, but I am drawn to the clean lines and toy-like quality of the GNU version. The Revoltech version is not bad at all, but when stood next to the GNU - you can see the differences. 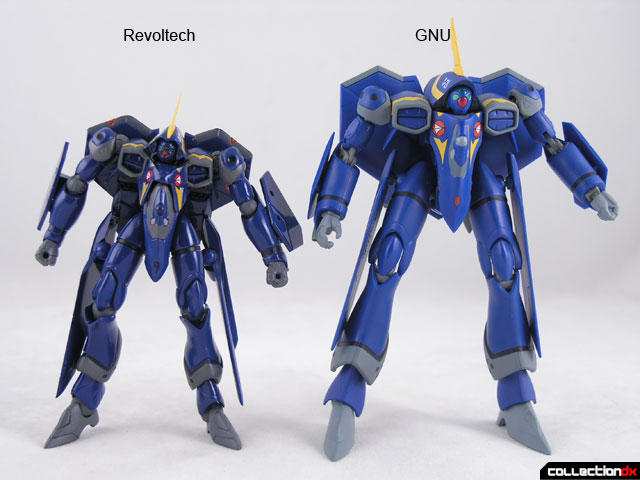 I do still recommend this version, especially if you are a fan of the Macross line. the feedback I have been getting is that although the GNU appears superior, people just like collecting the Revoltech line.

Of course, you can get your Revoltech YF-21 at HobbyLink Japan.

I wonder if they will make some Valkyries from Macross 7

I hope not, but they probably will.

Macross II would be nice, since those saw nothing but 1 injection kit and some long lost resin kits 20 years ago. The story might be weak, but the designs were the best post-DYRL valks yet.

Mmm-! Nice to see someone else agrees with me on this. The VF-2SS was very faithful to the original VF-1 series, but put its own style on things which none of these newer ones ever did, save perhaps the VF-11. I also really like how they keep the nose & cockpit in the same location on the chest as opposed to folding things up beneath the head, and then placing wings on the hips (a la VF-19). Also, I would liked to have seen models & toys of some of the other mecha, like the new versions of the Defender, Phalanx, and the Macross Cannon. (That Metal Siren from Macross-II, BTW, sucked eggs badly. Another next-gen design wasted on me...)
------------------------------
CollectionDX Staff

Didn't the YF-21 design also show up in Macross 7 as the VF-22 Strumvogel? Or however that's spelled. Of course minus the BDI.

Yes and the only real noticable design change was the face.

I'm hoping we'll get a VF-17 and a Fire Valkyrie out of this line. Considering we're getting that PSP game with all the Macross mechs it's a nice possibility.