Christmas 1985. Amongst a particularly odd mix of Christmas gifts, I unwrapped a Takatoku VF-1J. Robotech had been airing for a bit and my Dad recognized Rick Hunter’s Vertich and knew I would like it. I didn’t like it, I loved it but was baffled as to why it was in this strange Japanese box by some company I had not heard of before. No matter it was a solid, well built and fun toy and it sure looked like Rick Hunters Veritech! Many hours were spent entertaining myself in the backseat of our Volkswagen Camper with that toy as my Dad would insist on taking us on these God awful long car rides to nowhere for hours on end. 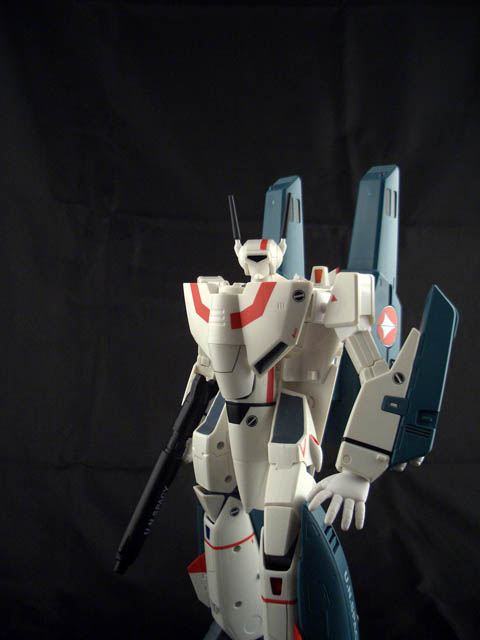 The months went on and I quickly learned that the “Macross Saga” portion of Robotech was actually an English adaptation of Macross, a Japanese TV series and that there where better toys out than the fairly sad Robotech branded offerings by Matchbox. Growing up in Hawaii during the 80’s means I had access to a lot more Japanese product than the average fanboy teenager at that time. I discovered the film version of the series, Macross: Do You Remember Love and the Bandai issued Valkyries in local toy stores and my love affair with Japanese collectibles was born. Sadly a few years later this particular piece would be lost to the ashes of time and a fire that ravaged our home. While we lost most of our possessions, everyone got out of the house and some pieces would survive. One even went on to become a cornerstone in the creation of CollectionDX. 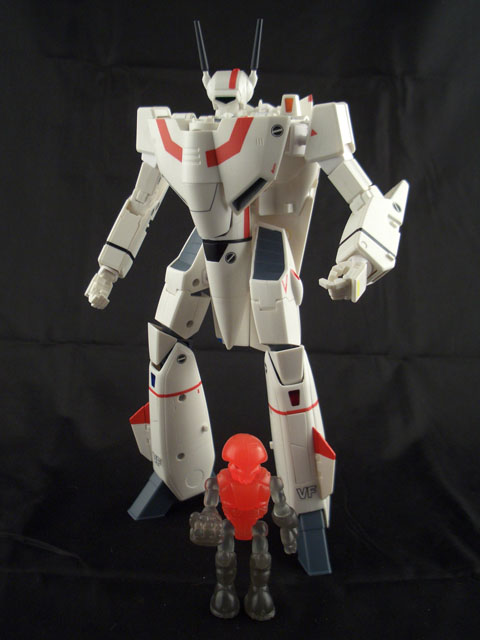 Christmas 2008. My monthly package arrives from our sponsors, and I unpack the Yamato VF-1J only to get that same wave of excitement I did years ago unwrapping the original Takatoku version. The toy collecting circle is complete. 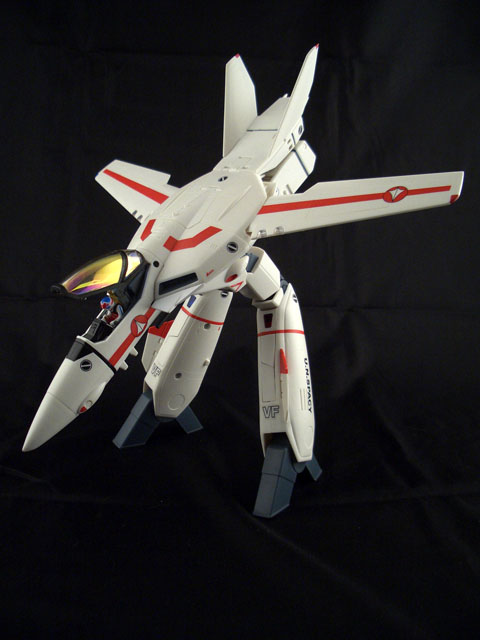 Yamato has really done an outstanding job with this new run of 1/60 scale Macross collectibles. The adult collector in me is impressed with the 21st-century engineering, while the kid in me is satisfied with what have been very playable toys. It’s a wonderful balance they have finally struck between “high-detail” and “toy”.

I’m hard pressed to come up with new and exciting ways to describe what is essentially the same toy as the previously released VF-1A or VF-1S just with a different color scheme. So I will say that the trend continues of releasing a well produced and well-designed piece. No surprises here, it’s solid in all three modes, fairly straightforward to transform and just looks magnificent on the shelf. Quality control again is top notch, something that used to plague repeated releases by Yamato. Panted detail continues to be plentiful and is all painted on in neat and flawless precision. So let me highlight what is different from the previous few releases as we go… 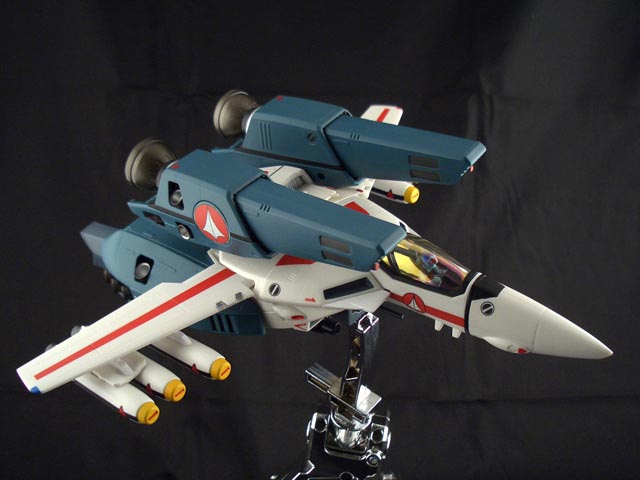 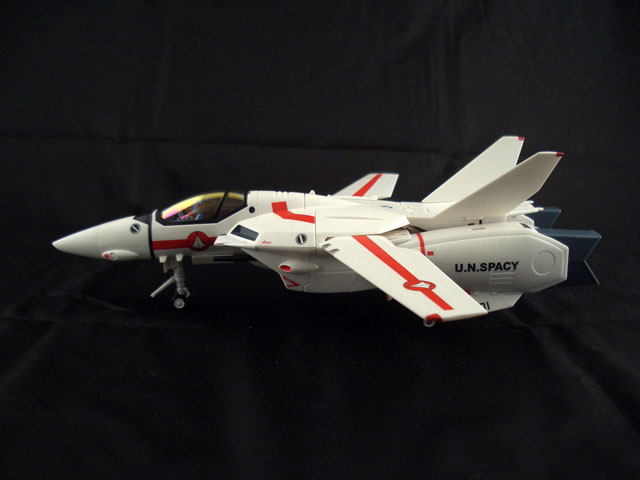 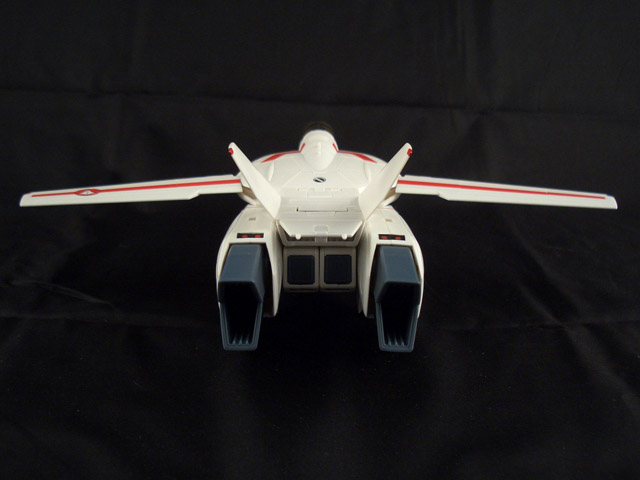 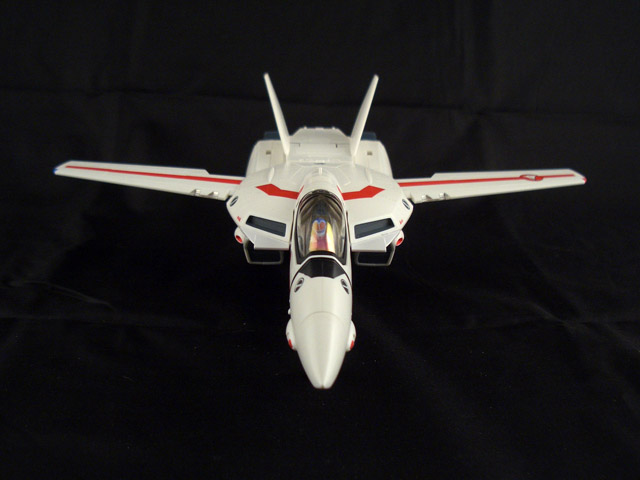 The Vf-1J is Hikaru Ichijo’s primary Valkyrie (ROBOTECH SPEAK: The VF-1J is Rick Hunter’s Veritech fighter.) for most of the Macross TV series before assuming command of Skull Squadron and the VF-1S. The plastic is on this release is white, not grey or off-white but white. It’s so white in fact you need sunglasses to look at it. 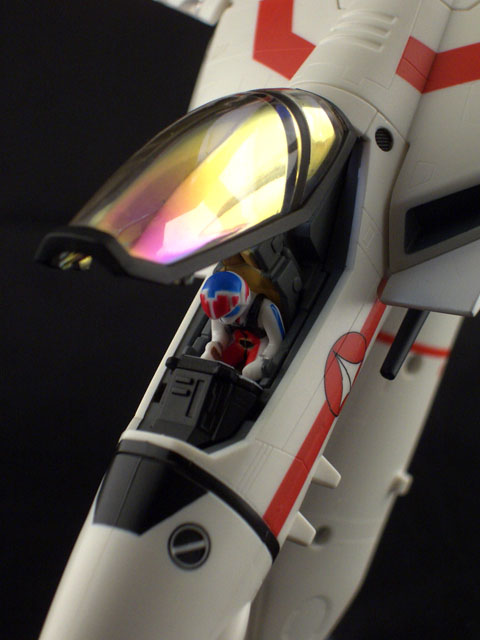 The removable Hikaru figure is a new sculpt and painted to match his TV style flight suit and also adds a flight stick to his hand. 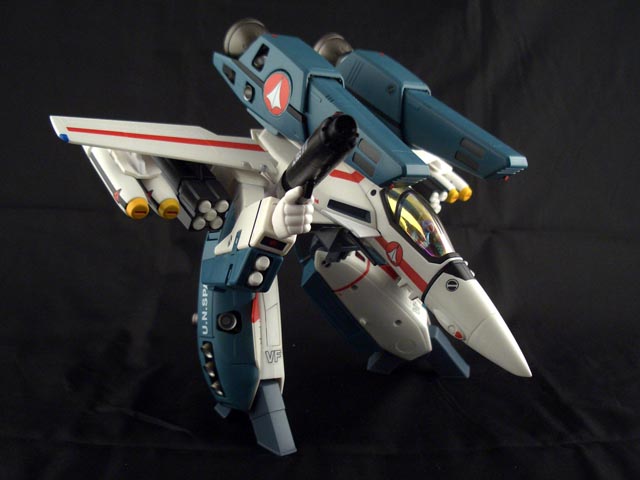 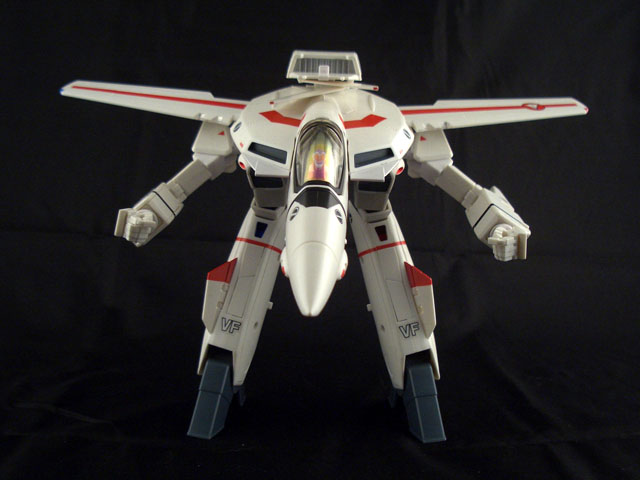 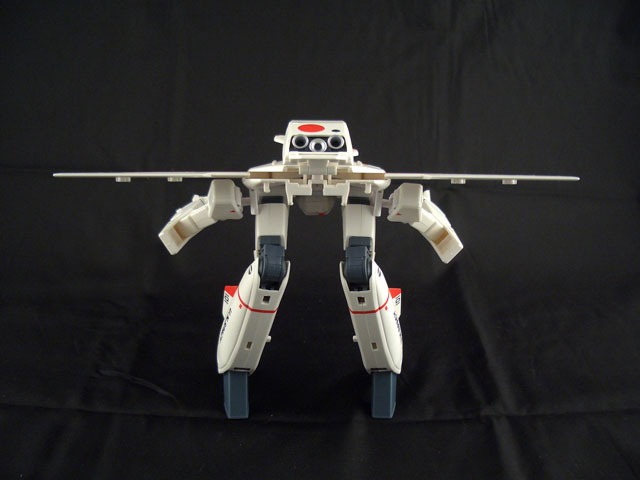 The anime style hands are new sculpts and look very much like the cartoon. The gun holding hand, however, isn’t very tight causing you to have floppy gunpod syndrome. The pose able hands still hold the gun very well. 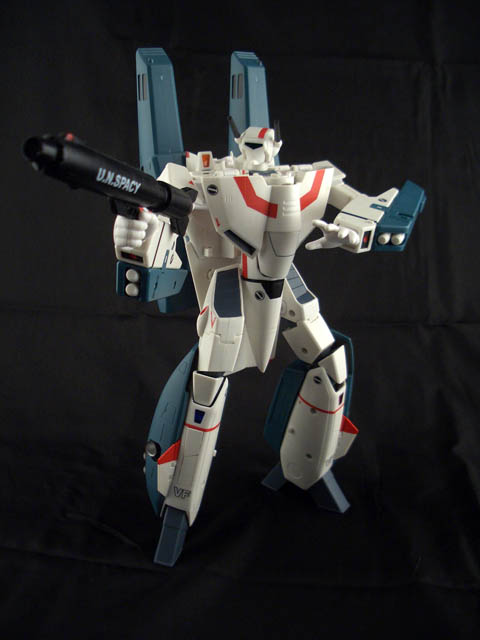 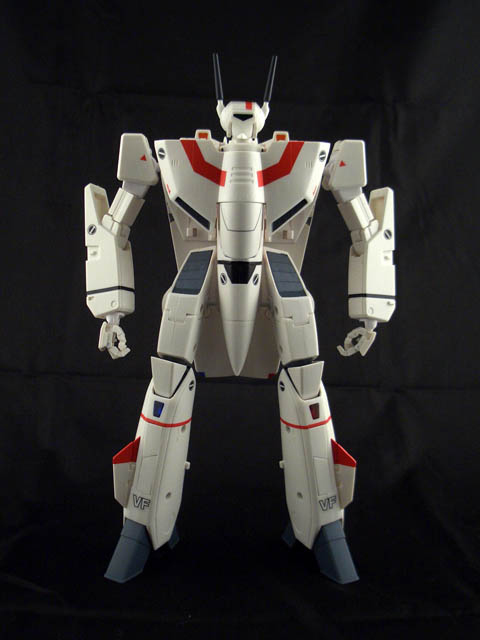 The Vf-1J head looks sharp but wish they would have gone with a translucent plastic and light pipe design to get the eye to “glow”. Ah well, have to have something to complain about something right? 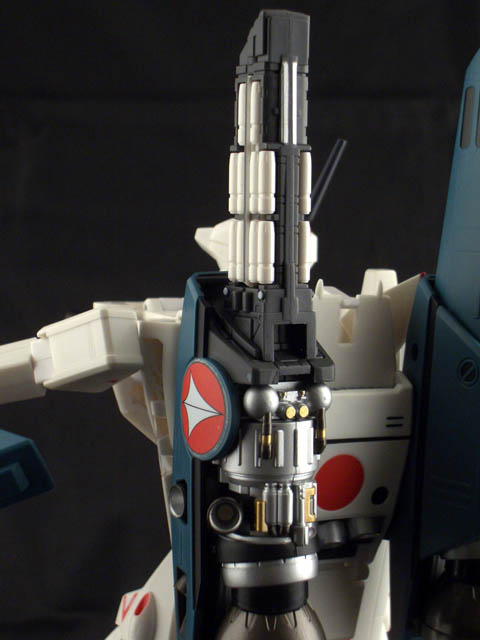 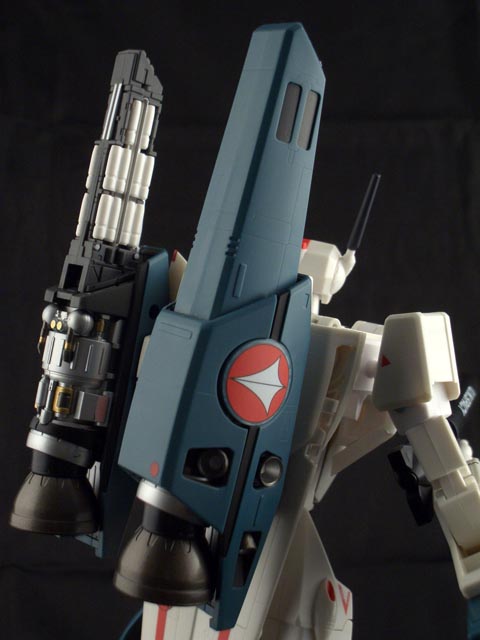 Super parts are in a lighter color of blue but for the most part, are the exact same sculpt. The arm gauntlets, however, are a new design as they have a slightly different shape to the ends below the wrists. 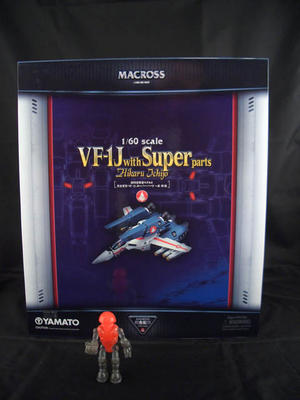 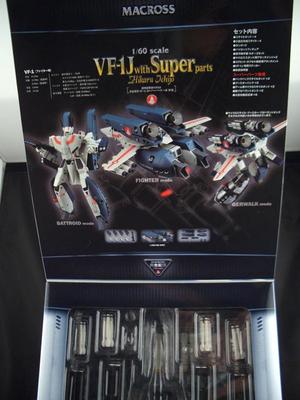 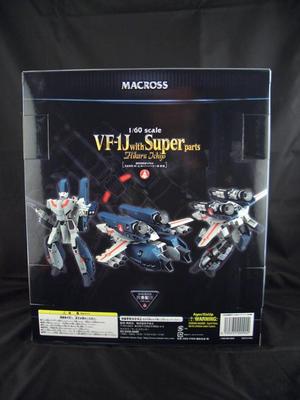 The box is the same dimension but Yamato has flipped it to be long instead of tall. Something I assume they did to differentiate it from the movie style product. 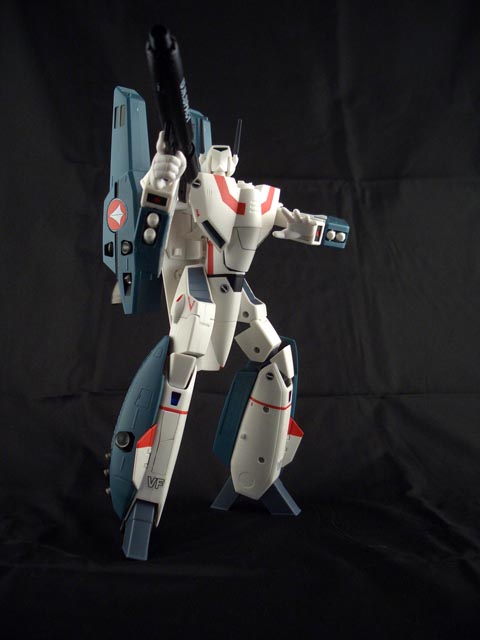 I’m going to be blunt. Whether you’re a Robotech fan or a Macross fan, whether you see Rick Hunter’s Veritech or Hikaru Ichijo’s Valkrie when you look at the picture below… 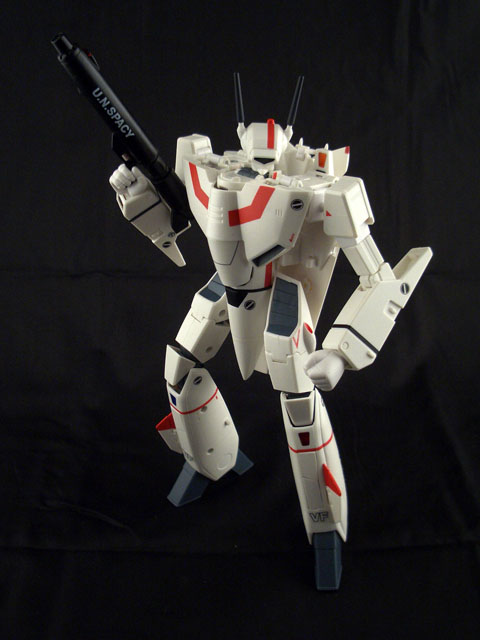 … You would be mentally deficient for not saving your pennies and getting a Yamato 1/60 Valkyrie for your collection. SERIOUSLY. If you have been collecting these as they come out, just know it’s more of the same goodness. If you haven’t been, know it’s very much worth the money spent. Just pick out a style you like and get it. Video review is embedded below for your entertainment.

Hey,
Your review looks great! Makes me really want to sell my 1/48 scale Yamato valks and get the 1/60. Great video review too! Hopefully sometime in the future we will be able to get you an HD camera. Keep up the great work.

I opted to comment here since I recently bought a VF-1J with super parts, my first Yamato Valkyrie 2.0.

I want to thank all the reviewers at CollectionDX for their insight in both written and video reviews. You guys have really helped me out a ton in researching for the right Valkyrie toy for my person. I'm not a toy collector, so it was all the more enlightening.

I recently re-watched Macross Frontier and opted to watch much of the Macross Franchise again, following with Macross Plus (my favorite of the bunch). In my surfing travels I came across some of your videos of the Yamato Valkyries and was like, "damn, these are super cool." They looked good and you could fiddle around with them. It looked like the perfect balance for me. But, then I saw the price tag and was rather flabbergasted at first. Then, I was starting to learn about what you lads coined as the "Otaku Tax." And, it made sense.

Since I acquired my VF-1J, I've truly come to appreciate the engineering put into the piece even more. Pictures and video don't seem to do it as much justice until you hold it in your hands. I just can't stop fiddling with it! Even if you arn't a toy collector, yet you're a Macross fan, you owe it to yourself to get one of these suckers. When I saw videos of the transformable Revoltechs they look loose and awkward. I would save up the cash and find one of these Yamato babies on sale. Hobbylink Japan (hlj.com) is definitely a good bet. If you can get the combo package with super parts, it's worth it all the more. It really adds character to the Valkyrie, and you "play dress up" to your heart's content.

For those not familiar with transforming these things, they can be a time consuming process. The first time doing it took me awhile, because some parts seem to demand a slight amount of force to execute. At least, more than one may think (or I'm just doing it wrong). As Atom mentioned, the gunpod is rather loose, sitting in the hand or in the tabs. Also, the swing bar is really stiff, making the transition to and from battroid mode a stress of the heart when putting the bar in the nose cone. Finally, there's complaint of broken "shoulders". The way it's engineered they swing and flip out on a rather weak-looking contraption. Some say they come out of the box broken. Mine were fine. I would just be careful when articulating the tight shoulders and you should be fine. (Note: There are recent re-releases and word of recalls so if you get a recent Valkyrie 2.0 you shouldn't have any shoulder problems out of the box.)

Other than these issues, it's a great piece to be had. It looks great, feels great, and ... get one!

Anyway, wall of text. I'm just excited and have you guys to thank. So, thanks again! Atom, you how-to video on transformation was also very helpful.