"Jungle Fury is the sixteenth season of Power Rangers. It was based on the thirty-first Super Sentai series, Juken Sentai Gekiranger. For over ten thousand years, the spirit of a pure evil known as Dai Shi has been locked away and safely guarded by the Pai Zhuq, the "Order of the Claw," a secretive Kung Fu clan. But now, evil has escaped and the Pai Zhuq has selected their three top members to fight this evil."

This version of the Tiger Ranger was the first released. He also has a figure in the the current Super Mega Force line of 5 inch retail figures, which includes many red and 6th rangers from past series to coincide with the past rangers (powers) appearing in the current show.
Standard Blister on card back packaging. 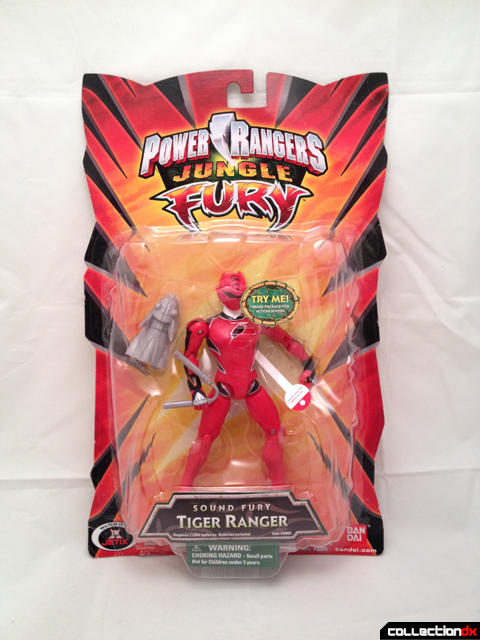 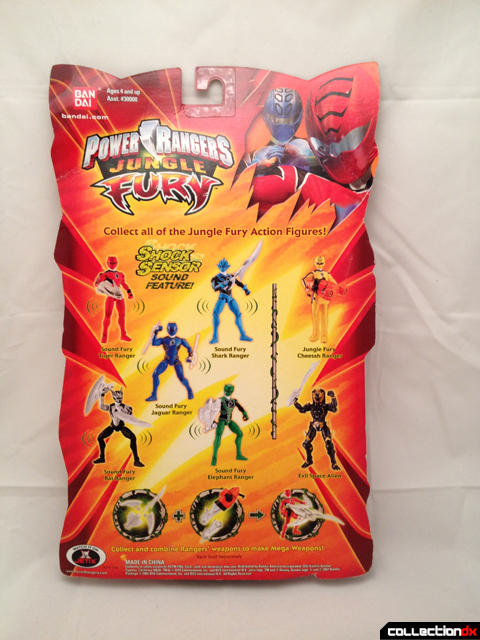 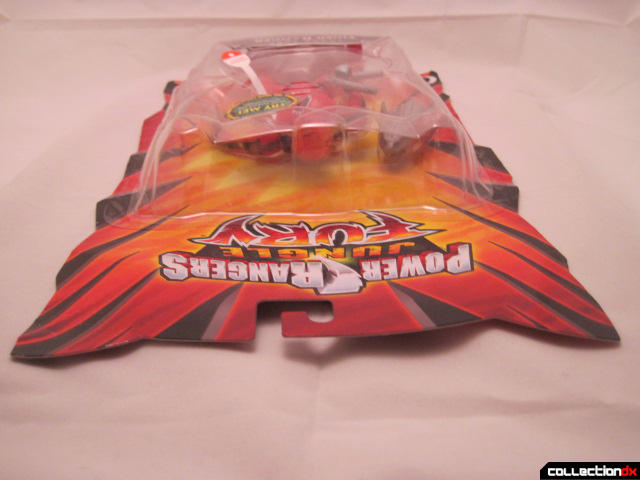 Standing at 6 inches, he is nice an brightly colored, with a pretty sleek design. He has mostly neat paint applications. 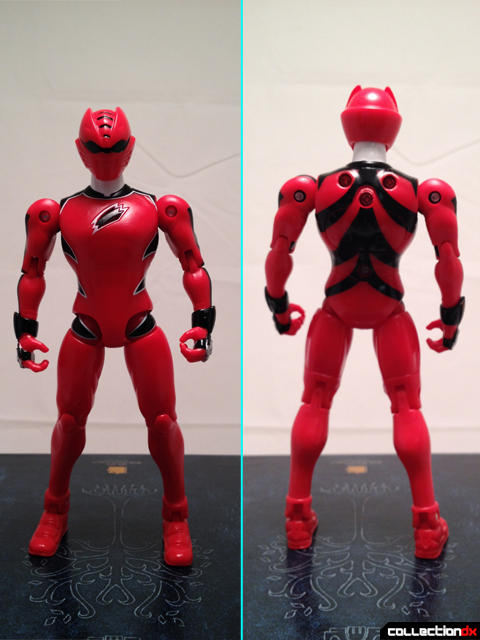 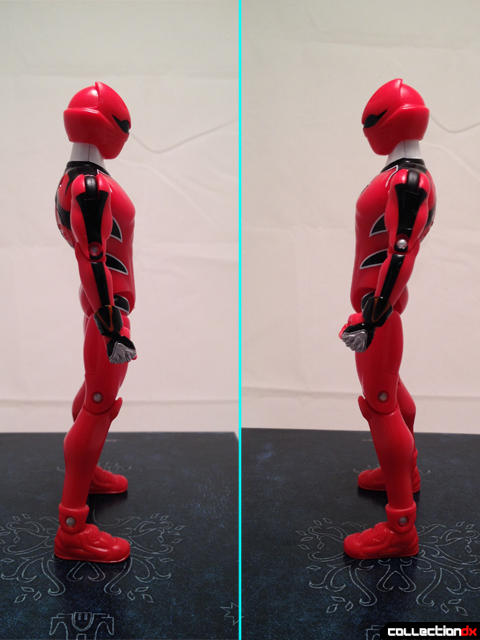 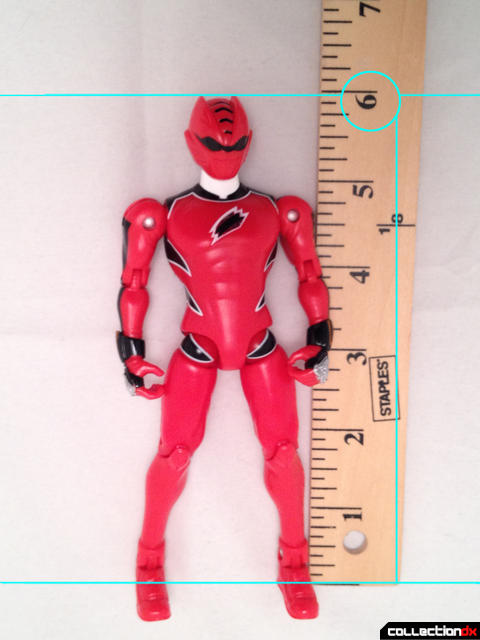 He has elbow, knee, and ankle hinge joints, with ball/swivel joints in the shoulder and hips. His wrists rotate, but on mine the left hand kept popping off it's peg. You can get him in some good basic poses. 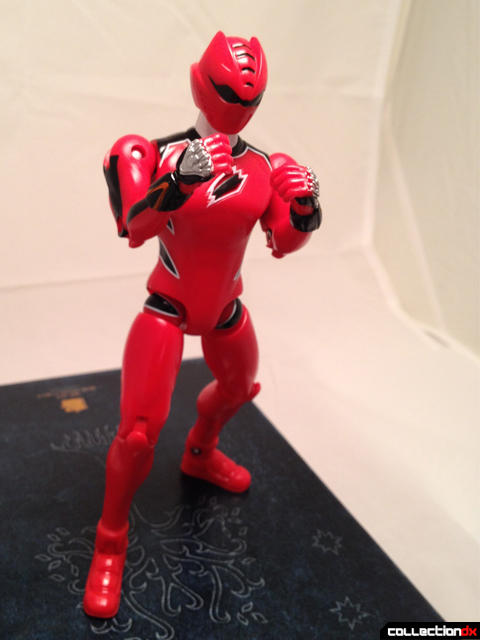 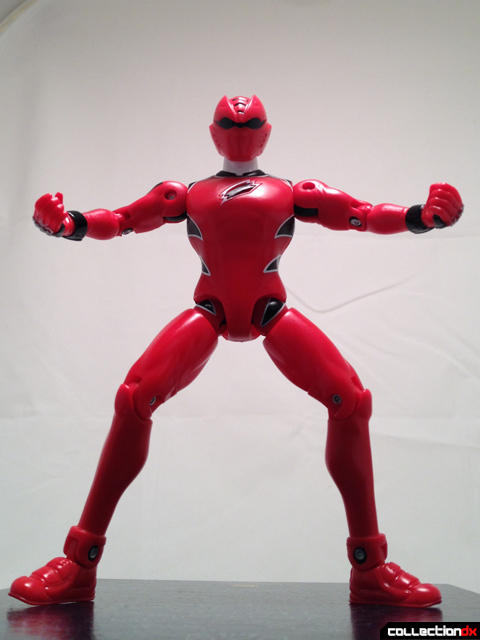 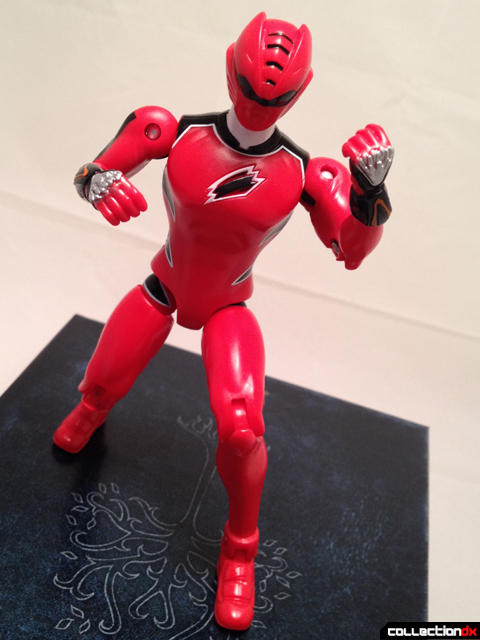 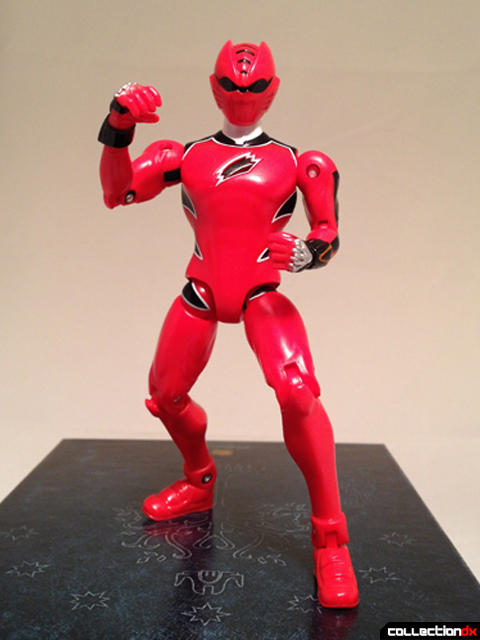 But, he is severely limited by the lack of any waist or head movement, its all one solid peice. 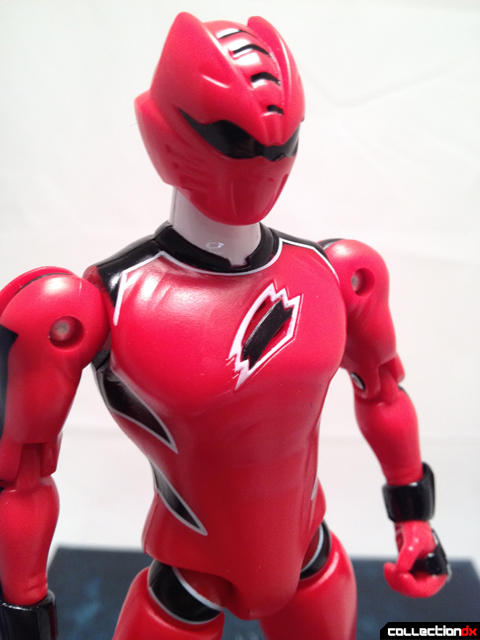 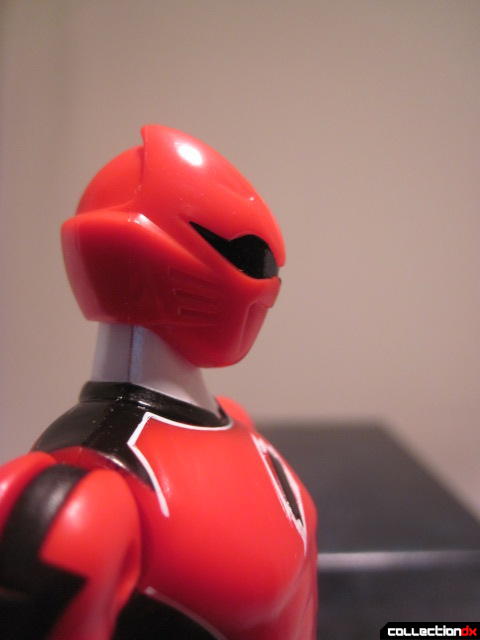 Red Tiger Ranger comes with 2 accessories: Jungle Chucks and the Claw Cannon Blaster / GekiBazooka component. They are both molded silver, red would be closer to show accuracy. The modern PRSM figure of this character comes with red molded chucks, but also the Jungle Tonfa / GekiTonfas molded in red when they should be silver. 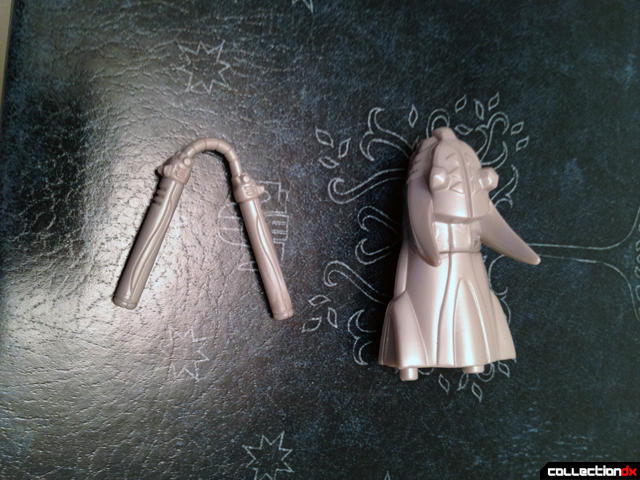 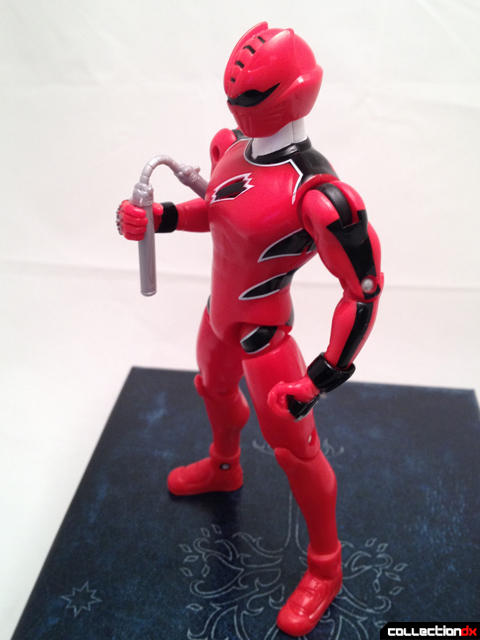 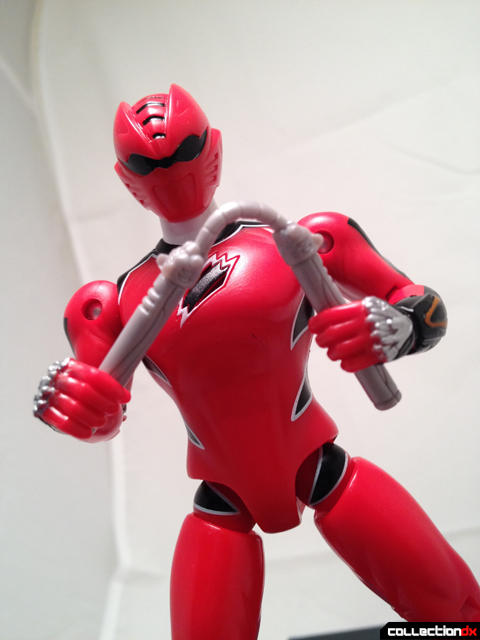 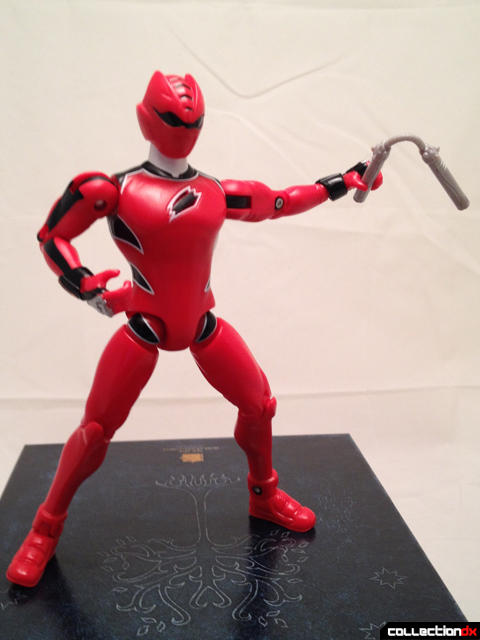 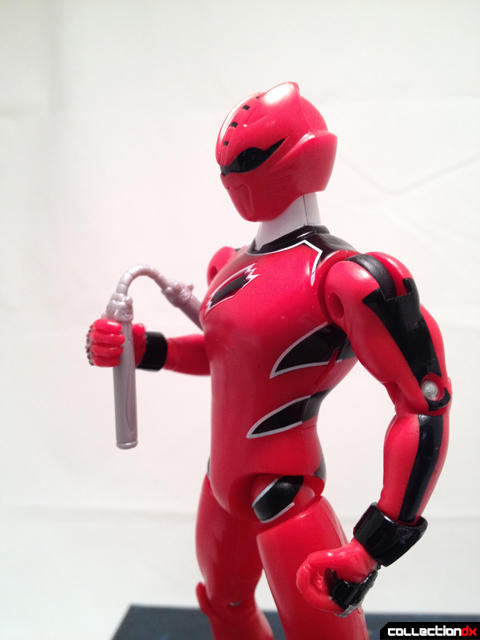 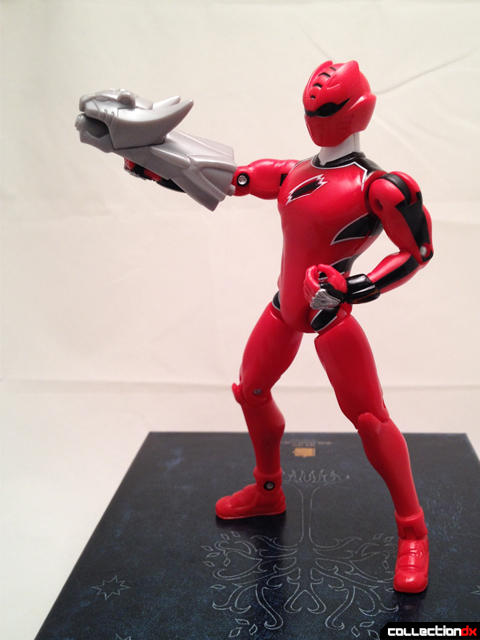 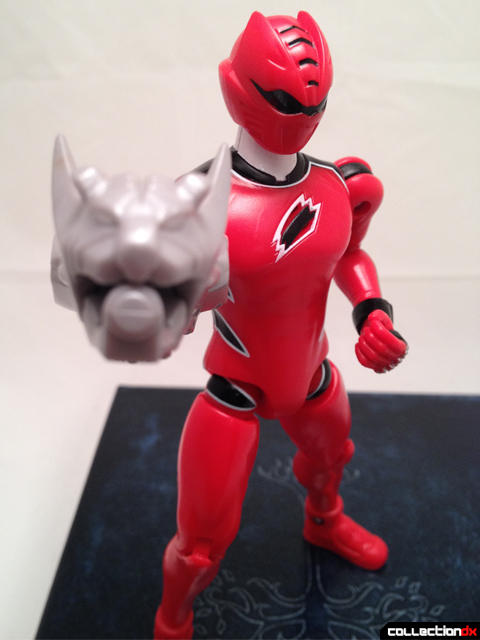 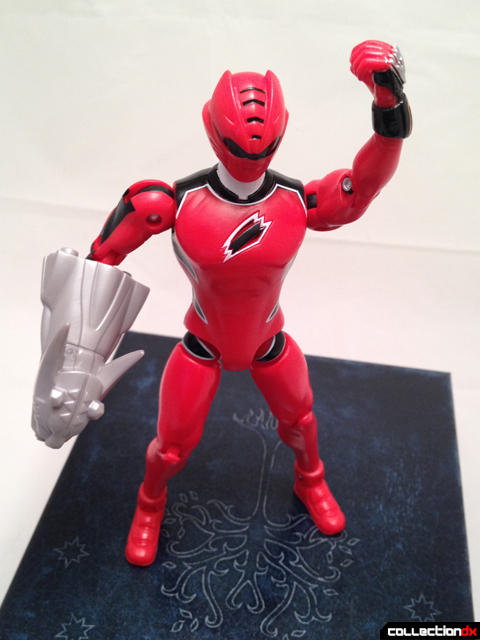 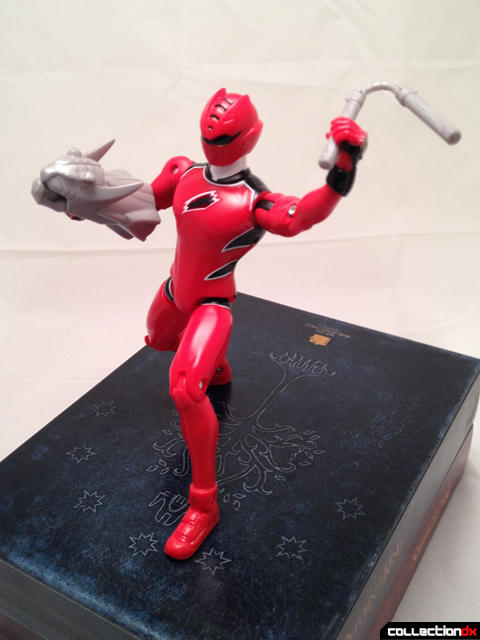 The Battle Claws / GekiChangers are molded and painted on, but have no functionality. On mine, one had nice paint and the other was sloppily applied. 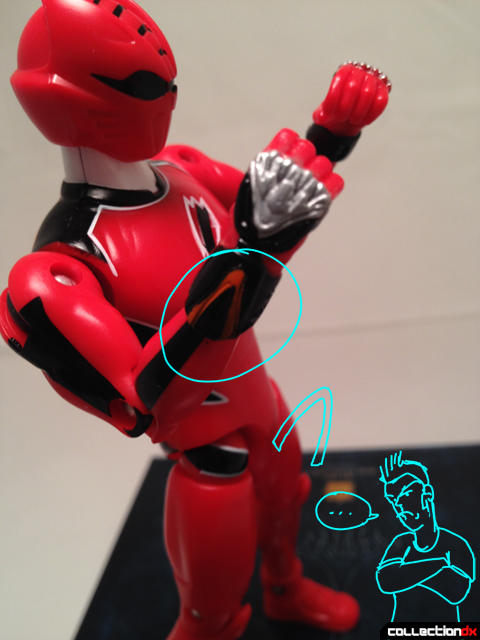 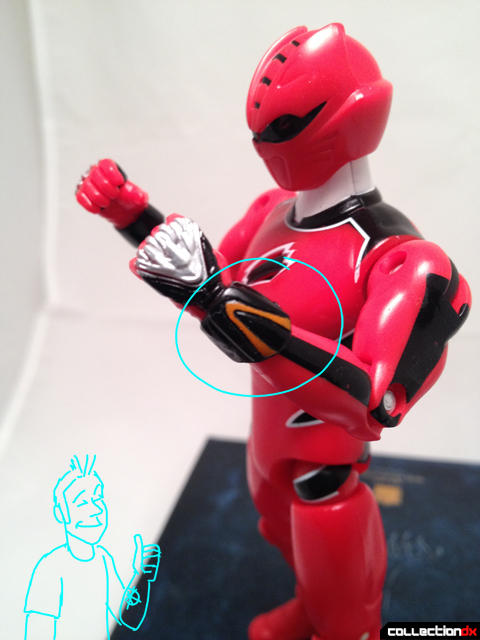 There was a slight (paint?) smudge, on the torso of mine, but it's not very noticeable from a distance, and I could probably clean it off easily. 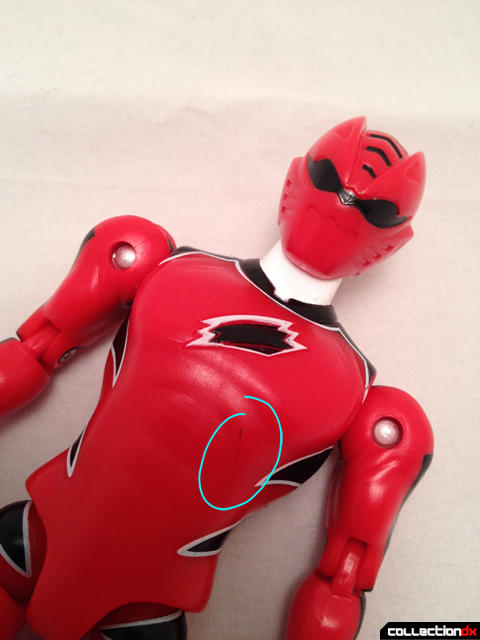 One of the Selling points of this figure/line is the "sound fury" A feature which all the male heroes have (sorry yellow, once again female PR get no love). Basically light impact should trigger a sound effect to emanate from 2 holes on the chest. In this case they are incorporated pretty well into the logo design on his chest. it's not noticeable from a distance at all. The batteries,(watch-type), are in a screw on panel in the back, which does detract from the look of the figure somewhat, but only from the back. Unfortunately you need to slam the crap out of the figure to get it to work. I thought mine was broken for a while, (see video), since I don't make a habit of slamming my toys so hard I fear breaking them. It fails both as a neat extra for collectors and as a play feature for kids. 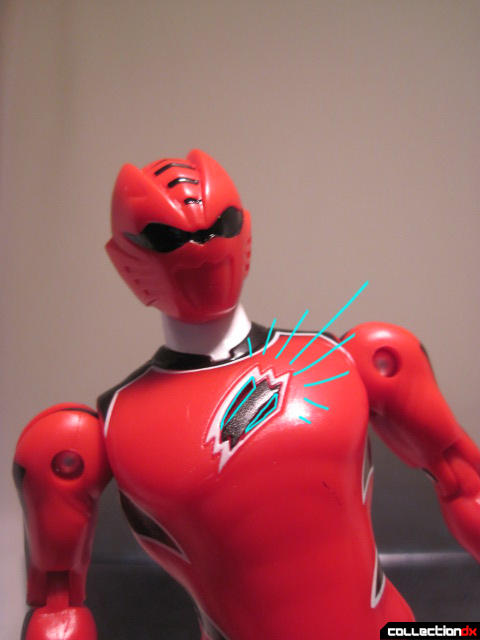 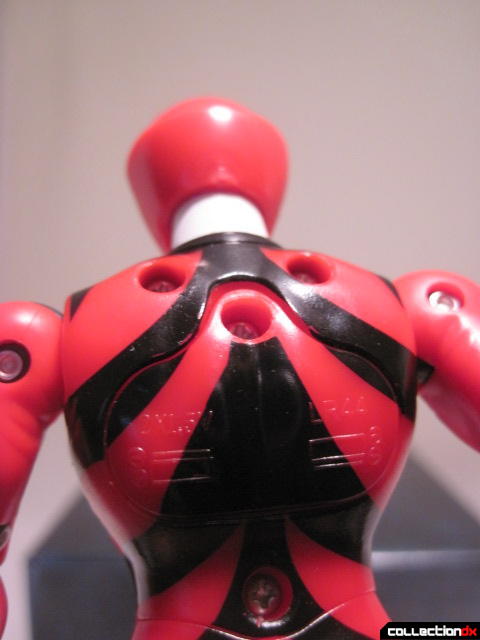 For those that care, here are the instructions he came with: 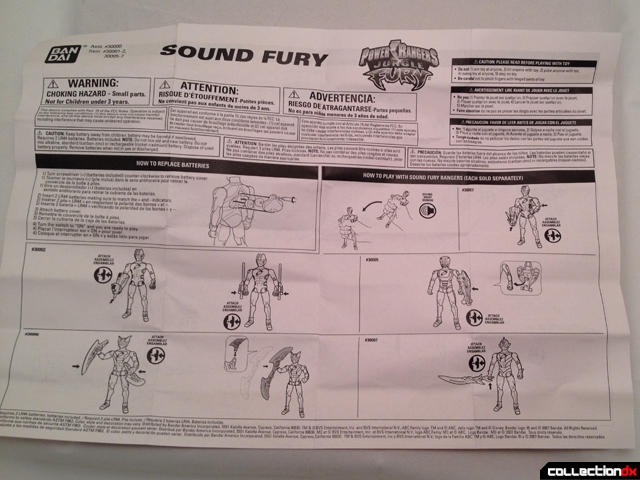 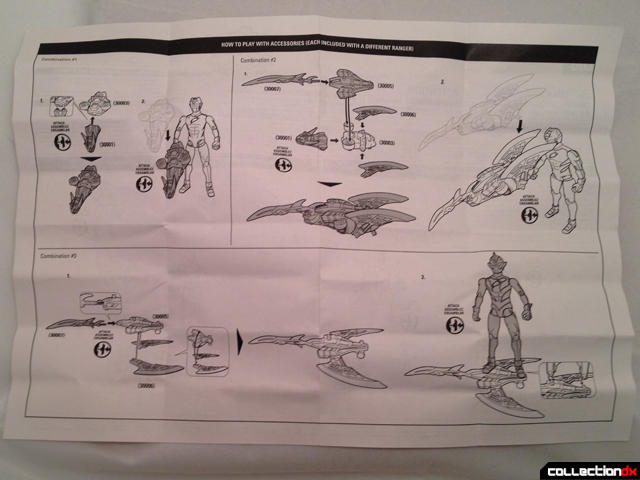 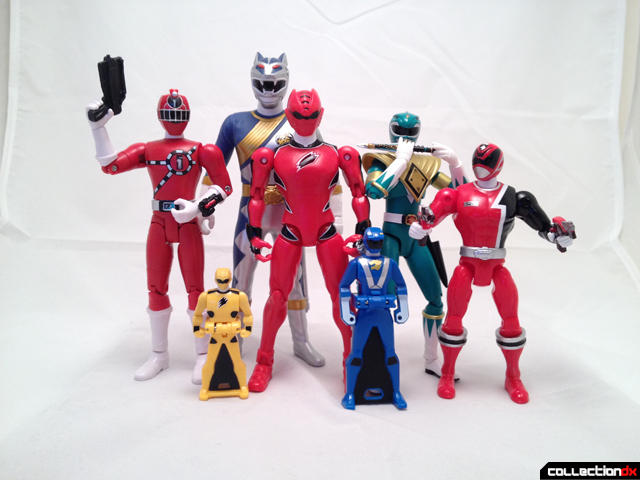 Here his is on display with my other PR/sentai stuff. 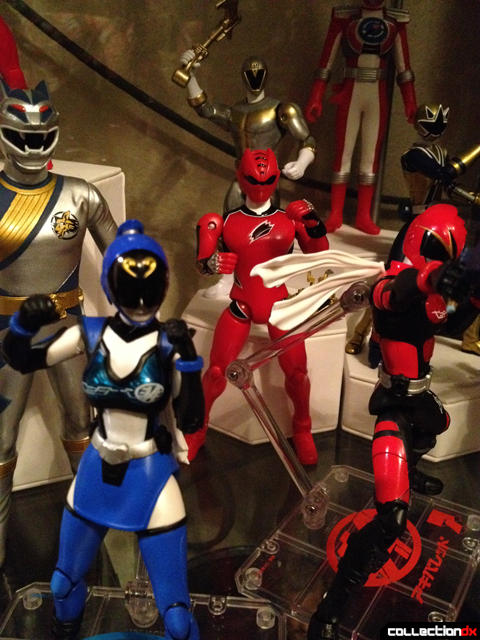 Overall, he's pretty good for a $10.00-15.00 figure. You get your money's worth. I would not pay too much over retail for him, unless you are a die hard Jungle Fury fan. I also wouldn't buy him for the sound gimmick.

Pros:
Still Affordable (as of November 2014)
Not too muscular
Nice paint/bright colors
Lack of waist gives him a sleek look
Nice proportions
Cons:
Mine had a paint errors
Accessories are molded 1 color and not show accurate. Chucks have kind of weak design.
Head and waist are not articulated at all.
Sound feature is garbage/holes in chest.
On mine the left hand kept popping off.

I have fond memories of this line. Finding all those rangers on store shelves was quite a hunt. Easily my favorite series from a figure perspective, though I am sure my affection is colored by my sons' love for the show.