Damn is this box big! The package is in the standard Saint Cloth Myth book style box but is thinner and longer than the biggest Saint Cloth Myth I have previously handled and that is what I would expect after getting to know the quality and caliber of the Saint Cloth Myth line, besides it’s not every day Bandai releases a God Cloth. Heck, even the trim detail on the box is printed in a silver foil to mark the occasion. 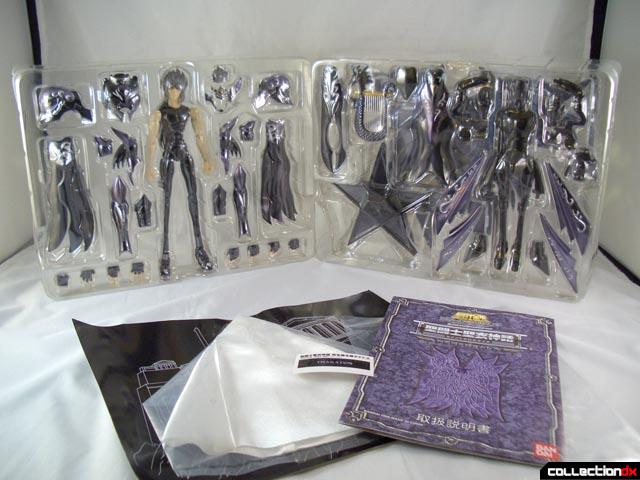 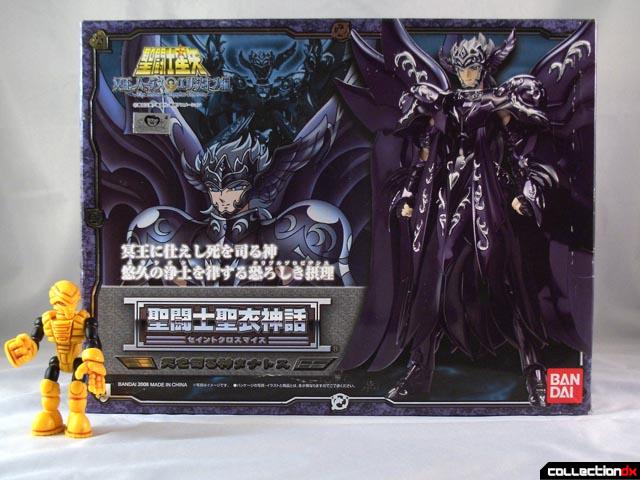 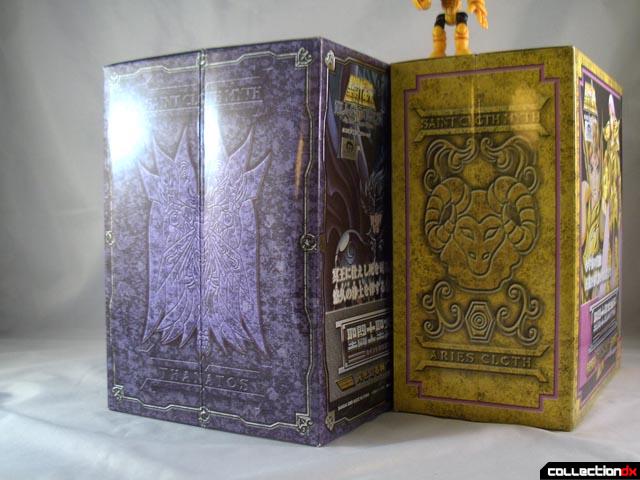 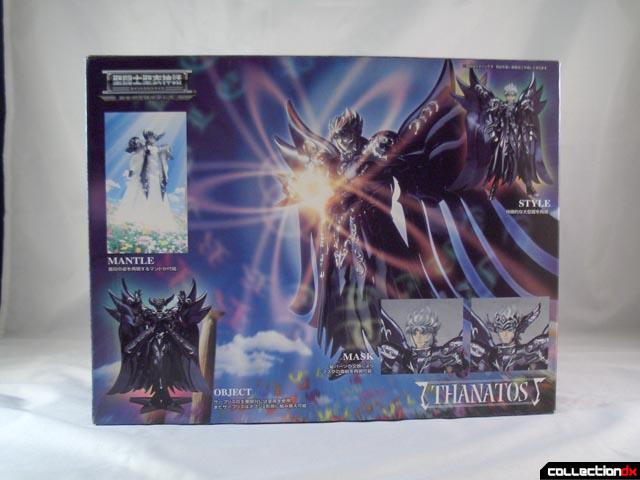 Thanatos is the God of Death, a villain from the Saint Seiya OVA series, The Hades Chapter – Elysium and hands down one of the best character designs to emerge from the series to date. Thanatos and his twin brother Hypnos stand between our Heroes and rescuing the imprisoned Goddess Athena. Thanatos only appears for 4 episodes but his short appearance is wrapped up in one of the most dramatic developments of the series, Pegasus Seiya’s Bronze Cloth evolving itself into a God level Cloth (coming soon from Bandai for the Saint Cloth Myth line :).)

The basic figure of Thanatos is much like the previous releases in the Saint Cloth Myth line - over 40 points of articulation, made of plastic with the feet being die-cast metal. The face sculpt is excellent and a great likeness of the character from the cartoon. 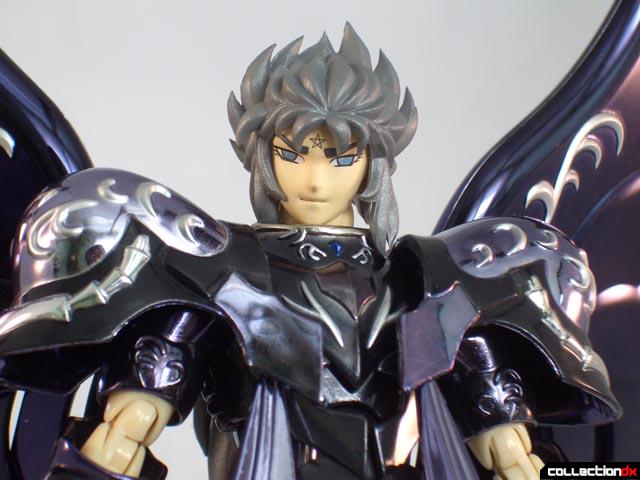 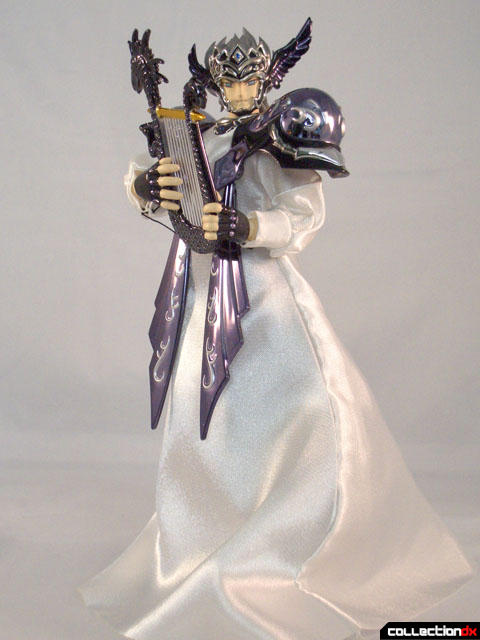 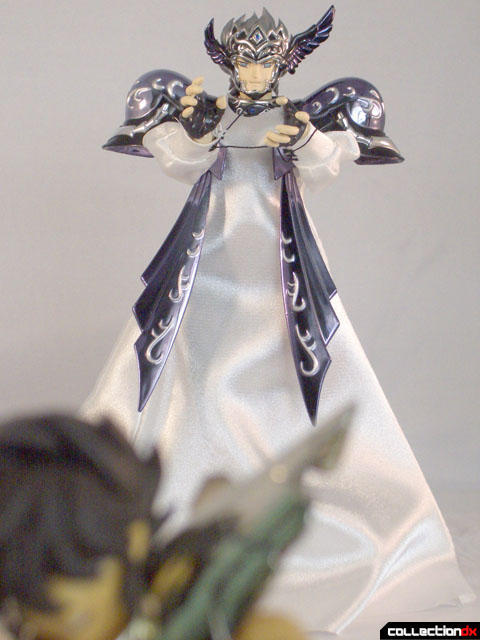 While all of this is nice, it is the full armored figure most folks are interested in and this one is a beauty! Whether you are a fan of Saint Seiya or not it’s hard to deny this collectibles presence on the shelf. The figure is about 50% die-cast and 50% plastic. Normally die-cast content is higher in a Saint Cloth Myth figure but the figure is so large it wouldn’t stand if they made more of it die-cast. 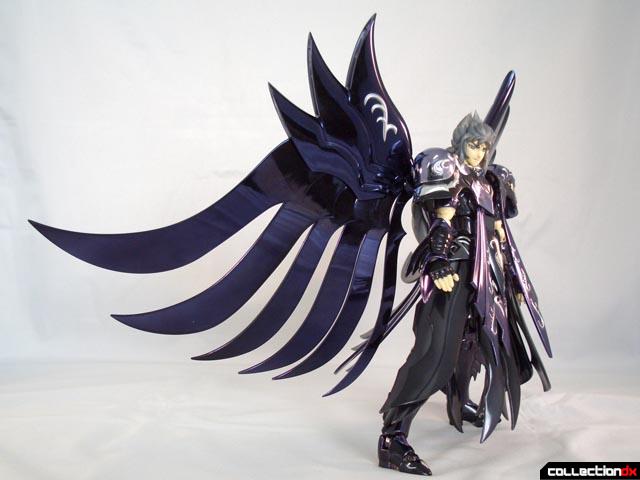 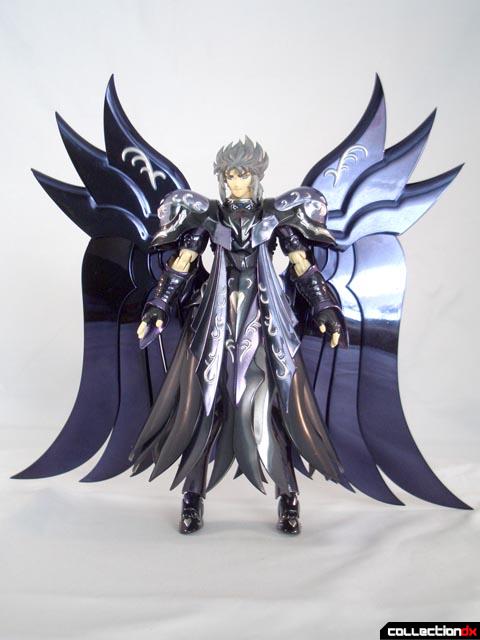 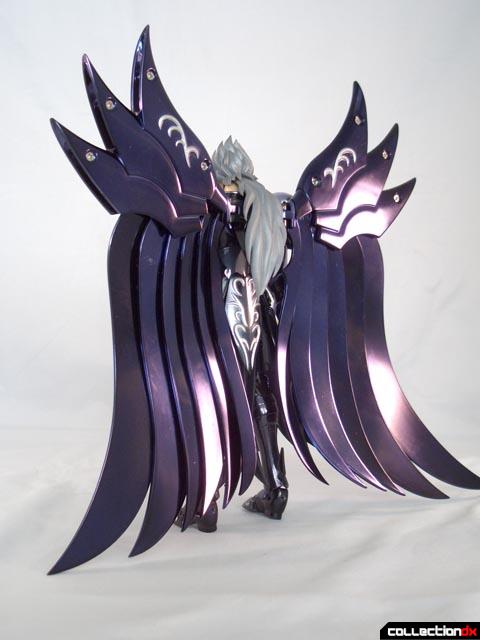 The Chest, arms, legs, cod piece and hip pieces are all diecast. The skirt details, helmet and wings are plastic. The wings do pivot and rotate as well as able to fan out. The wings are beautifully designed and really make this display stand out. The figure does stand on it’s own without support with the wings on full display but to keep balance display options are limited. Bandai makes an aftermarket stand for the line you might want to consider getting when purchasing this figure if you want to display him dynamically. 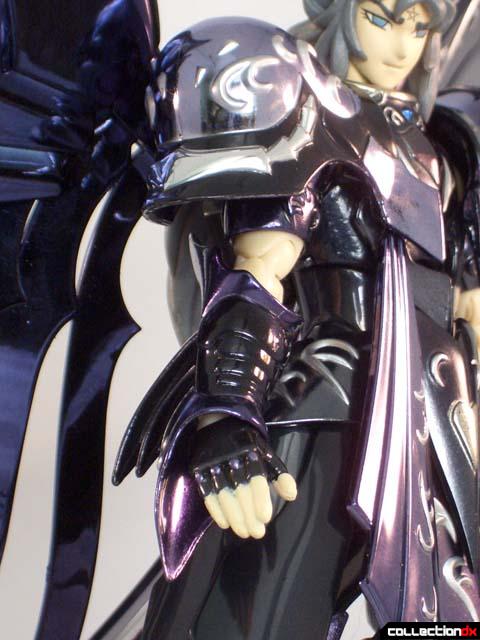 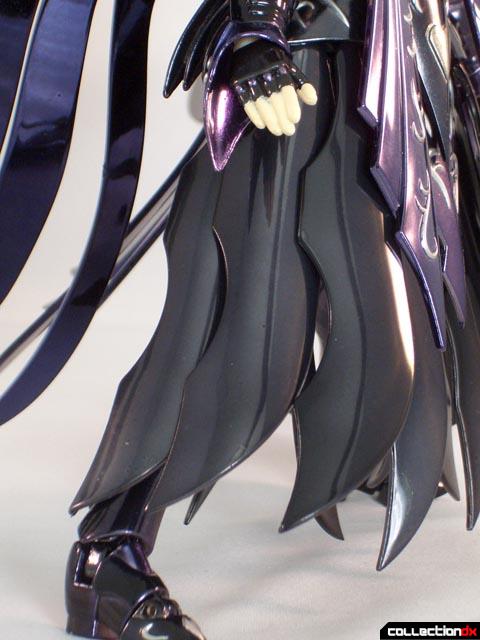 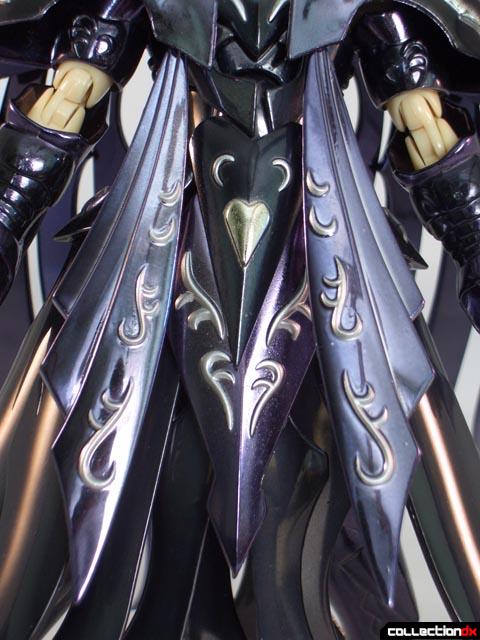 Now most Cloth’s will form a statue of the Constellation they are aligned with but the God of Death is a bit different, the statue is basically just the Cloth on display on a “dummy” body and not an actual object or item. As of now this is how I have the armor on display because the “dummy figure” locks into the base allowing the wings to be fully out, giving the piece a very dramatic look. 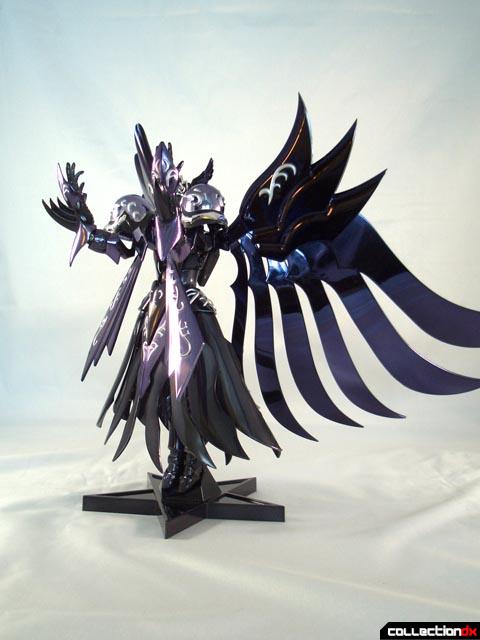 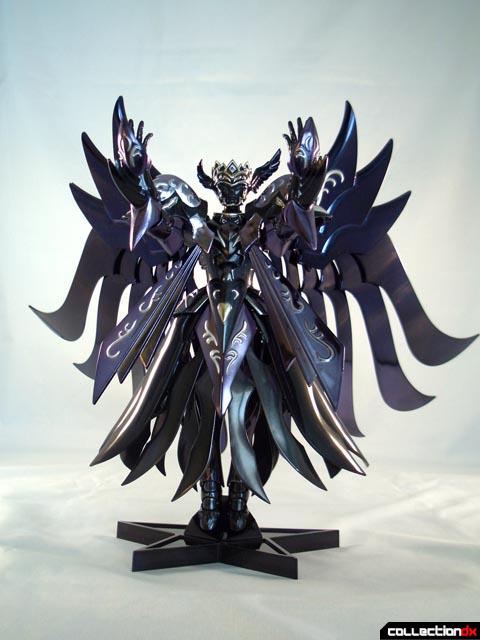 There is not much else to say about this fine piece other than get it! It meets the usual high quality of previous released Saint Cloth Myth figures and looks absolutely stunning. Fan of the show or not I am totally recommending you get one if you can, you will not be disappointed.

Full video review is below…

Maybe I'm just nuts, but I think I'd actually display it with the robe on. It reminds me more of an old fantasy wizard character. Maybe it's the head-dress but it makes me think of "The Lost World Of The Warlord" or "Diablo" and stuff like that, which I used to love. Otherwise, this sure does look like a nice, intricate figure.

I'm definitely digging this figure. I dunno if I'd display it with the robe, though. I'd definitely lose the weird headgear. Just not feeling it. The full armored look with the bare head looks more interesting to me.

Gad, could this be the figure that tempts me over to the dark side? aaaahhh

I've glanced at these at places like Angolz and Toy-Wave before, but never really gave them more than a passing thought.

This guy looks really cool though. Damn. I didn't even realize they had die-cast content, either.

never seen any of this show but this is one cool toy reminds me of microman stuff (or at least how it used to me)
Transformer and other robot art by me on my DA site blitz-wing.deviantart.com

I really enjoyed the musical montages at the beginning and in the middle! Oh, and using an Onell Design figure for scale is classic! :P

Hey, just a random question about these figures: are the bodies/armor interchangeable? Like, if I liked a certain character but wanted another characters armor on him, would they be compatible? Or would it depend?

Atom, I want to thank you for all your great reviews on the Myth Cloth series. Thanks to you, I have started collecting some of the figures. So far I have Thanatos, Saga, Kanon, and Andromeda Shun (v2 and v3) as well as Hades Shun. Thanatos is by far my favorite and I am anxiously awaiting the release of Hypnos. Do you have the Rhadamanthys Myth Cloth? I think that should be reviewed next, maybe then I'll buy it, finally. Keep up the good work. Much obliged.

Daivy- whats the difference between the metal plate version and the regular version why such increase on the price does it have more pieces??