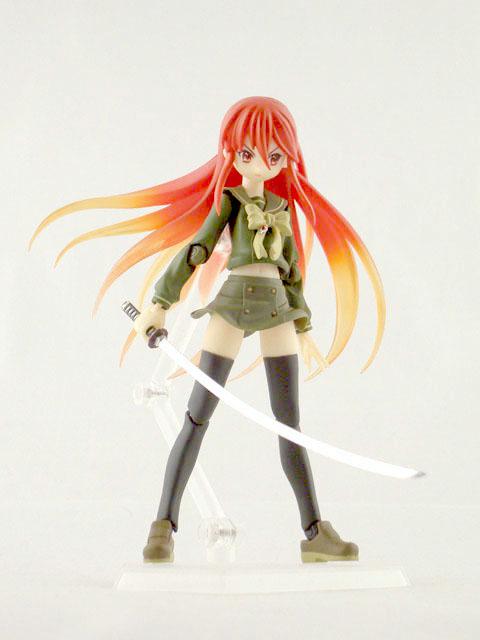 Shakugan no Shana started as a series of light novels released in Japan in November 2002, the manga series was created in February 2005 (again in Japan). The Anime version was adapted and aired in Japan between October 2005 and March 2006. A second anime series was aired in Japan in October 2007, titled Shakugan no Shana Second. Viz Media released the English translations of both the light novels and the manga series beginning in April 2007. Geneon Entertainment licensed the American anime tv series and released the first DVD in September 2006. They then withdrew from the American market, causing the DVDs to go out of print. Genon signed an agreement with with Funimation Entertainment in July 2008 to distribute select titles in North America. This series also boasts; two video games (one ps2 and one DS,) an OVA, an animated film and action figures. 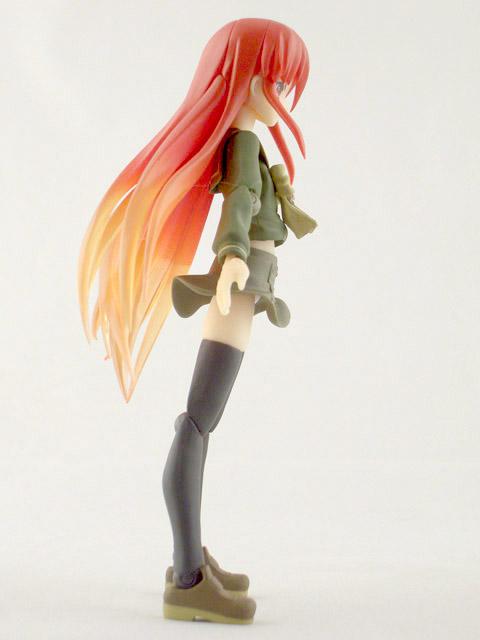 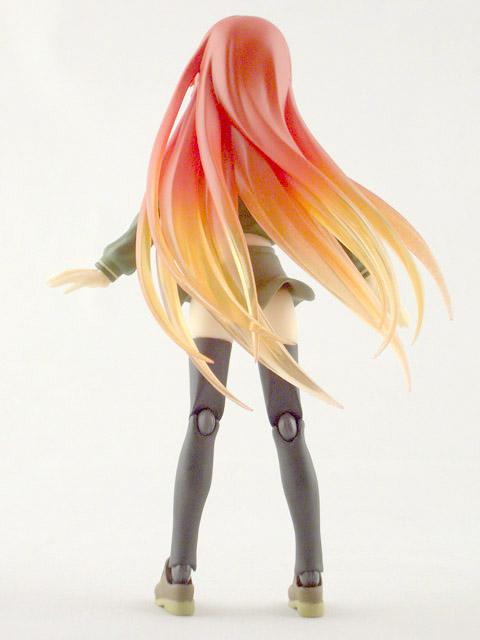 Shana is the flame haze contracted by Alastor (a Crimson Lord) to hunt down the crimson denizens (bad guys) abusing their power and causing the world to distort. This no nonsense tough girl calls it like she sees it without pulling her punches for anyone. She has a habit of saying "Urusai! Urusai! Urusai!"to Yuji (translates "shut up! shut up! shut up!") because he often says things that challenge her view and perspective. Her only softness lies in her love for melon bread and a fondness for Yuji. 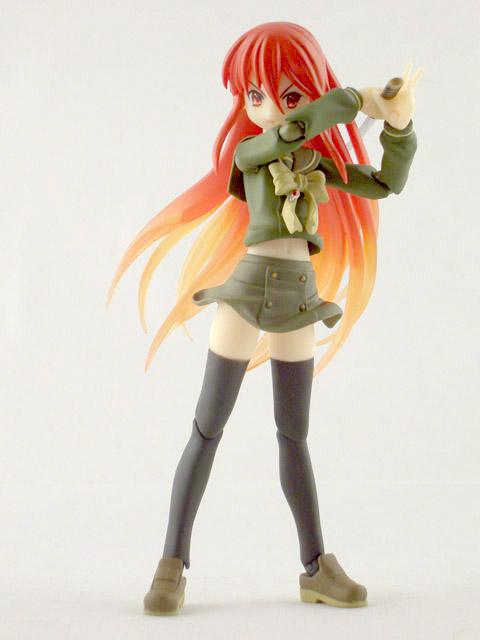 In an effort to humanize her, Shana is given her name by Yuji Sakai (the main character of the series) when he discovers she doesn't really have a name but is differentiated from the other flame haze by being called "Nietono no Shana" (the name of the longsword she carries.) The sword she received in her first battle as a flame haze against a mistes named Tenmoku Ikko. 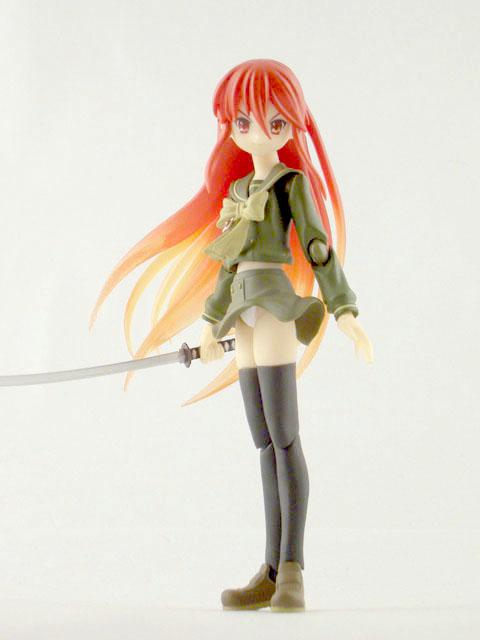 Shana was orphaned as an infant and adopted on a whim by Wilhelmina (another flame haze) and Alastor. Raised in a Tendou-kyu (road to heavenly place) she was trained to fight by Shiro (skeleton dude who has history with Alastor's previous flame haze. She extracts three promises from him after defeating him in battle.) [This story is told in anime season one in episode fourteen through episode sixteen.] 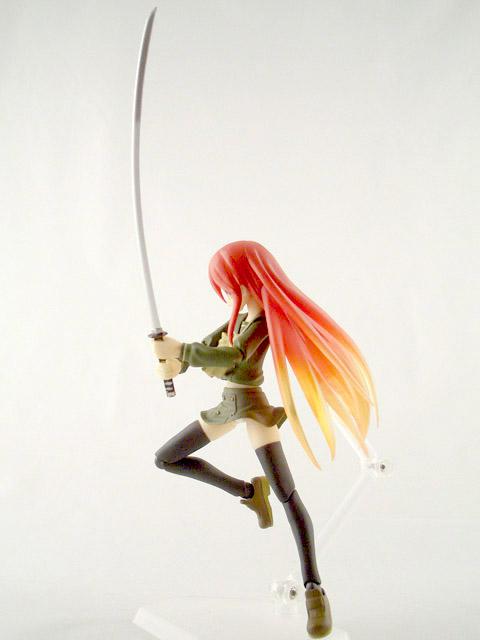 Shana does not leave the Tendou-kyu, but whenever Wilhelmina goes out she brings back a package of melon bread for Shana as a treat. She has become quite the connoisseur of melon bread and is often critical of improper handling (whether in the baking or consumption.) When it comes to teachers she has no problem speaking her mind or standing up for herself. 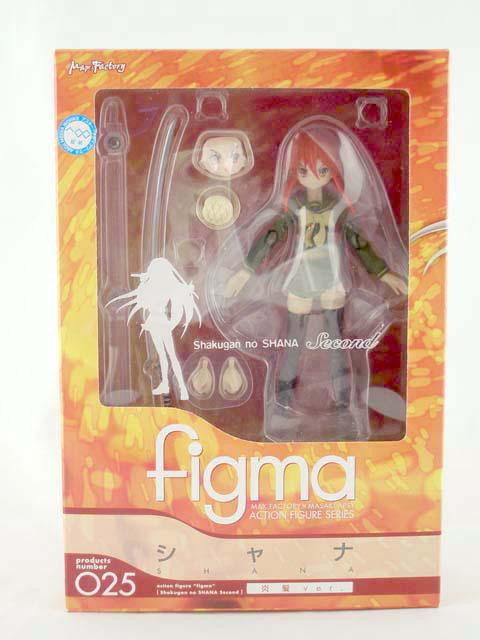 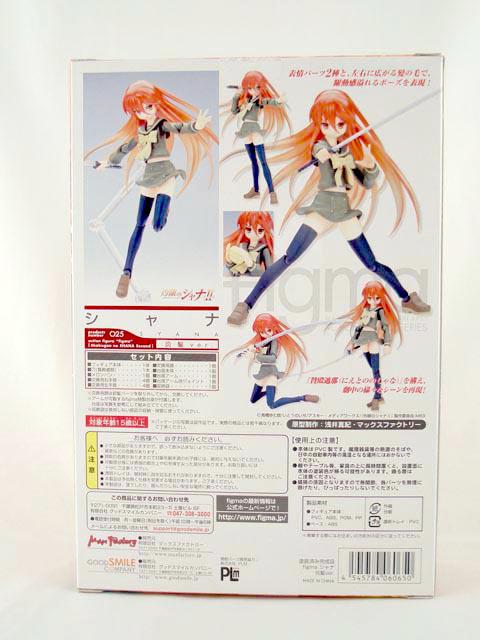 The package is a basic shadow box showing - figure, alternate expression, melon bread, Nintono No Shana, one of the alternate pairs of hands and the arm of the stand. The front and four sides have a shower of sparks in the background similar to Shana's aura. 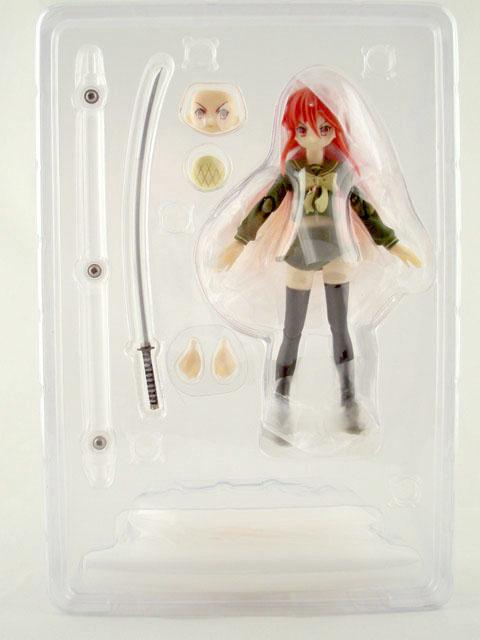 The more I play with her, the deeper I fall in love. For best results when posing her, use the little piece that attaches to the arm of the stand that looks like a shaving cream can with a long nozzle. It allows the arm to fit under her hair. If you then position the arm directly behind her and a smidgen to the left (from the front) you will find that the arm slides conveniently between two sections of hair (this is important, if you don't want her to be looking down all the time.) 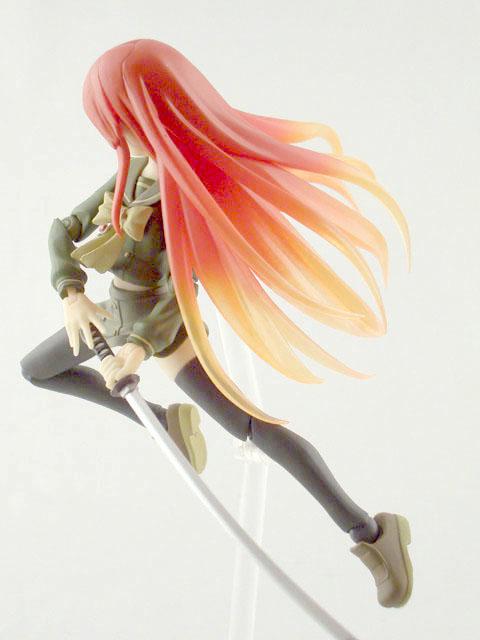 True to life, (I know from personal experience) Shana's long hair is beautiful, elegant, and a total pain in the butt. Even with the articulation on the sides (yes you can pose her hair too!!! ) it never seems to do what you want or stay where you put it and it seems to get stuck on everything form her sword to the arm of the stand. However it adds such life and realism to the figure that I wouldn't change it, just be prepared to be frustrated (and watch your fingers, her luscious locks are sharp.) 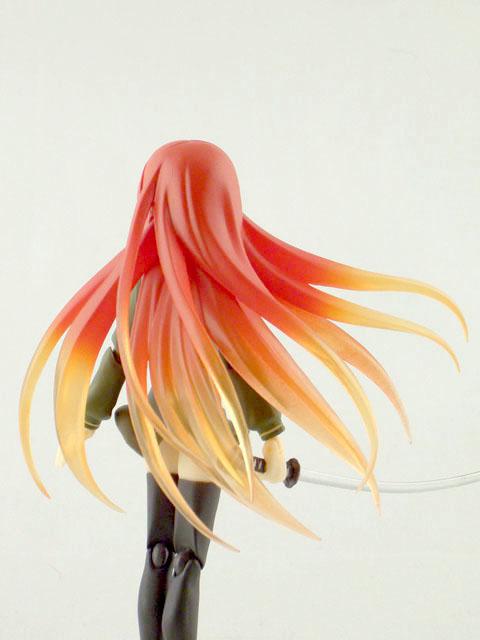 What I really like about this version of Shana, is that she is done to scale. Her sword is "As long as the girl was tall." Also she is small and young in appearance "couldn't have been more than eleven or twelve years old." [The Girl With Fire in Her Eyes, pg.23] 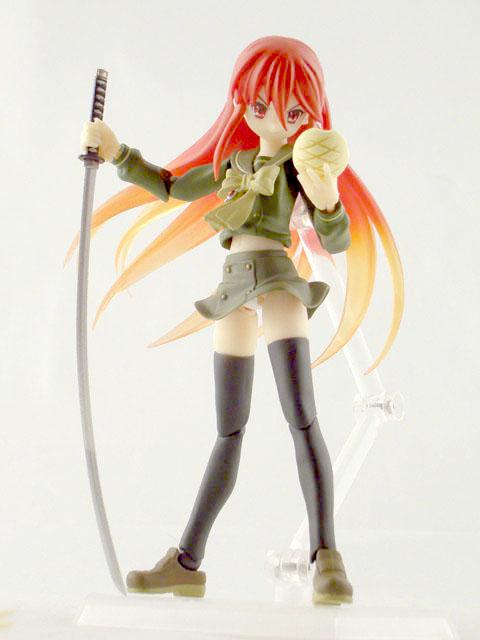 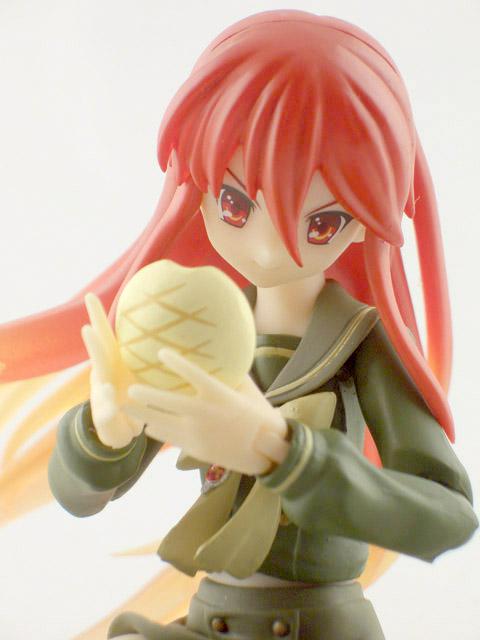 *** check carefully, one of the sword holding sets of hands has a bigger more oval hole in the back (by the pinkie finger) than the front (by the thumb) this set is for holding her sword backwards, if you try to insert the sword from the front, it won't work. This set is the one visible in packaging but not attached to the figure. This is not made obvious as there is no pictures on the package with her actually holding the sword backwards, but trust me, it works. *** 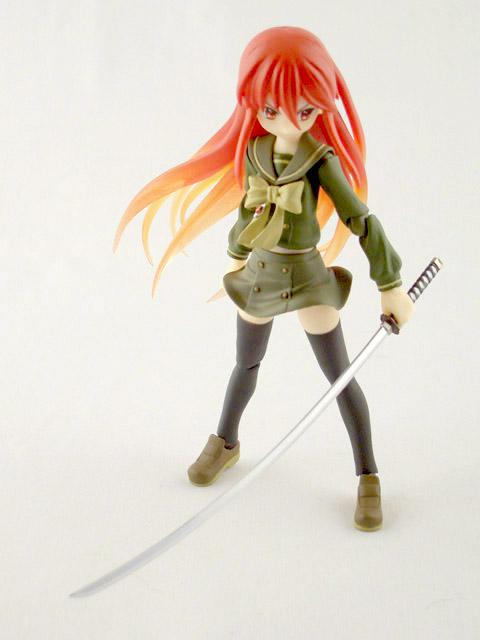 This pair is the most critical for getting poses that look like she just popped off a page of the manga, as Shana usually holds her sword behind her in either a high crossed forward, or a straight arm reversed grip. 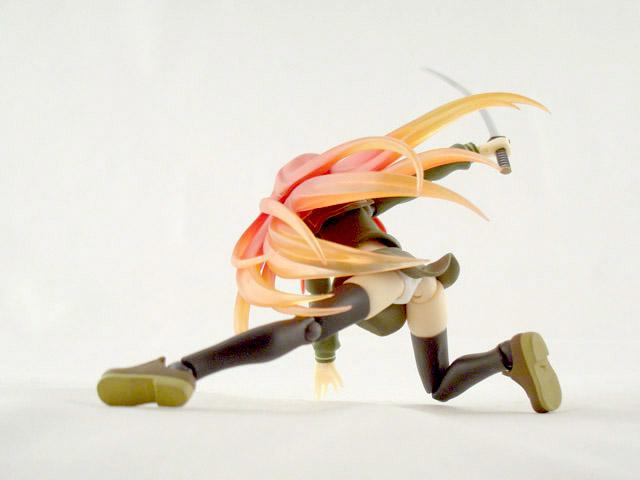 OK, you had to know this was coming and it has to be said, I don't like the fact that they left out her coat. "On her shoulders hung a weathered black cloak still fluttering in the wind from her recent attack." [The Girl With Fire in Her Eyes page 21.] Shana is rarely seen fighting without her cloak on, it's her magical weapon closet so to speak. Shana receives her cloak from Alistor (made from a piece of his wing) right after she becomes a flame haze and just before she wins her sword from her first fights as a flame haze. [Episode Sixteen of the first season of the anime.] Somehow without the cloak she is less "bad ass", more "Hey, look at the cute girl in the school uniform - sweet panty peek!" 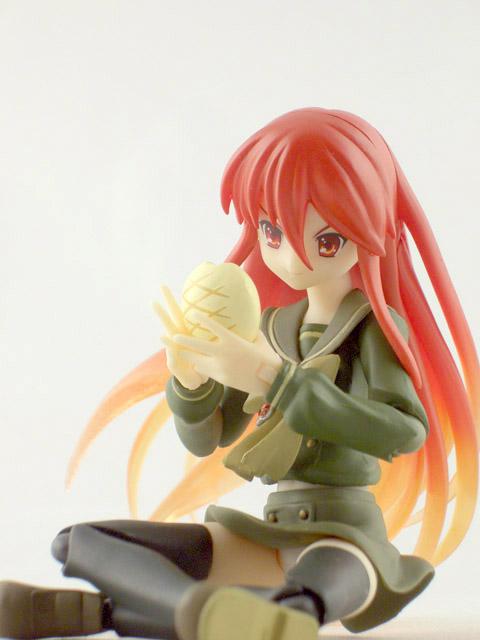 Having said that, They did include the melon bread.(although she has brown hair whenever eating melon bread) And she doesn't eat melon bread while wearing her cloak, so it does make a weird form of sense. 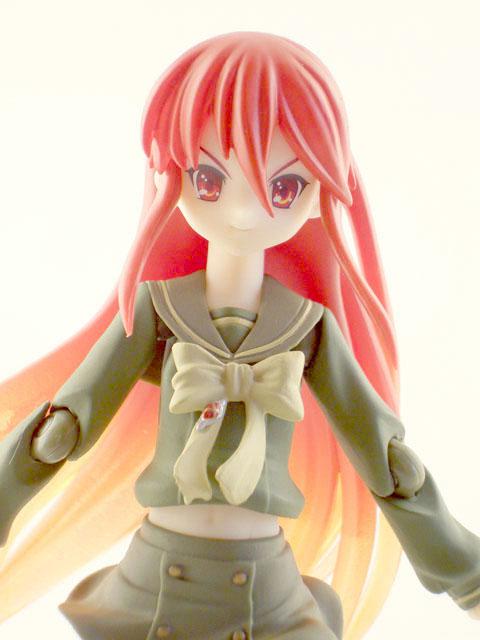 I think this is a great figure. It is highly poseable, easy to play with (almost Siren proof!), and true to the character. As a visual representation of the series it is a stunning piece. 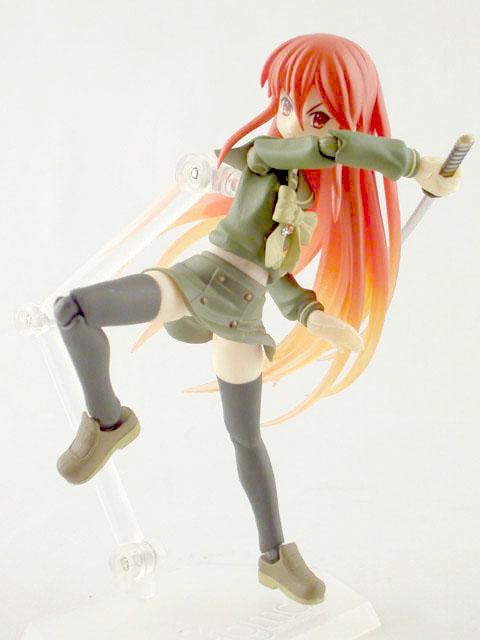