First off, if you haven't read my Hanuman review, please check it out first. Besides breaking down that particular toy, the article also details what makes these toys so special in general, and it reveals some cool information about myself!

In this review, I'm just going to focus mainly on the faults and merits of this action figure. Rama belongs to Series #1 of Kridana's Epic Ramayana Series of Hindu mythological figures. As you may have guessed, Rama is the eponymous main character of the two-thousand-year-old Hindu epic poem, the Ramayan. 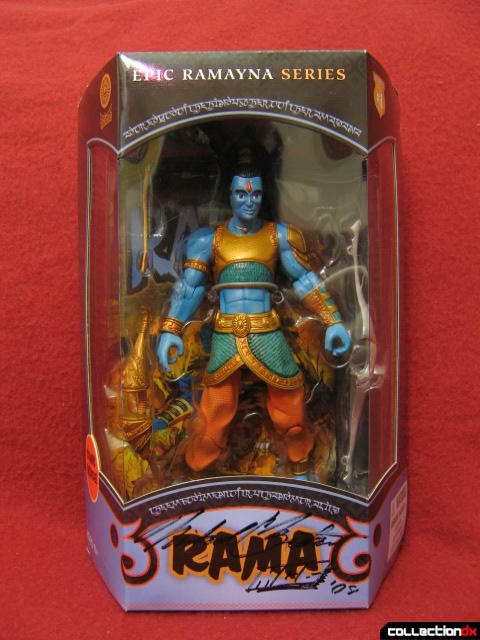 The Ramayan details the rise to power of Rama, the would-be king of Ayodhya and incarnation of the god, Vishnu. The eldest son of King Dasharatha, Prince Rama is sent into exile for fourteen years with his wife and brother, Lakshman. Sita, his wife, is kidnapped by the demon-king, Ravana, and Rama, Lakshman, and Hanuman, his devotee, must organize a war against the demon army to rescue his wife and shatter their empire.

Rama represents a sort of "perfect man" in Hindu ethics. Similar in concept to Confucianism, he's a paragon of righteousness, compassion, honor, and all that other good stuff people are supposed to strive towards. He's a true hero in the fullest sense and he brings out the best in those around him. 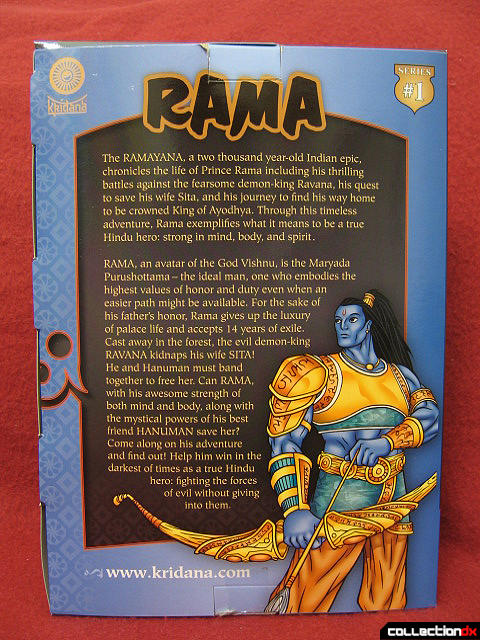 Again, in this review, I'm going to focus on the toy. If you've read my Hanuman review, you know how fantastic that figure is. So, by comparison, how does Rama fair? 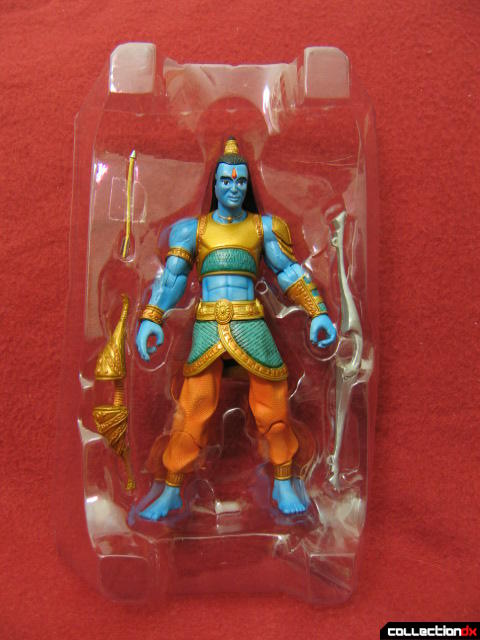 Not quite as well, unfortunately.

Granted, this may be the first mass-marketed, high-quality children's toy of one of the most important figures in Hindu mythology...ever...but it seems to fall a bit flat on some levels.

Let's start with the packaging. Just like with Hanuman, it's a very nice window box with multi-colored graphics on it and a brief summary of Rama's life on the back. The figure is housed in a plastic tray with a twist-tie. And, yes, we have mini-comic! Very cool! 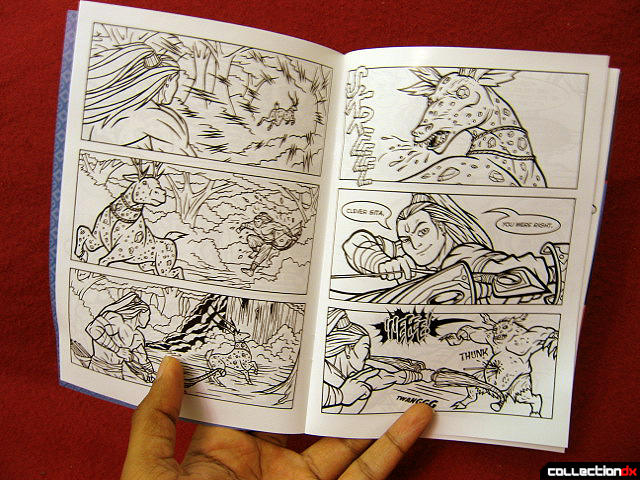 The figure and accessories, however, are just okay, in my opinion. I'm guessing that Rama was actually designed well before Hanuman because the overall quality difference is stark. I have feeling that Rama was done first, as he's bound to be the more popular figure, but that all the kinks in the system were worked out by the time Hanuman came around.

Anyway, let's first talk about the sculpt. Rama's face looks okay, but some have commented that it looks a bit too doughy. His expression looks a bit blank. Next, his anatomy...his arms are absolutely diesel! The juxtaposition seems odd to me: he has a very gentle face, but then his arms and hands look like he crushes cars for a living. Seriously, they look like He-Man arms. Not only did they sculpt all the striations in his muscles, but there are even veins molded in there! 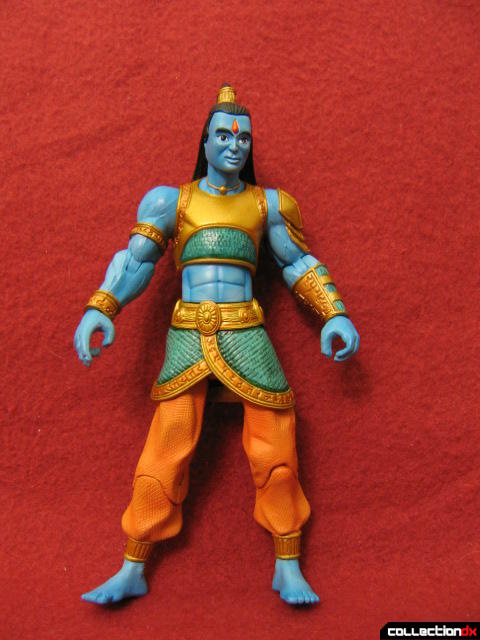 Meanwhile, his chest isn't particularly beefy. In fact, the rest of his body is rather lithe in form. Then again, there are those abs. It's like someone completely different sculpted his exposed abdominal muscles--they look too broad and grid-like. Definitely out of place compared to the more realistic (albeit, inappropriate) body-builder arms.

I must say, though: the armor and clothing was done very nicely. I love his pants and bits of armor on the rest of his body. Also, the hair looks great! The color choices are excellent and the subsequent paint apps are flawless. 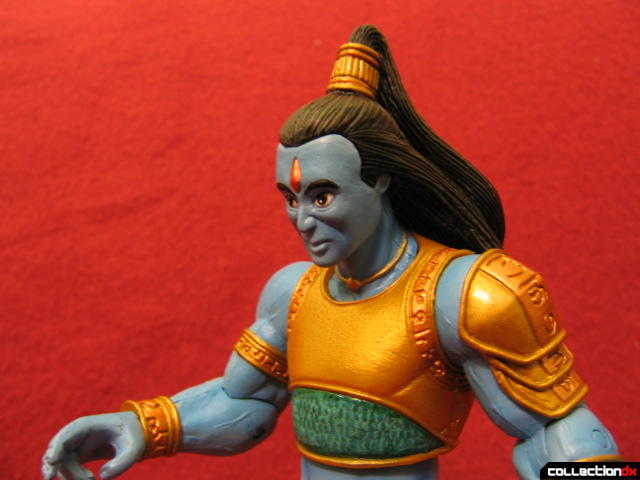 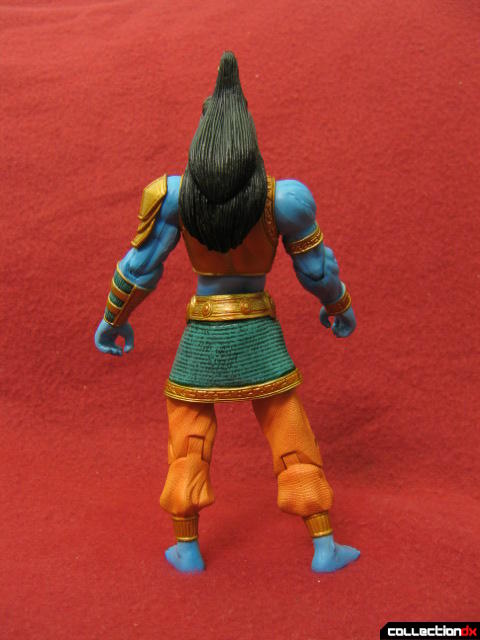 The skirt around Rama's waist is molded out of the same flexible PVC Hanuman's tail and tabbard are. Perfect! It contours beautifully as the legs swing back and forth. Well done.

And while we're on the subject, the figure's articulation isn't bad, but again, it's not quite as well thought-out as Hanuman. He's pin-jointed nice and tight at the knees and hips. This leads to a very stable figure, but the addition of joints in the ankles would probably help for more dynamic shelf poses (especially on such a top-heavy figure).

He's also pin-jointed at the wrists and elbows, and ball-jointed at the shoulders and neck. The head articulation, however, suffers greatly because of the hair. The way it's molded flowing down the top of his back, you can barely turn his head and almost can't tilt it up or down...thus rendering the ball-joint somewhat useless. 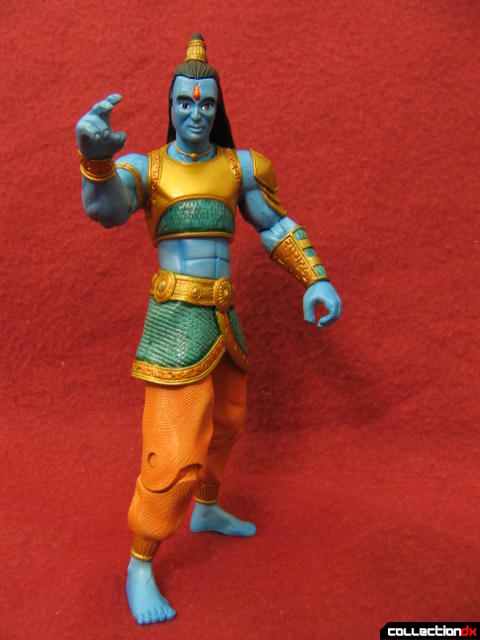 The waist articulation was a bit of a disappointment. Just above the belt, there's a pin joint that's actually rather loose. Maybe I just got a bad piece, but if you tilt the upper body backwards, a small gap opens up between the lower and upper bodies. Not great, but not the worst thing in the world. Next, there's actually an additional ball-joint in the middle of his chest, cleverly hidden by his chest armor. It's a really nice touch...in principle.

If any of you own Toy Biz' Marvel Legends Captain Marvel figure, you'll understand my pain all too well. For some reason, the designers of this figure saw fit to angle his neck very severely and unnaturally forward, while adding the mid-chest joint to allow the upper torso to tilt back in what I'm sure someone thinks is a very heroic pose. It's not. It kinda sucks. 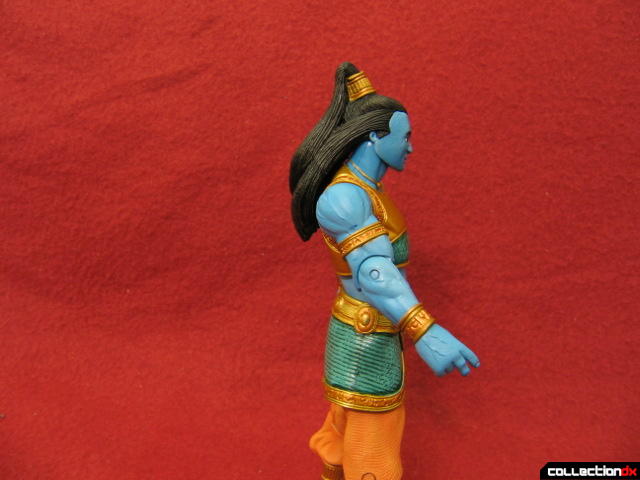 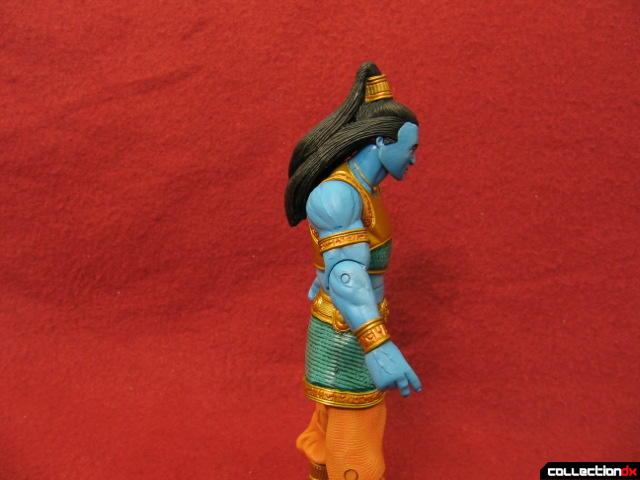 Dang, Rama could use a good chiropractor. Clear that right up.

That "recommended" pose with the chest and shoulders back make the hips look like they're thrusted forward like he has an arrogant swagger. Not exactly very Rama-like, if you ask me. And anything but that pose makes him look like he's staring down at his feet (not to mention, makes him tip forward too easily)...thus rendering the articulation somewhat useless.

A nice neutral stance would have been much more appreciated. And much less hunchback-looking. 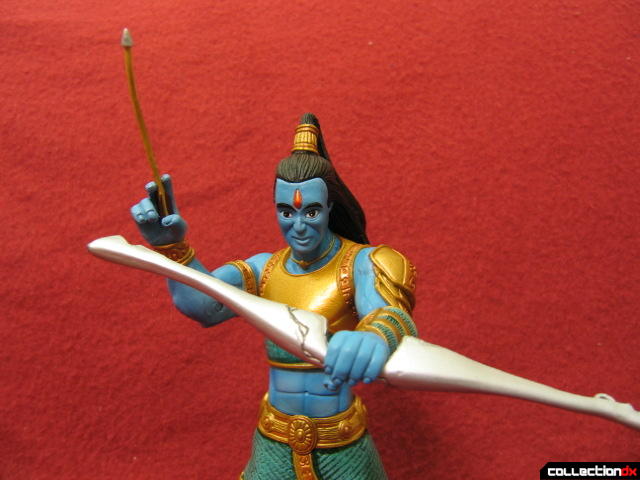 Next up, we have the accessories.

These are a tad confusing because we have no explanation for them in any of the packaging. Hell, I only knew about the cloudy peak of Dronagiri mountain that comes with Hanuman because I'm named after the damn thing! 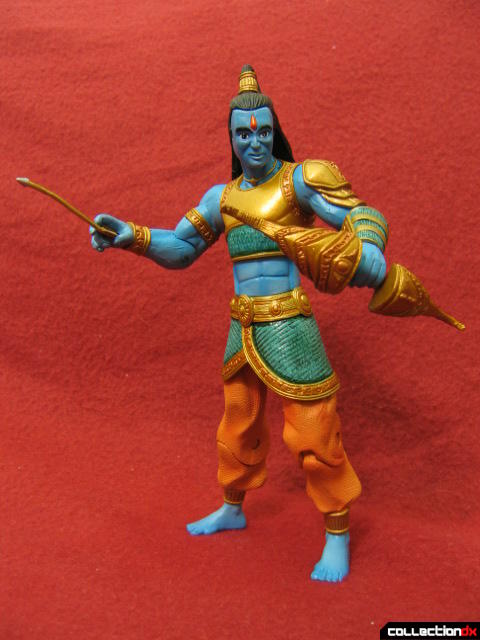 Rama comes with two bows and one arrow. I would imagine that one of the two bows is Lord Shiva's bow, one of the most powerful weapons on the planet. Rama was given the test of stringing the bow and firing an arrow with it during Sita's Swayamvara (suitor-selecting ceremony). Not only was he strong enough to lift the bow in the first place, he actually broke it in half in the process of stringing it!

I'd imagine that the other bow is possibly Lord Vishnu's bow, another divine weapon of immense power. Rama won this from the warrior-sage, Parashurama, when the latter challenged the veracity of a mere mortal, Rama, having broken the mighty bow of Shiva. Either that, or the other bow could be Kodanda, his personal weapon he carried with him throughout his life, symbolizing his vow never to attack anyone unless provoked. 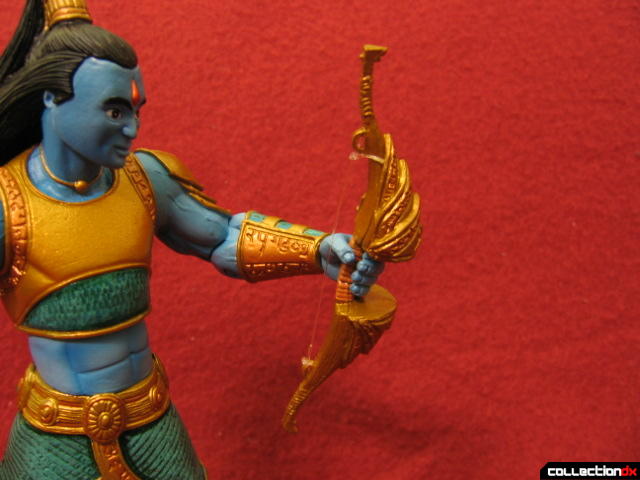 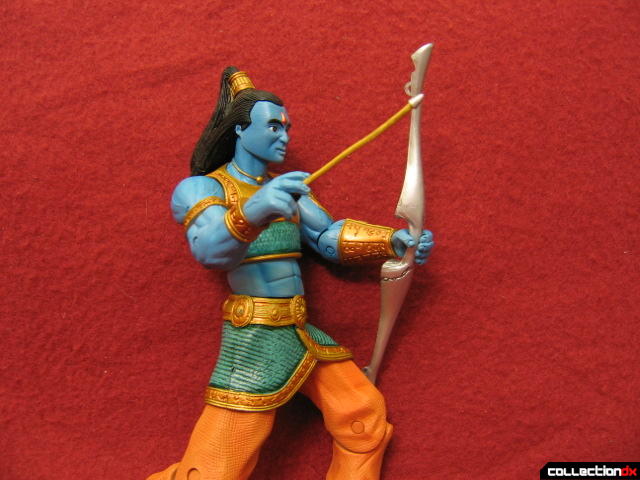 The only bit I found odd about these bow accessories is that if you look carefully, you'll notice that the gold one is actually strung. There's a thin, transparent elastic cord running between the hooks. The bone-colored bow has the same hooks, but there's no cord and I didn't find a spare one anywhere in the packaging.

Anyway, the arrow is nicely done because it can fit very firmly in Rama's right hand (wedged between his index and middle fingers). The only downside is that it's long, narrow...and PVC. Yup: it's bent. I'm sure on a hot day, it'll start to sag even more. ABS plastic or some equivalent would have been really nice here because of the material's dimensional stability. Oh well...I can always kitbash my own. 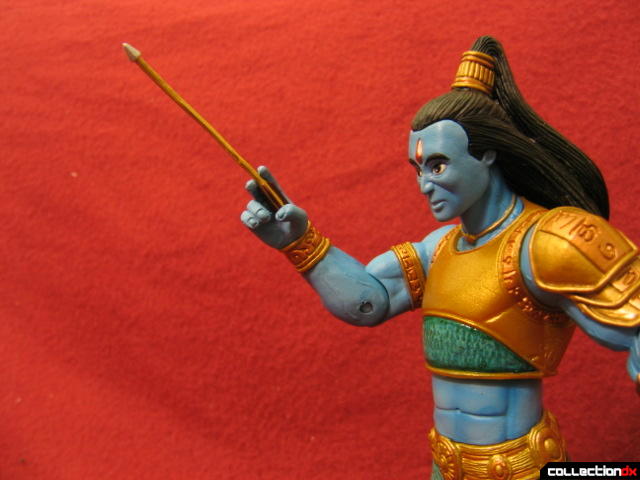 That pretty much wraps it up. As you can tell from this review, there're quite a few little annoyances here and there with this figure, but don't get me wrong. This is an action figure of Rama...the Lord Rama...from the Ramayan. The cultural significance of this really can't be understated. As an Indian toy collector, having this timeless hero in my collection means a lot to me.

Now, speaking as a toy collector first, what I would absolutely love to see would be a new figure done of Rama. First of all, he's the main character of the Ramayan, so having different figures--not just repaints--of this character in the toy line is by no means a stretch. A new figure could apply all the technological advances they made with Hanuman and offer a superior toy.

For example, they could do a "Final Battle" version of Rama from the showdown between him and Ravana. He could be kitted out in ancient wargear...or even be packaged with a chariot! It would be the perfect companion to the upcoming Ravana figure! As long as they address all these little issues with the design, they'll have a truly monumental piece. And based on the excellent Hanuman, I know they can do it!

Thanks for reading! These figures can be purchased at Kridana.com!

Speaking of Kridana, I believe not too long ago, Kridana had some kind of pooling about what figure that the consumer would like they to make. I choose for Pandava bros. Having Javanese Parents, Ramayana and Mahabarata is in my culture. And maybe like Sanjeev, I would like to have an Arjuna figure to play...

Agreed, I can find no fault with the Hanuman figure: gorgeous sculpt, well-designed joints, perfect colors/paintwork...all that. I'm gonna try talking Mahender from Kridana into making more Rama figures like I suggested above!

I didn't know you were from Java, Berserk! That's cool! And, yes, I'm hoping that the full Ramayan gets hooked up with toys and Mahender moves on to do the Mahabharat. Having a Krishna-Arjun set with his chariot would be amazing! Or, like you said, the Pandavas...along with a matching set of Kauravas to face off against! ;)

That would be awesome... oh, about the Pandava figure, someone I know custom Pandava figures from Marvel Legends figures. let see if I can find the photos.

Oh, that'd be hot! A Bhima customized from one of the stockier/musclier characters would be amazing. Yeah, post those pics if ya can!

Here are the pics... I don't know how to post pictures, so I just gave you the links. I hope it's alright. Sorry it's not clickable... maybe you can show me how?

I think using a revoltech based Pandava is possible.

HOLY CRAP, those are awesome, Berserk! Do you know who makes them? The main Pandavas are absolutely stellar. And to go through all the trouble of actually making custom packaging is so damn cool! Ghatotkacha is very nicely done, but I'd kinda like to have seen him more demonic-looking...and wasn't he supposed to be bald and armed with a mace?

Either way, those are great! Thanks for posting and let us know if you have any more info about these customs!

Oh, and by the way, CDX uses html to post things, so you can use the < img src = " path to image " > syntax (minus the spaces, of course). The cool thing about photobucket is that they give you the html syntax right there for you to cut and paste.

Freakin' nice! What else do you guys got hidden over there?

Oh, thanks a lot sanjeev, for making it right. About Gatotkacha, I think it's Javanese version of him. Maybe a little different from the original version. The guy who made it make the figures for his college task if I'm not mistaken.

Modcineaste, we got a lot of customizer. There's this guy that going to make Green Lantern Corps. His number reach almost 100, I think.

check this out Dude, to find out more about pandava five final packaging

Thanks for posting the link!