To learn more about Red Spectacles, I suggest you listen to this episode of Destroy all Podcasts DX.

My first exposure to this saga was from the 1994 Dark Horse Manga. All I knew was that I really loved the design of the suits, and I didn't understand that it was part of a larger world until I saw Jin-Roh. 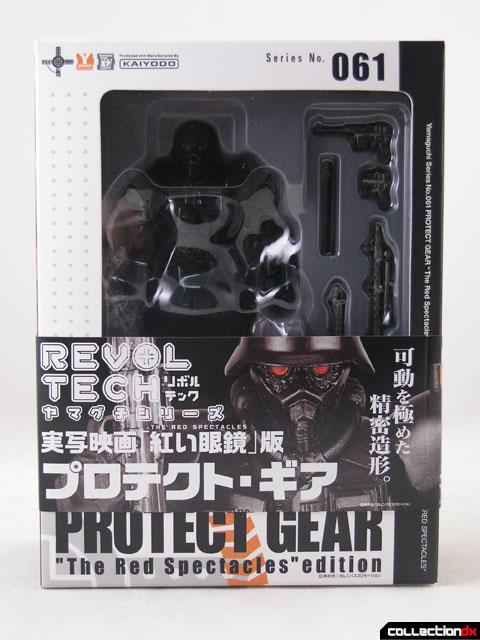 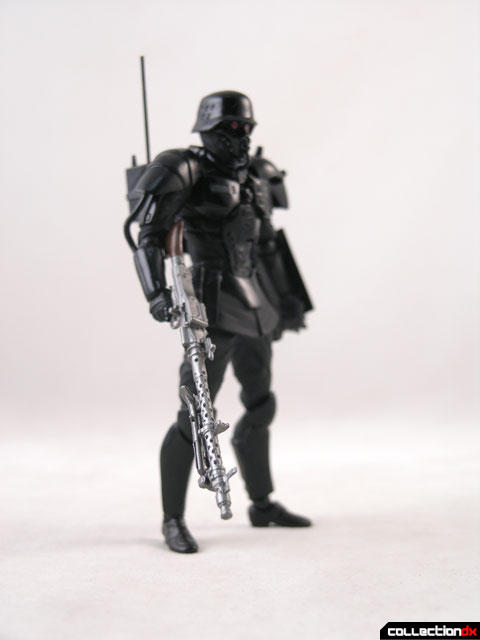 There have been other toys of the Protect Gear in the past, including a few 1/6 scale figures and a prior Kaiyodo action figure. I really like the look of the 1/6 scale ones, but they often ran about $200.

Seeing as how I like Revoltech, and I like Protect Pear, this is a no-brainer for me. At 12.5 cm there are 37 points of articulation, with ample use of the Revoltech Joint system.

Let’s start off with the figure itself.

The head is on your typical Revoltech joint, and the face has a rubber hose that goes into the chest. The hose limits articulation, but its not too bad. 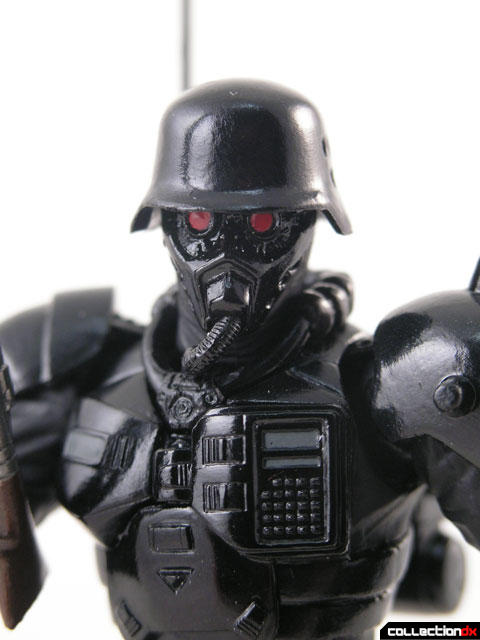 The shoulder pads are made out of rubber, and are connected by a loop that goes around the inside of the shoulder Revoltech joint. The right lower arm is connected to the upper arm by a Revoltech joint, and there is a rubber hose that connects the two. 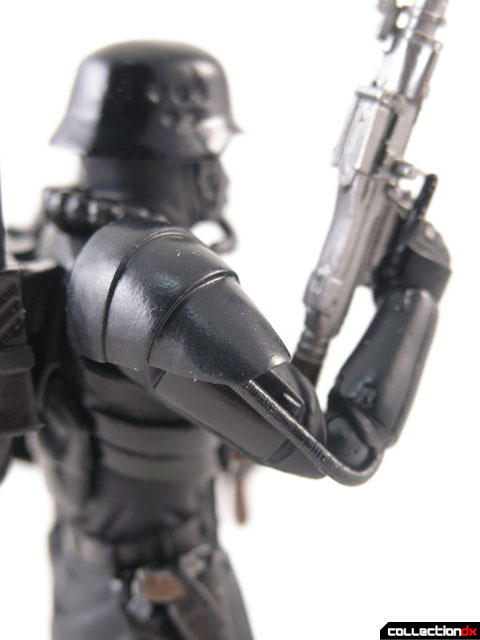 On the left side the lower arm has a shield attached to it. The end of the shield has a small tab on it to attach the half gun that gives the appearance that a gun is stowed behind it.  I actually popped my shield off when trying to put this part on and I had to re-glue it with superglue. 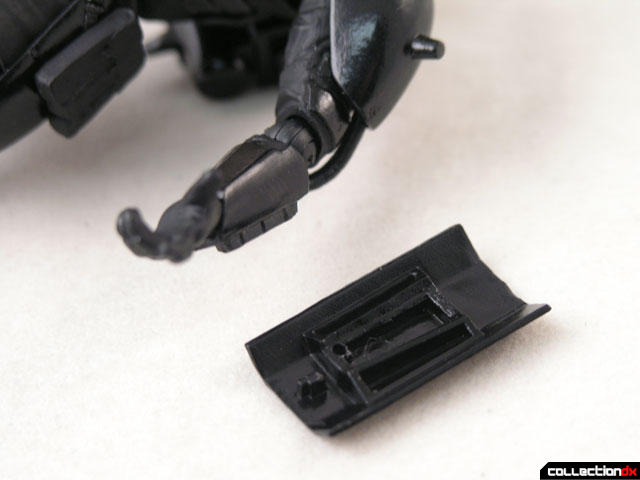 The chest has a Revoltech joint, but the hips are standard swivel joints. There are actually 2 swivel joints in each hip, and the flexible outer covering allows for a wide range of motion. On the right hip there is a holster with a non-removable gun. 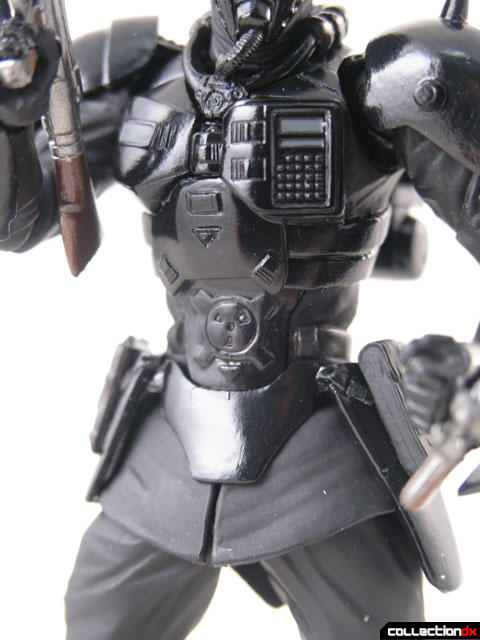 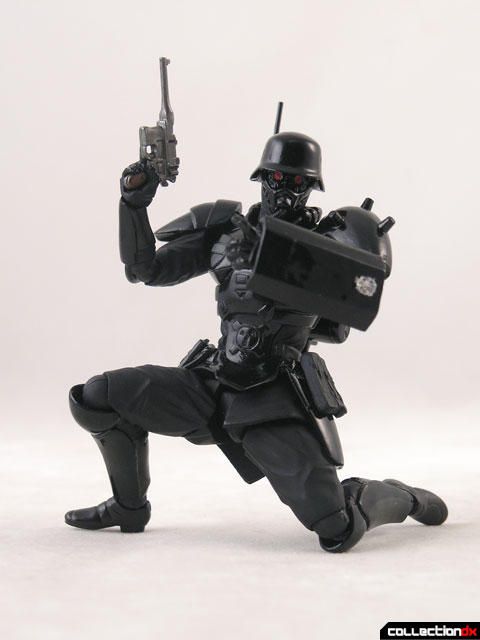 The rest of the legs and feet are pretty basic, with Revoltech joints in the knees and ankles.

The guns are all badass – one can only imagine the strength required to lug them around. The ammunition belt fits onto the side of the MG34, but doesn’t seem to go anywhere. On the 1/6 figures, the ammo fed from the backpack. 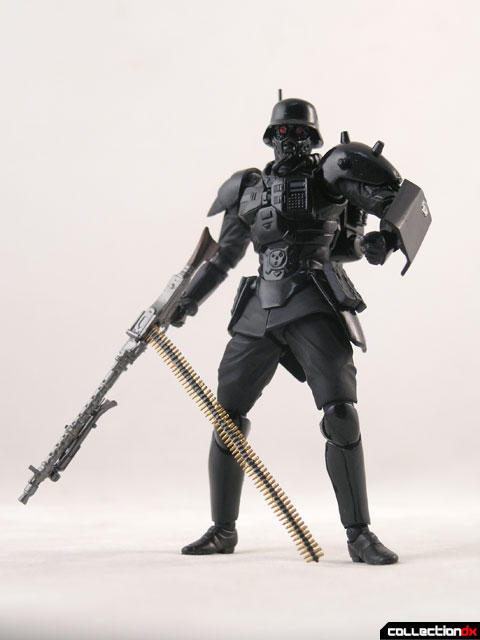 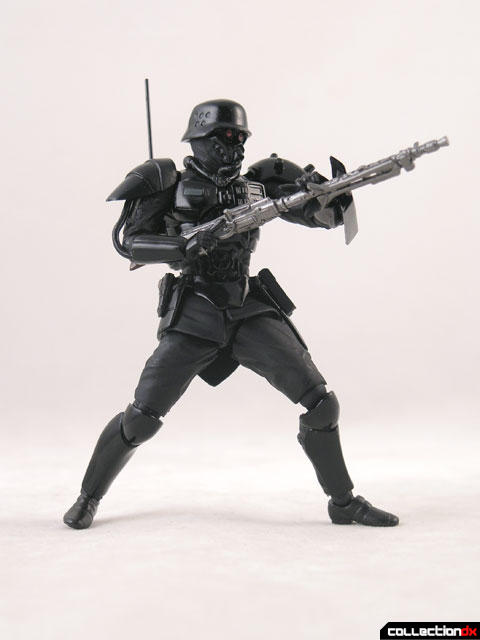 Two hands are gun holding hands, but instead of a curved trigger finger they go straight out. The other two hands are “holding” hands. 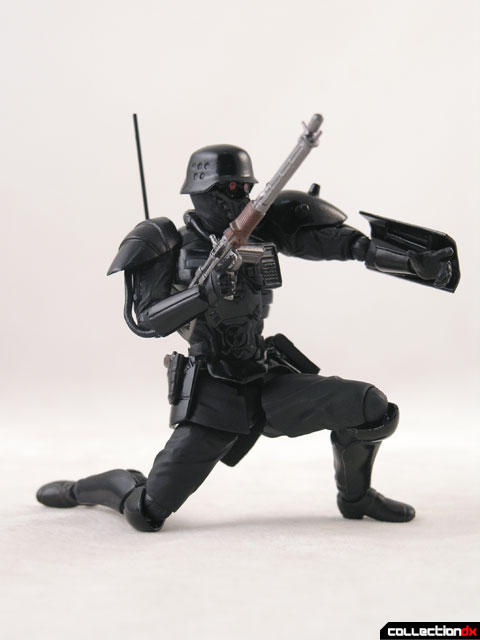 The base is the standard Revoltech base, only this time it’s only the “V” base and the small stand. The large joint arm is not included. 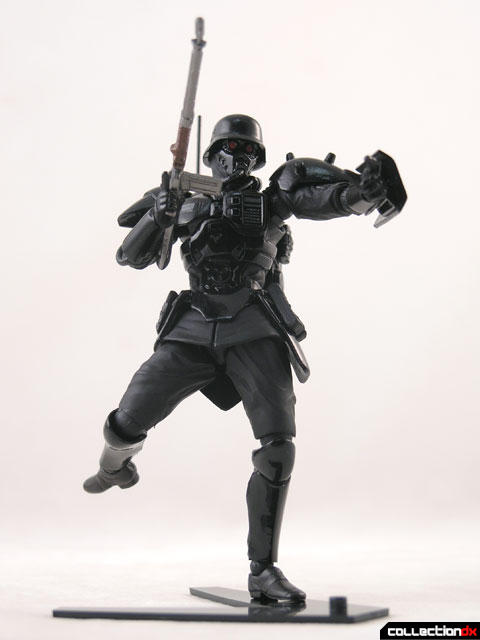 This is a great design. Its got the typical Revoltech quality and attention to detail, and I consider it a must-Have. Just be careful with that shield. 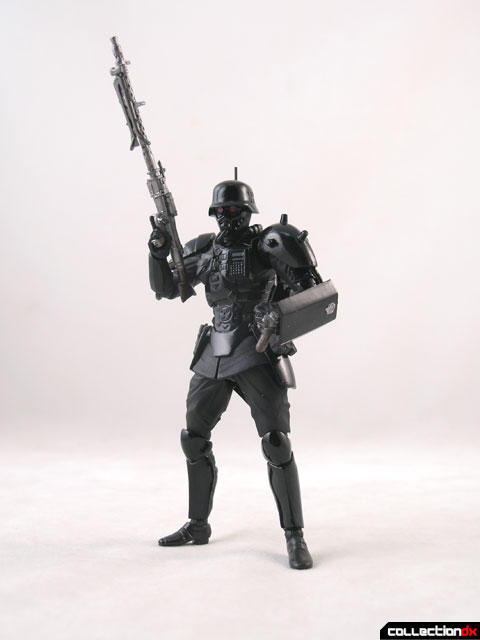 Want your own Protect Gear? Head on over to HobbyLink Japan.

I am really excited for this. The armor is hands down the best thing about Red Spectacles and I cannot wait to get my hands on this. I bet you Zuey will want one of these too.

Yeah! That's what I'm talking about!

I love the Protect Gear designs, too....but if this particular incarnation comes from after Jin Roh (presumably, the present, as in the Red Spectacles movies), then why's this poor guy lugging around WWII-era German guns? :P

Mine should be here any day along with Enki. Stupid SAL shipping! But it's all I could afford. :)

Why dose this guy reminds me of darth vader?

Because you're a Star Wars fanboy? :)

This guy's a definite must-have... the Protect Gear really lends itself to a dramatically sculpted and dynamic figure.

Why does he have a calculator on his chest? Gonna do some combat algebra?

Awesome toy and a great review

Thanks for the heads up on this amazing toy.
HobbyLink Japan is sold out, but I found
several places that have it for preorder
(some for under $20).

I'll make sure to be careful with the shields
when my two figures arrive in the mail.

The Jin-Roh version of the armor looks better, in my opinion. The chest plate on the "Red Spectacles" version looks a bit flimsy, somehow. There's those big gaps at the shoulders, and a giant seam right in the middle of the chest. Of course, this might be the "recon" version of the armor, whereas the Jin-Roh is the "gunline" main-combat version. This kind of fits, with the Jin-Roh guys using MG42 instead of MG34.

The "Jin-Roh" armor doesn't have a solar-powered pocket calculator glued to it, for example.

And I'd also like to see the "female" version of the armor, a la Dragon/DML's "cy-girl" line.

this thing looks awesome! if they produce the ones from stray dog and jin-roh as well I'll probably get all 3 of 'em

I finally got one of these (and so did Zuey) and it's pretty awesome. Heart. Some of the guns seem a little flimsy, but whatever. The little Mauser gun is my favorite anyway and is great.