This review sample provided by Aoshima. 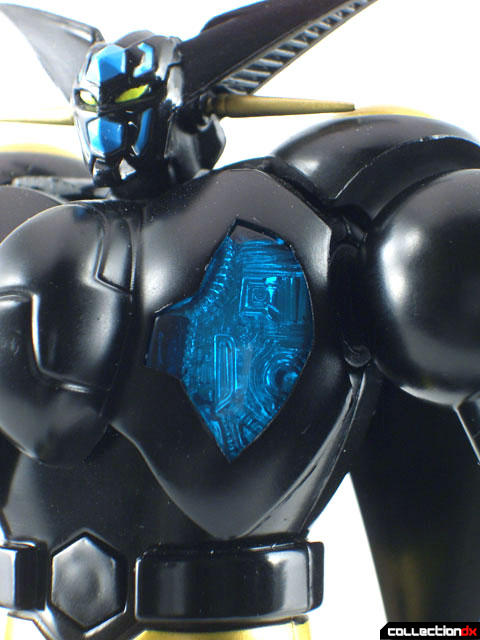 Yeah, you read that right. I don't know squat about Getter Robo. Anything I know I learned from the dozens of reviews of Getter variants over the years here at CDX. It's nothing personal against the Getter franchise, I just haven't gotten to it yet. So why am I reviewing this? Because Aoshima was nice enough to send a huge box of stuff over to CDX HQ and apparently all the resident Getter fans have filled their collecting quota and I do like a classic style gokin so I figured I'd give it a crack. 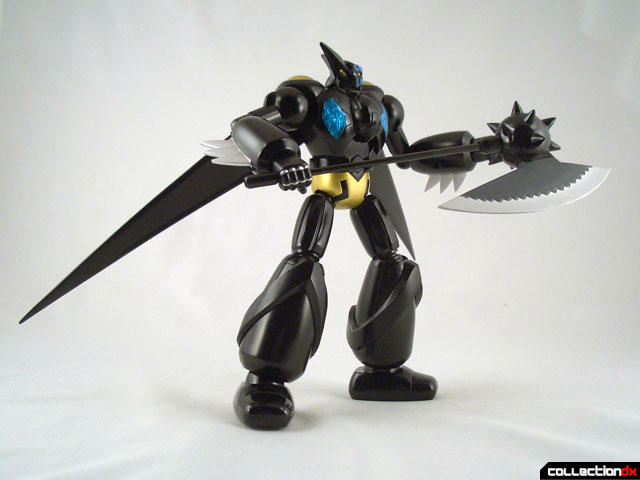 So here's what I do know – The box called this Shin Getter One. I shot the video review first and the Getter fans on YouTube where sure to let me know I got the style of Getter wrong. So I reached out to our fellow writers and fans and they say this is New Getter Robo (So if I still have the details royally screwed up please send the hate mail to Sanjeev. Thank You.) It's a black repaint of the renewal release by Aoshima. The renewal release features new elbow joints and the clear chest parts. Now, on to the toy... 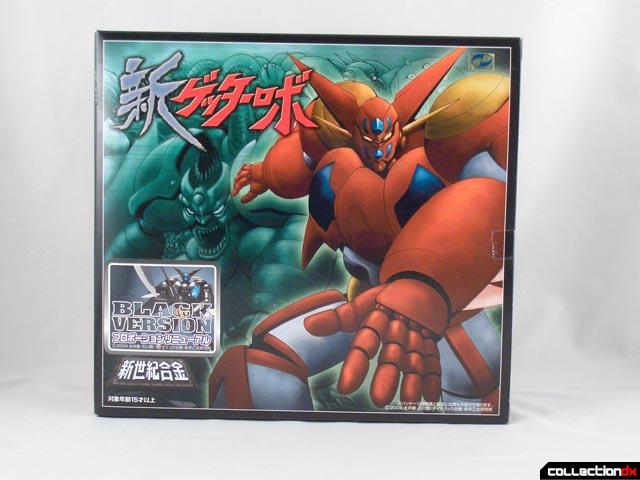 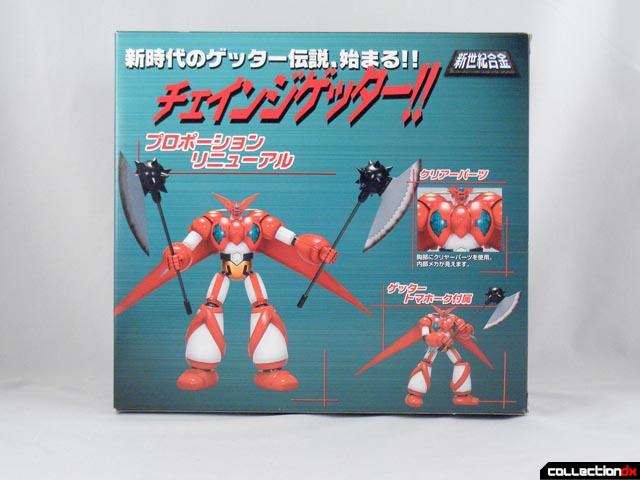 The package this dynamo comes in is as old-school as it's diecast content. 4 color artwork decorates the front and sides. Photos of the original color scheme are on the back with only a sticker on the front to indicate this is a black repaint. 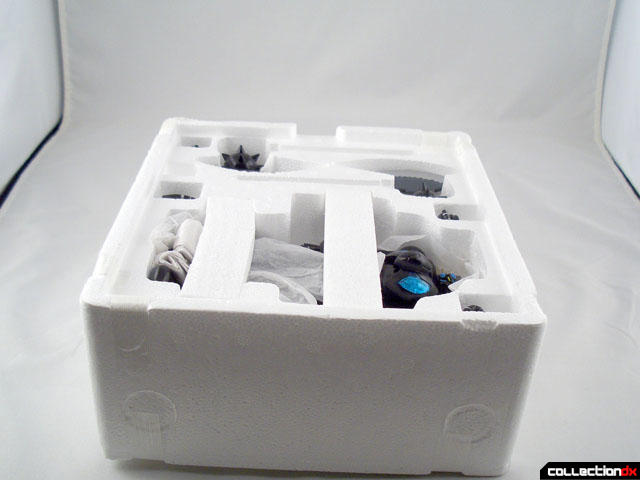 Inside the box is a Styrofoam tray with the parts and robot carefully wrapped in tissue paper. It's been a while since I've gotten a nice piece of diecast in Styrofoam and I forgot how nice an un-boxing experience that can be. 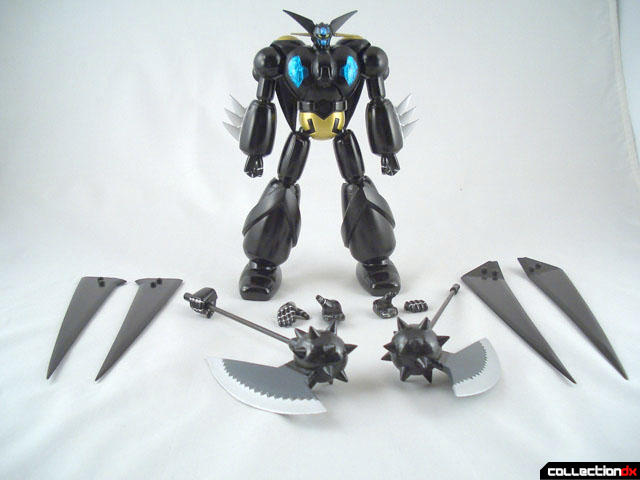 Assembly just requires you picking out a pair of wings you like and putting them on and adding the little “belt buckle beam thingy” cover to the robots waist. 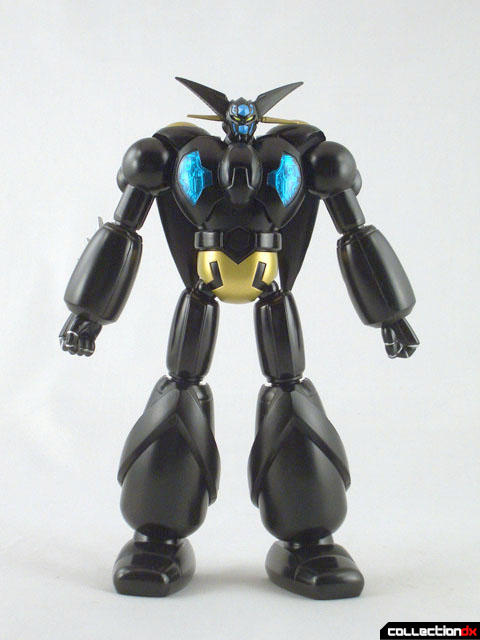 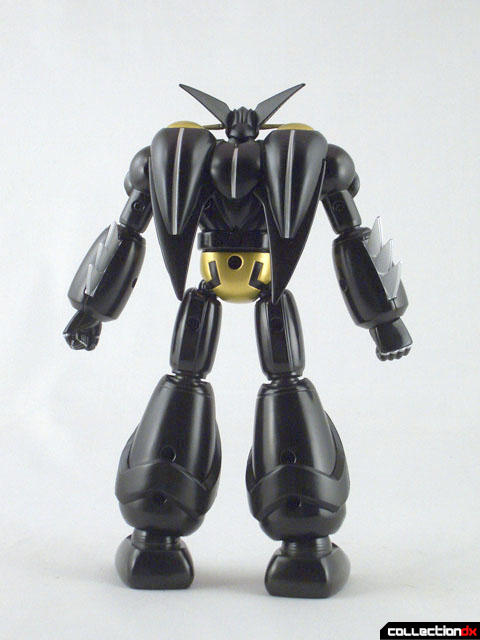 The figure itself is a beauty of cool metal weighing in at close to 2 pounds. Yep it's all quality metal with the exceptions being the head, the clear chest pieces, the axe's ball and blades, wings, back plate and hands. With most of that being ABS plastic and the hands and axe ends made of a softer PVC. 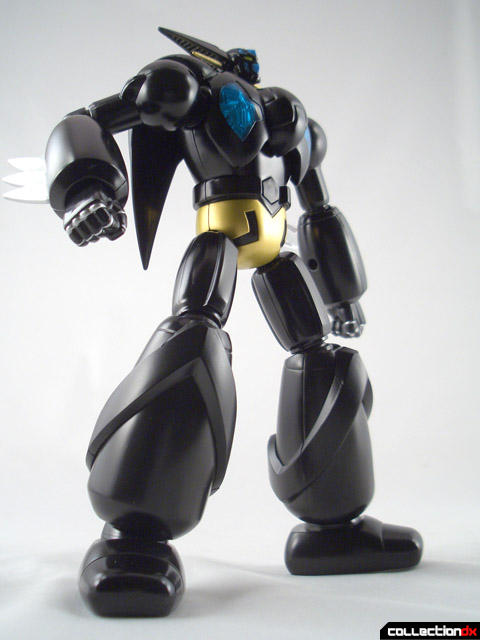 Articulation is good. The head turns, arms move at the shoulder and bend at the elbow with the hands (swappable) able to rotate. The knees have a limited range of motion but do click when moved. 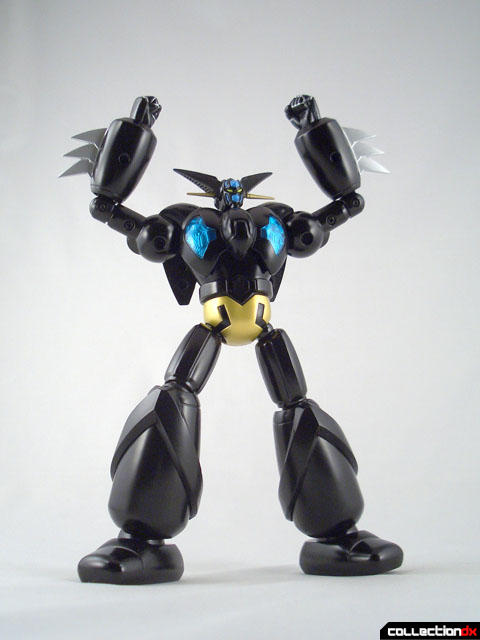 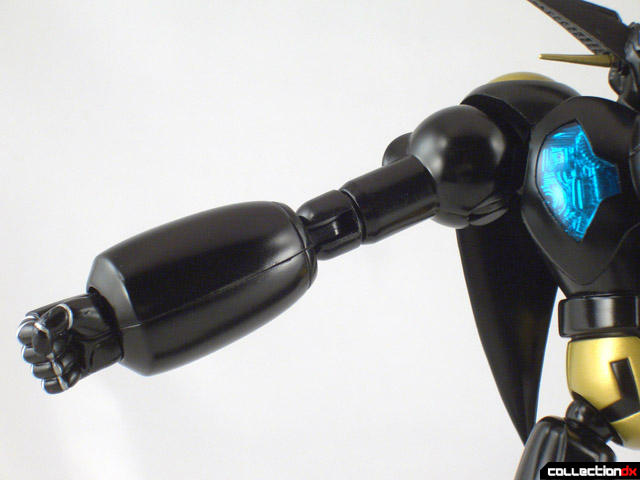 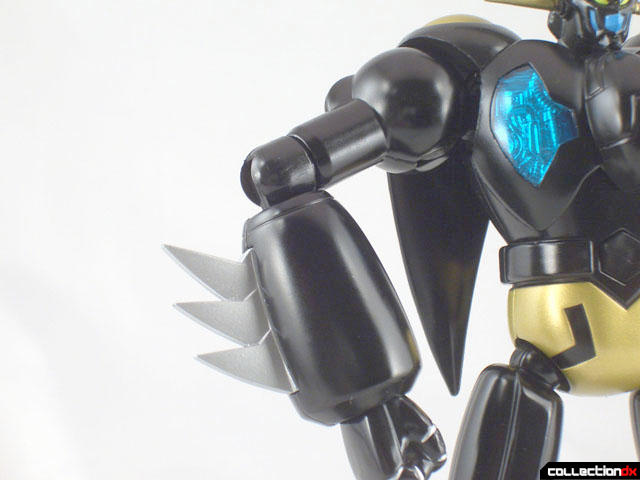 The arms feature the renewal style of engineering. Basically to keep the anime look they have hidden the joint for the elbow, you must extend the lower arm to reveal the joint. When bent you really can't tell the arm is extended. It's very well thought out actually. 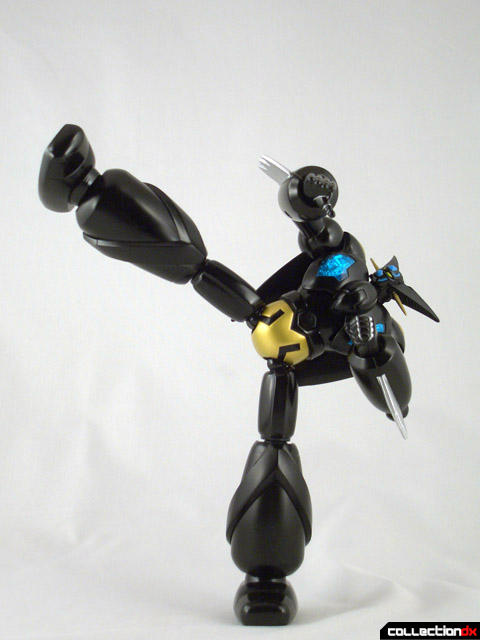 The paint application is flawlessly applied and done in a flat, matte finish. I think the repaint would have been a little sharper if they had extended the gold to trim the legs a bit. 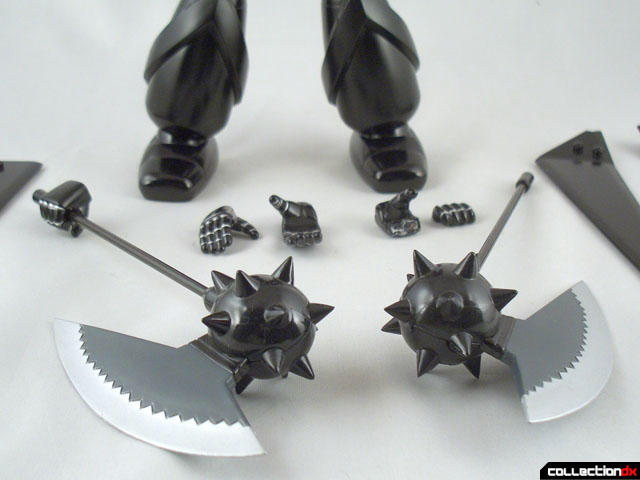 Precision crafted with excellent fit and finish. Honestly just a real nice, quality piece of gokin all around. My only complaint (and the reason I have no picture's of a duel axe-wielding Getter) is the left weapon holding hand pretty much separated the first time I put the weapon in his hand. Not a big deal, a little dab of super-glue should fix that. Sadly I had none on hand that wasn't dried out to a brick at the time of this review. 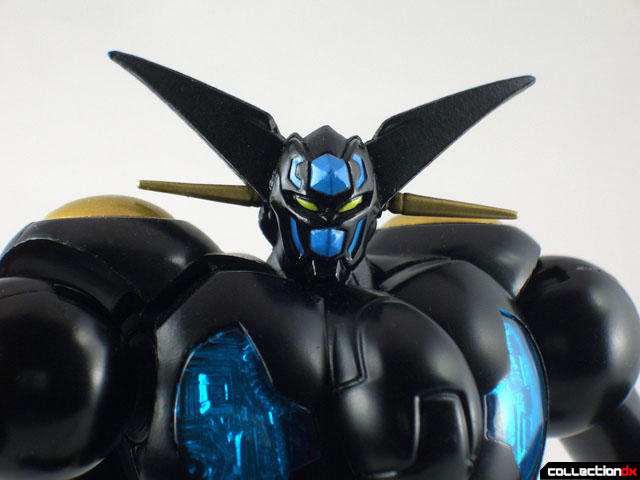 Well I must say this piece really makes me wish they had more franchise that I personally collect because this Getter here is everything a modern and dare-I-say vintage gokin collector looks for in a hunk of metal robot goodness. Now if only it had some firing fists or something...

You can get yourself this sexy piece of cool die cast directly from Aoshima. 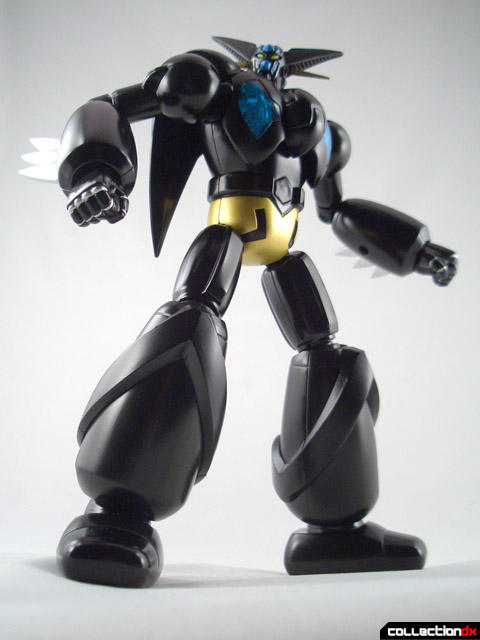 Super Sexy (Improperly titled 'cause I'm to lazy to reencode it...) HD Video Review for your entertainment embedded below.

Thanks for the review, let me see the difference between the shin getter black version and this shin getter renewal version (basically blue clear parts, no trim, and matte black paint job).

Atom,if you ever do check out some Getter Robo anime,I'd reccomend you stick to the old school.
I netflixed one of the OVAs,like Shin Getter or New Getter or Neo Getter or whatever and it was fairly stupid. I didn't even bother watching the next volume,I stopped after 1 disc. Whereas I watched 1 or 2 episodes of the original on Youtube or somesuch and it was awesome 70's mecha action like god intended.