The Motoslave is one of those mythical toys that makes you wonder why they never made one sooner. It comes from the classic anime Bubblegum Crisis, which originally was an 8-part OVA from 1987. 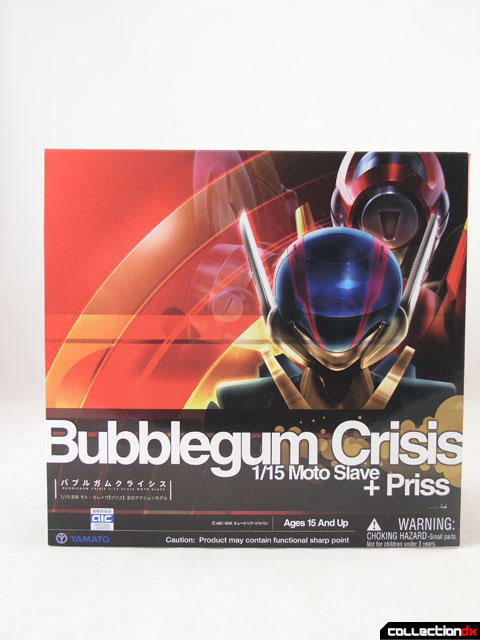 BGC had just come out when I had my "anime awakening" and although I was never a huge fan of the series, I have nostalgia for its place in my history. In fact, BGC was the feature story in American anime fanzine I got in the late 80s, and it was in this magazine that I got my first glimpse of the Motoslave. I haven’t seen the magazine in years, but I remember the black and white newsprint image like it was yesterday. 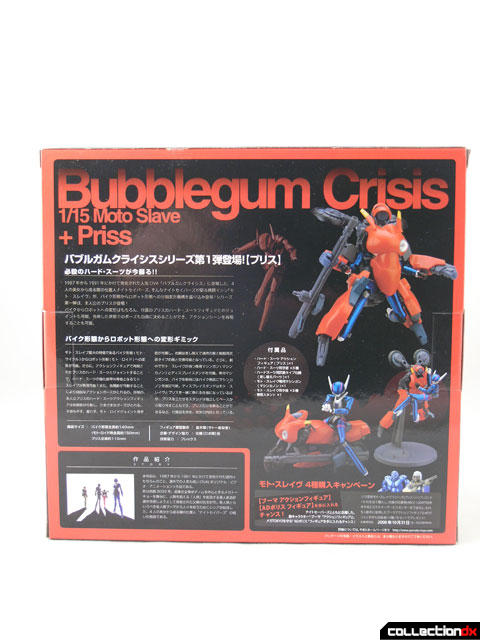 The most likely reason why we haven’t seen a Motoslave toy up until now is that the technology wasn’t up to par. Even now this version isn’t entirely accurate with the animation transformation, but it is close enough. I guess another reason we have seen this now is that there is resurgence in popularity for 80’s mechanical designs in toy form, as evidenced by the Megazone 23 Garland, and THREE different companies producing Mospeada Ride Armor toys.

For those of you not in the know, the Motoslave is a motorcycle that can transform into a robot, or be worn as a protective suit of armor. This particular Motoslave belongs to Priss, one of the Knight Sabers, a group of women who fight crime in a futuristic Tokyo.

With this toy I can safely say that Yamato has their act together. Gone are the fragile parts, the QC issues. This thing is great and ready to go right out of the box. 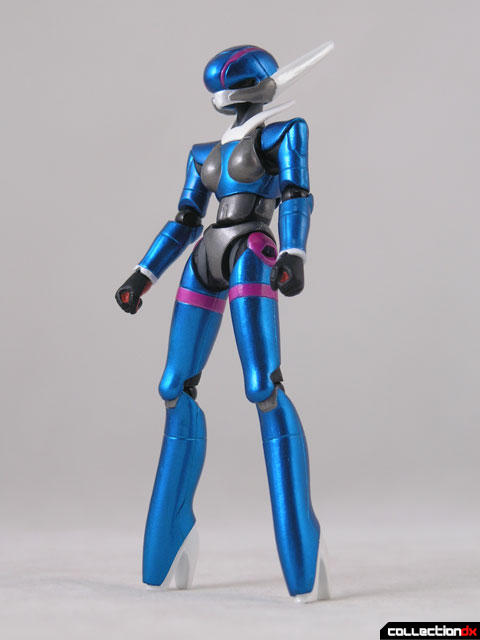 Priss is shown here in her Hardsuit – her protective armor used to fight crime. The figure is articulated with ball joints in the neck (2) torso (2), shoulders, elbows, hips and knees. 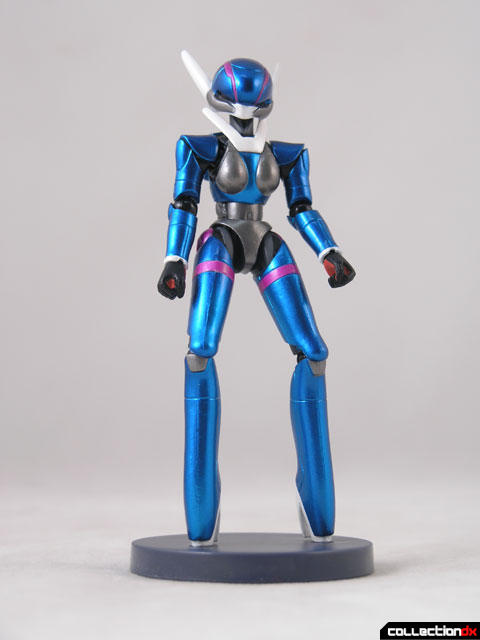 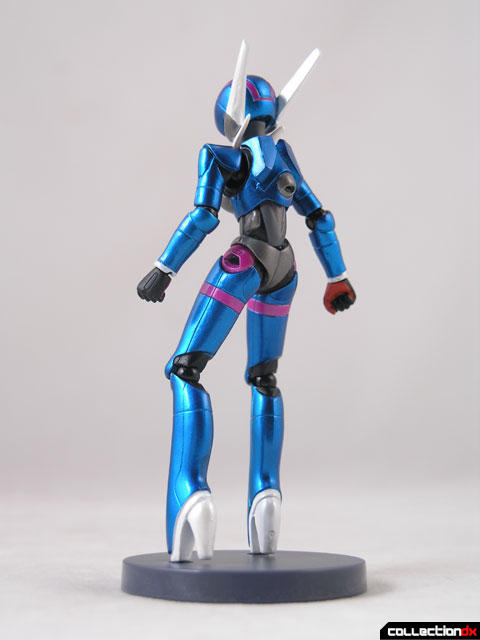 The head and torso articulation is great, but the shoulders could use some improvement. The nature of the design prohibits Priss from being able to swing her arms outward any significant distance. The elbows have mini-joints that resemble Revoltech joints that do not click. Priss comes with five variant hands, as well as a replaceable right arm. 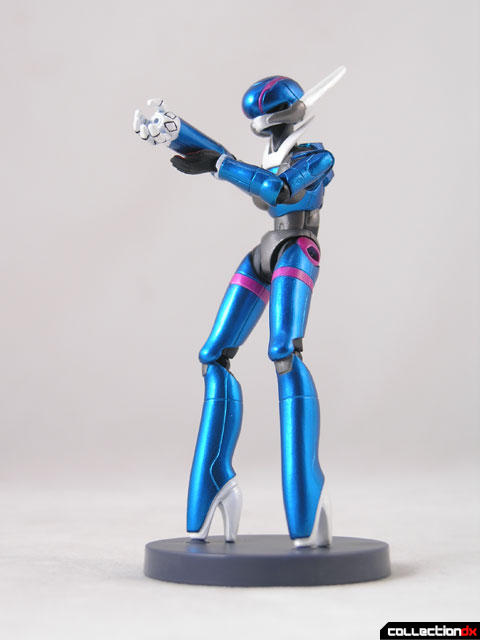 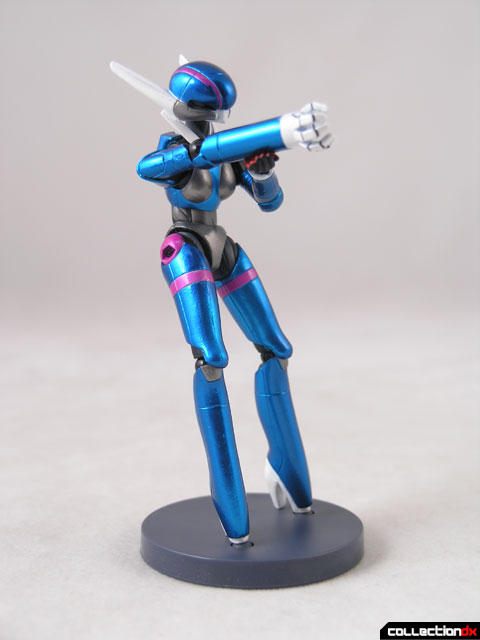 The hips are another weak spot, as they will pop out of their ball joints if you try to move them too far. 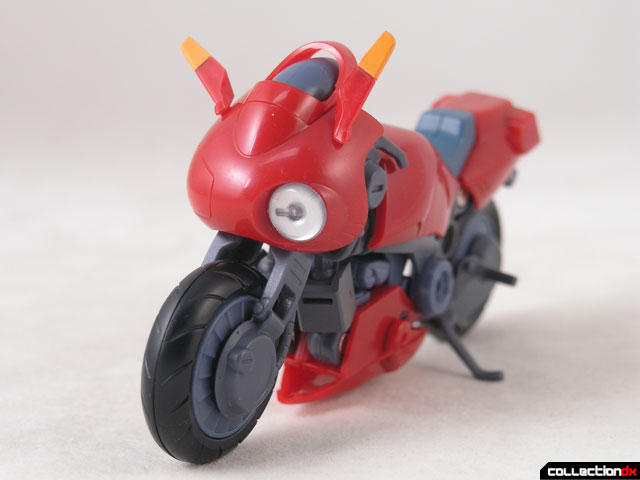 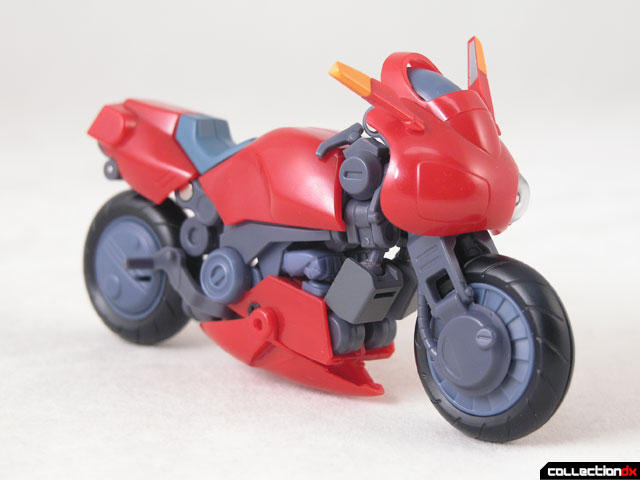 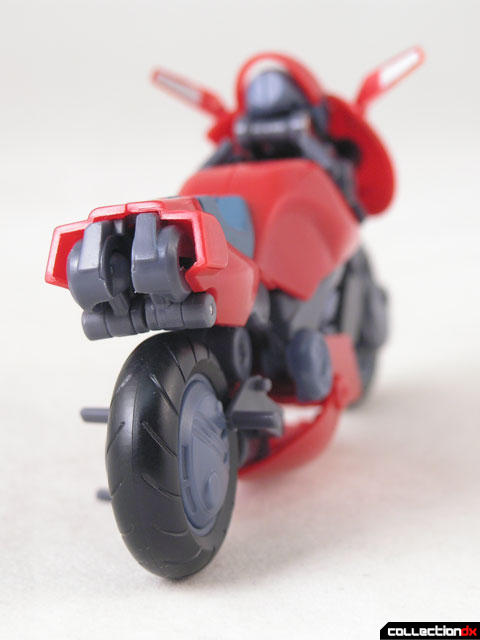 The Motoslave is really the main draw here. In bike mode it is 14cm long and features rolling tires and a working kickstand. It is molded entirely in color, with no paint or decals. It makes it very toy-like, but a little detail would have been nice, such as color detail on the handlebars or instrument panel. A large cannon with a folding handle can be attached to the side of the vehicle. 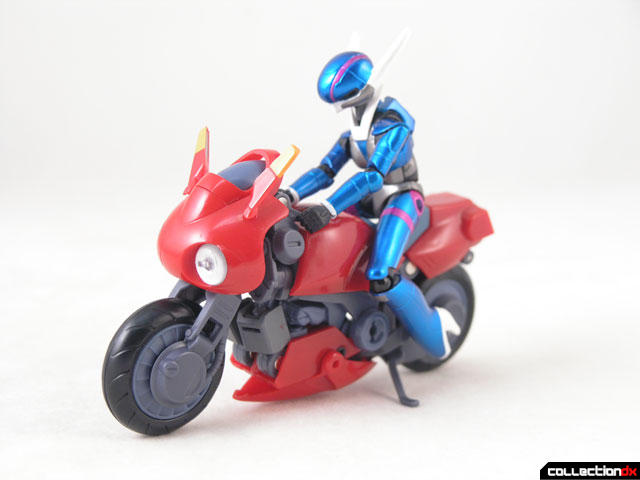 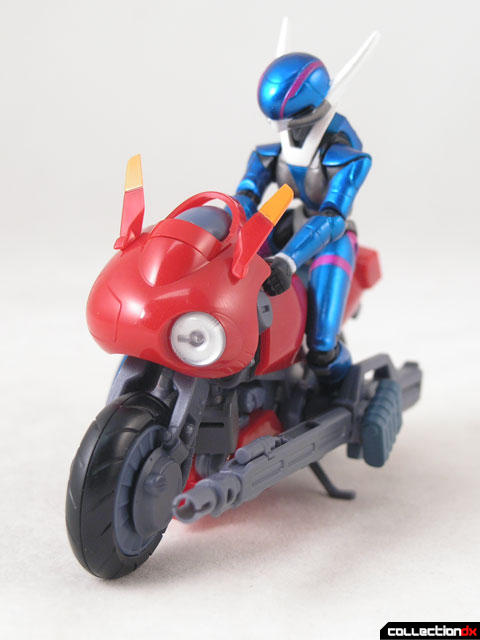 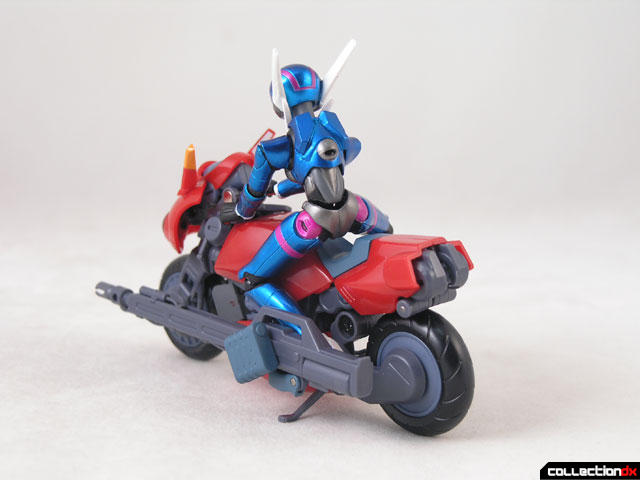 Transforming the Motoslave is…. Involved. It’s kind of like toy origami. I won’t go through all the steps here, you can watch the video for that. One thing I want to stress to you though is that despite its fragile looks, the Motoslave is sturdy as hell. Each part is super strong, and the joints are connected by metal screws and rivets. You would really have to screw something up to break this. Kudos to Yamato for finally getting it.

Once the transformation is done, you are left with a robot with spindly arms and legs, and a big hollow inside. The figure has articulation at the head, neck, shoulders, elbows, wrists, hips, knees and feet. Not too shabby for something that used to be a motorcycle. 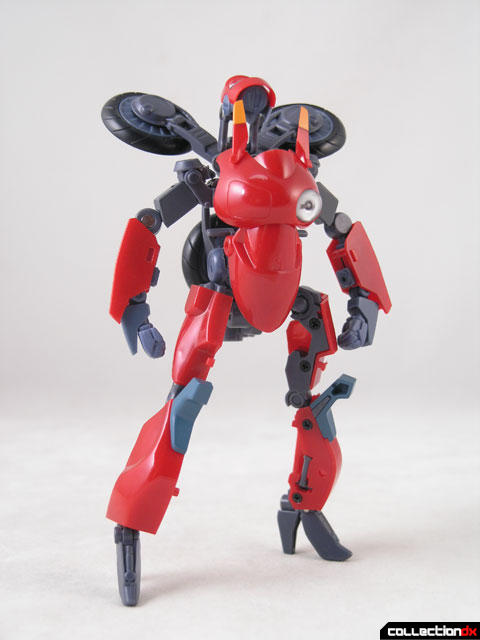 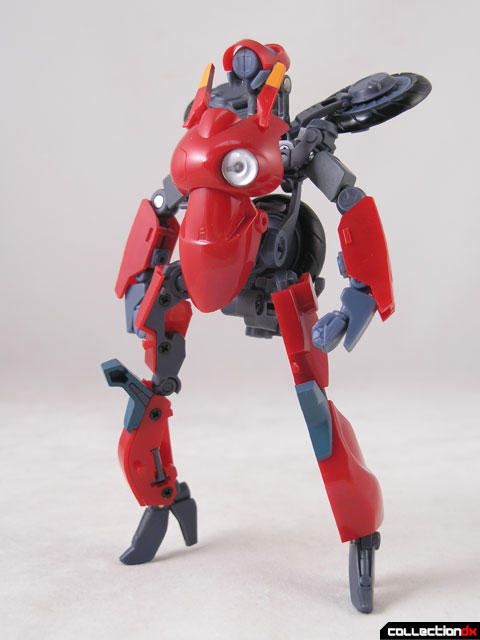 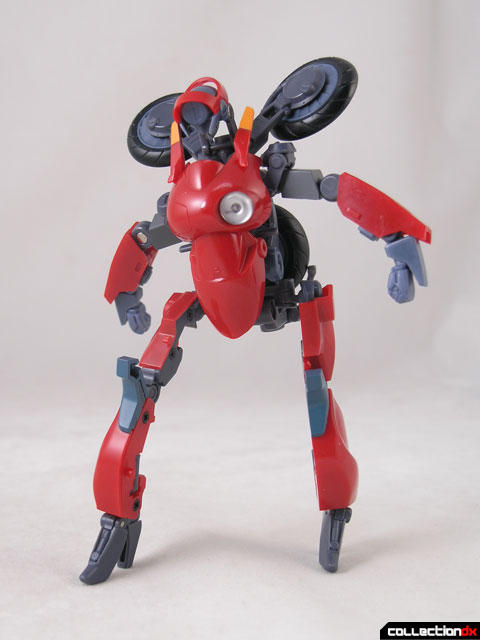 But here is where the fun begins. Priss can actually fit inside of the Motoslave. 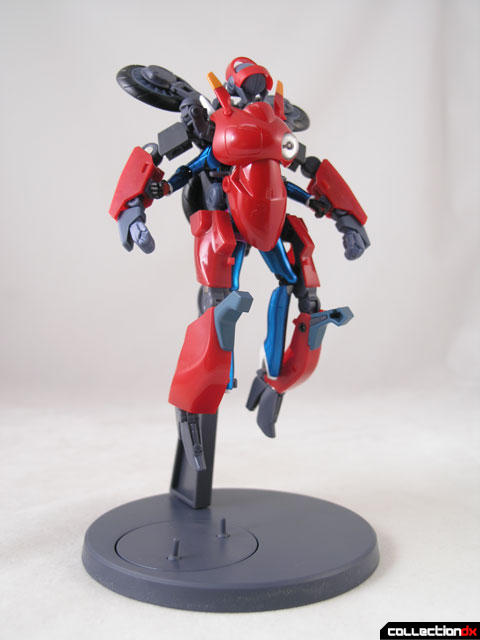 To do this, you need to remove the front cover from the Motoslave, and you need to make some modifications to Priss.

First, you must remove the shoulder connectors on Priss and replace with the supplied larger ones. Why Yamato could not have engineered something that did this, I have no idea. It’s a pain, plain and simple. You also have to replace the hands with fists with small pegs on them. 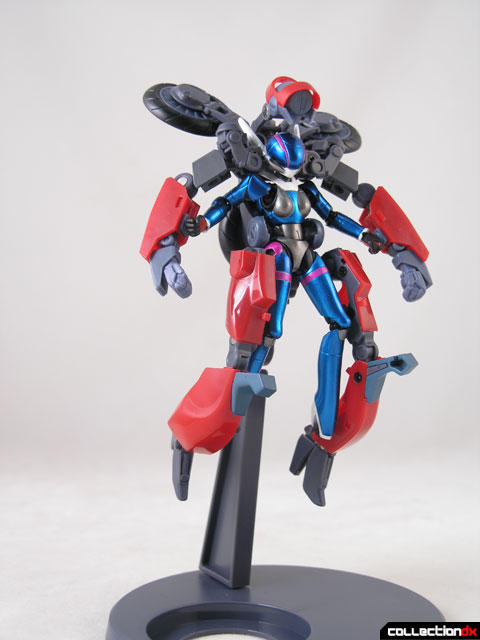 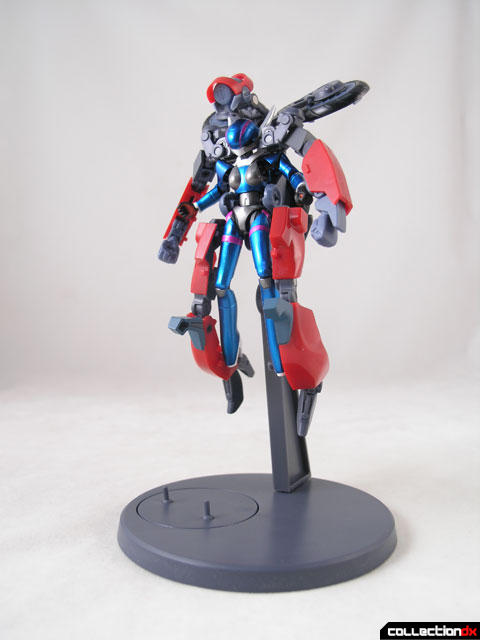 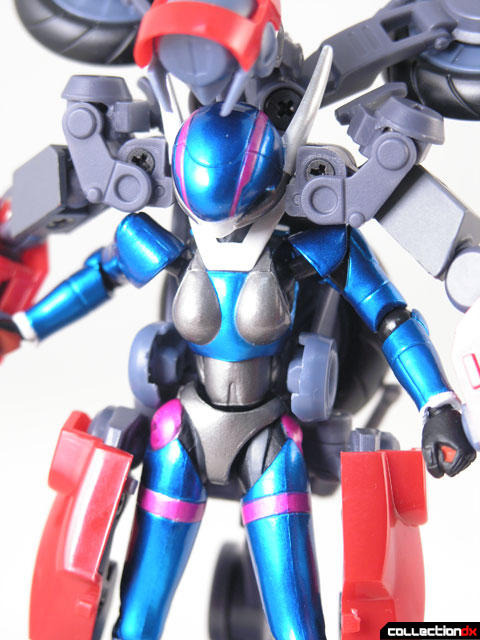 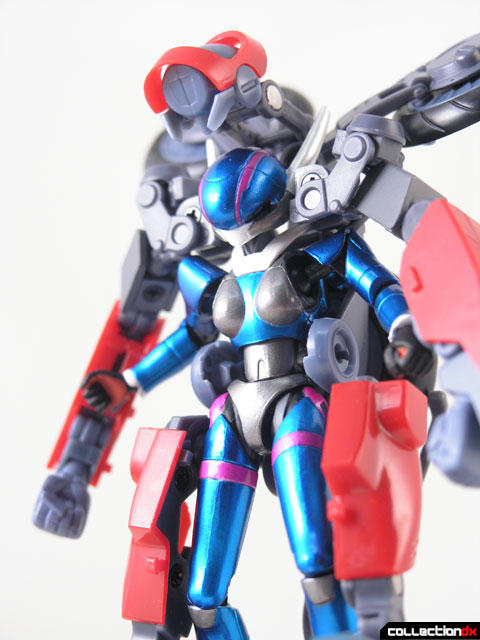 Priss then rests in the cavity on the Motoslave, and her hands plug into small tabs on the arms. On the legs of the robot, small hooks fold out for Priss to rest her feet on. Unfortunately, her legs are not long enough to reach the pegs, and you actually have to extend the legs at the knee to get them to reach. 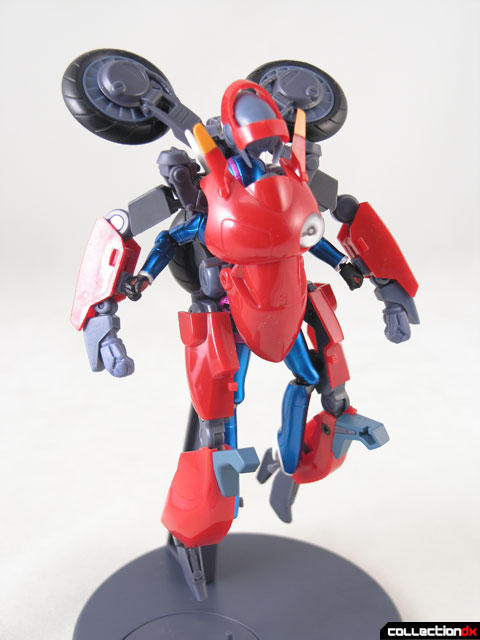 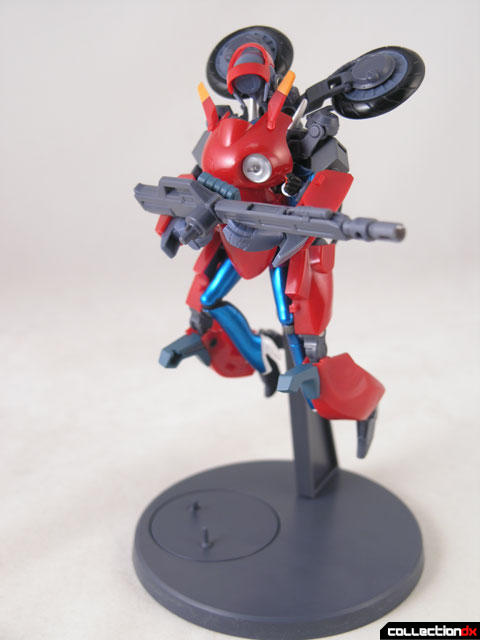 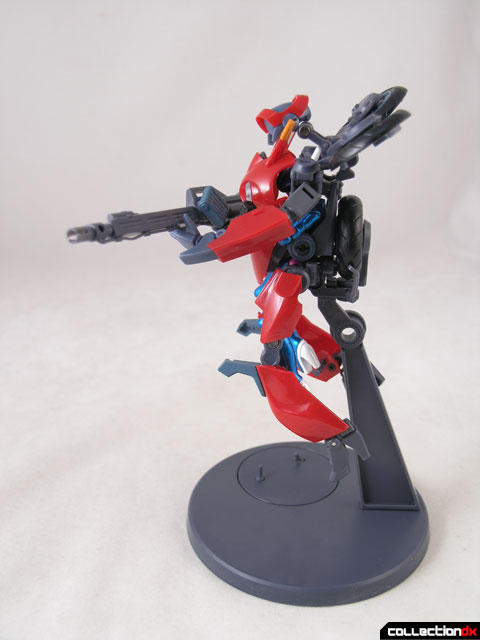 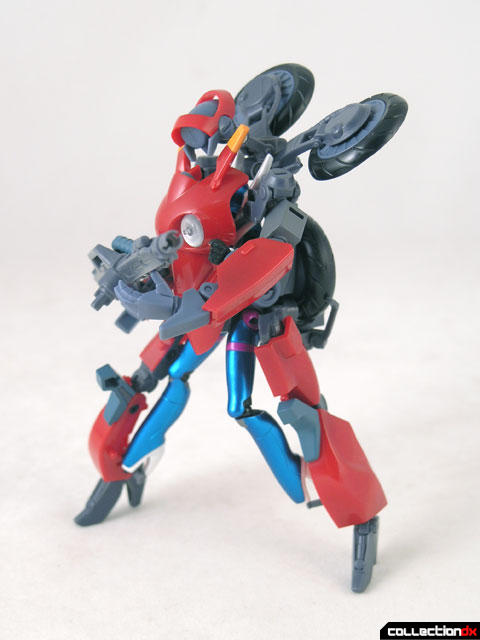 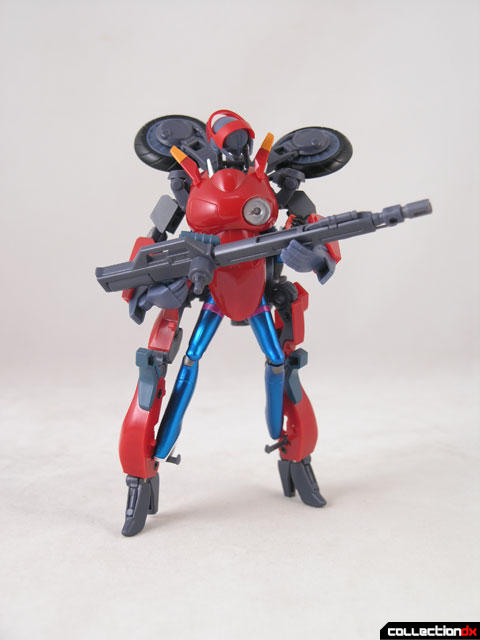 The Motoslave includes variant hands that enable it to hold the cannon. The hands just fit in with friction

In either mode, the Motoslave and Priss can be attached to a display stand. There is a small circular section with pegs in it for Priss to stand on, and this section can be removed for independent display. The large arm holds the Motoslave up high for dynamic poses. 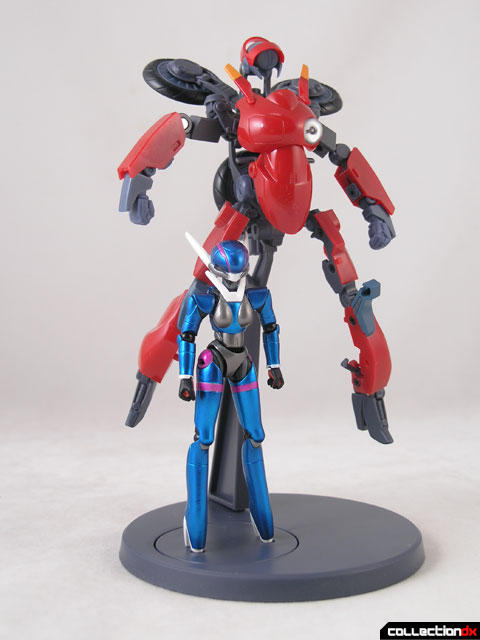 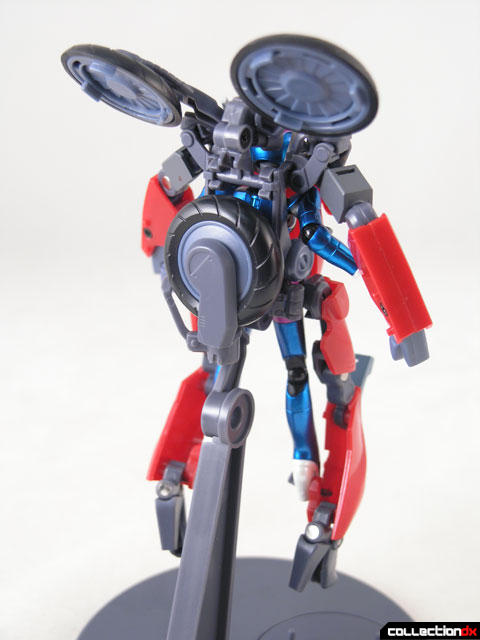 I like the look of this thing, and to me, the best part is in mid-transformation when you get Priss situated inside of the Motoslave. It just looks so great and detailed. I love the quality of materials, and the intricate transformation.

The Priss figure could have been done so much better. With the shoulder joint swapping and the leg extending needed you just cant help feel that this part of the toy wasn’t thought out well enough.

For me, the Priss figure does not ruin the toy, but the price tag is a bit high. If you love the design, I think you will overlook the flaws and agree that this is a fun toy.

A quick note, Yamato is making a run of "DX" Motoslaves with metallic paint and more paint in the detail areas. If it's the paint (or lack thereof actually) that bothers you, you may want to wait for that release.

As for this one, I've been waiting for this since 1989 when I first saw a crummy bootleg tape of raw BGC episodes. Having one now I can say it's about as good as you can expect it to be without being a delicate model kit. It reminds me of the CM's Mospeada toys, intricate, yet still very much a toy.

I can't believe they were actually able to make this into a transformable toy that looks good in both modes! Some of the stuff they're coming out with now is amazingly engineered compared to what passed for show accuracy even a couple of years ago.

It's hard to believe that anyone would make a fully transformable motoslave and have it be sturdy.

I only hope Yamato manages to keep up this level of quality.

Wow! It's must be great! Maybe Yamato could make a better Mospeada bikes???

Save for the bubblegum dispenser toy-feel of the material, the Motoslave toy looks good. I just can't imagine how one can fight in those damned stiletto-type heels...

If I were going to pick this up, I'd just go for whichever version is cheaper and just buy some red gloss enamel paint and give the red bits a once-over. That'd do wonders for the looks of this toy.

Many years ago, a friend of my older brother brought Bubblegum Crisis over to our house on VHS. We thought it was pretty neat, but I remember very little about it.

Excellent review Josh, the figure looks pretty cool but a bit pricey for my tastes. Who knows, maybe someday I will give in to the opportunity for nostalgia :)

Used to watch CDX reviews, I'm a bit disapointed by this model. When I first saw it, I was a bit mhhh... you know... like just watching approximative plastic molded models from a "we like money" company made for happy enthousiasts. So, I waited and this was wise to end on CDX review : pictures are still plastic pieces assembled with no heart nor soul at the end.
I remember of a Priss model made in the early '90s (maybe more 'round '88) which was gorgeous, robotic and posing in a marvelous way (no idea of the manufacturer) for an unreasonable price, but cute anyway. These actual pieces of plastic are making me cold compared to them. The idea of crossing the bike with the character is good ; the final product... not of my guests.

How about putting an interchangeable head with that "metallic" version?
That will totally push me into buying all four Knight Sabers. I wonder why YAMATO thought that it was not a big deal to include the "anime" heads. Maybe they're planning to do that in the future just to milk the line- just like what they are doing now with the Macross figures...hmmmm....