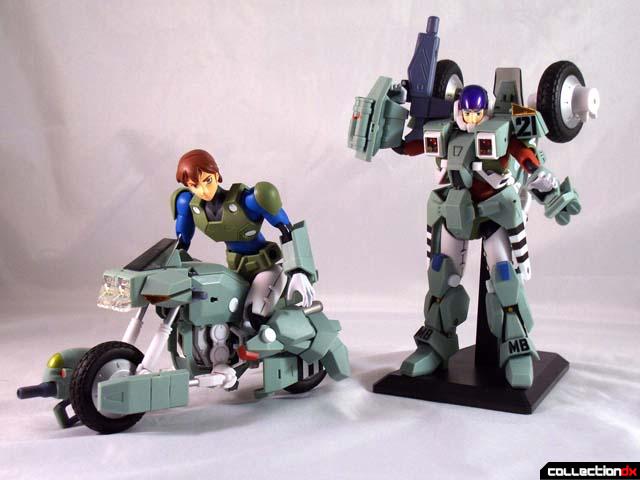 MOSPEADA - Military Operation Soldier Protect Emergency Aviation Dive Auto, is the actual name of the transformable motorcycle-armors the series features and Mega House has released the first of what is soon to be a full series of all the main characters from Genesis Climber Mospeada this particular one is the VR-052F (Stick Type) AKA “Scott Bernard's Cyclone.” 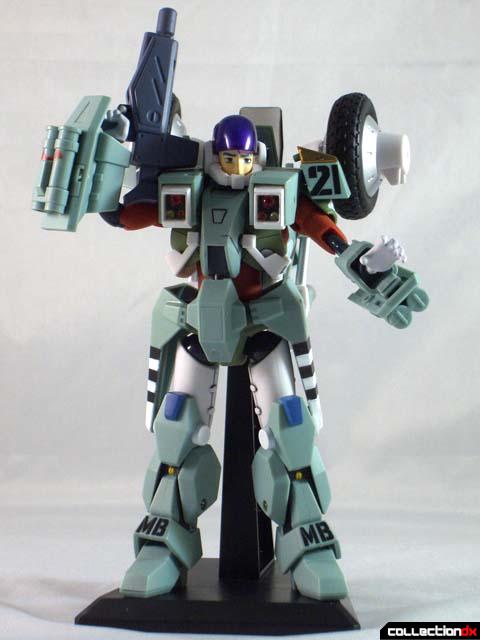 It all comes in a cardboard box decorated with 4 color art and windows on the front so the bike and the figure are both visible. While I really like the general design of the package, they should have used some classic (or at least classic style) line art instead of using an enhanced image of the toy on the front. It would have been a nice nod to the original Gakken release especially with it being the 25th anniversary of Genesis Climber Mospeada. 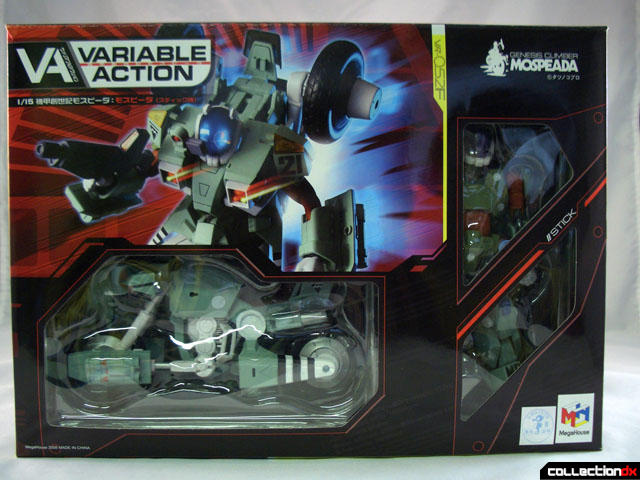 Included inside the box: 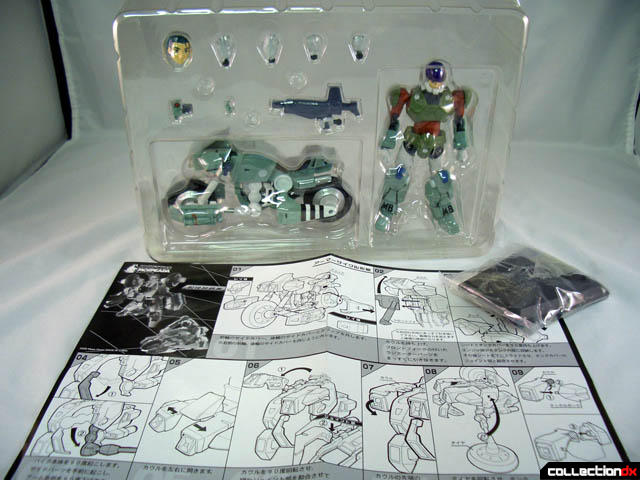 A sticker sheet was not included. Apparently, there is a sheet of stickers that were given away when you purchased these in-stores in Japan but those of us importing them appear to be out of luck. Not a huge deal as the Stick figure comes with all the appropriate markings you expect but I would have liked to have gotten it anyway. 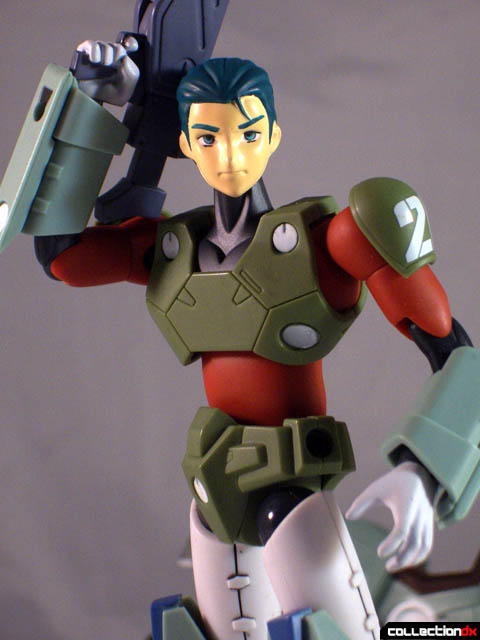 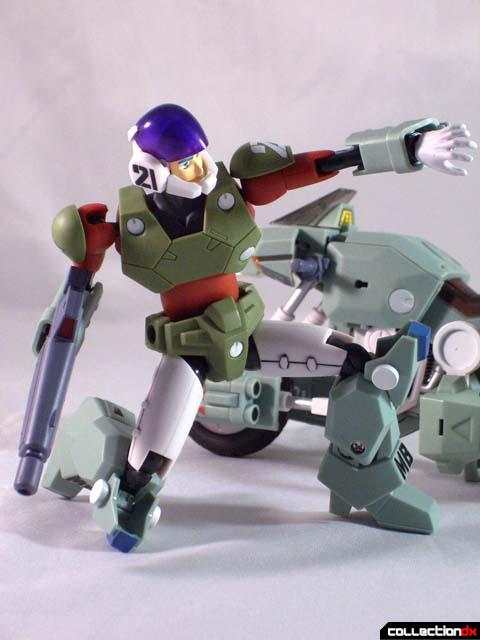 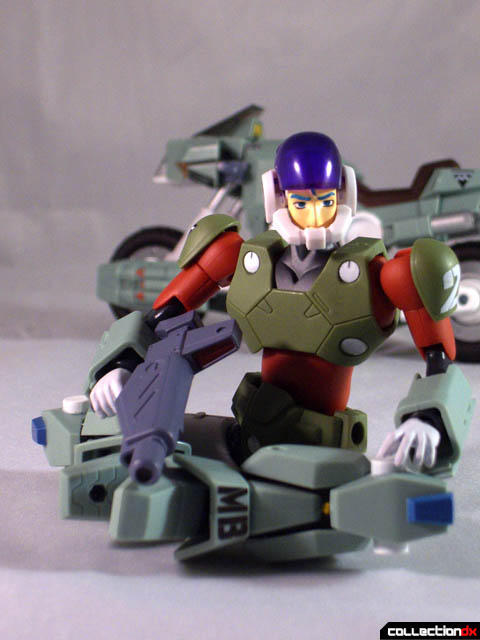 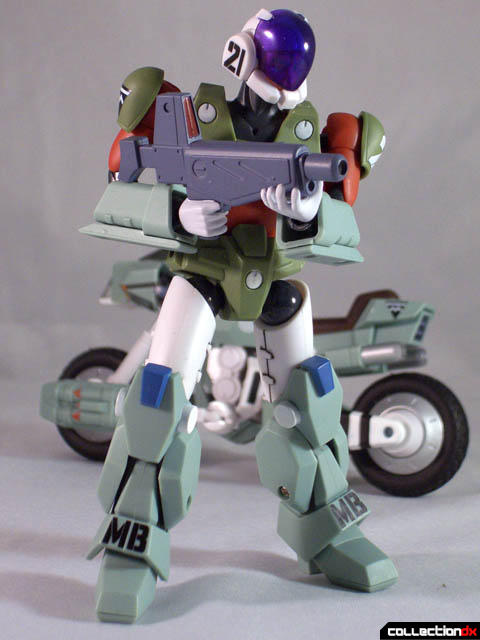 The Stick figure features over 30 points of articulation, nice range of motion, excellent poseability and the joints feel nice and tight without being too stiff. There is a big gripe here though; while most of the figure is excellent Mega House decided to not add the ability to swivel below the elbows/above the gauntlets, thus you can not rotate the gauntlets to where they're supposed to be. It’s not a deal breaker for me but it definitely goes into the “what were they thinking?” category. The toy features no diecast content whatsoever and is all plastic. 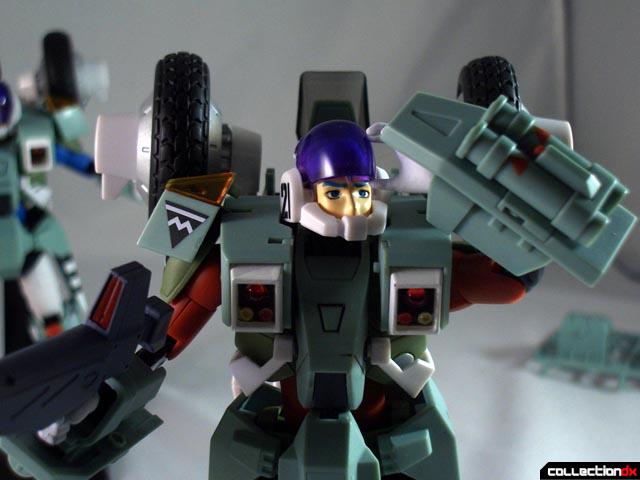 Paint detail is very good and I really like the overall “anime” look of the character. Some folks seem to be disappointed that the “toy” doesn’t have more of a real military paint application which is just fine by me as I really dig an animated cartoon and not a real military vehicle. With that said my Scott has what appears to be a worn panel line across the front of the chest, it's as if the bikes were put into the package before the paint was dry. 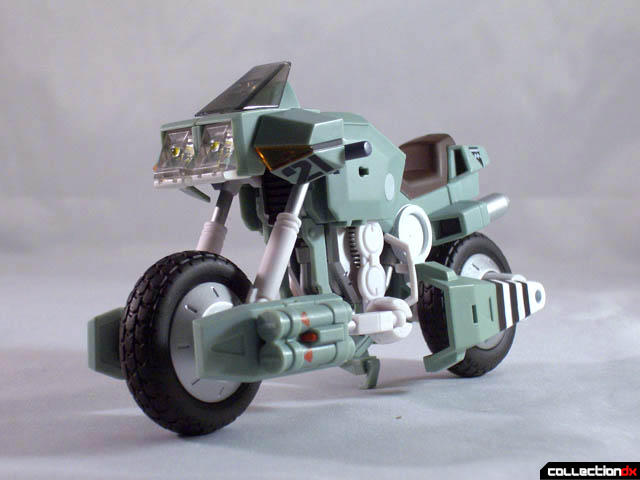 The piece is nice and solid in bike mode but the wheels are very tight and do not “roll” very easily. Included in the package is also a very subtle kickstand to help hold the bike up in an upright mode and the figure itself does sit on the bike well, its just not in the same way it is in the cartoon. No foot pegs are built in, so you can not put the feet out to the side but you can get the rider to “hug” the bike nicely. 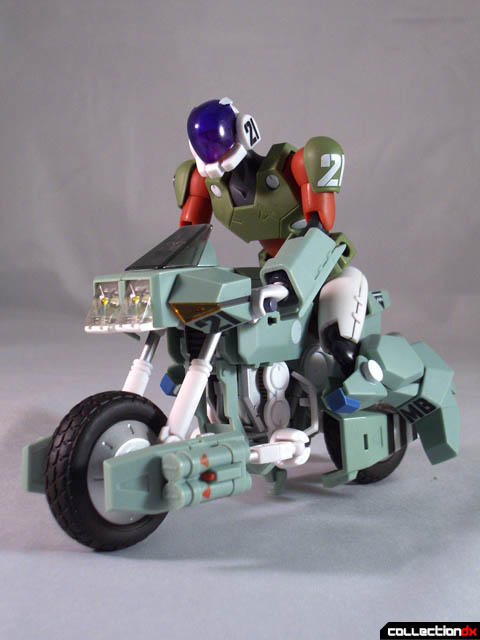 Transformation is finicky; mainly because some of the plastic pieces stick instead of sliding smoothly and pop off when forced. To Mega Houses credit nothing breaks and can easily be popped back on. I should be able to transform my toy without having to chase parts and pieces across the carpet. As a transforming display piece, it’s not bad but it’s not going to fulfill any toy craving for playability. 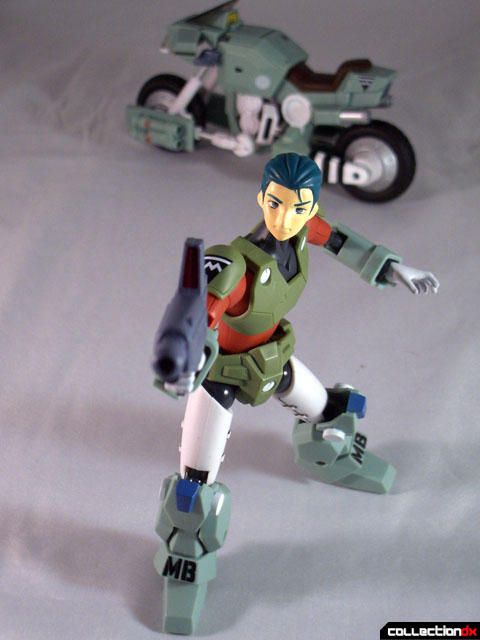 The video below is long so it’s only for the most die-hard of the curious about the ins and outs of the items. Both Stick and Ley are included.

For all my criticisms of the actual transformation, again in its final ride armor mode it looks good and feels solid. However any real, dynamic poses with this guy are impossible without the included stand mainly because he’s a bit loose in the waist with all the gear on. 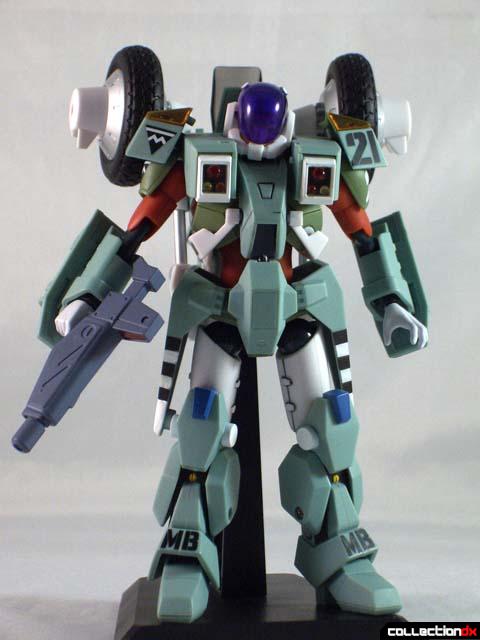 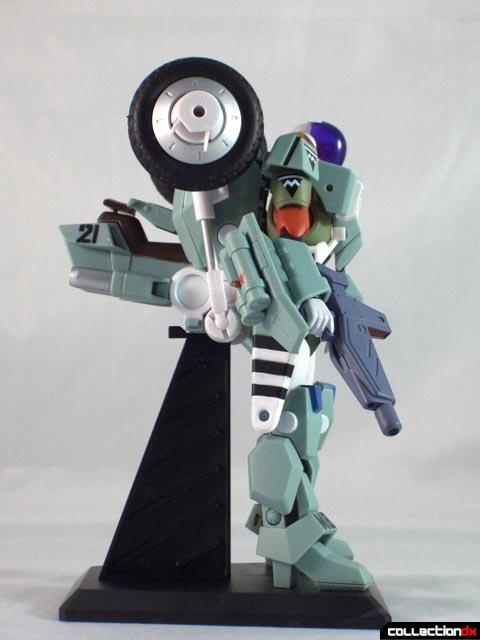 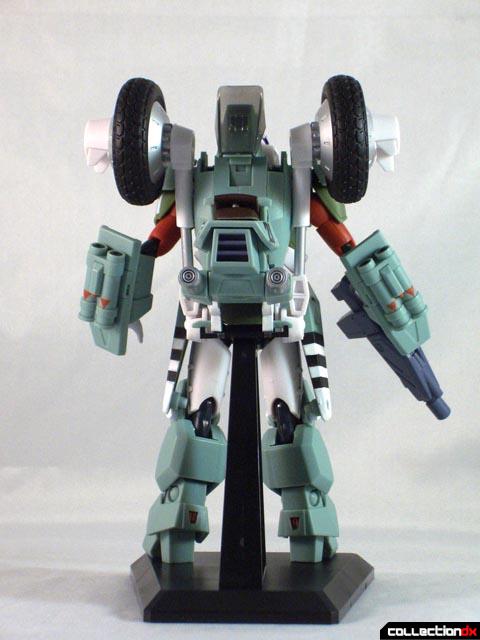 The stand is very nice and holds the ride armor up very well, however the included flying stand attachment is kind of a joke; it has no tension whatsoever in the joint that swivels so holding any sort of flying pose is impossible. 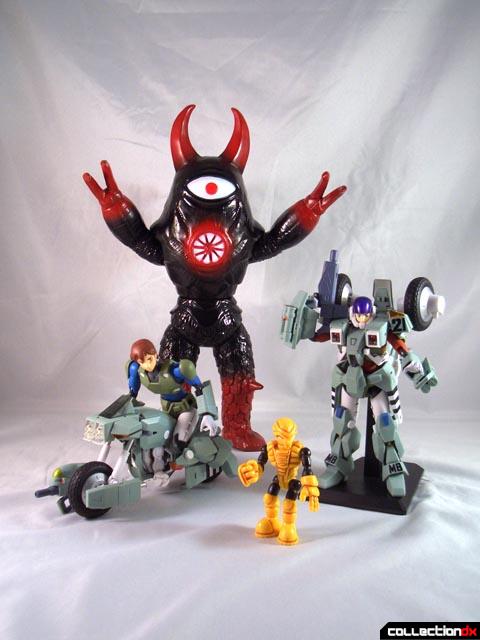 As you can see from the review it’s a real mixed bag. The fit, finish and overall look of this Mega House release is excellent in both modes but getting it there and back is a bit of a pain. However if you want a more palpable toy experience I would wait and see what Beagle or Toynami bring us later this year in a larger 1/10 scale vs this 1/15th scale release. All others that like a display piece, I say go for it - just know what you're getting before you buy.

Hi Atom,
That was a great review. However, I have a question? Forgive me if I missed it when reading but, does it have any diecast content? Have you seen the CM version? If so, how does it compare?

I got a decent pose out of mine in flight. Rand (sorry grew up with Robotech so its always gonna be Rand. ALWAYS.) is flying backwards which is a little hard to see in the picture. I just put the stand on BACKWARDS so it won't fall over.

Sure its no Revoltech, but it can do a little bit of niceness.

I love the toy overall too. I'd preorder a Lancer or Rook version this instant if HLJ had the option up. Last I looked both of these were already sold out! Glad I preordered, something I utterly despise doing.

I thought Toynami said their version of this was "weeks away". What did they mean, 52 weeks? I'm glad I didn't wait for them, I'd still be waiting.

I'd like the mail-in guns that MH is offering, but I doubt Toynami will be able to secure them. Maybe MH will be generous and include them in the other two later on. (laughs) The Inbit sofubi and Mint figure remain a mystery too, probably more mail-ins for importers to get pissed about never getting.

These look great on the shelf and are worth the money over the CM's. Neither is perfect (Beagle looks like it just may be) but both have strengths aimed at different types of collectors.

Although I like the CM's in a weird 90's microman sort of way. They remind me of the old Zillion toys that nobody bought or remembers; really cool yet too complex for their own good, and just as overpriced.

Is it just me or do the proportions of the bike compared to the rider look wrong. The bike just looks too small to me. I think it is mainly due to the wheels being too small, especially in that first picture. It looks like he is riding a kids bike.

I have to agree with the above comment. The motorcycle with rider reminds of one of those 50cc pocket motorcycles. Megahouse really should have made the motorcycle a little larger.

So it's official: Both the Aoshima *and* the CMs Ride Armors are major disapointments.

I'm going to skip both and go for a vintage Gakken set.

Toynami's will be bad too, as its exactly the same as the Aoshima sets.

There's no reason to buy this piece with all the problems.

"I'm going to skip both and go for a vintage Gakken set."

Wait, so I'm a little confused: Toynami's going to be producing their own Cyclone...and they're marketing the Mega House and Beagle in the US??? Isn't that a little crazy? 3-way competition...with yourself?

Or am I misunderstanding the Beagle thing? Word on TBDX is that Toynami is, in fact, marketing the Beagle Ride Armor domestically in the US. Again, if that's true, that's a little crazy!

Anyway, we'll see how the whole thing plays out. Despite being rumored to be US$600, just like with the new Iron Man movie, I remain cautiously hopeful about the Beagle toy. ;)

Toynami is marketing the megahouse first, and then EITHER going to sell their version OR the Beagle version in the us as a masterpiece.

After seeing the beagle version in physical form it makes theirs pale in comparison. The rumor is Yamato is sniffing around Beagle since Yamato wants to have the Aramaki trinity in it's lineup.

I wouldn't call the current toys major disappointments. Both have their strengths and weaknesses, yet neither is perfect, that's for sure.

It falls mainly on the collector's ideals of what they want out of it. Some had no idea they were that small until they got it, so naturally the disillusionment started there. Others want perfect transformation, while some just want it to look like it did in the show.

It just illustrates the varied tastes in the hobby, and the difficulty the companies have trying to please everybody, while still trying to be profitable.

One thing can be said for sure. It's stuff like this that makes this site so great. Not many places offer current reviews of a toy and compare it to a vast knowledge of gokin and henkei to see if it lives up to standards set years ago. These things ain't cheap and if it saves you from buying something you would end up regretting, we've done a service for each other.

Thought I would say something on the matter as well.
Because today I bought both the megahouse and the CM version, and I am pretty dissapointed in both of them...
They both look great on the shelf, but the transformation(s) are really annoying, especially with the megahouse version. At least the CM's parts aren't flying everywhere because they're mostly all secured with metal endings...
But I will still get those other ( bigger=better=more stable ) versions later !

Got my Yellow and Dark 1/15 variants a few days ago, and started working on them yesterday. I totally agree with the tendency to come apart without the slightest provocation. Honestly, if this was representative of the *actual* durability used by the REF to take on the Invid, all the Invid would ever have to do would to point a strong desk fan at them to declare victory.

Agreed on the flying mode as well - no amount of fiddling kept them from flopping and falling off like they were the village drunks - Kids! Remember NOT to drink and transform your ride armor at the same time!

But man - they really do look good - I'm especially pleased with the coloring job they did on the Yellow/Lancer version. Save for a weathering effect, it's fairly realistic... for a thing that never actually existed, that is. :)

Getting mine tommorrow. It is the aoshima mospeada model kit. http://www.1999.co.jp/eng/10020265
My concern is that the model kit booklet will be in japanase. any fan sites that does translations for these booklets?

btw... i am new to model kits. let's hope i can piece this together without snapping anything off...