The Japanese have always been obsessed with fighting beetles, and it comes as no surprise that this obsession spills over into the realm of toys. Fighting beetles are popular toys on the shelf, and catching the live ones seems like a right of passage for Japanese youth. The beetle motif is all over Japanese robot toys as well, from Diaclone and Machinerobo toys to modern toys like Beetleborgs. 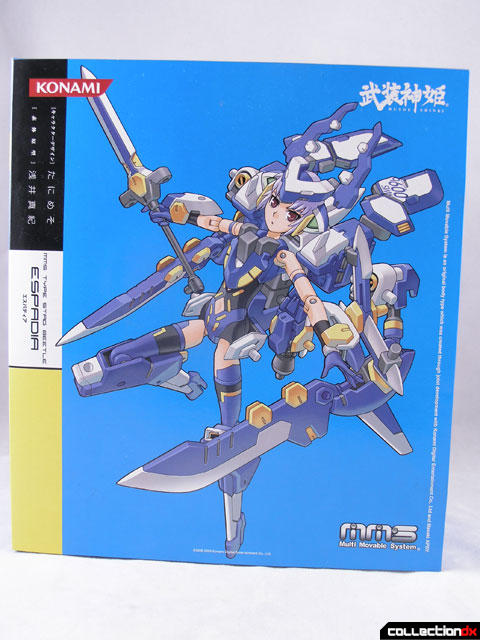 The box is the typically nice Busou Shinki box, with a velcro-sealed window flap that opens to reveal the figure and its parts. 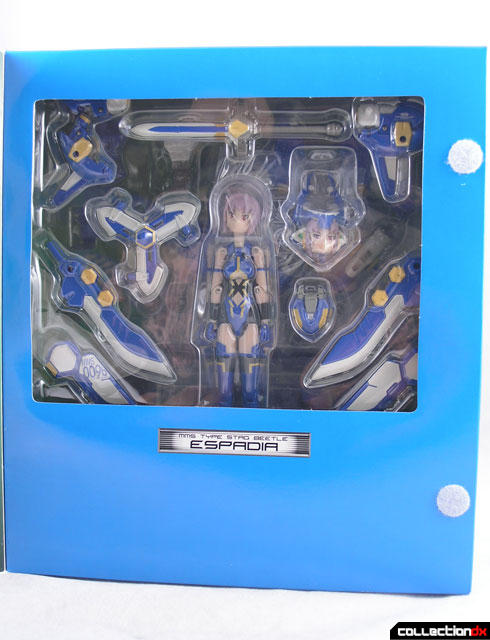 Inside the figure is packed in two translucent trays. 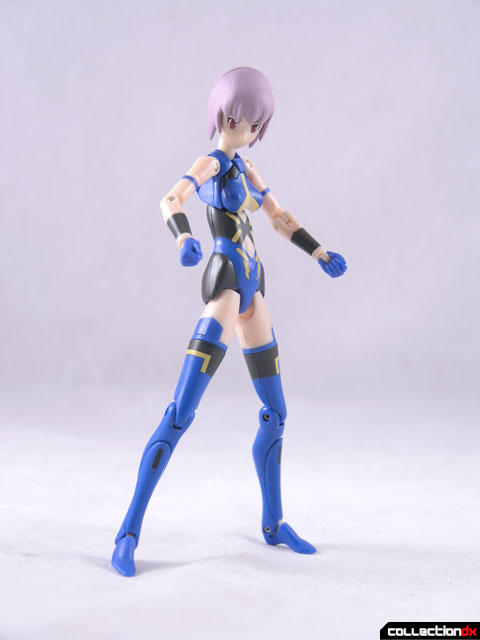 Busou Shinki figures are poseable female action figures that feature various kinds of attachable armor. Each armor set has a specific theme. In this case, this Espadia and the corresponding Beetle Lancamento are both Japanese fighting beetles. 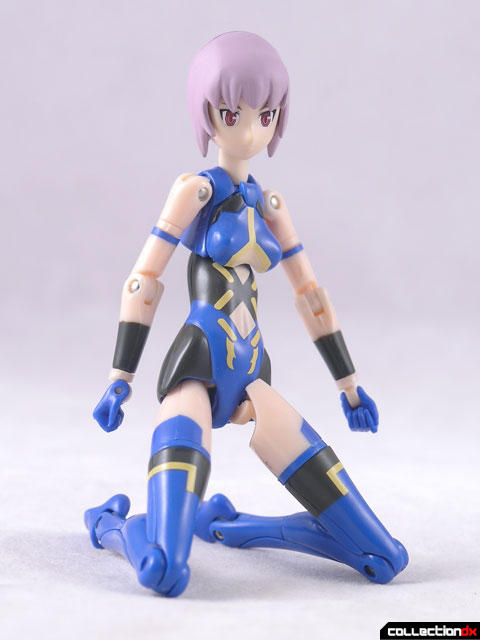 The armor design was done by Tanimeso, famed for his illustration work for "Rumbling Angel," "Zoids," and original robots in the "Super Robot Wars" games. 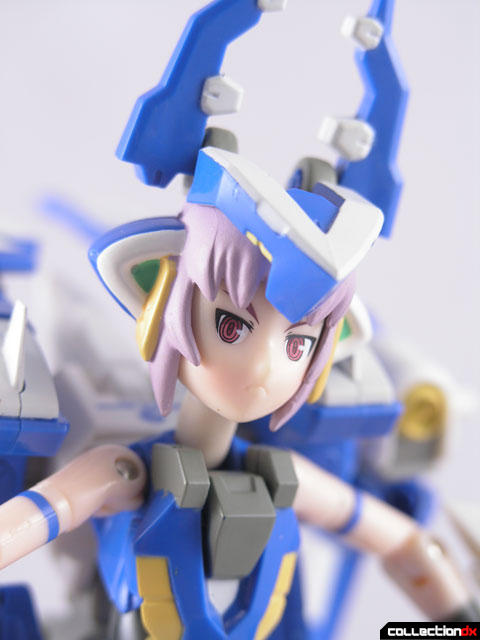 The core figure is super poseable, with a unique hip joint that enables a variety of poses. This figure appears to have tighter joints than previous releases, and also the feet on this release has a more rubbery feel, giving some traction when trying to stand it freely. 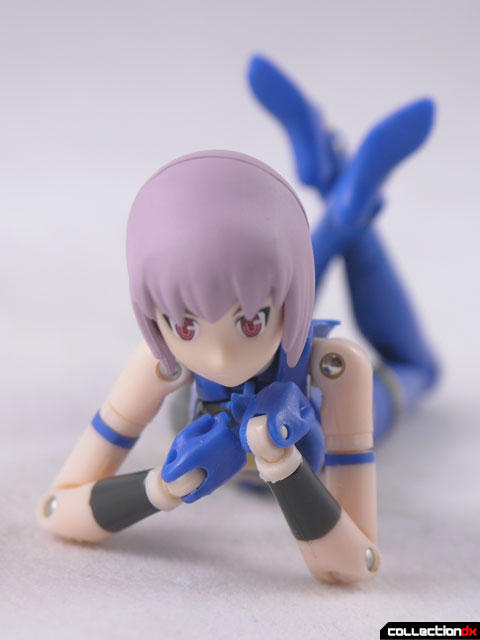 All of that of course goes out the window with the armor on. 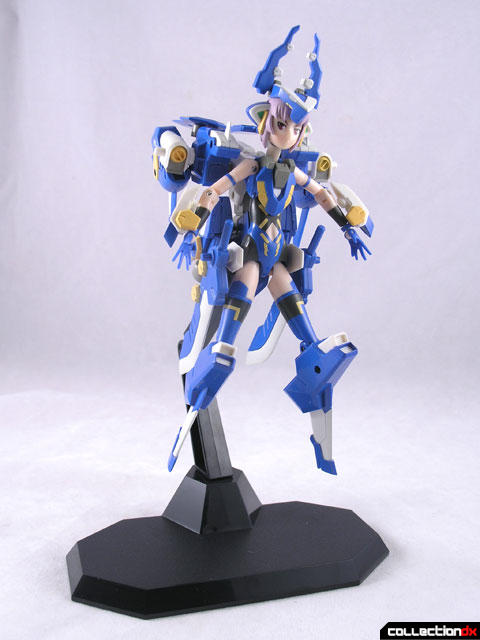 The feet of the armor are too narrow to support the bulky frame, making use of the included stand a necessity. 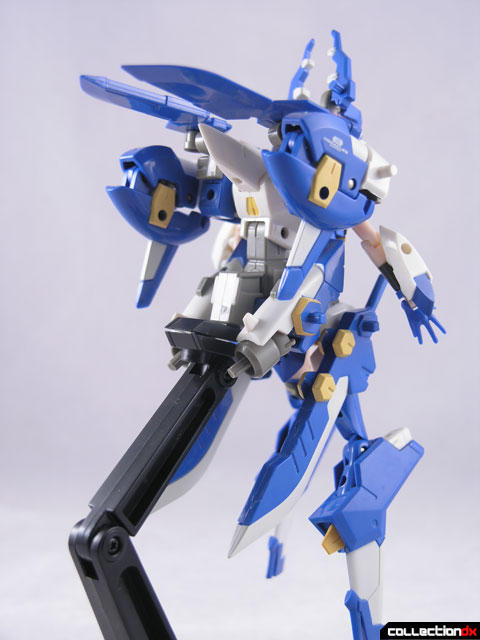 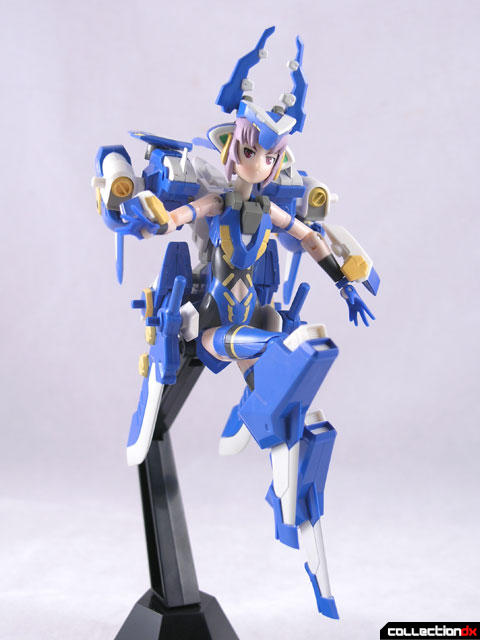 It takes a long time to get all the armor on, but once done the finished form looks pretty cool. Two large swords attach to the hips that can be held in either hand, or by the extendable arms on the armor. 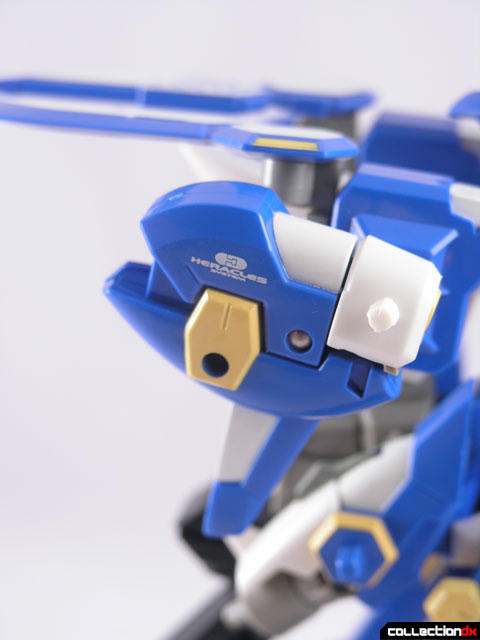 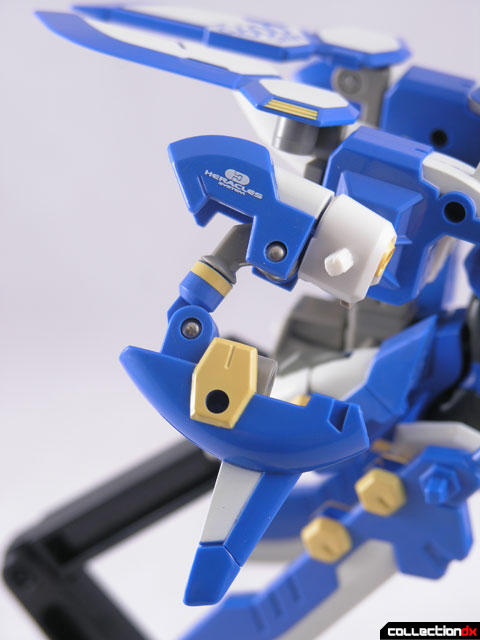 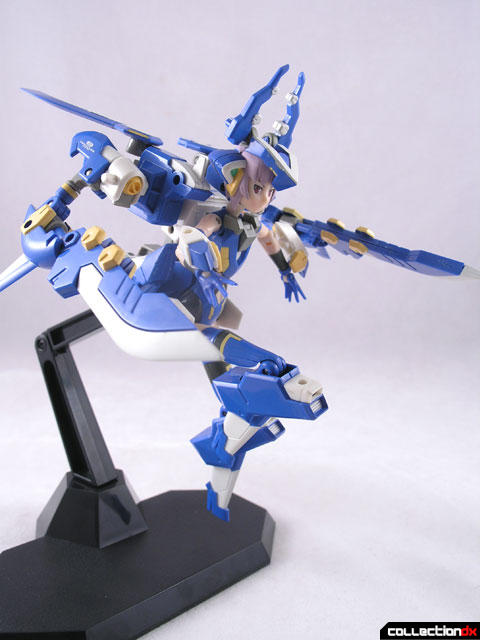 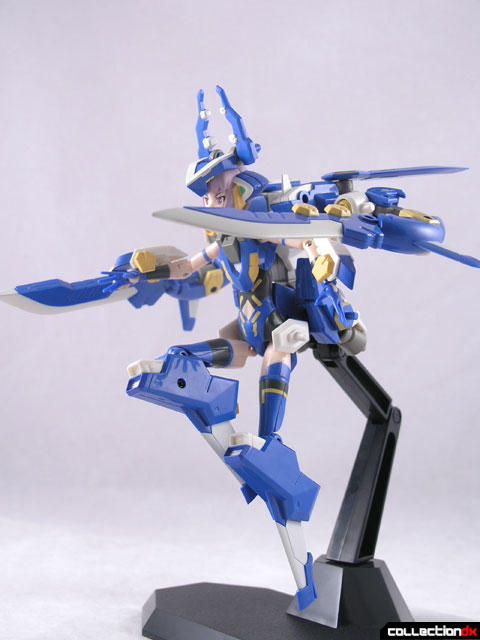 Also included is a sword. 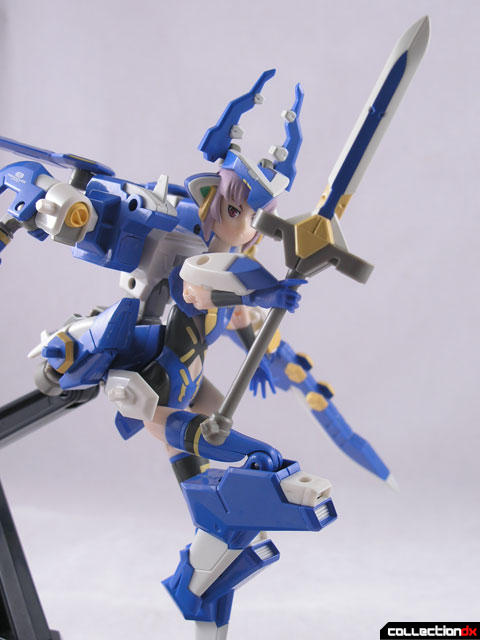 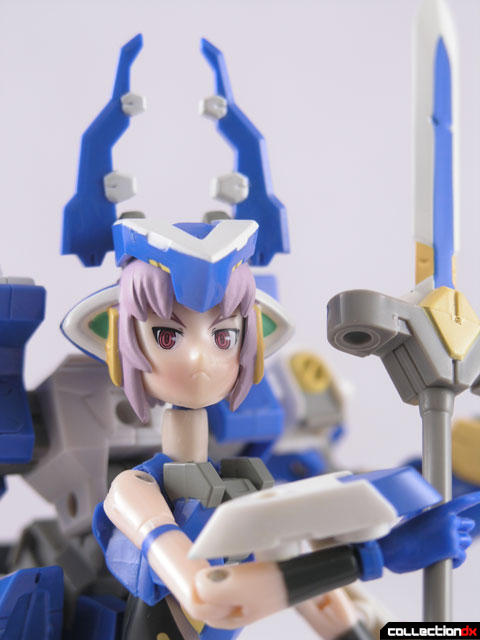 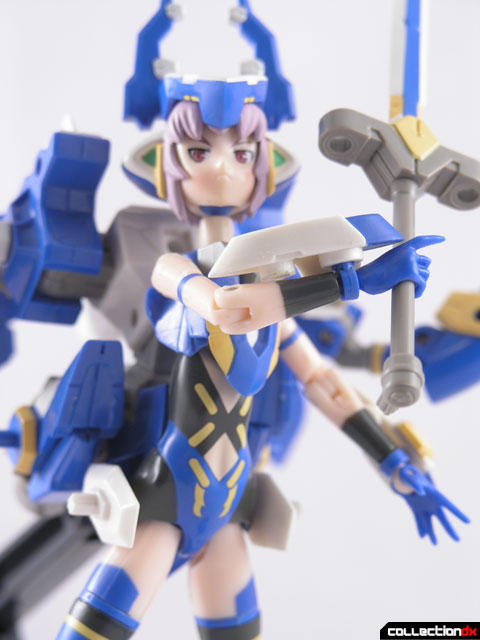 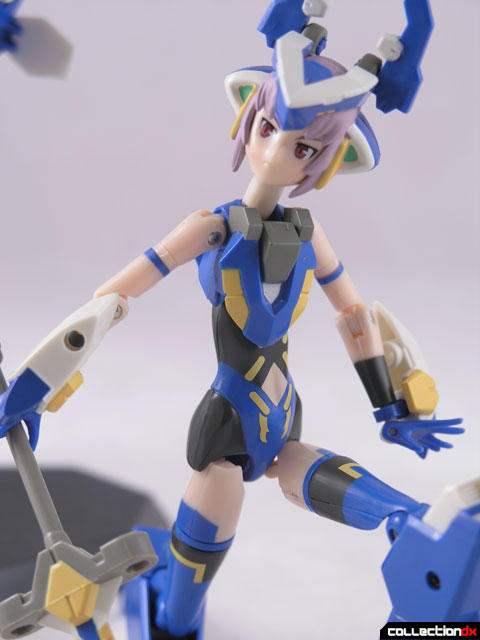 Like all Busou Shinki figures, the armor is meant to be customizable. Konami actually includes a few extra parts for even more creations. But this time Konami has designed the armor so that it can be transformed into a stag beetle! 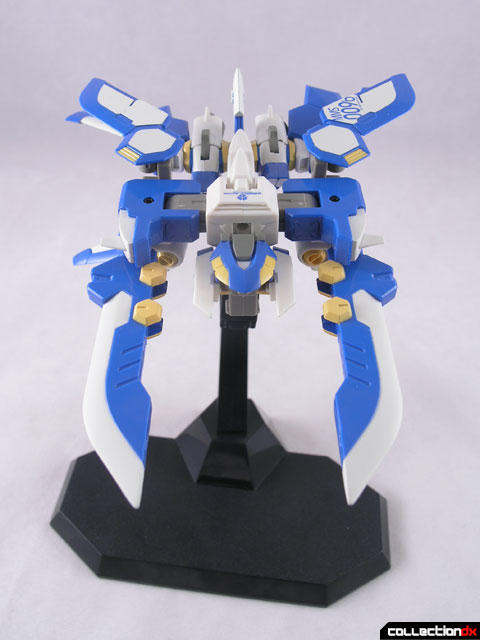 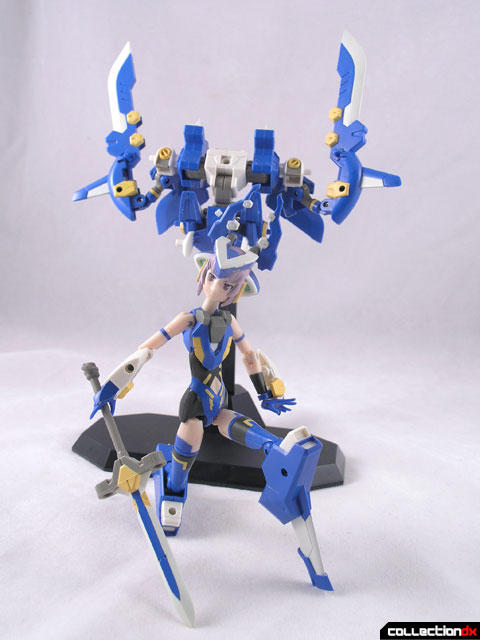 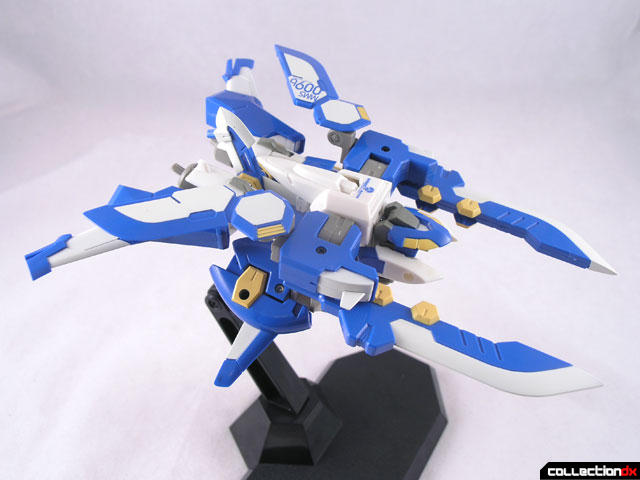 The beetle can stand alone or be displayed on the stand. 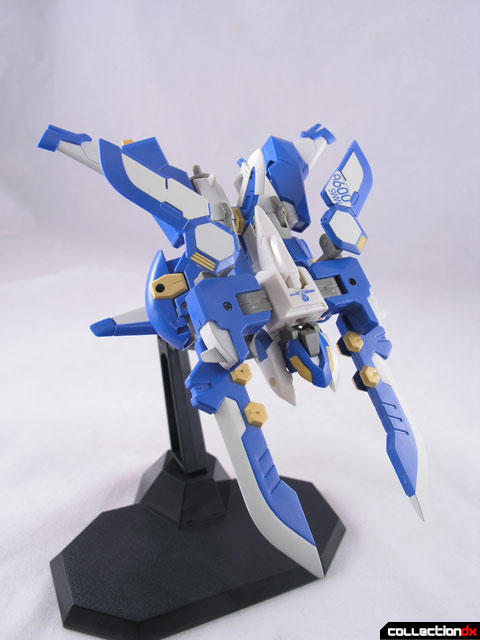 2 comments posted
Good timing with this

Good timing with this review, I've been thinking about buying her for awhile now.

I've seen the two figures in person (Lancamento and Espadia)and I have to say the girl figures are really nicely detailed like the Fraulein Revoltechs and are very articulated. The problem for me is the "mech" beetles- the configurations and how they look is a little "messy", no? When you combine the two mechs into Hercules it is even more of a "mess". The colors are so opposite (red/blue) and there's a lot of things hanging out. I wished the colors were more uniformed. The price tag also goes up since you feel like you need to buy both, clocking at about $90-$100 for both figures with tax and shipping. That's a lot of money for figures that does not have a lot of heft and have no metal in them. Just my observation.