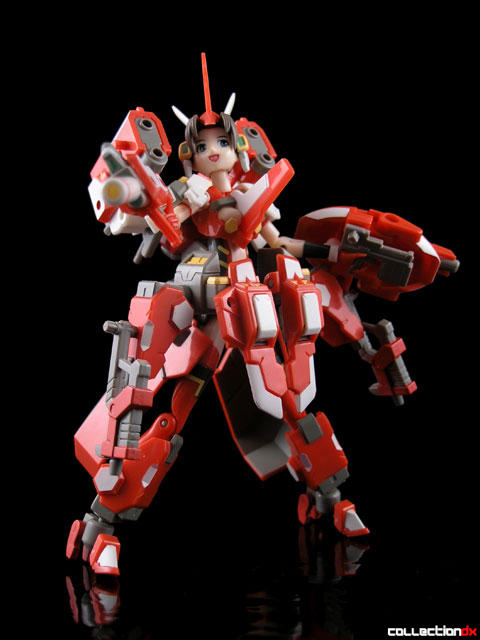 This figure, like all Busou Shinki releases, consists of a poseable female figure with removable armor. In each series, the armor has a specific theme, and for series 9, that theme is Beetle.

The designs for this series were done by Tanimeso, famed for his illustration work for "Rumbling Angel," "Zoids," and original robots in the "Super Robot Wars" games. 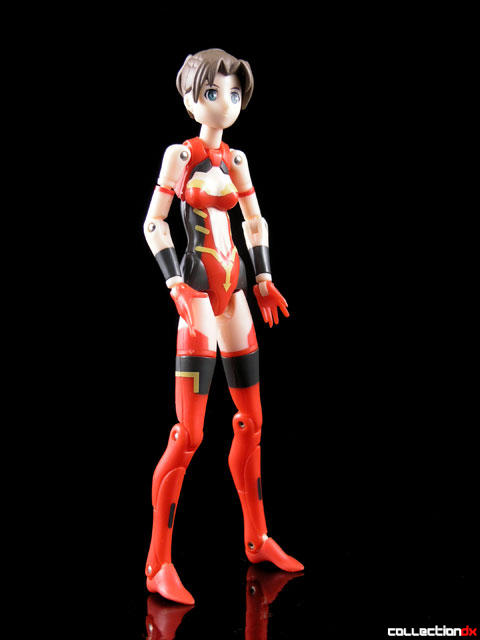 The base figure is essentially the same as any other MMS figure. Tall, lanky, and child-like. The head can separate so you can switch around facial expressions with the second included head. Each limb can be removed and replaced with bits of armor from the set. 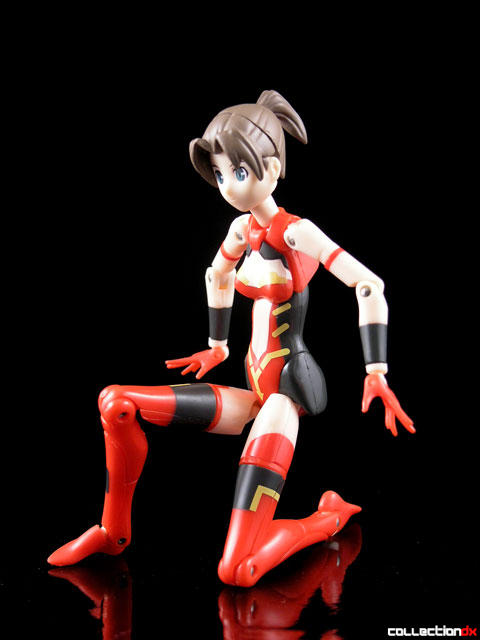 You can choose how you want to display your figure by using some or all of the armor. Here, I only used certain parts to create a light armor look. 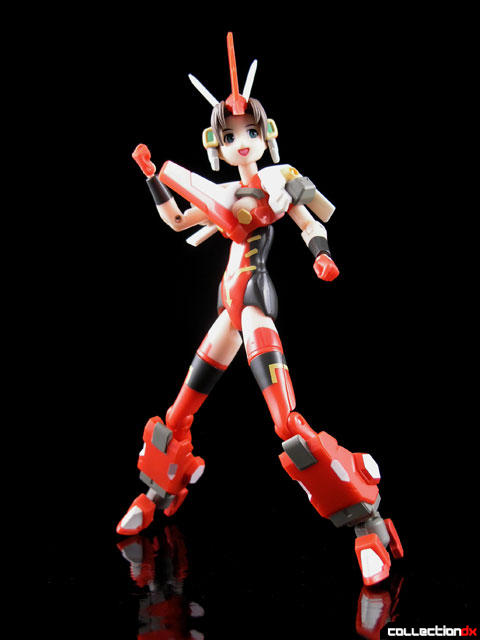 With all of the armor on the figure, she is incredibly bulky. It works though, even though it looks fantastically unpractical. 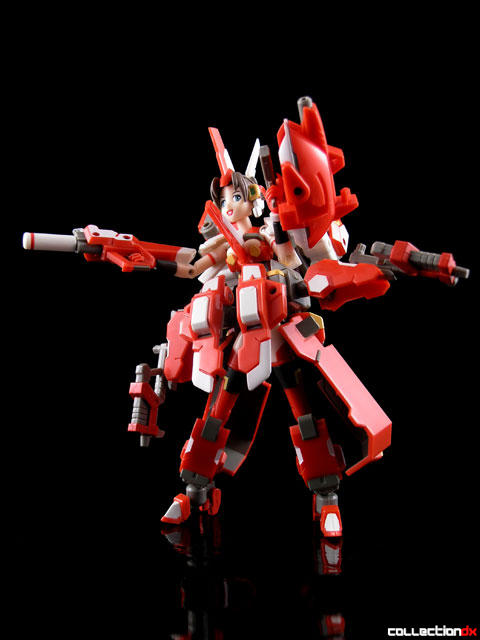 Lacramento can actually stand without the included stand, a rarity with Busou Shinki figures. 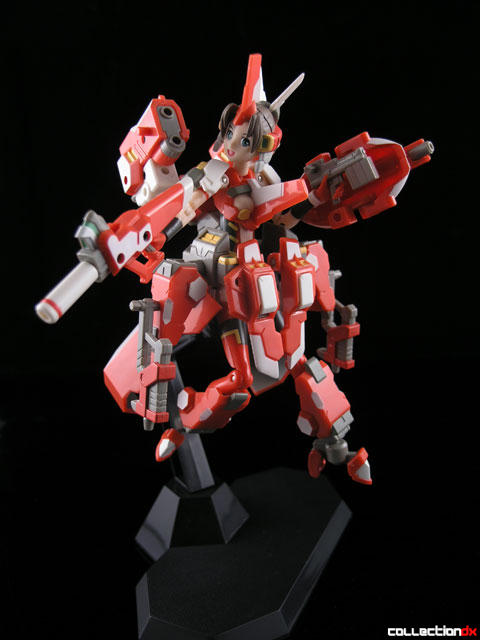 She is fully armed with a 1 short rifle, 1 long rifle, 2 pistols (stored on the side) and a shield. 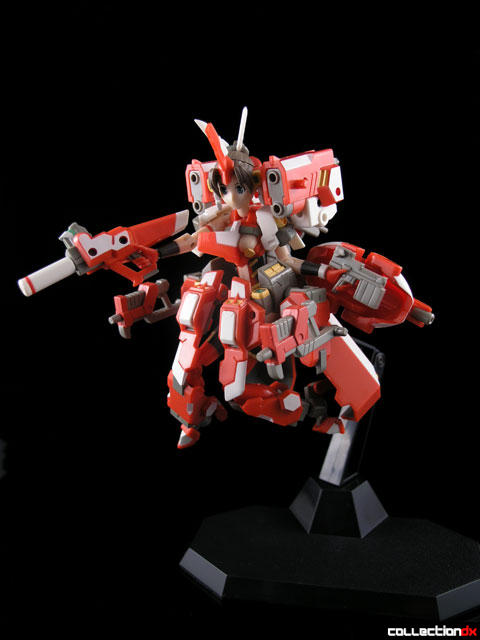 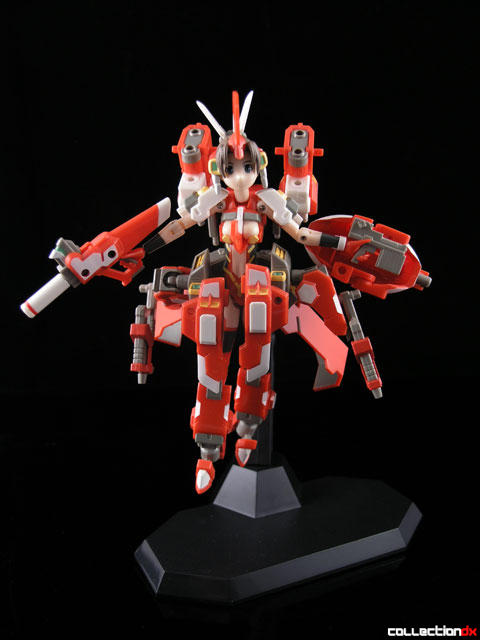 She is much too chipper in my opinion. I can't imagine that she is happy in all that armor. 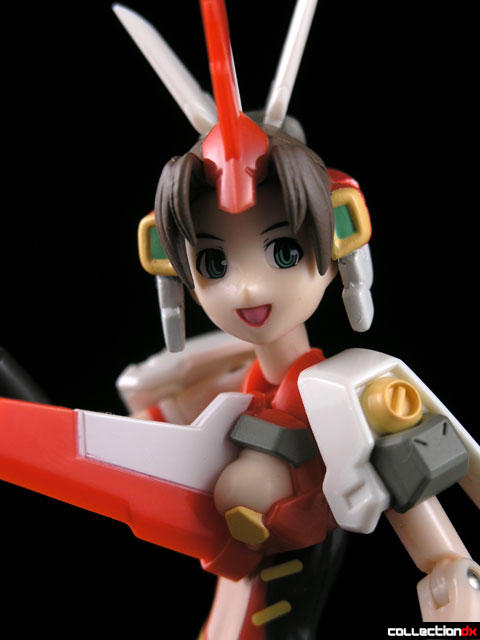 The stand enables more dynamic poses, but of course, you are limited by the design of the armor. The great thing about this (and other MMS releases) is that the figure is incredibly sturdy. Nothing feels as if it is going to fall off if you touch it.

With most MMS figures, the armor is just armor. But with the 009 series, each armor also has a second form, in this case, a beetle. In my opinion, this one looks more beetle-like then the Espadia. 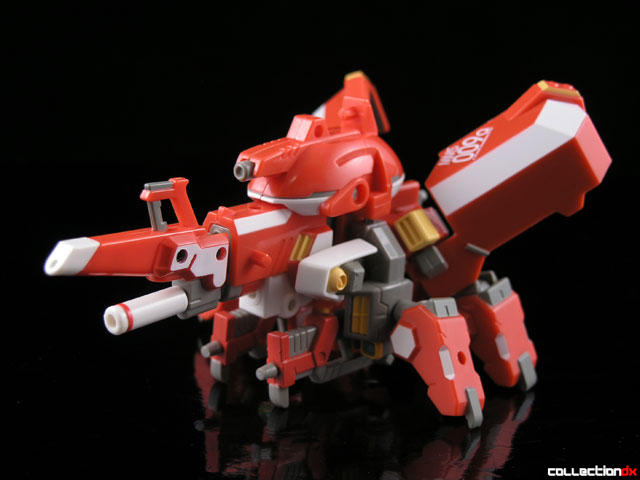 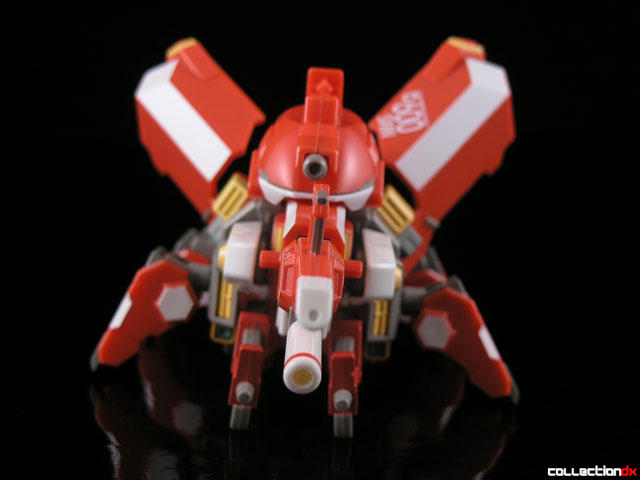 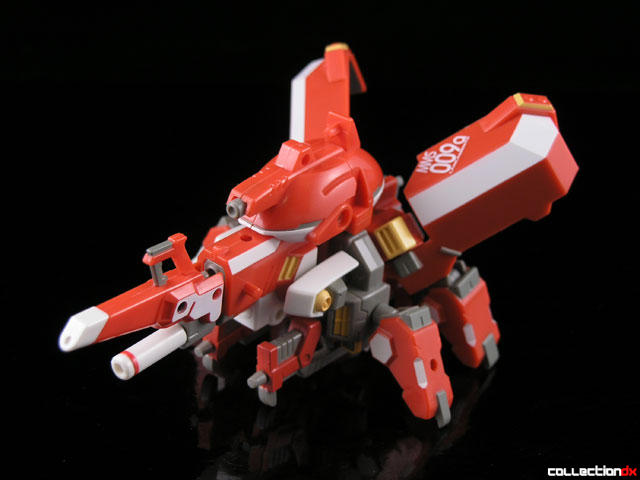 The beetle armor can be displayed on its own or on the stand. 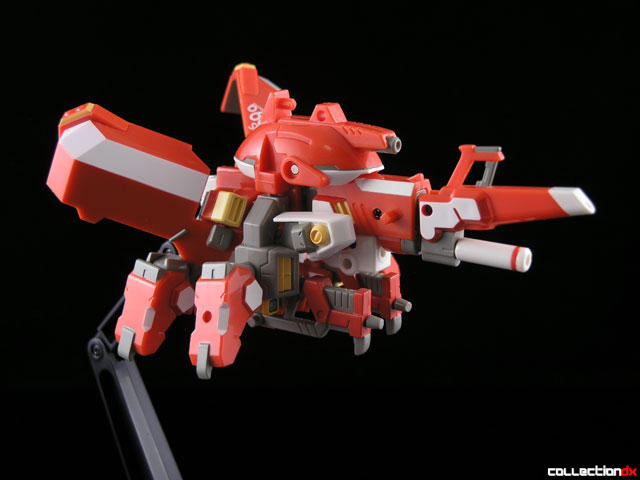 The real draw here is that the two suits of armor can be combined to form the Hercules robot! 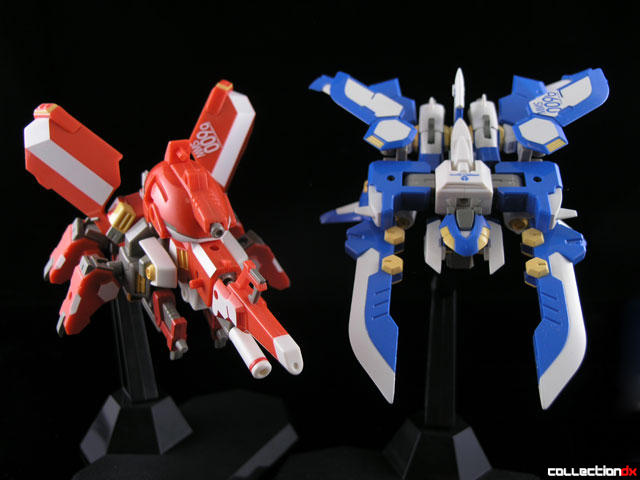 Combining the two is quite an exercise, and you definitely need the manual to do it. As you assemble it you realize why certain armor parts were designed as they were. 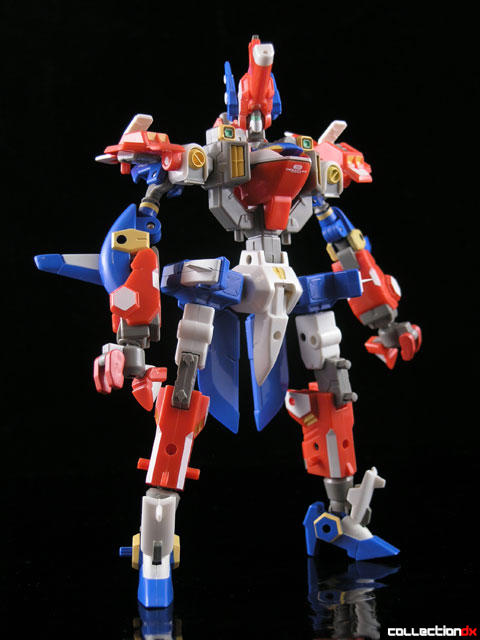 The combined Hercules robot stands at about 7.5 inches tall. It's reasonably well articulated, and it stands fine on its own. 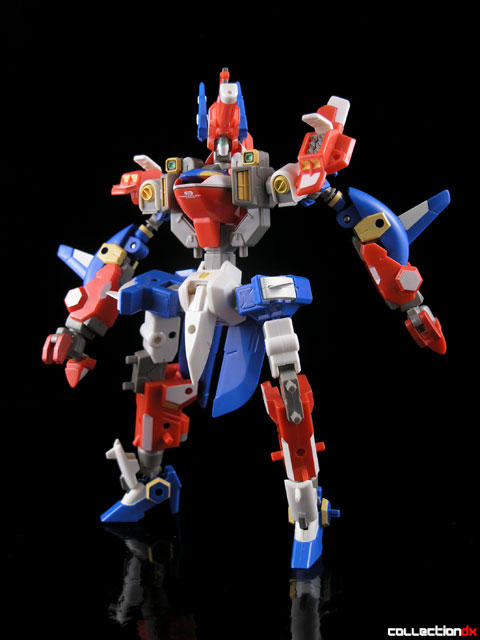 The three swords from Espadia combine here into one large sword. The claw-like hands grasp the sword by a peg at the end of the handle. 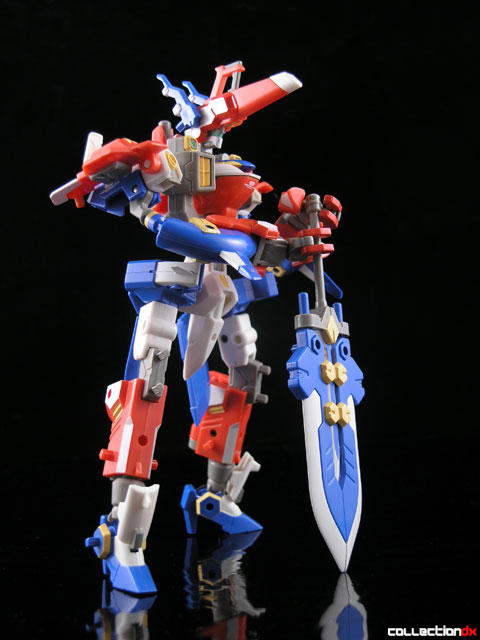 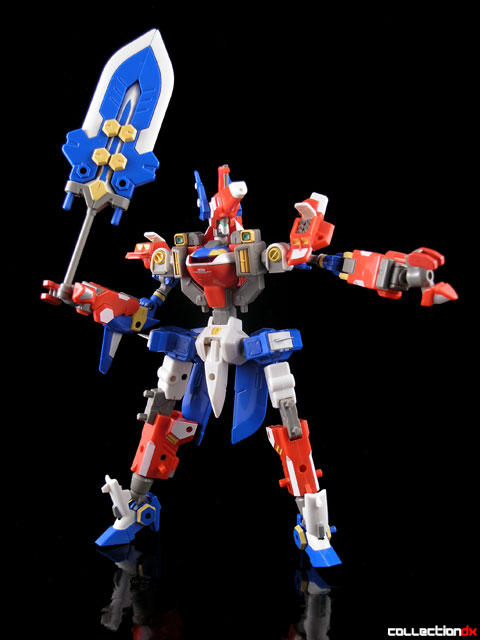 In the end, I actually ended up storing the MMS figures and keeping Hercules on display. He just looks really cool. He has a look reminiscent of the Machine Robo Mugenbine toys, a look I like a lot. I think its worth getting the set of two. You get hours of play value with the combining gimmick and endless display variations for your shelf. 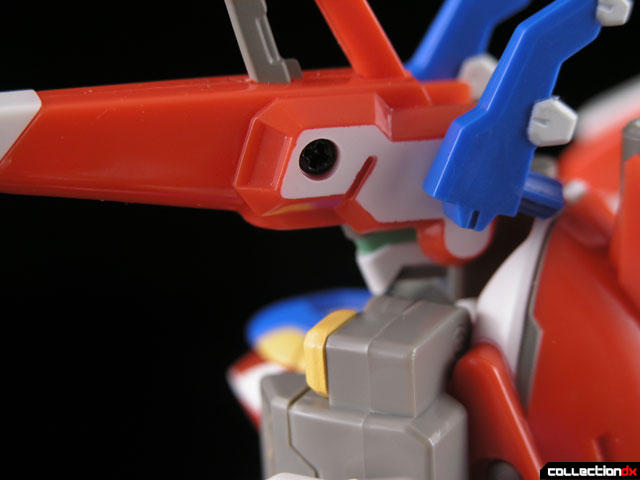 Fan service as in 1) traditional fanservice, which it understandably doesn't have, or 2) the fact it looks a lot like Alteisen or one of those many OG mechs?
---

(HE MEANS THE BOOBIES.)

How exactly do those not, uh, "pop out" when she's jumping and running and doing things?

Well, if you want to be technical, in the backstory they're all 6 inch tall robots to begin with so there's not all THAT much to bounce. Nevermind being made of plastic/metal.

I love how that one piece is right between her cleavage.

I want to get one but I don't know which one is worth it.

I wanna get these two mainly for the combined robot mode, which reminds me of something out of Medabots. If I would have to pick one...I'd think I'd go with this one. Simply because of the resemblance to SRW's Alt Eisen.

is it just me, or does she looks like AltEisen?