In 1986, the Shima Foundation secretly funds individuals to seek out and destroy stained-glass monsters called Fangire which feed on humans’ Life Force to survive. Though the Fangire Hunters are skilled in hand-to-hand combat, they are usually no match for the cleaver Fangire who can also disguise themselves as humans. That is, until Kamen Rider Kiva appeared… Over twenty years later, in 2008, the Fangire are still a threat, and the next generation of Hunters is tracking them down. A strange young man, Wataru Kurenai, is allergic to, and fears the world around him. And he lives to one day create the ultimate violin like his arrogant womanizing deceased father did. But Wataru must fulfill his destiny as the new Kamen Rider Kiva to protect humanity from the Fangire. And the Shima Foundation fears what the appearance of Kiva could mean, since he almost destroyed the world the last time.

Of the 13 Demon Races that inhabit the Earth, the Fangire have become the dominant one after beating the others into extinction centuries earlier. There are three that survived, each from a different race- Garulu of the Wolfen Clan, Basshaa of the Mermen Clan, and Dogga of the Franken Clan. They wandered the planet, the last of their kinds, quietly feeding on Life Energy from humans as well, but ever fearful of the Fangire. When Kamen Rider Kiva first appeared in 1986, they were ordered to kill him by the Fangire King, but they instead pledged their support to him for his protection. As punishment for siding with Kiva, each was banished into separate statues inside of Castle Doran. But rather than face complete extinction, they swore to help Kiva’s descendant when summoned. Garulu, Basshaa, and Dogga now live in solitude inside Castle Doran, and they are called the Arms Monsters. When Kamen Rider Kiva uses the Garulu Fuestle on his belt, it calls forth Castle Doran, which appears from out of its hiding place in a skyscraper. Once airborne, Castle Doran shoots the Garulu Saber in its Statue Mode towards Kiva. When he holds the statue in his left hand, he is transformed into Kamen Rider Kiva Garulu Form- whereas the Wolfen Clan monster impresses his personality and personal fighting style onto Kiva’s body, and his chest, left arm & visor all turn blue- the Garulu Fever The Majuuken Garulu Saber was introduced in Episode 4- “Reverie: Wild Blue”. Garulu’s voice, and human form Jiro, are performed by actor Kenji Matsuda. (He previously appeared in “Kamen Rider Hibiki” in 2005.) 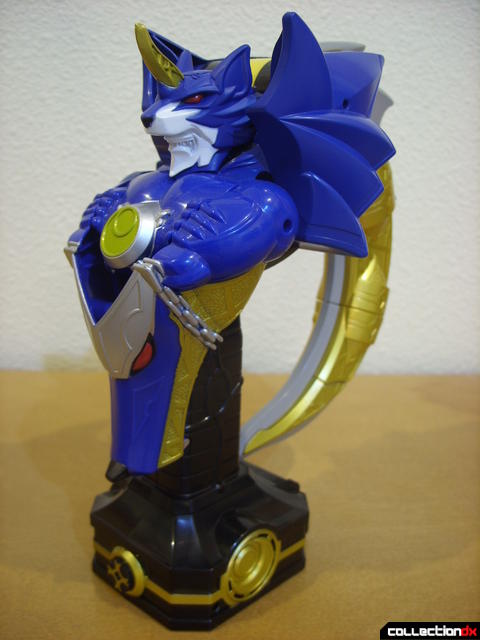 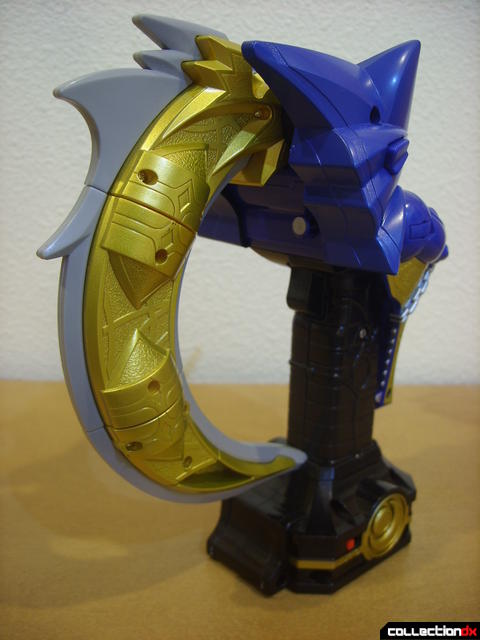 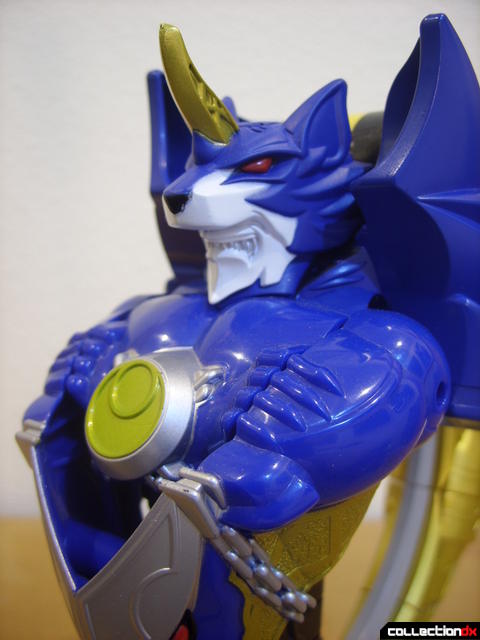 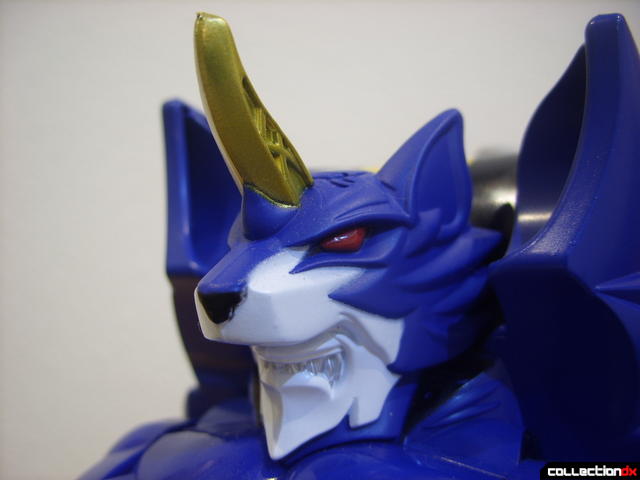 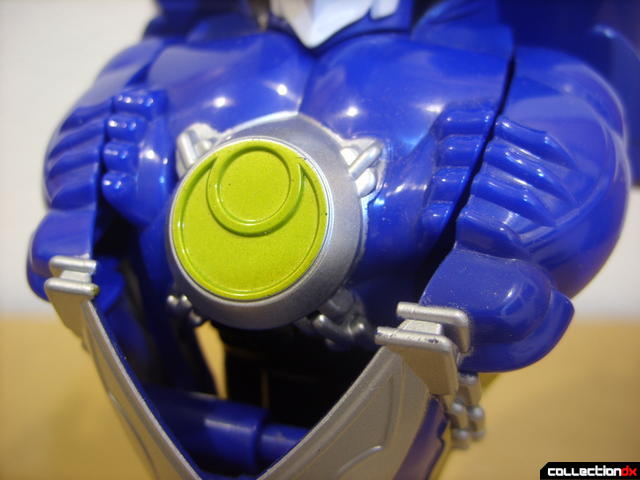 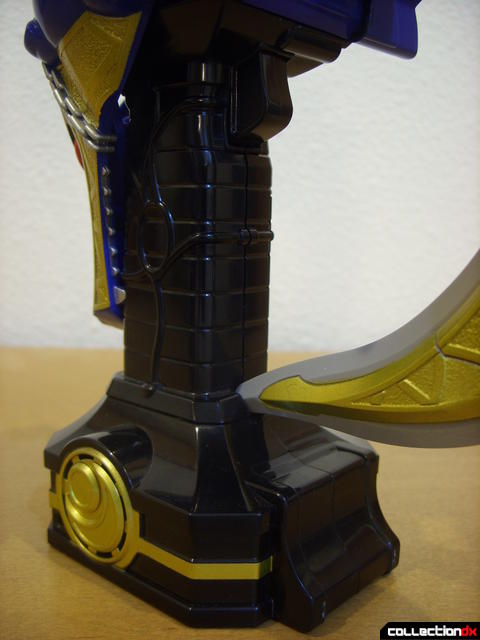 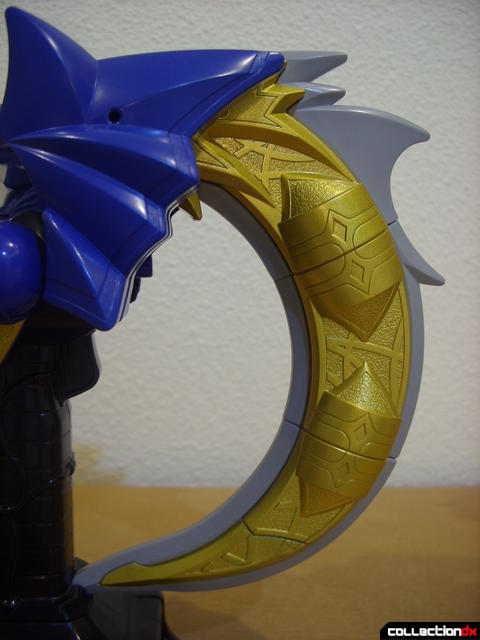 Transformation is simple: fold up the muzzle and jaw to form the guard, press the blue release button on the right side to swing up the crescent moon-shaped blade, and then manually twist the two sections of the blade 180-degrees. The changes to the blade and guard are manually achieved, and may be changed in any order you wish. 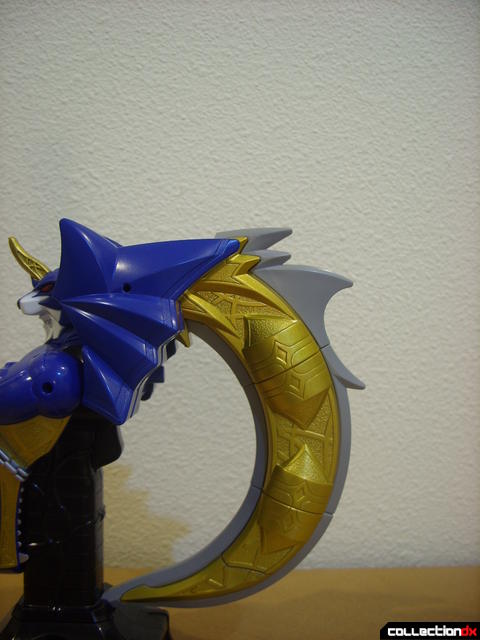 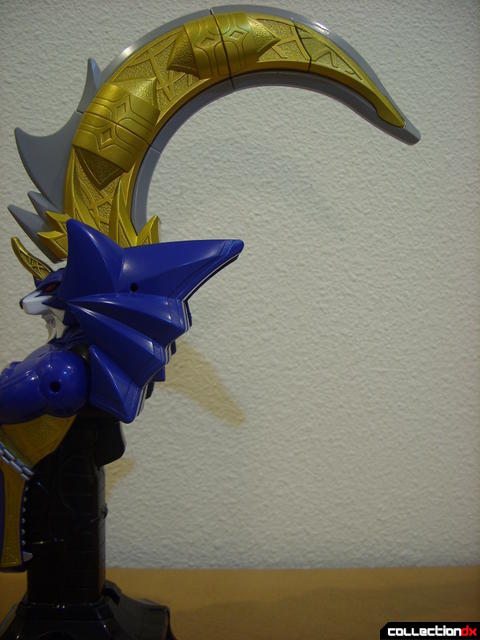 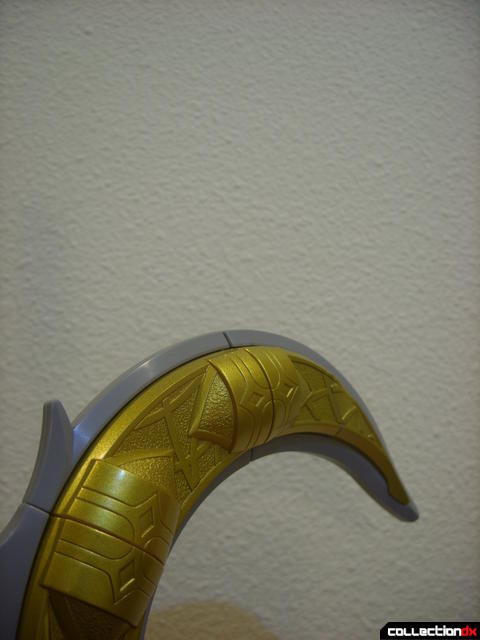 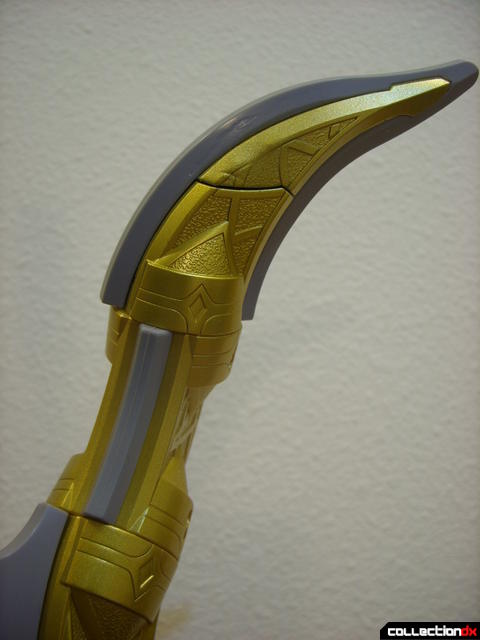 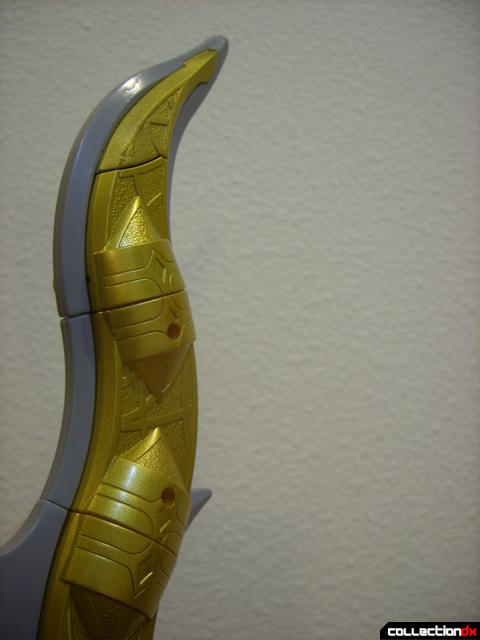 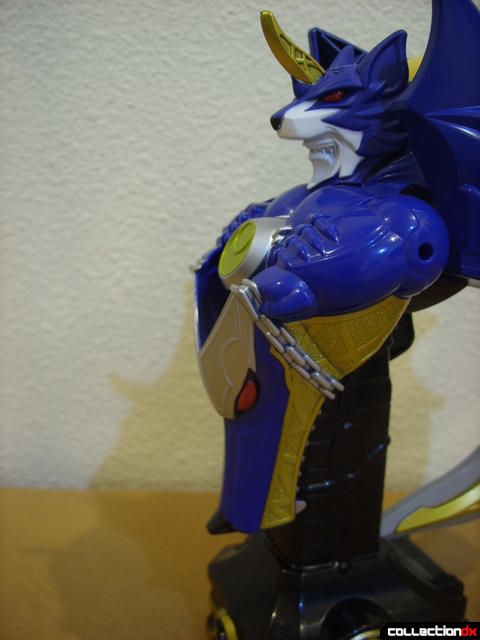 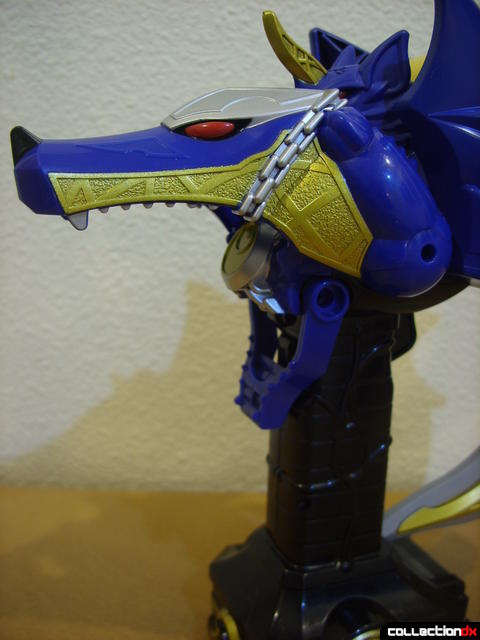 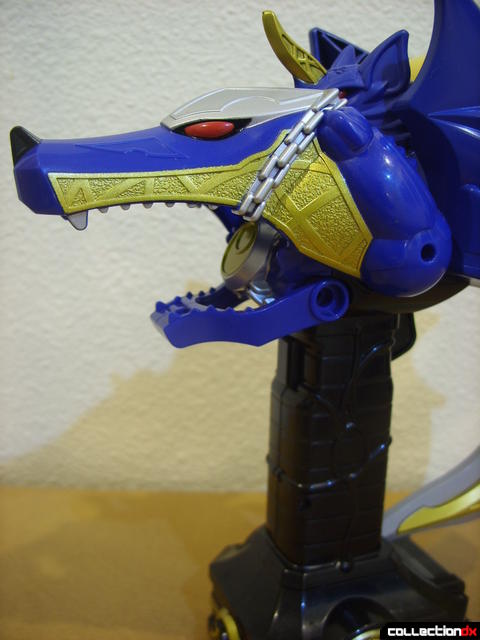 To restore the muzzle to the lowered position for Statue Mode, first push the jaw down, and then press the small blue button along the back of the guard; it will swing down via gravity.

This particular style of sword is known as a kris, which is notable for having an asymmetrical design to both the blade and hilt. 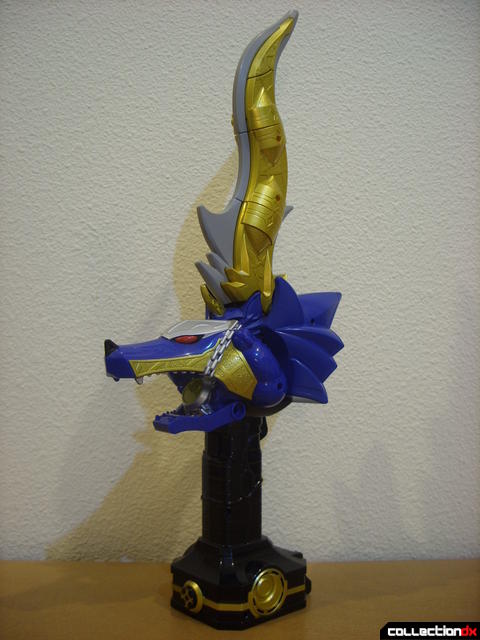 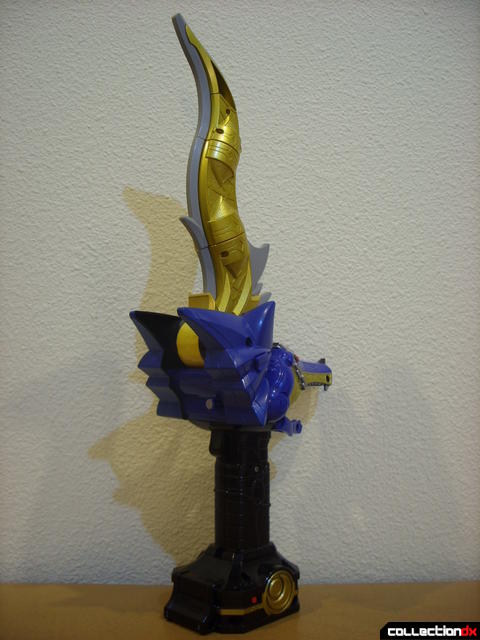 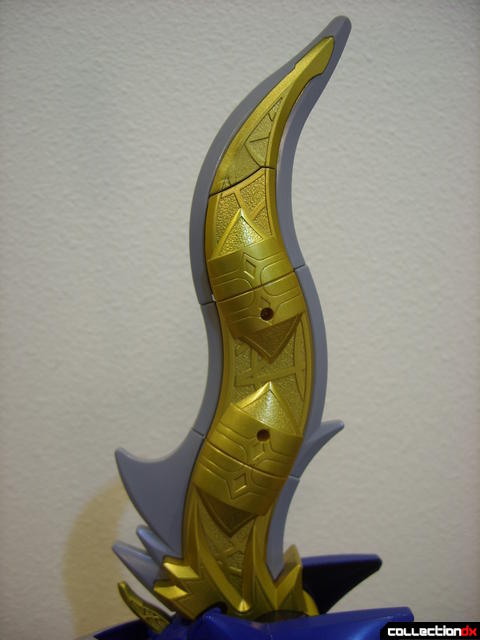 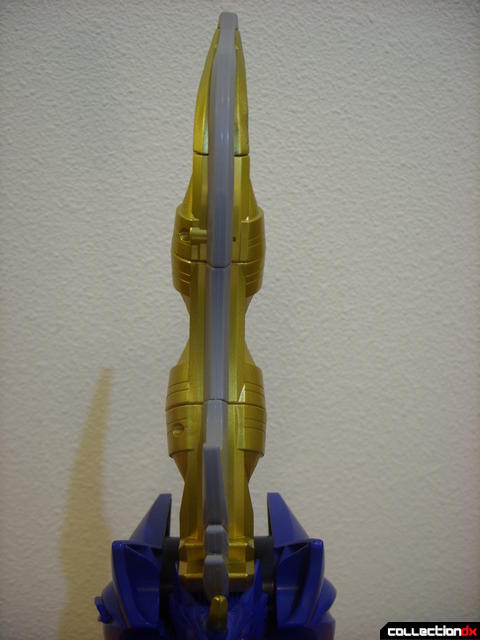 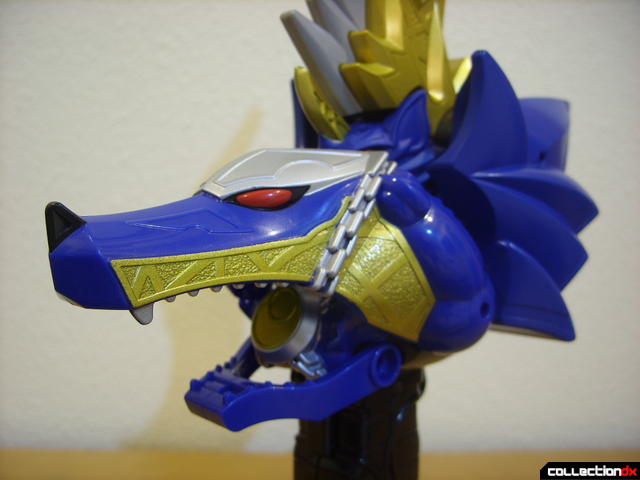 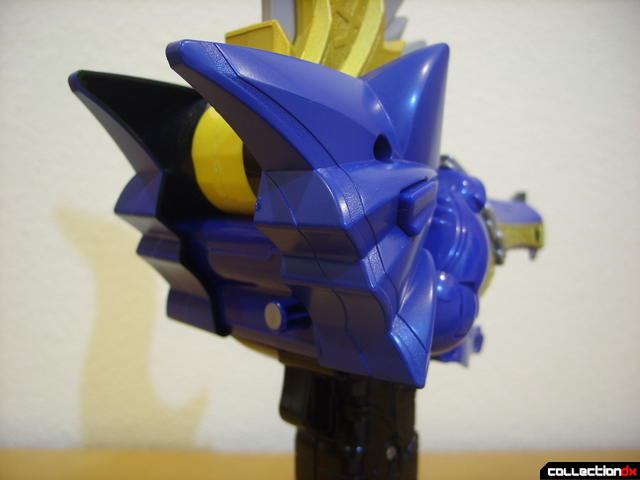 The Garulu Saber has a built-in sound feature. The speaker is located on the bottom left side of the grip, while the red On/Off switch is on the right. 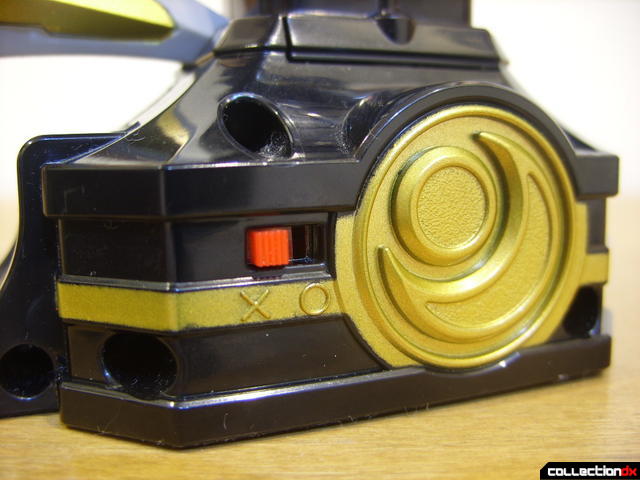 On the front of the base is a circular black button. When pressed, you will hear Garulu howl one time, two times, or three times in a row.

On the upper-back side of the grip is a trigger. When you grab on with your hand (Garulu Form is left-handed, BTW) you will be squeezing the trigger. This will create a different single howling sound. 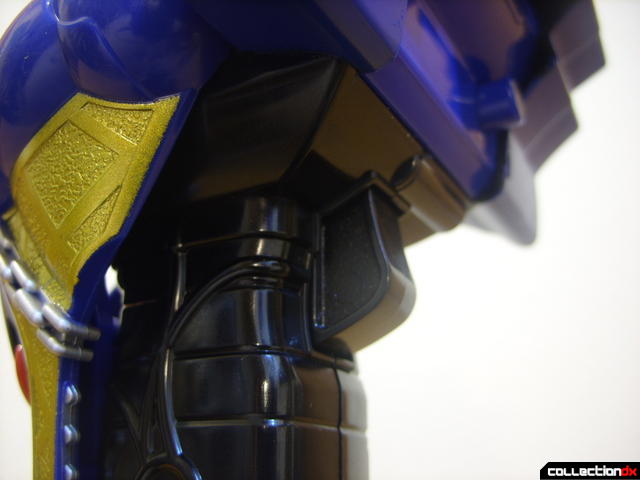 Once in Sword Mode, pressing this same trigger will raise the muzzle so that the toy can emit the Howling Shock sound-wave attack. (The jaw will not move unless you manually change it during the transformations.) 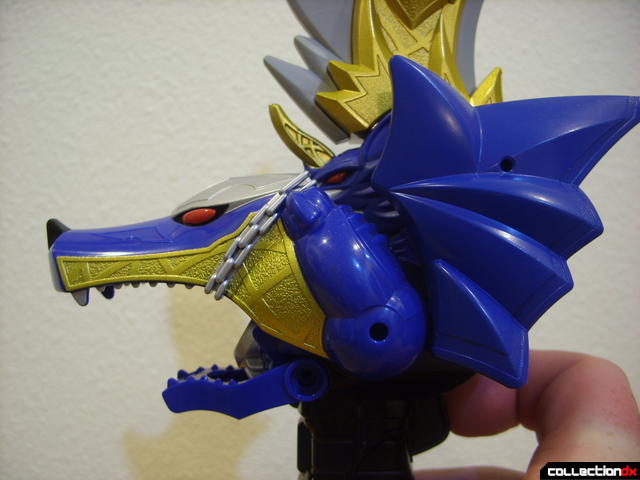 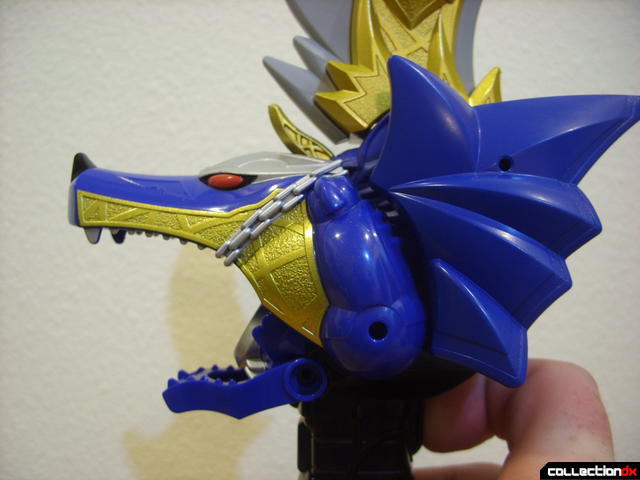 Directly below the jaw in front is a black trigger. When depressed once, you will hear one of two different sword-clanging sound effects.

While I cannot demonstrate it, the blade of the Garulu Saber can be placed in the mouth of the DX Kivat Belt set, though neither toy will react to such, and it cannot be fastened there; this is done to initiate the Garulu Howling Slash finisher (though I would strongly advise not putting the handle in your mouth as Kiva does for this…) 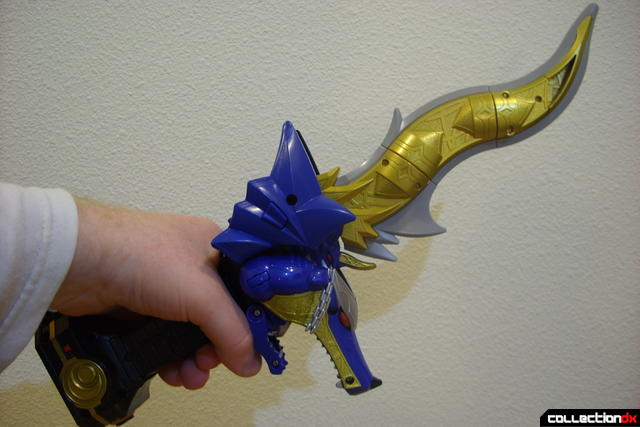 Despite not watching very far into “Kamen Rider Kiva” (the frequent switching back-and-forth between 1986 and 2008 was too confusing for me), I was impressed by the gothic, mysterious, and monstrous styling of the protagonist and his arsenal. However, this one was, I felt, the most cohesive of the three beginning alt modes at Kiva’s disposal (the others being the Makaijuu Basshaa Magnum and Matettsui Dogga Hammer). It was very awesome to see a sword being used that didn’t have the typically-seen long thin katana-like blade or a more Western design- a kris fit very well with the themes. I also enjoyed the collapsed form since it features Garulu’s crossed arms chained down; a sign of his binding oath to Kiva. And really, I just felt it looked better in statue form that the other two did. My only problem with it lies in sword form- the muzzle and jaw to cover up the werewolf monster’s torso and head, which the prop in the series does. The transformation is a little stop-and-go, but otherwise not a problem. Nor were the sound effects lacking. (It would have been cool to have the monster’s eyes shine red through the guard’s own, but I don’t miss any lights here.) This is a very solid toy both aesthetically and manufacturing-wise. So I strongly recommend getting the Majuuken Garulu Saber.

I like your new style Eva. More pictures = better.

I know what you mean about the timeline switches getting confusing. I spent the early part of the series being entirely baffled by what was going on and when, it does get better though once the characters in each timeframe are more established.

I worry less about the pictures, and more about how I can still deliver info now without losing context in cutting the size of the paragraphs down; that will take some getting used to.

Neat. I couldn't get into the show (too much fighting, I prefer Heisei KR-style four-minute fights) but the mecha (especially the Shinken-oh and the lobster Origami) are beautiful. Now I get a reliable review of it, huzzah! 'Cause I really think it looks awesome, certainly.

Also, I know you tend to shy away from the BA products these days, but have you ever looked at their Micro Zord line? They're pretty damn awesome, considering their size (judging from High Octane and all of the Fury ones). Even the BA original designs are neat.

I'm actually questioning whether to get anything after the Ika Origami. The lantern doesn't look like a lantern that much, both of the lobster's modes are questionable, and the new ox breaks the chain of continuity once again.

Bandai- stop making toys that have nothing to do with the earlier-line stuff! If your lead combo is nothing than wildcats, then the whole line better damn-well-be nothing but wildcats! And inanimate objects don't count either!