This is my first review for CollectionDX. Also this is my first time using a digital camera, so be kind (I had to borrow my older brother's one, but I plan to get one for myself soon). 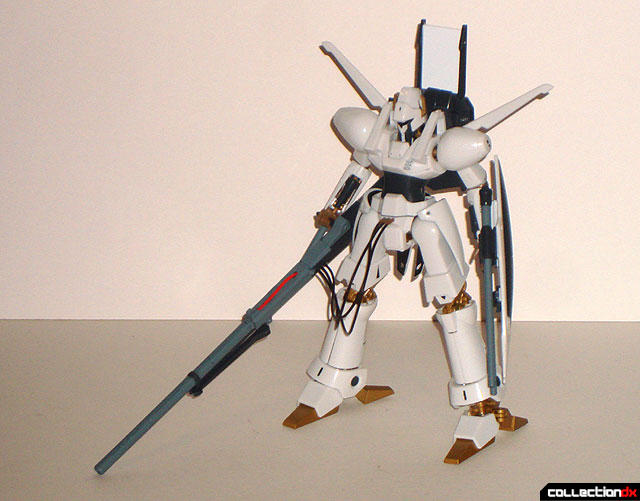 L-Gaim is from the 1984-85 (and 1987 OVA) Heavy Metal L-Gaim, which was directed by the famed creator of Gundam, Tomino Yoshiyuki, and the mecha designer, Mamoru Nagano, along with the OP and ED by MIO and produced by Sunrise. The story is about a man named Daba Myroad, who pilots a white Heavy Metal called L-Gaim, created by his father. Along with his allies, he leads a rebellion against the leader of the Pentagona System, Oldna Poseidal.

Although it's tough to say who my favorite mecha designers are, one of them is definitely Mamoru Nagano. He is excellent at combining fantasy with mechanical realism. L-Gaim is one of my favorite designs from him, so when they announced making an SOC SPEC of it, I was very excited.

When I got to open the box and play with it, on the one hand I really liked this figure, but I felt that they were various problems (both engineering and missed potential).

The figure itself stands at 6.5 inches, which surprised me since that was larger than I thought it would be. It's bigger than the standard 1/144 scale, but smaller than 1/100. 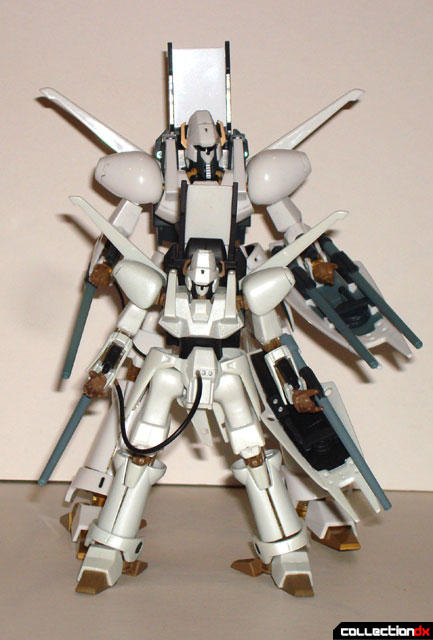 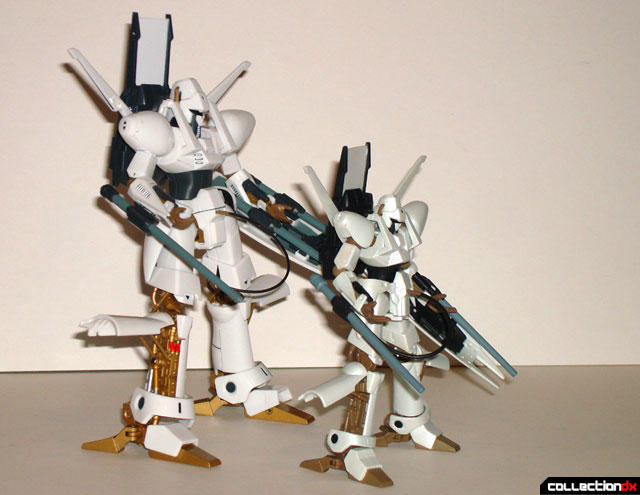 The articulation is well done. There's a single elbow joint, plus the part a little further up in the arm that bends, but due to the design, it can't bend more than 90 degrees total. Shoulders are able to bend in all directions, plus side to side, but I feel they're a little looser than they should be. Interestingly, there's a spring in the shoulder which, when the arm is raised, it presses in. Nice. 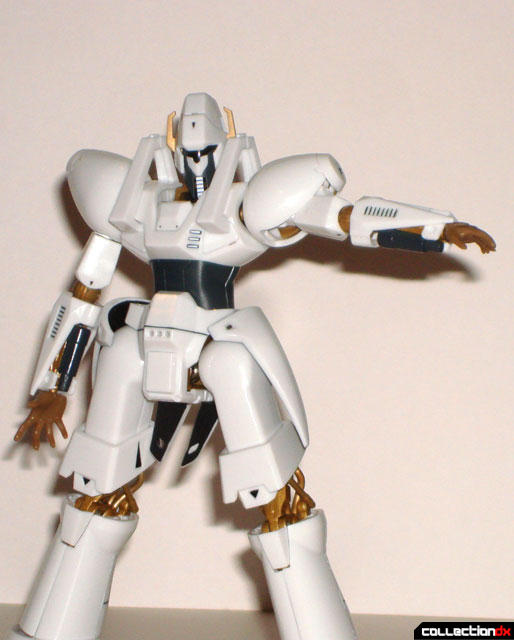 The head moves, but not a lot; just enough to turn the head and tilt a little up and down. The waist can move well, but since it's covered by a rubber "sleeve", it won't be a super amount. 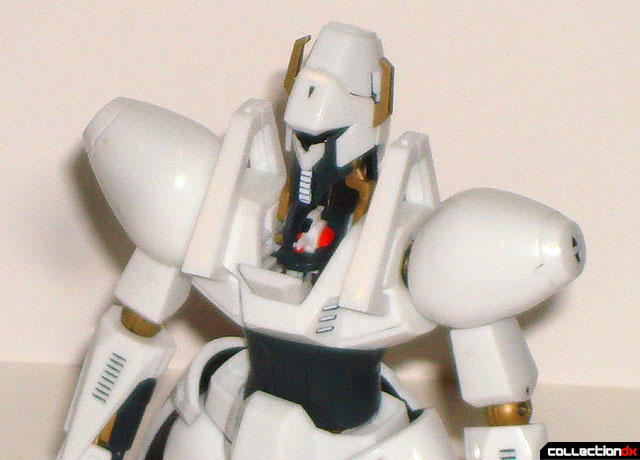 The real treat is the legs, but even still, they aren't without fault. The hip on the right side is floppy in the up/down joint (not the ball joint). It's annoying to pick up and have the side dangle like that. The knees have several joints which extend. The bottom-most knee joint (especially on the left leg) is VERY tight. Be careful with the knee cables since they slide out. Don't pull them too far; they're hard to put back in. 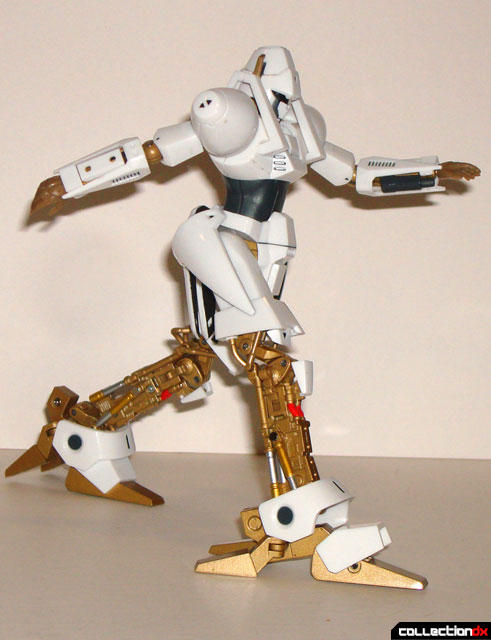 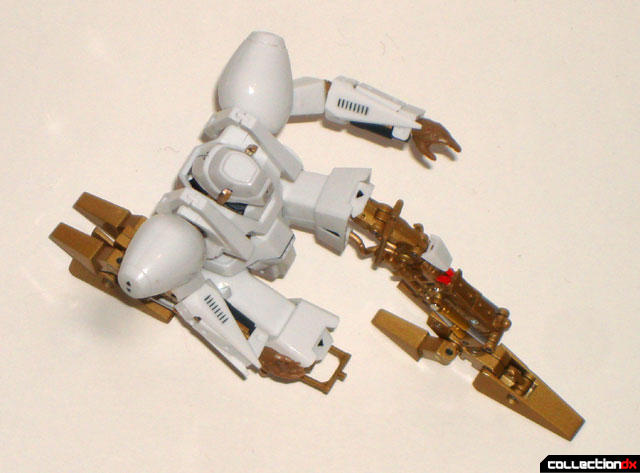 The feet are CRAZY articulated. Although the ankle ball joint is tight, it will rotate. What I really like is that there's an extra joint that makes the toes point up or down. SO GOOD! 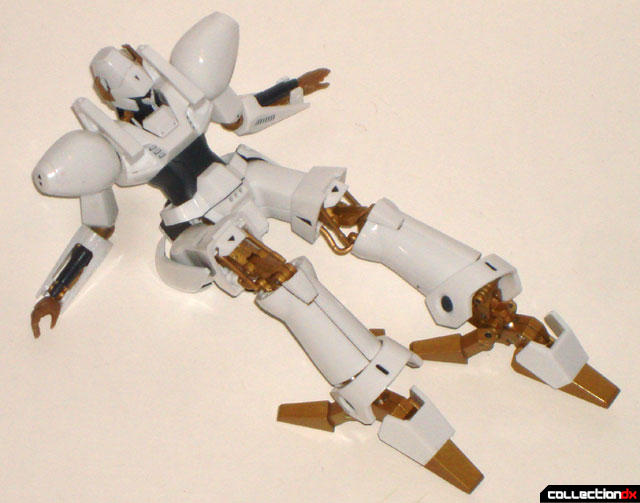 The metal content is quite decent. Mostly the lower legs and feet, but also inside the waist and torso, plus the lower arms. The chest can open up to put in the little hover jet called the Spiral Flow. It also comes with a regular one for show. They're VERY small, so be careful you don't lose them.

One of the coolest things about the L-Gaim design is the ability for its armor to be removed to reveal an internal skeleton. When news of it being put in the SOC SPEC line hit, I was excepting it to be like the previous SPEC releases which had that ability (especially the Dragonar ones). Sadly, the only armor that can be removed is on the lower legs. You can raise the panels up and lay the pistons in the slotted grooves. Be careful, since it has the tendency to pop out easily at times and is only held by a small clip. To expose the whole lower leg, remove those side panels, plus the covers to the ankle and foot. 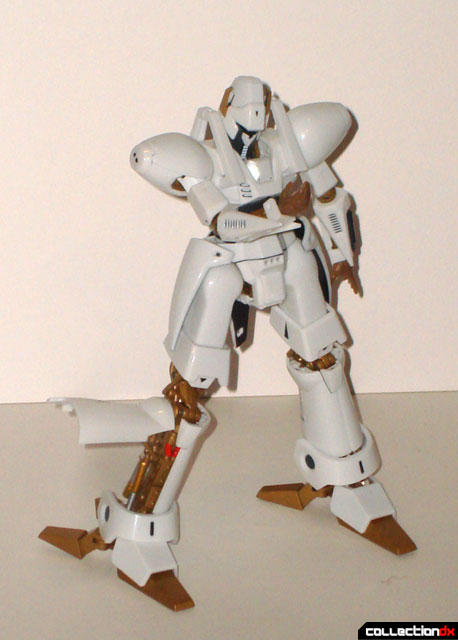 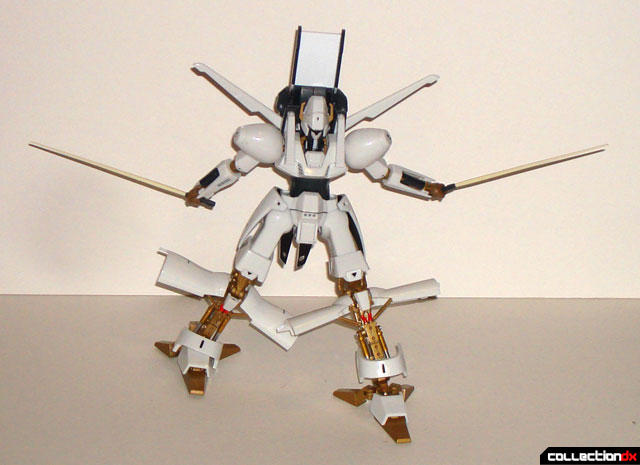 Weapon assortment is quite nice. It comes with three arm cannons called power launchers, four regular lancers (what the beam sabers of the L-Gaim world are called), two double "Darth Maul"-style ones called hand launchers, two S-mines and of course, the big Buster Launcher cannon with power cables. I've read that Mamoru Nagano is a fan of western rock like LED Zeppelin (possibly where the name, LED Mirage, of Five Star Stories came from) and you can totally see that influence in not only how the cables plug into the groin area of L-Gaim like that of an electric guitar jack to a speaker, but also in the way that it holds its huge cannon like a guitar. 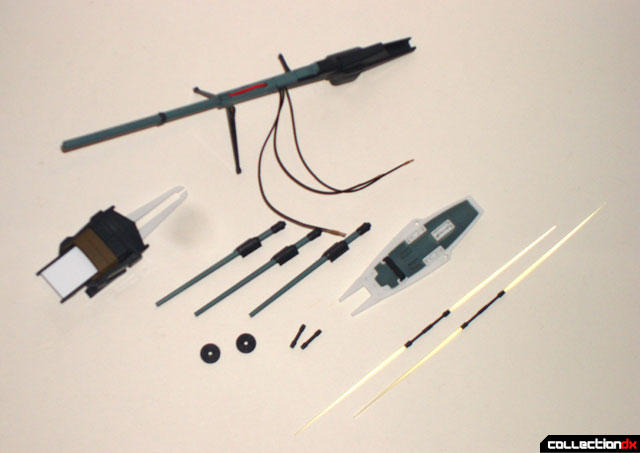 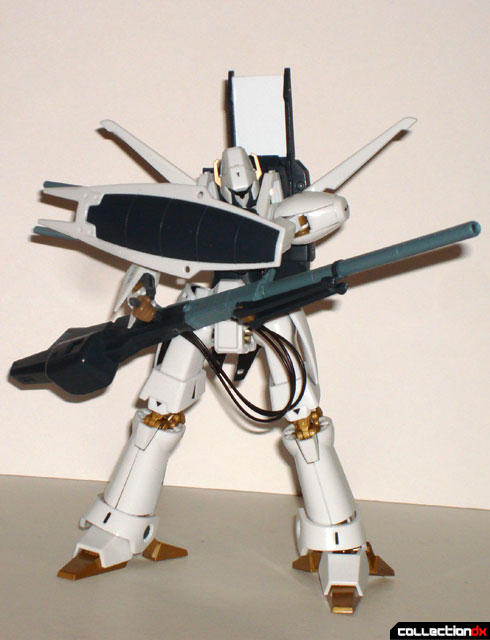 The shield here is called a binder which holds the two of the lancers and the S-mines. The back pack is called a Landbooster "Right". The two other lancers are stored in the forearms. It comes with what I consider the right amount of hands. A pair of closed fists, fists for holding weapons, open palm, and outstretched finger hands. The hands hold the weapons just a bit too tight and it's tough to get either the cannon handle or lancers out once in the fist. 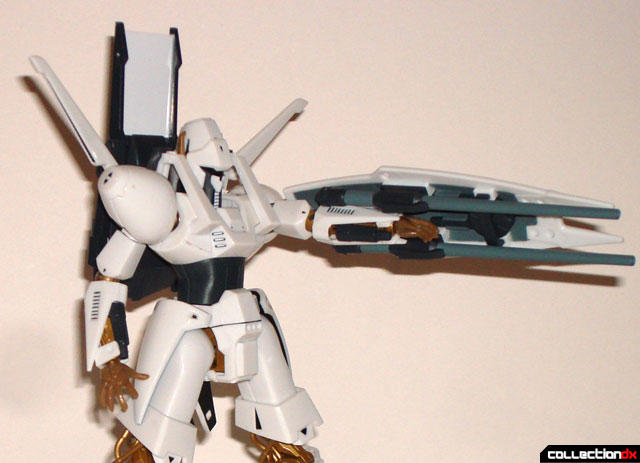 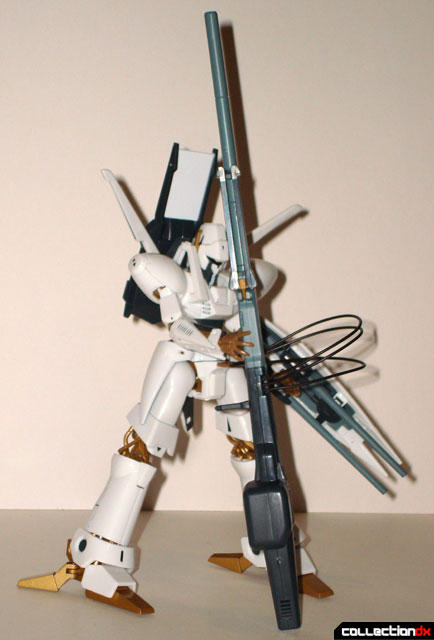 Like most Soul of Chogokin releases, they like to throw in something extra. The extra here is a small ABS plastic kit of Lilith's imaginary friend (it only appears for a brief period on a computer screen) called LilisGaim. It's on four sprues, is really easy to put together, and is pre-painted. It comes with three little weapons and a shield. It's a cute extra, but I felt like I'd rather have something more of use to the L-Gaim figure, itself, like the Works platform of the Spirit land booster instead. Only its arms move up and down. 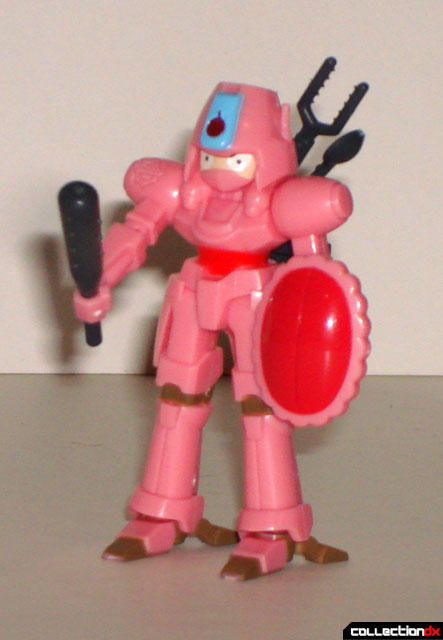 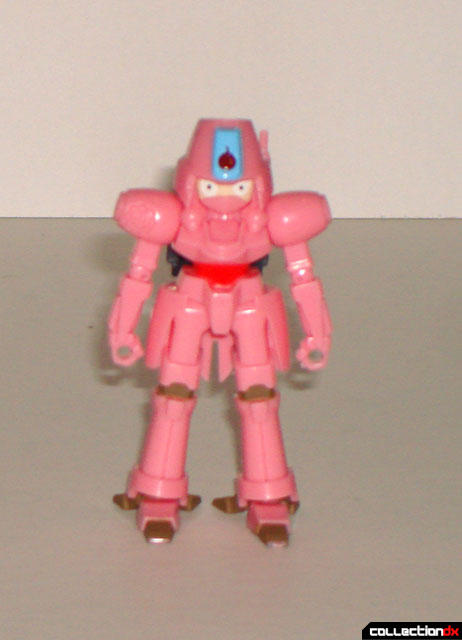 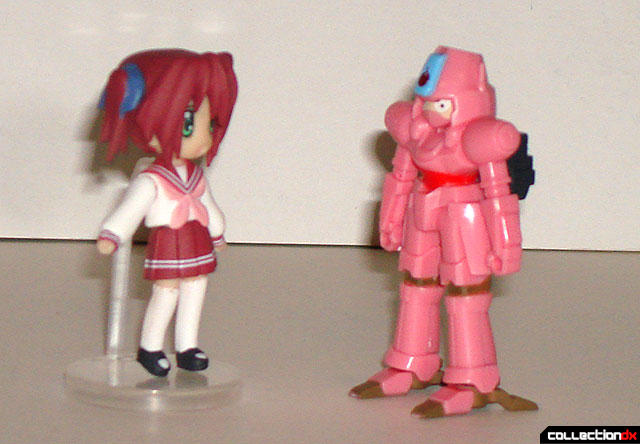 Overall it really comes down to "How much of an L-Gaim fan are you?" Although it's a nice figure, I feel that it really could have been much more. I would have liked it if they gave it the ability to shed its armor to reveal the WHOLE internal metal skeleton, plus it would have been neat to have had a big Works platform or the Spirit (although that might have made it more expensive). Still, I'd gladly pay a little more for more of the armor to be removable. I wonder why Bandai decide not to go fully on that feature when the other SPEC releases were able to do it so well. In the end, I say this is one for mainly L-Gaim fans but less so for chogokin or casual robot toy fans. L-Gaim is one of my top favorite mecha designs, so I would gladly buy it anyway, and it does really look good in the long run. 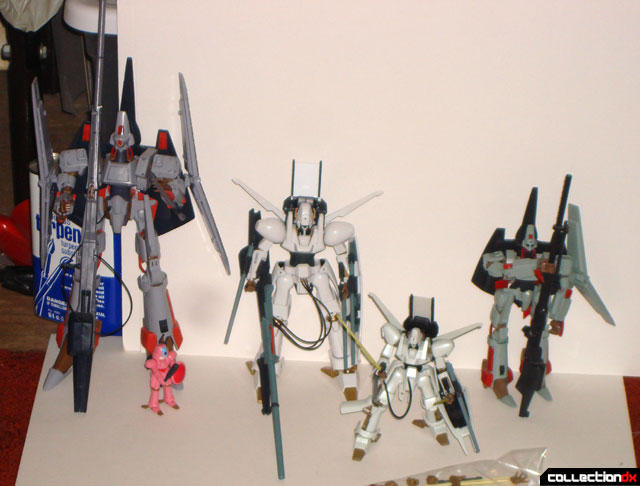 6 comments posted
this was a really good

this was a really good review. not too much not too little just right. i dont really know anything about this mecha or anything about most of the SOC line.. i like the design but the white colour just seems a little to clean and sterile. though it does go well with the gold... meh its a robot and i'll no doubt end up with one, such is life.

Tell my tale to those who ask. Tell it truly - the ill deeds along with the good, and let me be judged accordingly. The rest... is silence.

I really don't see where the money this thing costs went in the production to warrant it. The SPEC line is supposed to be the cheaper line that focuses on the Real Robot designs. Up until this release, the average price of a SPEC was about $70, including the Layzner with an electronic base and two sets of armor.

Maybe they figured L-Gaim fans would pay it since there really isn't a comparable toy until you go back to the Hi-metal one from 25 years ago. I've always liked the L-Gaim design, but this one is going to wait for the inevitable clearance. Maybe if it had/did more I'd see the value, but after reading the review, I'm glad I went with the 1/60 Yamato VF-1S instead.

Definitely only for the L-Gaim fan that must have a "high end" toy, and it's still a better value than the Megahouse one from a few years ago.

Great review given that its your first!!.....and here i thought SOC L-gaim still hasent released yet...Hope we see more reviews!!

I am NOT an L-Gaim fan but I like some of the designs especially the samurai-like Black Grard (Black Guard????) resin model by Volks.

I will pass on this one as I'm waiting for the CM's Baldios normal colour to be issued soon.

I'm kind of starting to get into the L-Gaim show,but if I end up deciding to buy a figure of it the MSiA is probably good enough for me. Like the above poster,I don't see where the 90 dollars is in this.

Thanks for the comments. Yeah, even though I like it, it just doesn't seem to justify the higher price unless you really like the design like I do. The Dragonar SPEC's are worth getting though.

I plan to review the OSIA L-Gaim next.