My first exposure to modern Kamen Rider was at Anime Weekend Atlanta many years ago. I was at Daryl Surat’s Panel of Doom and he was showing clips from the cooking episode of Kamen Rider Kabuto amidst a whole whack of other incredibly stupid clips. I was already well aware of what Kabuto looked like through various internet pictures and what not, but at the very end of the clips I caught a small glimpse of another Kamen Rider with two large horns and two blades for weapons. I immediately found myself curious and eager to know more about who that character was, and even though it took a few years for me to get around to watching Kamen Rider Kabuto, my interest for the blue stag beetle Kamen Rider never vanished.

After watching more Kamen Rider Kabuto I found myself actively engaged by the character Kagami. He filled the spot of the rival character who is clearly not as strong or as tough as the main character, but who still tries just as hard to keep up with him. Kagami often got the short end of the stick early on in the series, as he was the first character to try and call out for a Zecter, but it went to Tendou instead. He was also the given the Bee Zecter before that was taken away from him as well. Kagami went through a lot of crap, so when I saw that first time he called for the Gatack Zecter while fighting against the Spider Worm and he henshined for the first time, my mind was set that Kamen Rider Gatack was my favorite Rider from Kabuto.

Of course with my interest in Kamen Rider Gatack, I wanted to get an awesome toy of him as well. At the time I had two options: the Souchaku Henshin with its ridiculous bean head, or the S.H. Figuarts. I naturally went with the S.H. Figuarts of Gatack, although it did take a little bit of time to track one down.

The S.H. Figuarts Kamen Rider Gatack figure is a well detailed and sculpted figure that looks fantastic. The metallic blue paint on Gatack has several flakes in the paint that really make the figure shine under proper light. The proportions are a little bit skinny compared to newer S.H. Figuarts bodies, but I think that the lanky look works with the aesthetic of the various Kabuto Riders. 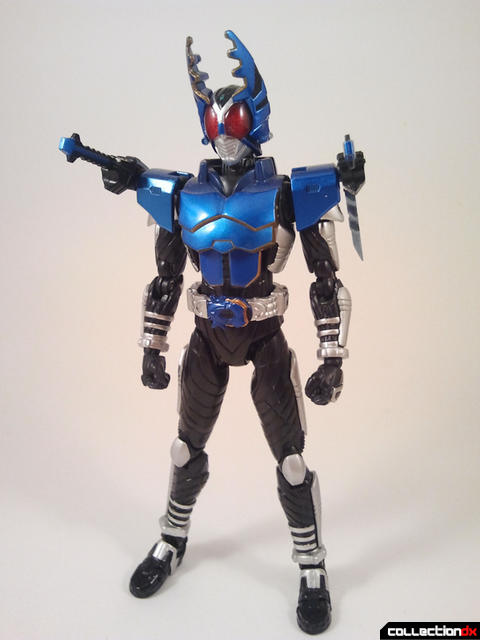 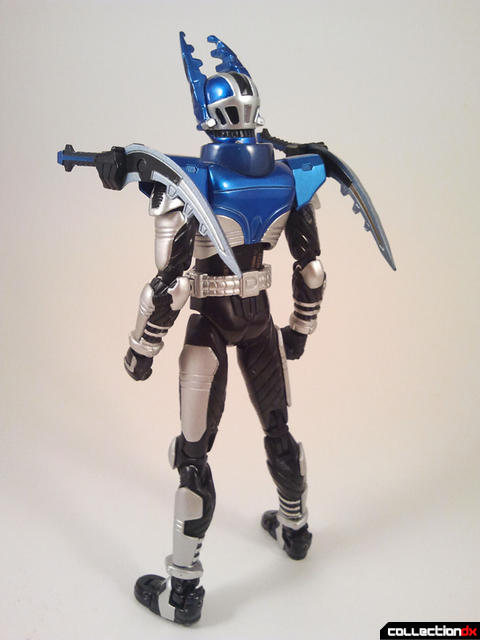 One of the unique things about the Kabuto Riders is the fact that they all have slightly different patterns for their compound eyes, and Gatack is no exception. His rectangular eyes and bright red lenses give a strong constrast against Gatack's design. 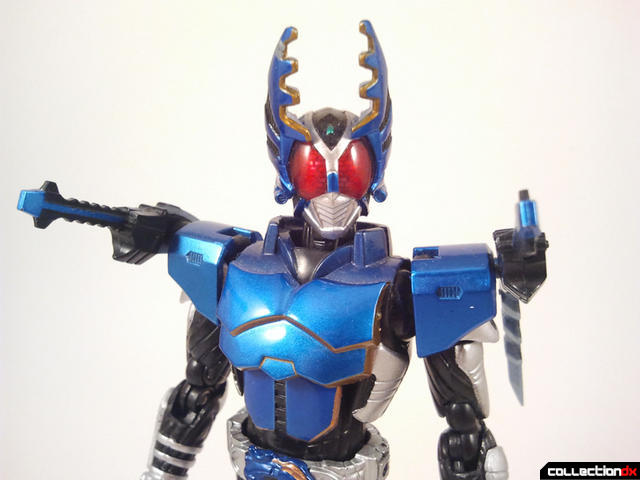 Even Kagami's Gatack Zecter is sculpted well. A few paint applications and sculpted details are missing, but it's so small that I think it's understandable why they are not present. 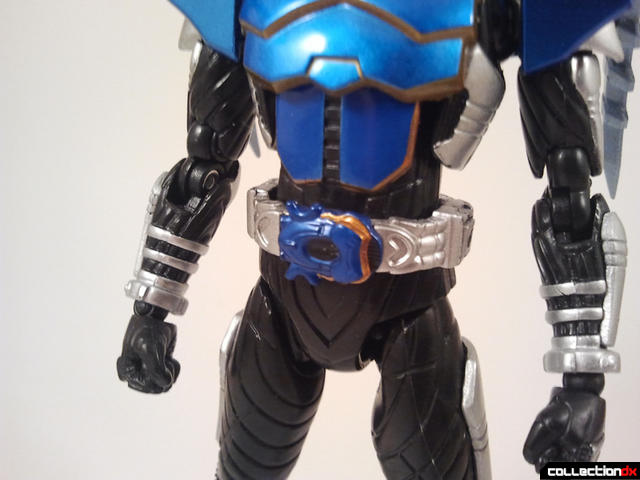 Kamen Rider Gatack uses one of the earlier S.H. Figuarts bodies, and is also coincidentally my favorite Figuarts bodies. The skinnier proportions leave the articulation unhindered in all areas. There’s also a load of diecast in this body as well (Well, compared to most new S.H. Figuarts). All of the pads on the arms and legs are metal. The feet are the usual insane quadruple-jointed feet, but on this body they are even ball-jointed as well. 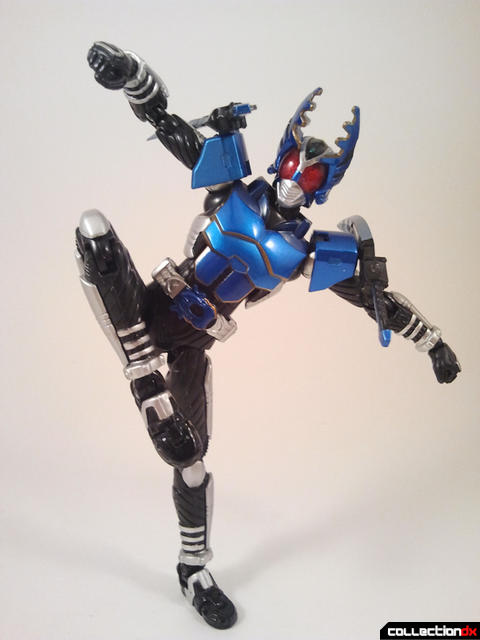 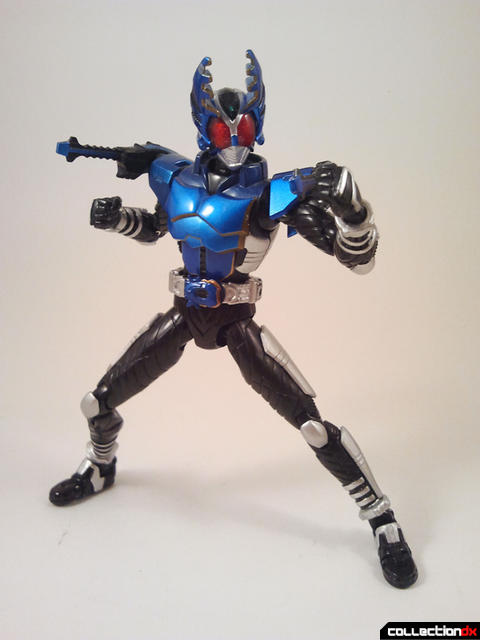 Kamen Rider Gatack comes with all of the accessories that he needs. He has two pairs of alternate hands: splayed hands and holding hands. In addition to the alternate hands, he also comes with his Double Caliburs. The two blades are usually pegged into Gatack’s shoulders and are removable. You can even make Gatack hold the blades in place as if he were reaching for them. 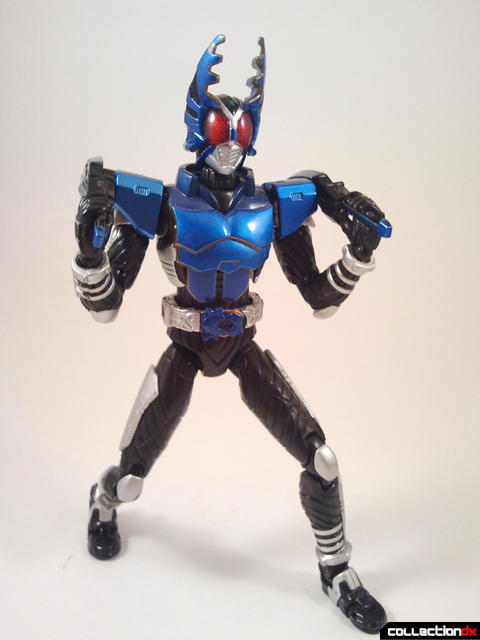 Once removed the blades work well as Gatack’s primary weapons. They are great for mid-slash poses, or even just having Gatack hold them menacingly in a battle stance. 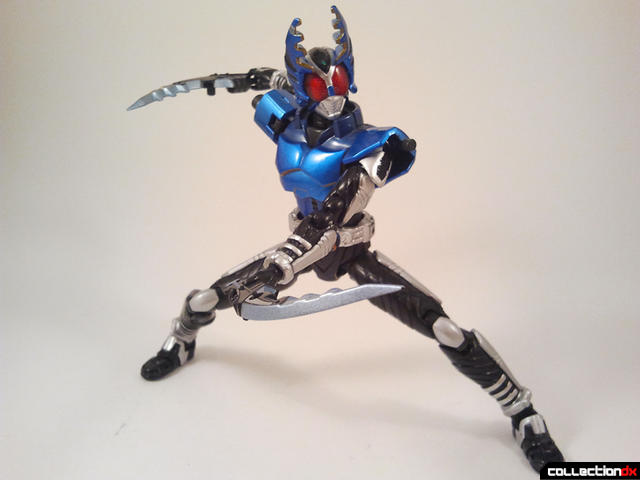 The Double Caliburs can even be combined like in the show. The two blades just peg right into each other and combine so that Kagami can perform one of his final attacks: RIDER CUTTING! 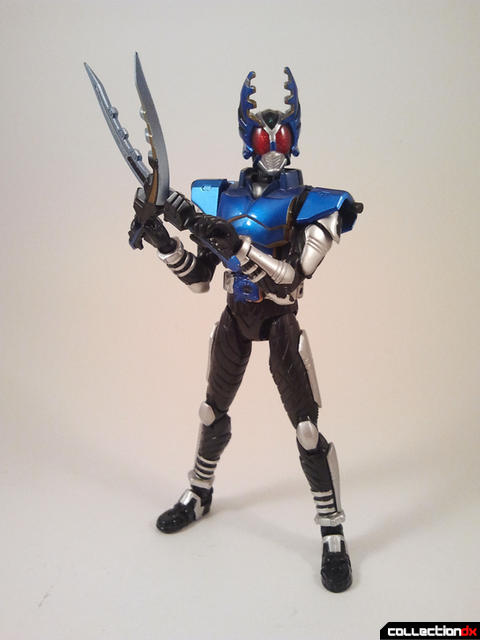 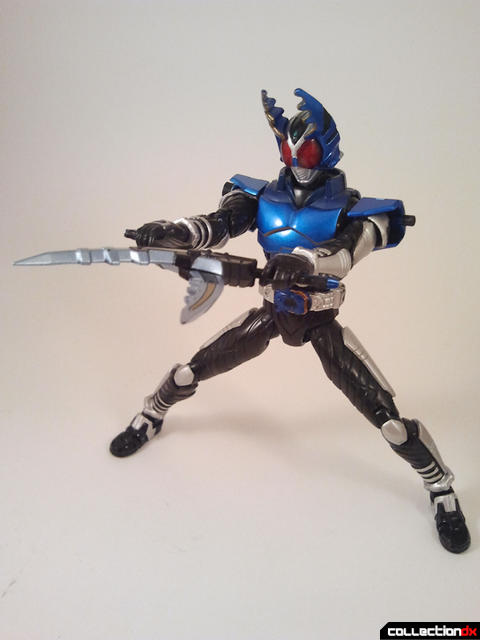 I’ve had this S.H. Figuarts for quite a while. I took so long writing a review for Kamen Rider Gatack because I wanted to do the toy justice. This is absolutely my favorite S.H. Figuarts for several reasons: the sculpt and paint is fantastic, the articulation is great, and the representation of the character is spot on as well. With a lot of other S.H. Figuarts I make the comment “I wish this came with ____”, but with Gatack I can’t say he’s missing or needing anything else. He’s a complete package Figuart, which a lot of other S.H. Figuarts often tend to miss, or at least did at the time of Gatack’s initial release.

At the end of the day, Kamen Rider Gatack is a perfect example of what the S.H. Figuarts line is capable of: exquisitely detailed sculpts with amazing paint, and plenty of accessories for all the various display options you would want for the characters. Gatack is one of the best figures to accomplish these traits and absolutely worth tracking down as one of the earlier S.H. Figuarts releases. 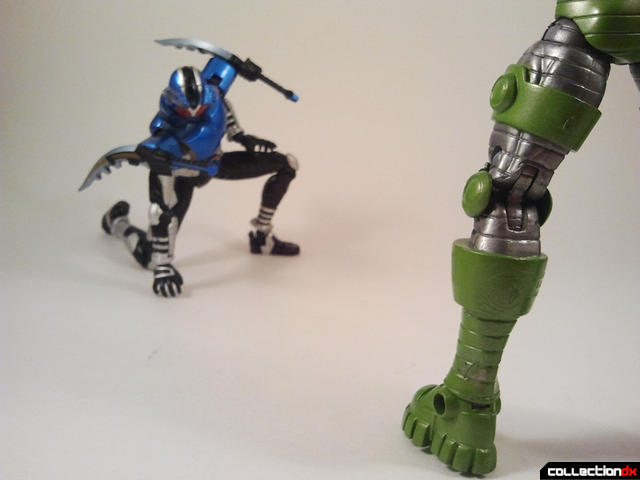 “…Hrmph! Foolish Japanese-beetle-man. Your strength is nothing compared to the combined might of Titanium Man and Mother Russia! Let this be a lesson to all of you silly Kamen Riders: None can oppose Boris Bulski!” 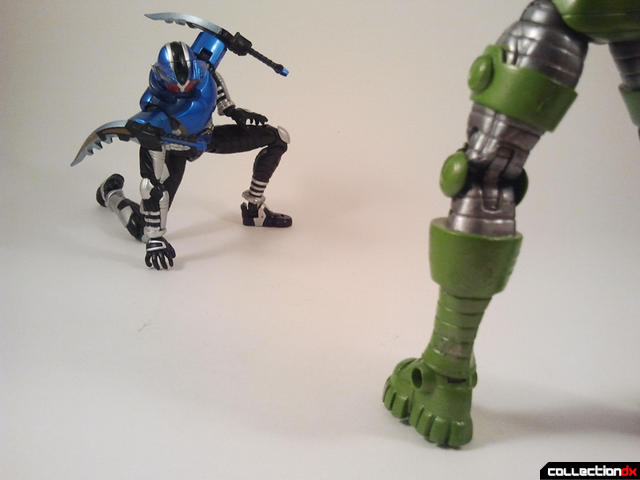 “…That may be true. I may be weaker than you, and I may not be able to defeat you. However…” 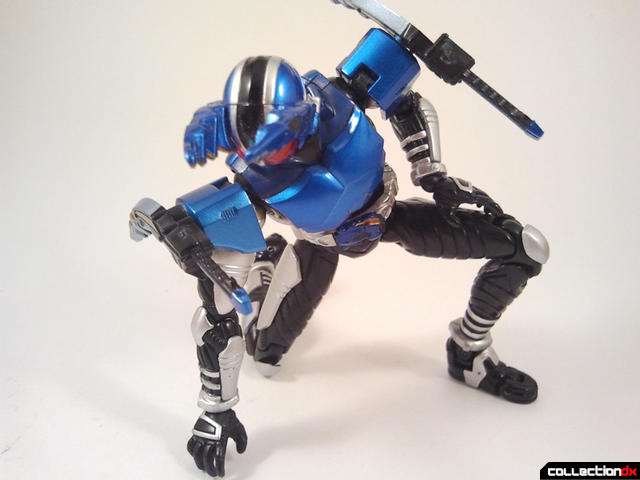 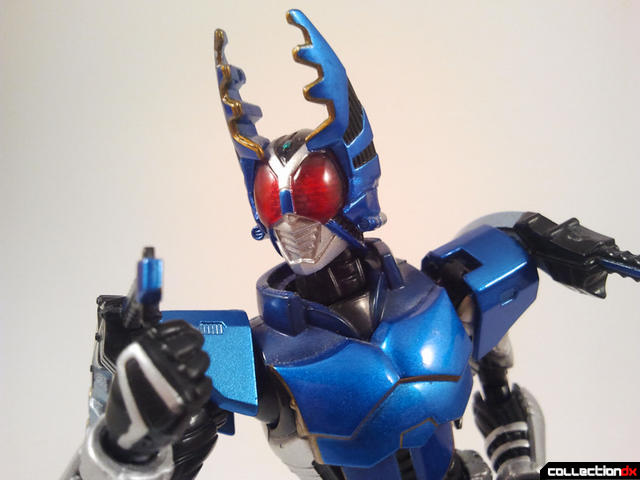 “… I won’t be defeated until I surpass the man who walks the Path of Heaven!” 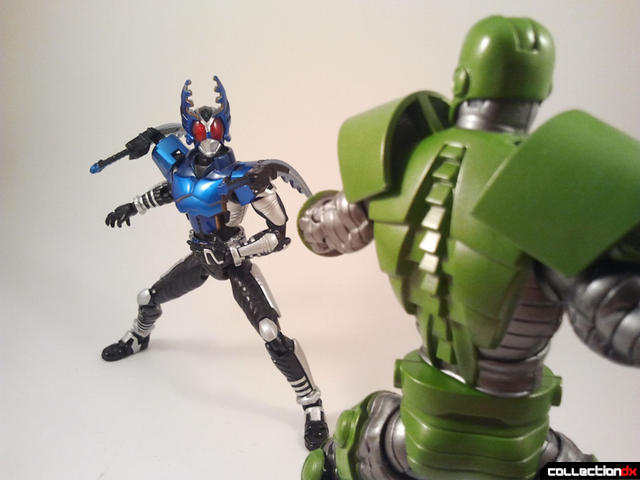 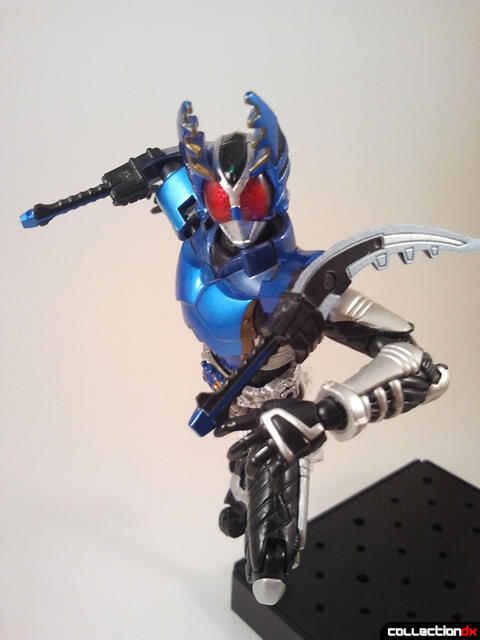 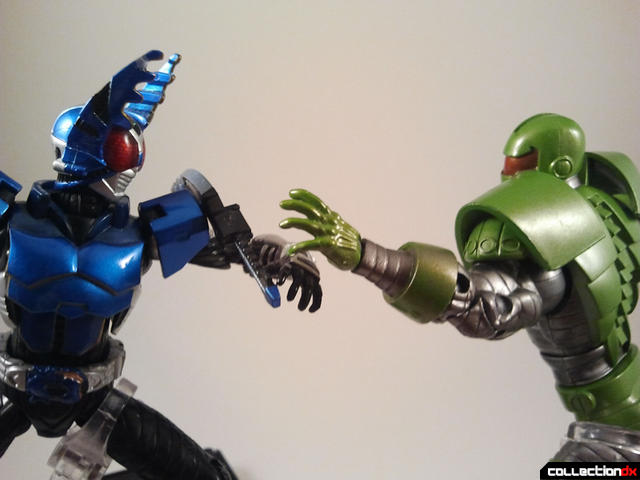 “Even still you stand, puny beetle?! Let me beat you down again so you are reminded of your pla-” 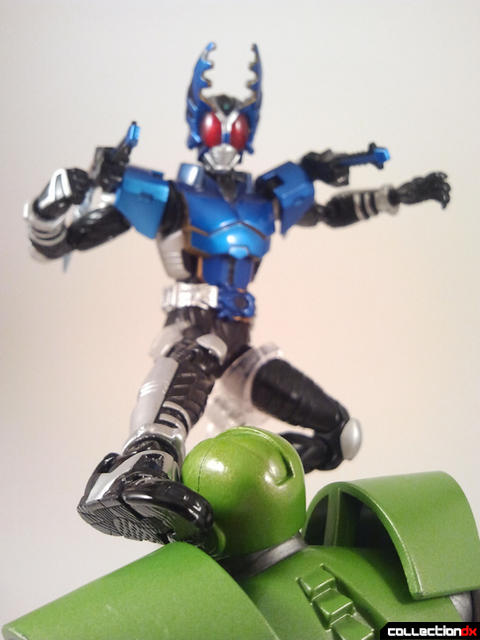 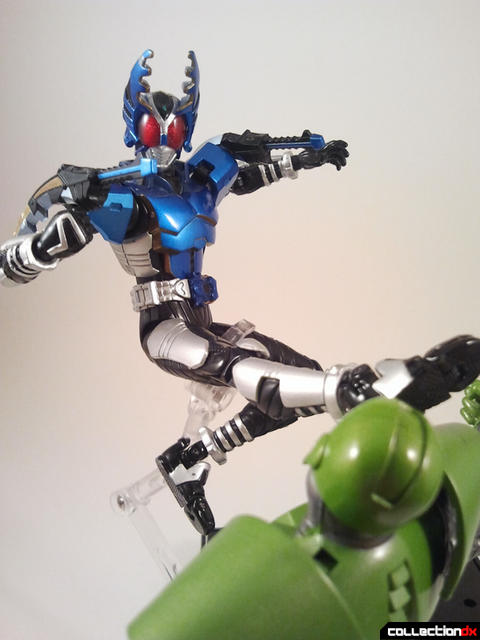 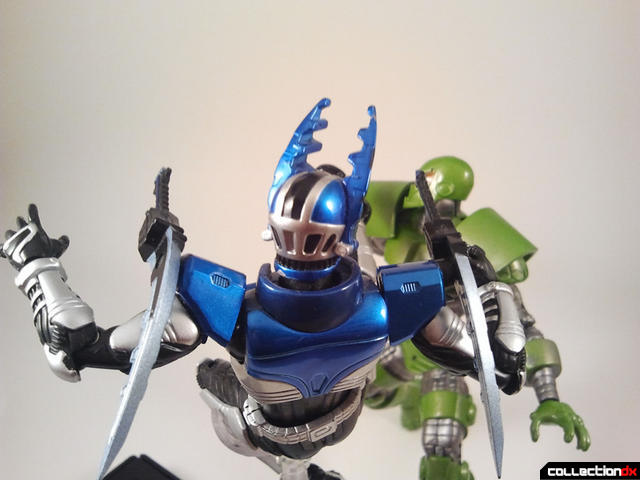 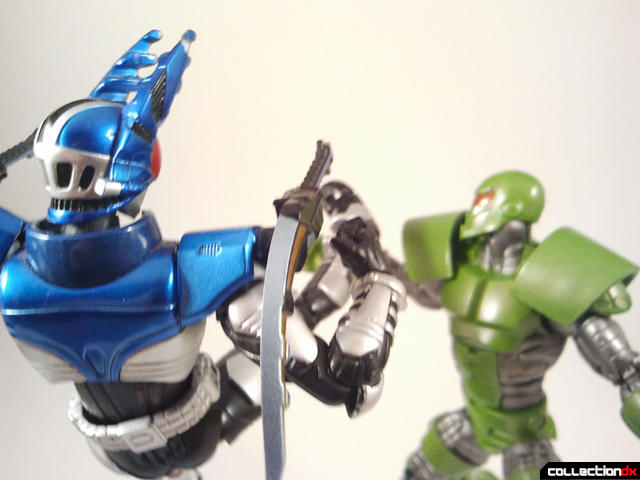 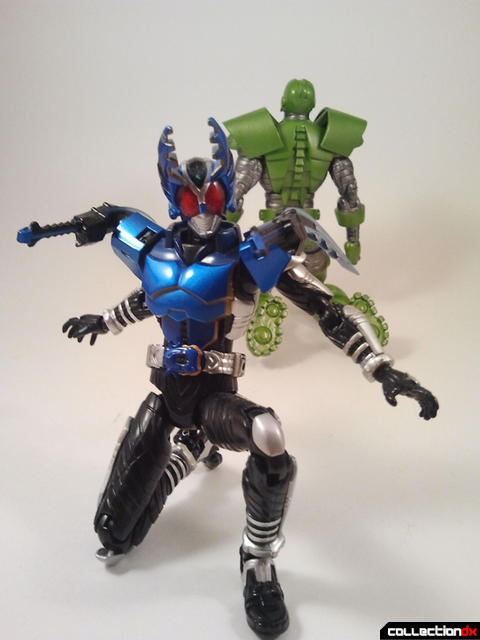 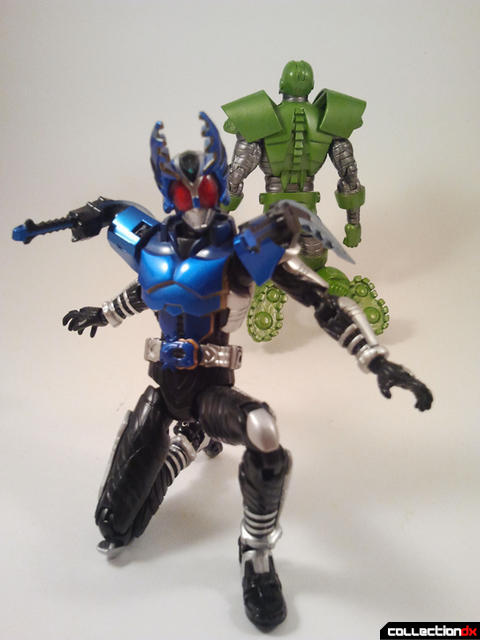 “… Titanium Man may have fallen, but Mother Russia… Will live on… To destroy you-urgh!” 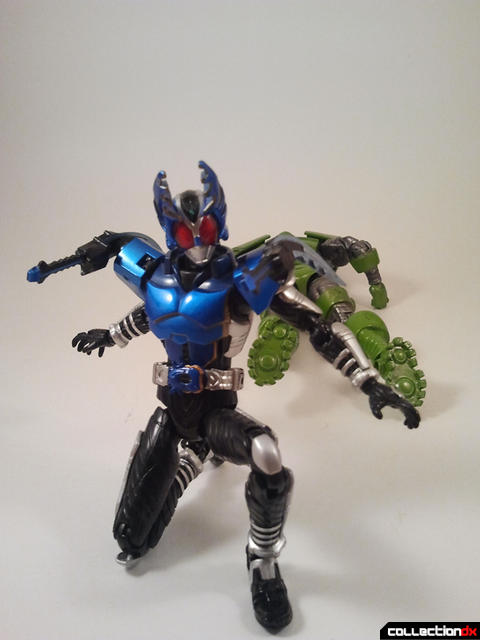 "Even if you, Mother Russia, or even the man who walks the Path of Heaven get in my way, I will not be defeated by anyone who gets in the way of my path: the Path of Justice!"

10 comments posted
This is going to be a thing

This is going to be a thing now, isn't it.

Don't look at me, I'm innocent.

I like the Figuarts line, but after collecting a dozen or so of them, I realized they just don't satisfy me as much as I'd like for the price. I keep meaning to sell most of them off.

The exceptions? Gatack and Ixa. By Primus, I love those suits, these toys, and can't bear to part with them yet.

I'll be snapping up most of the Kiwamii Tamashii line to satisfy my Rider-Lust. Maybe I'll get lucky and those two will come out there as well.

I'm in the EXACT same position you're in! Newer S.H. Figuarts don't excite me quite as much as they used to about two years ago. The increase in price by near 50% combined with the removal of almost all die-cast has left me not as eagerly anticipating the new S.H. Figuarts that are coming out.

And I also completely agree on Kiwami Tamashiis as well. Now if only the line was more popular so we got more than one every 2-3 months, right? Man it's a pain waiting for new figures to come out of that line!

For the, what $10-$15 a pop, even after shipping, the SIC KT's ALWAYS satisfy. I do wish we got one every month or something, but my guess is they're meant to help shore up SIC sales between major releases.

And have you seen the SIC OOO's? Dear GOD that thing looks awesome. I SO want a KT of it RIGHT NOW... >_<

SIC OOO is pretty fantastic. I love how he looks with his claws fully deployed. It looks like he will maul you like a freaking bear.

I eagerly anticipate the other forms. I'm certain they will not disappoint.

I have been collecting action figures since 1976. SH Figurarts seem to be the best going today. The paint detail, the accesories, and the posability seem top notch to me.I have yet to be disappointed with a SHFiguarts figure. The price point also makes the figures a plus. I will buy a Figurart over a Revolvtech any day! This looks like another good release.

I like the action shots. Great review! I hope this style does become "a thing". I like to see great creative reviews like this. Thanks again.