Sometimes I am an idiot.

I bought this figure because I thought he was a character from the Marvel Comics Star Wars books - Fenn Shysa. I grew up on those Marvel comics, and until The new books came out in the 90s they were my expanded universe. 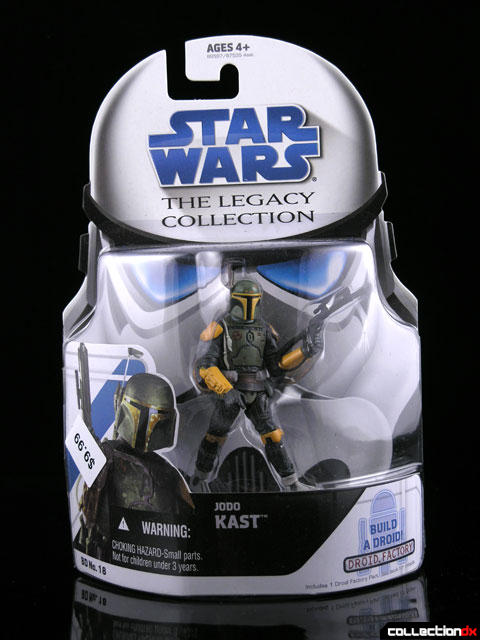 According to Wookiepedia, Jodo Kast was a Boba Fett imposter, who is eventually killed by Fett himself. 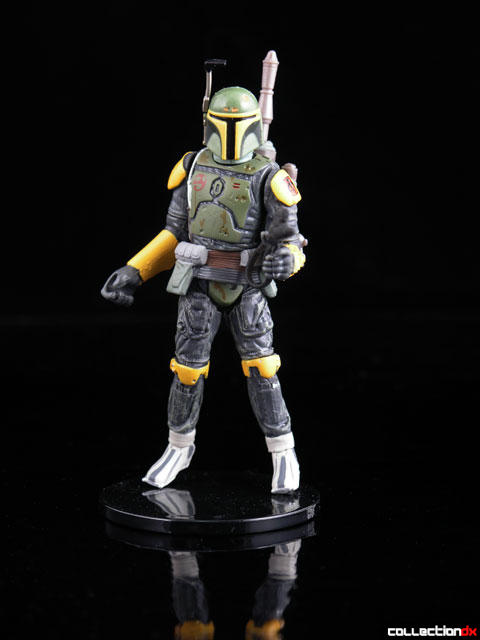 The figure pretty much sucks, and I surprise myself by even writing this much about it. 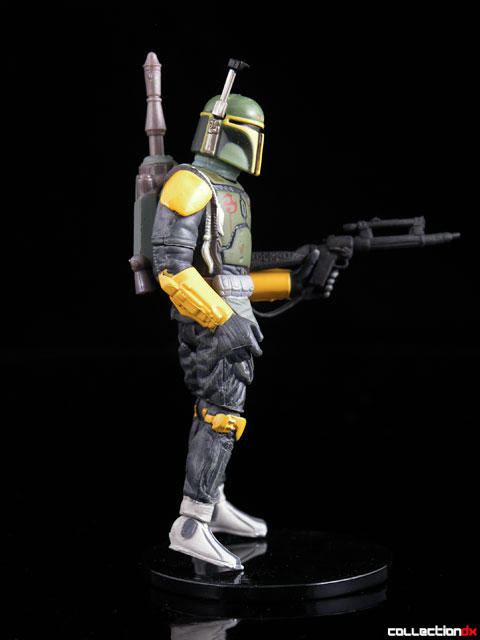 The figure is a repaint of a 2006 Boba Fett action figure with a quick draw action. Notice the arm permanently bent. (although there is a swivel above it). The rest of the figure features mediocre articulation, with ball joints at the knees and ankles. 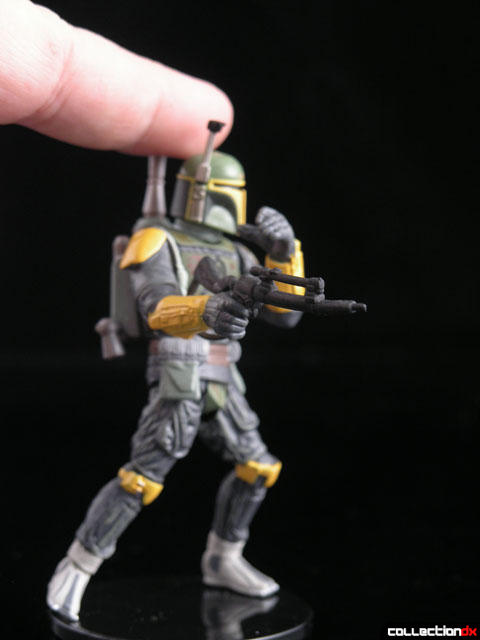 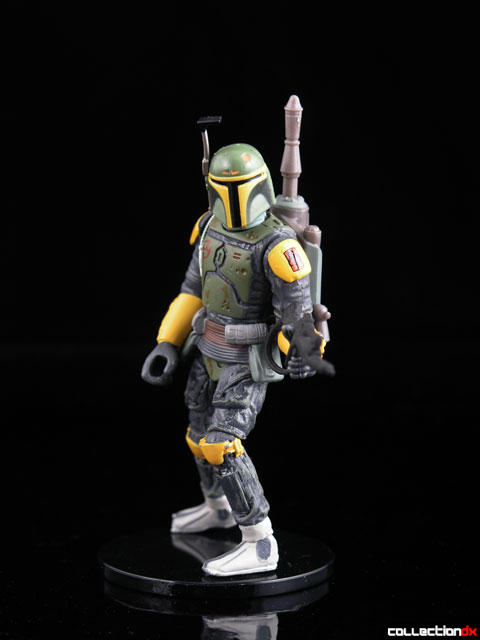 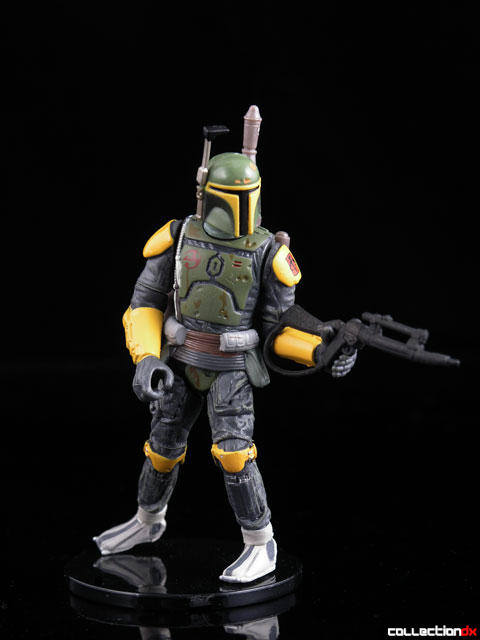 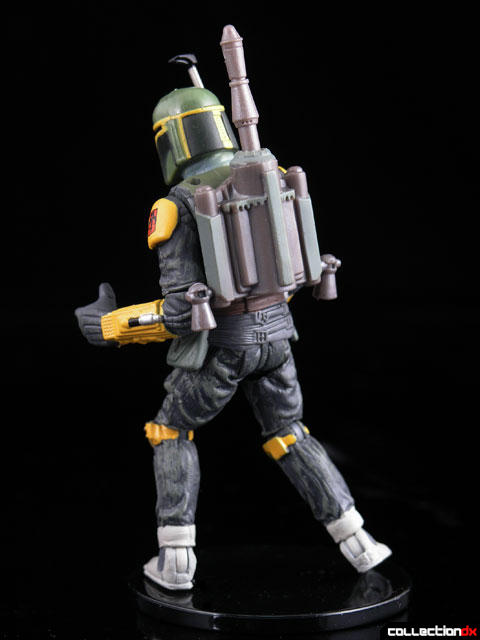 A mediocre, forgettable figure. He does however come with a build-a-droid part, so if you need to complete a 5D6-RA7 droid, you need to buy him. (or you could email me, I have no plans to build this droid). 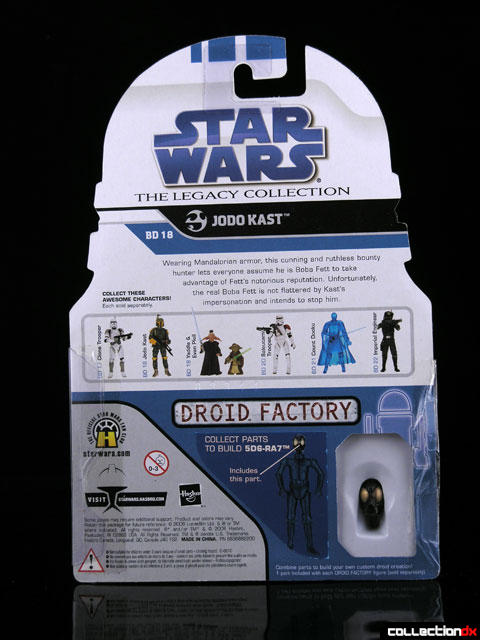 6 comments posted
This figure does suck... and

This figure does suck... and there's no reason for it except idiocy. Hasbro has tons of much better Fett designs to use.

The Fenn Shysa figure actually comes as a 2-pack, the 2008 Legacy Collection FENN SHYSA & DENGAR comic 2-pack, including the comic he appears in. Also available in a similar 2-pack, is Shysa's doomed friend, Tobbi Dala, in the 2008 PRINCESS LEIA & TOBBI DALA 2-Pack. These can still be found at retail sometimes in 2009.

The figures are both pretty cool. Super-articulated, removable helmets, etc. The Leia and Dengar figures blow. But I didn't feel bad paying $16 for each set, especially if you have a Marvel Star Wars fetish like I do. Shysa and Dala are really nice toys, and worth getting, and just throw the leia and dengar to the dog or in the garbage.

Star Wars toys for the last few years (2004-current) have been pretty good. I've been buying a bunch for cheeeeepy cheep on ebay lately, as "quick toy fix" fun. When a bag of toys you paid $10 for is just as much fun as a $100 modern gokin, you can't argue with that value.

I think for the average fan (like me!) it's just too daunting to wade through OCDStar Wars sites just to find what you really want... the best darth vader, best leia, etc. I've been putting together a post for the forum detailing the best ones available... so you don't have to waste your life just trying to figure out which Luke figure is the best.

I got that two pack, and will be reviewing it as well at some point.

My life would be totally complete if they did nothing but Marvel Star Wars comic figures.

A post for the forum? Is there a CDX forum I don't know about?

sorry for being vague. I'm in the middle of putting together a brief best-of post and history for Robotjapan.com's forum (and a few others as well) called "Star Wars DX: A Guide to the Best Figures for Casual Fans."

There's so many SW websites but they are really confusing for the most part, or overly detailed. Many collectors like SW but are daunted by the sheer amount of figures released, and just want the "DX" or "the best" version available. Many of these figures are worth your time, and since 2004, are on a par with some of the best toy lines ever released.

I got inspired by a post at sirstevesguide.com called "Star Wars Collecting: A Character by Character Study" - an excellent resource but for the casual fan useless (it's a little too detailed and "the best" figures are obtained by average scores by hardcore forum posters, making some of them not neccessarily The Choice for casual fans who just want one luke, or one leia, etc.)

I'm taking all the photos myself, except for a few in-the-box shots and shots of the vintage Takara stuff. Still waiting on a few pieces here and there, so it won't be done until September.

It was a Dark Horse Star Wars comic where Jodo (What an awful name) is stealing business from Fett, so Fett and Dengar set up an elaborate and needlessly complicated con to lure Jodo out. Then they ripped off the end of Mad Max. Fett gives Jodo a "chance" at survival, leaving him next to a a gas tank that's slowly leaking towards a flame. Than Jodo explodes and Dengar sets Fett up for an awful one-liner that goes something like:

Dengar: You must be getting soft in your old age, giving him a chance to live!
Fett: There was no chance. Because he wasn't me.