Just who is this Haruhi Suzumiya anyway? Why does she grab onto the hearts of Otaku across the globe. Is she simply a Moe idol, or is there much more to her? 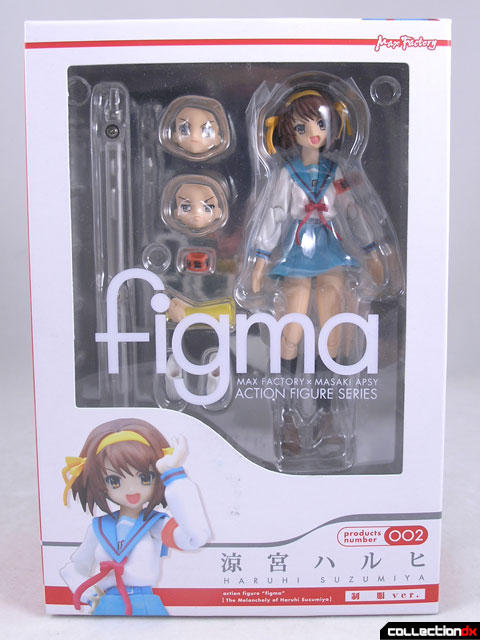 At first glance, Haruhi Suzumiya seems scientifically orchestrated to pull at the desires of the lonely otaku. The schoolgirl outfit, the bows in the hair, the doe-eyed stare. I supposed it would be easy to dismiss here as just another pubescent obsession. Suprisingly enough, there is more to Haruhi than you might expect.

According to Wikipedia, Haruhi Suzumiya is nearly a god. She has the ability to alter reality, but doesn’t know it. She may be one of the most powerful characters that ever existed, but unless you know the show, she is dismissed as just another anime schoolgirl.

Regardless, you can’t deny the popularity of the character or the show she hails from – The Melancholy of Haruhi Suzumiya. The dance during the show’s end credits has become an otaku phenomenon, and it shows no sign of stopping. 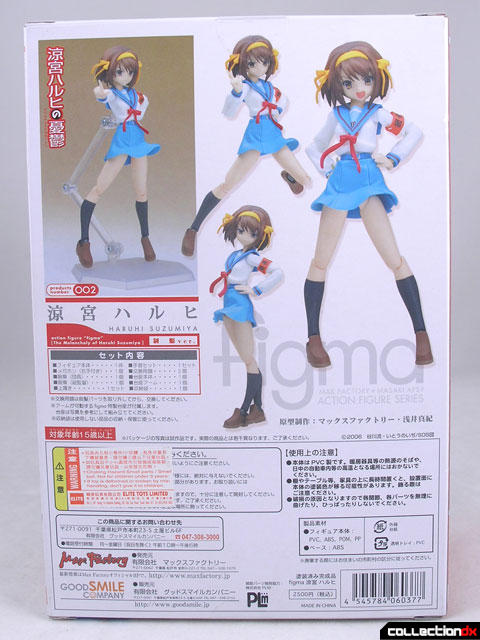 It seems only natural then that the one of the first releases in Max Factory’s FIGMA line would be of Haruhi. What better way to launch a new line of figures than to start out with one of the hottest characters out there. 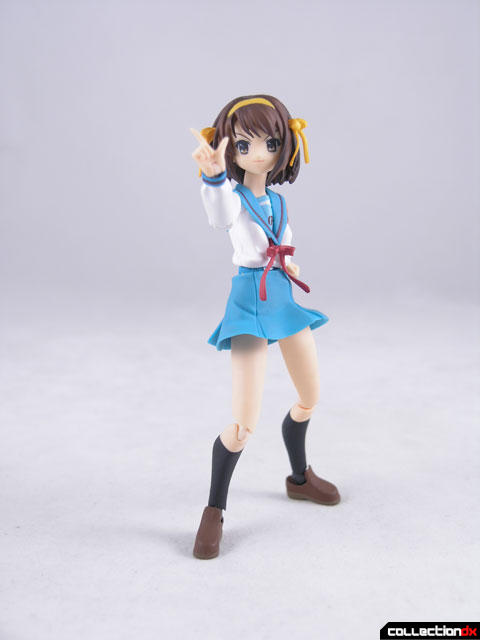 As I mentioned in the Figma Saber review, the Figma line is a direct competitor to the Revoltech Fraulein line. But Max Factory does it better. They just seem to have a better grasp of how to make an articulated female figure. 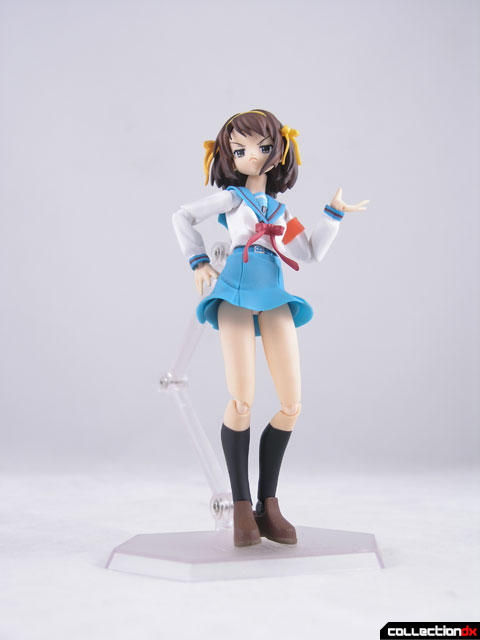 The Figma Haruhi Suzumiya is a great toy, even if you are not familiar with the anime. It’s solid construction, fantastic articulation, and great details. 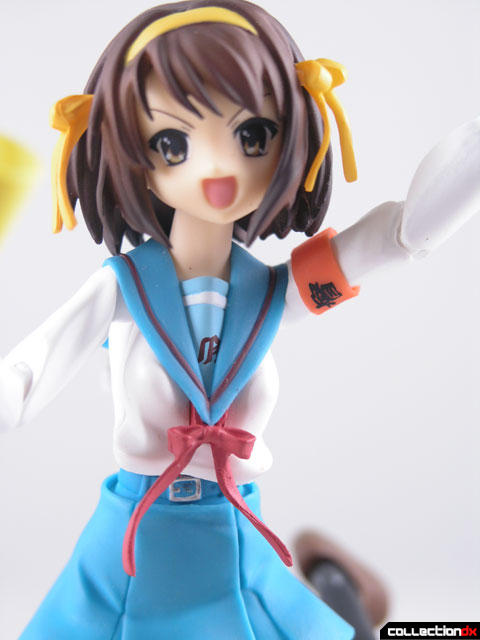 Haruhi comes with three different facial expressions and several interchangeable hands. The hands can all be attached to an included holder, a nice touch. Each hand has a wrist joint for added articulation. 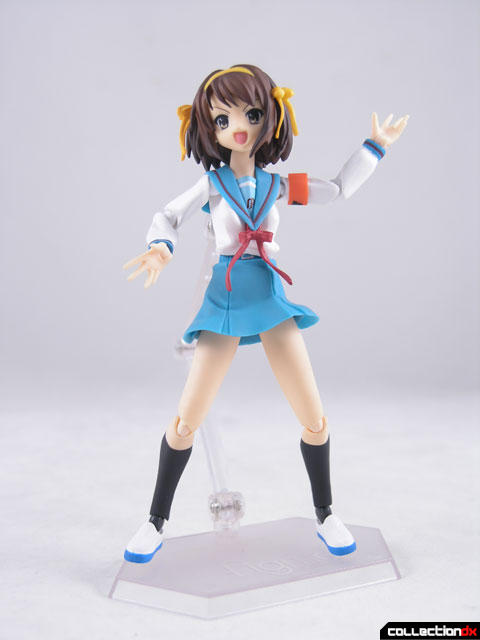 Other accessories include two different armbands one of which is a Chou Kantoku (Super Director) band (whatever that means). There is also a yellow megaphone looking thing that she tends to point at people. 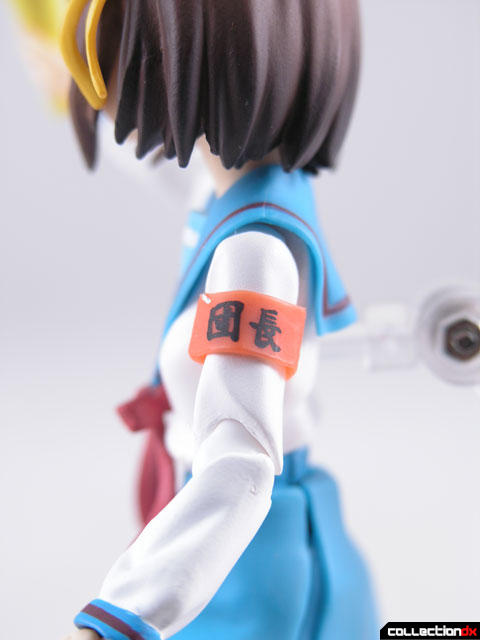 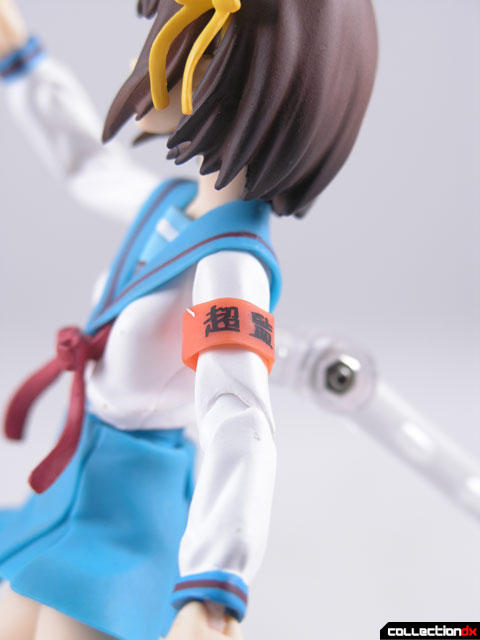 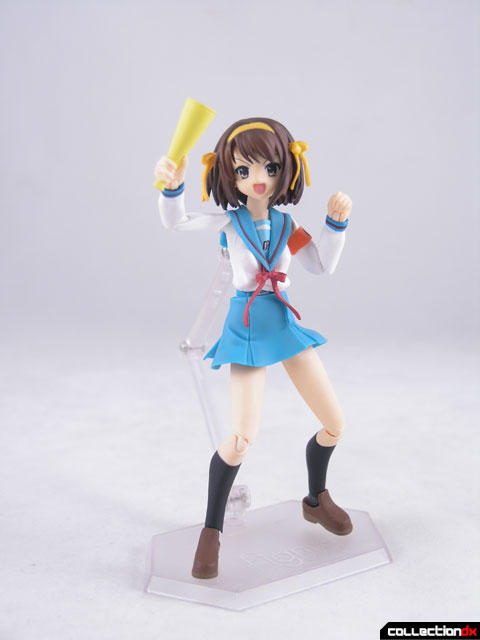 The display base is really nice, featuring clear construction and an articulated support arm that attaches to the back of the figure. 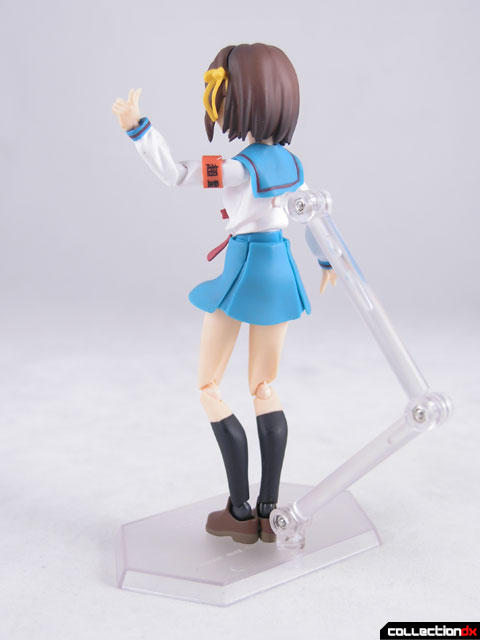 Also included is a cool plastic bag with the Figma logo on it to store all of your parts. What a great idea.

So it appears Figma is taking off big time, and now is a great time to get in on the ground floor. 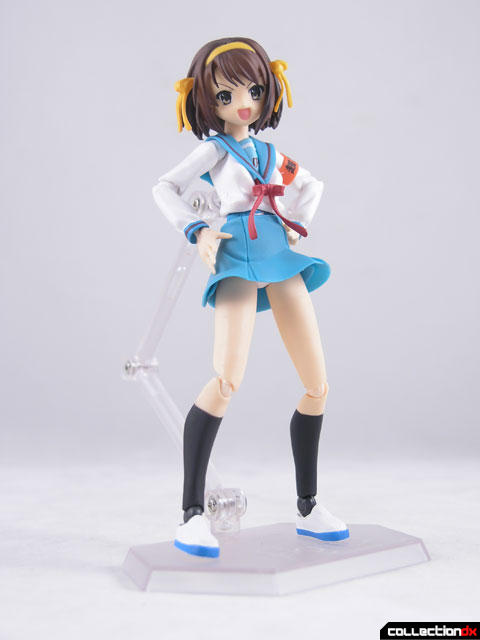 20 comments posted
Hey! You're not supposed to

Hey! You're not supposed to have FUN with your toys! I want the figma Saber more than any others because if there's no amount of rage/violence/swords/giant robots, I have a hard time getting interested.

What Red King is that..? I guess that was funny, but even more than that, something about the phrase "despite the moe" cracked me up.

First I would like to say "So long" to my credibility as a Gunpla/Mecha modeler.
I haven't seen the show myself but I've seen the ending sequence where she and her classmates dance around. I'll give it credit, the animation is smooth and their movement is a lot more dynamic than you'd expect.
Besides if you search around enough you'll see it done at conventions as a big group event, Found a vid once where someone was in the dance while dressed as a cardboard Optimus Prime.

Aw, crap-! I watched each of those YouTube vids above just to see what's goin' on (the Gundam ver was hilarious!). And now that damned song is stuck in my head! I can see how that would become addictive so quickly.

I was just about to agree with you, and say that all these mini-sized poseable female figures are beginning to invade CDX.

...Then I remembered that I did this, and that CDX is, well, about collecting stuff from Japan and the US. So, I suppose that this figure does belong here, but in spirit, I think that it and others like it are usually misplaced among the general theme of robots & such which dominate the site.
------------------------------
CollectionDX Staff

I did it in tribute to vince.

It's official. Now can we get back to robots and monsters, please? ;)

Sanjeev, was that an obscure reference to Alice and Wonderland? Either way, it was quite apt.

Red King is the noisy Ultraman kaiju at the end of Josh's video review of this figure! If you haven't watched it yet, be sure to check it out...it's definitely worth your time!

Max factory getting better isn't it? While some Company like CM getting worse by the day...

By the way, you said it's the first release and you wrote it's series one, but the box photo says it's number 2...

My bad, you are right. its the second.

This is turning out to be like one of those AA meetings where everybody stands up and announces they have an addiction. Only in this case its figures of school girl like characters with insanely disproportionate bodies and cleavage and weapon accessories. and all I have is a glass piramid of empty Jack Daniels' bottles!