For every yin there is a yang and for every Gundam there is a Zaku. In Megazone 23, for every Garland there is the Hagan. Sometimes romanized as "Hargun," the Hagan (????) is the first enemy mecha mobilized against the Garland during the first OVA. It is meant to be a predecessor to the Garland and does not feature perfect transformation. Instead, the Hagan's arms and legs must be attached via a special transport truck.

In 2008, Organic Hobby released a small line of figures under the "Maneuver Slave Collection" banner. While this is never outright stated in any of the OVAs, "Maneuver Slave" is the name of a mecha's humanoid form in Megazone 23. These figures were small and robust. Made from solid PVC with ABS joints, they were a little overpriced at 2000 yen a pop but had the inherent appeal of bringing many obscure designs to life in toy form for the first time. 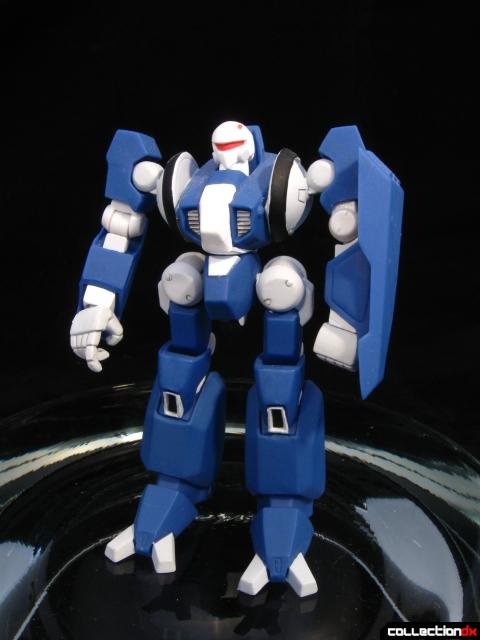 The Hagan is a little under five inches tall. Its PVC body has some decent heft to it and no part feels rubbery or appears misshapen. All the colors are vibrant, which gives the figure an animated appearance. The arm shield is permanently attached. 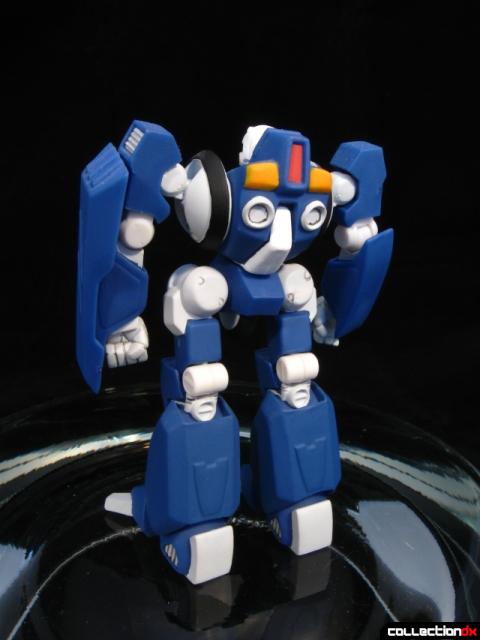 Front to back, the Hagan has all the right details. 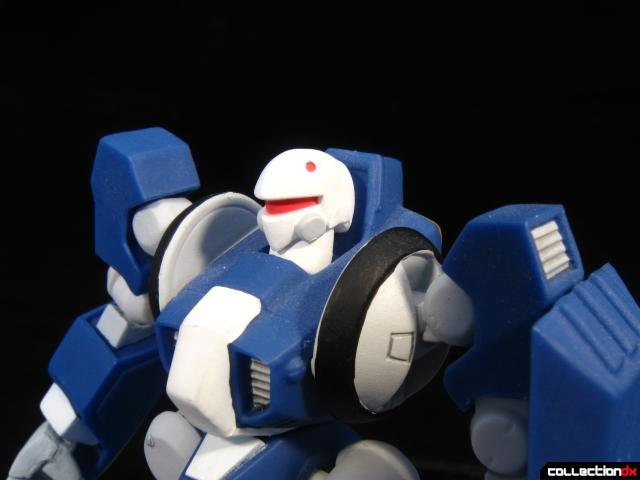 Despite the softness of the sculpt, the Hagan figure still manages to include some crisper details like the shoulder vents and panels. These are highlighted by some light inking. 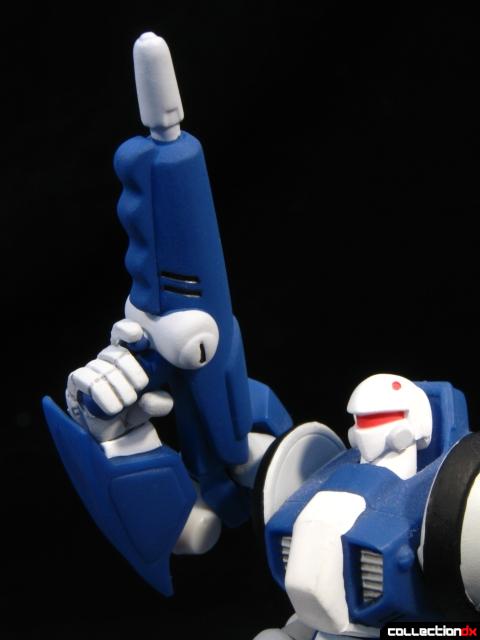 The Hagan comes with one accessory and is its gun. Unfortunately this is where the softness of the sculpt works against the figure. Really, the gun looks more like it shoots cake frosting than lasers orbs. 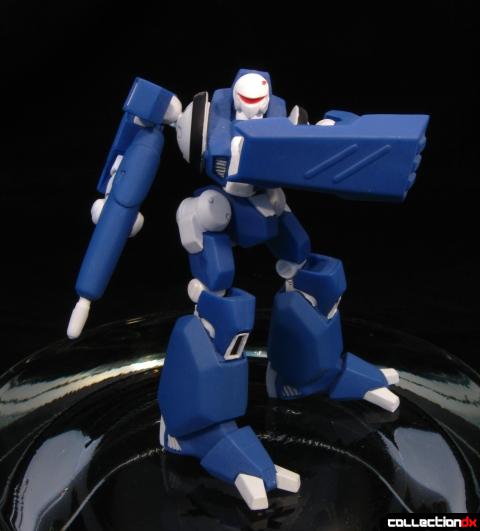 Despite its appearance, the Hagan is quite a poseable little figure. It has all the major joints in its waist, hips, knees, ankles, elbows, and wrists. The only major omission is the lack of a neck joint. Also, the elbow can be difficult to rotate because the extra overhang from the shoulder itself can block the joint. 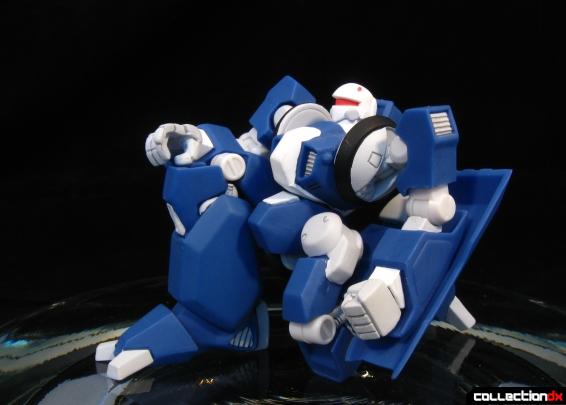 Kneeling is no problem for the Hagan.

For a collector looking for something, anything with regards to the Hagan that's not an expensive Garage Kit I think this might be right up your alley. Many retailers have started to blow these out at less than their MSRP. Keep an eye out and you'll find a playable toy of an obscure robot.

Why didn't Yamato make a large toy of this guy to go with the other ones? I know it's a partsformer but still it could have been done even though it's a badguy robot (which rarely sells in Japan unless it's of a popular design).

Maybe they didn't make a large toy of it because it's a partsformer, and it's a bad-guy robot.

I picked up the MSC Proto Garland, and I can't say it's the best figure. The gun hold is very solid, at the cost of a permanent trigger finger, the swivelling biceps fall out easily when moved, and there's no ankle joint. That being said, for 500 yen, it was a very nice deal, and it looks and feels great.

Wait, I thought the Organic Hobby Proto Garland had a removable weapon, just like the Harguns.
Also, they all have ankle joints - they're just limited by the sculpt. If you pull the post the ball joint is mounted on part of the way out of its hole, you might get some more mobility out of it (or you might break the post, if you're not careful).
Also also, the Atelier Sai Proto Garland is a lot sexier.

The weapon is removable, but he's still got his hand permanently stuck in a trigger finger shape, unless he's gesturing to something.
Also, the ankle joints are there (one of his feet likes falling off) but the armour... flares (?) prevent sideways movement.

Oh, isn't it supposed to be Hargun, not Hagan? Maybe the name was translated wrong for the American DVD release of MZ23.

Re-read *literally* the second sentence of the review ;)

Ah derp! You're right. I thought the first line was one :P

oh my god i want to hug it oh god

I appreciate the intricate details & articulation that was craftly put into this obscure mecha. The Hargan is an impressive size of a toy for a collector's price. So impressive it's a sin.

As much as I would like to have a toy like that as one of my latest installments to my robot collection, I'm afraid I'll have to pass this one off my list.

Nice review as ususal, but I'll just save my Otaku budget for Yamato's Hargun if they ever come around it.