GoShogun hails from the anime "Sengoku Majin GoShogun" (戦国魔神ゴーショーグン,) which aired in 1982. Recently, there seems to have been a surge in toys of the character, starting with the superlative Brave Gokin from CMs Corp to the GNU-Dou from Yamato, and now this giant sized vinyl from Miracle Production, a subsidiary of whom is Most Wanted Toys, known mostly for their Gaiking toys. Initially this was reported to be a Most Wanted toy. Instead, it's Miracle Production, but the two companies are related. This toy comes courtesy of the good folks at Toy Freakz, the official US wholesale distributor of Miracle Production/Most Wanted Toys, and is available at toyrocket.com. 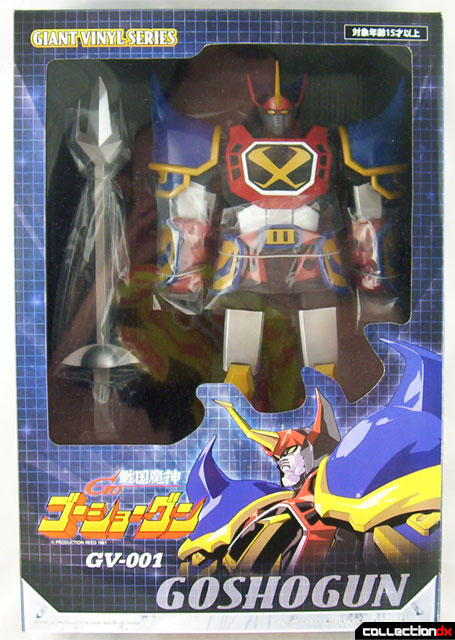 As you can see, the figure comes packaged inside large box with a clear plastic window in the front so you can see the toy inside. Notice anything great about this box? 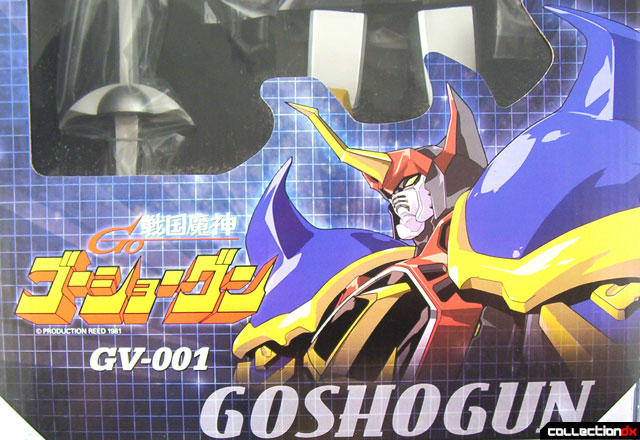 Man, that sure is a sight for sore eyes! Far too often in recent years toy companies have taken the easy way out and just shown a picture of the toy on the box. So even though the packaging looks very modern, it's still a great vintage touch to see some nice art on the box.

After you slide the interior of the box out, you'll need to undo some twisty ties to free the robot from the packaging, but not too many. There are slips of plastic wrapped around the figure where the ties go to prevent any marring from the plastic ties rubbing against the paint.

Now, once you get the toy out, and maybe before, you may be immediately disappointed by its size. Initial reports had this guy standing a full 18" tall, thereby making it a perfect companion to a lineup of Marmit FLOSRs. The unfortunate reality though is that GoShogun stands just a hair short of 15". That's still a big size for a vinyl robot, but expectations were set higher than that, so disappointment is inevitable. 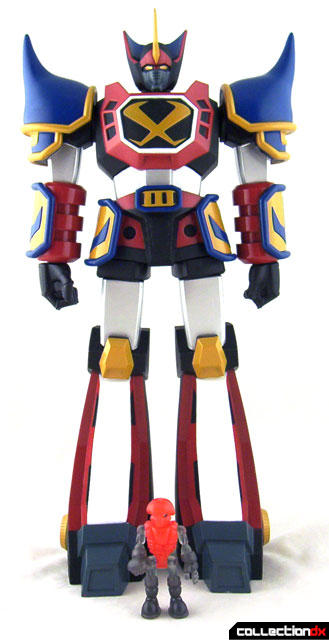 Honestly, even if it were a full 18", I'm not sure if it would really go well with a lineup of FLOSRs, which tend to look a bit more dynamic than this one does. The static pose on GoShogun here is more in keeping with the Jumbo Machinder aesthetic, although obviously it wouldn't fit in with that group either. So what do you display this with? Good question. Of course, with a number designation like GV-001, perhaps Miracle Production is planning to release over a hundred figures in this line and GoShogun will have compadres soon enough! ;) 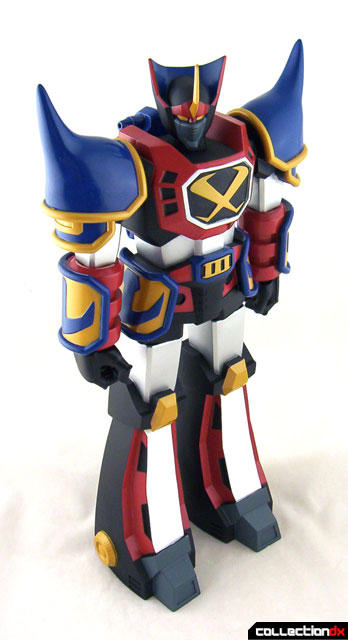 Visually, the toy is outstanding. They really did a great job with the sculpt here. GoShogun has 9 points of articulation. The head turns side to side and the arms raise and lower. The hips can be turned just above the silver and the arms can rotate at the elbows. And of course the hands turn at the wrists. 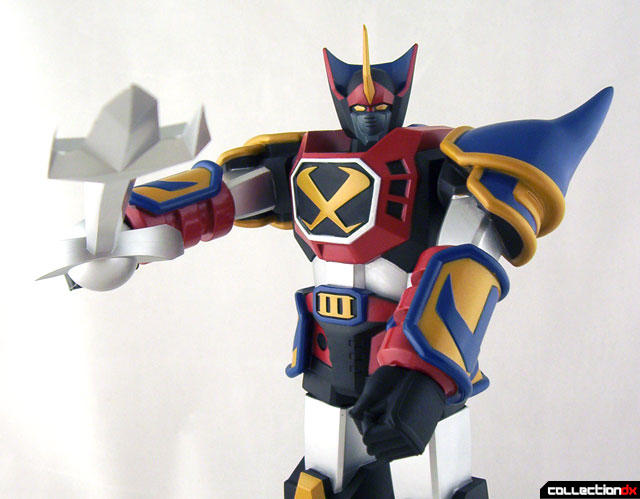 Unfortunately, the toy does have some minor QC issues. There is a paint smudge on the right shoulder and some minor overspray near the shoulder pad of the left arm. There is even some glue on the left hand.

These things don't bother me too much personally, but I know some collectors are real particular about that sort of thing. To me, that's nitpicking. Worse for me than those little hiccups is that the left shoulder on mine does not rest flush against the torso, making the arm a bit loose and wiggly. It still poses well but there is an obvious difference between the right and left shoulder connection. Note the gape in the left shoulder joint. 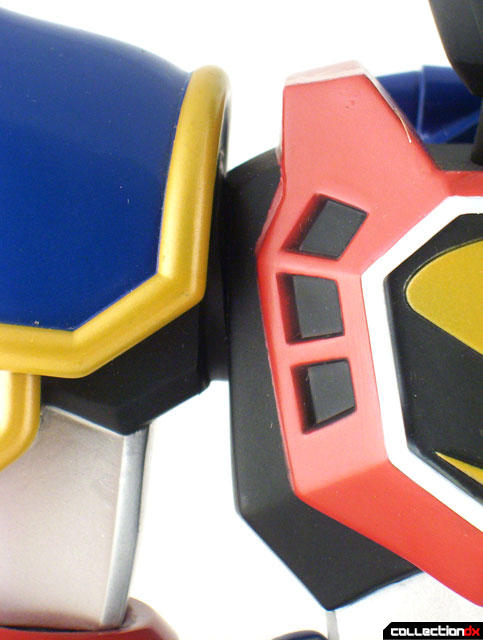 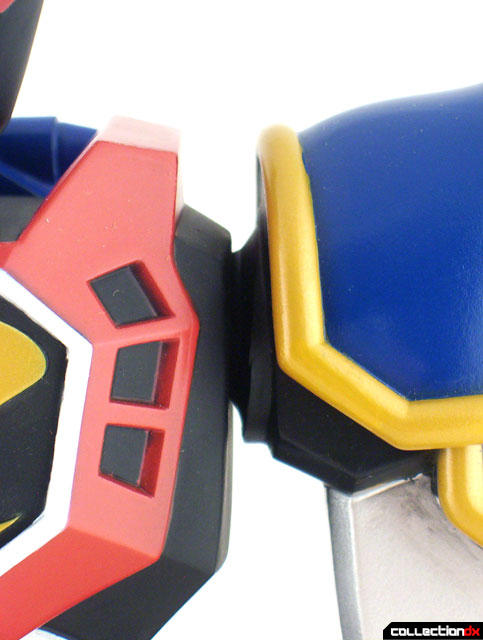 GoShogun does come with an impressive piece of PVC weaponry, a large sword that it can hold in it's right hand. The sword can be a little tough to get it into the hand initially, but once in place it holds firmly. The arm can be posed with the sword in place, but if you move or bump the toy while it's holding the sword up, the arm has a tendency to slide down, due to the weight of the sword. If you actually play with your toys, this might get a bit annoying, but I think most people who would buy this, do so to have it as a display piece only. 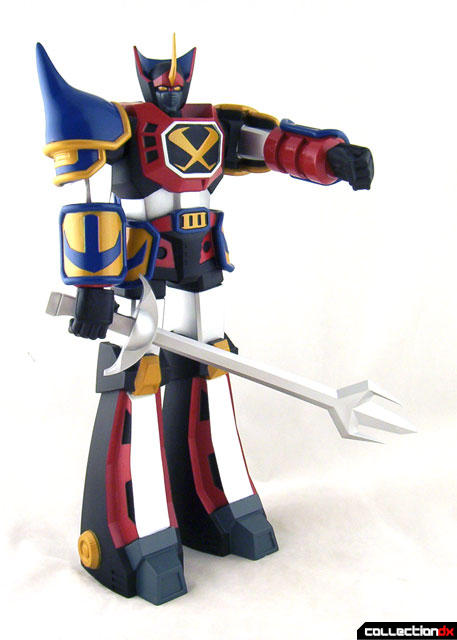 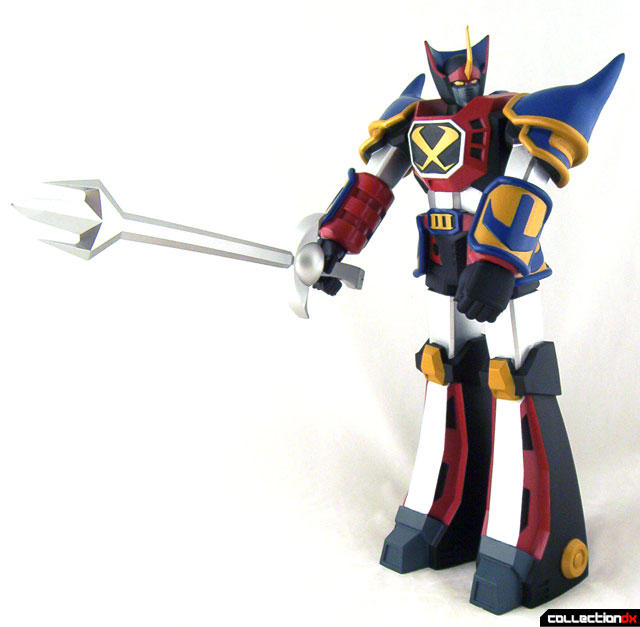 So, judging by this specimen, I think whether or not you'll like this will depend on a few things:

Are you a big GoShogun fan? If so, I don't think the flaws I've mentioned should deter you. It's a great looking piece, at a significant size so if this is your favorite character, don't hesitate, you need it.

Do you like vintage super robot vinyls? If so, I think you'll dig this one, too. It actually compares favorably with the CMs toy in that, although it has a nice modern, anime accurate sculpt, it's old school relaxed pose will really appeal to the vintage toy fans out there. And it's minor flaws in paint application are no worse than on old vinyls. You might even find them charming, in that way.

Do you expect perfection? If you are really, really picky, then you may want to give it a pass. Or, if possible, inspect one in person before buying it. As a collector, only you know how discriminating you are and what you find acceptable and unacceptable. Regular readers probably know I only care about how things look and when placed on a shelf, this one looks great. So I think it's cool and a great value at only $65. And it's likely that I just got a bit of a lemon with that shoulder joint. But your mileage may vary, as they say. 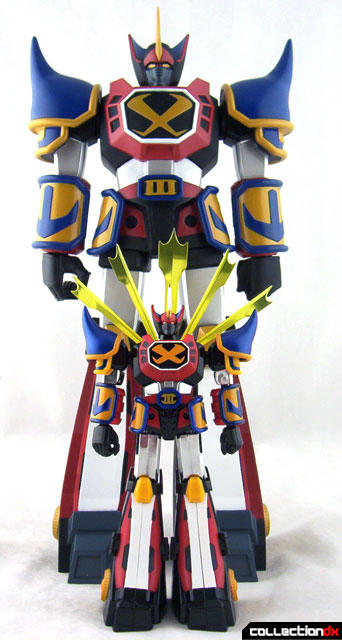 Oh man, seeing the vinyl together with CM's model is really hurting me. They look so good together, but now that fall semester has started I really don't have the cash to spare on this. $65 dollars is nearly a full tank of gas!

Still, I know what I'm writing to Santa for this year.

Don't feel too bad about buying the CM's Go Shogun, its really killer! Also the review on here is what got me to buy it too. Your gonna dig it.

This is definitely a "tweener" toy. Doesn't really go with jumbo or junior machinders. I like the looks of it, but I wish they had just made this thing about 5" or so higher. Unfortunately, as is, I just can't see a place for it in my collection, as nice looking a piece as it is. Maybe if and when they add a few more friends to the series they would qualify for their own little corner.

I dunno about it being a "tweener". I have about five FLOSRs and I think this might fit right in. For the record, FLOSRs are just about 15", so with the cartoon-accurate look, I think the size is just right. Plus, at only $65, you're getting a deal. If I recall correctly, Marmit was charging around $75-80 retail for a new FLOSR...and their limited runs led to rapid inflation of those prices on the aftermarket.

Well, I'll be. I was always under the impression that FLOSRs were about 18" in height, although I know that some such as Boss Borot and the Garland are smaller. Despite my predilection for large sized robots, that is a line I've always managed to avoid so I didn't have any here to compare side by side. We'll have to get together and do that. Even if it is a bit smaller, I do think this GoShogun is a better value than the FLOSRs.

I guess what I mean by "tweener" is between a jumbo machinder and junior machinder (as ambiguous as the term "junior machinder" can be, of course), which is what I tend to collect. I like the look of this, but it just wouldn't fit well in my collection. I've never gotten into the marmits, but given the dearth of jumbos around for less than a grand (and the dearth of juniors period), I might have to go that route. I'm still considering this, especially if one shows up on E-bay for less than $100 shipped, but I'd be more on board if there were a couple more in the series to put it with.

I hear ya. To me, FLOSRs and this toy really shouldn't be considered even in the same universe as JM's or Junior Machinders. They're a totally different animal marketed towards a totally different kind of fan. The only thing they have in common is large size...but if you were to put a FLOSR near a Jumbo, I think there'd be a matter-antimatter explosion!

I'm not sure what character will be next, but I've been informed that this line will continue to be more retro, both in terms of the static posing and box art. This is why it's been separated from Most Wanted and their more modern looking Project Super Robot line. Unfortunately, it turns out it'll also cost more than I heard initially, @ $85 each. I've just altered the review to reflect this.

Now this is impressive. Like I've said before, I'm not very much into vinyls and stuff, but this thing looks sweet. And I never would've known about it if it weren't for CDX!

My wallet may not be happy that I accidentally discovered this site, but in the end I think I'm much better off :)

Okay, folks! Comparison pic with a few FLOSRs has been added!