Galactic Whirlwind Sasuraiger is such an under-appreciated mecha design from the 80's, and I am so glad Yamato is showing it some love. But I am always confused as to what this thing is called. The box Says Sasuraiger, but the vintage toy says Batrain. So which is it? I'm going with Sasuraiger. 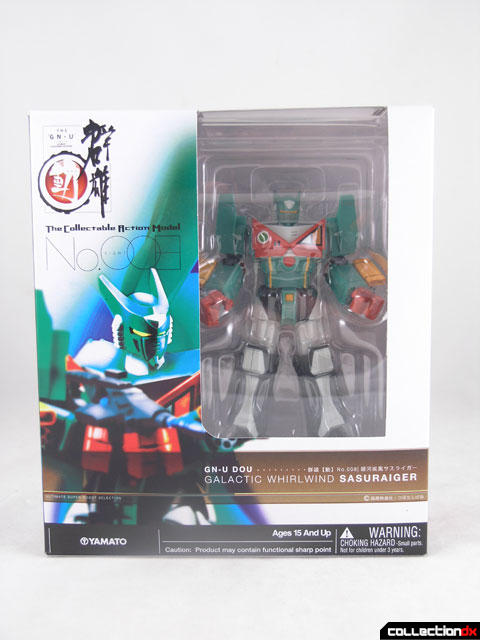 Sasuraiger comes from the show "Galactic Whirlwind Sasuraiger" which aired in 1983. It was the third in the J9 trilogy, following Braiger and Baxinger. I think its cool that Yamato released all three robots in the GN-U DOU line. I mean, all three J9 robots together? That's all kinds of awesome. 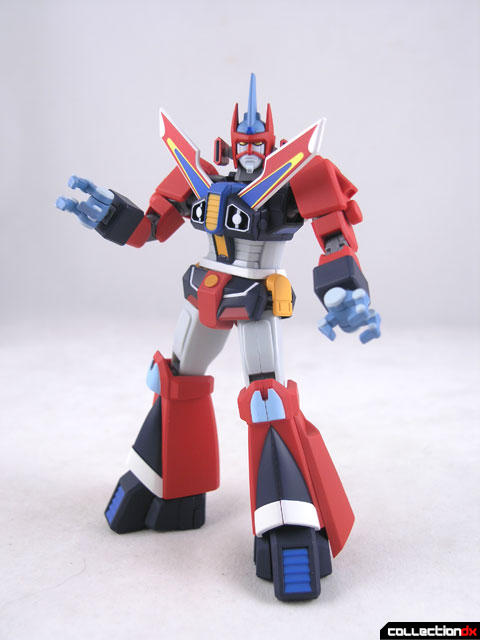 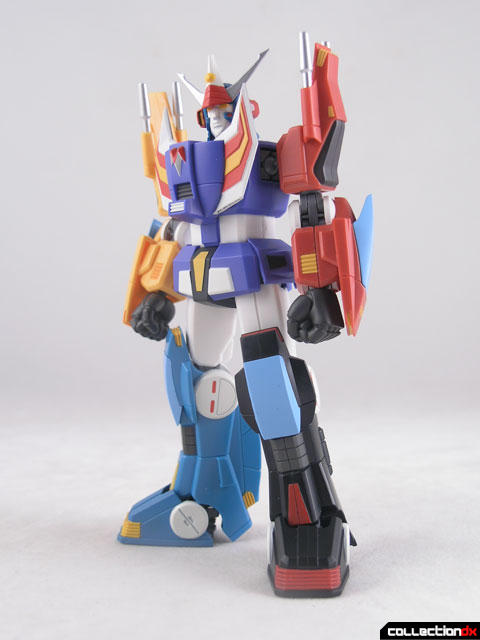 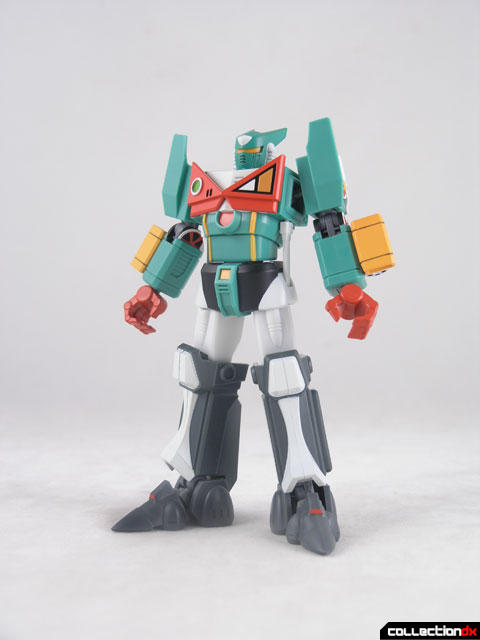 This is a stunning represetation of Sasuraiger. The proportions are so stately and dignified. It's a really modern sculpt of a classic character that has remained intact. I still think that Sasuraiger has one of the best robot heads out there. 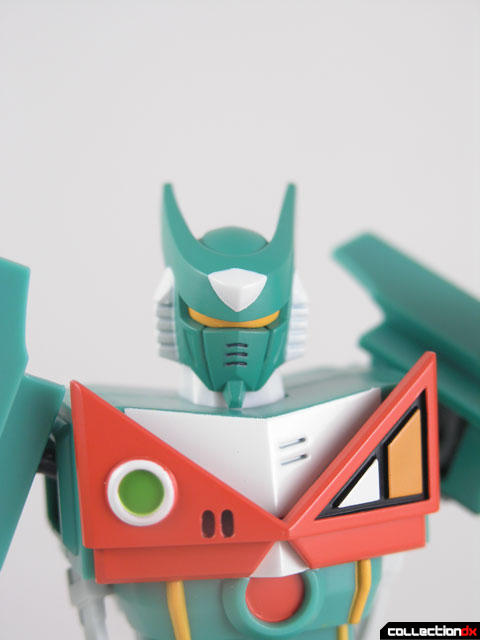 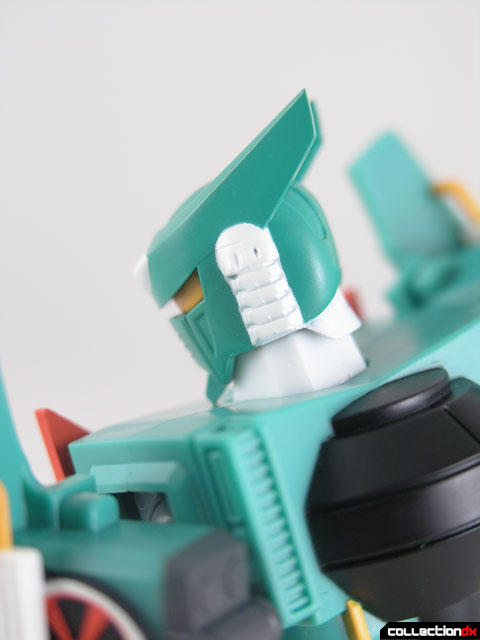 Articulation is fairly limited on this one. Sure, all the GN-U jointwork is there, but the design of the character restricts the range of motion. For example, the hips are covered and have almost no clearance to move. There are two side straps that tuck into the hip that can come out if you try to move the figure too far. 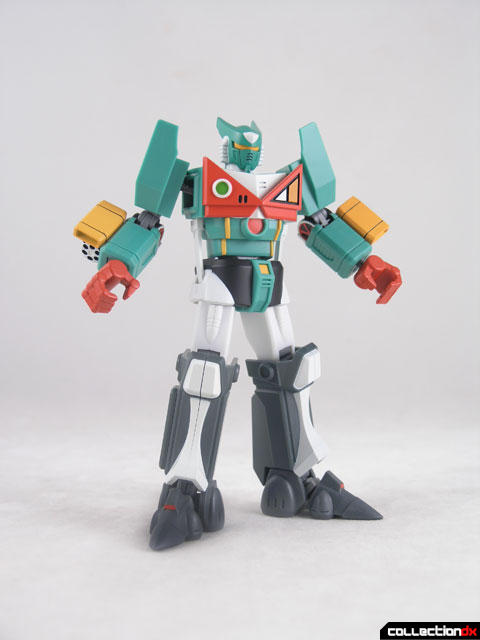 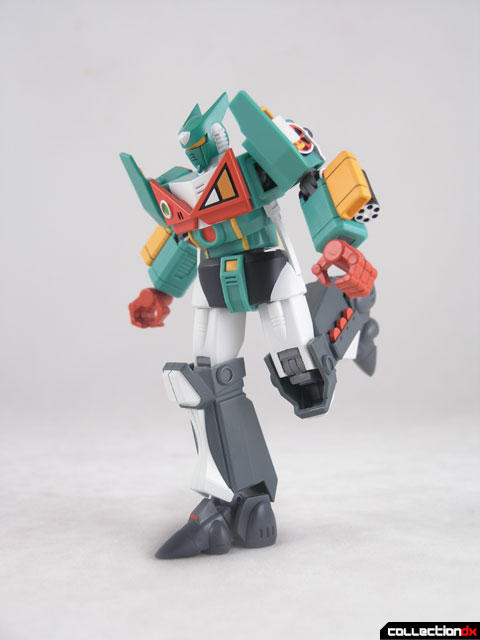 Accessories... well you get a gun and a hand. That's it. GN-U figures usually don't include many accessories, and this is no exception. 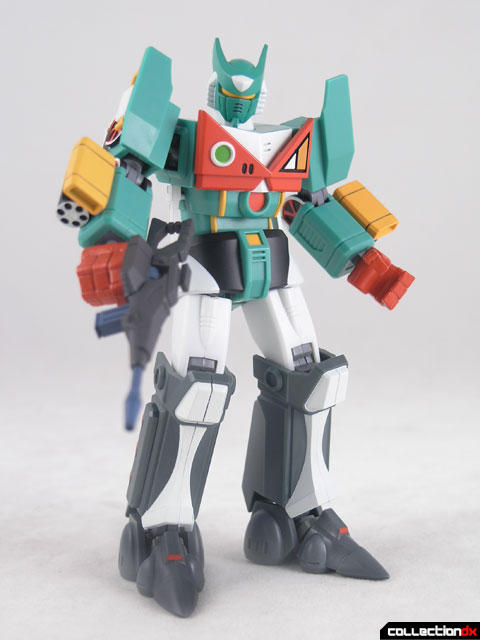 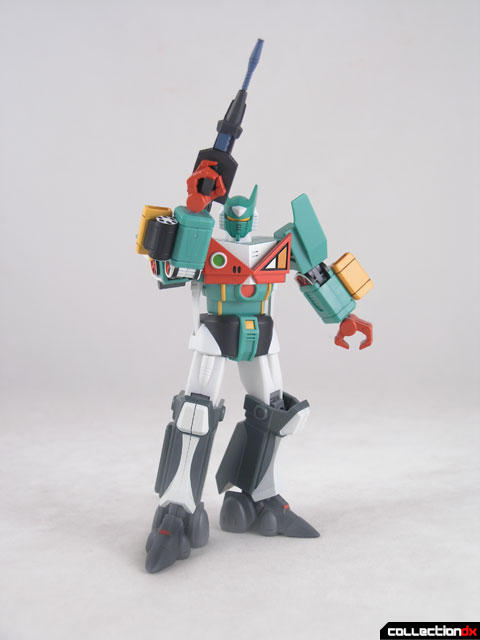 So there you go - Sasuraiger. It looks cool, but does not move much. 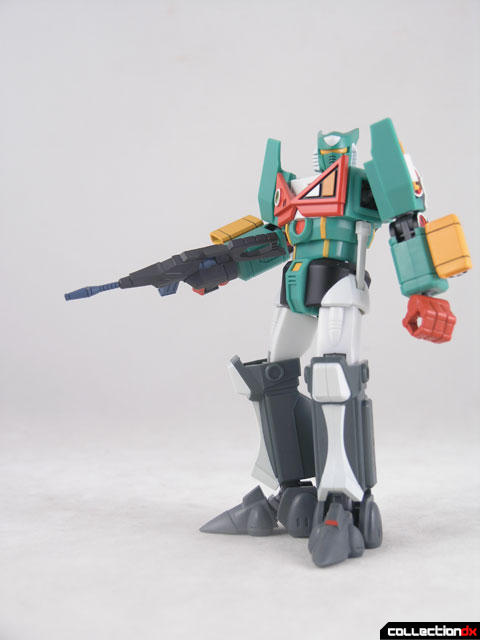 So how tall are these compared to the revoltech? Frankly,I thought the revoltechs were too expensive,allthough I couldn't resist buying a couple. Now it looks like I'll be buying some of these. Next year maybe there'll be a series of 2 inch tall figures that cost 40 bucks a pop!

Looks good and barely moves?!? Now you're speaking my language! LOL Seriously, this is probably the best of the three, imo, and certainly has an interesting and unique color for a Super Robot.

With all three of them,IMO,the colors are the best part. I don't know what kind of paint or dye they used,but all three look like you were watching the show and they stepped out of your TV. I know that's a lame cliche,but it's warranted in this case.

The color really is great.

Also I thought someone needed to post the show's opening, because the theme song is stupendous:

Although I have never watched the show I ordered the mecha from HobbyLink Japan and surprise surprise received it today. The paintwork is exquisite and I love this line of robot figures. Yamato is doing an excellent job. Can't wait for Baldios. Thanks Yamato.

"When you're stuck with a license as retarded as a transforming train, you have to make do with what you've got."

In a moment of impulse, I just bought this and the Braiger. I just love the look of these. I needed to broaden my collectiong horizons. And I figured they would look pretty neat with my Micronauts/Microman pieces. I may pick up that Baxingar as well, when I have a look at these. Now the question is whether I will have the heart to actually open them...

not much a fan of the shows, though i used to have both sasuraiger and baxinger transformable figure back when i was much younger.

currently thinking whether to add this one to my collection.
with the SH Figuarts coming around the corner, it's really a hard decision.

Great update on a nice 80s design. That color scheme is so retro new school, it's street. Try to catch him ridin' dirty...