In Grand Prix 20- “Sibling Battle!?”, after the newly-arrived Engine Jumbwhale douses the flames of a warehouse containing the trapped Go-Onger and Go-On Wings, he engages the Gaiarc’s chief tactician, Hiramekimedes, and his Bandou Moth fighters alone- demonstrating his awesome power and aerial prowess as leader of the Wing Clan. When Hiramekimedes retreats to leave Chainsaw Banki to finish off the impertinent Engine, Jumbwhale calls for Go-On Gold and Go-On Silver to summon forth Toripter and Jettoras to help him. [Jumbwhale]- “Hiroto! Miu! Let’s form the Wings Team!” [Go-On Silver]- “Roger that! Engine Cast- teleport! Ani? It’s finally here! Enjoy it, okay? Hurry!” [Go-On Gold]- O.o? [Jettoras]- “To be able to fight with the veteran hero Jumbwhale...” [Toripter]- “I’ve been waiting for this moment!”

As its name says, Seiku-Oh is the master of the skies, being a combination of three of the Wing Clan’s finest Engines. It is nimble both in the air and on the ground with both shoulder- and foot-mounted rocket engines, able to avoid incoming fire using the rotor shield on the right arm to deflect attacks, while at the same time returning in-kind with its twirling Jetori Turbulence melee attack and Seiku Sonic multi-weapon blast. To set things right, Seiku-Oh has its own stronger form of the Engine-Oh Jetripter’s Jetori Bull’s-Eye that it can use- a thin energy arrow finisher produced from Jumbwhale’s mouth on its chest, and strained on the left arm by the right, called the Seiku-Oh Seiku Impulse. 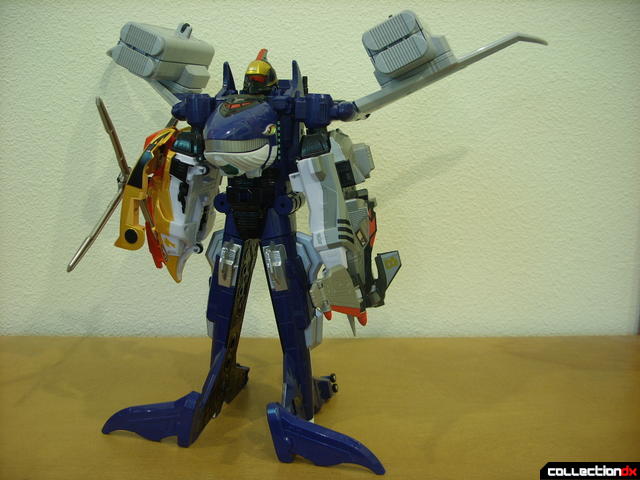 Engine Gattai Seiku-Oh (back) - like Jumbwhale does against the individual Engines- has the largest proportions of the three separate Engine gattai seen thus far (41.5cm wide / 28.5cm tall / 22.5cm long), so it takes up an unusual amount of space mostly due to the narrow wings being suspended from the sides of its shoulders. (Unfortunately, in case you’re wondering, the wings cannot be more-conveniently pointed downwards because the leading edge bumps into the other two arm Engines. However, if you must, Jumbwhale’s wings are designed to detach for safety reasons...) Unlike the DX Engine Gattai Engine-Oh and Engine Gattai Gunbir-Oh which had large gold exhaust pipes on their heads based on the Engines in each, Seiku-Oh’s head- which features the Go-On Wings’ silver logo- is based more on a military pilot’s helmet & air-breathing mask, and has a red visor. (The similar flight helmet-design has also been compared to another earlier flying Super Sentai secondary mecha, the DX Delta Formation Time Shadow from 2000’s “Mirai Sentai TimeRanger”; which also had a cockpit on its chest and wings on its shoulders.) Jumbwhale’s head, however, is featured prominently on the chest. However, because Jumbwhale’s Engine Soul activation buttons rest along the top of him, they become covered because of this- thus explaining why the toy’s mouth can open at all: to gain access to those buttons when Seiku-Oh is formed. While having large wings above/behind the arms is nothing new to Super Sentai, having the wings be the arms is what sets Seiku-Oh apart. This means that, in order to move its arms up or down, the wings, too, must tilt up-or-down accordingly. Now, because of their positioning at the very front of the main wings, there wasn’t enough space for both the connection points for Jettoras/Toripter and the shoulder joints at the same place. Therefore, the shoulder joint(s) are located just behind the attachment holes for each Engine, so that- when rotated- the attached Engines will pivot slightly forward of the joint itself, though this isn’t really detrimental to the overall design. Again- as with the DX toy version of Engine-Oh Jetripter- Seiku-Oh cannot properly spin the rotor on its right arm unless the arm itself is twisted at the shoulder because it bumps into the right wing! Despite the reach of the wings on the shoulders, Seiku-Oh remains well-balanced when moving the arms about due to its long feet. The legs are again splayed a little as it stands, but even though the thighs have a twisting joint, you cannot really pose it with the legs turned. (The thigh joints are there only for use in a later transformation.) I wish there had been some lever-or-something that could have rotated Jumbwhale’s tail flukes around when combined as Seiku-Oh, because they are really distracting sticking out sideways like that from the feet. (If it is meant to be a flying mecha, then wouldn’t they rather be placed on the ankles or mid-way back on the foot???)

As far as weapons go, you don’t have any hand-held weapons to deal with. Instead, you have Toripter and Jettoras which you can use the same as you always do with Engine-Oh Jetripter; which means that you get to keep those great elbow-twisting joints. As to Seiku-Oh’s range of motion, it’s pretty much the same as the Engine-Oh’s- just shoulder joints (and no Gee-Dee neck joint either). So that means you still get the standard 45°-increments forward & backwards, and the two rotating elbow joints for more average poses [for a DX Super Sentai mecha]. (It’s really a shame that we didn’t get more of Gunbir-Oh’s dynamic shoulder joints...) Now, unfortunately, if you want to recreate the Seiku-Oh Seiku Impulse finisher, you’re kinda stuck on your own for this. The legs do not move, and snap into those slightly-angled positions while changing Seiku-Oh. All three Engines Souls are still fully accessible in this form as far as their activation buttons go. However, inserting or removing them while it is transformed like this is in no way easy. While Jumbwhale’s can be easily removed from his back, with Toripter and Jettoras you have to disconnect them since their access doors also are also their elbow connection joints. Ironically, Jumbwhale’s is the only one of the three that you can’t easily see its bright red LED light when it activates in this form; it shines out from under Seiku-Oh’s right armpit. 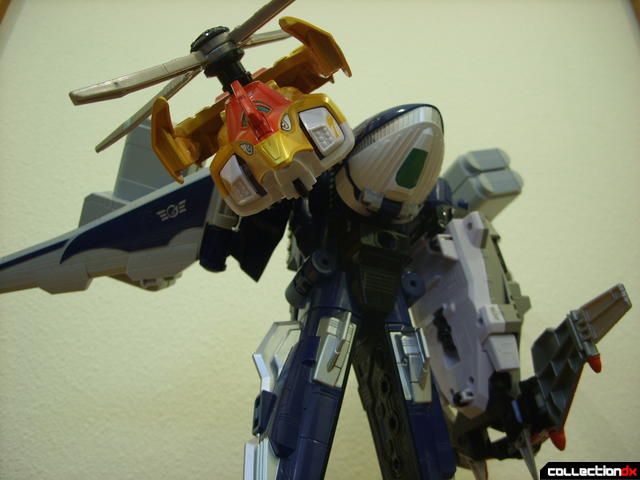 I’ve already given my recommendations and opinions on the three individual Engines, so I’ll not rehash that here. Despite a return to the norm for posing, this is the second-best of the Engine gattai, in my opinion. The flukes on the feet are annoying, we’re unable to fond the main wings down for a storage form, and the head cannot turn side-to-side or even tilt upwards for no-damned-good reason... again! The legs, while narrow enough and with great long feet, cannot pose once more, and really feel like the weakest-looking point on the whole toy. I also thought it kinda boring that you had to disconnect Jumbwhale’s head to make this transformation. Now, perhaps later on this would be needed, but a pair of fixed-in-place swinging levers would have been nice. While it is supposed to be slimmed down, Toripter and Jettoras literally scrape past Jumbwhale when moving those arms up and down, indicating that the shoulders are a little too close together. The head is nice (except for the complete lack of a neck joint!), as are the winged shoulders, and the two accessory Engines are not misplaced either in the combination. And, I don’t know why, but Jumbwhale’s blocky jet engines on the shoulders aren’t as misplaced as I thought they might be before I got it, so I can’t really complain there. Overall, the Engine Gattai Seiku-Oh is a good design despite its quirks.

…but hold on a moment-! Jumbwhale has one last role to fulfill before I’m done with him. In Grand Prix 22 – “Final Request”, Hiramekimedes is banished from the Gaiarc for failing to defeat the Go-Onger and Go-On Wings as he promised. Wishing to revenge himself upon the Gaiarc, he seeks out the Go-Onger to help him. Before he dies from injuries sustained in an earlier assassination attempt by Bouseki Banki against him, Hiramekimedes challenges Hiroto (Go-On Gold) and Toripter to a one-on-one air race- if the Wing Clan Engine wins, he would divulge the location of the Gaiarc’s Hellgaille Palace island headquarters. Go-On Gold accepts, and then wins the race. But when they arrive, Go-On realizes that he has been set-up, and that Hiramekimedes wasn’t actually expelled from the Gaiarc! Go-On Silver, Jettoras, and Jumbwhale arrive ahead of the Go-Onger, and Seiku-Oh is formed to beat back the grown yarn-spinning Bouseki Banki. Due to the fake island’s suddenly-bad weather, Seiku-Oh cannot fly, and is being heavily assaulted. Then the Go-Onger arrive to cheer on Hiramekimedes, unaware of his betrayal just yet (having swam Engine-Oh and Gunbir-Oh across the Pacific Ocean to the island). Thought the two Go-On Wings still cannot see why Jumbwhale has such faith in the Go-Onger despite their immaturity, the Go-Onger are filled with rage and attack Bouseki Banki... Engine Gattai Series #9- Engine Jumbwhale is the final component required to make a new combination which also utilizes all seven DX sets released thus far. And so, please go on to the final page to read the review on the Engine Gattai Engine-Oh G9! 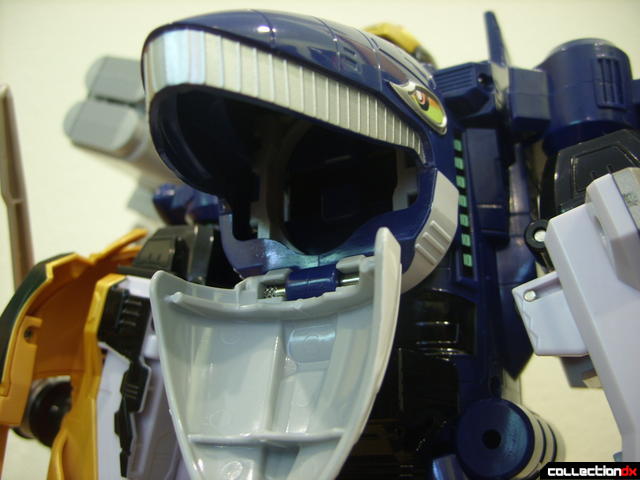 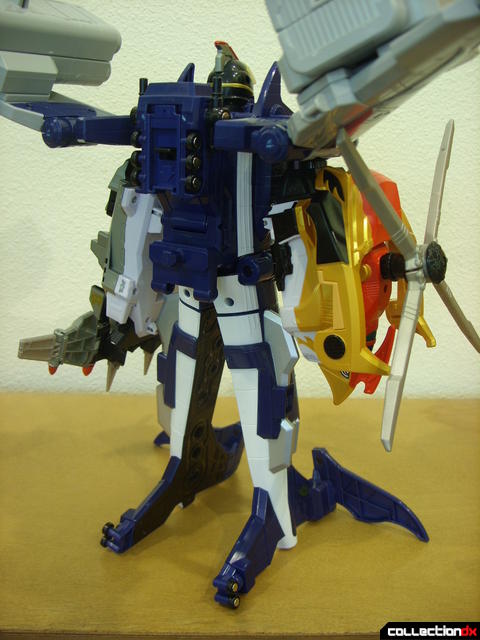 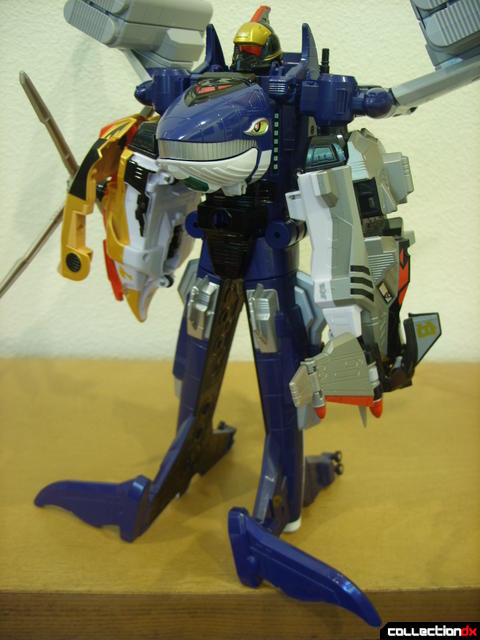 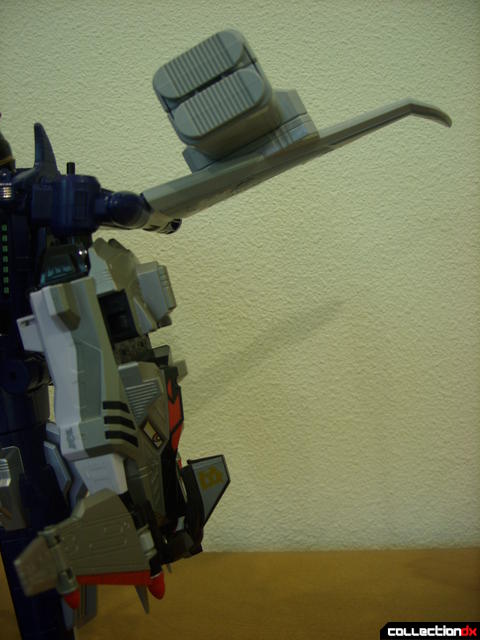 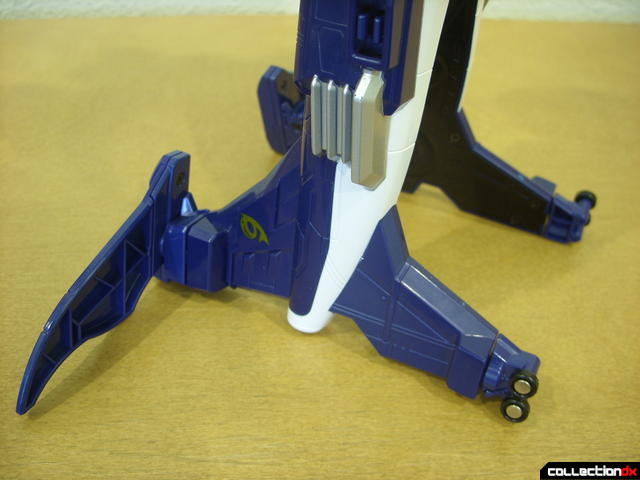 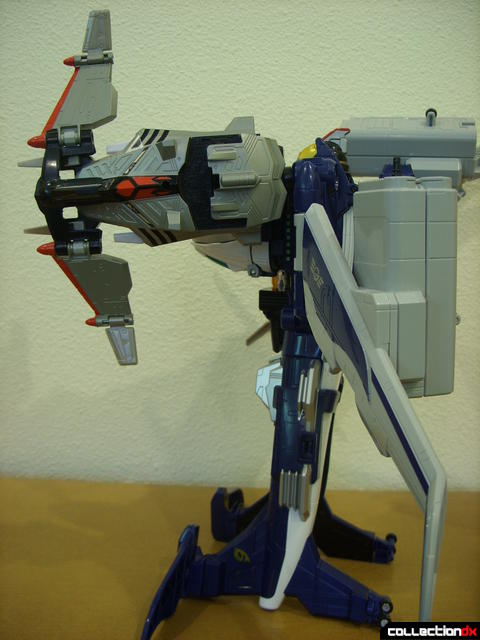 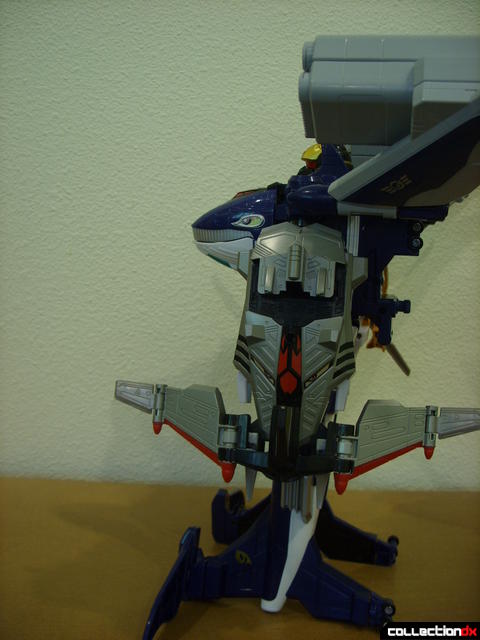 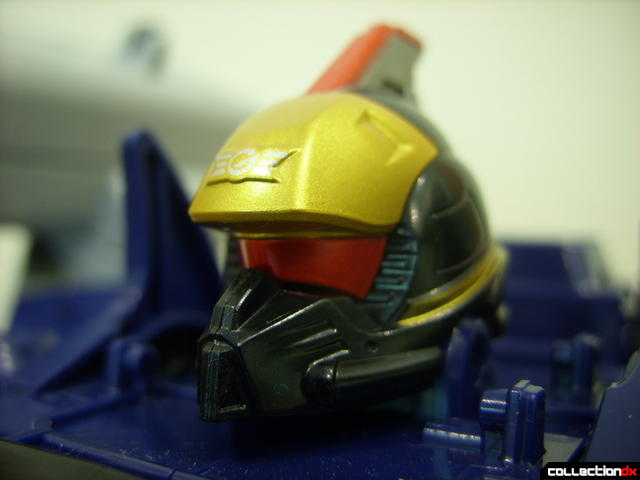 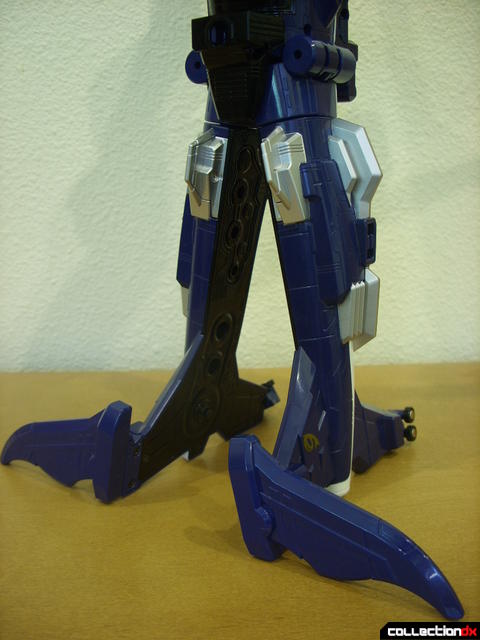 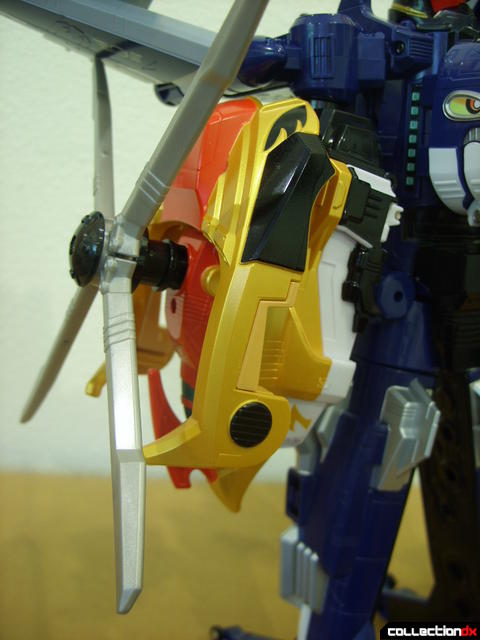 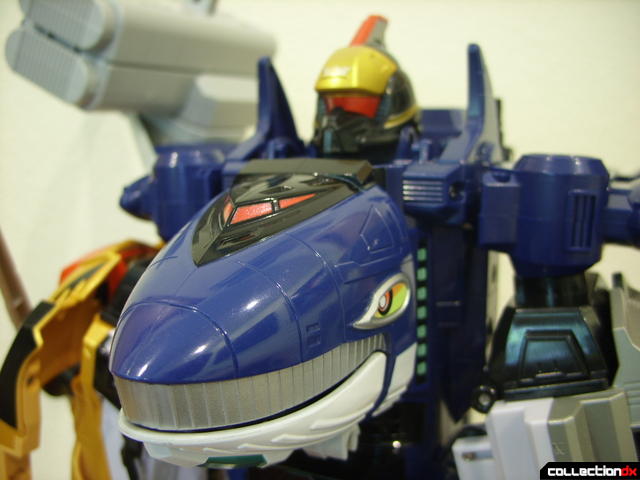 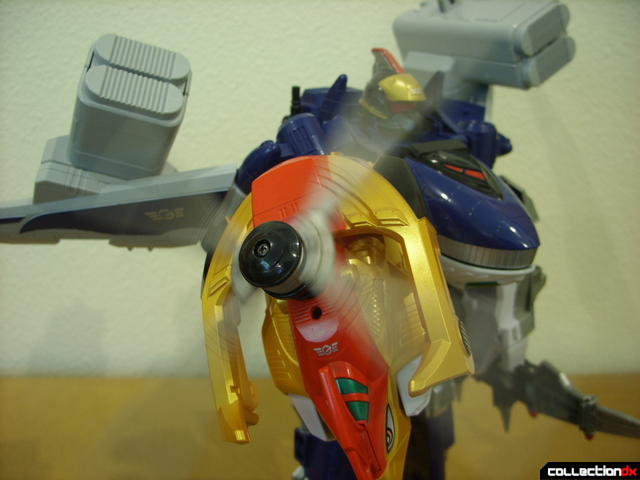 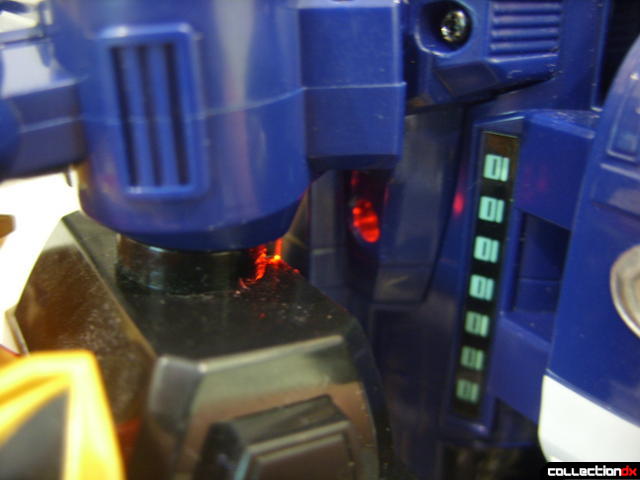 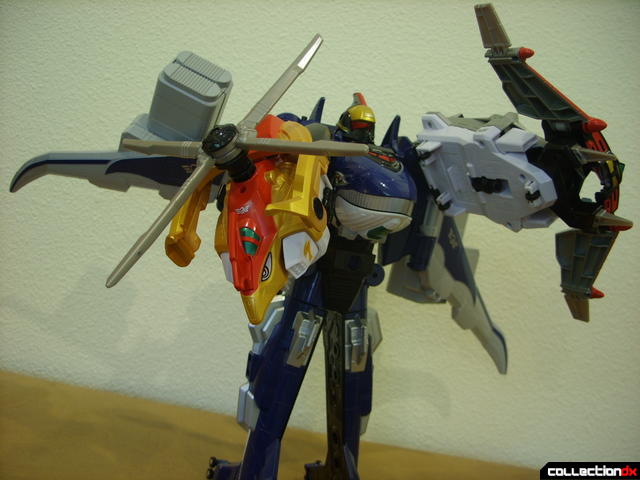 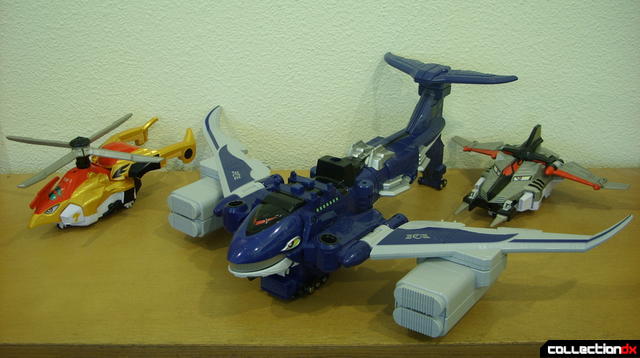 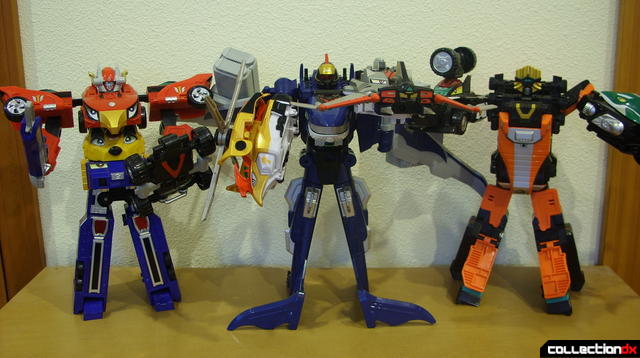 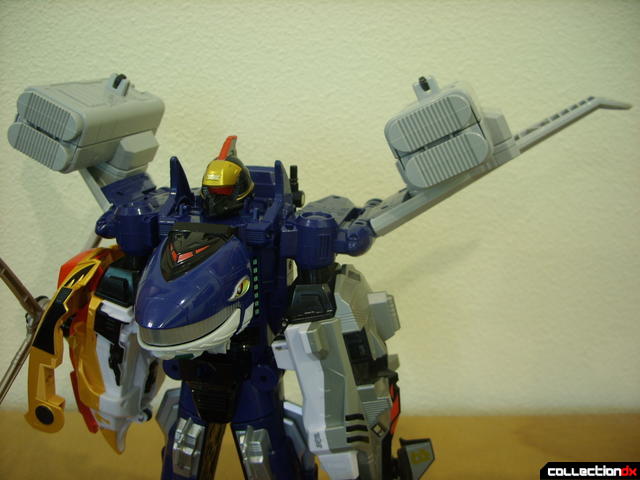 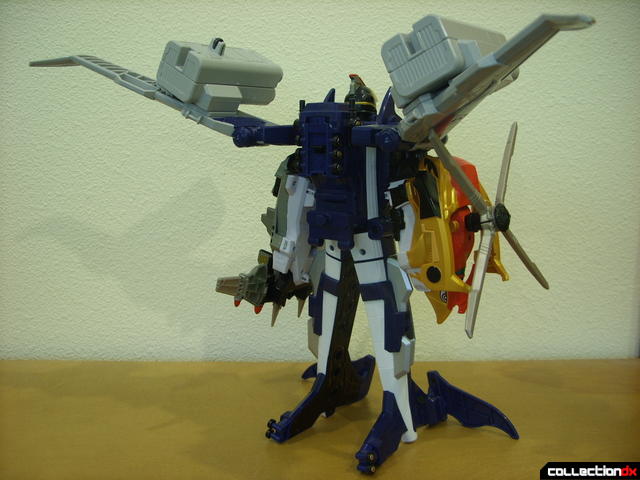 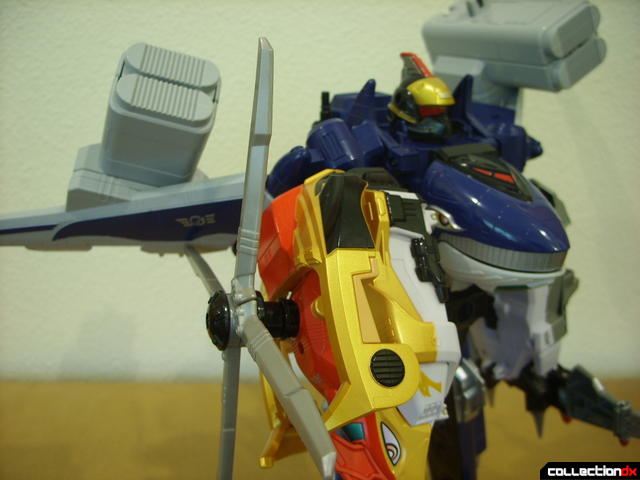 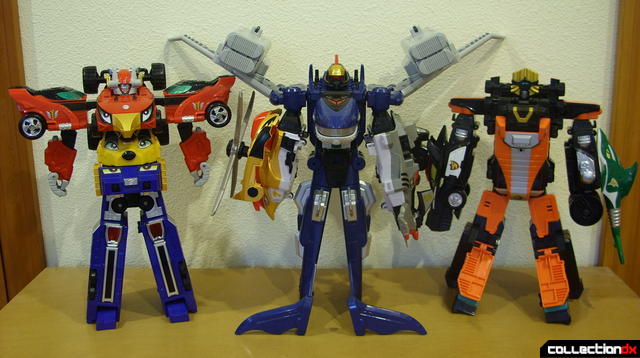 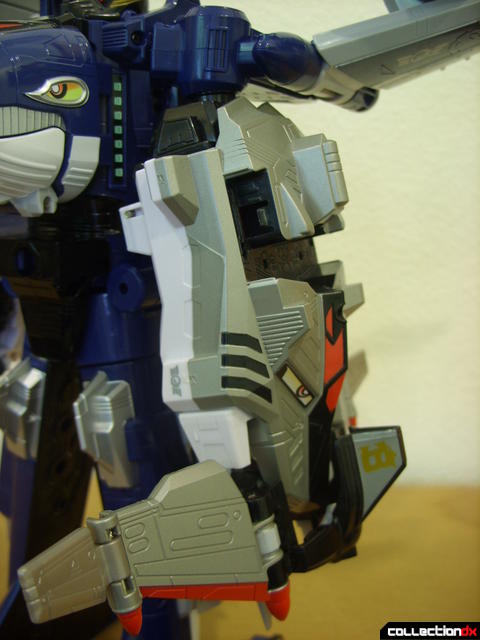 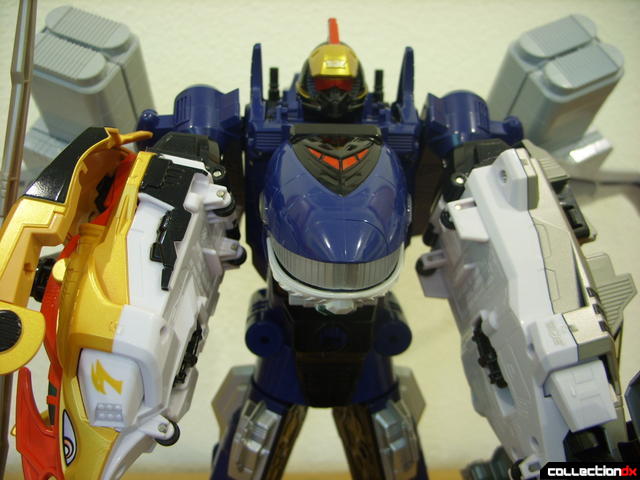 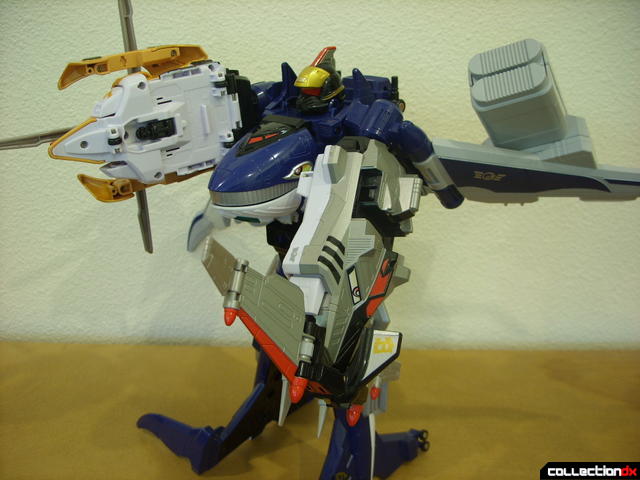 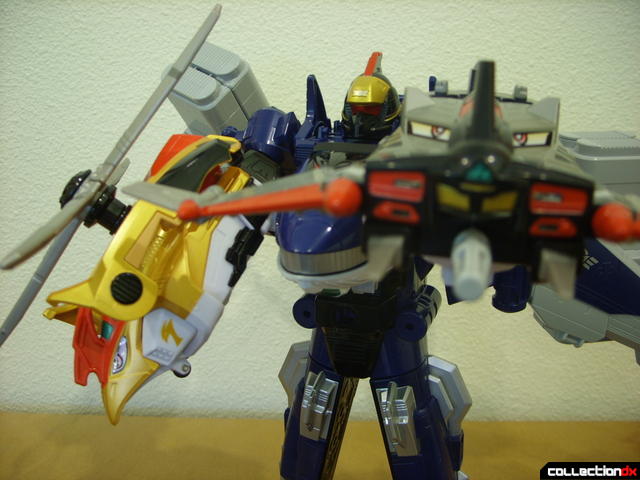 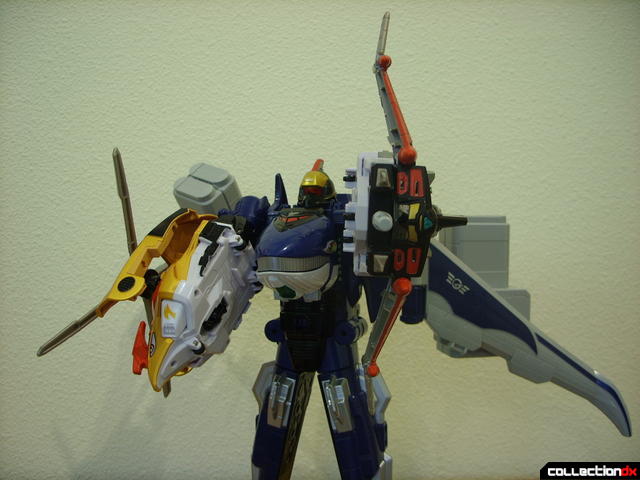