Dennou Chogokin was a short-lived offshoot of the Chogokin line that featured toys with electronic elements designed to interact with your computer. Only two toys were released in the line, both of them Tachikomas from Ghost in the Shell. 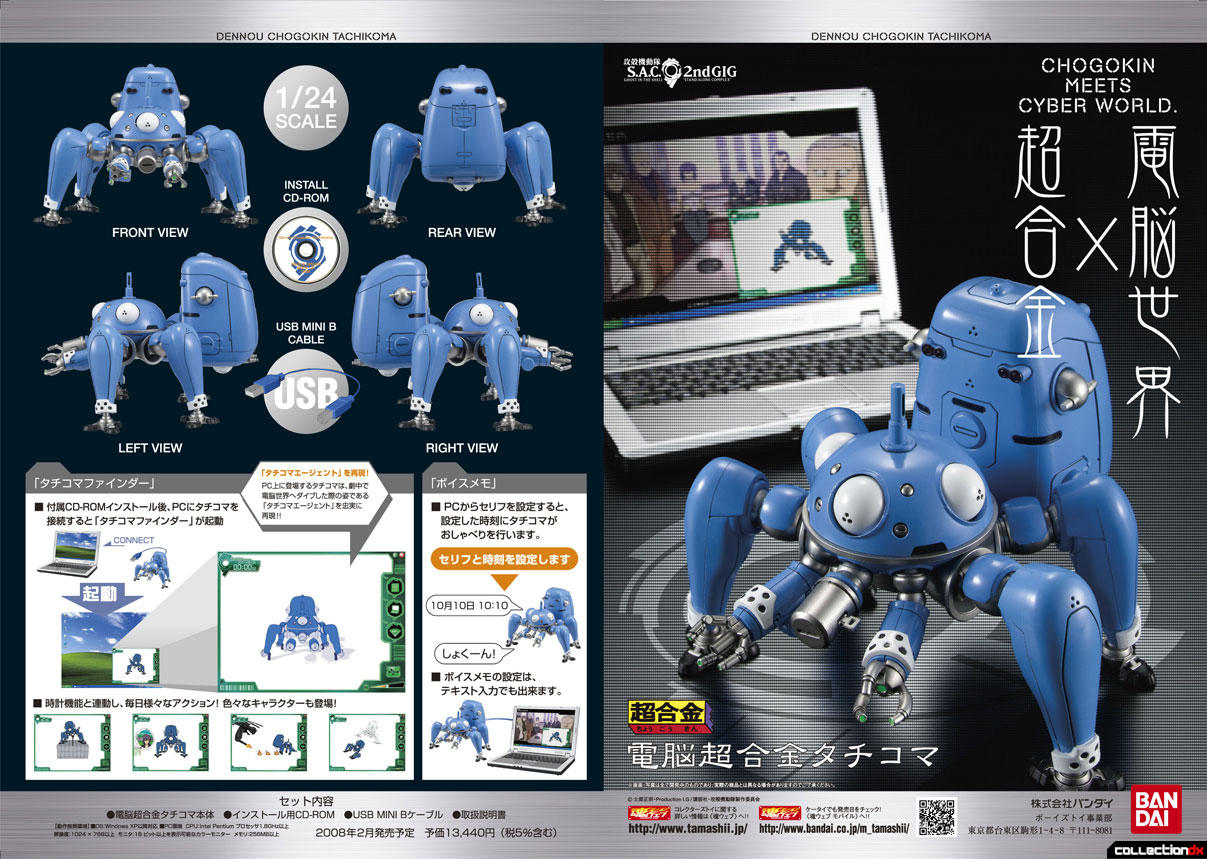 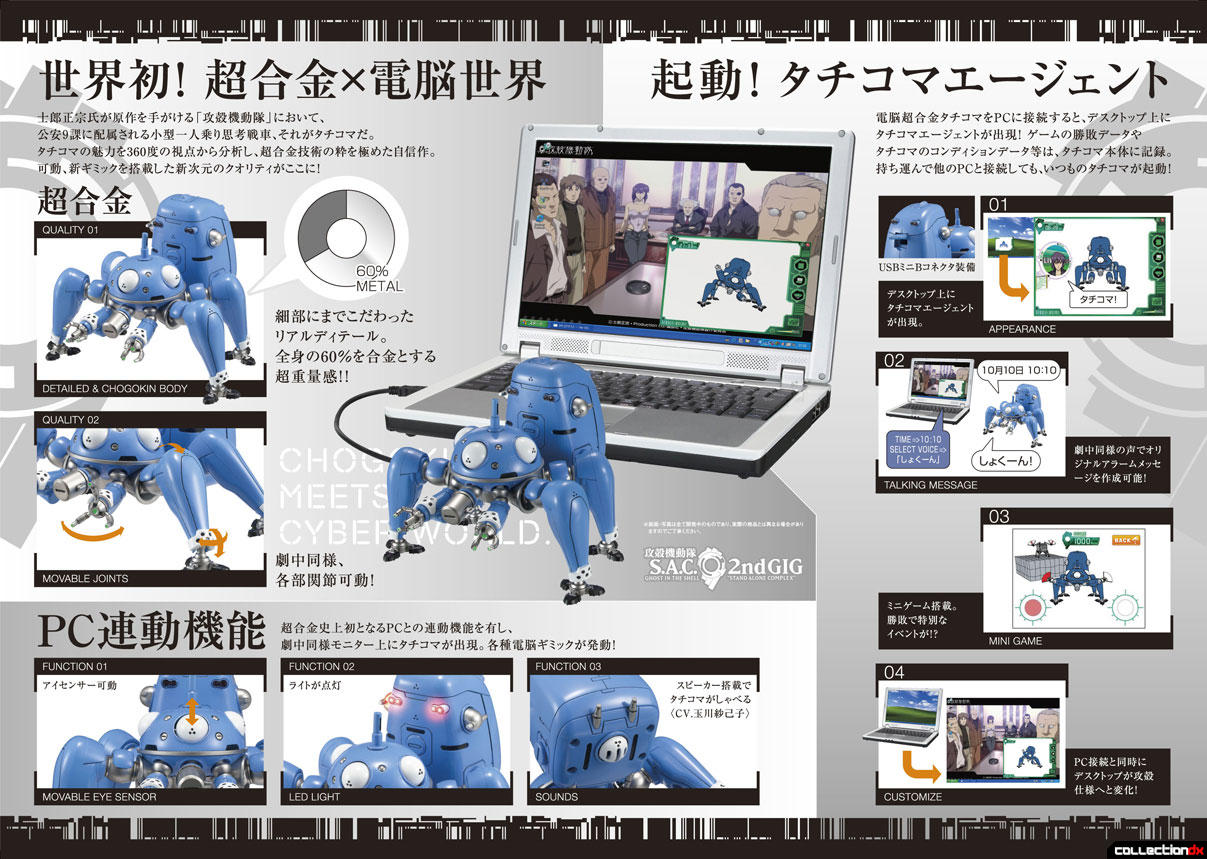 While these toys are marketed around their central “cyber” gimmick, at their core they are great chogokin figures in their own right. 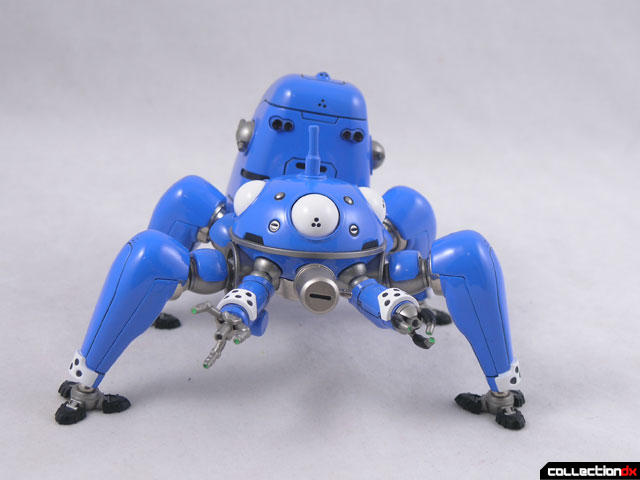 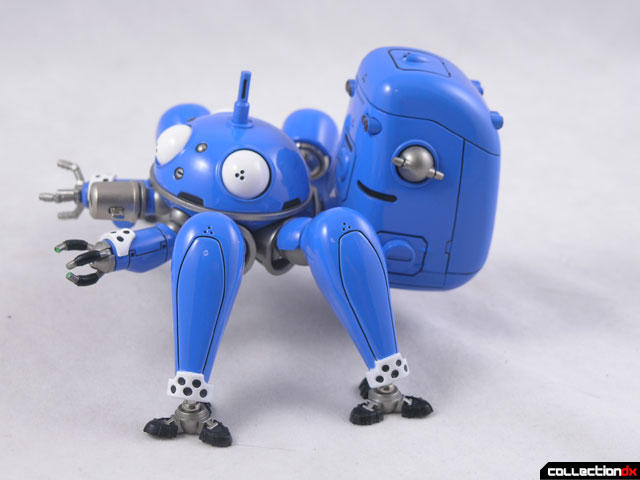 The Tachikoma is a sentient robot tank which can accompany members of Section 9 on any number of missions. There are a number of Tachikomas on duty at any given time, and all share a collective knowledge as they are synchronized each day. 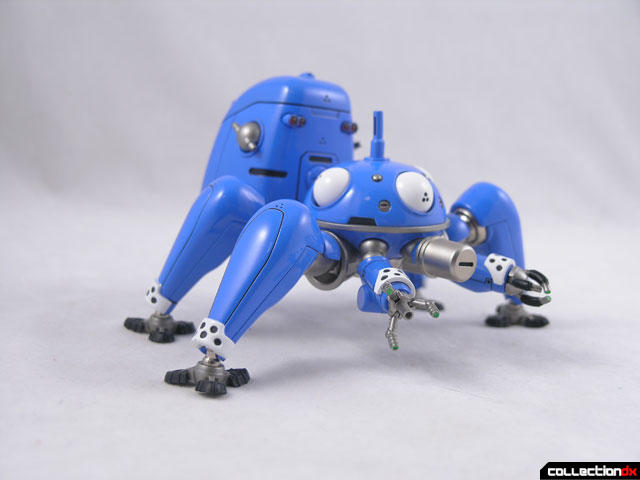 But what makes the Tachikoma really enduring is the child-like voices and curious personality given to them by their creator, Masamune Shirow. They often provide much needed comic relief in an otherwise dramatic series.

The Dennou Chogokin (or “Cyber Chogokin”) comes packaged in a nice box with a cool flip-up velcro lid. There's no window inside, just an illustration of the gimmicks. The packaging proudly boasts that the toy is 60% metal, and I don't doubt that claim.

Inside the package the following is included: 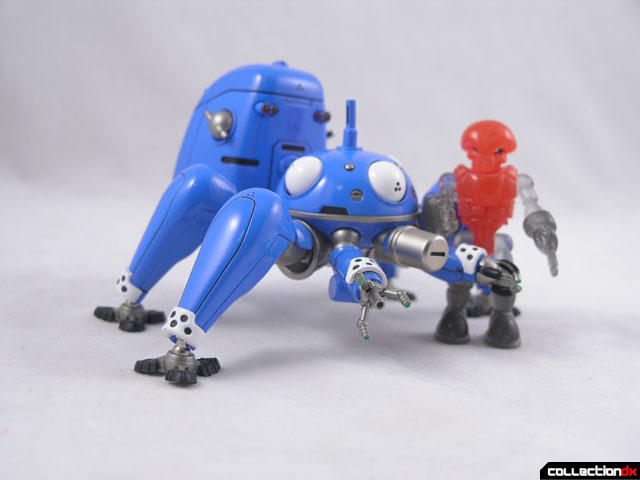 The toy is self contained. There is nothing to attach, nothing to assemble, no decals to apply. As a toy, it's ready to go right out of the box. 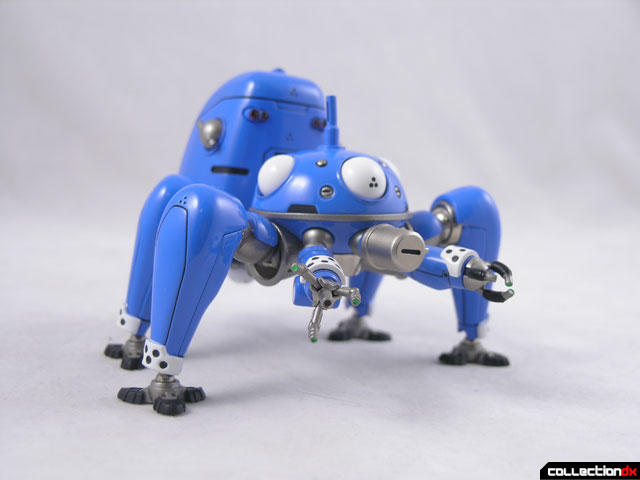 You feel the weight right away. Almost everything moves in some fashion. The construction is top-notch and the paint feels like an automotive paint job. 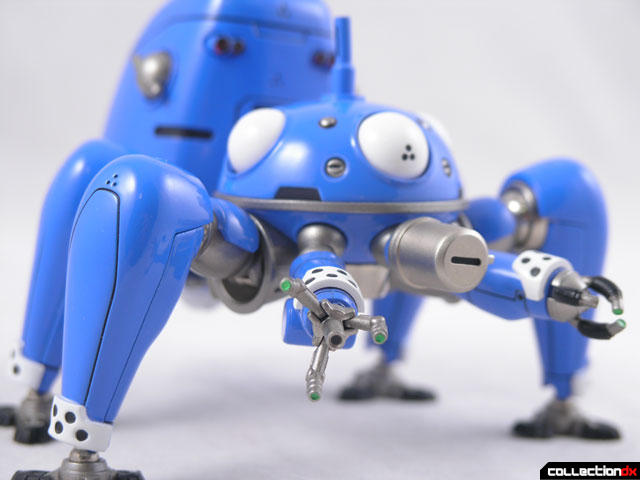 Each limb is fully articulated. The joints are diecast friction joints and shine like crazy. They are jointed at the body, knee and ankle. Each “foot” is on a ball joint and features three moveable toes. Each leg section is metal. 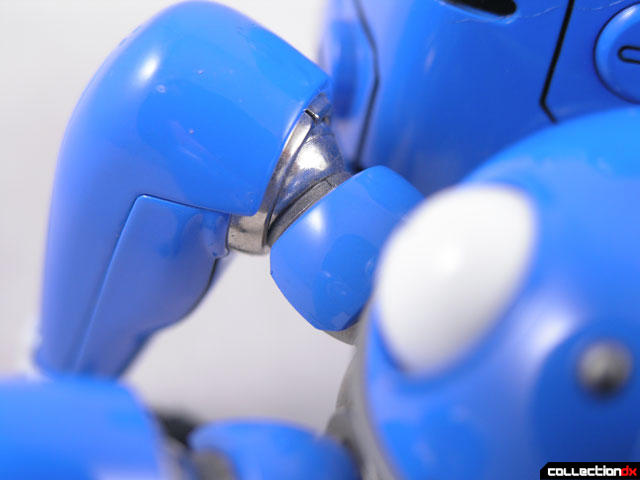 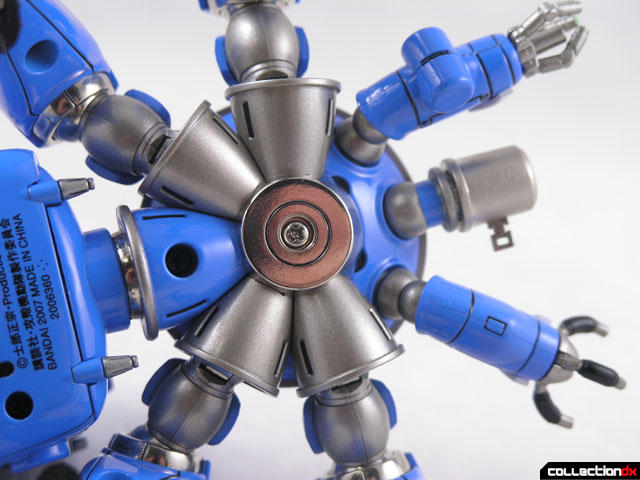 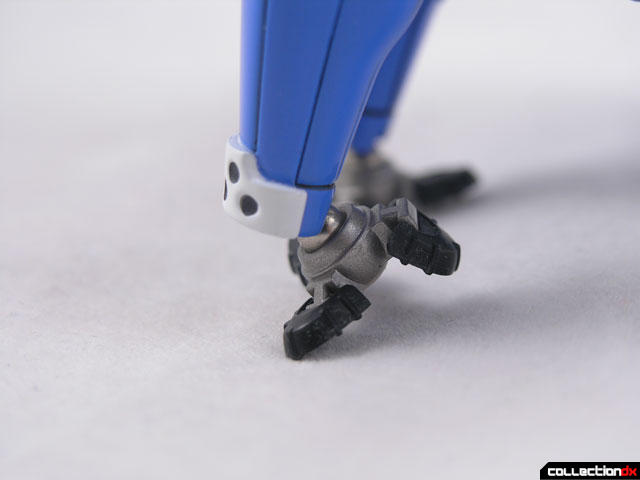 The main body is also metal and the three “eyes” are movable. 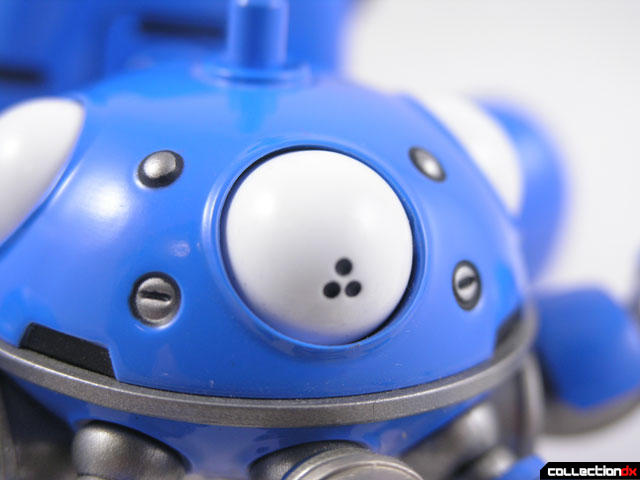 On the front of the figure there are two movable arms made out of PVC. At the tip of each arm is a claw with moveable fingers. 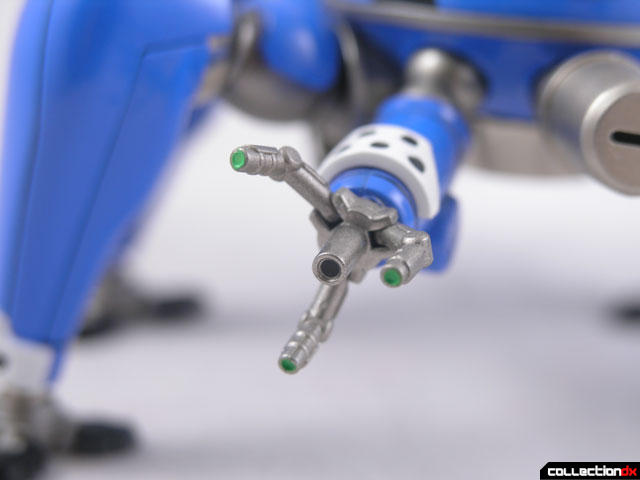 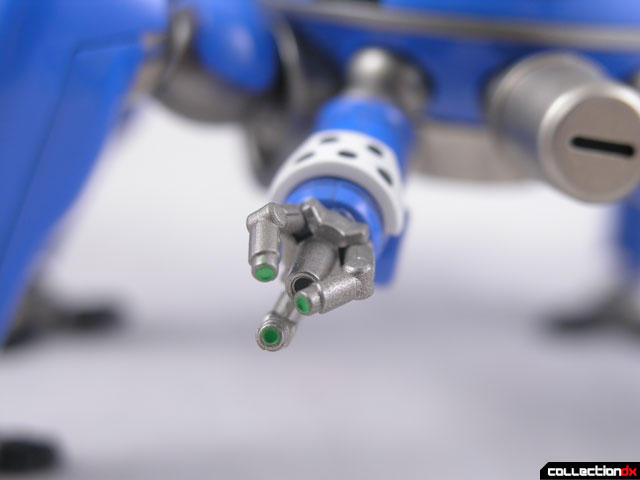 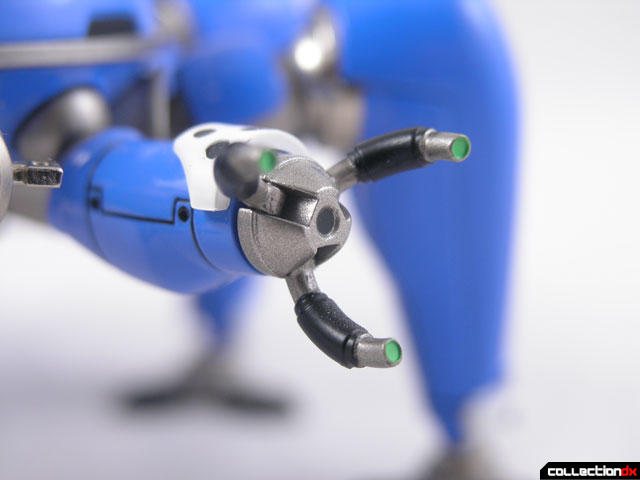 In the middle (the snout) there is a removable metal cap that is held in place with a metal pin. This appears to be a grenade launcher of some sort. It's a nice little added detail. 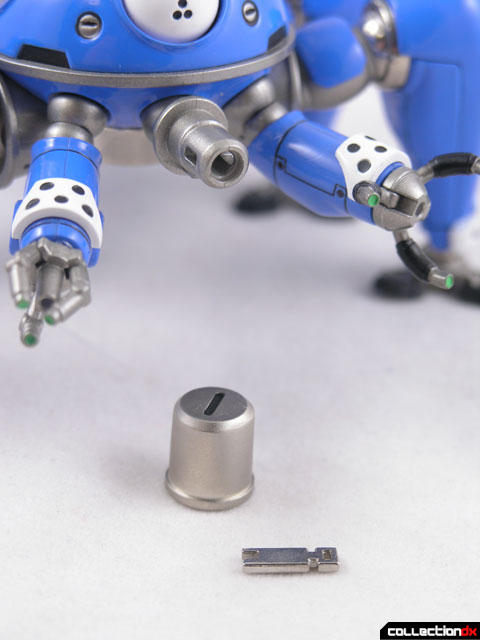 The back unit acts as a cockpit for an optional human operator, but on this unit it does not open. This is because all of the electronic components are housed in this unit. There's a little door that opens for the USB plug, and the grey cannons on the side swivel, but that's about it. 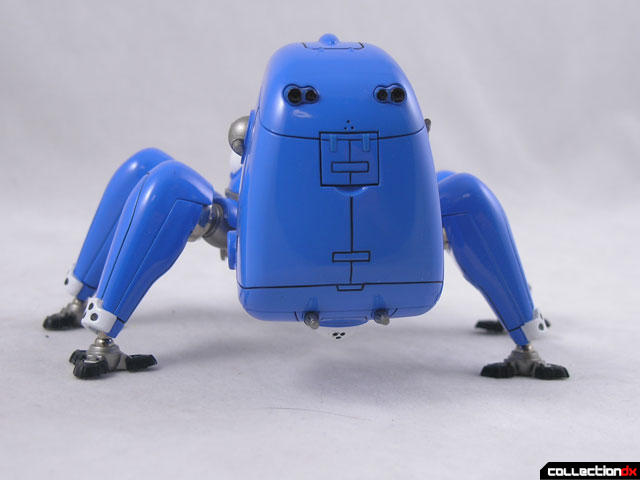 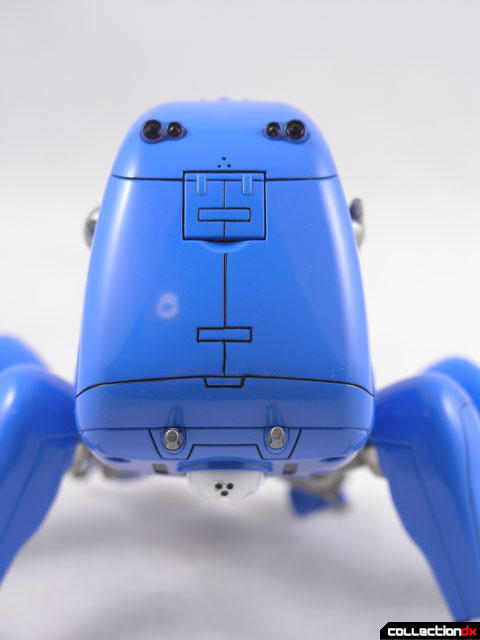 So the toy on it's own is excellent – a really fine pice of gokin. But what about the cyber gimmick?

Before using the toy you need to install the software. An included CD ROM installs the japanese software. If you can't read Japanese, just click the button that looks like its highlighted until installation is done. 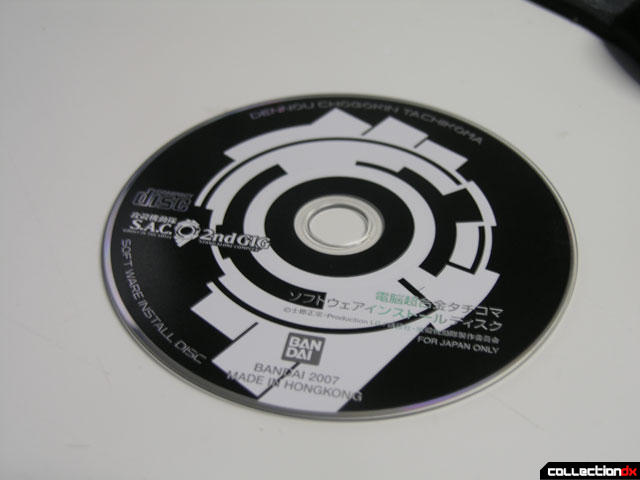 You then plug in the toy via a USB cable and the app on the screen springs to life. A window opens and right away you see a random animation of a Tachikoma. When it speaks, it speaks through the speaker on your toy, not the computer. The central eye moves, and the red lights on the body light up. That's about all the toy does when plugged in. 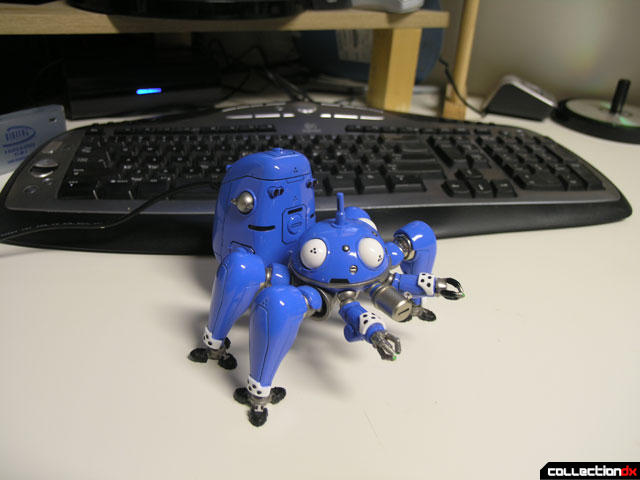 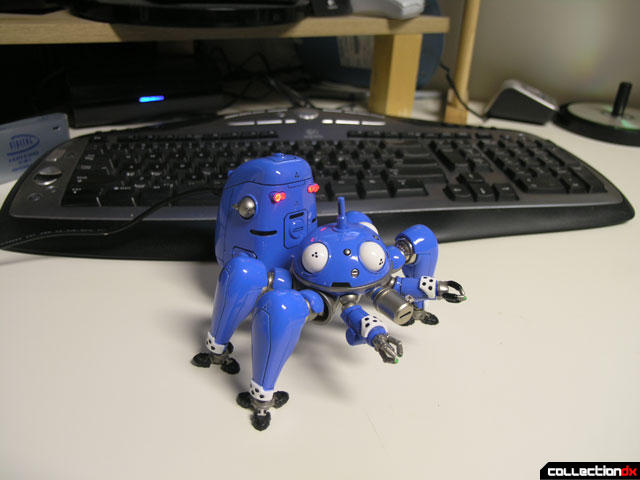 The software is neat though, with a few cool features. There's a series of reminders you can set that can either alert you in pre-set Tachikoma phrases, or in text messages. Another screen allows you to set a screen saver or change your desktop, and another window has a small guessing game you can play. 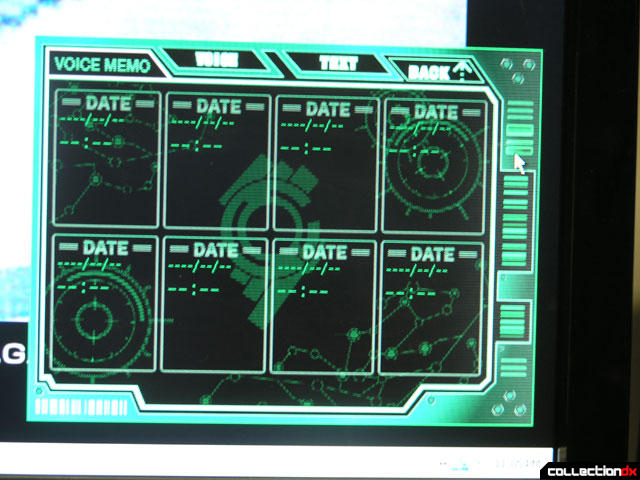 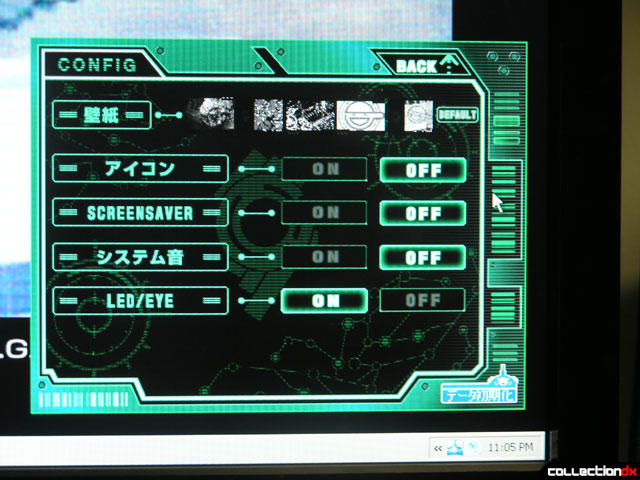 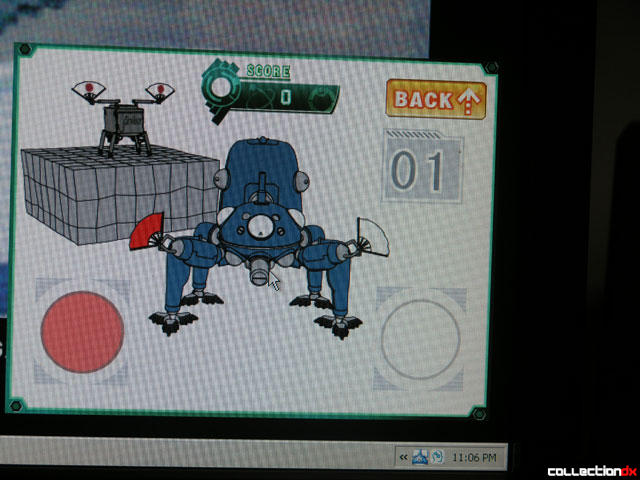 The best part of the whole software is the random animations that just come up if the thing sits idle. They are really amusing and some are interactive. When you see the pointer icon, click it and it and the animation changes. It also says hello and goodbye as you enter and exit the software. 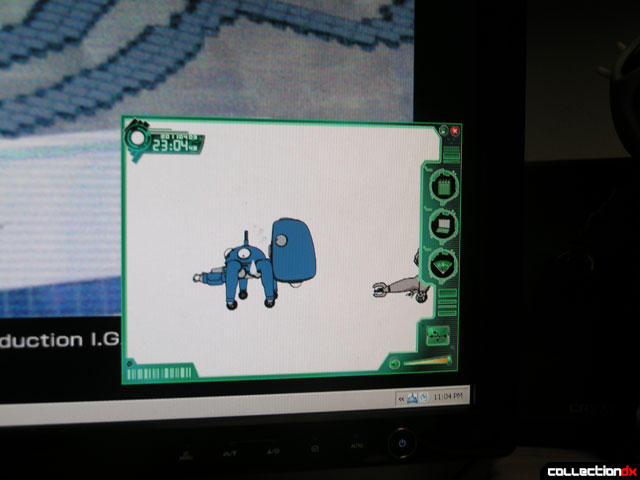 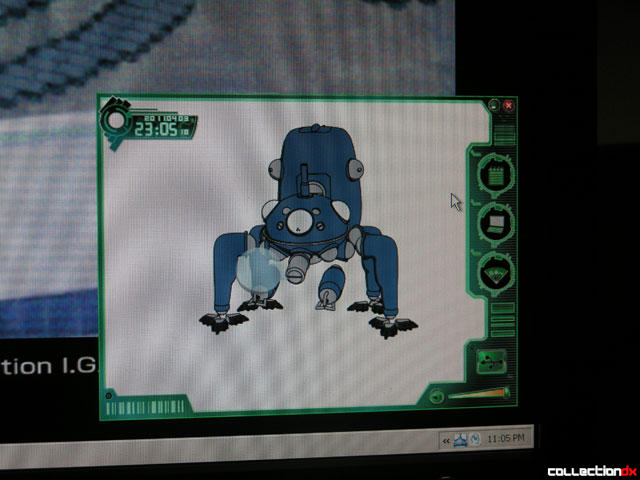 For a while, these things were available for a steal at about 50 bucks as they just sat around for some reason. I think collectors were put off by the computer gimmick and didn't realize it was a great toy on its own. Now though they are back up on the secondary market for far over their retail price.

Bandai re-released this Tachikoma in 2009 with a metallic paint job and upgraded software, but the core toy is exactly the same.

Even if you never plug it in, it's a great toy.

5 comments posted
Someday our robotics and

Someday our robotics and miniaturization will be so sophisticated that such toys will not be limited to a light gimmick. They'll have full mobility, and may even be controllable by a kinect-like interface. You could have a friend come over with their Big O, and you could literally fight it with your Daitarn. They may need little rubber gloves to prevent paint scratches.

Too bad for the tachikoma. It's a great idea trapped in the early 21st century.

Very nice toy, I think I want one! I have never been interested in interactive computer toys but this looks like loads of fun, especially for my work computer. Bring this to the office and make the work day go faster! I also loved the design of Tachikoma.

always used to see this thing like you said, dirt cheap while I was looking for the Fewture version and passed on it due to size...looks much nicer than the Fewture version I have...now it is like 300 usd on ebay....I will put it with my list of things I missed the boat on and not willing to pay the price now for...like the Fewture black getter...lol

Yeah, I'm the same - I missed out and am now utterly kicking myself. HLJ was selling them for ages for around $50. Now you can't get one under $300... I didn't get it at the time as it dropped when the 1.2 version was released with the metallic paint, and I was wanting one of those instead and just never bought it.

Ah well, at least I managed recently to get a Good Smile tachi for retail...

Well, I managed to get one myself finally - for 7000 yen plus postage. Under $100 all up. I'm very happy with it. I got it from Mandarake. They really have some awesome deals. If you search for the Japanese text of the stuff you are looking for you might have better luck too. Initially I found it and it was second hand, 5000 yen, so I ordered it, and they contacted me telling me thay it was out of stock, but they had a new one for 7800 yen, and I said hell yeah, and when I was billed for it, I only got charged 7000. I was stoked. It arrived yesterday.

I couldn't frigging believe it though. I got it for less than retail, new, when everywhere else on the net is looking at around $300 for them. Mandarake ROCK.

I should see about doing a Tachikoma comparative review somewhere. I have the Good Smile Ghokin, Fetwure Ex Ghokin, Bandai Ghokin, and Megahouse Perfect piece, and a wave.