Every now and then I find myself fascinated with a rare variant mecha. For Macross it's the VT-1, for Gundam it's the GM Sniper Custom, and for Mospeada it's the Dark Legioss. In terms of screen time, the Dark Legioss is prominently featured in the last episode of Genesis Climber Mospeada (Robotech: New Generation) as part of the 3rd Invasion Force. The thing I like about the Dark Legioss is that it is the evil version of the Legioss with its dark color scheme, claws, and evil red eye. For a review of CM's Corporation's Legioss & Tread set, check out Josh's review. CM's Brave Gokin Dark Legioss is mostly the same as its standard brethren, however since this is my first Legioss toy I hope I will bring a new perspective with this review.

People familiar with the Legioss know that its most notable feature is its ability to transform for a robot into a fighter jet. The Legioss is different from its most obvious cousin, the VF-1 Valkyrie from Macross (also used in Robotech) as it is more of a robot that turns into a jet rather than a jet that turns into a robot. The Legioss has three modes: Armo-Fighter, Armor-Diver, and Armo-Soldier.

The toy comes with a few accessories that includes the Synchotron cannon, a hand to hold the cannon, two missile clusters, and three tiny Ride Armors. The extra hand simply plugs into the Synchotron cannon and then attaches to the toy's ball-jointed wrists. It is a little annoying that the toy cannot just hold the cannon with its own claws, but the extra hand keeps the weapon firmly attached to the toy so it has it's advantages. The cannon also features a removable magazine that must be detached before it can be mounted to the Armo-Fighter. The three little Ride Armors (one standing, one riding, and one collapse in box form) are a nice touch, but they are so small you will probably end up leaving them in the box. 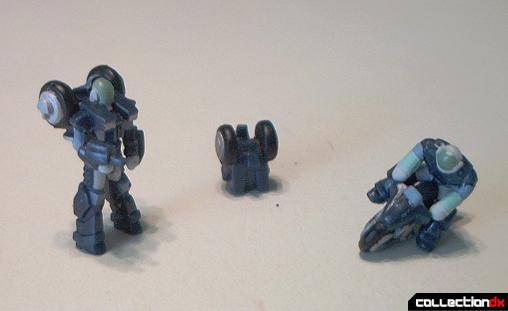 The missile clusters are a holdover from the standard Legioss and are plugged into the screw holes underneath each chest intake. Also included is a sticker sheet filled with all the standard sci-fi jet markings you could want along with the prerequisite Mospeada decals. 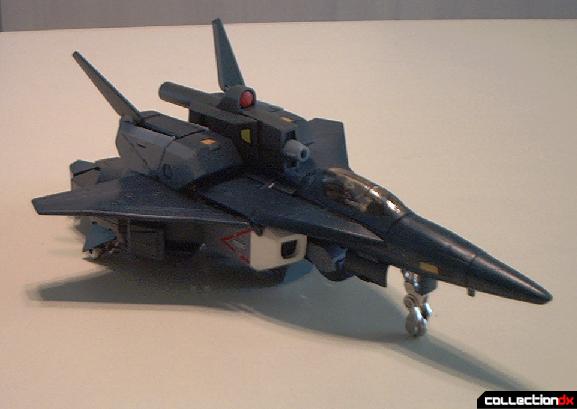 Armo-Fighter mode has always been hit or miss with the various toys made over the years. This toy has a fairly mediocre Armo-Fighter mode. The most notable deviation from the typical artwork is a bulky underside and an extra long nose. As it stands, this mode emphasizes the design's toy aesthetic with its diecast landing gear, simple panel detail, and chunky look. 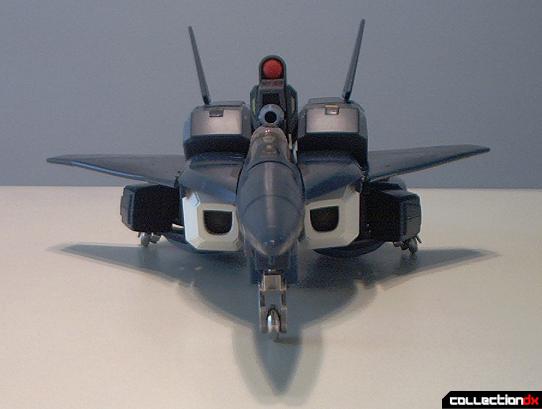 This toy features some limited tampo printing around the intakes which gives it a military jet feel. There are some unfortunate gaps, which can be seen in profile. One of the unexpected improvements over the standard Legioss is the Synchotron cannon. Because the cannon is mounted between the arms in Armo-Fighter mode, it keeps them pegged together which makes the Armo-Fighter mode very solid. It is certainly good enough to fly around the room while making, "swooshing" sounds. 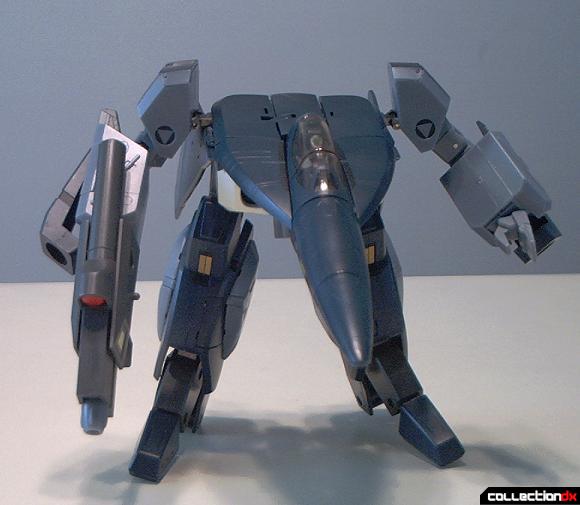 Moving on to Armo-Diver mode, it is here we can see that this mode is the weakest of the three modes. Part of the problem comes with the toy's unusual knees that allow the shins to collapse into the thighs. Ideally, they also have enough flexibility to allow the legs to attain the necessary "chicken leg" appearance. 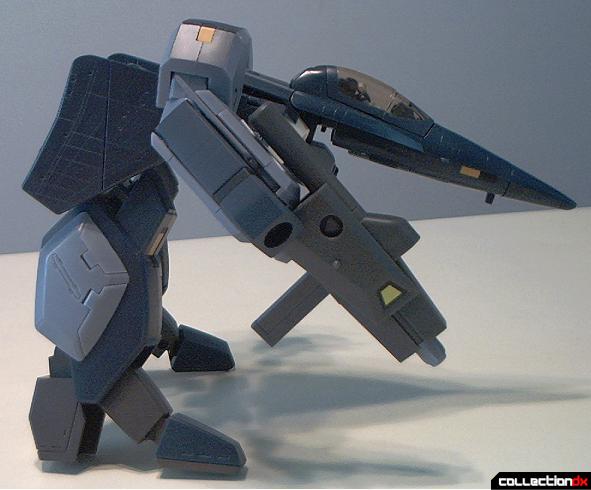 In reality it just looks like a robot bending over. Part of this is a fault in the original design, but the toy does not do much to improve the awkward stance of Armo-Diver mode. It's a far cry from a Macross style GERWALK. 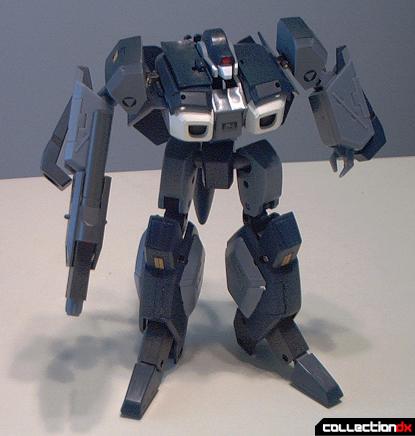 The most playable and arguably the main mode of this toy is Armo-Soldier mode. The toy is in fact packaged in this mode, which invites you to pick and play with it immediately. The "clicky" joints in its legs and hips and the diecast shoulders make the toy feel really well built. The cockpit section is also attached via a diecast hinge. This hinge was initially very tight on my toy and I had to disassemble it in order to loosen the hinge using a pair of pliers. I actually couldn't transform the toy into any other mode before loosening this hinge. Other than that, the toy really shines in Armo-Soldier mode. 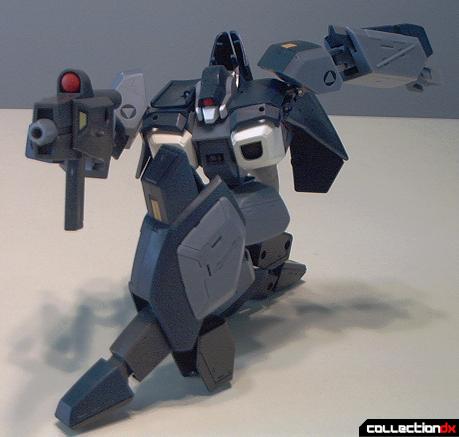 You really get the sense that the Dark Legioss is a mean looking robot with its chunky limbs and big gun. I like to say it's like a robot that went out, skinned an airplane, and now wears the hide like a cape. The toy is also covered in little panels that open up to reveal little missiles. While this is true to the original design, the execution on this toy is pretty poor overall. However, it is also a problem with the Legioss design because at the end of the day, unless those missiles are firing they look like little red dots. One thing that would have enhanced this toy would be a stand. It looks pretty good in my handmade stand, but a custom stand would probably work a lot better. 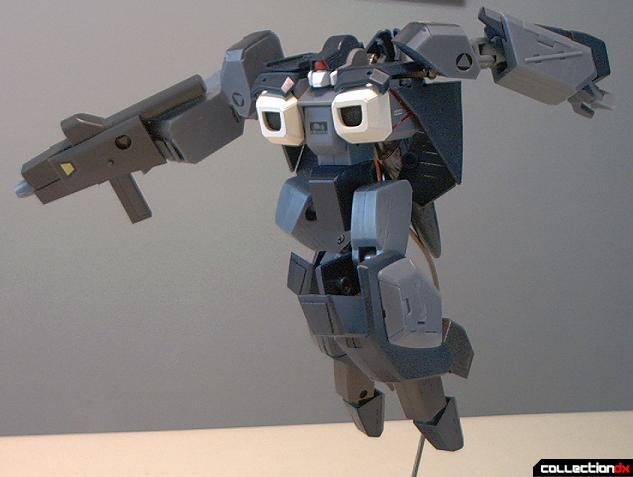 Now the biggest problem with the toy is that it costs over a hundred dollars. I hate to echo Josh's review, but the Dark Legioss costs about twice as much as it should. Mospeada itself is a low tier franchise in Japan, and the Dark Legioss is an obscure design. I imagine CM's Corporation has to set the price pretty high just to offset the toy's niche appeal. As such, I think the Dark Legioss will probably find itself in the clearance bin come the next Hobby Link Japan sale. Overall, its a pretty nice toy with an unfortunate cost.

As a bonus, here's a picture of the Dark Legioss with other 1:48 scale toys. 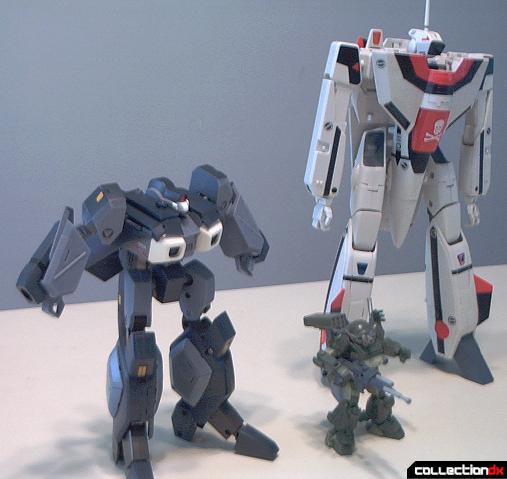 I never noticed this on the other Legiosses, but they totally have the same wings as an F-15. The nose section and the cockpit also have a very McDonell Douglas design feel to it. The LERX look pretty F/A-18 like as well.

Hello, thanks a whole lot for the review. Even though I though it was well informed, I'm afraid that I have to pass on this one. You've visually persuaded me to buy the Yamato 1/48 VF-1A instead. I would've probably grabbed one if the retail price were as favorable as the Toynami and Ashioma versions.

Just out of curiosity, will you be doing a video review version of the Dark Legioss in the near future or will you do a recap of it on your next podcast?

Also, I've noticed that Votoms Scopedog you got placed between the Legioss and the Valkyrie. Just out of curiosity, could you tell us what kind of version and scale that VOTOMS Scopedog is, and does it come with a Chirico figure to put inside the robo-tank?

BTW, that was a cool review you guys did on the Garland in 'Episode 8' last year. I know it's been long overdue like so many things, so I thought I should tell you.

Thank you for your comments. This review isn't part of DAPDX. I was toying with the idea of doing an audio portion to the review as I do not have access to a quality camera for a video review. I do have a web camera on my laptop, but I haven't found any software for video recording. In answer to your question, the Scopedog is TakaraTomy's AG-08 Scopedog Turbo Custom which is oddly enough the cheapest release of that particular figure. It is also 1:48 scale and does come with a small unpainted Chirico figure to put in the cockpit. As far as the Yamato VF-1A goes, given that it is the same price as CM's Legioss, it is a much better value. Even Yamato's new 1:60 scale VF-1 is a better value as the full set comes with the FAST pack armor set for the same price as one Legioss. That being said, CM's Legioss is the only current Legioss toy that is built to last. I have heard nothing but trouble about the Aoshima/Toynami design.

I've seen this ship on sale at HLJ and right now is at 50% discount, but even at that price is still too much to pay for it. It would had to be made from at least 70% die cast to be worth getting it.

You were right, I just picked one up on clearance from HLJ. Just like you, I had to disassemble mine to loosen that metal joint. I hated it at first, but must admit the thing is growing on me. Just out of curiosity, what is your oppinion on the toynami / aoshima version of the legioss? I know it get's a bad rap, but I love that toy. Either way, if you get a chance, could you do a review on one of those, i'd love to hear what you think about them.