Here's a little bit of trivia for you that I bet you didn't know. The full Japanese name of Dancougar is "Choju Kishin Dankuga" which translates to "Super Beast Machine God Dancouga". However, for some reason, the Japanese companies chose a different English name for the character, which is "God Bless The Machine Dancouga". Why? I have no idea. But until Yamato released Dancouga as a GN-U figure, I had no idea that it had a different name. 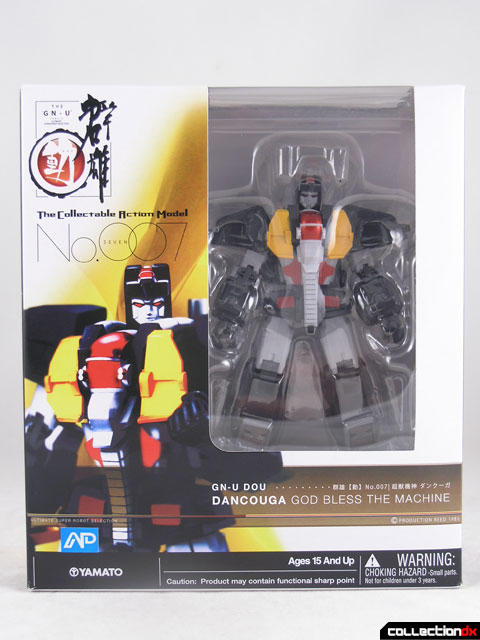 This GN-U figure adds a lot of play value into the equation, but it is still stuck with a few flaws. 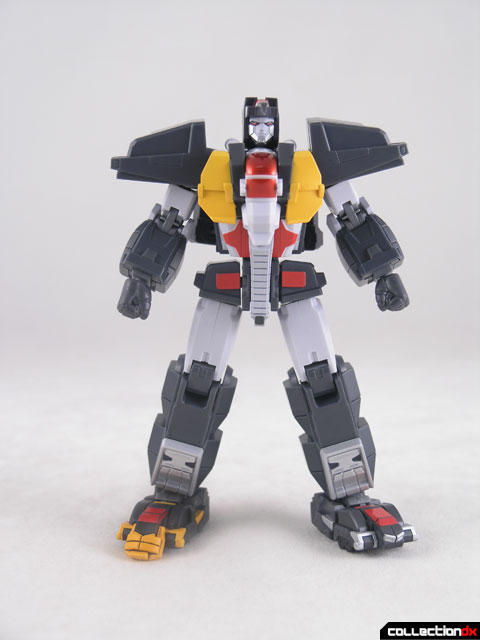 First of all, Dancouga is not transformable. The toy is typical GN-U in that it has an internal skeleton with ABS parts covering it. Dancouga's design limits the poseability, but it does well with what's available. 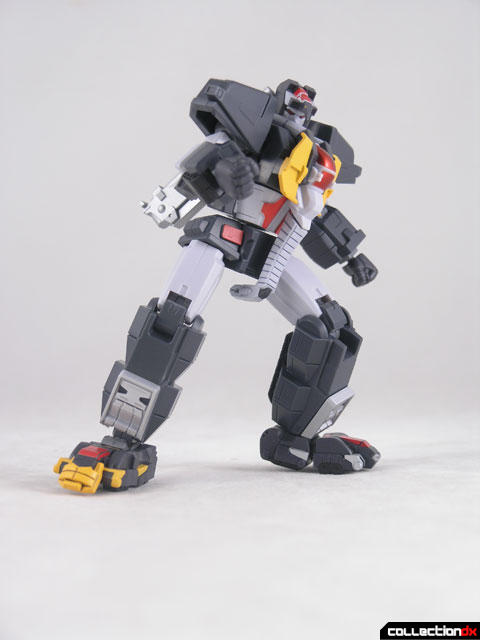 Some interesting things of note: The trunk in the front is articulated, and can move depending on the pose. 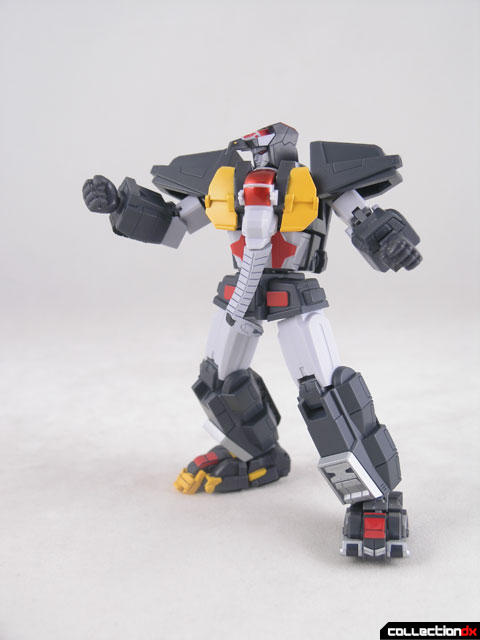 The large gun (DankuHo) on his back can unfold and be positioned over the head. and the two smaller Beam Launchers on his back can be swung around the sides near the waist. 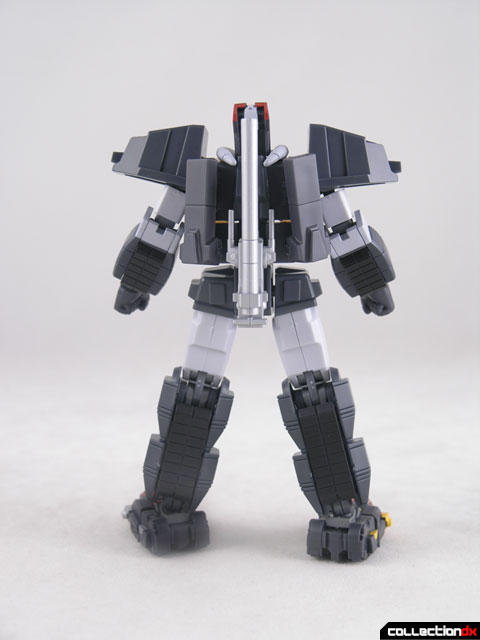 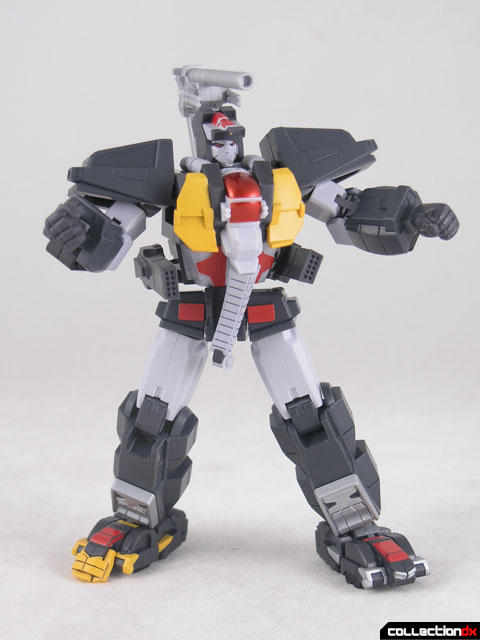 Included with Dancouga is the giant DankuKen sword, which actually comes in two pieces. Variant hands are included, including one to hold the sword. First, the hilt goes in the hand, and then the top of the sword attaches. It's big, but not as ridiculously oversized as with the SOC. 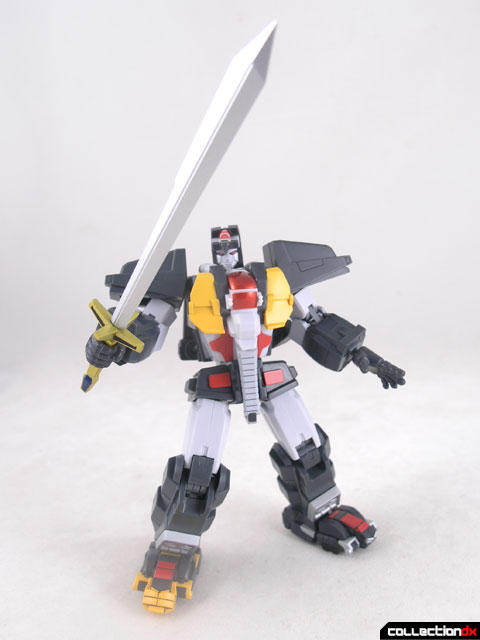 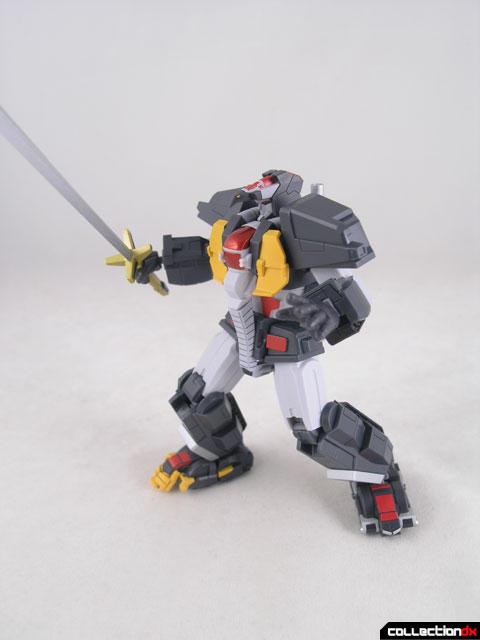 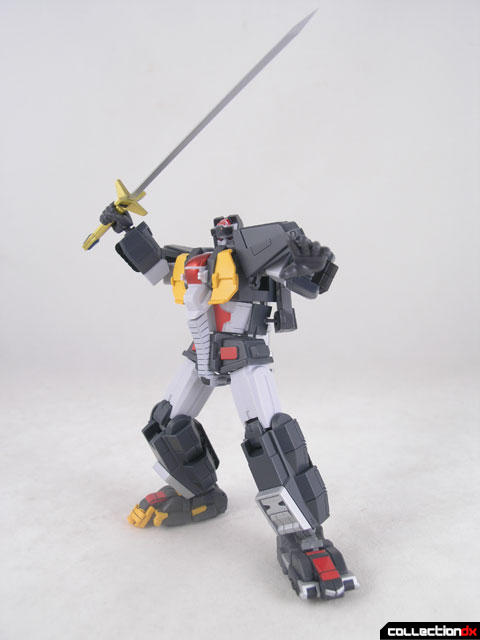 OK so I mentioned flaws. Most of the figure is really great, but the armor over the hips does not stay on at all. I'm sure a drop of superglue would keep the two halves together, but I don't see why this couldn't have been one piece. Let's not over-engineer what should be a simple toy, okay Yamato? 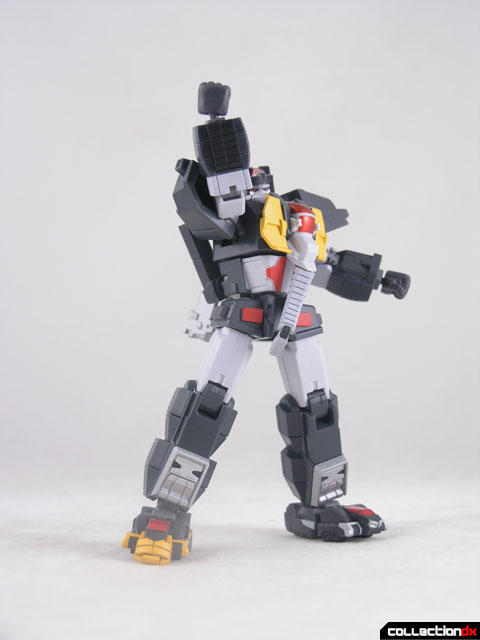 8 comments posted
Cast off the beast, and the man! Now, become a god!

I'm kind of surprised at the largeness of the sword. in both this toy and the SOC. In the actual show, its size was much more moderate.

At least, it was moderately sized for a giantic robot composed of four other gigantic robots.

I'm not a Dancouga fan, never liked the idea of that type of combination. About the name on the box. After the Tv series was finished and OVA was released by the name of God Bless Dancouga, so my guess is that this toy is based on the ova version (don't really know if it's different from the tv one).
Dancouga Nova was also announced in this line?

This review inspired me to watch the first episode of Dancouga (the original,not Nova),and now that I've seen it,my only question is why haven't the made a figure of the metal mask mohawk guy? Screw Dancouga,MMMG is where the real action is! I wonder if he's any relation to the dude in Kizuna Encounter for Neo Geo?

Saga-gx,what do you mean by "that type of combination"? What's so different between Dancouga and other combining robots?

Get this, that mohawk guy you mentioned? His name is Death Gaia.
Even his name is metal.

Because dancouga is just the elephant mech with new shoes and a hat. (and the shoes look ugly btw)

It's a pretty sharp looking hat though. ;)

And Death Gaia is one of the better names I've ever heard! I didn't catch his name during the show because I was watching it raw,and the Japanese words all just blur together for me. I should take Micheal Phelps' advice and get Rosetta Stone.

Although I have never watched the show I ordered the mecha from HobbyLink Japan and surprise surprise received it yesterday together with Baxingar. The paintwork is exquisite and I love this line of robot figures. Yamato is doing an excellent job. Can't wait for Baldios. Thanks Yamato.

unfortunately, it takes ages for toys to come here... currently ordering it, though i doubt it will hit my place any sooner than the release of GNU DOU Dancouga Nova.