Daimos is one of those characters that has been on the fans lists to be made into an SOC for some time now.

It appears Bandai has been listening, because here it is.

Daimos never aired in the US, but toys of Daimos were included in both the Godaikin and Shogun Warriors lines. In the late 90s, a compilation DVD called “Starbirds” appeared on supermarket dollar DVD racks. However, in addition to its native Japan, Daimos was popular in Philippines, Malaysia, Italy and France. 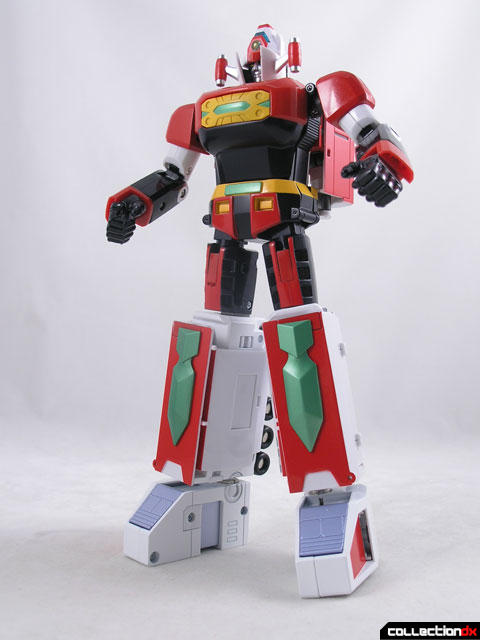 I’ll say it right now. Daimos is good. Very good. But it’s going to feel a bit odd to US fans. 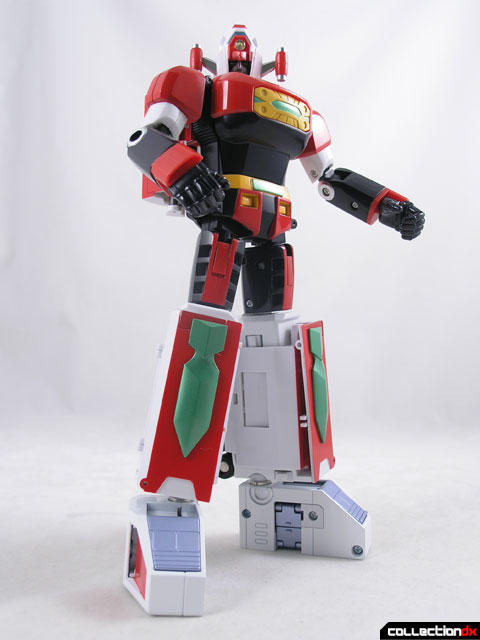 First off – the box is the typical SOC quality. Nice graphics, nice packaging. The toy itself is packed in a Styrofoam tray while the accessories are in the clear plastic trays.

Inside, Daimos is ready to go in robot form. 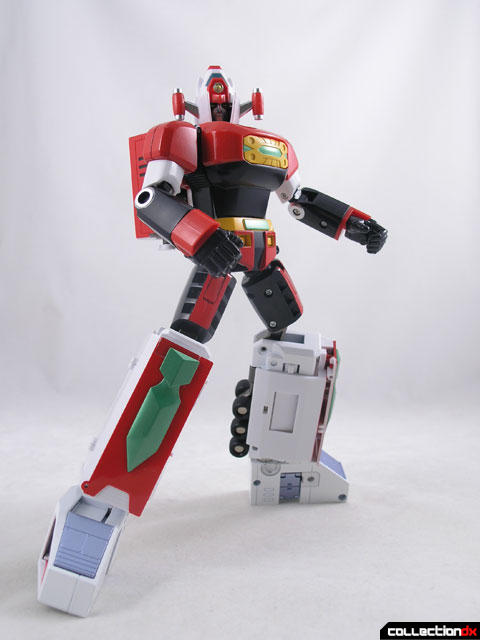 Daimos, in robot mode, is really fantastic. Articulation is great. The head moves, the arms have a dual joint that allows a wide range of motion, even up over the head. Its very nice. The elbows have a double joint and the wrists turn in two places. 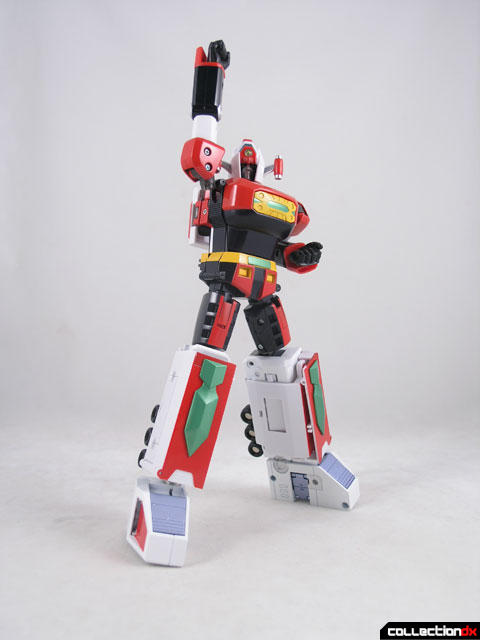 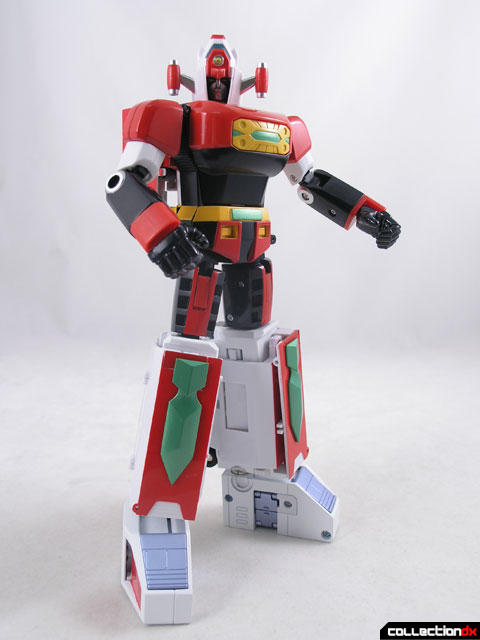 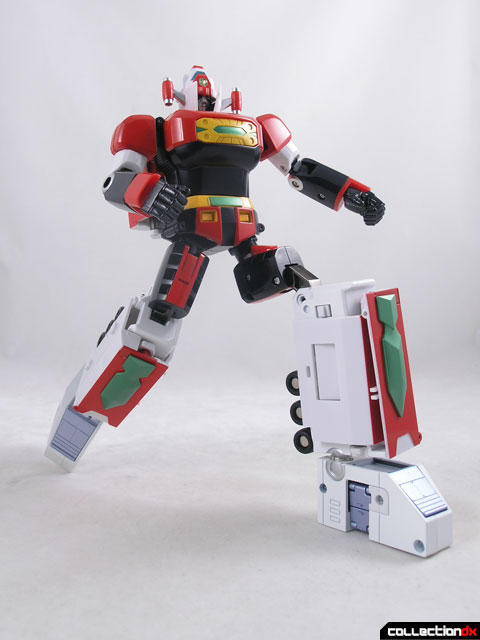 As for metal content, Daimos is loaded with metal, In fact, he is heavier than the original DX chogokin. Chest, shoulders, legs, connectors… Metal.

In Robot mode, Daimos has the usual ton of accessories. 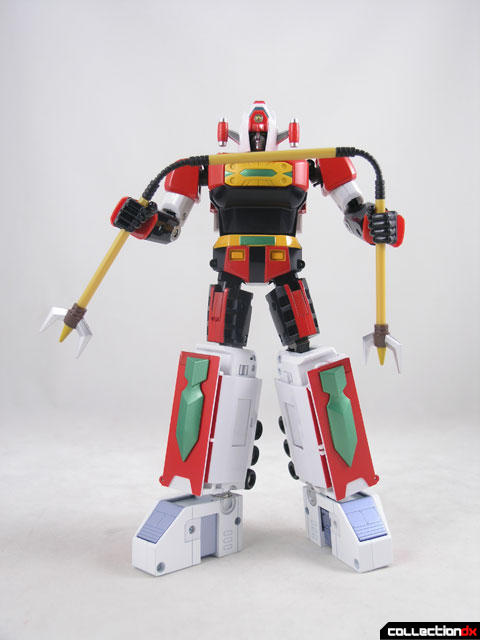 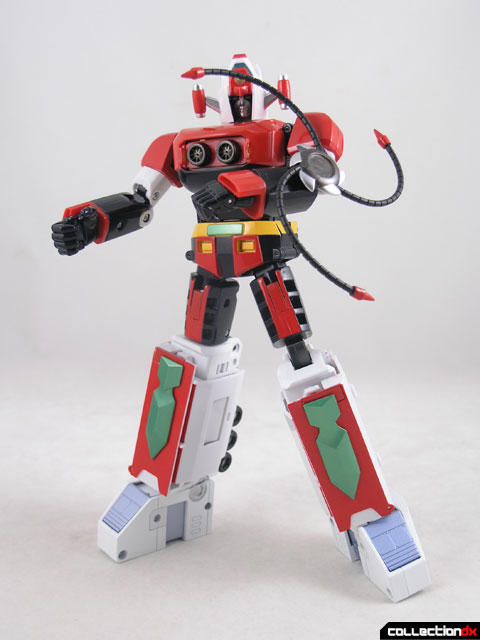 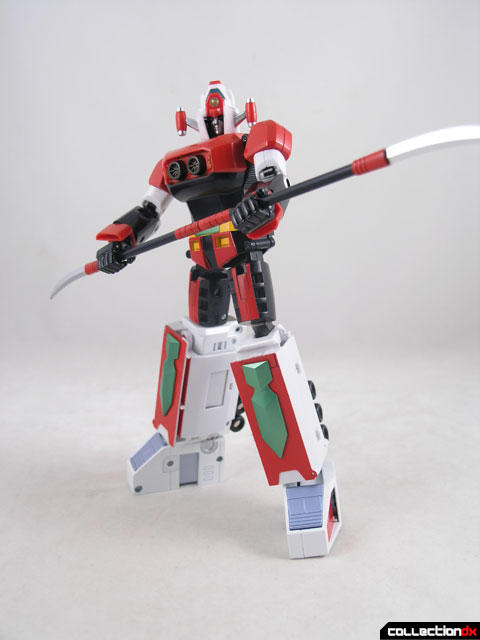 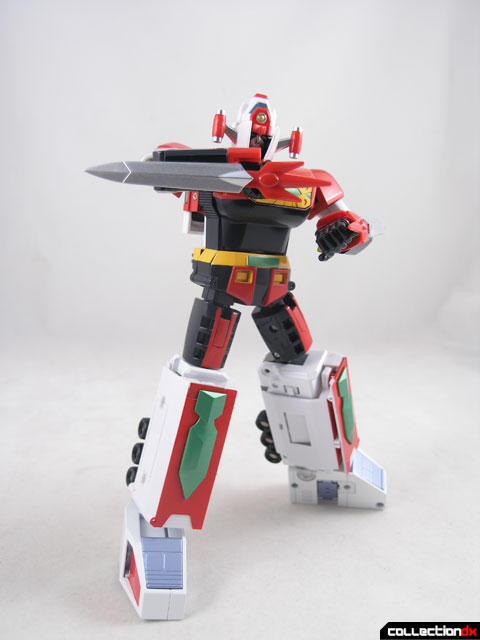 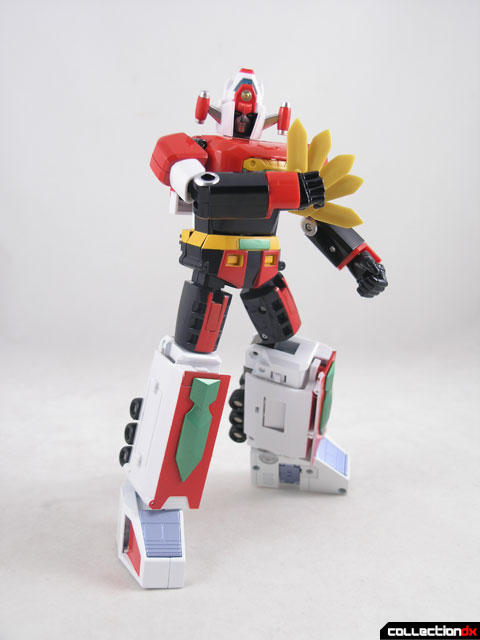 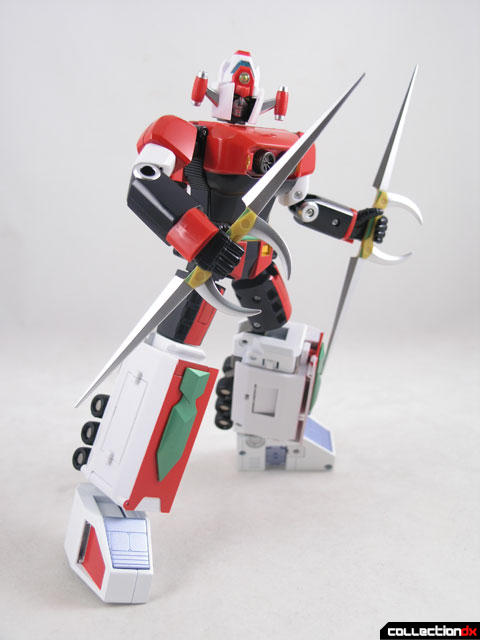 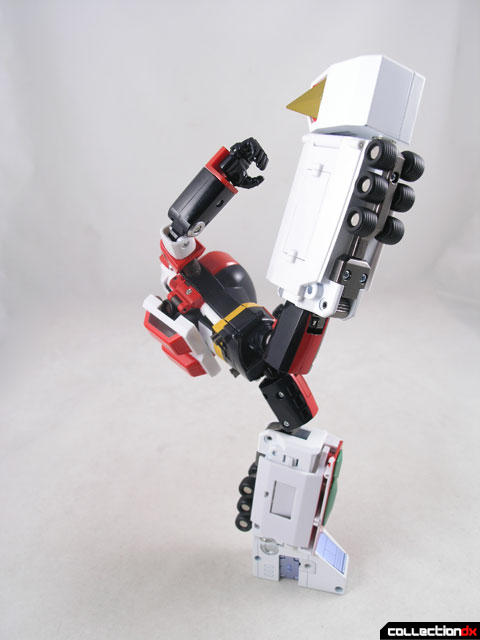 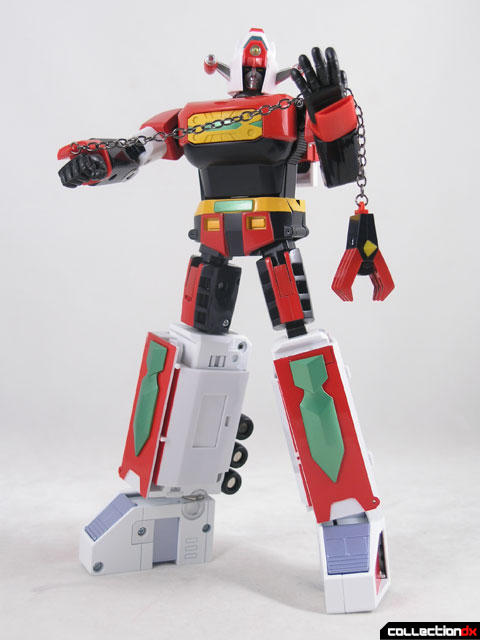 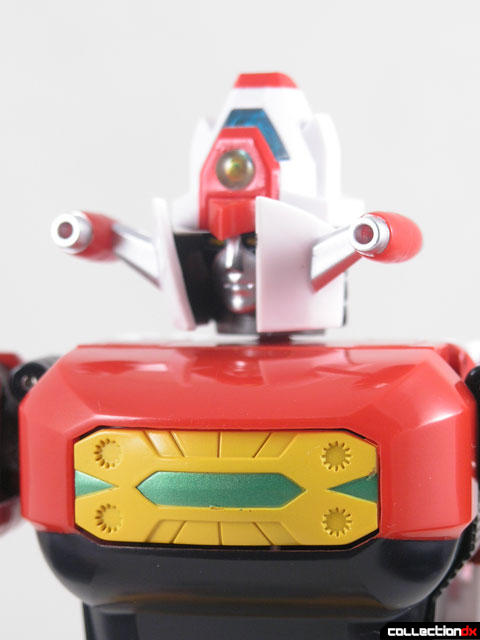 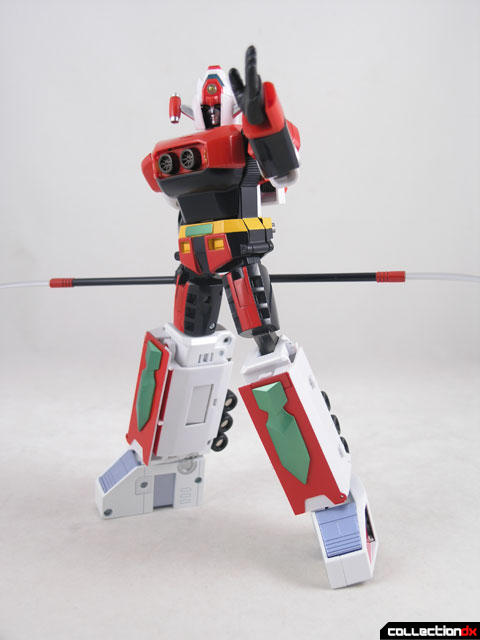 Transformation from robot mode to vehicle mode (or Tranzer) isn’t really difficult, but there are a few odd areas and a few issues of contention.

For one, Daimos kind of cheats on the transformation. The Tranzer cab actually is stored in the chest and swaps out with the head, instead of just transforming from one to the other.

The arms fold down along the chest and store in near the legs as opposed to the chest.

Also, included are two different sets of back coverings. One set is fully transformable, and the other is an anime-accurate set. You need to have the transformable set on to go into vehicle mode. 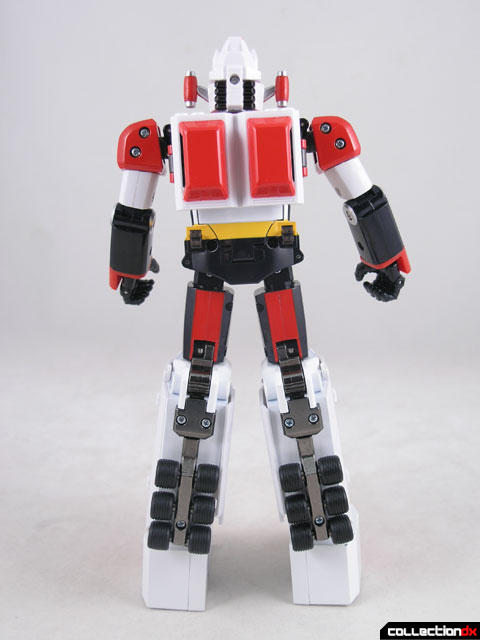 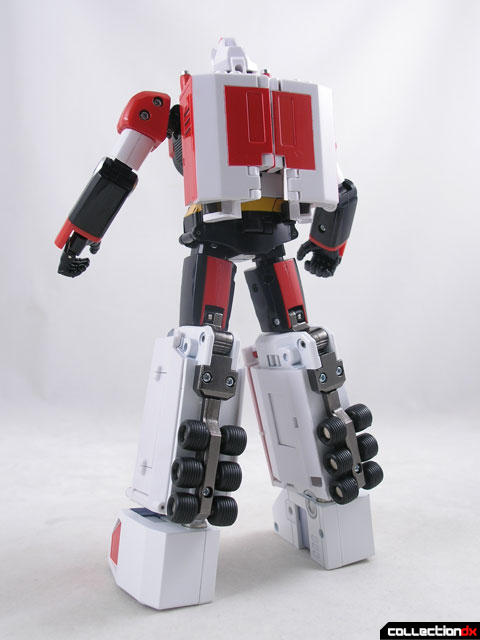 Watch the video to see the transformation in action.

In vehicle mode, Daimos is a brick. It’s just a solid inarticulate piece. Unlike the vintage piece, the cab does not move on this version. The tires are a hard rubber, and do turn. 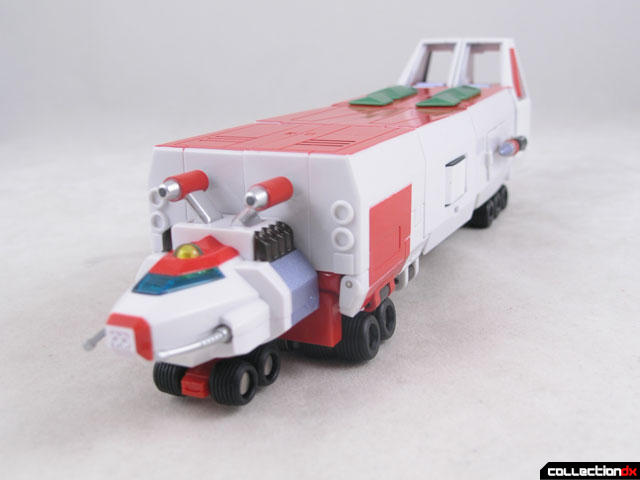 Missiles can be attached to the rear sections of the Tranzer. Also, the rear of the trailer has a door that opens that allows the miniature Tryper 75S to dock inside. Two mini-Tryper are included – one just in car mode, and one with wings open. 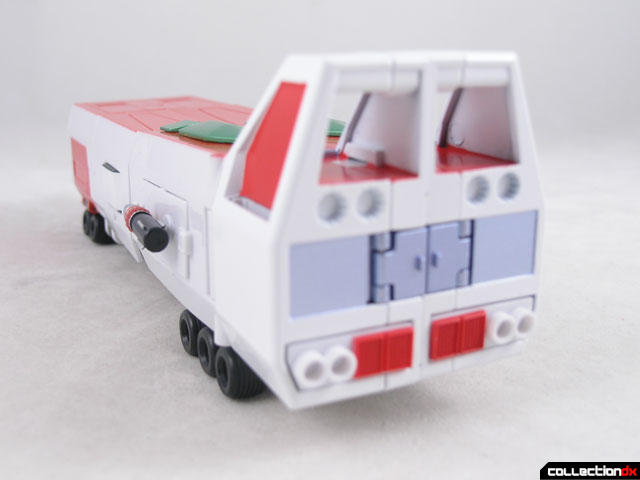 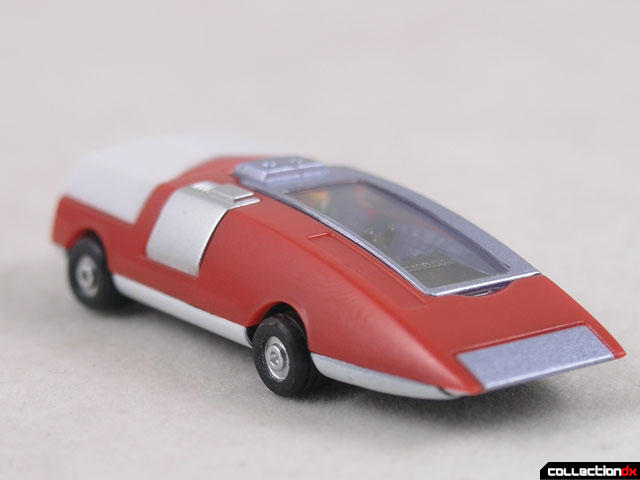 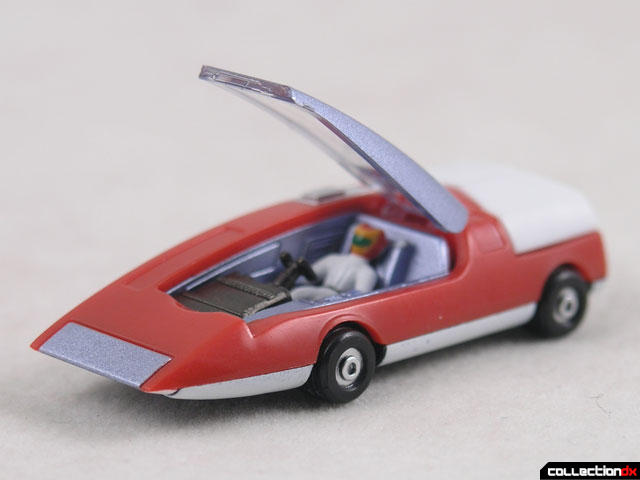 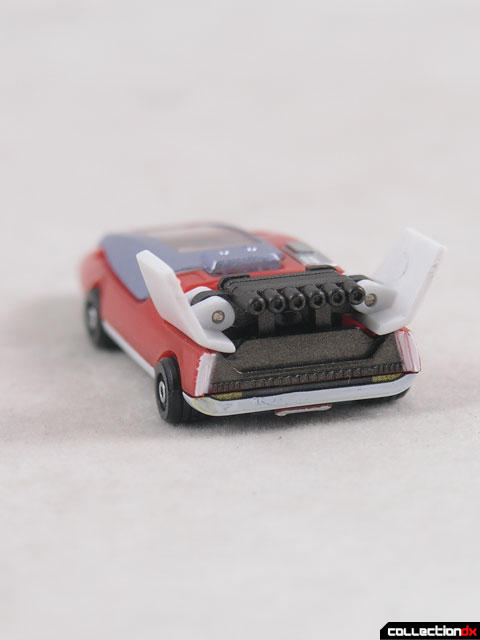 A stand is included that holds all the weapons, but honestly, we didn’t put it together. In fact, it seems that lately we just leave the extra parts and stand in the box, and just display the figure with the accessories we like most. We just don’t have the room anymore. 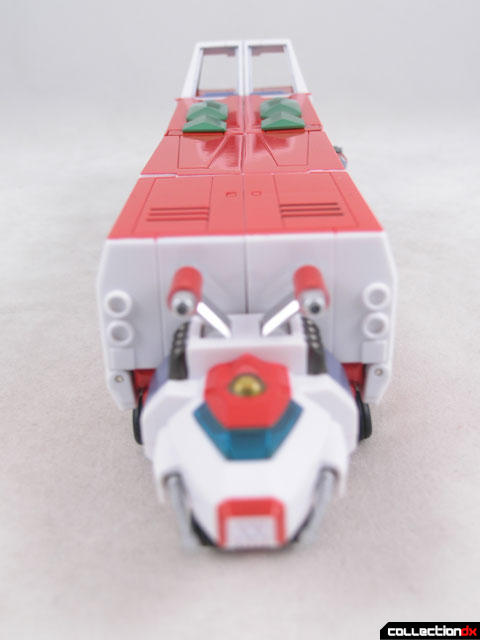 If you are a fan of the old DX chogokin Daimos, this toy may leave you a little cold. The transformation seems needlessly complex, the colors seem all wrong, and despite having more accessories, the new version doesn’t actually do much. It’s less fun but more anime-accurate.

However, there is hope. With the recent announcement of the “Respect for Volt-In-Box” set, the Soul of Chogokin colored like the old popy DX set, there is the hope that Bandai will continue to re-issue SOC in classic chogokin colors. And to add a bit more evidence to this – the green shin guards on Daimos are only painted green. That’s right; they are actually molded in yellow – the color of the guards on the original DX chogokin.

GX-43 turned out to be exactly what I expected. I really like it, lots of die-cast. Just awesome.


Incidentally, Daimos did indeed get aired in the states, albeit in condensed form. In 1982 there was a "movie" version with the meat of the series all crunched together in one flick(about 90 minutes or so if memory serves), much like the Force Five "movies/compilations". The Daimos "movie" was shown in 1982 on Showtime along with all of the Force Five "movies". Showtime was great for showing that cool stuff when they first started out.


Now I am eagerly waiting for Yamato's Danguard Ace to hit the states, he was always my favorite as a kid.

How in the world did you manage to open the Tryper?! With a microscope and tweezers? In any case, that's a very cool toy, always love seeing diecast.

Did the DX Chogokin Daimos ever got sold in the USA as part of the Shogun Warriors toyline? If not, did Mattel ever had plans to do so I wonder?

The DX Daimos was sold as part of Bandai America's Godaikin line in the US.

Great review, yet some pictures need a serious tune-up, especially those when you use the lower knee joint, which looks awful. But other than that, everything is nicely done.

... Why is Daimos so friggin small? He looks like he's just a bit taller than a TF Deluxe...

He's not that small. Just a tiny bit smaller than a movie leader class figure, if you want to compare to TF toys.

He can stand on one foot!?

I never cared for the Karate fighting robot Daimos, and this toy does nothing to change that. The joints on the legs look bad, it offers very little gimmicks, and it's just too expensive for what it offers compared to other SoCs in the same price range.

That new Volts is causing a big stir in the collector community. I'm not buying any SoC proper now for fear of a better "Respect" version coming later, and I think quite a few are doing the same.

Bandai (or somebody working for them) should drop a hint to how far they are going to take the Respect idea. Is it a whole new line to sell old molds with new gimmicks, or is it going to be for new releases as well as an alternate version?

Great review. I have to agree, the leg joints are poor looking and take away from a nice looking robot. I have noticed that a lot of SOC toys have very poor leg articulation compared to Transformers, Gundam etc. As much as I like this and hope they release a Big Dai-X in the line in the near future (if they do I will buy a few), I wonder is the SOC toys really worth their price as even their larger toys are small compared to Transformers and are fragile. I owned GE-10 and GX-01R and in my opinion they were a waste of money. Large robots like Daimos shoud be at least 12" high or bigger and be durable.

Great review as usual. If you guys are interested on how it fares with the SOC Voltes and Combattler in size see this thread.

Do not go for cheapness. Don't even think of the price, just decide which you prefer and buy it...I found that sometimes when you go for the cheaper option, when presented with 2 options, you resent it as you keep thinking of the other and not appreciating what you have. Both robots are very cool which ever you choose will be good but after reading this review...as much as I like Daimos and have never seen the cartoon of Zambot 3 just the S.O.C....I would go for Zambot 3.

Well, I think the size of GX-43 is just right compared to all other SOCs
I think Bandai did a good job of maintaining the super robot sizes that they have created
in reference to the anime
(Mazinger is smaller than Daimos, Daimos is smaller than Voltes V, etc...)
Well you know what I mean Ü

I have to admit I like GX-43 as it is right but I am trying hard to stop my self
from purchasing now in fear or in the hopes that a GX-43R might suddenly
pop-up in the future... it's such a pain in my heart and pocket to see better versions
showing up after I've purchased something....sigh

I put this one off for so long and man that was a big mistake. Although I have been relatively happy with each new figure I pick up (some more than others), I have only been this overjoyed a couple of times. Once when I held my 1st SoC Great Mazinger (blew me away) and again when I picked up Ideon (could not believe how big it was.) A modest collection later and starting to have trouble finding figures I like (and can afford)...my focus turned to Daimos.

Daimos is a joy to pose with the ability to pull off tons of unbelievable dynamic stances for such a large heavy diecast robot. He also has a beautiful assortment of very cool weapons to go along with him. You love Kung Fu stuff? Daimos is THE kung fu robot. Sounds silly, but he looks like he can easily totally trash every single robot on my display shelf and be smiling the whole time he did it.

The colors didn't bother me one bit. I had the jumbo when I was a kid and I am fine with the blue face gone (always looked like a paint error to me) and the nice touch of white and green (which you can see in some of the above pics, green has a bit of a different texture to it than the other colors.)

I had a general idea of how big he was going to be, but it is always different when you get that toy in your hand and pop him on the shelf. A really nice size, well worth what I paid for it.

I guess it is all what you like to do with these toys. To me, Iron Gear is a big hunk of metal that doesn't do much of anything besides turn into a ship.
With Daimos, I can spend an endless amount of time playing around with him and all the weapons.
Thank you Daimos for being soooooo cool!