At some point in the early 90's I would lurk around Outer Limits here in my hometown looking for new robots and anime. I happened upon Patlabor stuff and got into it for a while. Built some Bandai kits and watched the series. More recently I started buying Patlabor stuff when I realized CM's Corp had released some awesome new Brave Gokins. As you may or may not know, I have a soft spot in my diecast heart for CM's Corporation's releases. Some are merely "meh" but some are just plain awesome. On the awesome side of the spectrum are their Ingram releases. A "Labor" which is the name given to these huge mechs humans have built for industrial type labor. Unfortunately, like all electrical and computerized things, they tend to go haywire on their own through lack of maintenance, viruses or through the direct action of the person behind the wheel of this giant mech. To control the mayhem, there are Patlabors which is simply a shortened version of "Patrol Labor".

This specific release is based on the Reactive Armor Version.

This set was provided by the great people of HLJ.com!

It seems people shy away from this specific release because it lacks the light gimmicks of the other releases and the armor lends to a more "plain" look. That is not to say that it lacks as a solid release, it's just not everyone's cup of tea. For those that have overlooked this release, take the time to check out the rest of the review. We are going to start off my review as I usually do, which is to show the box. Its a thin cardboard small box design that follows the style of other releases. To some, the box is a tad misleading due to it showing 3 different Ingrams on the box. Unfortunately, it only comes with one body. 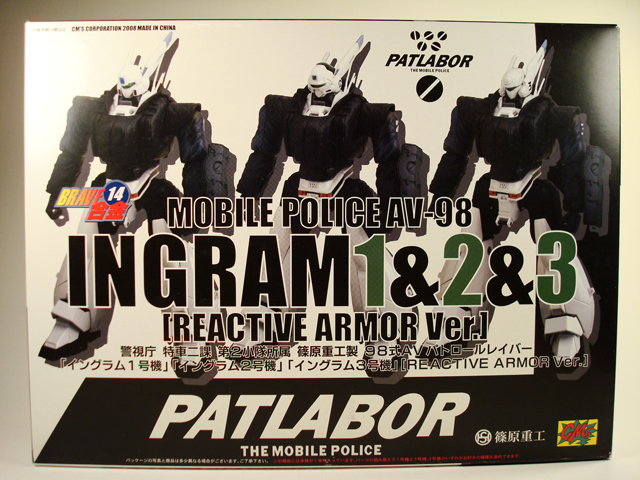 Once you remove the innards from the box, you find a thick brick of cardboard. Will pulling out a huge brick of styrofoam ever get boring? NO. Plain and simple. Removing the stryo flap, we find the Ingram wrapped in a plastic sheet with styro blocks securing him in his travels to his destination. 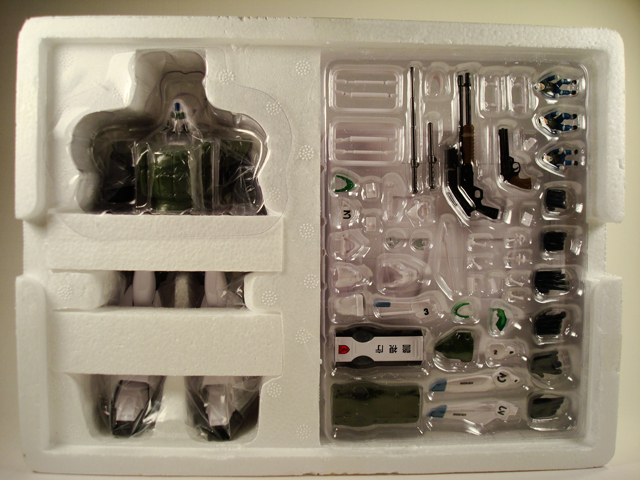 On the right side of the Ingram is a plastic tray full of VERY tiny pieces and his accessories. 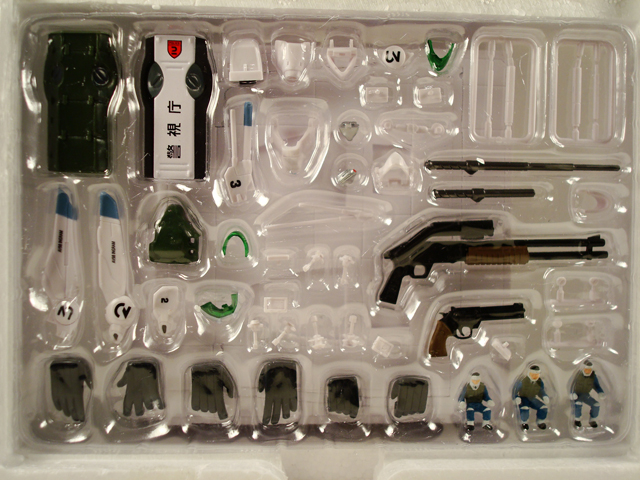 Once you pull the Ingram out, you will find the standard head is Ingram 1. At first glance he is rather bland looking since most of the pretty white paint is hidden by the dark green colors of his armor. 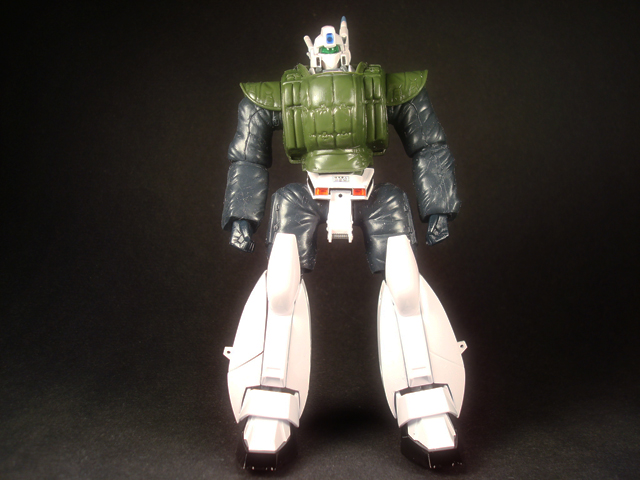 From the back it is no more exciting than the front. 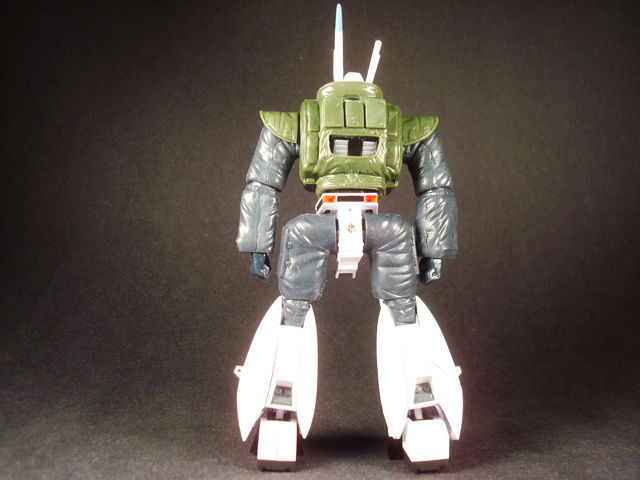 The set comes with decals and parts allowing you to complete the Ingram of your choice. Here is a scan of the decals. 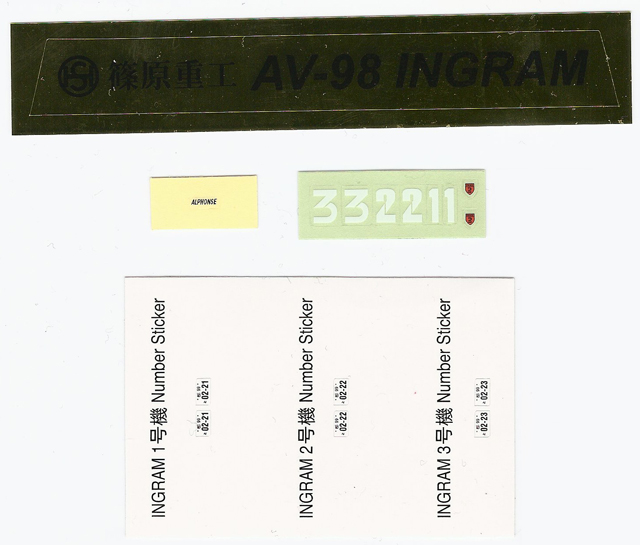 Aside from the decals, you get all three Ingram heads. Heads 2 and 3 have to be assembled. A bit fiddly to assemble if you have big fingers. 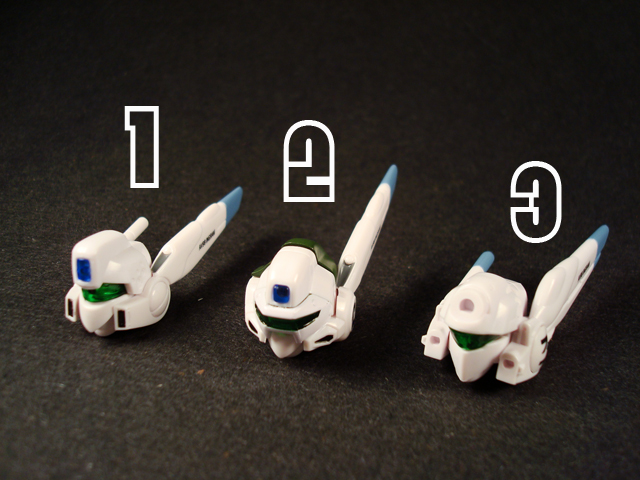 Here is a close up of the standard #1 head that comes attached right out of the box. Peep the optics behind the green glass. Nice effect. 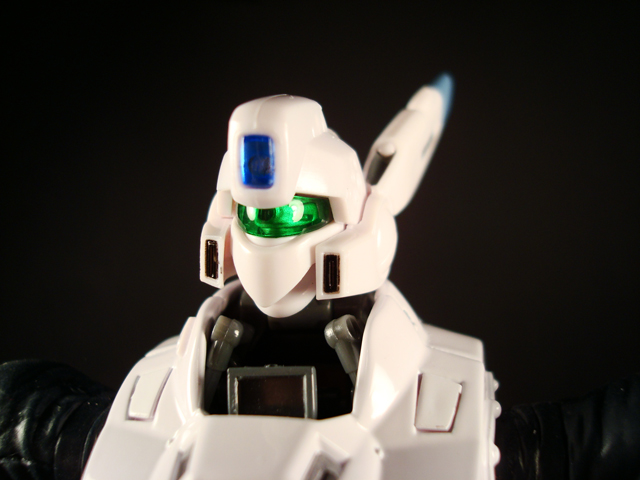 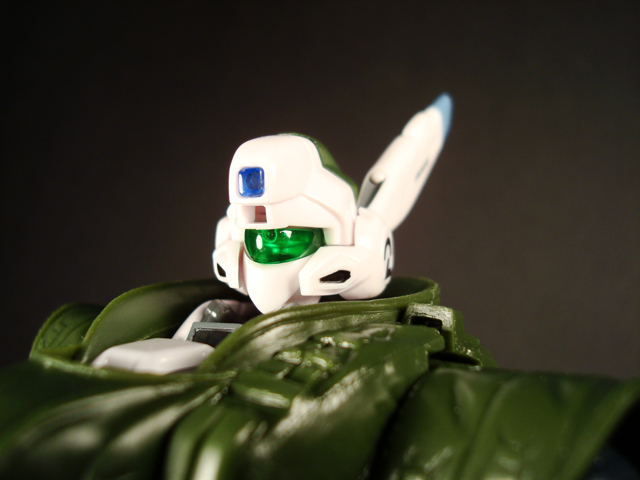 Here is the #2 head with visor. 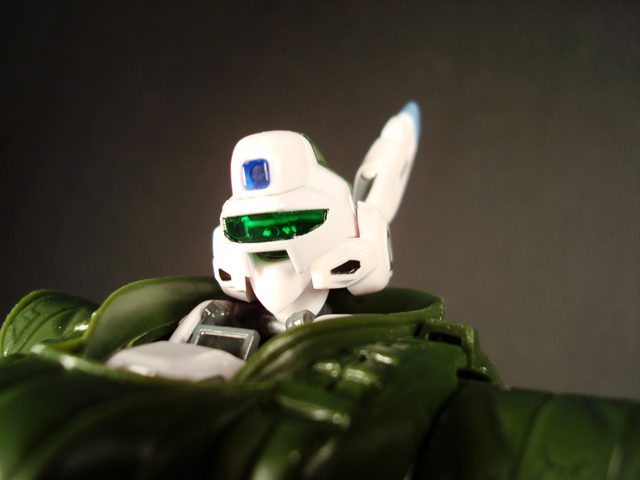 Here is head #3 in standard form on left and with optional parts on right.

Time for a strip tease. Here I've removed the soft green plastic armor to reveal his chest. It is the exact chest as the standard Ingram. Here you can see that the entire rubber arm sleeves. 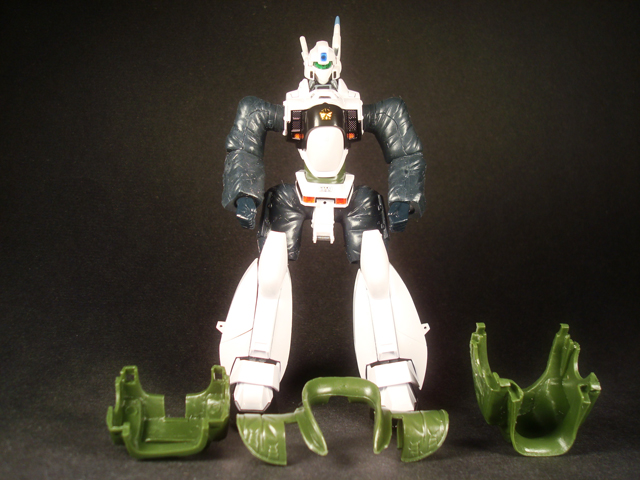 The sleeves are made of a really soft and stretchy rubber that is tacky to the touch. They are a 2 piece design which is divided at the elbows. The upper half overlaps the bottom half so that the arm skeleton doesn't peek through. The skeleton of the arms are all plastic. 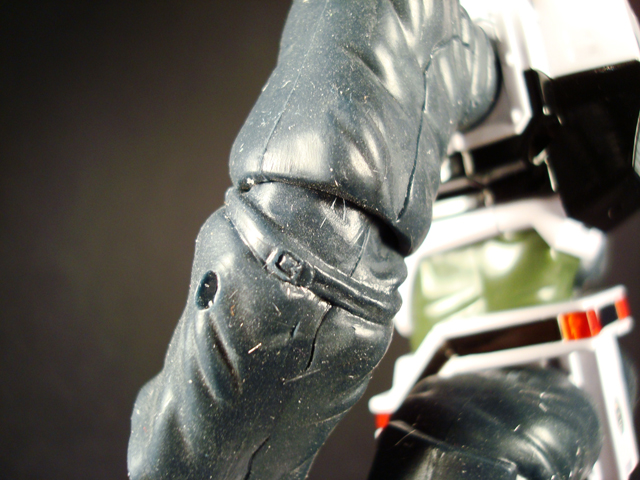 If we remove the rubber of his legs to one side, you will see the skeleton of his legs which are on a metal ball joint. 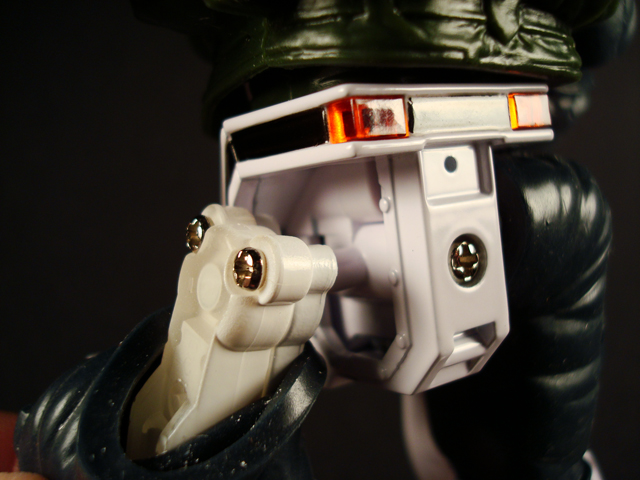 While messing around with this figure I came across a neat detail in his ankles. Pistons! Unfortunately, they are non functional on this figure, but a very welcome detail. 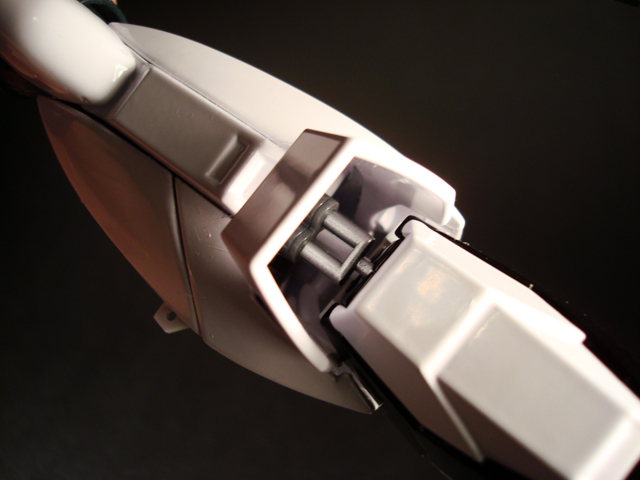 Another cool feature is the two piece feet. The heels are separate from the front half as to allow some more foot articulation.

Now that he is naked, we'll take the time to removed his back pack cover which reveals his elevator gimmick for the pilots. If you have a keen eye, you'll notice there is a round design to the back with a small slot underneath. This is where the button battery and micro switch reside in the Ingrams with light up shoulders. 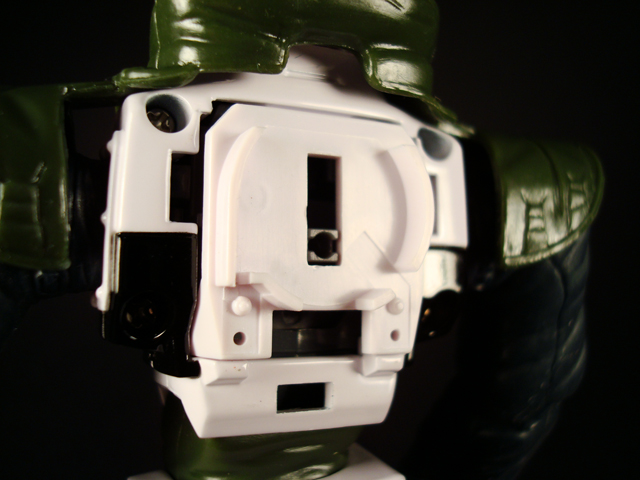 The set comes with 3 "pilots" who are police officers who ride inside the Patlabors Ingrams. There is a short guy, medium guy and tall guy. Their names escape me since I haven't watched the anime in like... forever. 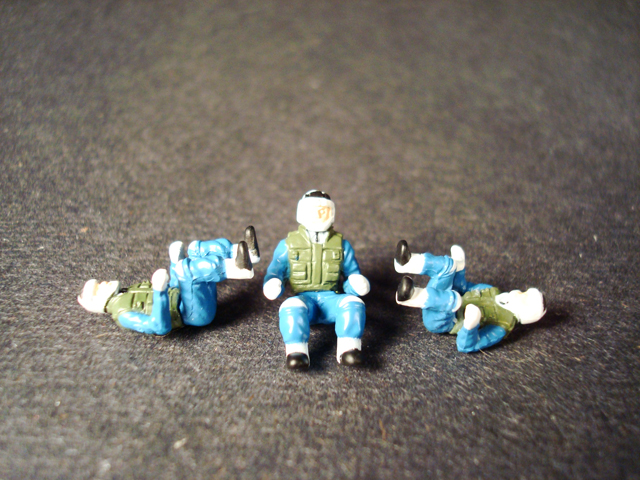 To get them into the Ingram, open the front chest which is very nicely engineered and work the seated pilot into his seat. Again, if you have fat fingers, you may find yourself using bad words. He fits but you kind of have to drop him in and hope he lands sitting down. Once he is sitting down, you will grab the metal pick included with the set and place it into the elevator tab and pull to the upmost position. (For this photo, I used the baton accessory, but using the metal pick works best) 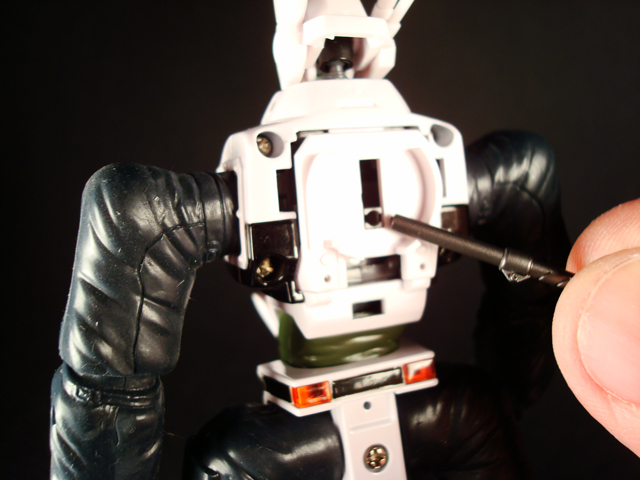 You can see how he goes up in this photo.

If you did this right, your little police officer should be peeking somewhat through the "windshield" of his Patlabor. 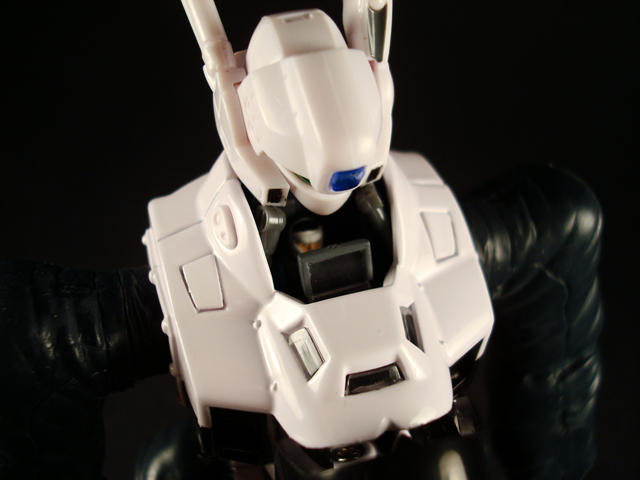 Let's move on to some of his accessories and gimmicks. As some of you may know, he has a hidden compartment in his leg... 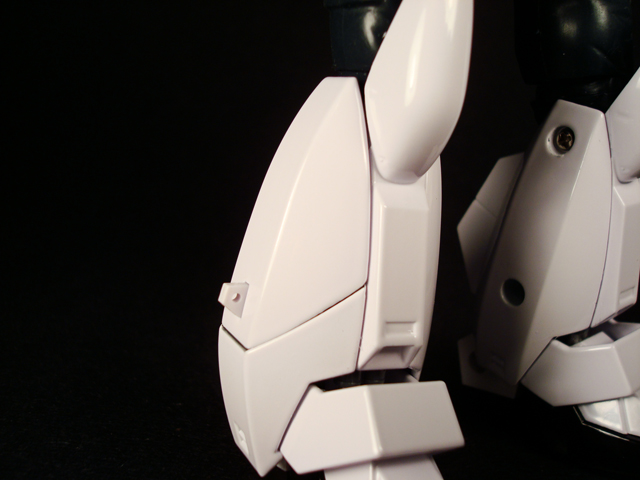 Which reveals his pistol. Notice his extended reach so he can grab the pistol. More on that later. 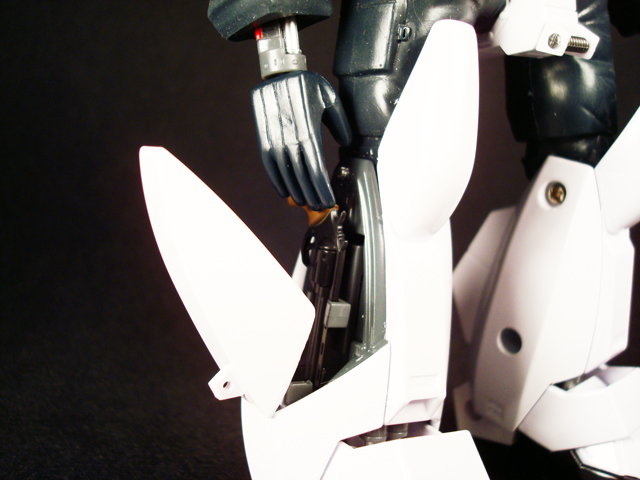 Now, sometimes if Labors get out of hand and get to be too much to handle with a pistol, you need to bring out the big guns. The butt on the gun also unfolds which is really cool.

The arm does not extend a whole lot, maybe about a 1/2" at most.

While not my favorite weapon, the baton is a must have for any Policeman.. or Patlabor. There is a short version, and the extended baton version. The baton does not actually telescope out.

Last, but not least, are the shields. The one on the left is the Reactive Armor Version shield which is made of the same material as the green part of the armor. The standard issue shield on the right is nicely detailed and the best part is that it is actually made of diecast. Very cool indeed. 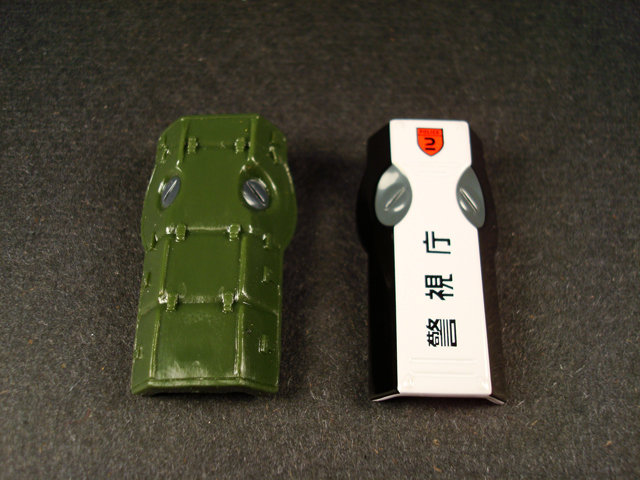 CM's was generous with their hands. It's a nice plastic that isn't hard, but is not too soft either. Its just pliable enough to attach his weapons comfortably to his alternate weapon-hands. 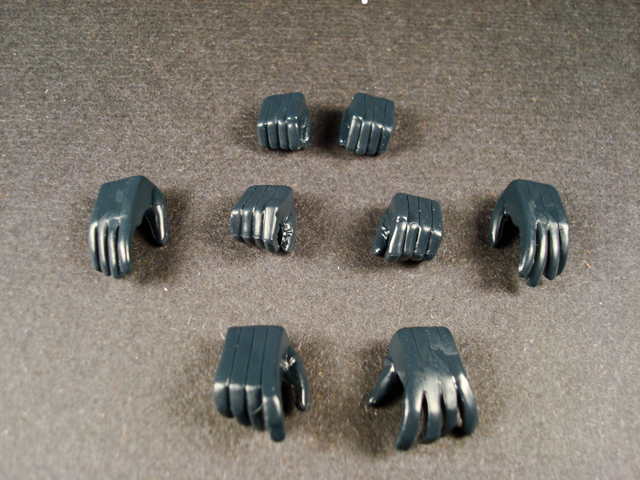 To round off the set, there is an included base. You can tell they used the hangar base sans hangar because they filled in the space where the hangar slots into with a piece of plastic. The base looks a tad too big for a figure of this size. Including the hangar set would have gone a long way into making it display better. Set comes with a gold foil decal to apply on the front of the base. 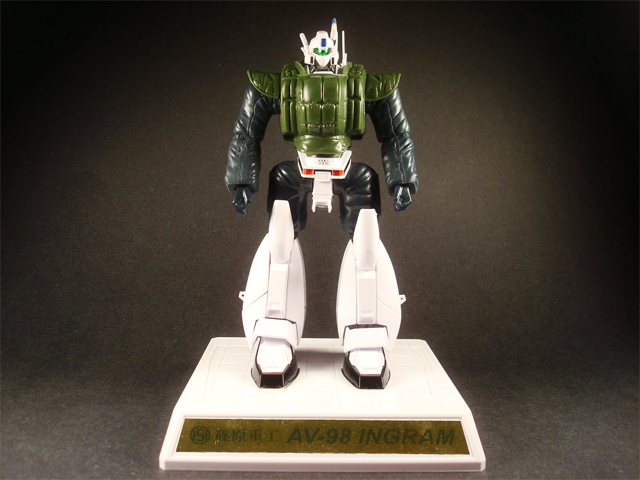 So what about diecast content? The figure is almost entirely diecast. Almost because the arms, head, cockpit hatch, arms, and heels are plastic. The rest of the body, hips legs, leg armor and front half of feet are diecast. This lends to a pretty hefty feel on a relatively small figure. 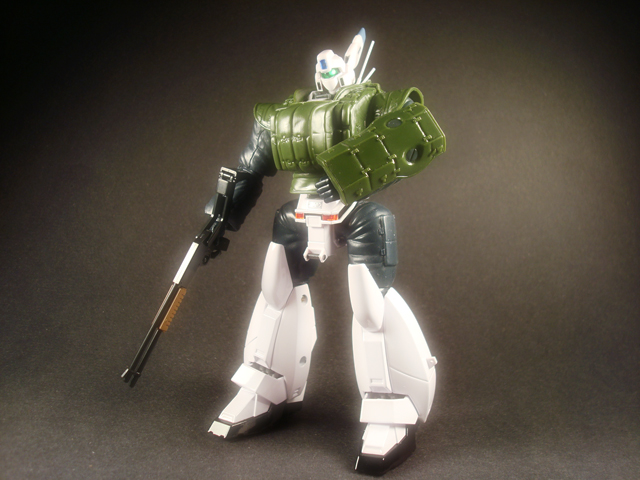 I know I haven't touched on articulation in the written part of this review, but please make sure to watch the video below where I explore articulation and show you some stuff that is not readily apparent in this review. In closing, how do I feel about this release? In my opinion, I wasn't so keen on getting this release for the same reason most everyone else skipped on this set. It was boring looking and lacked a police light-bar feature on the shoulders. On top of that, it costs the same as the other Brave Gokin Ingrams which have shoulder lights and a hanger base. However, since I've had the pleasure of reviewing this, I have to say, I like it. The armor has kind of grown on me and it looks pretty tough in the pictures. Besides it's basically the same as the standard Ingram gokins which have gotten great reviews. Need a good reason to get one? HLJ.com has them marked down REAL low along with some of the other Ingrams so you may wanna pop on over if you dug what you saw here. Make sure to check out the video below.

That was me, and yeah, while I absolutely ADORE my CM's Ingrams (some of the better modern gokins, I feel), the Jacket Armor version gave me fits with the rubber sleeving. It dried and cracked after, oh, maybe 6-8 months of owning the figure and having it on my shelf. Fortunately it's got a nice leather-clad look now :D

All of the Ingrams are worth getting, but the rubber sleeving is something worth being wary of with this particular release.

I am going to keep an eye on this one and update the review if it deteriorates over the months. I wonder who else experienced this. I'm sure this example sat on a shelf for months at warehouses etc and its fine. It may just be a matter of being displayed and room temps, humidity, playtime and whatnot that determines rubber life. Even if it happens, Quinjester has an easy fix that even looks better.