The ARX-8 Laevatein comes from the Manga / Anime Full Metal Panic! (フルメタル・パニック!) and is brought to you by HobbyLink Japan

I don't know the first thing about it. I've never seen the show, but I know a cool mecha design when I see one. This particular mecha is an "Arm Slave", a mechanized combat unit that is piloted by a human named Sousuke Sagara. The ARX-8 Laevatein is a Fourth-Generation Arm Slave, and while it has not yet appeared in Anime, it has appeared in the recent novel. Not quite a Super Robot, the Laevatein comes in at 9 meters tall (about 29.5 feet).

Laevatein, incidentally, is the name of a mythical Norse weapon.

The 59th release in the Revoltech line is the biggest, with the biggest box and the most accessories. Kaiyodo and Katsuhisa Yamaguchi are on the top of their game, making smart use of Revoltech joints and a ton of accessories. 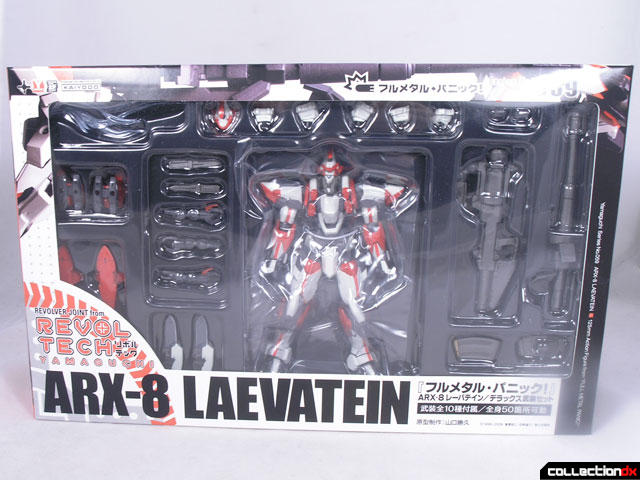 First, lets start with the Laevatein itself. This is a sleek fighting machine, with lots of joints and fantastic detail. 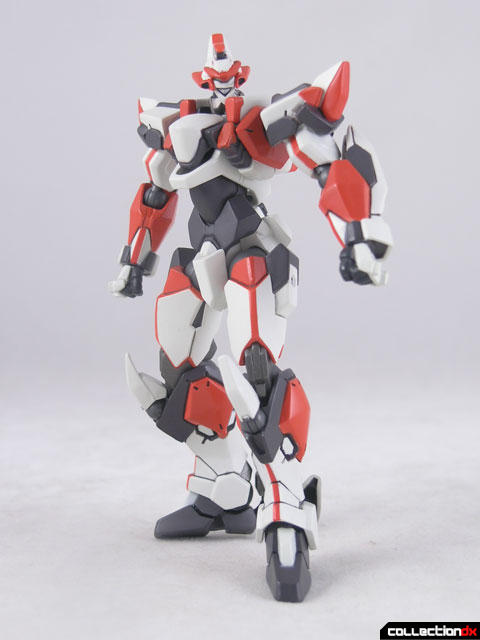 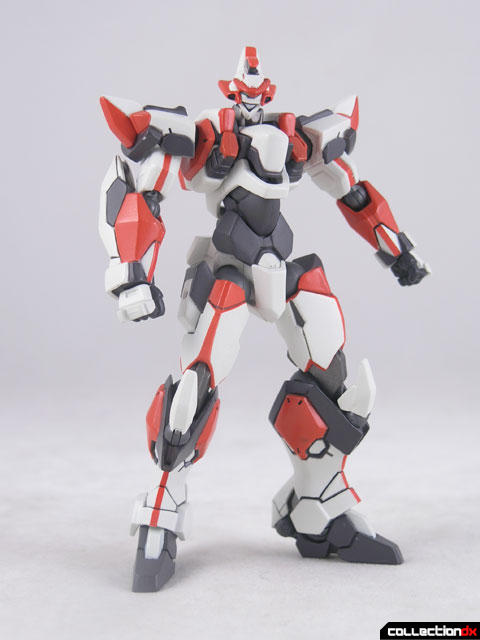 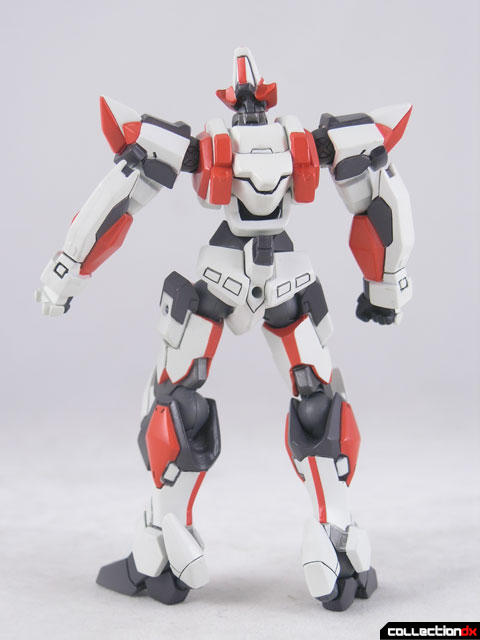 Articulation on this thing is fantastic - it was just made to move. The core figure contains 17 Revoltech joints, with over 50 points of articulation. 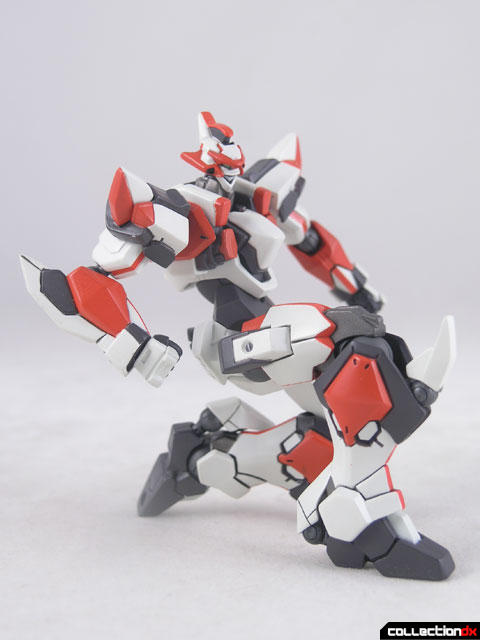 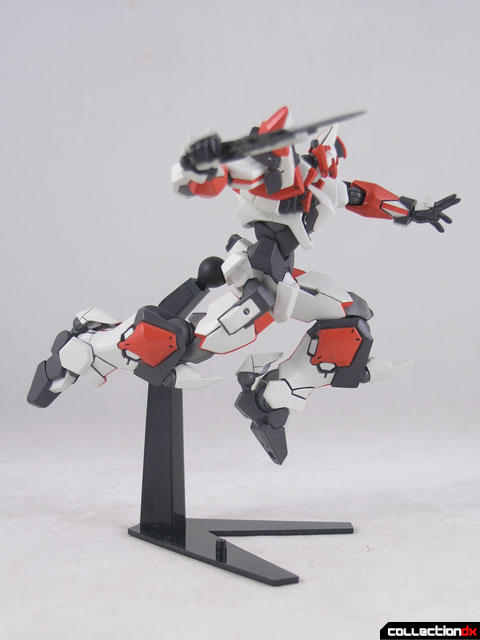 There are so many accessories included with this figure - let's start from the top. There are 5 optional hands, in various poses. Two of the hands are sized to hold the large blades called "monomolecular cutters". 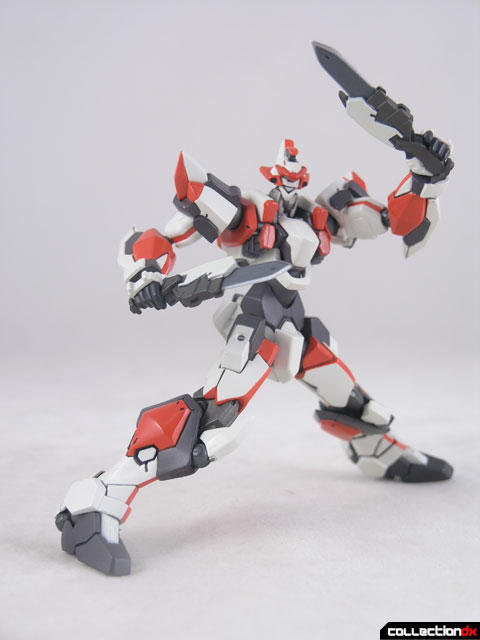 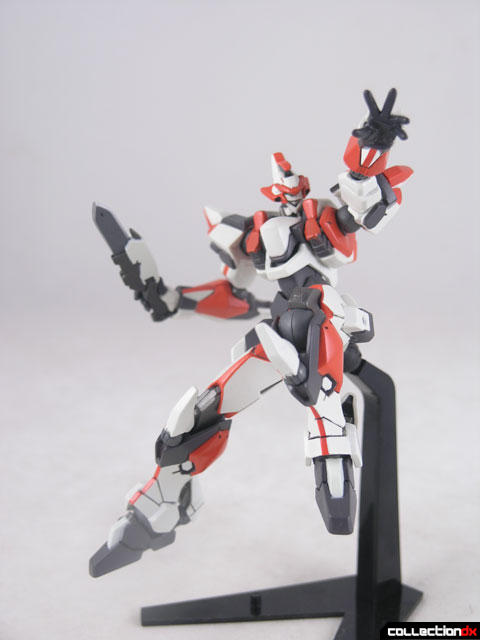 Included are two parts that represent when the monomolecular cutters are engaged, but not extended: 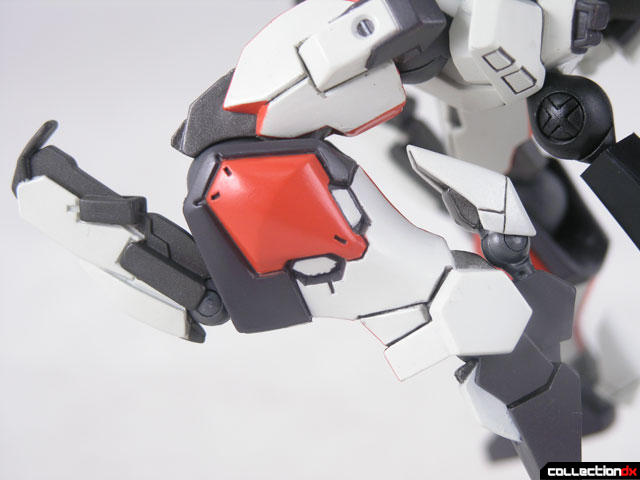 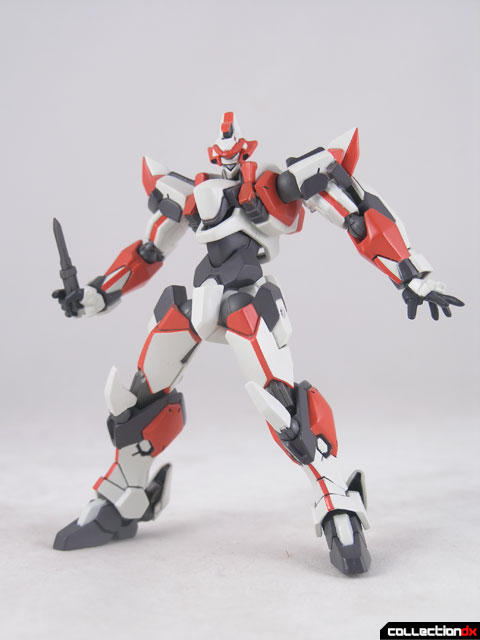 A shotgun called the "76mm shot canon" can be held by the gun-holding hands. 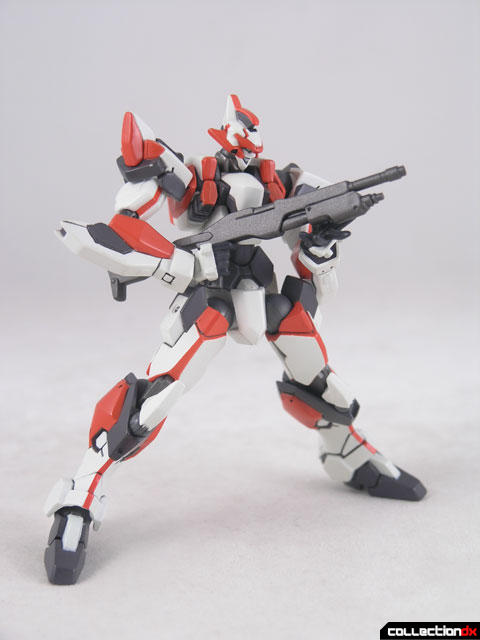 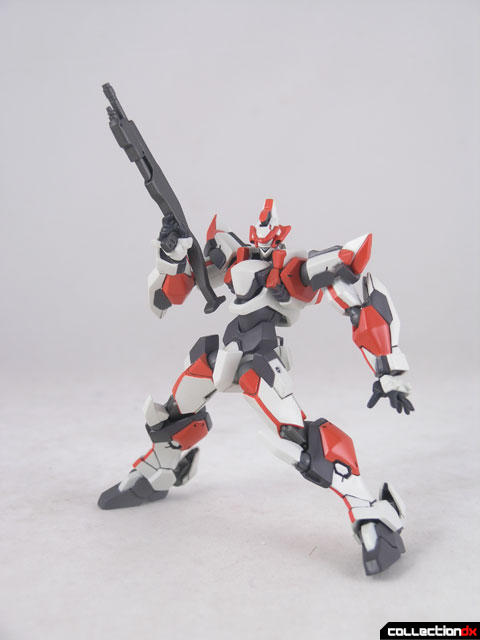 On the chest there are two panels that can be removed and replaced with robotic arms (including even more Revoltech joints). These arms can hold the included "AS-grenades". 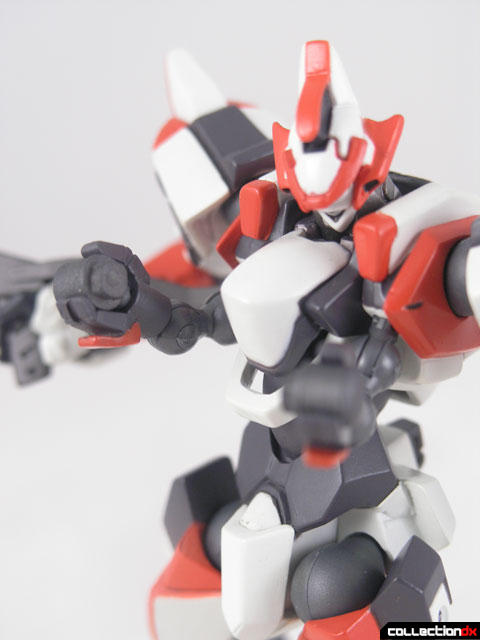 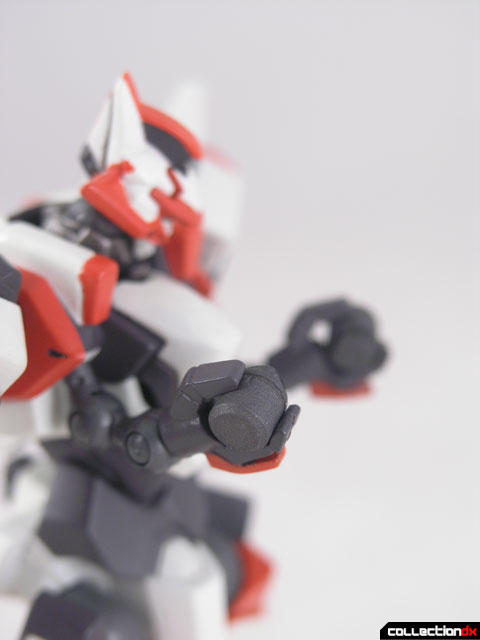 This would already be a generous amount of accessories for a Revoltech figure, but we are not done yet....

The ARX-8 Laevatein comes with an enormous gun called the "Demolition Gun". The gun itself is 6.5 inches long and is actually made out of several components. The main 165mm demolition gun has a removable base and barrel, which can be replaced with the Gun-Howitzer Mode attachment. The rear of the demolition gun has two removable gun magazines, and a dual Revoltech joint that anchors the gun to the shoulder. 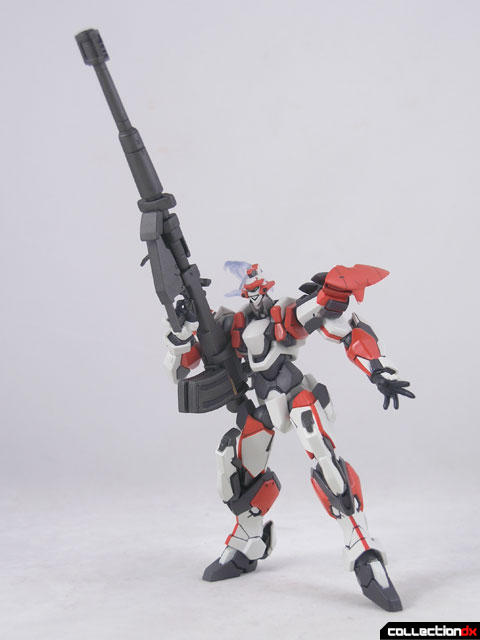 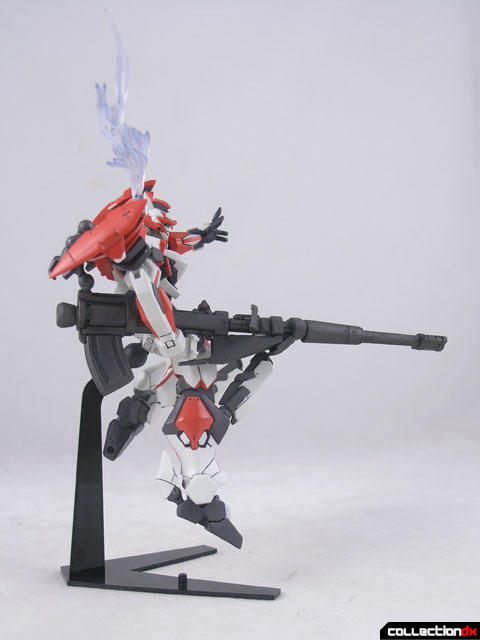 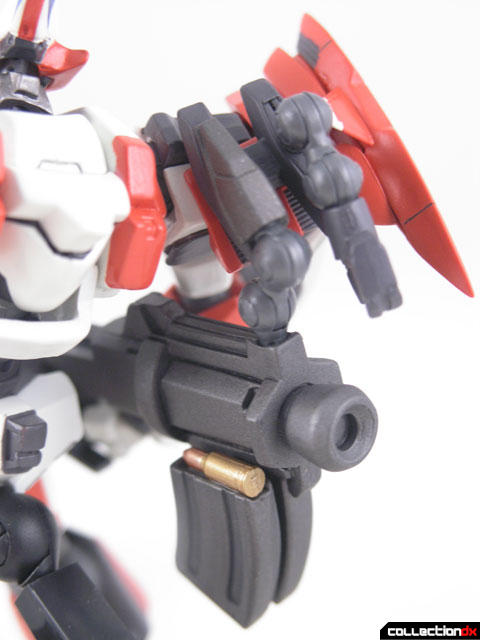 To support the Demolition Gun there are extra shoulder parts called "Lamda Driver Cancelers". These attachments attempt to cancel out the extra force generated by the use of the gun. 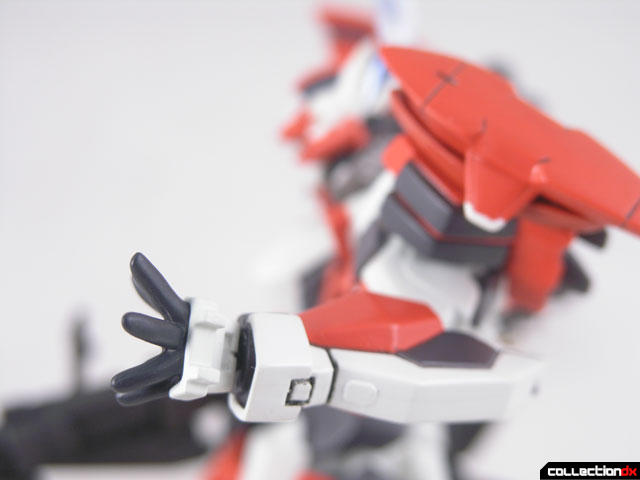 To cool the unit, the Laevatein has cooling wires that extend from the back of the head. This effect is achieved by including a different head with a hair-like attachment: 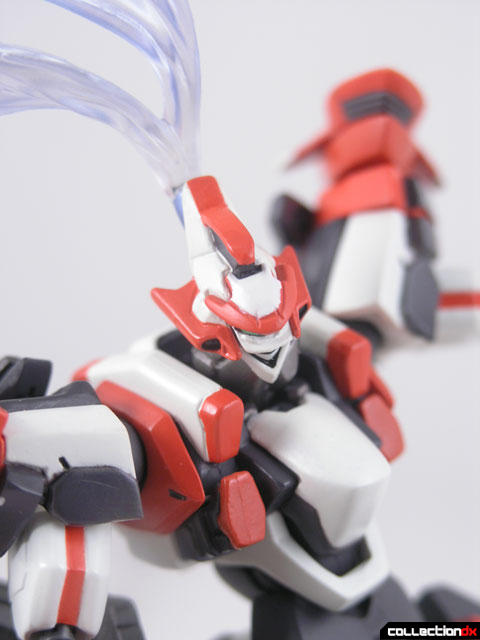 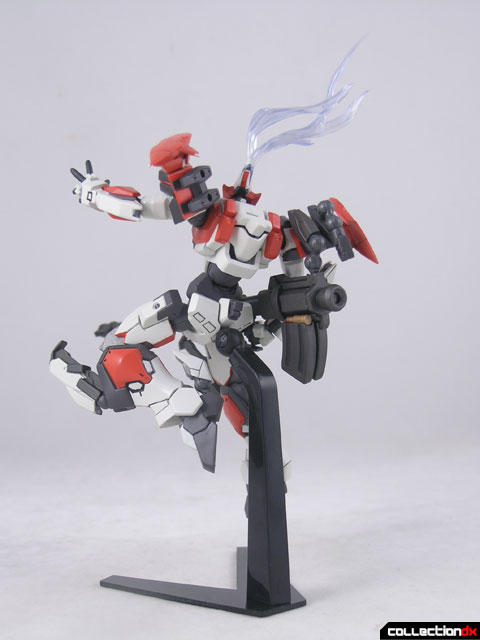 When the Demolition gun is not in use, it can be stored behind the shoulder by another robotic arm attachment (which has more Revoltech joints) 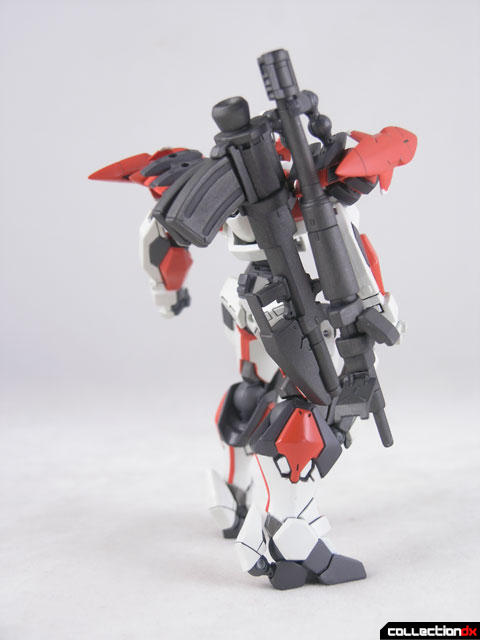 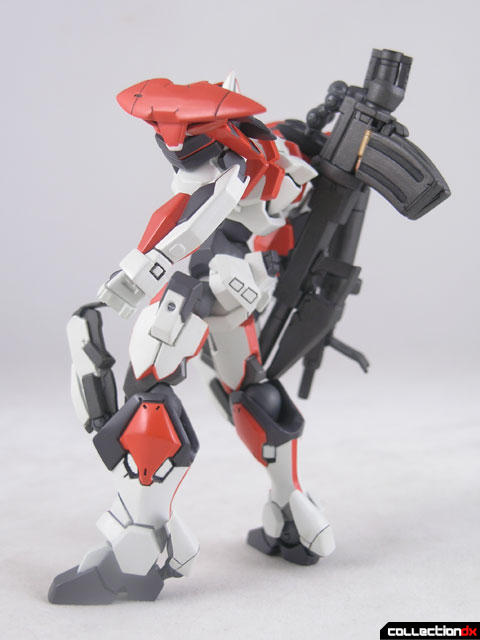 With all the accessories on, this is one badass mech. It's just phenomenal in so many ways. 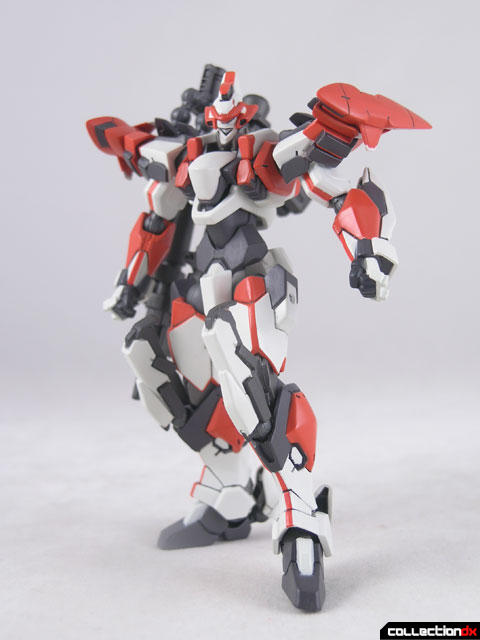 Definitely go order one now from HobbyLink Japan, while there are some still left. It's really fantastic.

I was incredibly close to buying this off of HLJ along with my Genesic Gao Gai Gar, but then I forgot about it for a while. Now I am lusting after it all over again. Great review!

somewhat more pricey than the usual revoltech line. but i think all the extra accessories in a bigger window box really paid off. currently ordering it from my local toystore supplier. the usual blackmarket thingy.

Has make me into buying my first revoltech... I always like the mecha from FMP... but now Kaiyodo had made it really beautiful.

Looks great. Hope he shows up in Season 3/4 depending on whether you count Fumoffu.
Lots of accessories, and it even looks dynamic just standing.

I want to ask is this the best Articulated revoltech so far? is it better than gurren lagann in terms of Articulation?

I think its better. There's more things that move on this one.

Then......THIS GUY IS MY NEXT TARGET!! Thanks for the advice.

One thing worth noting is that, according to the official Revoltech website, this release is part of a new "DX" category of Revoltech figures that, due to the higher price point, come with much more accessories that the stand Revvie. This is the second DX Revvie, the first being the Yotsuba Summer Vacation version. The best part of this for me was that HLJ sold this (at least when I paid for it) at the regular 1995 yen price point.

This guy is amazing
What I hate is tha I feel ripped off by kayodo. The increase in price for this figure is not related to the ammount of accesories provided. I mean, it should be at least as expensive as one and a half revoltech. I mean, the price it's awsome, but what about all the others revoltech I bought that have almost no accesorie and where just a few dollars cheaper?

Well, to be fair, you didn't have to buy them.

Actually, as heavily articulated as this guy is, Bandai will release this on their Robot Damashii line. I'm kind of holding out for that one.

ooo i am a sucker for accesories, about that price difference. i managed to pre-order this guy from bbts for $20. that was yesterday.

I've never seen anything this beautiful in the entire galaxy - okay, give me the bomb

Bah, having a REAL hard time deciding on this or the Kenshiro Revoltech...gotta hit my local anime stores and see what they got in stock first