The VF-0S represents the Macross franchise's first foray into the world of prequels. Designed for the 20th anniversary production, Macross Zero, the VF-0S serves as the predecessor to the iconic VF-1. Yamato toys originally planned to make a 1/100 scale type toy of the VF-0S. The prototype was very similar to Bandai's VF100 line in terms of execution. Yamato quickly dropped this idea and instead released a 1/60 scale perfect transformation VF-0S toy. This toy would cement the 1/60 scale line as Yamato's mainstay of Macross products. This particular VF-0S is the one released in conjunction with the QF-2200D Ghost accessory set. 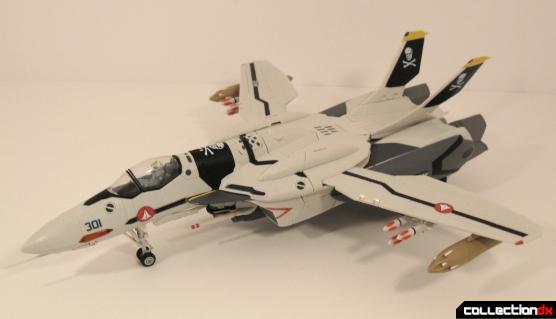 Lacking typical science fiction engines, the VF-0S is built around conventional jet engines which gives it a distinct appearance. It features oversized dorsal fuel tanks, large "turbo charger" style vents in its ankles, and a bulkier aesthetic than the VF-1S. Overall the VF-0S appears to be a fusion of old style Macross with many features of Shoji Kawamori's work on Macross Plus and Armored Core. For my pictures I have used the dorsal fuel tanks that allow for the mounting of the QF-2200. They differ from the normal fuels tanks in that they have slots for the Ghost and extra missile launchers. These tanks are attached via two pegs and can be difficult to remove at first. I would suggest sanding the pegs down a bit. 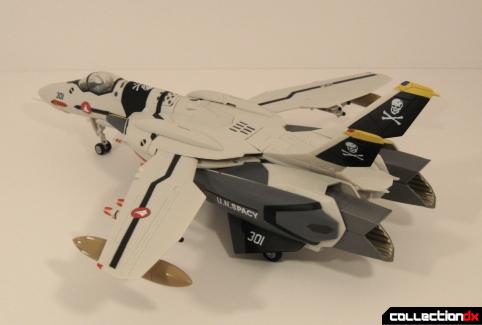 The VF-0S also features a pair of leg mounted FAST packs. These packs are a "proof of concept" version of the packs that would adorn the VF-1S. These are attached via a simple magnet. As you will see in the video, they attach quite nicely. 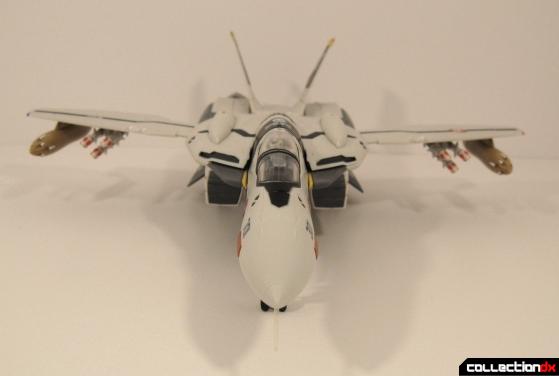 The VF-0S also comes with several underwing stores. The VF-0S by itself had only the four AIM-200A AMRAAM 2 missiles while the accessory set adds two micromissile launchers and a set of large gray fuel tanks. 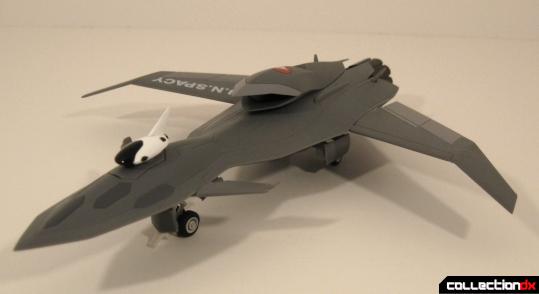 One of the recurring ideas in Macross is the presence of unmanned fighters collectively called "Ghosts." These serve to supplement the variable fighters in combat. The QF-2200D Ghost was initially sold as an accessory pack costing close to fifty dollars on its own. Fortunately, it became much cheaper to simply buy the two in this deluxe package. On its own the Ghost is a very simple toy. It features minimal tampoo printing and diecast landing gear. The two main wheels are notoriously difficult to extradite from their housing. You may also replace the Ghost's eye piece with a panel that lacks the eye. 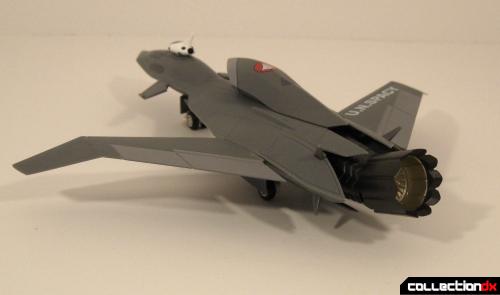 The Ghost's engine nozzle is mounted on a ball joint to simulate thrust vectoring. 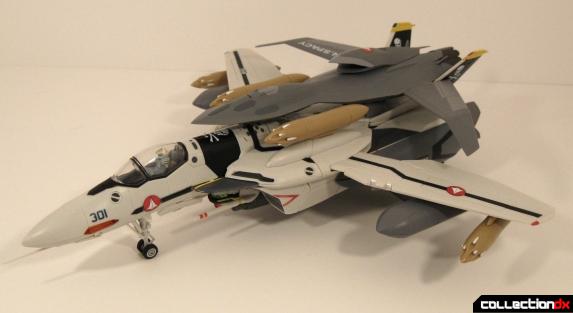 When it came time to boost the VF-0S's combat potential, the mechanics simply strapped a cut-down Ghost to the back of the VF-0S and added some more missiles. It is this very pragmatic approach that I find endearing. All that needs to be added to Ghost for this mode is a pair of mounting brackets which slot in on the underside. Simply flip the Ghosts's canards down and tuck them under the slotted dorsal tanks to attach the Ghost. Be sure the line up the slots between the Ghosts wings and body with the VF-0S's tailfins. 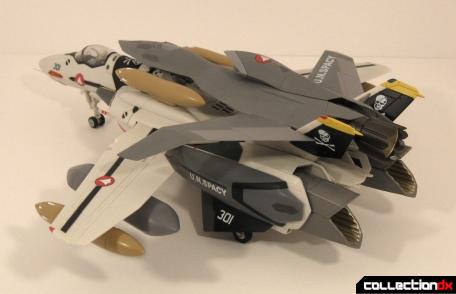 There is only one major flaw with this mode and that has to do with the fact that the Ghost is only secured at the front of the fighter. Turning the whole piece upside will not dislodge the Ghost, only unseat it a little. Still, it would have been better if there was a way to fully secure the Ghost to the VF-0S. 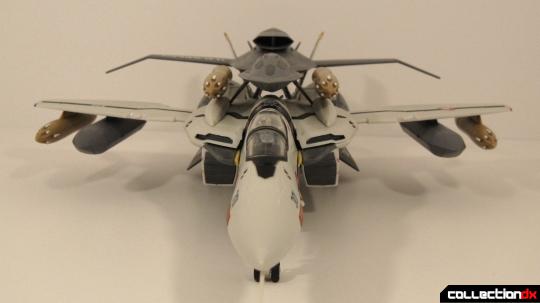 Together, the VF-0S and Ghost make for an impressive display piece.

The the interiors of the engine nozzles are painted using a brass color and look quite nice. 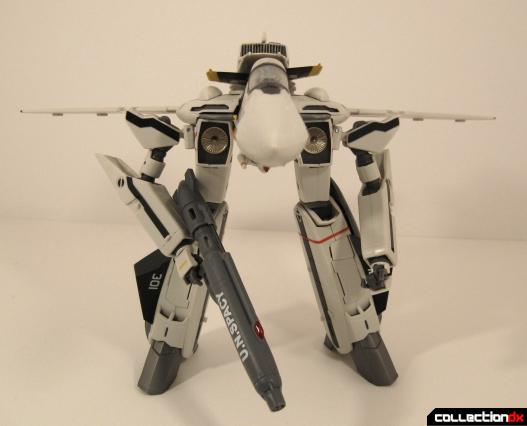 In GERWALK mode the VF-0S very much resembles its successor. The toy has very tight joints and poses well in this mode. Despite the fact that the VF-0S features the same terrible hand design as Yamato's 1/48 scale VF-1, it manages to clasp the gunpod without any problems. Also you can see the air intakes hidden under the removable covers. 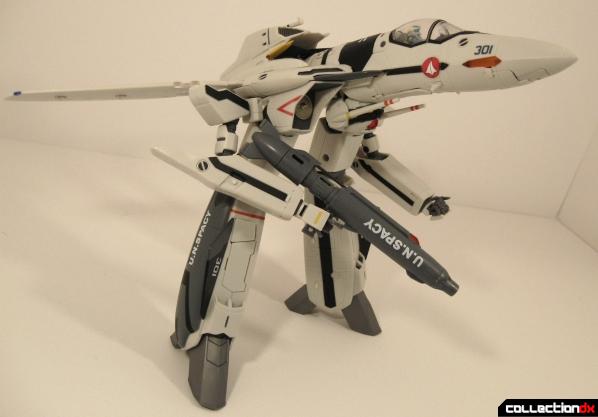 The transformation is very straightforward and is nearly identical to both the 1/48 scale VF-1 and the new 1/60 scale VF-1. 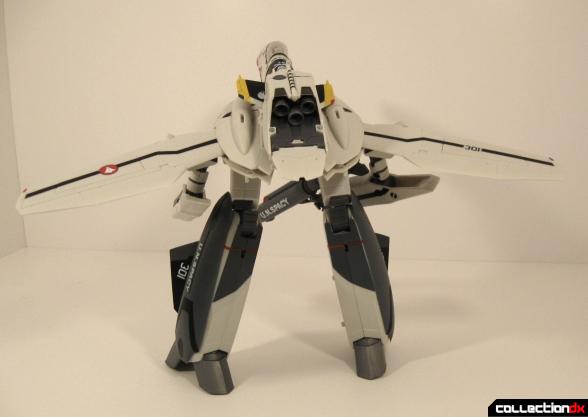 One key difference in the transformation is that the backpack nozzles slide in and out. Also the VF-0S's hands do not fully retract. 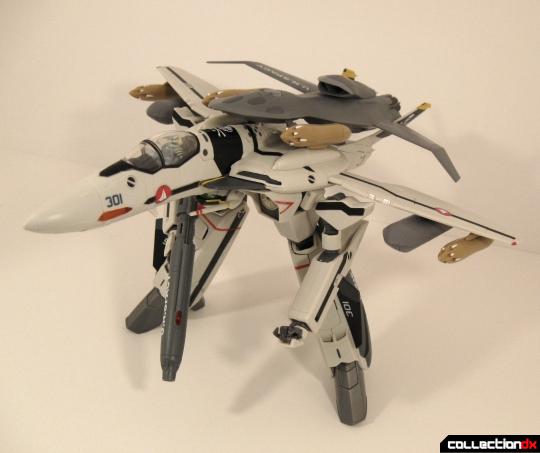 The Ghost can be mounted in GERWALK mode as well. 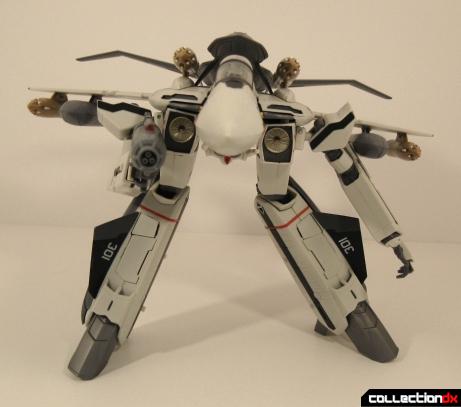 Even with the extra weight, the toy is still stable. 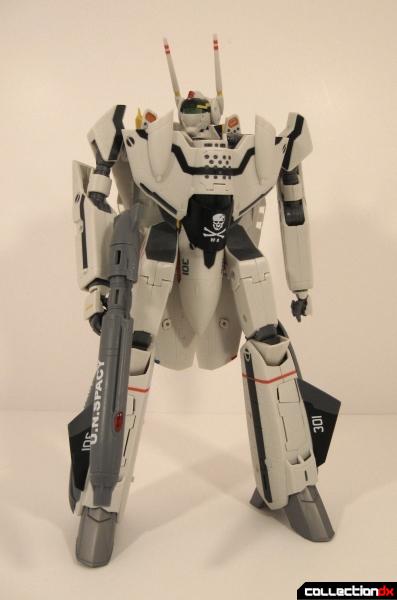 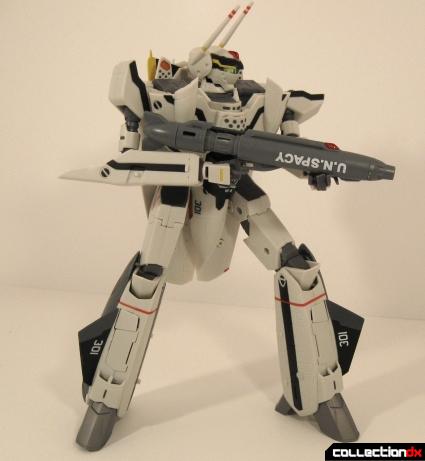 The VF-0S is a simple, sturdy robot toy. The joints on mine are nice and tight. 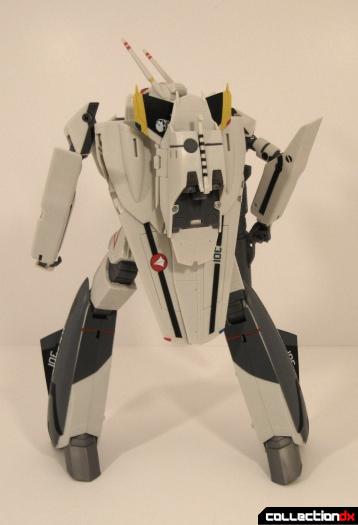 From the rear we can see the VF-0S's unique wing setup where one wing slides over the other. Also the arrestor hook is clearly visible on the backpack. In real Navy fighters, this is what allows them to land on a carrier by catching long cables strung accross the flight deck using the arrestor hook. 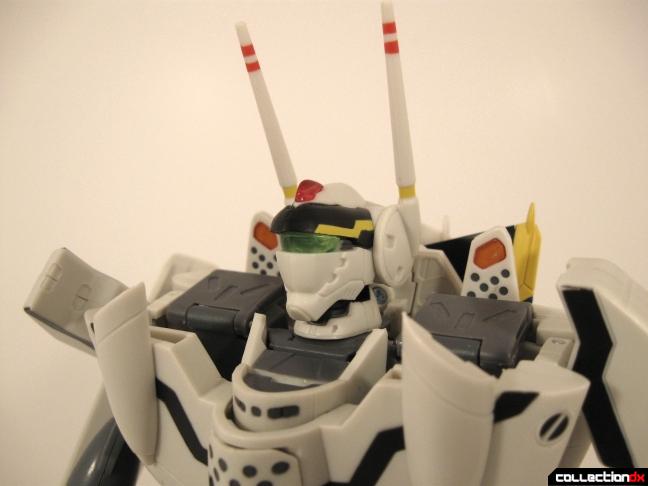 The VF-0S's head incorpates design elements from the VF-1S, later VFs, and the way the VF-1S is drawn in Macross: DYRL. The clear red and green pieces in the head look nice under any lighting condition. 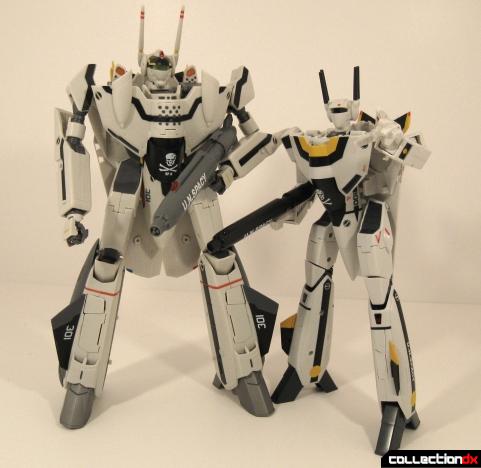 The VF-0S stands a few heads taller than the VF-1S in the same scale. 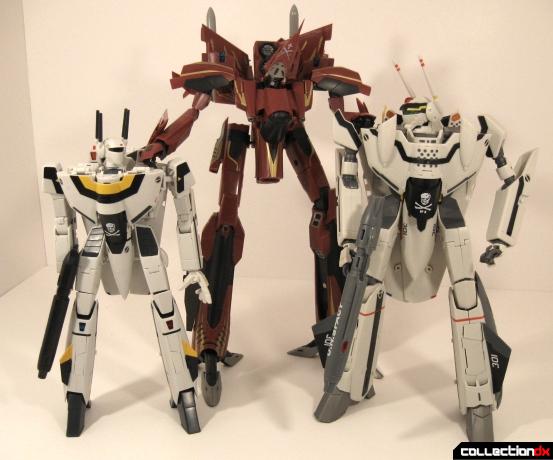 Neither of them can compare to the behemoth that is the Sv-51. 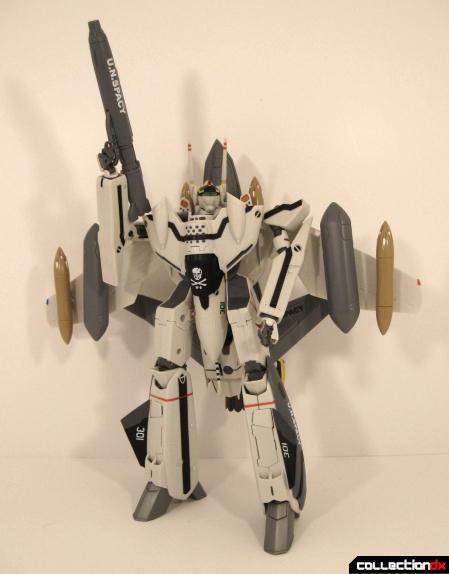 The VF-0S looks really impressive when it is fully loaded in Battroid mode. It stands without any balance issues. 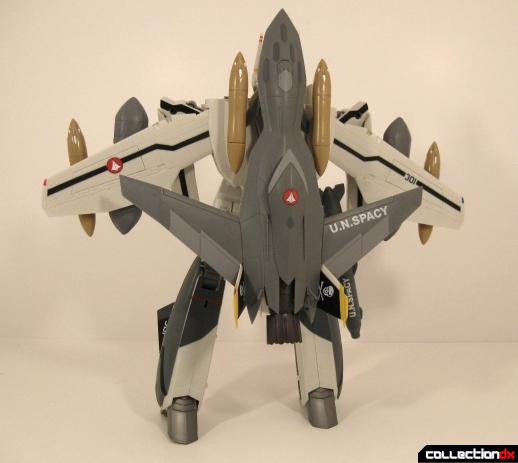 Even form the rear, the whole setup looks good. Nothing seems unbalanced or unnatural. 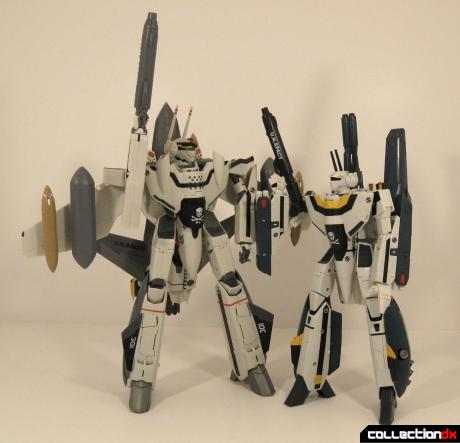 Overall I have to say that I really enjoy the VF-0S. It looks and plays well on its own or with its little brother.

16 comments posted
Be sure to check out the hot

Be sure to check out the hot VF on VF action around 4:02 in the video.

Nice review right there but in the case where I'm in which would you recommend the YF-19, VF-1 or the VF-0 for a good first piece?

if I have to pick just one, it will be DYRL Hikaru VF-1S with super parts

i love transforming robots and the Valkyrie toys have always interesed me, but I always felt unsure and even intimidated by the fact that I dont know a thing about macross and that there is so many different types in different scales that I didnt want to get a dud (curse you Garland) and be turned off. So I just steered clear. After reading/watching this review, I'm very interested in this.

Now if only I haddnt just spent all my money on SOC Gunbuster and SOC Baikanfu....

Oh, look- it's the Akira-prise!

Don't even start that. Seriously. The VF-0 is not that bad.

If anyone is curious, this is the 1/100 scale VF-0S that was canceled.

It's interesting that this thing was supposed to only cost 1200 yen (maybe 15 bucks with shipping) and yet Bandai's VF100 line intends to charge up 5800 yen for a product with the same premise. Granted they don't look nearly as ugly as the VF-0S prototype, but its interesting.

I really love the VF-0/1 design, my favourites in the entore franchise and every now and then I consider trying to get one of them, but the price is just too big for me, especially with the shipping :/ Maybe one they I'll be able to afford them, now I can at least look :D

I've heard about the shoulder-joint problems on the VF-0 releases. Is this review one a 2.0 release?

VF-0S is a really pretty bird. I had this on my wish-list for a long time...

Yes I mentioned that the bundled set is the one with all the fixes.

I bought mine last year, and its a great toy, just love it.
The only thing about it is that the gerwalk mode only looks really cool when you let loose the bar holding the legs. But not a big deal, real nice as fighter, ever more as batroid.