They sure know how to give us nostalgic collectors exactly what we want! And here's one of those things that, on one hand, I've ALWAYS wanted...and yet, on the other hand, never knew I wanted. I've seen pretty much every Godzilla movie--numerous times--as well as many other tokusatsu flicks from Toho and other studios. The stars of these shows were absolutely the kaiju. No doubt about it. The thing is, the humans did end up putting up a half-decent fight in many of these movies!

It would sometimes occur to me just how cool the futuristic weapons the humans quickly brought to bear were. Of course, these weapons would generally fare miserably against the monster of the week, but hey, they were cool nonetheless. Seeing these tiny, intricate models of tanks, jet fighters, mobile artillery, whatever, was really cool...even if only for a few seconds before they tossed, stepped on, or incinerated by the monster!

Well, those of you feeling me on this are in luck! Straight from HobbyLink Japan, we have the latest from toy-maker, Aoshima: the Type 66 Maser Cannon from 1966's War of the Gargantuas. Oh yeah, bring it!! 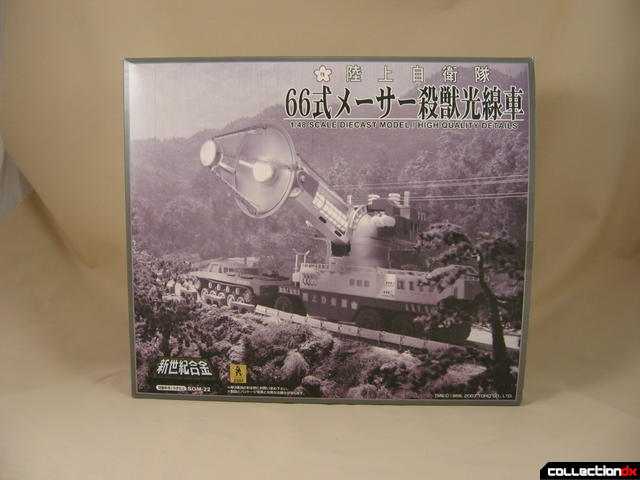 Finally, a high-end collectible of one of the most powerful land-based weapons featured in many Toho films. I know, this particular maser weapon is technically the one from War of the Gargantuas, but c'mon! How many times have you seen Godzilla and pals getting tormented by these lil suckers whenever they wandered too close to the National Diet Building or Tokyo Tower??? 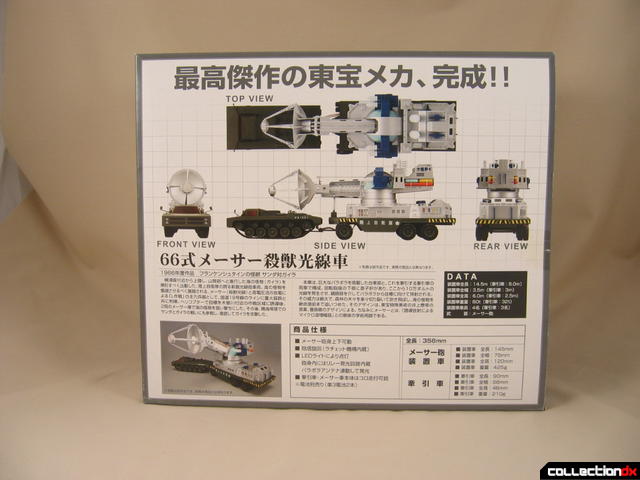 This toy is apparently part of the Shin Seiki Gokin line, but honestly, I'm not sure how anything qualifies for the title. We have diecast super robots, plastic transforming robot toys, high-end completed models of sci-fi spaceships...and stuff like this. I guess that since Aoshima puts out a lot of toys and models--of mostly real-world things--they just shove every high-end sci-fi product under the "Shin Seiki Gokin" heading. 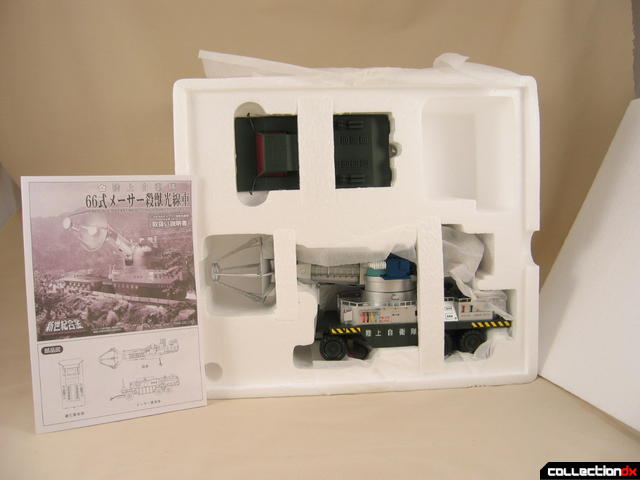 This toy is pretty damn cool...and that's all that matters.

It's pretty much complete right out of the box. And, oh, what a box it is. The glossy graphics on the box are lovely--especially the vehicle's schematics on the back. And also as usual for Aoshima, the toy comes housed in a great styrofoam tray. Unlike Shin Getter 2, the individual parts don't come bagged in clear plastic; instead, each part was wrapped in thin tissue/wrapping paper for protection prior to being placed in the tray. 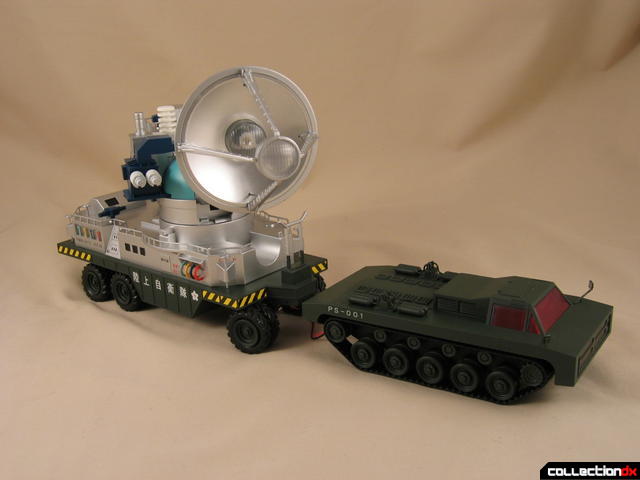 Once you free the components, it takes just a couple moments to install the required 2 AA batteries into the tractor (the forward vehicle that totes this beast around) and connect the wiring from the tractor to the maser trailer. The on/off switch is actually on the bottom of the maser portion of the vehicle, towards the rear end. 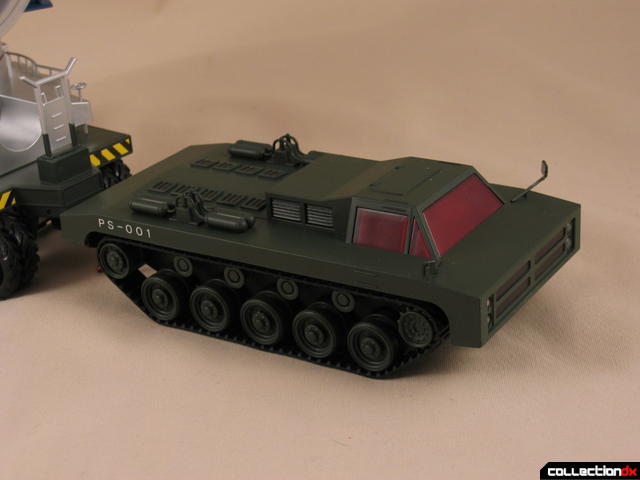 Now, when you flick the switch, the magic happens: a tiny white bulb in the emitter dish lights up AND multiple bulbs begin to strobe in the neck connecting the dish to the rotating housing. The pulsating effect is pretty killer! 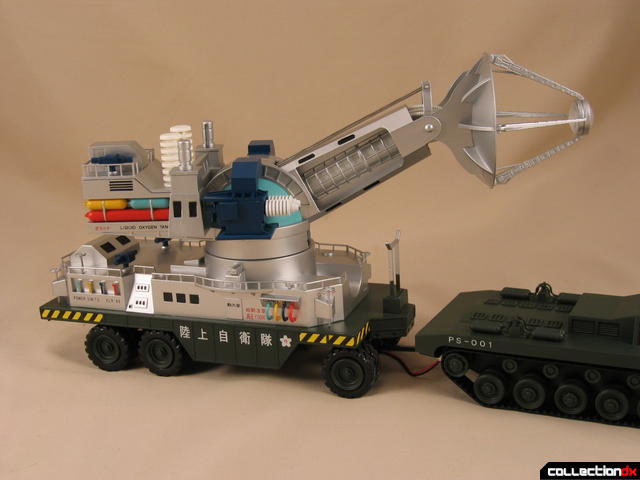 Honestly, I would have liked to have seen Aoshima build some kind of sound effect into this electronic rig. Sure, the light-up gimmick makes this toy...by far...but an authentic sound effect from the movie would have made this a perfect 10. Still, I'm just happy to have something like this to battle my glowies in the dark! ;) 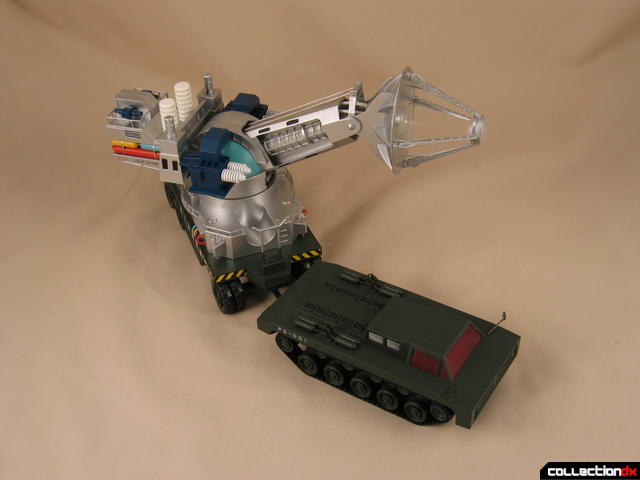 There are no other gimmicks besides the light-up feature. The gorgeous details and pristine paint job--which are obvious from the pictures--speak for themselves. The only "articulation" to speak of is the blue dome-shaped housing that rotates 180 degrees (90 to the left/90 to the right), the neck that elevates while the dish angles downward to remain pointed horizontal, and of course, the maser, itself, that is attached to the tractor on a pivot joint--perfect for dragging this thing valiantly across your rug...only to face certain doom against one of your fire-breathing kaiju toys! 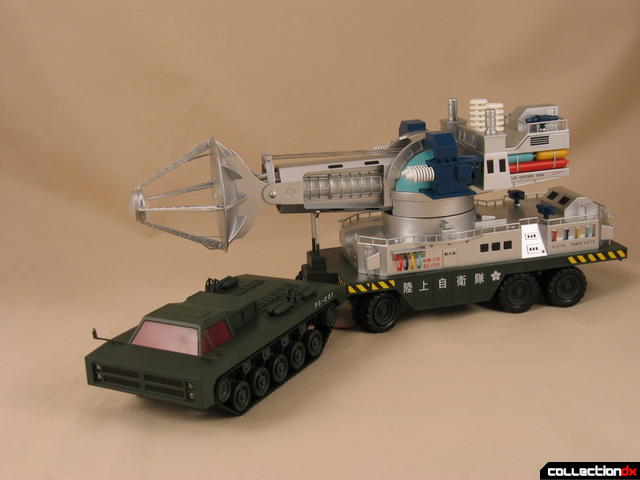 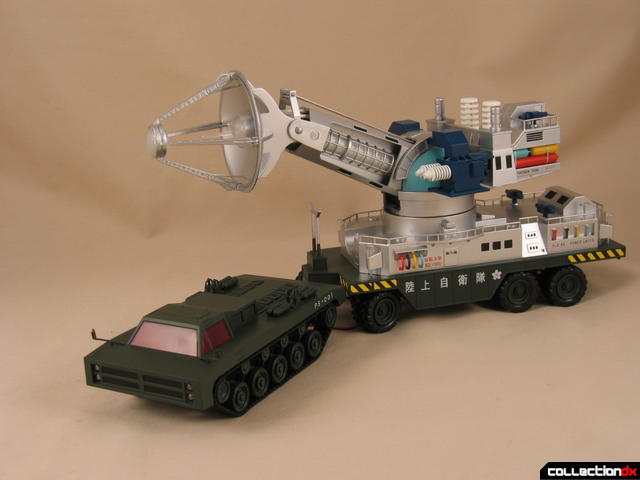 Well, that's about it. Not much else to say about this toy. Again, to make this toy a perfect 10, I'd add some sort of sound effect from the movies to go with the light-up feature. Also, while I love the real rubber treads on the tractor, I would have opted for transparent plastic for the windows--a nice touch like that would have complemented the other details used throughout on this toy. The remote-controlled version Aoshima recently released features pretty much the exact same design. Essentially, for about $50US more, you get a controller (remote, not radio...i.e., there's a wire that can be removed for display). This allows the tractor to move left, right, forward, and reverse, and you get to control the maser cannon's turning and elevation angle. Might be worth flipping this to check that out! 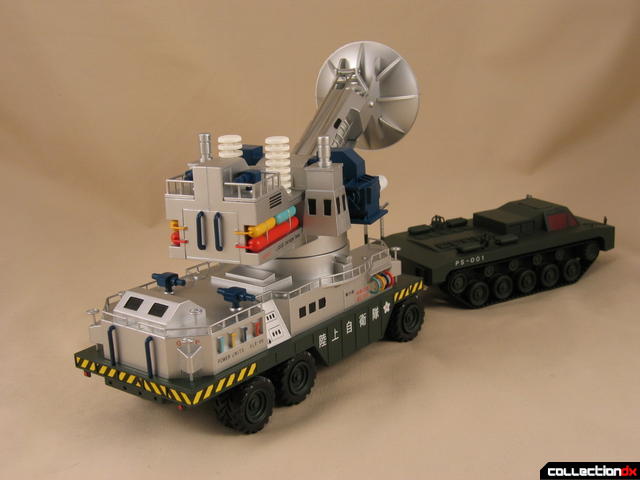 Lastly, I'll leave you with this...a silly video of me fooling around with my toys and my Best of Godzilla cd! Enjoy and, again, grab yours from HLJ!