Lets be honest here, nobody knows who the hell this is. I mean, we are largely robot people, and only those of us who happen to cross into other realms of Japanese Otaku subculture will recognize this. I am not one of those people, so I had to do a little homework for this one. 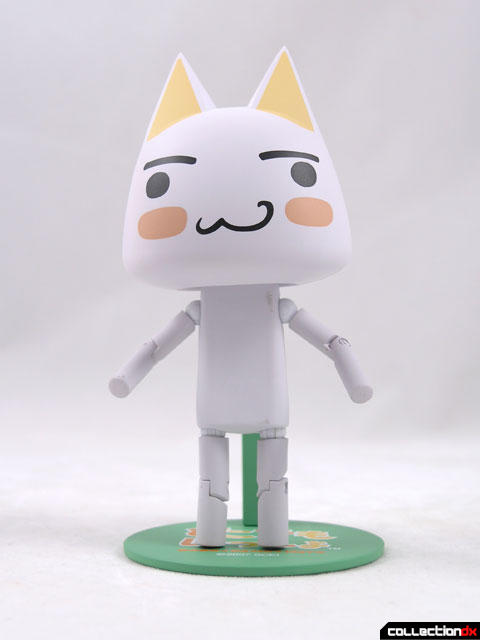 Inoue Toro (井上トロ) or just Toro comes from the Sony Playstation game "Doko Demo Issho", which means "Together everywhere". The game was released in 1999 and appears to be sort of a language teaching game. Toro has been given a life of his own outside of that game though, becoming a sort of Sony Mascot (sometimes known as the Sony Cat). Toro has appeared in several other games, and has a whole line of merchandising that bears his likeness. 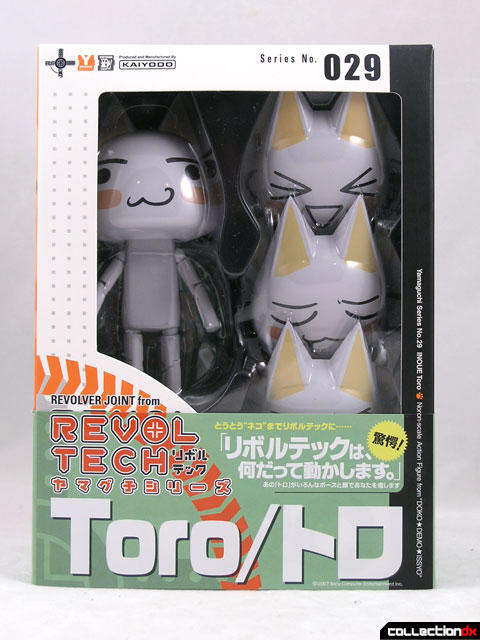 To a westerner, Toro seems an unlikely choice for the Revoltech line. It's not a robot, nor is it a humanoid figure. It's completely out of left-field. But it IS sculpted by Katsuhisa Yamaguchi so it is part of the main Revoltech line and NOT a 2G figure. Toro comes shipped to us from HobbyLink Japan. 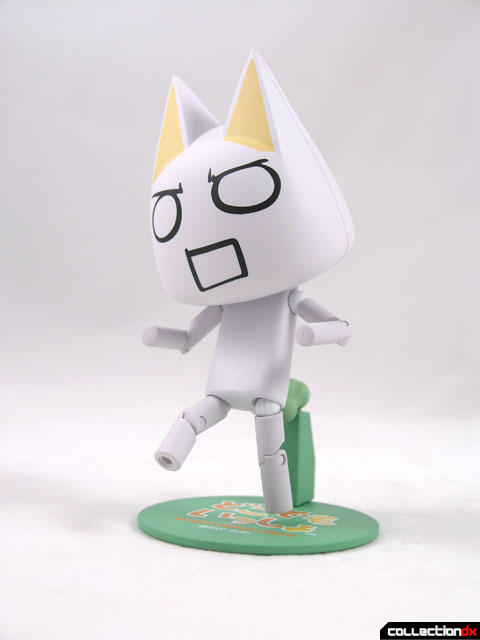 Inoue Toro comes with 3 interchangeable faces (in addition to the one on the figure by default). Each faceplate has a different expression for such emotions as Joy, Fear, Anger etc.. The face plates are on tight and I had to use a hobby knife to pry them off the first time. Subsequent switches went fine. Toro has a decent range of articulation for the design, with 5 Revoltech joints on the body and 2 on the stand. The elbows and knees have standard swivel joints. 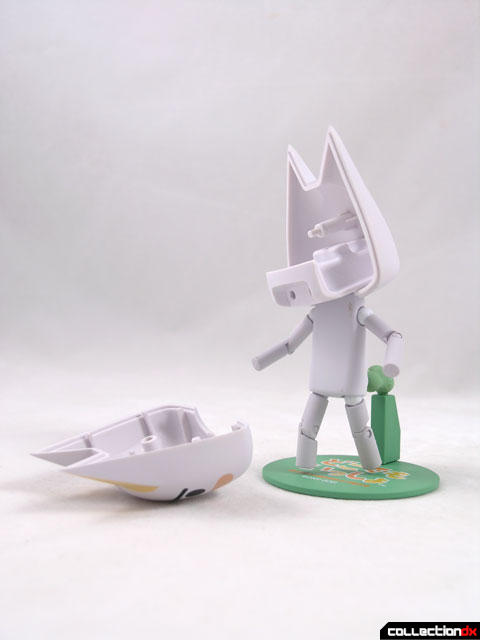 The figure is too top heavy to stand on its own, so it has a custom display stand that is unique to this figure. The green stand has the Doko Demo Issyo logo stamped on it and a unique dual Revoltech joint. The stand can attach to the tail of the figure, or to the holes on the bottom of either foot. 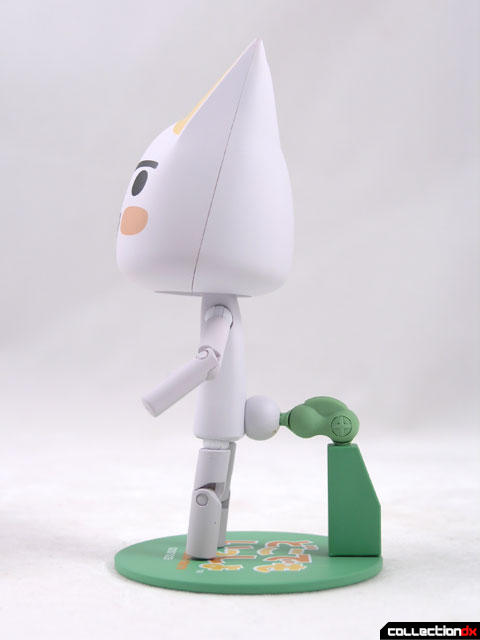 Toro is a well done figure, and people who already know the character will totally dig it. To those not so familiar, Toro may be a hard sell, but place this guy on your desk at work and you will get lots of comments. Change the face daily to reflect your mood! 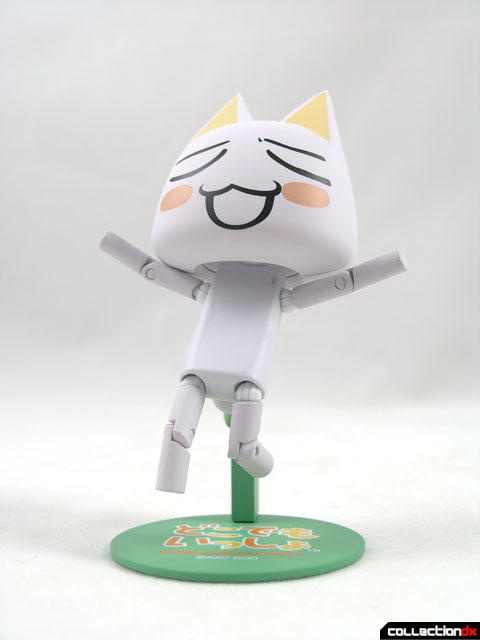 Maybe you just want to get Toro to swap parts with your other Revoltech figures? 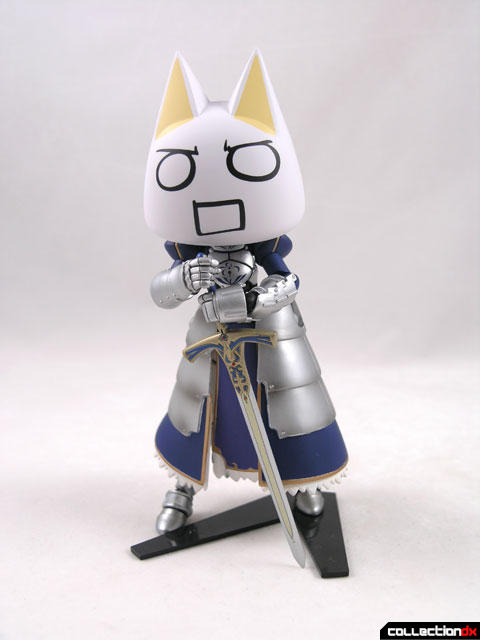 Surprisingly, Toro has grown on me. Perhaps he will grow on you too? Toro is available at HobbyLink Japan. 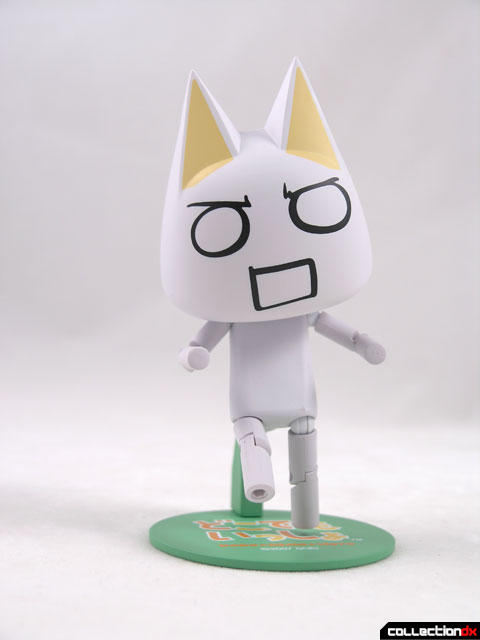 Kaiyodo also released a limited black version of this figure called Kuro from the game "Doko Demo Issho: Toro To Ippai". It was a limited Revoltech Friend Shop Exclusive.

Your theories intrigue me and I wish to subscribe to your newsletter.

I'll start googling, but, on the offchance I can't find jack, is this a .jp only thing, or might us westerners get in on it too?