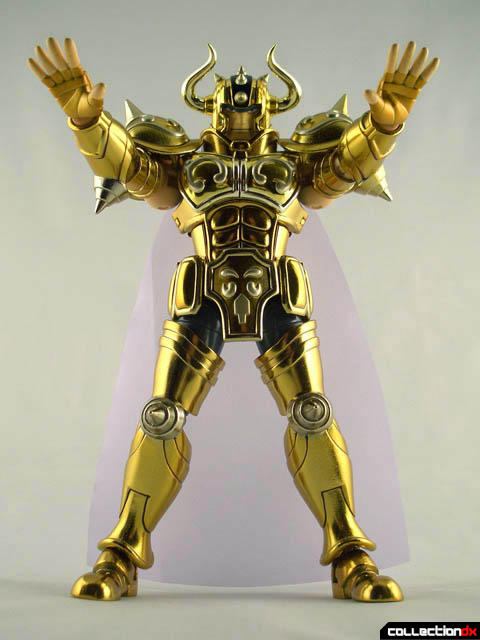 While Taurus Aldebaran was never a central character in the saga of Saint Seiya his few, brief appearances were always great. He was one of the few Gold Saints that realized early in the series that our heroes, the Bronze Saints did indeed serve the true incarnation of Athena and that the current Pope of Sanctuary was corrupt. 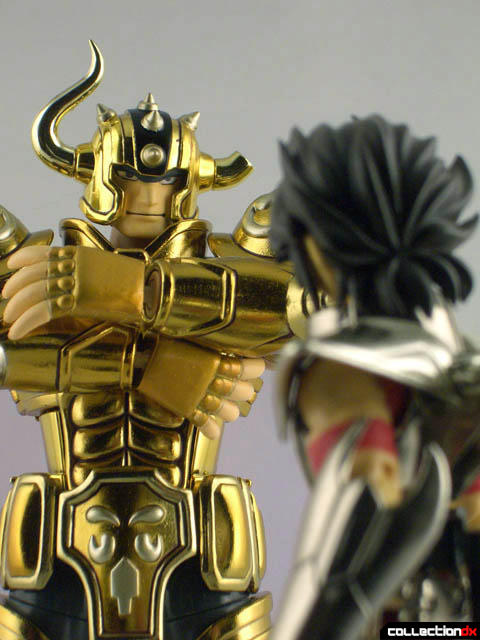 Aldebaran was first seen in the 12 Temples in the Sanctuary. At his Taurus temple, he faced the four Bronze Saints: Pegasus Seiya, Dragon Shiryu, Cygnus Hyoga, and Andromeda Shun. The four Bronze Saints were no match to Aldebaran since neither one of them had reached to the seventh sense. His battle stance (with crossed arms) allowed him to attack and defend at the same time; since he moves at the speed of light, he can launch his "Great Horn" and return to defense not being seen. Using his "Pegasus Ryu Sei Ken", Seiya reached to the seventh sense for the very first time, getting Aldebaran out of his stance and making possible for him to see his technique. In the end, he cuts Aldebaran's horn off his helmet. Aldebaran, who had told Seiya that he would let him pass the Temple of Taurus if he could break the horn, kept his promise. Before the four Bronze Saints left his temple, Aldebaran told them that without the seventh sense, they don't stand a chance against any of the gold saint. In order to reach to the seventh sense, they must burn their cosmo to the limit. 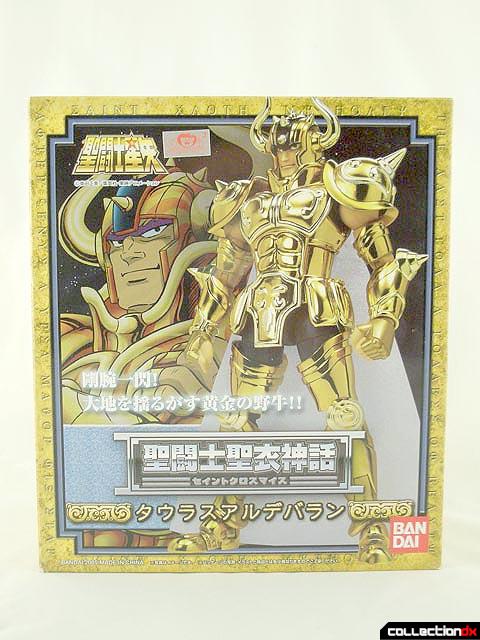 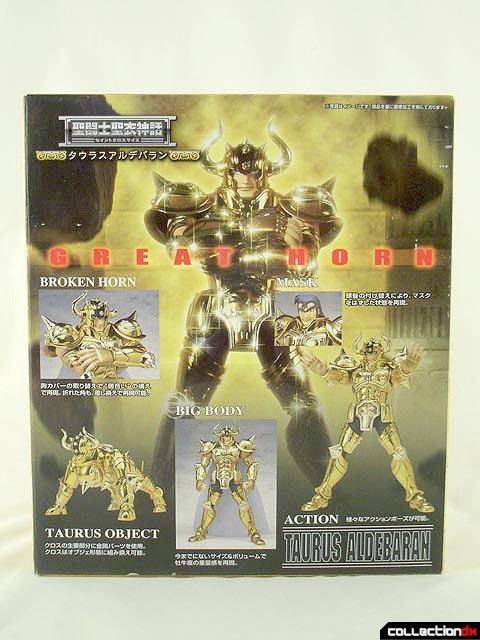 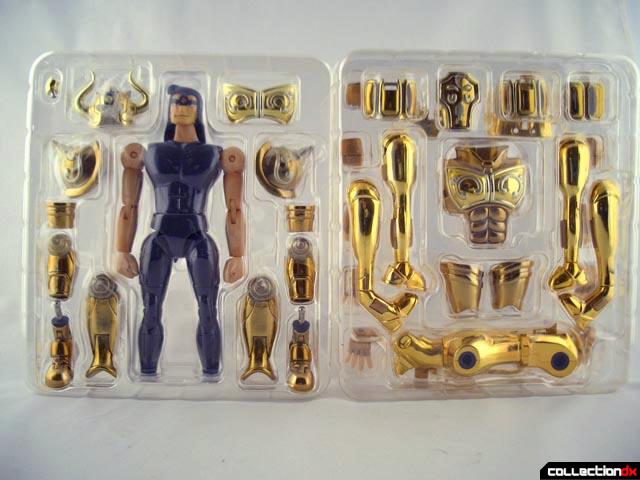 The package is the standard Saint Cloth Myth book style package. It opens to reveal all the parts and pieces neatly arranged. A nice thing about these boxes is they resemble books when stored spine out so even the packaging can be displayed neatly and you will most certainly want to save the packaging as keeping track of all the spare parts and pieces can be daunting. 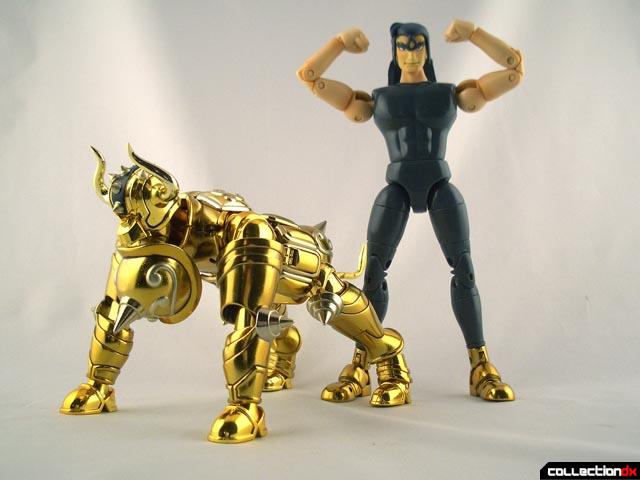 The figure is a Type-1 body type giving the body a nice range of poseability with over 40 points of articulation. The body is a softer plastic, the hair is more of a harder ABS plastic and the feet are die-cast metal. 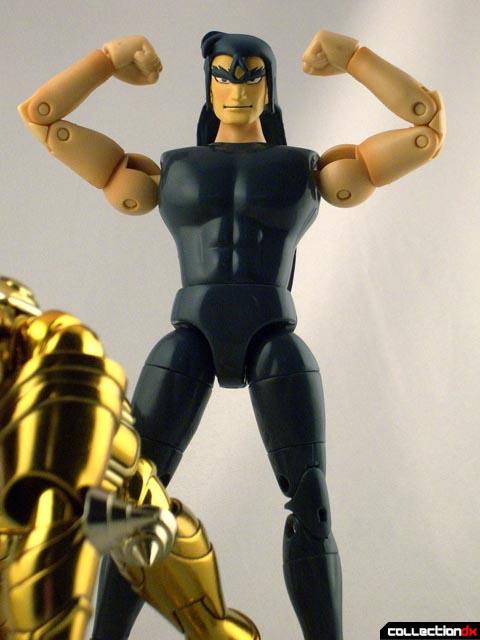 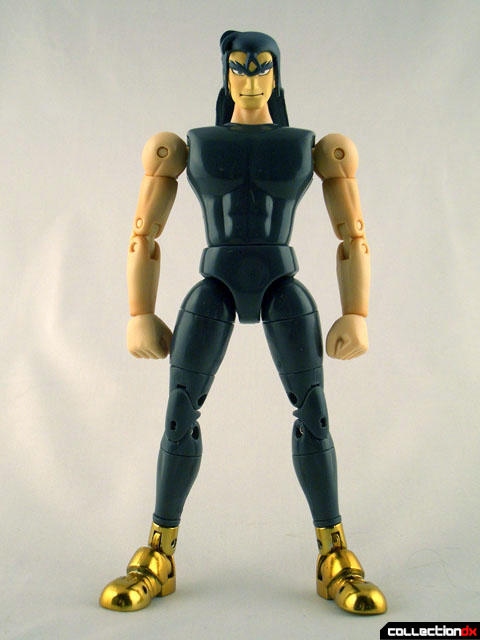 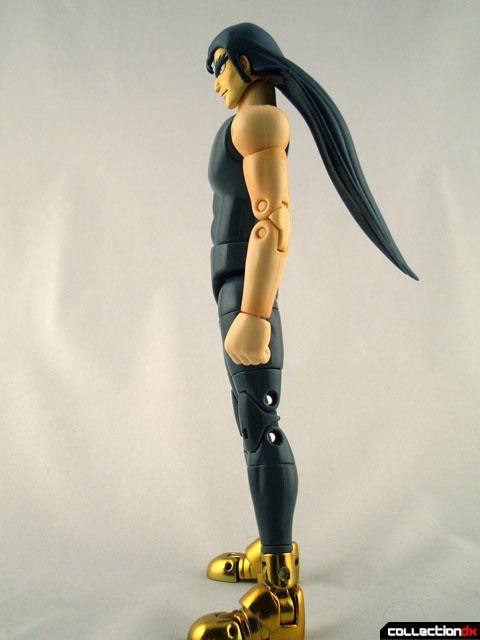 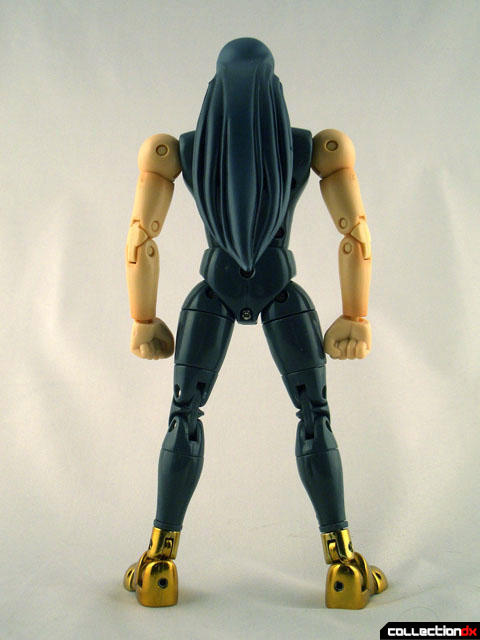 The body is pretty basic and utilitarian looking but once you get the Cloth on him he looks stunning. 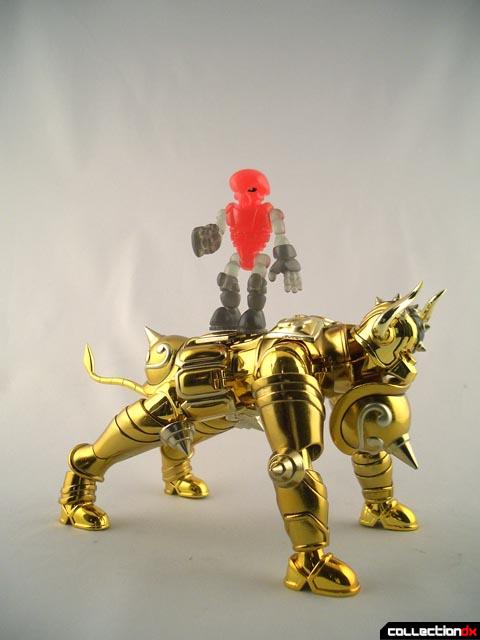 All armor's (in this case Cloth) in the Saint Seiya universe are aligned to some constellation in the sky and when not being worn form a statue of that constellation referred to just as an Object. In this case it's the Create Bull Hercules captured as one his Labors. 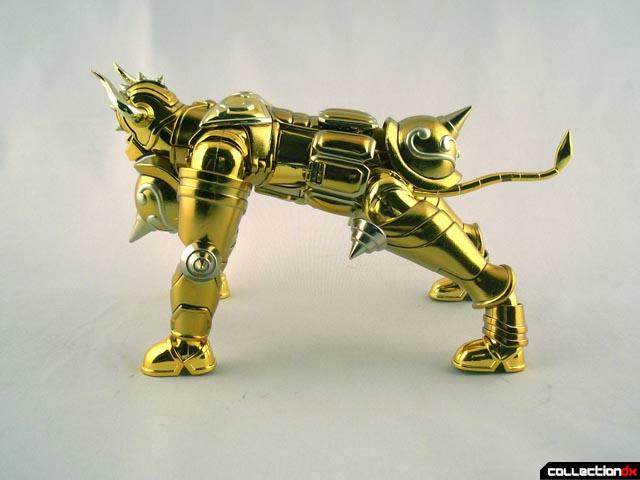 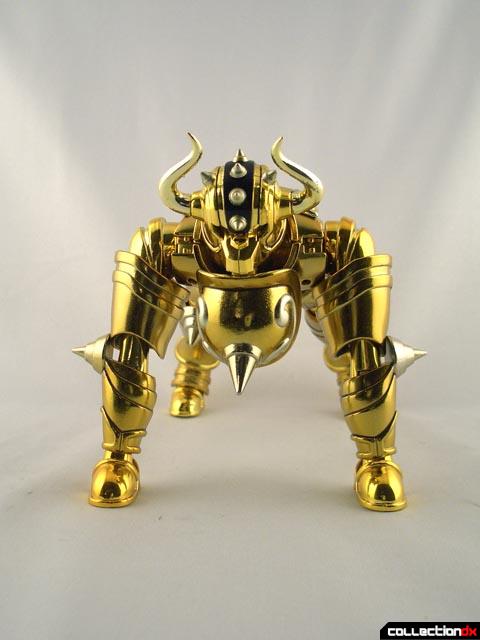 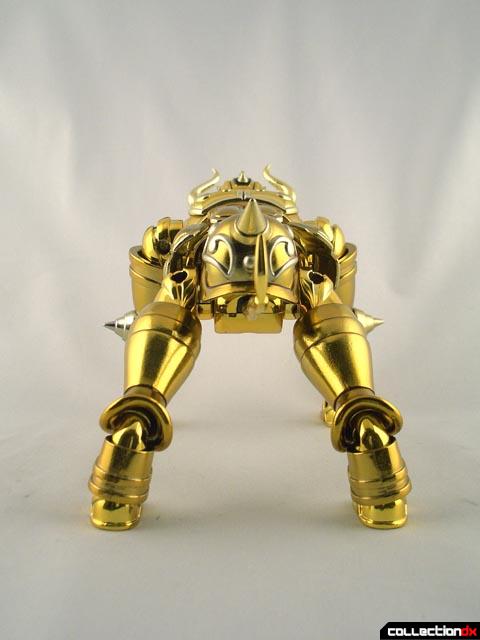 I had not originally planned on picking up the Taurus Gold Saint but I saw him on display in a shop window in New York and was immediately impressed with the way he towered over the other Saint Cloth Myth and I decided then and there to add one to my collection. Sadly the shop that had all these amazing Saint Cloth myth on display never seems to be open during normal business hours (three years in a row we have gone by this place while in New York and they NEVER are open.) Ah well... 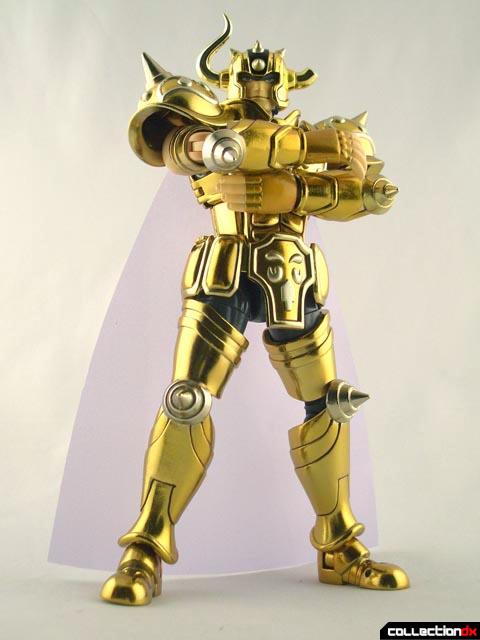 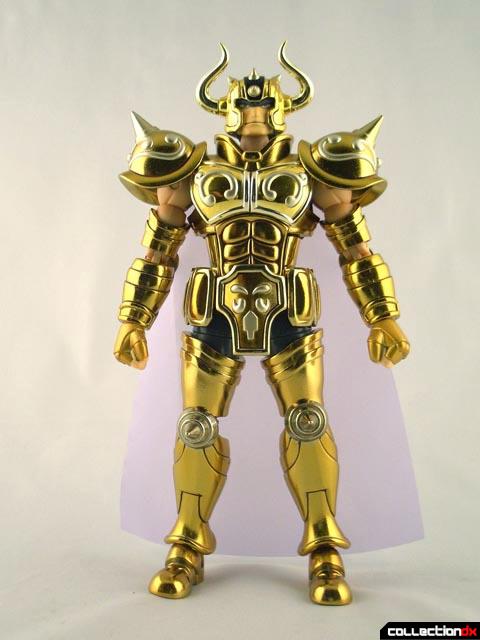 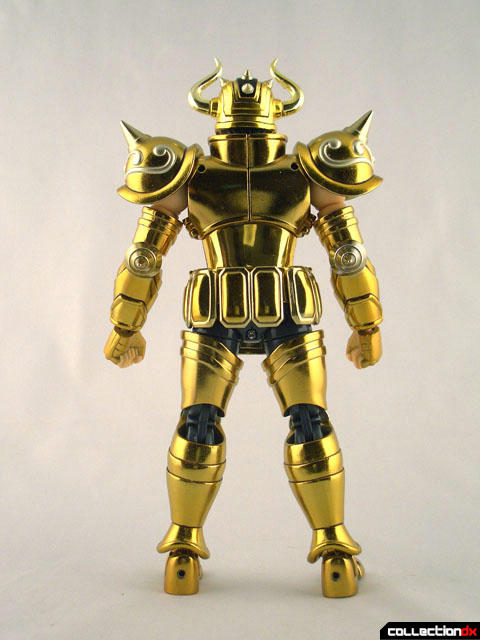 The Cloth is about 90% diecast metal with only the helmet and waist pieces being made of plastic. This sucker weighs over 2 pounds when fully assembled. 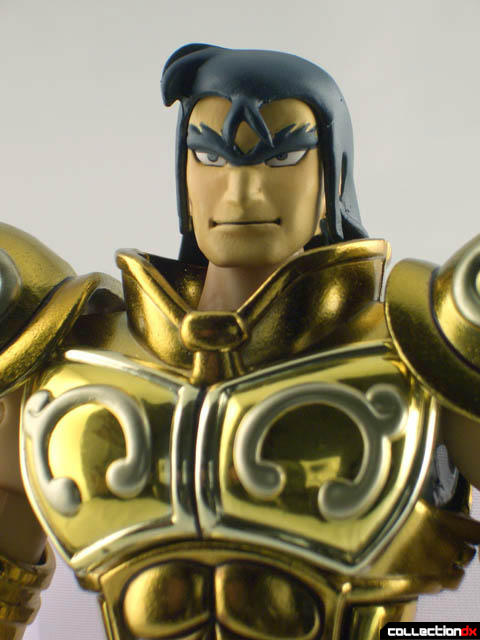 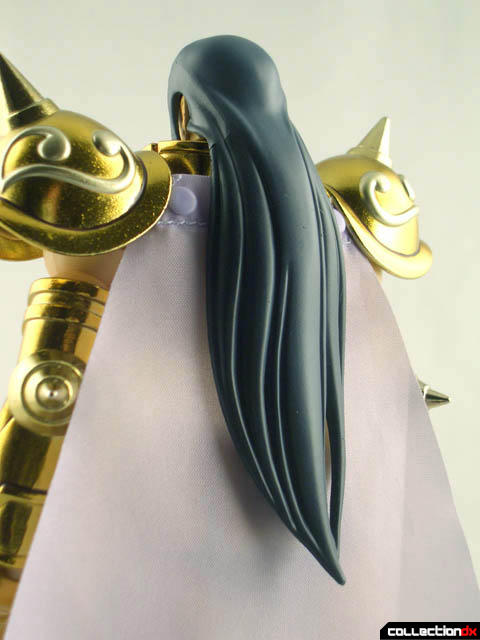 They do include an alternate and narrower chest plate allowing you to pose him with his arms in a crossed pose (His classic stance from the series.)

You can also replace one of the horns on his helmet with a broken one to display him after he has his encounter with the Bronze Saints. 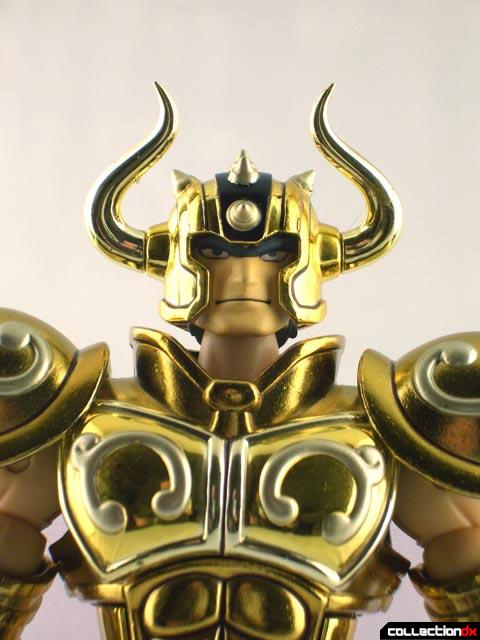 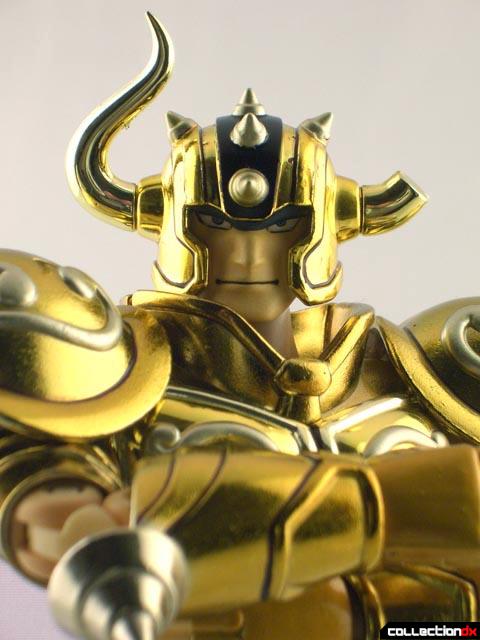 Whether your a fan of the series or not Taurus here really stands out on the shelf, is loaded with heavy diecast metal and just looks really cool all around. Die-hard fans of the anime and manga should consider this a no-brainer. Get him! 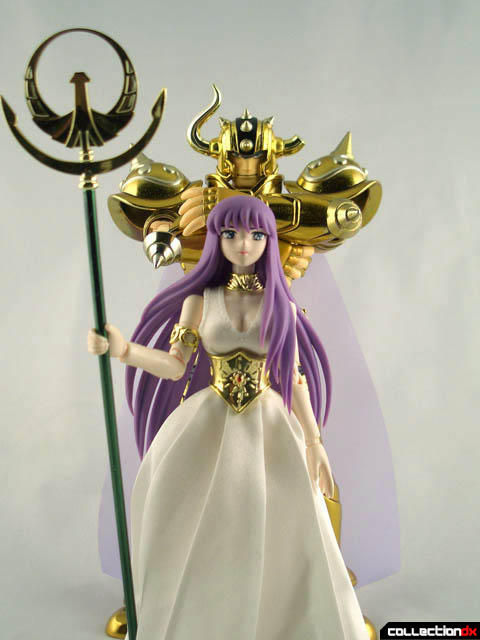 Be sure to check out the video below. I am now shooting in High Definition and this is the first S.C.M. in HD, enjoy!

All right, all right already, Atom! You keep making these things look so good, and keep throwing in the diecast comments, and now you say this is a big heavy one! You may have finally gotten through to my wallet. I'll have to check this guy out. I think he may look ok with other bull themed sentai stuff, such as Gingaman series, on a shelf, since I have no other Seiya stuff. I'm liking the box too. Thanks.

Hey Atom, wasn't sure if PM got to you. Since I may be able to get there, do you mind sharing the NY shop you saw this in? I'm happy to order from our sponsors also, of course. =oD

Wow... 2 lbs of diecast beauty on that amazing piece of engineering.

A thing like that would make anyone want to steal it & sell it in the black market for loads of cash.

Ever thought of displaying that piece in a safe?

Its the Elizabeth Street mall in Chinatown, NYC

great, just great... finally got around to leveling off and slowing down my buying cause I pretty much have everything I want and then I see this video. Im not into Seiya manga/anime etc. dont care much for them at all, but darnit this video shows what I love... Diecast, and it goes great with this figure... 2 lbs? YES PLEASE

The thing is, I know once I buy this figure I will want more right? cause I decided to buy "one" transformer (Encore Jazz) and now I am running back and forth to toy stores/HLJ/Ebay to buy transformers although thank God I dont like the newest TF movie line..horrible... I mean Megatron looks like a metal pointy sasquatch and has teeth.. I guess he needs to eat..and Sound Wave? Dont get me started...guess I'm a purist

anyways, guess what I am buying today? it gold plated and its not a robot..thanks Atom, thank you very much, my wallet, wife, racing car and bank account thank you. This is the equivalent of recovering alcoholic being handed a video of people drinking and partying after walking out of AA. Awesome video by the way.

"thank God I dont like the newest TF movie line..horrible... I mean Megatron looks like a metal pointy sasquatch and has teeth.. I guess he needs to eat..and Sound Wave? Dont get me started...guess I'm a purist"

No sir, you're not a purist...you're just being a realist, and this nation needs realists now more than ever.

I think after I saw your review, I decided to get this myth cloth. As you mention he is quite heavy and he looks awesome with the other 3 gold saints I have. I wanted to get him because he was the tallest myth cloth figure. But now with the Asgard Warrior, Gamma Fecdatol, towering in at 9.5 inches tall, Taurus Aldebaran won't look so tall. I know the first myth cloth you reviewed was an Asgard Warrior, Hagen; Do you think you'll review Gamma Fecdatol when he comes out? I always look forward to your reviews. Keep up the awesome work.