Last year's Easter Basket Gundam Junior Machinder caught me totally by surprise, but this year I started looking a couple months back. Every time I stopped in a Walmart or somewhere that was selling Easter Baskets, I'd check to see if there was anything similar this year. No dice. All this year's offerings seemed pretty boring. Cars. Dolls. Balls. Typical kids toys. But the other night I got the word from JoshB that there was indeed another Gundam up for grabs this year. But it was only sold at K-Mart, a store I really never go to. The hunt was on.

But either this one was produced in smaller numbers than the other baskets, or just sold much quicker, because between Sanjeev and I, we checked 4 different stores before I was lucky enough to find this one specimen, buried in an aisle display at a Big K-Mart. I had thought it was just a recolor of last year's toy, but as soon as I picked it up, I could tell it was drastically different. 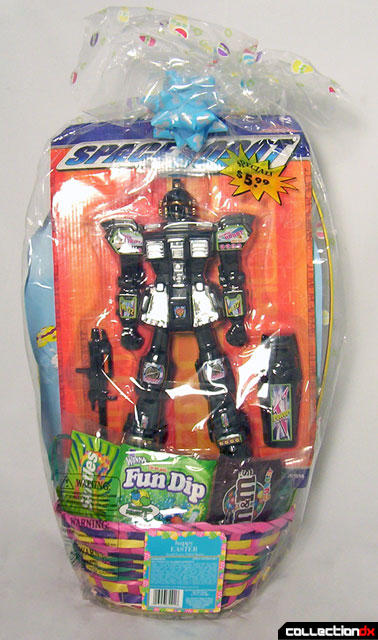 As you can see, it's packaged the same, carded and placed inside a basket with some candy and a bow on top. But everything else is different. The most disappointing thing about it is it's size. While still a significant toy at 11" tall, it pales in comparison to the previous one. The whole thing is molded in black with gold and silver painted highlights and with some absolutely garish and nonsensical stickers all over it. "Power Robot", "V Power RX08 GP00"", "H-02", "MSF-0071", "King", and my favorite, "Win" are written on the stickers. 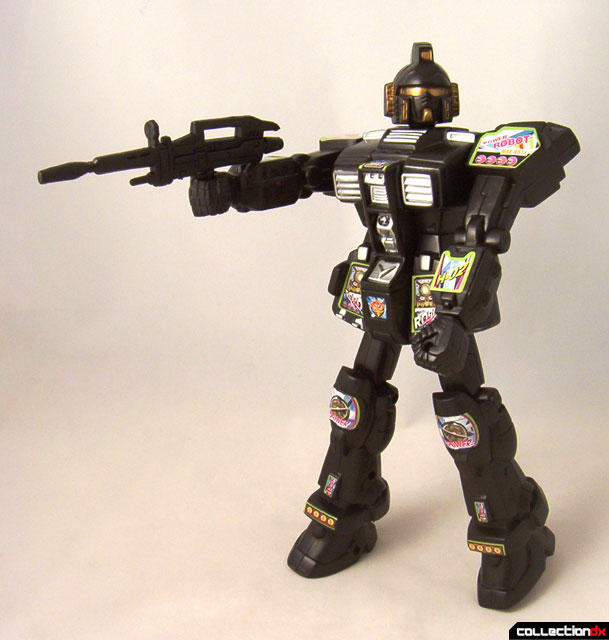 This Gundam is not as cool as the last one. While it has a new gun and shield, it is not nearly as well articulated. It can move at the neck, shoulders, hips and knees. The arms only raise and lower, though. You can't spread them out sideways like before. And the legs are permanently in that slightly outstretched position. Techincally, I suppose this gives it even more of a Machinder aesthetic than last year, which makes it even more a disappointment that it's smaller.

This one does have a feature not included before though. By pressing a button on the back, you get that favorite of bootleg toy makers....a light on the front. 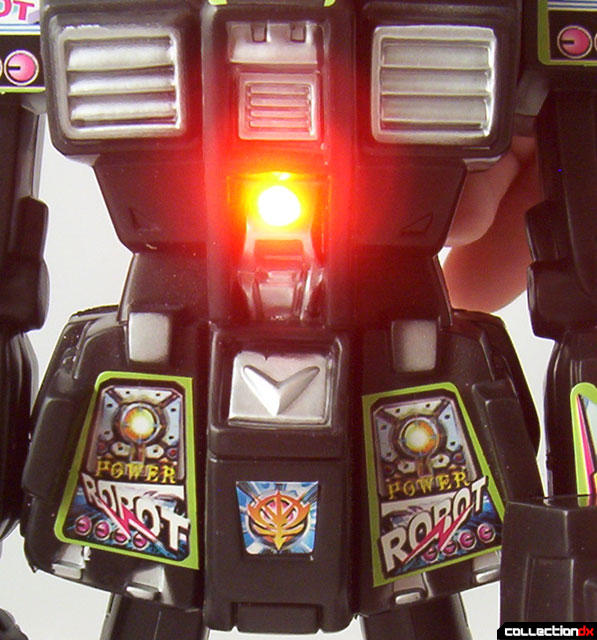 It's interesting that this says it is made by a different company than the last one, especially since the card from last year has a picture of a black Gundam toy that looks much like this one. The mold is not the same, but all the stickers are.

As with before, this is only for Gundam and bootleg fanatics and I'm not a big enough Gundam fan to know where the design is taken from. So if anyone would like to clarify, please leave a comment.

Cool piece and an awesome review. I've spent some time looking around for one of these for myself down here in FL but no dice. oh well, Any chance of getting a shot of this guy along side last years gundam and the clover junior? Looking at this piece it looks like the majority of the design was taken off the original RX-78, with the shoulders and lower legs coming from the GP01 from 0083, though overall they did tweek the design a bit here and there, still an interesting piece.

I've seen the Easter basket with this toy at Big Lots--at least five at the one in State College, PA. It might vary from state to state, but Big Lots/Odd Lots is a good bet.

Sorry for the wait, I totally forgot to do this...

And I'm sure you know this, but the original Gundam junior wasn't by Clover. It was aby "SMC", judging by the imprint on the back.

woa sweet, the sticker on its skirt is the zeon emblem, but you probably already saw that.
I don't have a kmart in my town, so I couldn't get one. Oh well, theres always next year..maybe.

A few days ago, I found a bootleg similar to this. It had no light & sound, but shared the sculpt of the torso. Here's where it gets interesting: the head and arms were from the famous shiny-black Griffin labor from "Patlabor", but the legs & feet and rifle were from the Gundam GP03S Stamen from the "Gundam 0083 Stardust Memory" OVA! A customized shield was included, and it was molded in black, and painted gold & red, with customized decals. The whole thing stood probably 10" tall.
------------------------------
CollectionDX Staff

You bought it, right?

I can't imagine that I would ever see a Japanese robot toy that wasn't worth a dollar to me.

Which dollar store did you see it at?