When Hasbro announced Transformers Titanium at last years Toy Fair, I was thrilled at the concept of a return to diecast metal transforming robots. However, when lukewarm reviews of the first of the line came out, I decided that I was not going to collect the line, due to space constraints.

However, when browsing through TRU with my kids, one Titanium really caught my eye – Soundwave. Although I am not a huge Transformers collector myself, I have always had a soft spot for Soundwave. He always looked so damn cool. With some urging from my son I took the plunge and bought my first Transformers Titanium. So how is it? 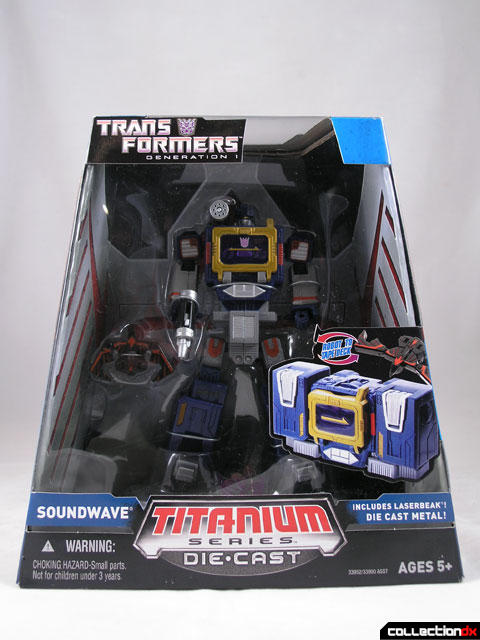 The figure comes packaged in a more ornate than necessary plastic bubble, surrounded by a cardboard box. On the back is a blurb about the character:

“Behind every villainous leader is a cadre of shadowy figures who remain hidden, offering vital encouragement, support and advice. These secretive advisors are often the true power behind the leader, for they control the flow of information that motivates his actions. They feed him flattery and lies that allow him to continue on his path of destruction without suffering the pangs of conscience or the depredations of being proven wrong.

SOUNDWAVE is one such individual. A creature of secrets and silence, he fades into the shadow of his commander MEGATRON, all the while subtly steering the DECEPTICON commander to his own ends. He prefers to remain out of sight and out of the fight, often appearing only as a menacing presence behind his leader, arms folded, his inscrutable visage promising nothing beyond cold calculation. Despite his maneuvering to improve his status, he is totally loyal to MEGATRON. He hides information or lies only if he believes it would be to his leader's detriment to hear the truth.

Detailed die-cast metal SOUNDWAVE figure changes from warrior robot to monster vehicle and back! Figure comes with LASERBEAK figure and display base.” 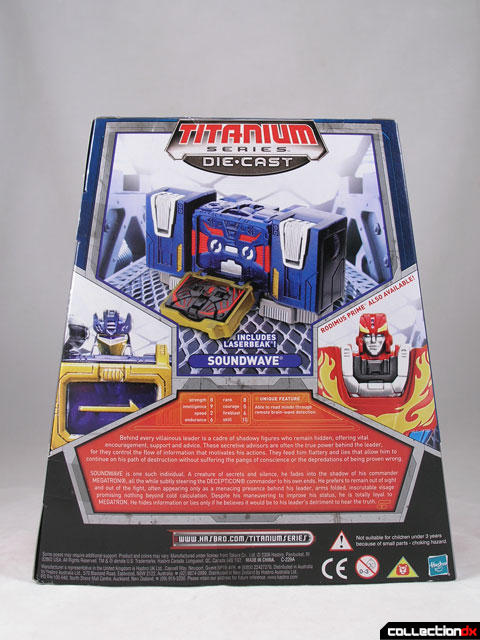 Soundwave includes the cassette robot Laserbeak, as well as 2 weapons and a base.

The figure is just ok. While I applaud Hasbro for making the leap to diecast toys, this toy just lacks in execution. The proportions are all odd and the transformation is weird. It’s hard to explain, but it feels like a transformer designed by someone who has never played with transformers before. It feels like a very American re-imagining of a Japanese toy. The transformation is essentially the same, but somehow very different. 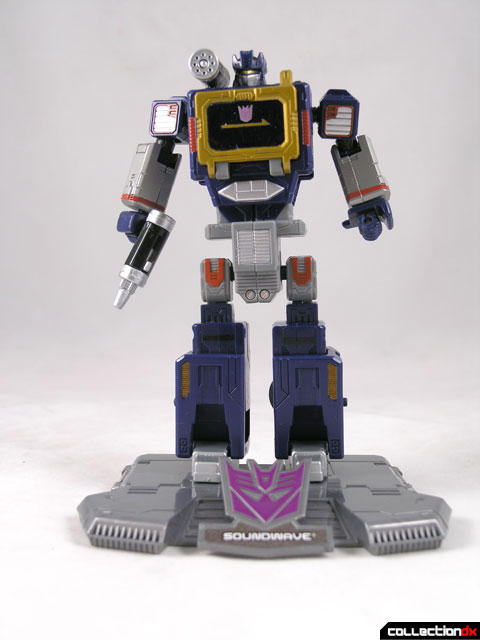 The head is really sharp – it looks just like Soundwave should: evil and menacing. The head rotates and folds back into the body just like the original did. The main chest is diecast metal, with an opening cassette door. The door is not spring loaded. Lazerbeak can be stored in the chest in cassette mode. 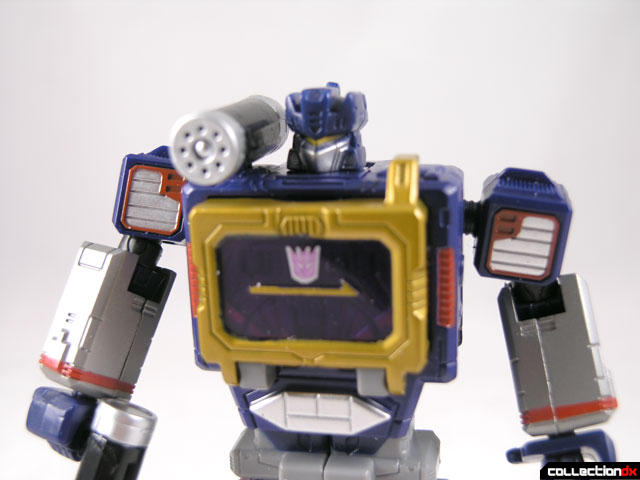 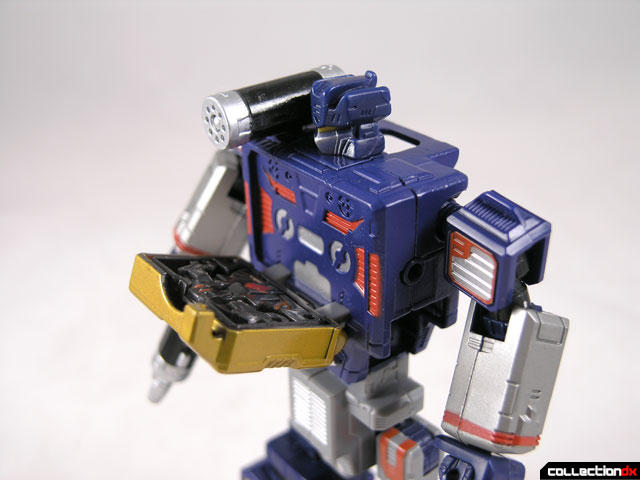 The arms are connected to the main body by ball and socket joints. The arms are jointed at the elbow and at the wrists. When transforming Soundwave, the arms swing back around and collapse at the wrist. The arms do not slide in, rather they turn inwards and small pegs secure them to the back. The pegs look rather unsightly in robot mode. 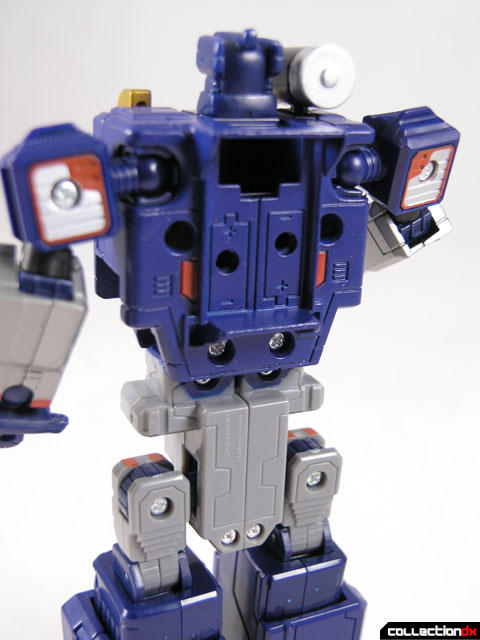 The legs are where it all starts to go really wrong with this toy. Each leg is secured to the waist by a small peg that slides up and down in a channel, depending on which mode the toy is in. The peg and the channel are plastic. The peg has a tendency to pop out easily, resulting in the legs often falling off when transforming the toy. The legs are just too heavy. There is also no forward and backward motion at the hips, so the legs are essentially stuck in the one pose. 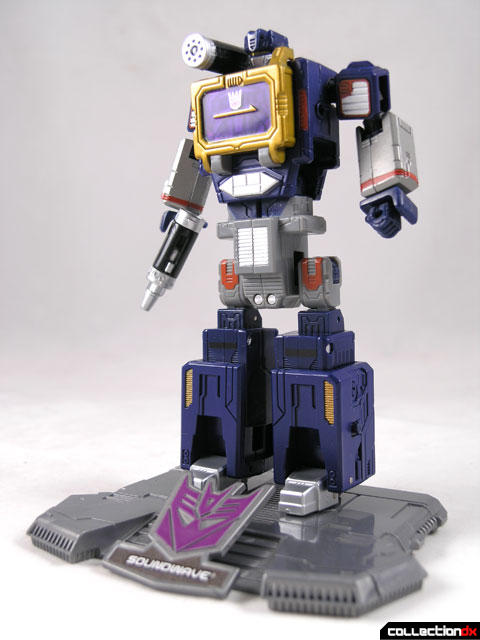 There are knee joints, but they are almost useless due to the inarticulation of the hip joints. The lower legs are diecast metal and are supposed to click down during transformation. Unfortunately, one leg doesn’t click on mine, which results in a permanent lean.

The feet are bad. One part unfolds to become the toes, and then a smaller part underneath folds back to become the heel. The result is that the feet are too far forward, making the toy prone to falling backward at the slightest motion. 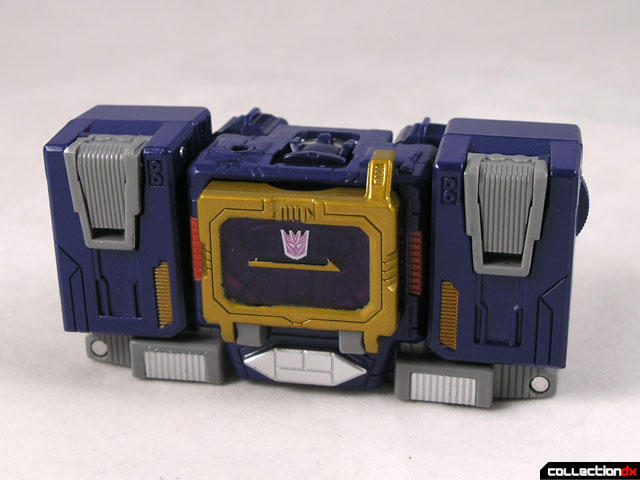 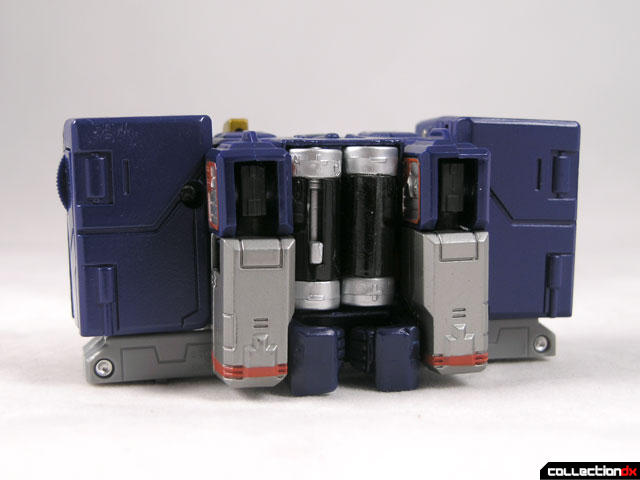 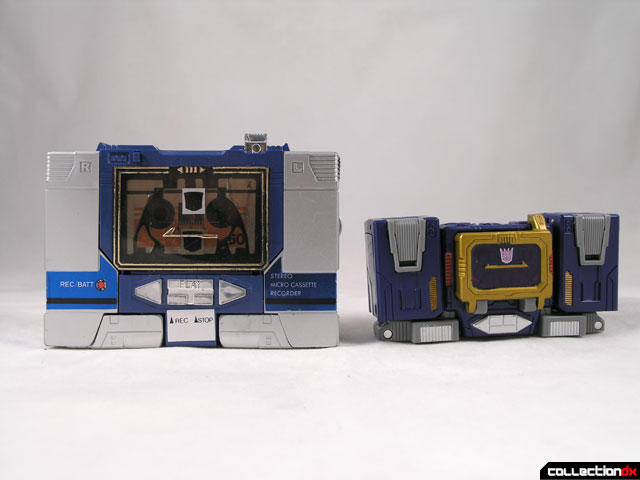 Transformation into radio mode is simple enough and almost identical to the original. After you have the arms swung around back, you fold back the feet, compress the legs, and swing each leg out to the side. The shoulder cannon and arm gun act as batteries and are stored in the back, just like the original. There is even a small dial on the side, another nod to the classic. 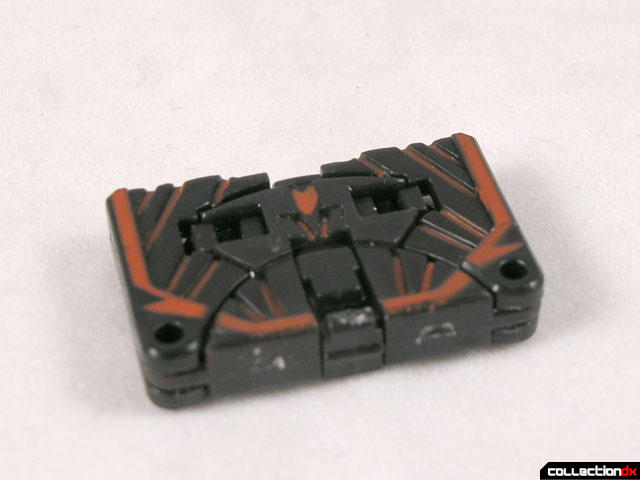 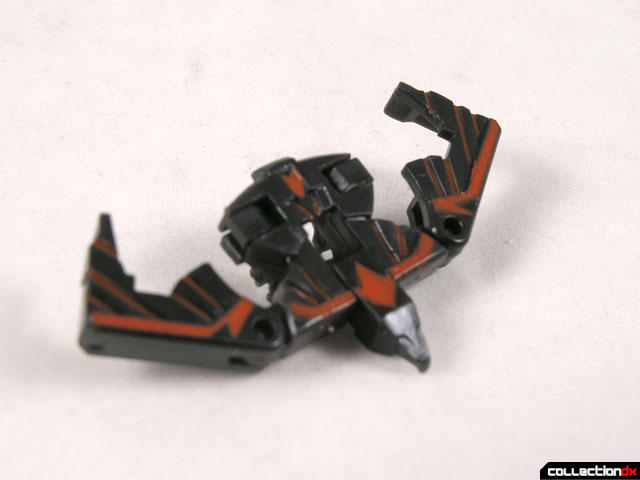 The base is worthless. The base has no peg or grooves to stand the toy on and does not help the already tipsy toy. There is a Decepticon logo in front, but that bumps off with the slightest touch. 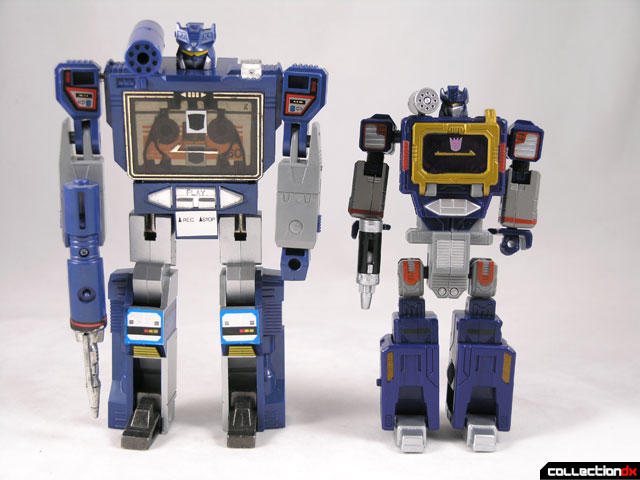 Titanium Soundwave was a nice idea, but somewhere along the line it went horribly wrong. I knew I should have picked up that Rodimus instead…..