Well, it took about seven years and almost 20 SG's to get around to it...but Getter Robo Armageddon fans finally have the next edition of the ultimate machine, Shin Getter 2. Brought to us by HobbyLink Japan, Shin Getter 2's primary feature is no different from the other super robots of the Shin Seiki Gokin line: gobs and gobs of lickable diecast metal! Yup, this thing's a heavyweight, despite it's shrimpy anatomy. 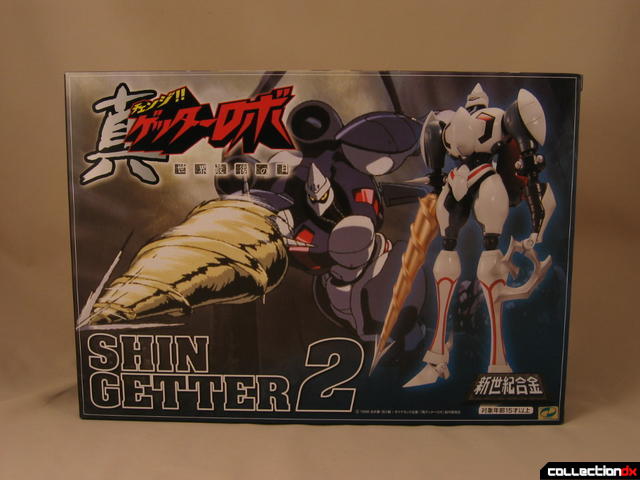 First, let's start with the packaging.

Y'know, it's very easy to overlook packaging when it comes to toys--especially new ones. With vintage toys, one is almost obliged to take it all in--to enjoy every square inch of printed graphics. By the very nature of "vintage", it is rare and limited, so every part of the toy experience becomes special. Not so with new toys. So many new toys' packaging is taken for granted and not shown the same sort of respect given to vintage toys. Afterall, new toys aren't often particularly hard to get or limited in any way. That lack of respect is a shame, too, because some of these boxes are great!

One thing that's always impressed me about Aoshima's super robot offerings was the care shown in developing the packaging. The front of the box features a photo of the toy in the foreground, with a drawing of the robot in the background. Nothing too ground-breaking here--especially since such a layout is fairly common in modern toys--but the simplicity of the formula really works with this toy. 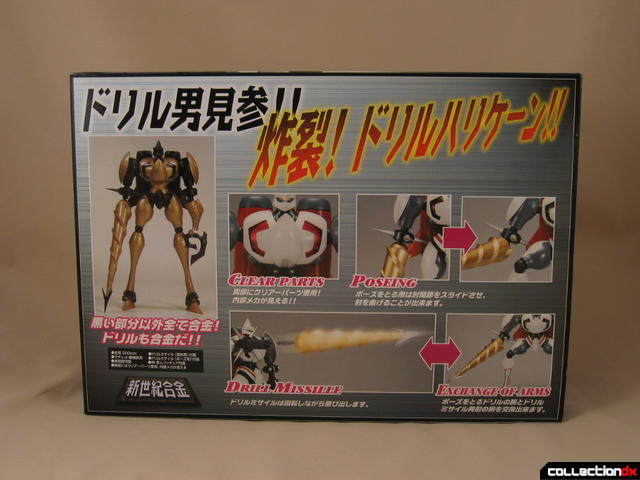 The back of the box features images of the toy, showing off its considerable diecast content and gimmicks. The layout of the back isn't as impressive as the front, but it's good 'nuff.

Upon opening the box, the collector is treated to the only packaging material worthy of heroic chogokin: styrofoam. Okay, there are probably plenty of cogent arguments against the use of styrofoam for environmental reasons, but lemme tell ya, this pretty much beats the dogsnot outta any SoC packaging. The plastic trays we’ve grown accustomed to with most modern toys are just throw-away items, lacking any thoughtfulness or creativity. They just add to the clutter. Aoshima takes us back to the old-school with squeaky styrofoam coffins to house your lustrous, glossy gokin. 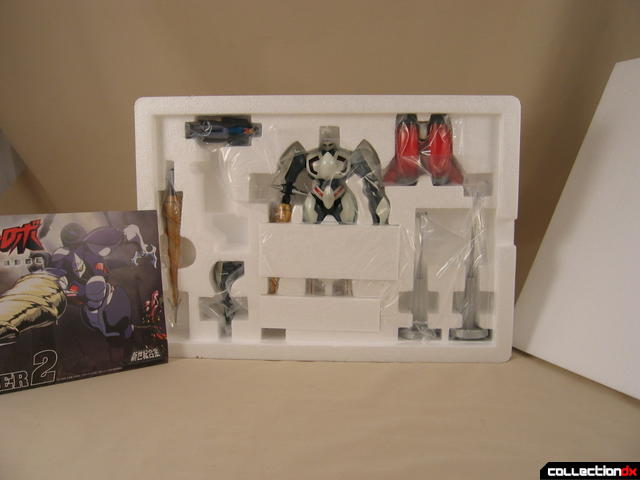 Once you’ve freed Shin Getter 2 from its tray, you have a decent, solid figure. The heft is impressive for the robot’s slender physique (remember, check out the back of the box to see what parts are diecast). The head is PVC and the firing drill, claw, and red jets on the back are all plastic. 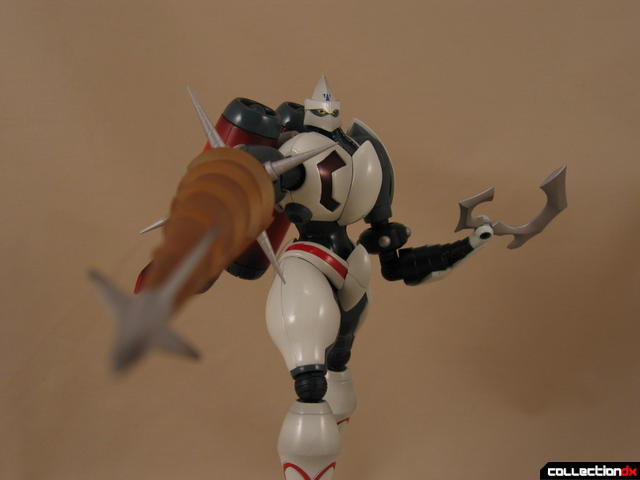 The sharp bits on the design are hard plastic and are very sharp! No, I’m not afraid of breaking them...I’m afraid of drawing blood! Also one detail of note: the translucent red plastic over the sculpted internal machine bits on the chest is WAY too dark to get a decent view of the stuff underneath...just a minor gripe.

Okay...so, how do the joints hold up? 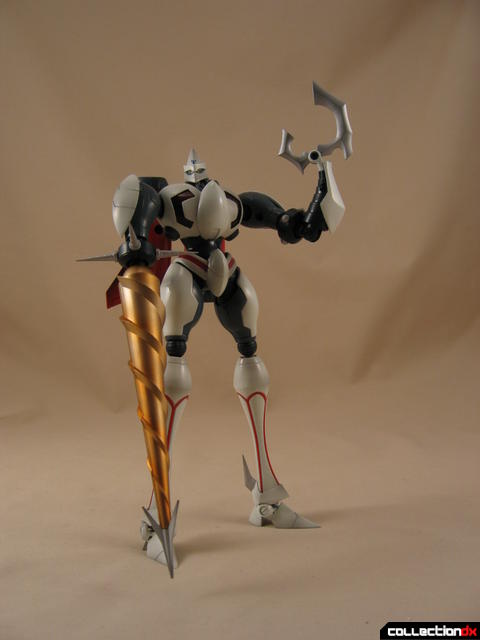 The answer is meh. Not horrible, mind you...just not particularly great. The ankles are ball-n-socket joints and the hips have a similar range of movement. The knees rotate and bend as expected. All of these joints are okay in terms of tightness. They seem to hold up to a decent amount of posing...but it’s tough to tell if they’ll always remain this way. If they ever wear down and their strength is ever compromised, the whole toy’s boned. There’s just too much weight up top. 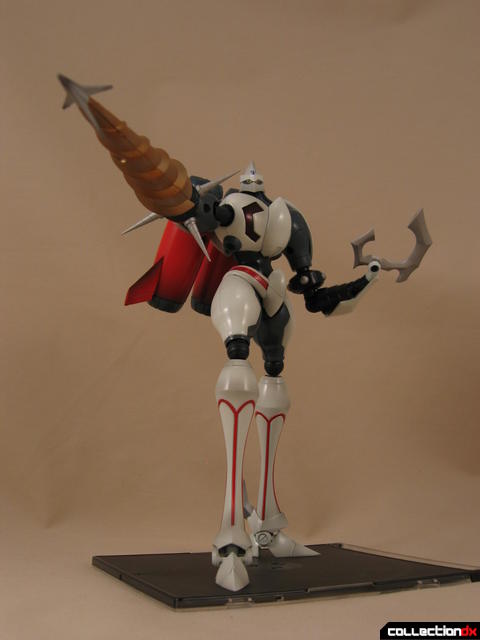 Notice that I had to stand Shin Getter 2 on a CD case in some of my pics. My light tent sits on top of a padded card table--way too mushy for this toy to balance solidly in the pose above. This annoyed me at first...but then again, that is a precarious position! As long as the toy’s on a hard, flat surface, it’s all good.

Moving on up, we have the love-em or hate-em classic Aoshima extending elbows! If you’re at all familiar with Mazinkaiser, Getter 1, or some of their other super robots, the actual elbow joints need to be exposed by pulling down on the forearms. 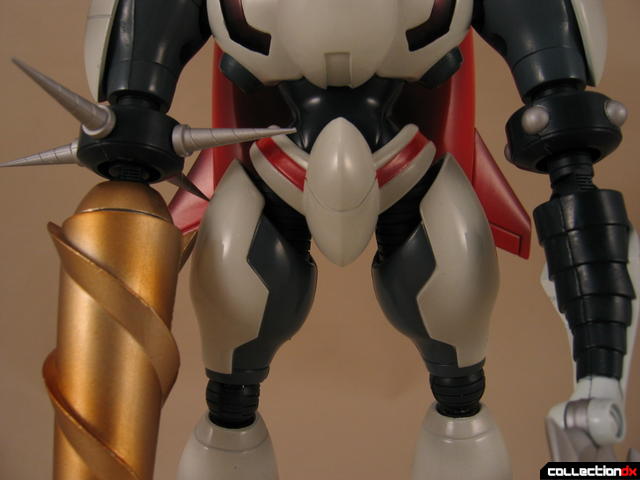 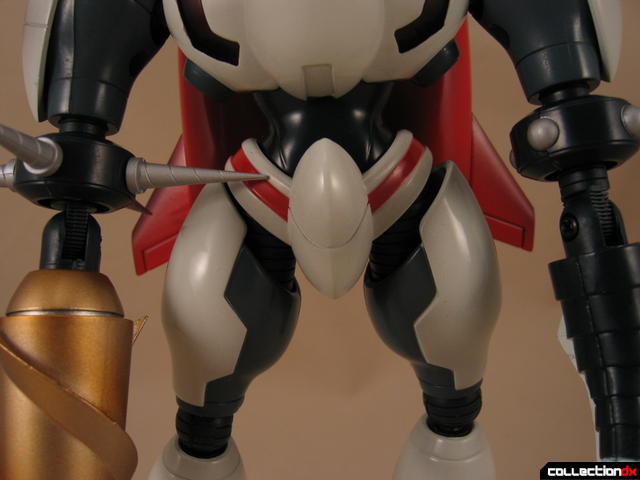 Hey, works for me--and these joints are extremely tight. The left-hand claw is nicely articulated; again, nice and tight. And next, we have the shoulders. These really impressed me: finally, we have actual detents. The detents are big, so we don’t get a super-wide range of motion, but they certainly get the job done. The toy comes with a small silver stand to help support the weight of the right-hand drill arm. I don’t have it pictured anywhere because you’ll never need it! The detents in the shoulders are super-strong--they won't droop even though the drill is diecast!

Lastly, the PVC head sits atop a ball joint. A few more points about articulation...first, the shoulder, while having detents when swinging front to back, actually don’t have any detents when swinging out to the side. Just a friction joint here that has mediocre strength. Next, Shin Getter 2’s red jets on his back are jointed...kind of a nice touch. And lastly, there’s no waist joint. Kind of an odd omission. Oh well. 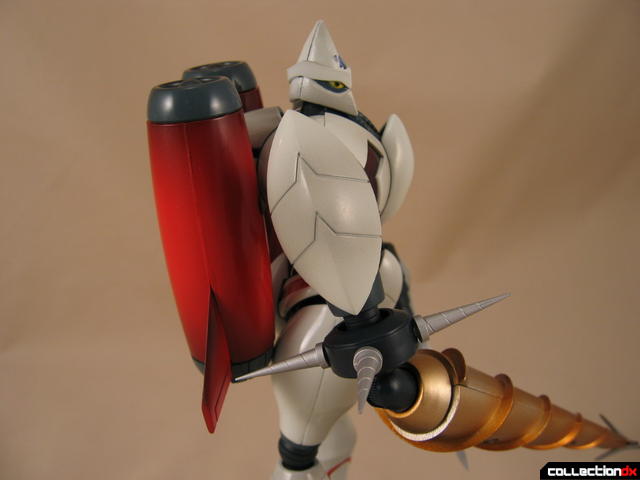 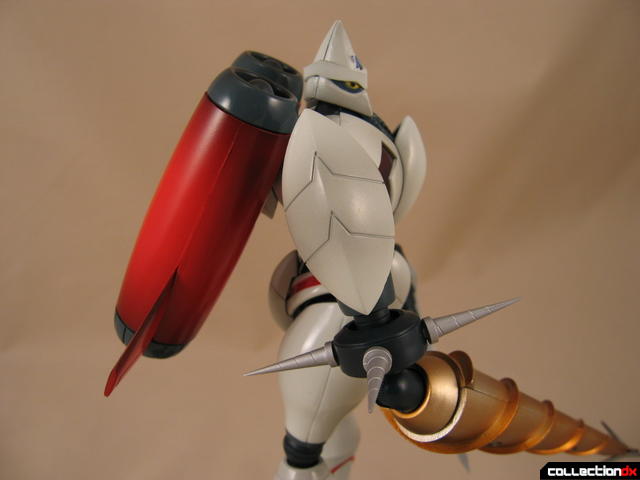 Next up, we have gimmicks. Well...not much to say here...unless you count the awesome diecast content as a "gimmick"! ;)

Okay...there IS one thing: the drill missile. Again, if you’re familiar with Aoshima’s previous Mazinkaiser offering, you know about the pathetic turbo smasher punch. Basically, you can remove the arms (at the shoulders) and replace them with shooty arms, featuring a gimmick where you basically screw the forearms on to store up rotational energy. When you hit the firing button, the forearms spin really fast as they shoot off...about 4 inches. Yeah. Sucks.

That accessory’s staying boxed away.

...Which brings us to our last category: accessories! Besides the aforementioned drill missile arm, the toy comes with two stands. The one I noted earlier for supporting the drill arm just isn’t necessary at all. The other one, however, is kinda neat. It fits right up in the robot’s crotch to help it keep balance on your shelf. Yeah, I know it looks uncomfortable, but it’s actually kinda cool. First, it’s a two-part, spring-loaded stand. The top half of the stand can be pushed into the wider bottom half, allowing for more dynamic posing of the toy, while still exerting a decent amount of pressure on his...cyber-prostate...to keep him upright! Also, the stand is actually magnetic so that it actually sticks...all up in there. Poor robot. 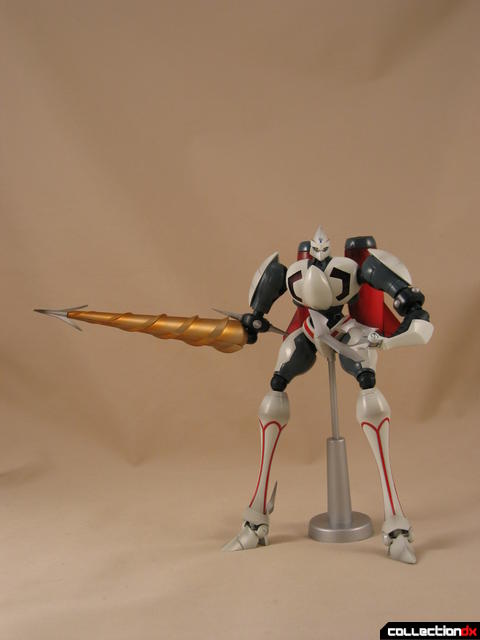 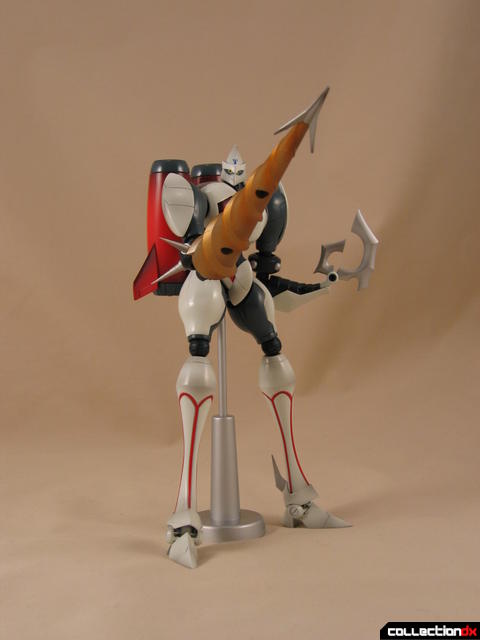 Lastly, we have a little, miserably-painted PVC figurine of Hayato, the main Shin Getter 2 pilot from the anime. The sculpt is mushy and lacks definition and the paint application is pretty awful...but really, who cares? Of everyone I know who has any of these toys, none of them even bothers displaying these figurines. ...I’m sure maybe someone, somewhere, gives a crap... 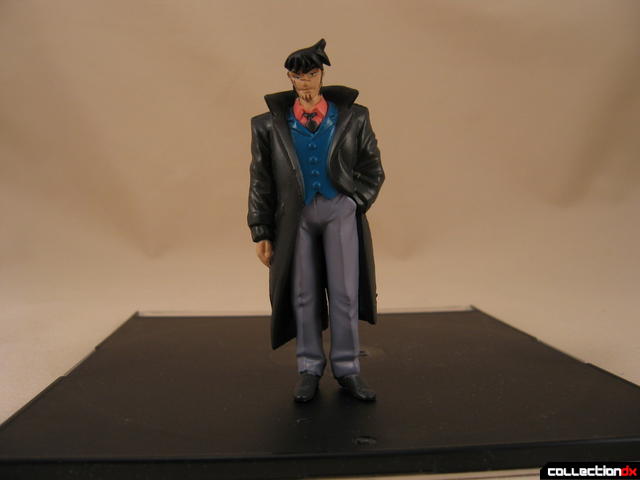 So, in the final analysis, we have a gorgeous toy, well in keeping with the look of the first Shin Getter 1 figure. The joints are subpar, and even a perhaps bit worrisome. Strong, fine detents--like in the Fewture Mazinger toy--would have been welcome in all the major joints of this figure because of its awkward distribution of weight. Still, it’s a good toy...at least alongside it’s more famous brother. And more importantly: this could be a sign that Aoshima is going to make a Shin Getter 3 to complete the set! And let's hope for some heavy diecast Get Machines, too! 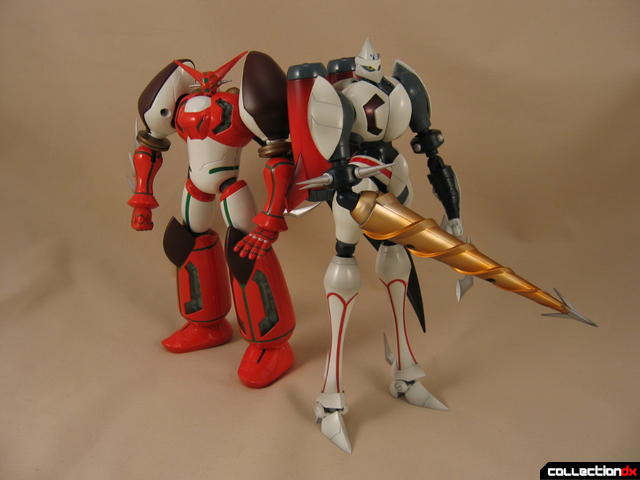 So...not everyone’s cup of tea, but if you’re a Getter fan, you pretty much need this, as there aren’t many quality toys of the secondary Getter robots. Get yours today from HLJ!

And also, I apologize for the dim photos and odd tint in the video...having some technical difficulties in the lab. Hope to have 'em cleared up for future reviews! Any and all feedback is welcome (on pic/vid quality, as well as the toy itself!).

I love the little PVC figurines that come with these toys. They give a sense of scale & they help to add interest.