Sankan-Oh (三冠王) is the second Brave Gokin release from CM’s Corporation from the show Ippatsuman. This toy is beautiful in almost every way – the only thing I don’t like about it is the price.

It’s clear the people at CM’s have a true love and respect for vintage gokin. While Bandai pumps out SOC with all the modern touches (and horrible packaging to go with it), CM’s seems to go the extra mile to make sure that their Brave Gokin toys will feel at home next your vintage gokin. It seems that no detail is overlooked in recreating a truly nostalgic experience. 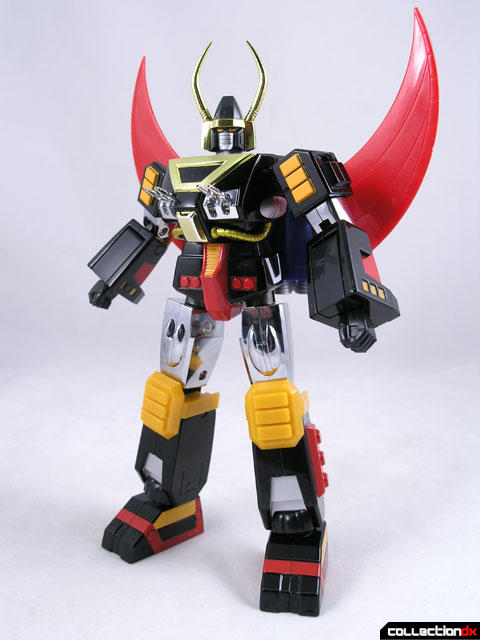 But that experience is not without a price. CM’s does not have the volume or resources that Bandai does. People bitch about the price but you are really getting an amazing toy filled with soul and craftsmanship. I’m sure if CM’s were as big as Bandai or produced toys in their numbers the price might be more in line with a mid-level SOC.  But CM’s is a smaller company, who largely make their living with PVC figures and racecars. This project is someone’s baby, and it shows. Thank god for the Brave Gokin line. You too can pray to the alter of Sankan -Oh by getting your own at HobbyLink Japan.

With each release the Brave Gokin toys seem to get better and better, and Sankan-Oh is no exception. This toy is, in a nutshell, awesome.

The toy comes in a similar box to that of the Gyakuten-Oh. I love it when a company keeps consistency in packaging. The toy inside is packed in an old-school Styrofoam tray. The only thing that reminds you that this toy was made in 2007 is that each part is additionally wrapped in plastic. 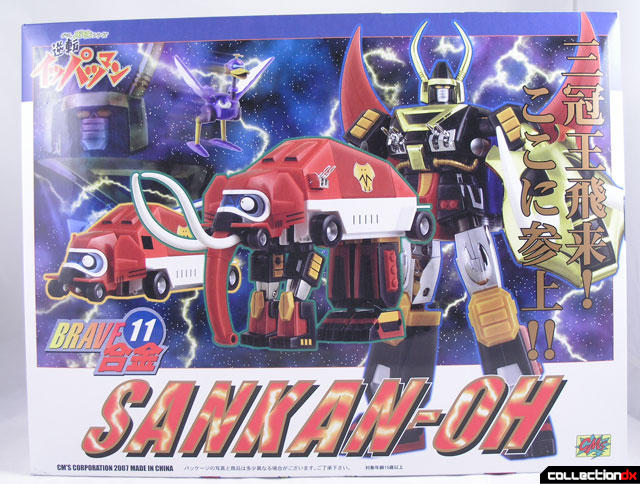 First of all – metal content. The amount of metal in this toy is staggering. Feet, legs, arms chest – all metal. Joints are tight and clicky. The hip joints are so tight that you at first think they are immobile. The knees click, the feet are tight. This thing rocks on so many levels. There is even a smooth waist joint. 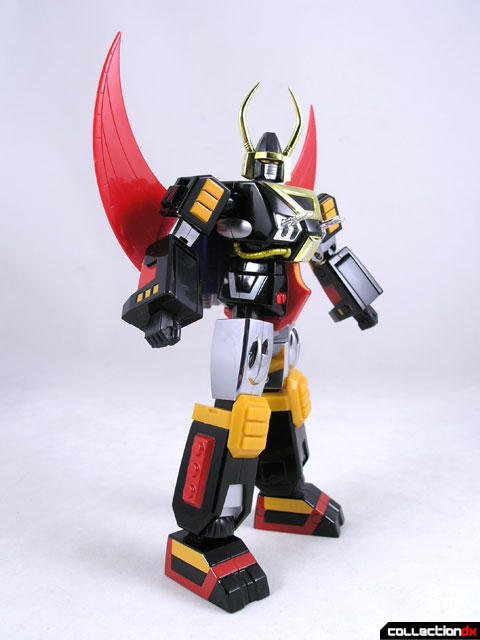 The chest features an opening cockpit with a removable figure. The two chrome sets of guns on the chest can move. The paint is clean and sharp. No flaws. None. 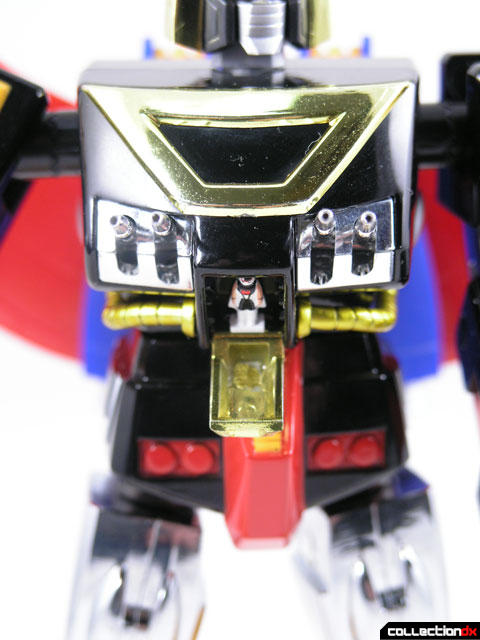 The head is attached to the back assembly, and is much more secure this time than on Gyakuten-Oh. The whole backpack assembly actually is removable, but we will get to that in a minute. 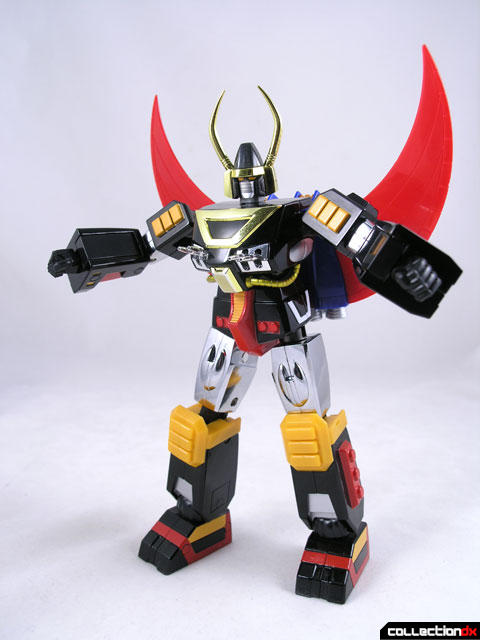 Included with Sankan-Oh is a ton of accessories. You get 3 sets of variant hands, a gun, axe, shield, a bird creature called “Sharekoube Dachou (シャレコーベダチョウ) ” and a vehicle called “Tokyu Mammoth (トッキュウマンモス) ”. 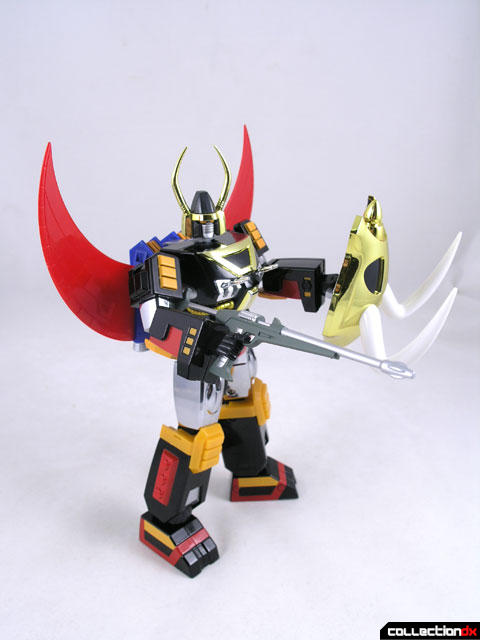 The gun, axe and shield can be held by the set of opening hands. The shield’s handle has pegs on it that hold it securely in place. The axe is very very shiny. 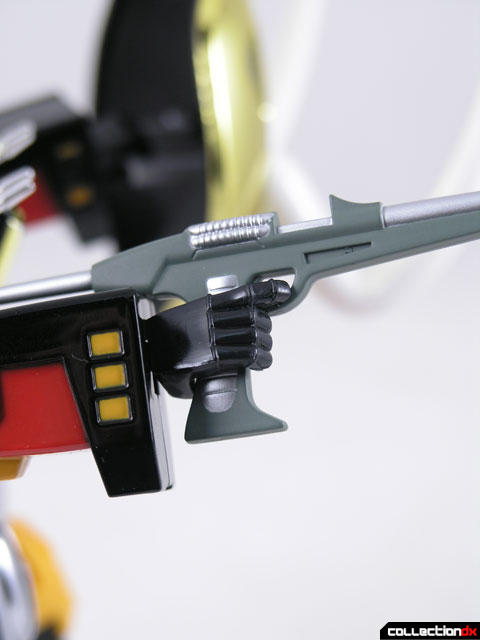 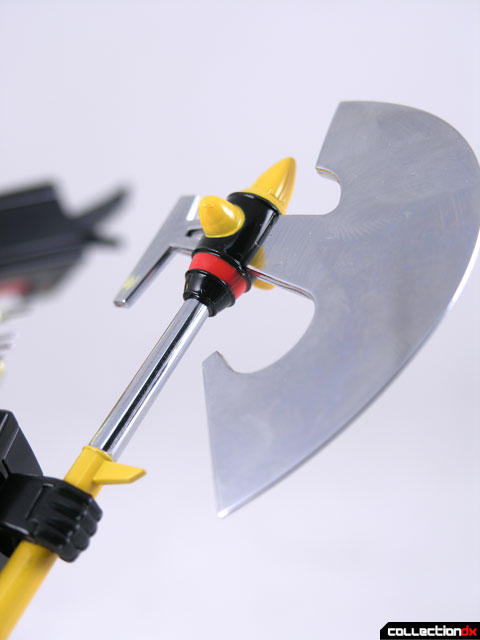 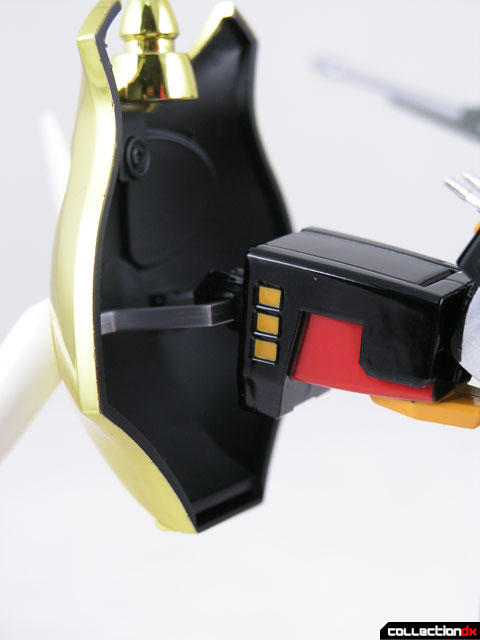 The wings of the back unit are actually removable and can combine to create a giant red weapon. The hands don’t really hold it all that well, but it is still cool. The wings are keyed in such a way that they can only go in one particular side. 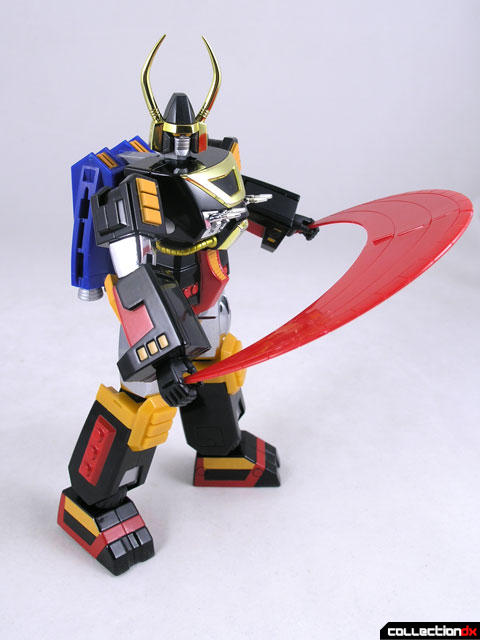 The Sharekoube Dachou is a purple bird that has articulated legs and a removable head. The top of the head appears to be a sort of “Escape Capsule”. 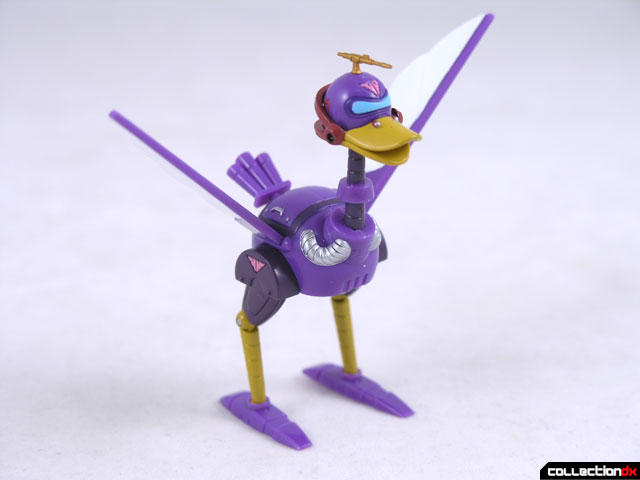 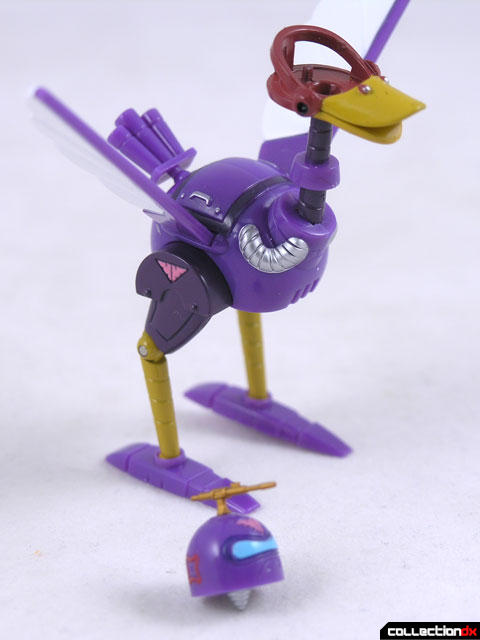 The Tokyu Mammoth is a large wheeled vehicle that can combine with Sankan-Oh. The Mammoth is all plastic. It first I really felt that it needed some metal, but once combined, I realize why it needs to be plastic. The transformation requires some tight tolerances that if both were metal, would result in paint chipping. 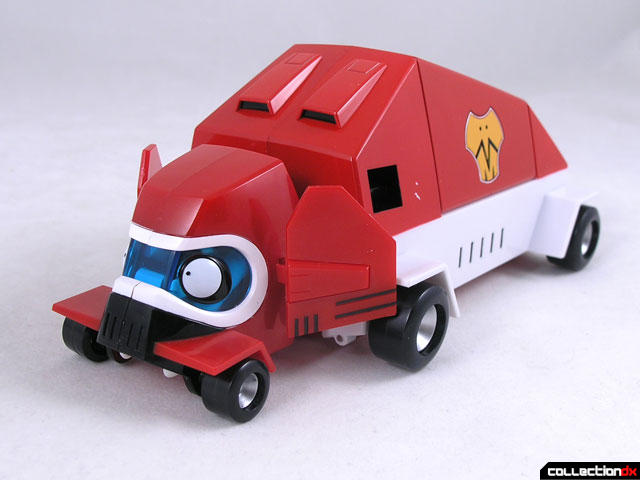 The wheels roll freely, and the bays on the back open up to create a platform for Sankan-Oh to ride on. 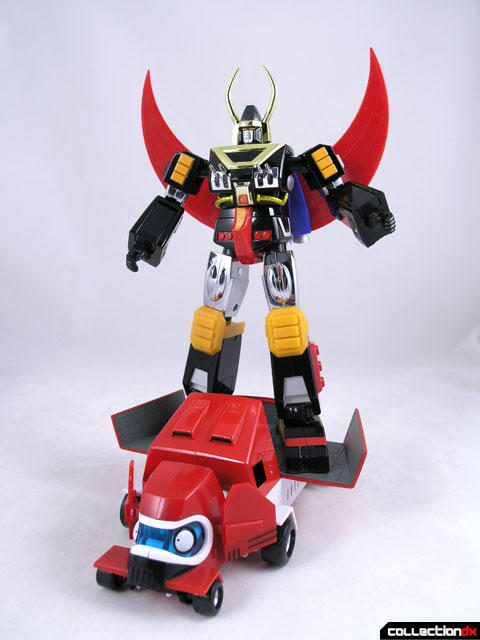 Combining the two is very simple and remarkably toy-like. It can be done in under a minute. The head and backpack assembly are removed from Sankan-Oh and become a ship called the Dangan Booster (弾丸ブースター号). This ship has moveable landing gear! 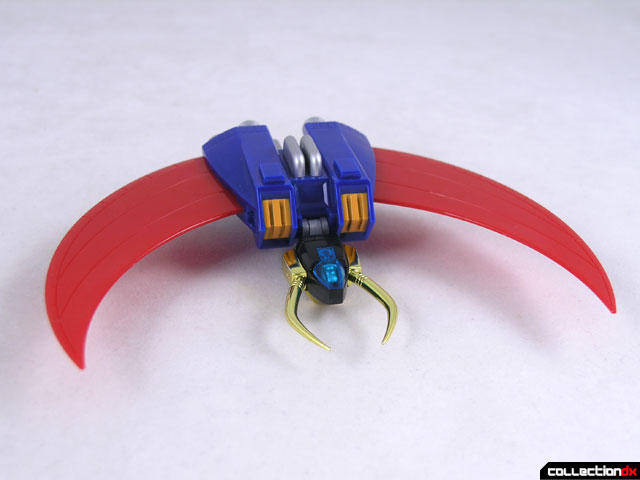 The chrome guns need to be removed from the chest of the robot, and the hands are folded into the forearms. The arms swing around the back and the legs are bent backwards. 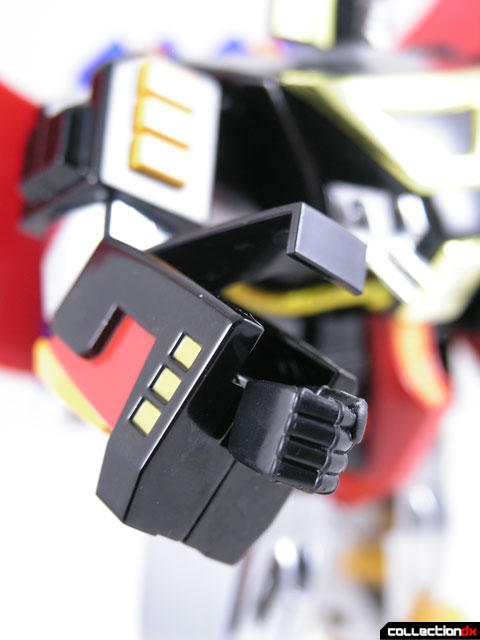 The doors on the bottom of the Tokyu Mammoth open outwards and the tusk and trunk of the mammoth are pulled out. The doors are then pushed inwards and the tail is pushed out. This shell then clips onto the body of Sankan-Oh. There are several connection points to ensure a secure connection. Remember those chrome guns you removed? Well CM’s included a different set cast in gray that get inserted into the side of the mammoth. 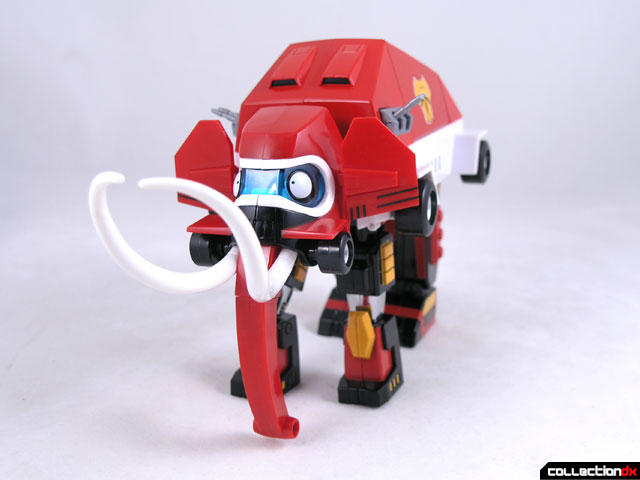 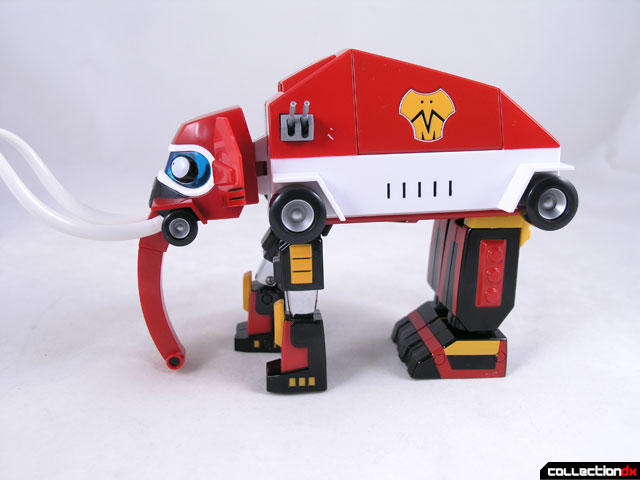 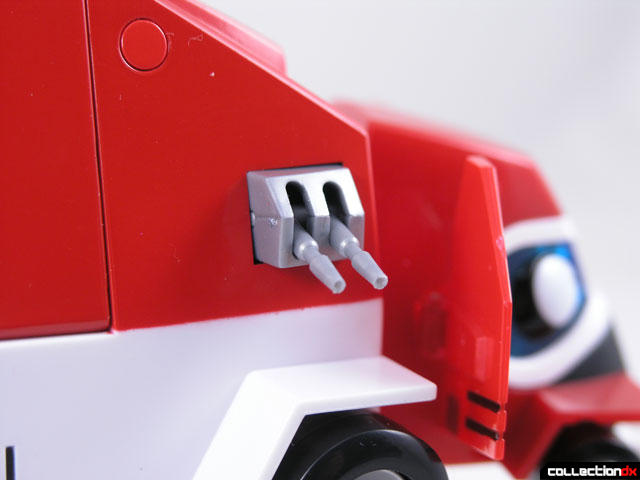 The combined mammoth is pretty cool, but it doesn’t do much. The head and ears can move, and the trunk can swivel. There is a small ladder that can attach to the end of the trunk to simulate an entrance into the Mammoth. 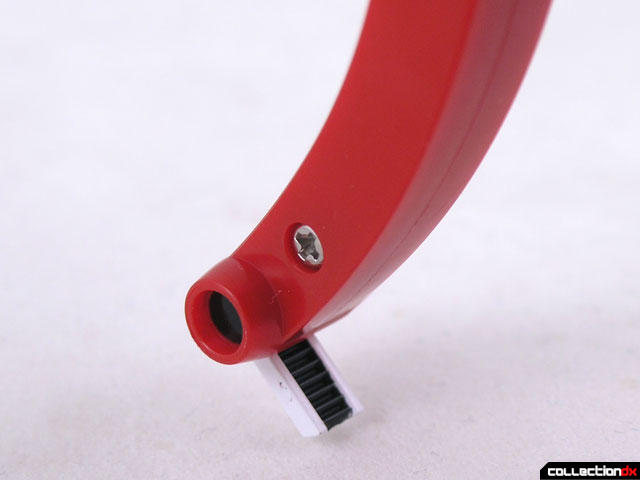 Parts from Sankan-oh are interchangable with Gyakuten-Oh. You can swap heads and even the back unit! 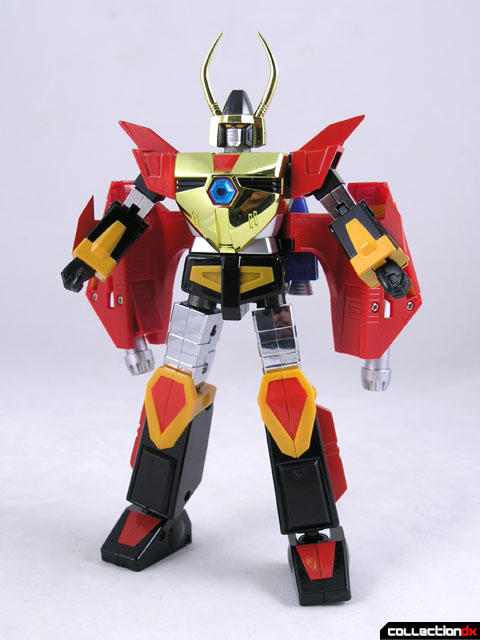 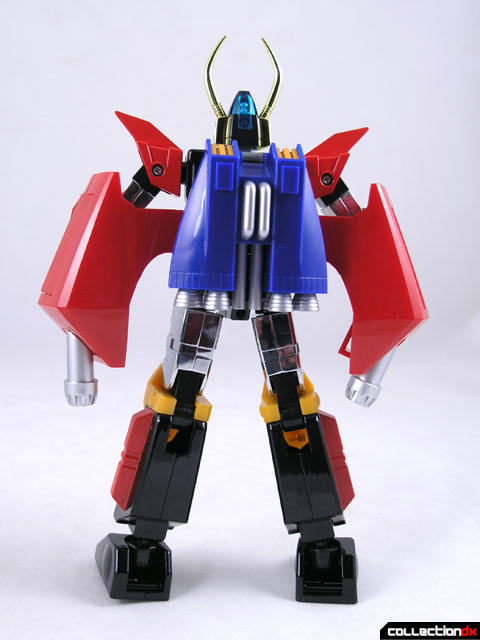 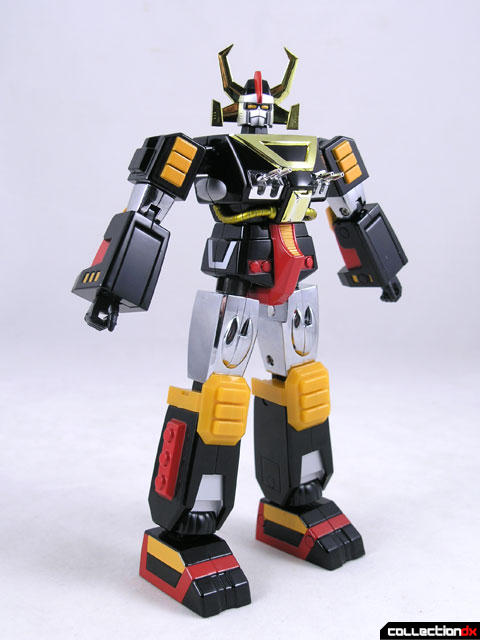 It’s all a little silly, isn’t it? A giant mammoth that houses a super robot, a purple mechanical bird with an escape pod? Ippatsuman (like all othe other Time Bokan series) was a silly show, but it had great mechanical designs done by Kunio Ohkawara (Gundam, Dougram). In fact, when you have the head and backpack removed, the torso looks incredibly like a Dougram in proportions. 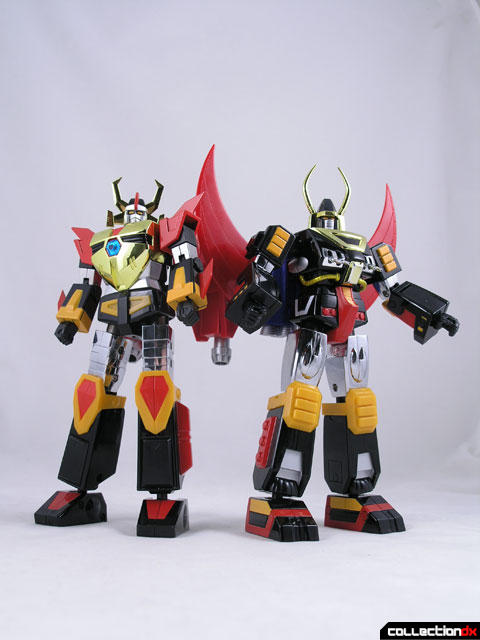 So yeah, this thing rocks. But the price makes my wallet cry. I think it is worth it though, so if you can afford it I say go for it. Get yours at HobbyLink Japan.

This looks like a really beautiful figure. IMHO it has a real style to it that the SOC series and other gokins lack. Maybe it's the shiny thighs.

How does it compares to Gyakuten-Oh?

Just bought this today !
Very shiny and lots of colors, best display against a simple background I think.
Its metal content is pretty fantastic, a bit less fantastic is the fact I've (already) managed to brake off the handle on the shield...
But other than that it's fantastic !

Two years from when I first commented, I finally own the toy. Absolutely beautiful, and very tightly engineered. The only thing I have resembling a complaint is that the tiny chest cannons are held weakly, and so the turret tends to point downward. However, the rest of the toy is so well done that it's hard to be bothered.

Be careful with the tiny pilot. Plug him into the cockpit ASOP, or scotch-tape it to the accessory tray so you don't misplace him.

I accidentally flicked the pilot away when taking a close look, and it took me a good 15 minutes to find him again. He somehow ended up in the pocket of a coat hang on my wall. I don't know what kind of freak trajectory led to his falling there.

The mammoth-mobile is surprisingly sturdy; and the backpack-plane's tiny landing gears are charming.