At this point I think most of our readers know what to expect from a Revoltech figure; above average sculpting, high level of poseability, and a decent price point. There good, cheap, robot lovin’ fun. 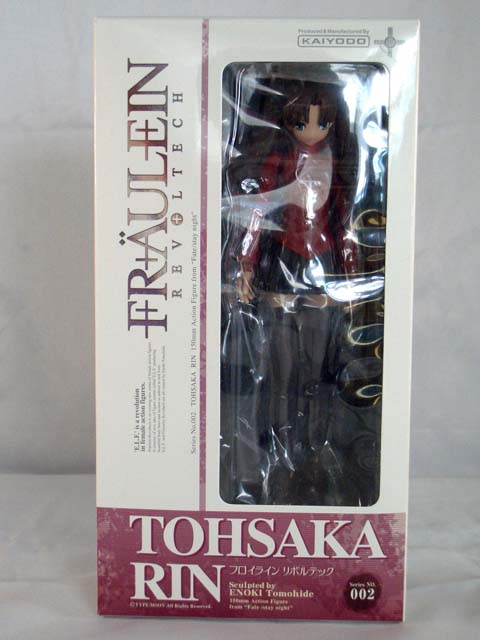 But Kaiyodo was not content to keep it to just robots and has launched the Fraulein line to encompass popular female anime characters. Since I’m not much of a fan of the series I passed on those but decided to give Rin Tohsaka from the animated series “Fate/stay night” a try. 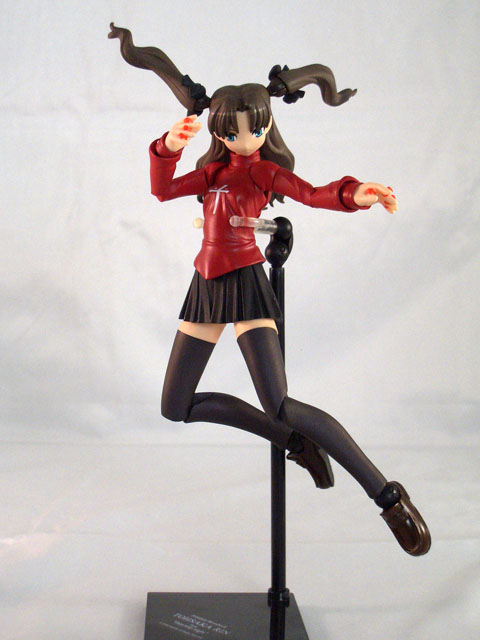 From the package: Fraulein Revoltech is an exciting new series of female action figures. It consists of new idea of figure system called “E.L.F.” producing beautiful body lines and motion as natural as real lives. 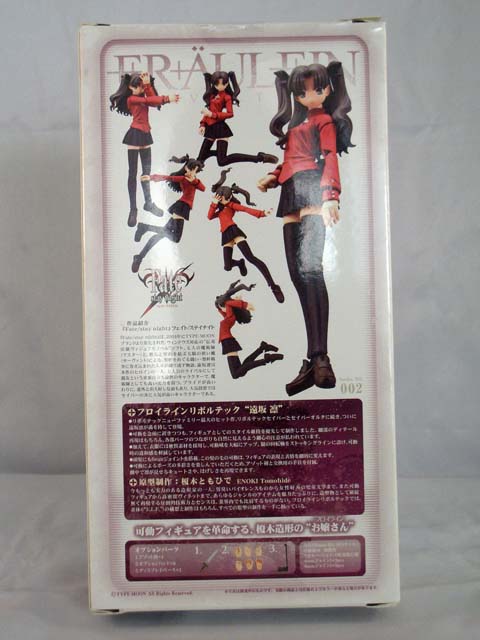 So basically no matter how sophisticated the packaging is and no matter how high profile the line is, it’s a series of “girly” figures. No ifs, ands, or buts about it.

This girly figure is Rin Tohsaka from the series Fate/stay night. Now I only recently watched a handful of episodes of the series so I can’t speak too much to it but essentially it centers on the coming “Holy Grail War” and the Magi involved in finding the Grail and winning the war. Each Mage conjures a servant to fight for them. Rin is not only a high school student but apparently a very powerful Mage. 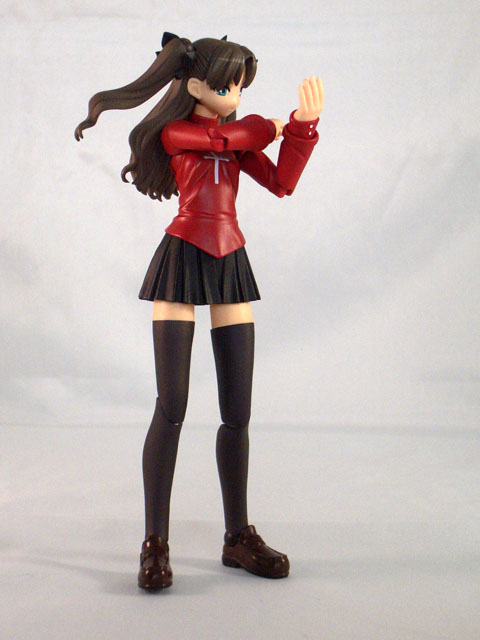 So with all that said, “How’s the figure?” Not bad. It’s very poseable with an excellent level of detail; I do find it odd that for all its poseability you can’t get the figure to go into a sitting position. Other than that, the sky is the limit as far as poses go. Her pigtails even have Revoltech joints in them. 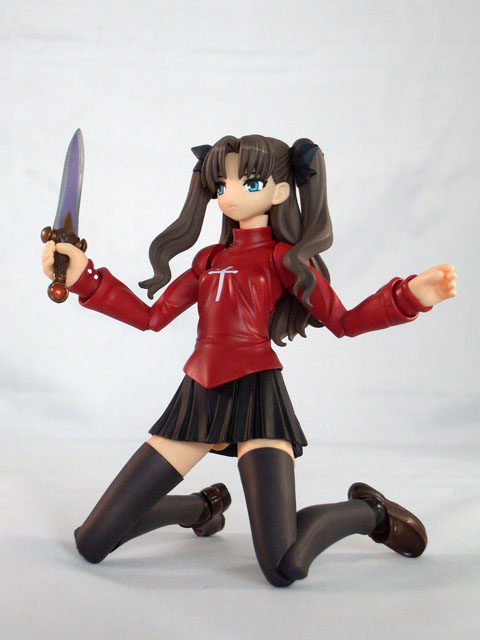 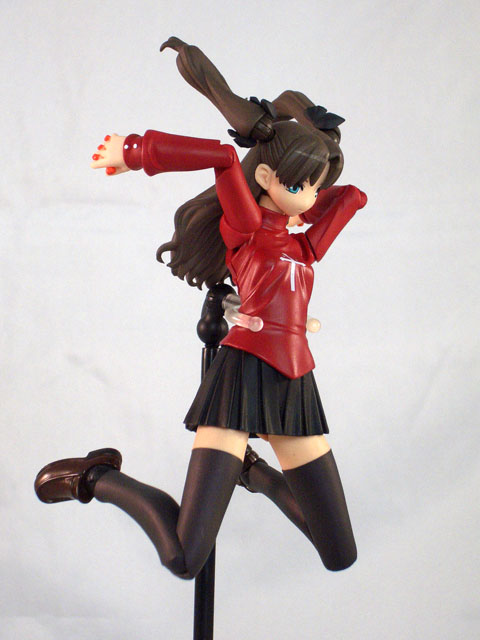 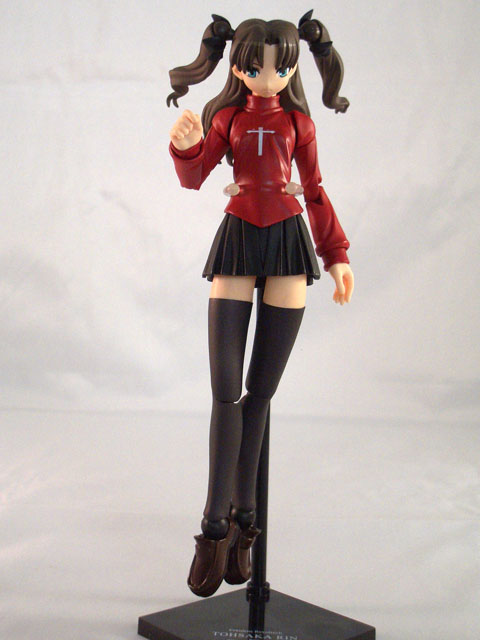 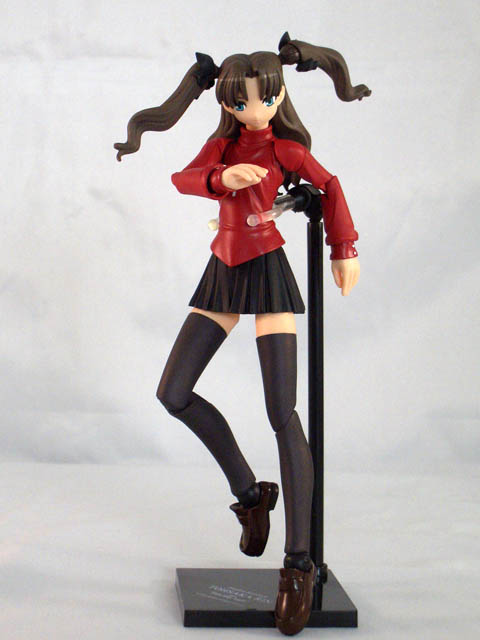 Since Rin is primarily a spell caster she doesn’t have a ton of accessories. The figure comes with a fantastic stand to pose the character flying/midair (which she does quite often in the first few episodes I saw), a sword and some alternate hands. 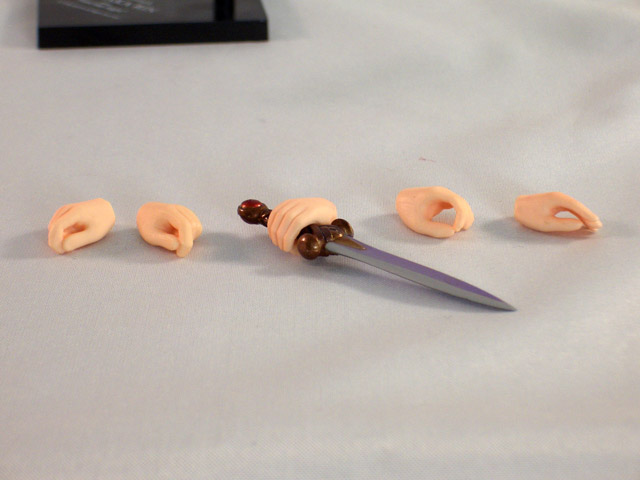 Overall it’s more Revoltech goodness with no real surprises or disappointments for collectors of the line. With that said, I really don’t think this is a figure for non-Fate fans because as a “girly” figure (yes you can look up her skirt, yes she has panties on…) it’s pretty tame for those that collect those things and obviously Rin doesn’t transform into a giant robot or a jet I think it’s a pass for most Revoltech collectors. Fate fans however can and should buy Rin with confidence. 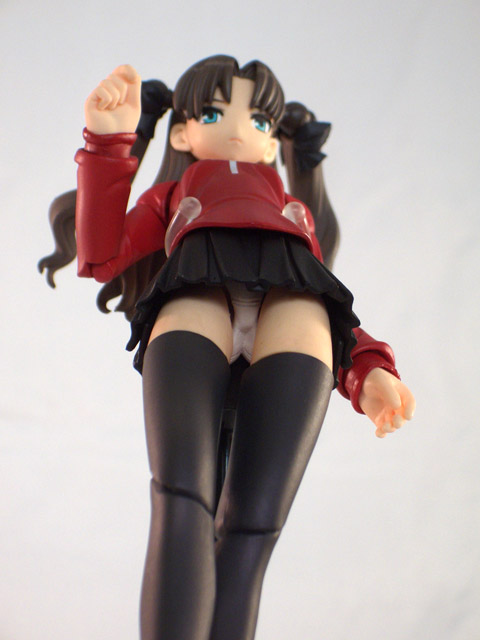 Yep, I felt like a pervert for shooting this picture...

He's a perv? So what am I supposed to say, I once took a picture of Energon Prime's crotch like that (to show why I hate that front bumper of his alt mode that decreases his leg poseability, of course) :)

Nice gallery, man. I think the standard Revoltech stands are better, though- they're not that visible from the front...