This is another fine Kotobukiya model kit from their Armored Core series, but aside from the visual design, it's more of the same. 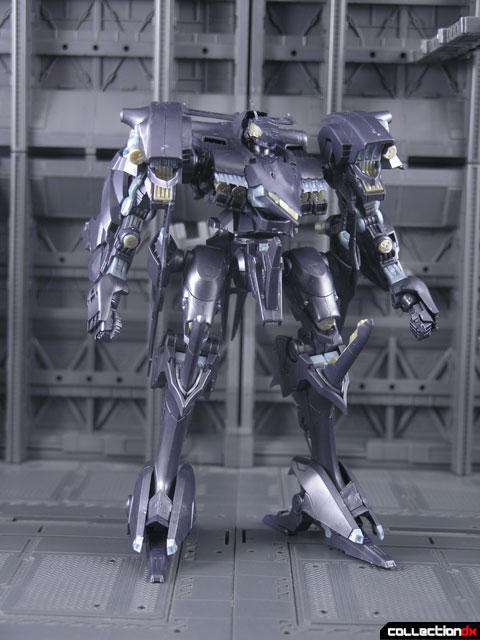 The kit comes molded in color, using different colors for different sprues. There is no painted detail on any parts. Any highlight detail is molded in its own color, and is assembled separately. 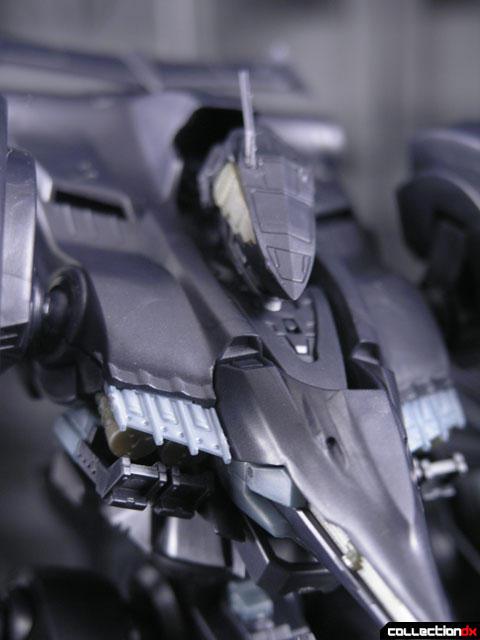 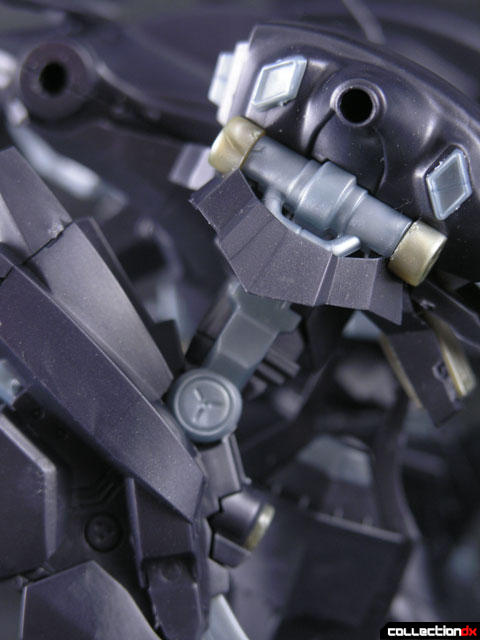 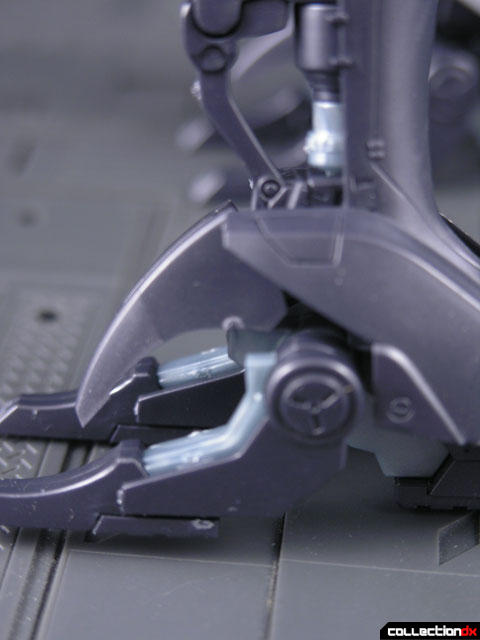 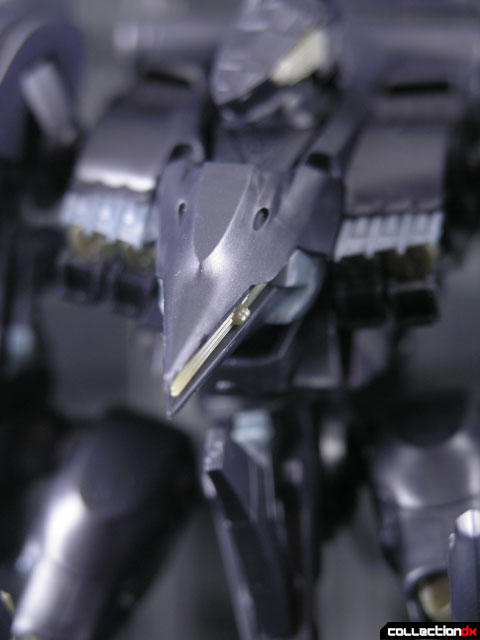 No glue is required, but with some of the smaller parts, it helps. The toy is assembled in a similar way to the other kits. 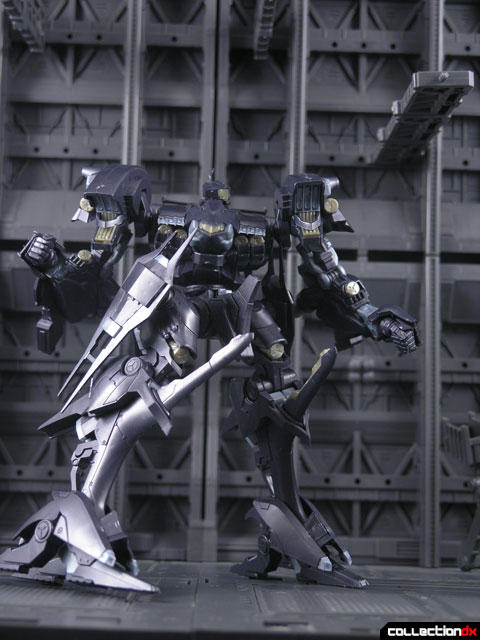 The build goes like this: first the shoulders, then the arms, followed by the legs and then the feet. After that, it's the waist, torso and then head. This is all topped off by the weaponry. If there's one complaint about this series of kits, is that if you have done one there are no surprises with the next. 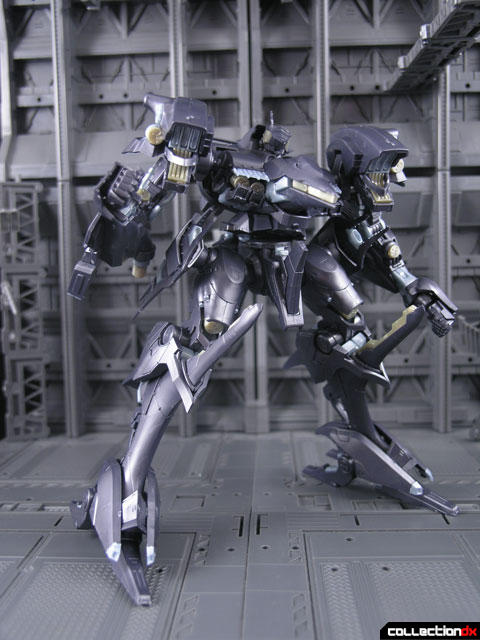 What sets these kits apart from each other is the styling. The Rayleonard 03-Aaliyah is a slick black fighting machine. This one has sharper points than the other kits I have reviewed in the series. 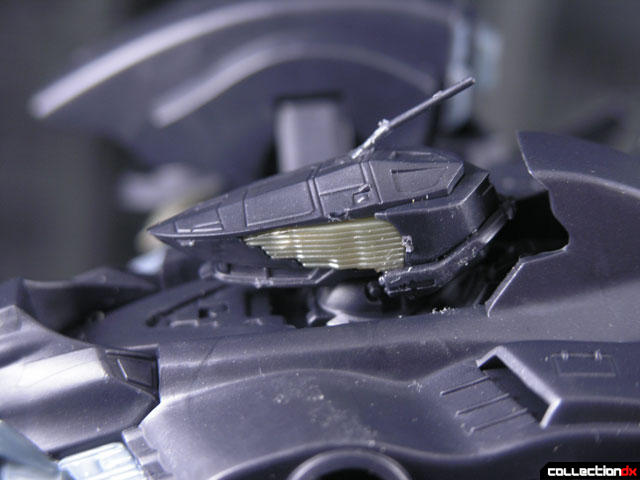 As dynamic as the design is, it limits the articulation. The model does not lack for joints, but the extreme joint sections protrude in such a way that it limits what you can do with it.

There are some neat features on the model, such as the opening panel on the back. 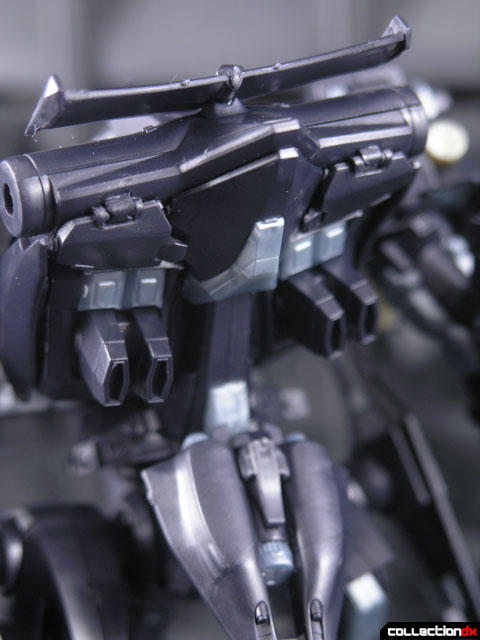 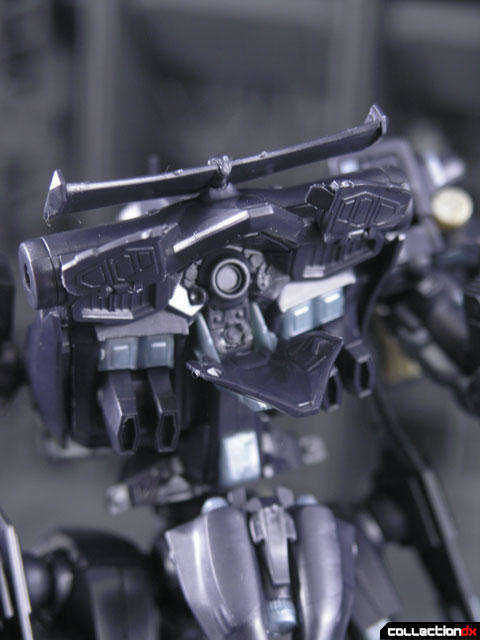 On my specimen one of my shoulder cups have a tendency to come out. Not a big deal, it was probably a build error on my part, but it's something to keep an eye out for. 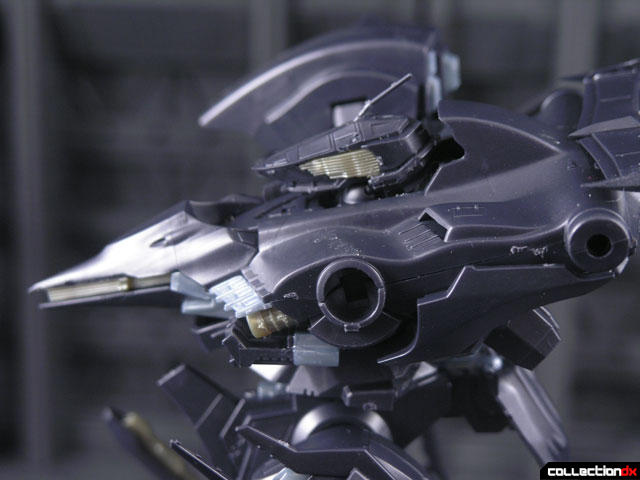 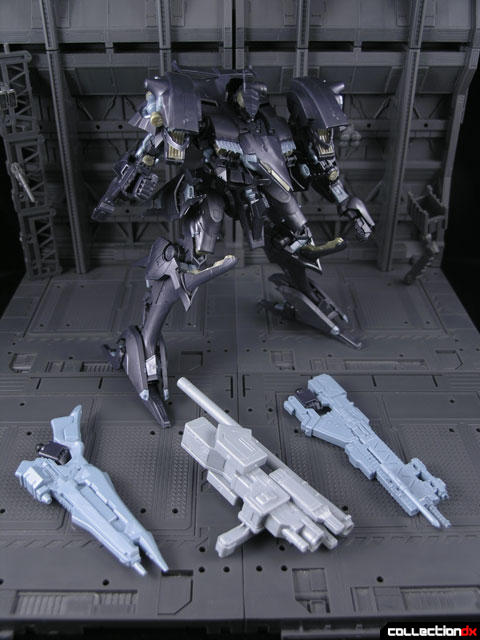 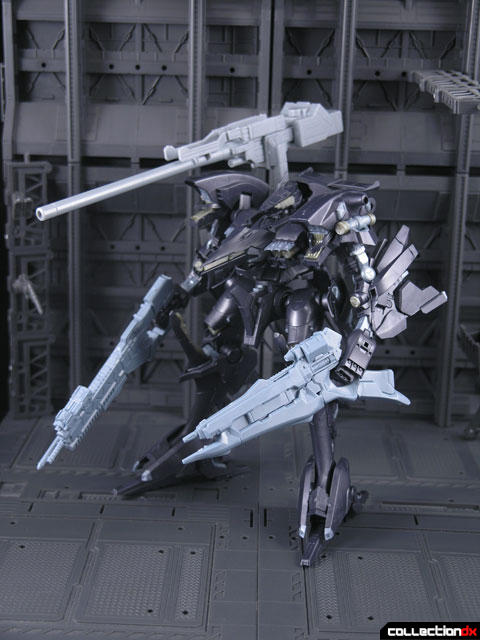 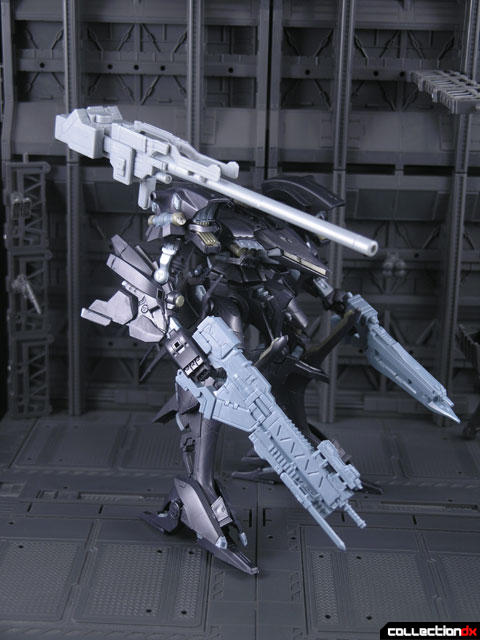 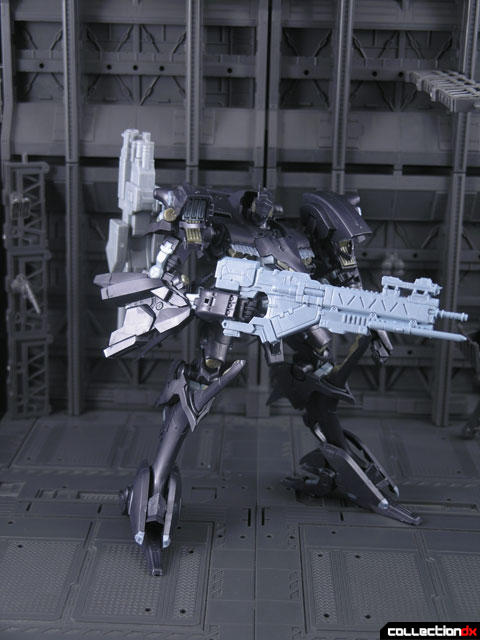 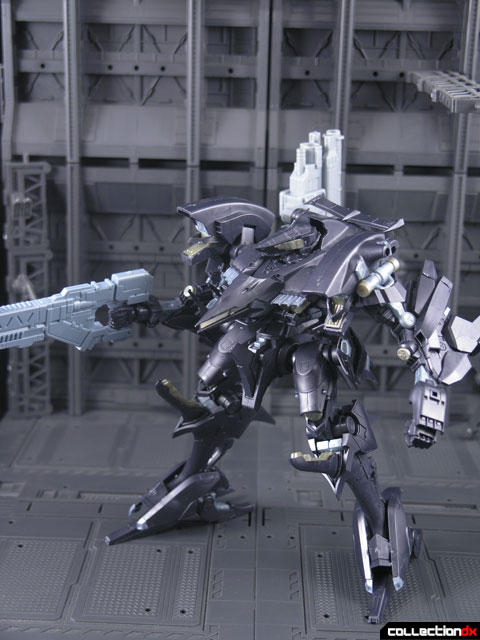 It's a fun enough kit, that is solid when built, and it's a great entry into the line. As an added bonus, each part, including limbs and accessories, are interchangeable with other Armored Core kits. I just wish they would mix up the build a bit more. 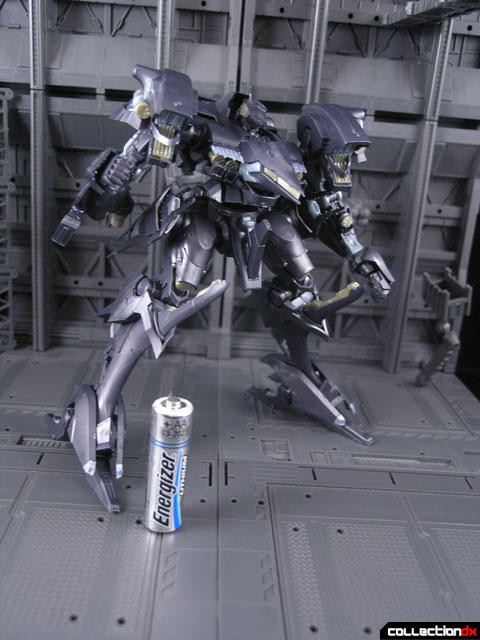 Playing Armored Core 4 Answer has made me really want to get some of these guys because they look really nice. I have to constantly remind myself to wait for a toy version.

Hopefully someone will make a sweet White Glint toy.

I'd be inclined to assume they have no intention of making expensive toys when the kits do so well... look at the SRW stuff. Lots of successful kits, a couple crappy toys that get panned. Why bother? The kits with the customization make much more sense for AC anyway.

I just want to know why the Armored Core designs got so ugly? I played some of the first AC game on PSX and always wanted to go back to it, but the analog-stick-less controls drove me nuts. The blocky mechs were sweet tho.

Introducing Prometheus Rising Studio:
http://prometheusrising.wordpress.com/
Check out my blog and store, and keep an eye out for a big announcement!

Shoji Kawamori was the mechanical designer for AC1 and AC2. After that they switch primarily to in-house designers. White Glint is a Kawamori design though.

there are toys for srw but the main problem is probably finding it as most are rare and believe me it hurts when one of your favorite designs can't be found, i.e. the angelg from advance and og2, because it's a resin kit most of us can't get it unless we are in japan. as for controls man since i began with the nes i've got no problems using directional pads man

The swirly metallic colored plastic in some of the Koto AC kits really turn me off. I wish they'd produce some more variants in smooth, matte colors.

@Prometheum5: You might be in luck; I'm pretty sure one of the more recent Model Graphix had a test shot pic of a blockier AC model. Maybe something from AC5. In the meantime, you might look at some of the Border Break models - they hearken back to a late-'80s/early-'90s design aesthetic.

@VF5SS HLJ has a couple of White Glints

I mean I want a toy of White Glint.

Although that D-formation is adorable.