With the Decepticons en route to recover their leader Megatron, and the discovery of the long-lost AllSpark Cube, the military forms an improvised plan to race to Mission City to hide the Cube from the hostile alien robots by shielding it with the technology of the city, and then evacuate the Cube via helicopter to another location while they are distracted. Once there, they are ambushed by several Decepticons including the revitalized Megatron. During the battle- no longer isolated from the outside world by Hoover Dam- the Cube accidentally comes into contact with the ground, and spreads its mysterious life-giving energy across the city, turning everyday electronic items into more Cybertronians… Real Gear Robots! After the Mission City battle, many of the smaller newly-created robots manage to escape out of the city limits, but some are picked-up by hidden Autobots and Decepticons, and then used as spies and scouts to find each other- using their disguised forms to trick humans into carrying them wherever they need to go. 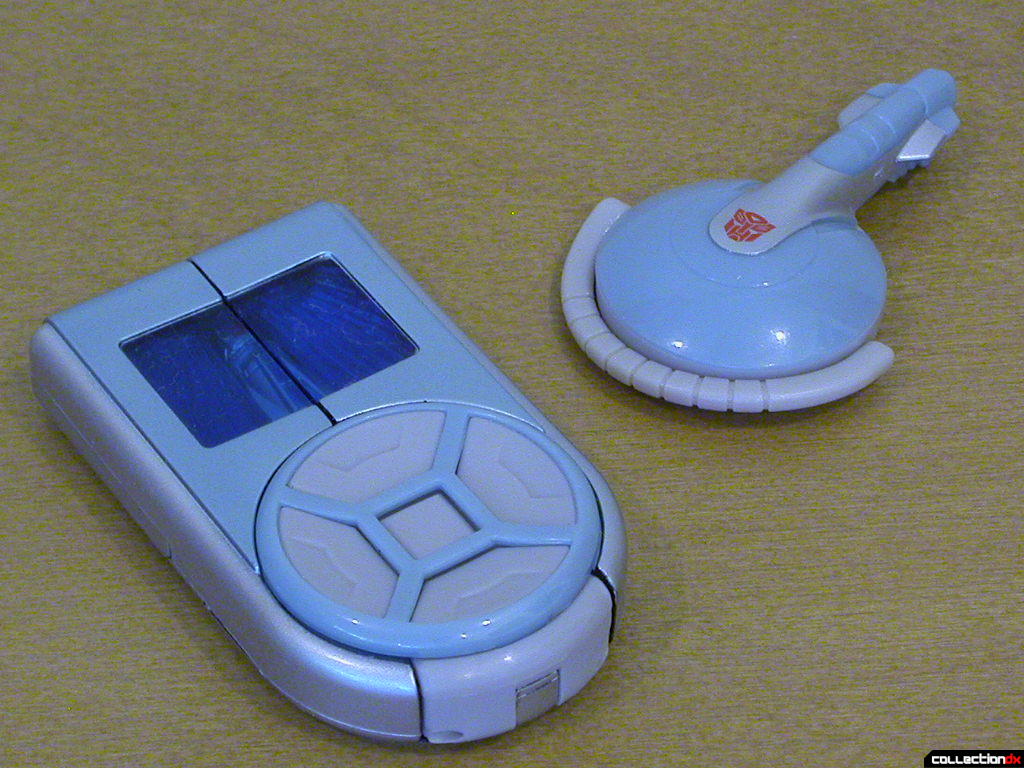 Autobot Night Beat 7 is a repaint of the earlier-released Decepticon Booster X10.

Night Beat 7’s disguise mode is the only other set in the Real Gear Robots line that is composed of two separate parts- a small light blue, light gray and silver MP3 multimedia player (back), and a single cordless earpiece. The non-functioning MP3 player is just a block of plastic parts with a rectangular transparent-blue window on the forward half, and a generic five-button keypad below. The window exposes some of the robot mode’s parts. The MP3 player itself has no function on its own, though I will say that looking at it from a distance, you could easily mistake is for the real deal.

The earpiece (back) is the ‘special’ feature of the disguise mode, though it, too, is non-functional. A semi-flexible rubber clip similar to that of many hands-free/cordless earpieces used for phones wraps around the back of it. Unlike Booster X10, Night Beat 7’s name does not appear on top of it, but a red Autobot symbol is printed on top. And it operates along the same principle- clip the toy to your ear by slipping the rubber between your right ear and head, with the plastic earpiece flush against the outside of your right ear; nothing goes inside the ear. Admittedly, the small light blue & silver projection from the earpiece suggests more of a cordless phone earpiece since it looks like a mini-microphone. On kids it will looks fine, but on adult collectors, the earpiece may look a bit out of proportion. What are ya gonna do, ya know? 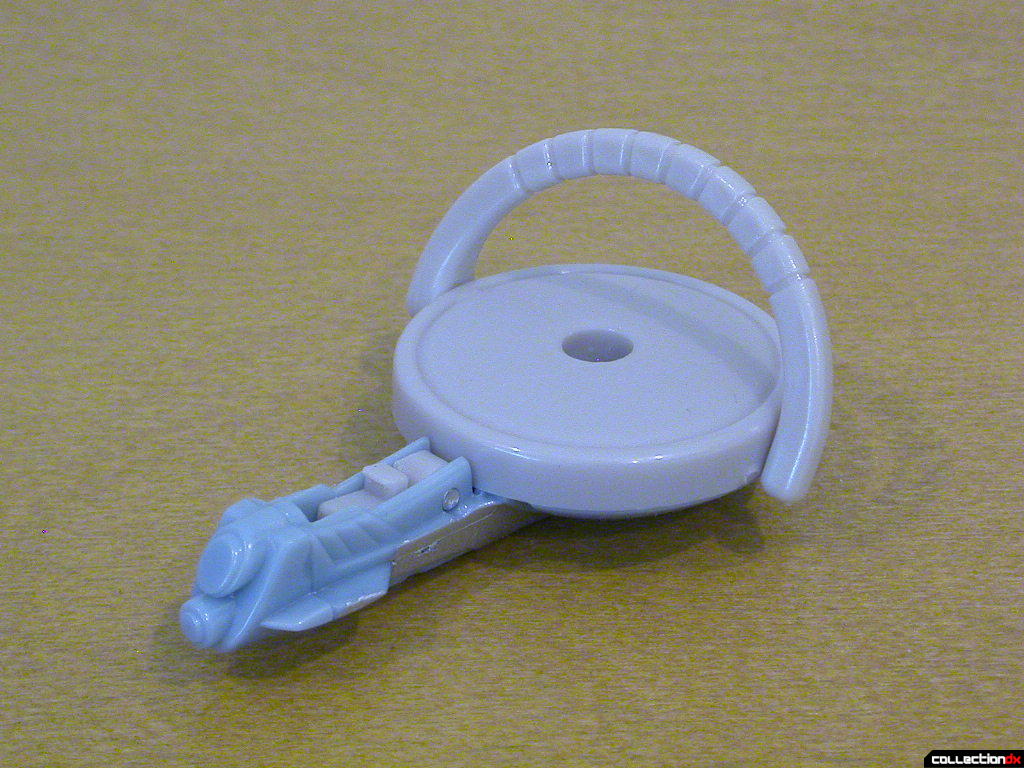 (That I am aware of, most portable MP3 players do not use cordless earpieces, as they would get lost too easily…)

Transforming him is a piece of cake- very simple to understand, very simple to execute. The only complaint I have in the entire toy is in rotating out those bird legs underneath! This is really the only place where his size works against him. While putting them back in isn’t a problem, slipping them out of position to transform him is more nuisance than problem. Was Night Beat 7 only slightly bigger…

Since the Real Gear Robots line was inspired by events near the end of the 2007 film, but is not directly affected by it, and because of their relative size, there is no ‘Automorph Technology’ feature. No loss there. If anything, I don’t see how they could have incorporated one into Night Beat 7, and I think it was good for them not to try it. 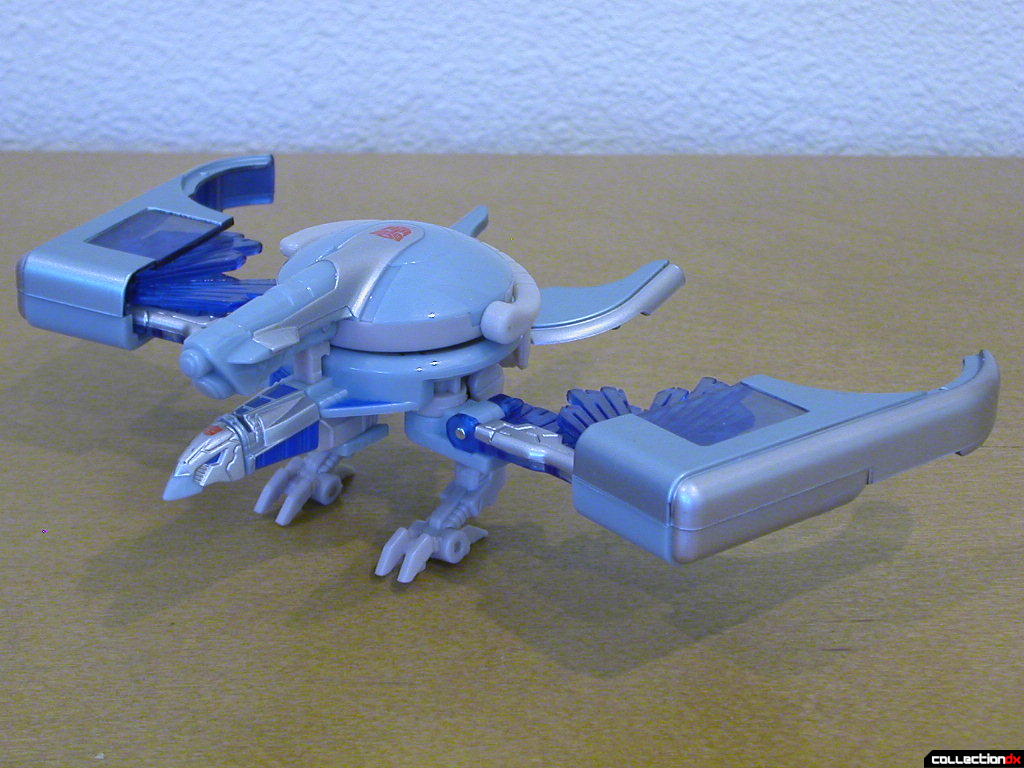 Being a repaint, Night Beat 7’s beast mode (back) shares the structure of Booster X10, and so shares the traits that make the Decepticon similar to the G1 character Laserbeak, though with different coloring. It is also not a straight swap for colors either. Whereas Booster X10 had silver lining the black buttons of his disguise mode, Night Beat 7’s body is light blue with regular blue painted on. Also, Booster X10’s eyes and beak were painted yellow- the only contrast on that toy; on Night Beat 7, his eyes are painted blue, but his beak remains the natural coloring of the light blue plastic beneath it with silver highlights for the rest of the head. Booster X10’s tail was all red paint over the transparent orange plastic, but Night Beat 7’s transparent blue tail is painted light blue and highlighted with a second color, silver.

Night Beat 7 has a narrow streamlined head & neck with a red Autobot symbol printed on top of it, two thin light gray legs with claws, and the earpiece forms the bulk of the upper body with a light blue & silver double-barrel cannon projecting from it. His wings are made up of the split outer casing of the MP3 player. Inside are two pairs of transparent blue wing parts that swivel out as the wings are extended to full length; these blue parts have a feathered or flowing-energy mold that fill the space between the outer wing parts and the body nicely. The tail is the flat, curved casing from beneath the keypad, and has some tech details underneath. Since his main body is now molded in light gray, it is easier to see the molded tech details in the ABS under his body between his legs, shoulders, tail, and neck. Like Booster X10 before him, Night Beat 7 has a red Autobot symbol on his forehead; and the larger red Autobot symbol is still visible on his back.

Poseability is different here because Night Beat 7 is a bird. The wings are jointed at the shoulders, and can only snap to 45-degrees. But, due to how he changes, the wings can also slide forward in various ways. (The feathered parts can move, but they only slide out a specified distance when transforming, so they can’t really be used for posing.) The tail can shift up and down, but, again, this is due to how he transforms. The legs have good range of motion, with joints at the hips, knees, and ankles for good posing options. (The hip joints on mine are a bit loose, so he has a tendency to droop over time.) Someone pointed out to me that you can twist his neck around its center axis, so that you can give him (or rather he can give you) a quizzical look. Though the head is a separate part before he’s assembled in the factory, it cannot be twisted. The cannon mount on top can certainly be removed, but… why would you want to?

One other thing I should point out that took me by surprise was that the few screws holding him together have been covered up, specifically on the wings! This is a very unexpected touch, but certainly appreciated, and adds all the more to the illusion that this is a “real” electronic device. So, when in disguise mode, he has no screws showing! (In beast mode, the single screw keeping the earpiece together is hidden, so I don’t count it.)

Simple and fun. That is the mission of the Real Gear Robots line, and this toy accomplishes that very well. Plus he looks good, and changes easily. Things to change? Honestly, I can’t find anything that I would change! I can understand why it’s a little tricky to unfurl his legs, but that, again, is due to his size. It’s not very glamorous in beast mode, but the functionality, detail, and aura more than makes up for it. He is a fair design for a repaint, though I thought the color pallet was a bit bland with all these different colors relating to blue; it might work on another toy, but not really this one. Considering the popularity of personal multimedia players today (and how much he looks more like an iPod™ due to the pale coloring!), ya kinda start feeling paranoid that other common electronic devices will suddenly up and transform into miniature robots! I thought that because of the coloring and the clear homage to Laserbeak that Decepticon Booster X10 was cool, but Night Beat 7 just brings something different to the table. 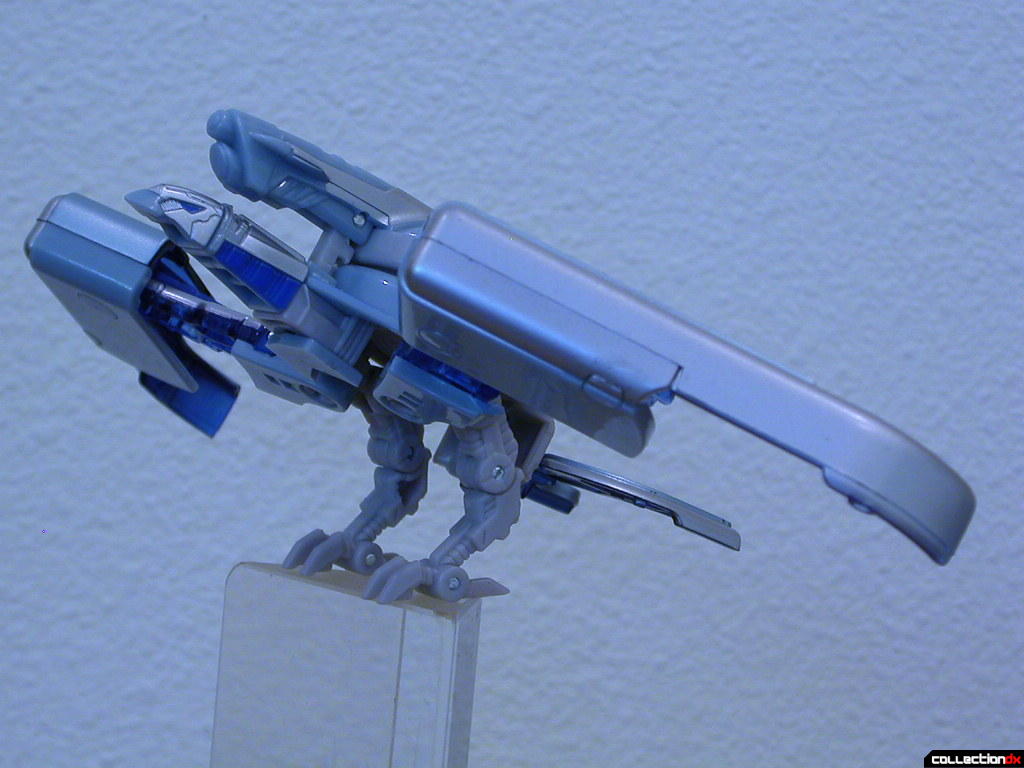