It's been a few years since the original Shin Seki Gokin Neo Getter (7 years, in fact) and Aoshima is still getting mileage out of the mold. The original Black Neo getter was announced at the 2003 Tokyo Toy Show, but was never produced, much to fan's dismay. 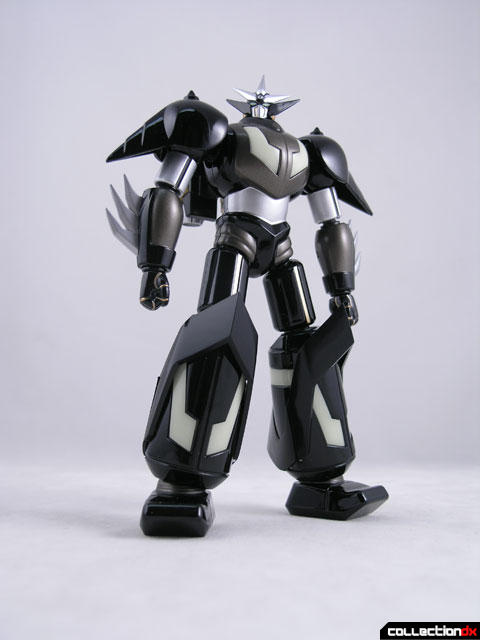 Now Anime-Export has put out an exclusive black version in conjunction with Aoshima/Miracle House. Who are Anime-Export.com you ask? They are a retailer and wholesaler of Japanese goods based out of Japan, with a strong presence in Europe. They have a history of making exclusive versions of Aoshima toys, often times much improved over the original. 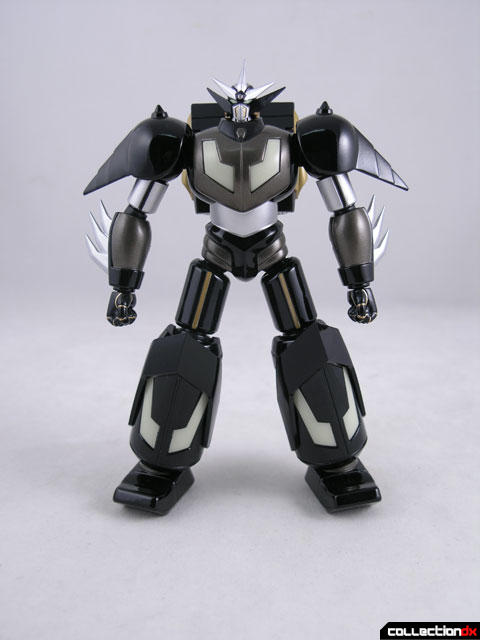 The Black Neo Getter 1 is a fantastic toy with a few small shortcomings. 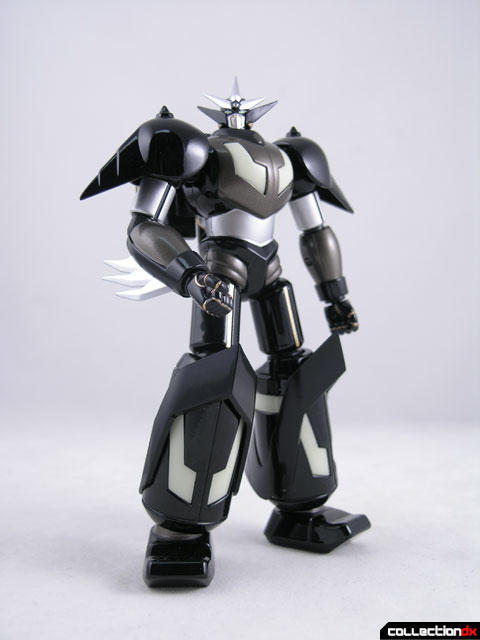 First - the positive. The paint is stunning - glossy black and gold, there is not a flaw to be had on the finish of this toy. The green insets actually glow in the dark, and they glow pretty bright. 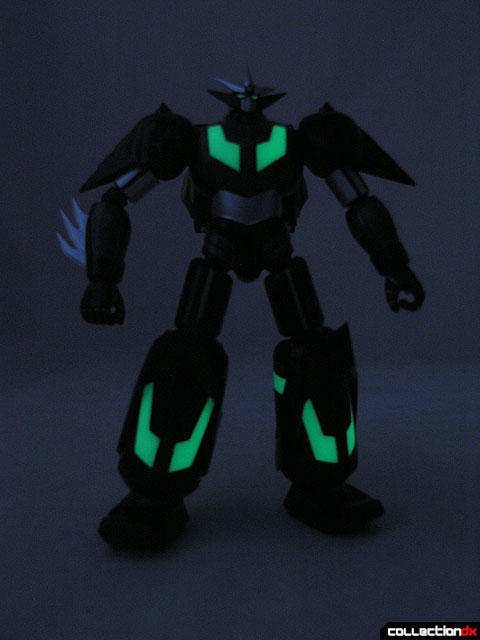 And the metal.. oh the sweet sweet metal. This toy is almost 90% metal. 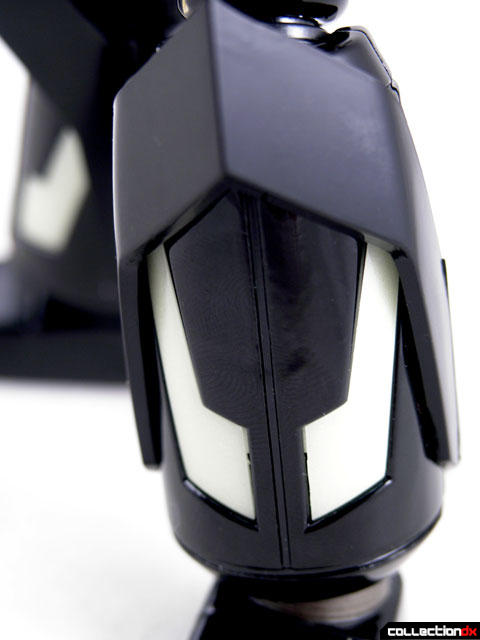 The box is an all-new exclusive black box, the cardboard is embossed and has the texture of the old Orguss boxes by Takatoku. 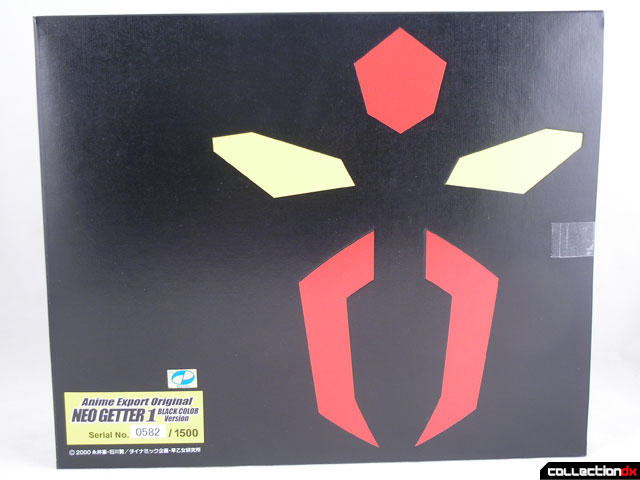 The toy features MOST of the accessories included with the original, such as the missile-firing back units, interchangeable hands, and the energy beam. What is NOT included is the chain fist arms, even though the spots are there in the Styrofoam. 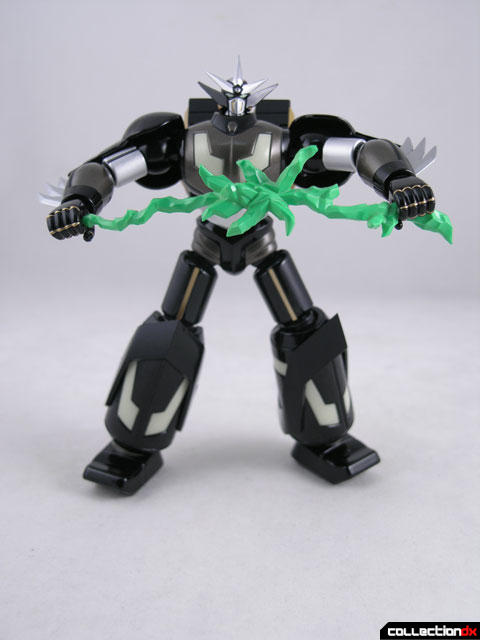 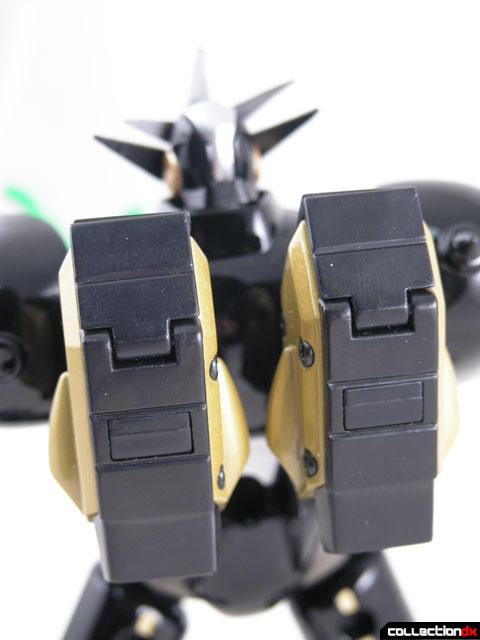 Neo Getter also features redesigned elbows that are exclusive to this release. This version now features the elbows that are like those used in their Mazinkaiser release. You first pull the arms down and THEN bend them. They look great, but this is where the big negative comes in. 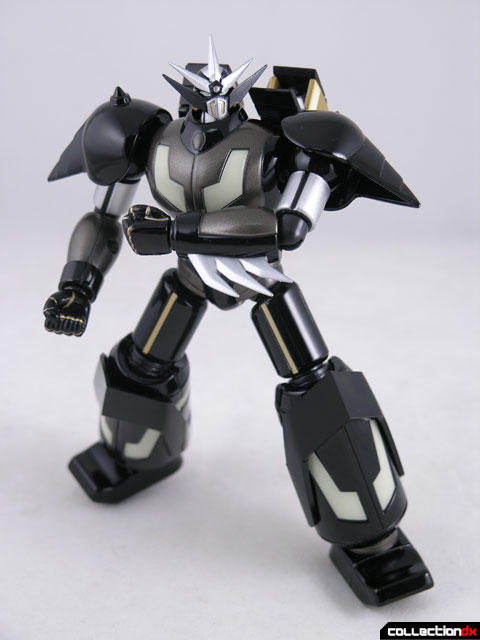 See, the arms don't like to stay on. The friction between the arm peg and the socket is not enough to support the heavy weight of the arm. I bet you could fix this easily by applying a drop of nail polish on the peg and letting it dry, but still, it is an inconvenience. Perhaps I just got a bum one? 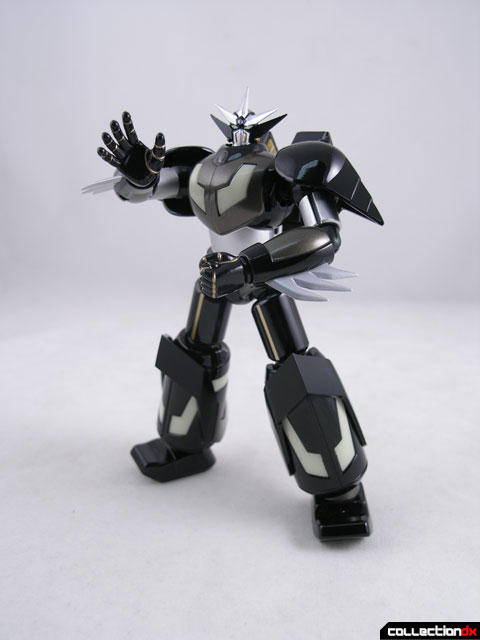 It's also a slight bummer that there are no chain fists, but they have adjusted the price accordingly - its about $30 cheaper than the regular version. 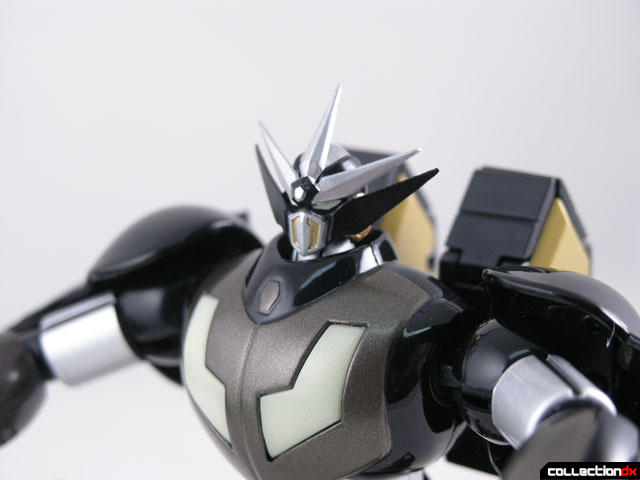 The black Neo Getter is a limited edition item, with only 1500 being made, and is available exclusively at Anime-Export.com

Ooooh. I like. I never liked Neo Getter until now. I guess just a different color scheme does it for me. PURASMA SANDAA
I would also like to thank Shin Vs. Neo Getter for giving me Texas Mack.
TOO MUCH HIGH POWER MAN

sniff...still waiting and hoping for a texas mac figure...with his options, not sure is possible but I still hope

Like Josh, when I got, I was like my extra arms are missing, heck I even called the company I bought from to complain about my arms being stolen before shipping...little did I know they were not included...to bad the missle fire or chain arms...would have made this chogokin from good to perfect in my book...just felt cheated when I got.

I seem to remember thinking that the arms on my regular old blue version popped out pretty easily just in posing them. It must be doubly true now that you have to actually pull on them.

Also, isn't this $30 more expensive than the regular version? Unless you're talking about something else I am unaware of. The original one was listed at 9,800yen. (You're old review is missing that info, btw.)

Just got mine in from Anime-Export.com $41.29+shipping!

This is a very impressive piece overall, The small issues are already mentioned in this great review.
The arms on mine aren't terrible as far as slipping out but do come off when you want to extend the elbow joints out. Not
a big issue as you just have to plug it back in. Then it will hold any pose. This is actually the only color variant I was interested in and its just gorgeous!
Great proportions, Rocket firing back pack and glow in the dark accents (Thats a great bonus!) all add up to make this a really nice piece of Gokin

Anime-Export.com has this on sale now for only $41.29 USD. plus shipping. That ain't at all bad.
I'd jump on it while they're still available. I'll just add that there ordering system is confusing at first (you pay for your items on one transaction then
pay for shipping on another. But arrived in pristine condition.