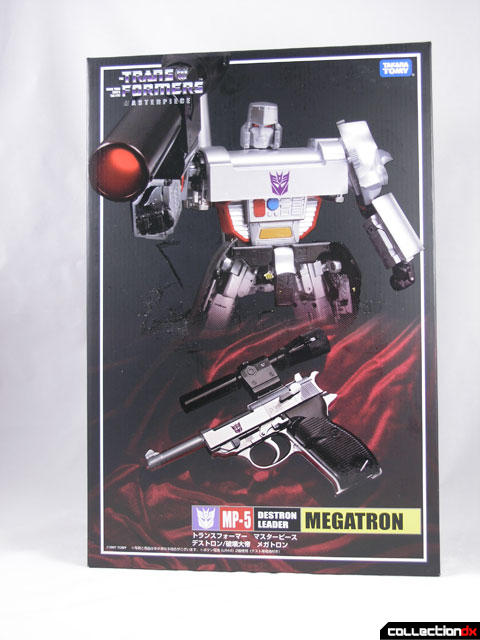 People had wondered that if a Masterpiece Megatron was made, would it be the famous G1 style megatron, or the lame tank version. And if it was the G1 version, would it even be allowed in the states?

Thankfully Takara decided to go with the version of Megatron we all know and love, the old fashioned gun mode. Initially the thought was that it would be allowed into the US because it was not packaged as a gun. After much speculation, Megatron would be allowed to be imported into the US with the condition that an orange tip be applied to the barrel of the gun to comply with US toy safety flaws.

Transformer fans were upset, but at least they were getting Megatron. When a lot of the Megatrons arrived they found the orange tips easily removable. All was good with the world. That is until ebay got involved. Apparently ebay has been pulling auctions of the Masterpiece Megatron due to their guidelines.

It just seems that fate does not want to get Masterpiece Megatron into your hands, unmodified.

Unless you get yours from betaToys.com, who are selling them unmodified. 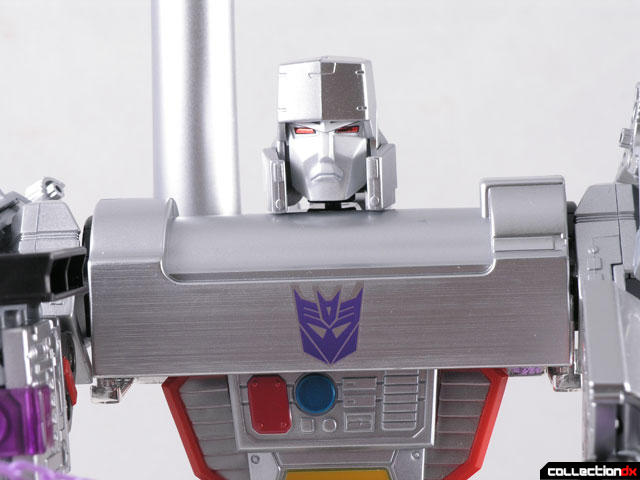 Like I mentioned earlier, the toy ships in robot mode. The box is your typical nice black Masterpiece box, and the toy is encased in a clear plastic tray. The first thing that struck me when I pulled it out of the box was how big Megatron was. Megatron stands about 14 inches tall (to the tip of the barrel) in robot mode. 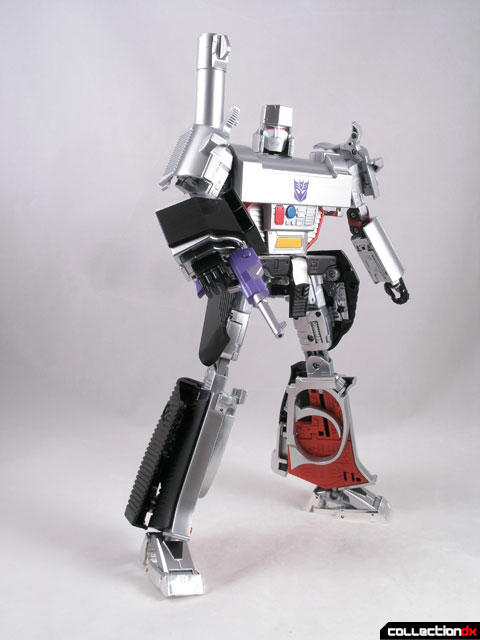 Megatron looks great. The designers did a great job capturing the anime look of the character within the confines of the modern transformation system. They toy is fairly articulated, with double joints at the elbows and knees, ball joint ankles, and arms and hips that can move in almost any direction. The hands have moveable fingers and feature a tab in the wrist that you can plug the accessories into. Megatron holds his weapons firmly. 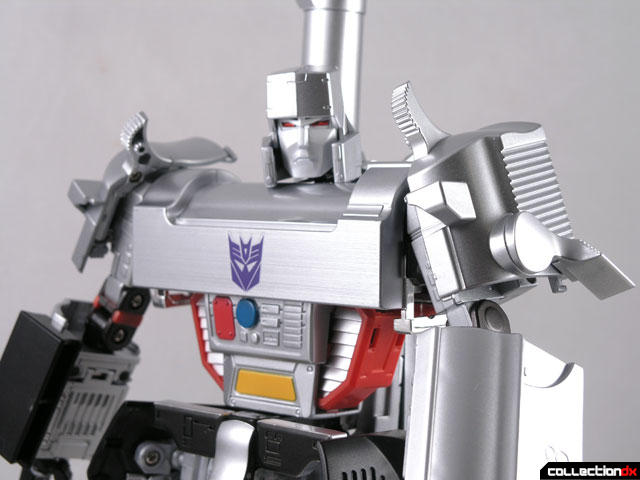 The toy does seem to have a fair bit of kibble hanging off of it, and it makes posing it kind of difficult. The shoulder pad sections are held on by a ball joint that tends to pop off when you try to pose the arm. The same thing happens with the legs. The upper leg panels pop off too easily, and the lower leg panels don’t fall off, but they do become unfastened. Part of this is due to the fact that the joints are so tight that you cant help but move or bump these parts when moving it around. 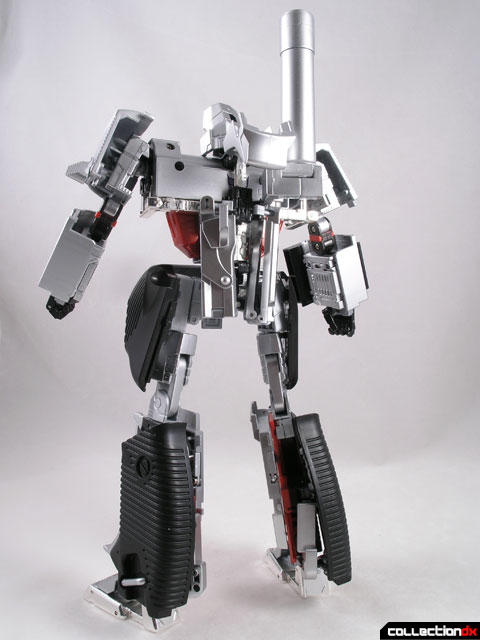 The giant scope cannon fits securely onto Megatron’s right arm, and features a light-up action when the button on the side is pushed. The light is bright but my only complaint here is that you have to keep your finger on it to be lit. Megatron becomes really top-heavy when the cannon is added, but you can actually help brace the feet by lifting up the top panels on the feet so that they touch the legs. This gives added support and prevents Megatron from toppling over. 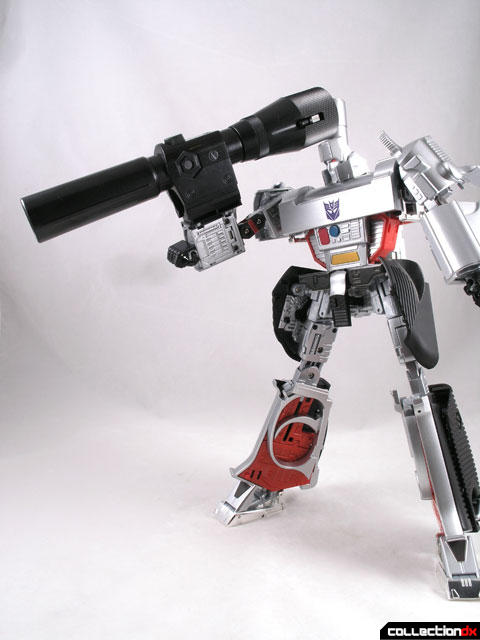 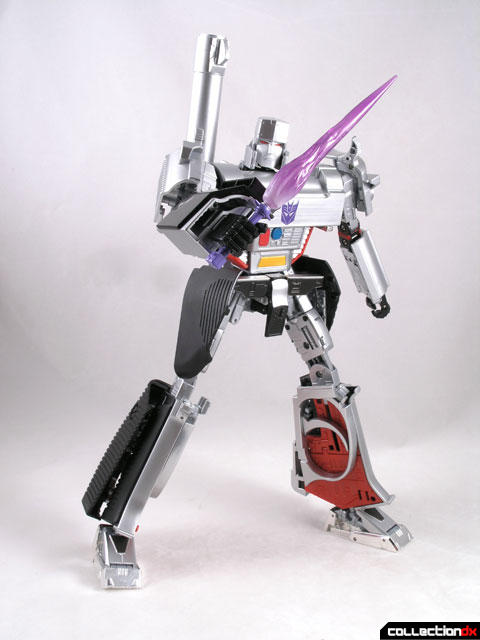 The sword is made out of translucent purple plastic and can be separated into two parts. The hilt features a tab that fits into the palm of either hand. 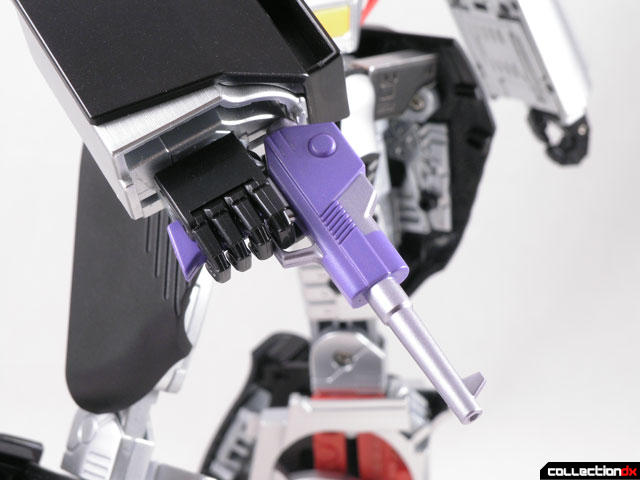 The gun is solid plastic and also features the same tab. Why Megatron needs a gun (I mean, he IS a gun) is beyond me. 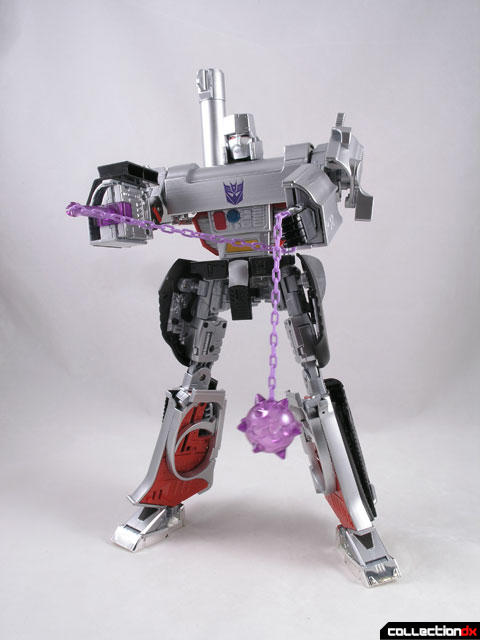 The ball and chain requires that you fold the hand back into the arm and then attach the clips to the stump. The clear plastic ball is attached to the base via a purple plastic chain. 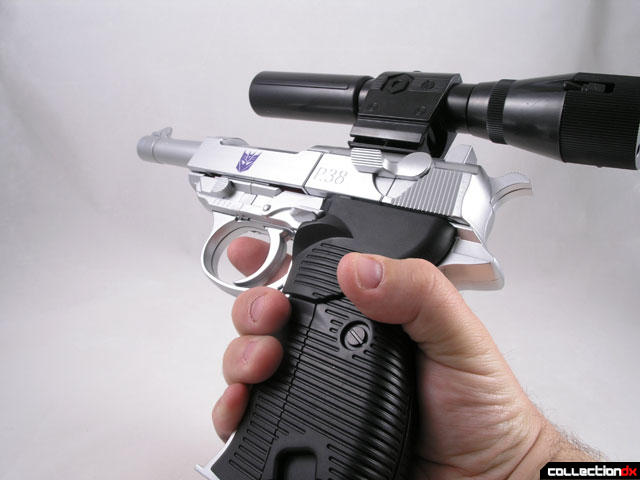 Transforming Megatron is a challenge. It can be done, and once you do it a few times you won’t need the instructions. But it is not instinctive like the older transformers. At each step I felt like if I moved the parts the wrong way I would break it. I’m sure part of this can be attributed to the language barrier – the instructions may in fact offer clearer tips on how to handle the toy. But as it is, some of the connection points are small and made me worry. The transformation is basically the same as the classic G1 toy, just more complicated (if that makes any sense.). The parts go in the same place as before; you just have to do a lot of twisting and turning. Make sure you pay attention when you get it into gun mode, because the instructions don’t show you how to get it back. 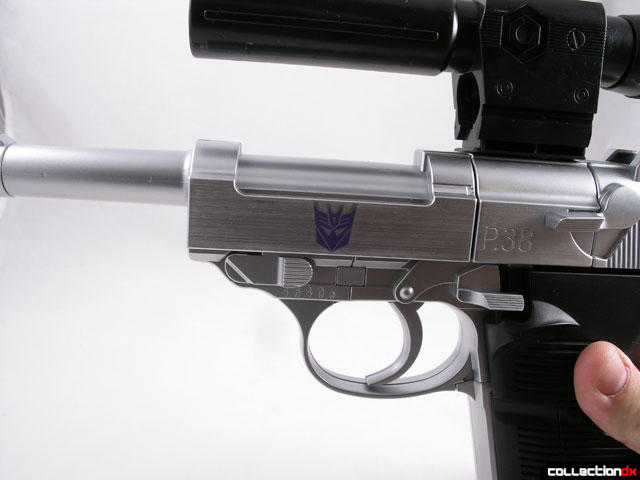 Once you are finally in gun mode (took me 35 minutes the first time), Megatron looks like a realistic Walther P38 pistol. It actually feels a little big in my hand; my guess is it is scaled up from what an actual pistol is for safety reasons. I never could get the all the seams to fit tightly in this mode. There were always a few gaps that I just couldn’t get to be flush but I attribute that to my lack of transformation skills than that of the toy. In pistol mode the trigger works, and the gun safety can be moved. The scope can also be attached in this mode. 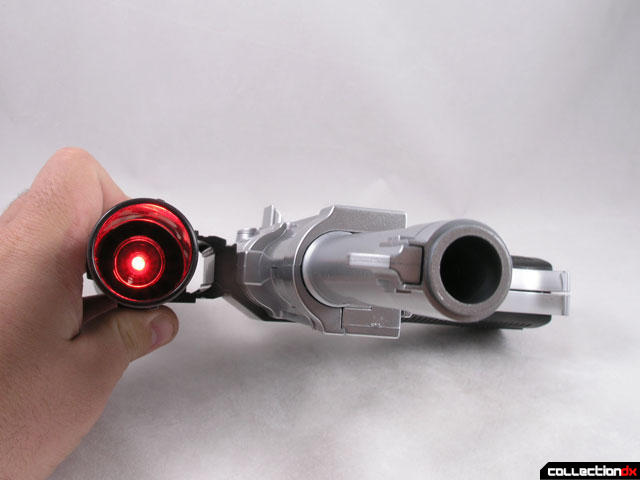 Megatron is a decent enough toy. If you are a fan of the existing masterpiece toys, or if you have a lot of time and patience, this if for you. If you get frustrated with overly complex transformations, look elsewhere.

The unmodified Masterpiece Megatron is available at betaToys.com 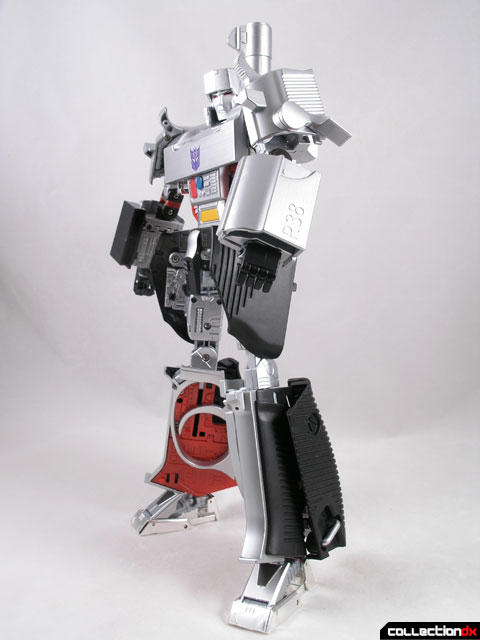 2 comments posted
The gun is big to keep

The gun is big to keep Megatron scale to MP-01 Convoy/Optimus Prime. If the gun was scale to a real P-38, Megatron would be almost the same size as the old one, which would be dwarfed by MP Convoy. Takara (rightly) chose the lesser of two evils and realized that nobody is going to keep it in gun mode anyway so it was the mode to suffer a scale mis-match.

I'm not extremely pleased with it myself, due to the limited poseabilty and low metal content. It, like the Starscream MP, is not as good as the Convoy MP. I also feel that the scope/cannon is too large. In either mode it feels like it's overshadowing what it's attached to. It could stand to be at least 10% smaller and lighter.

The pistol and sword are from the final battle with Optimus in the movie. In the fight he loses his big gun, and since he actually has to be fired by someone else in pistol mode, these were his only options to fight one on one with Prime. The pistol, in fact, is what he uses to deliver the killing blow to Prime so it's actually a big deal to include it. The mace is the nemesis to Prime's axe. They fought each other in one of the first episodes this way and I think they showed up once or twice again.

All in all it's a nice companion piece to MP Convoy, but it's not perfect.

Now this is a thing of beauty.