As with any design process, the appearance of the Star Wars characters changed many times before the final design was settled on. Star Wars fans have been drooling over these designs for years, wondering what could have been...

Now, as most characters have been done to death in toy form, manufacturers are looking back into these concept designs as a source for new merchandise. Ralph McQuarrie's designs are now about to be seen in a whole new light. 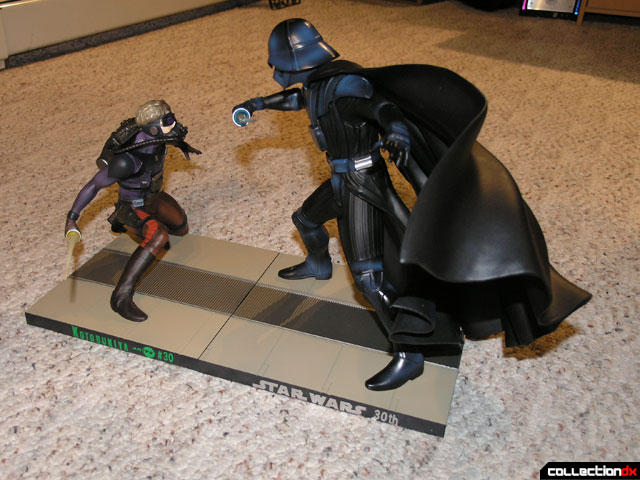 Kotobukiya brings this phenomenal kit of Ralph McQuarrie's concept of the Luke vs Vader duel. Not only is this a concept design brought to life, but it is a re-creation of an actual painting used to pitch the movie.

The "kit" really isn't much of a kit at all. It's more like a statue that you have to assemble. All of the parts are cast in vinyl and pre-painted, only the most basic of assembly is needed. For example, with Vader, you only attach the arms, head, lower legs and cape. Once assembled, the statue is sturdy and there is really no trace that this was ever a kit. 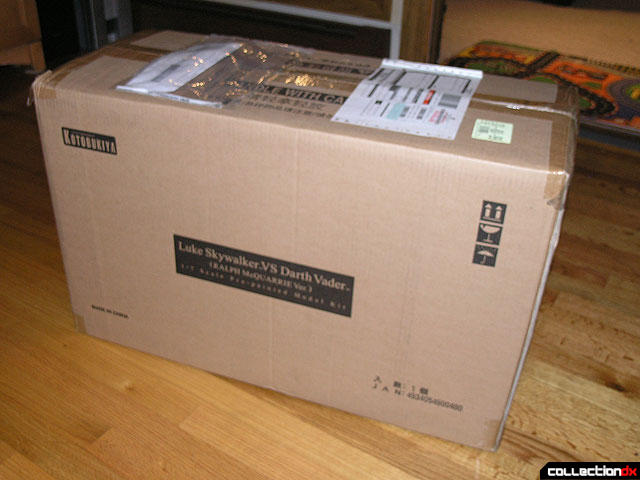 Vader and Luke come packaged in a mammoth box, with product art on one side and Ralph McQuarrie's concept art on the other. Inside the box is a giant plastic tray, with parts secured with twist ties. 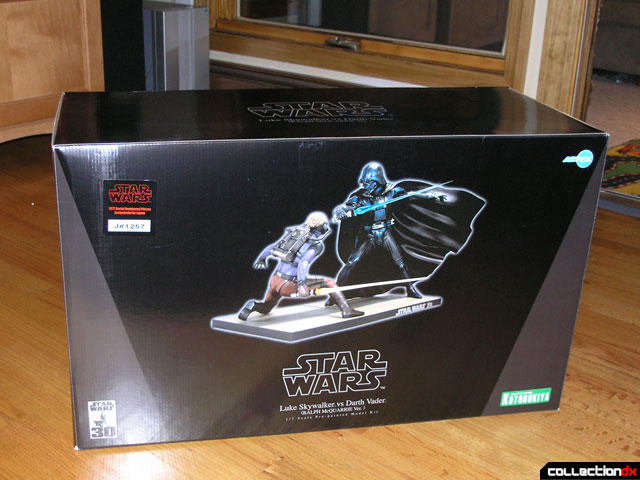 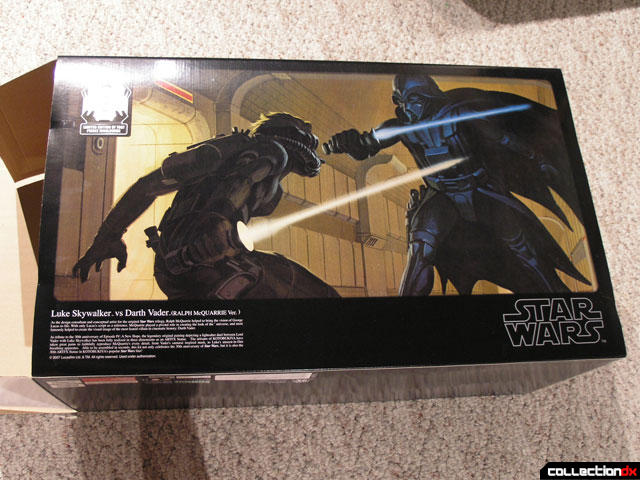 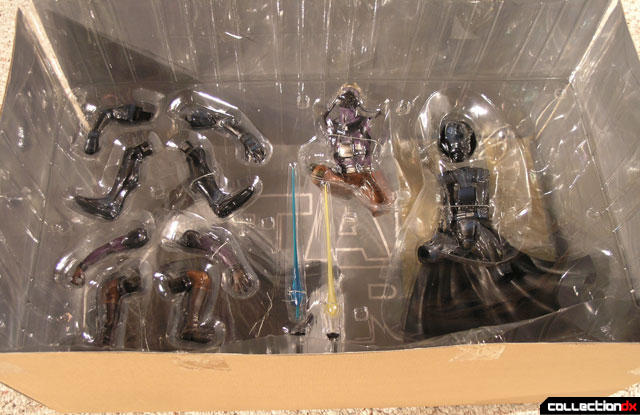 The figures are 1/7 scale, and each comes with its own base. Kotobukiya's motto is "Craftsmanship" and it shows. The sculpt, fit and finish are spot-on. I did find a small defect though - there is a rub on the paint on one of Vader's feet. It looks like it occurred in packaging. 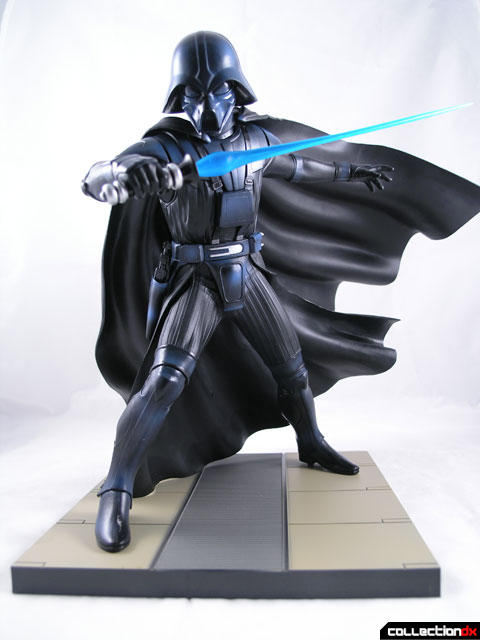 The Vader figure is enormous. looking at the figure, it is clear Ralph McQuarrie had a strong idea of what Vader was going to look like. This concept design is very similar to the design seen in the film. Darth Vader's helmet is a bit more angular, and the armor is a bit different. Vader is also seen with a pistol at his side in addition to his blue lightsaber (as opposed to red in the films). 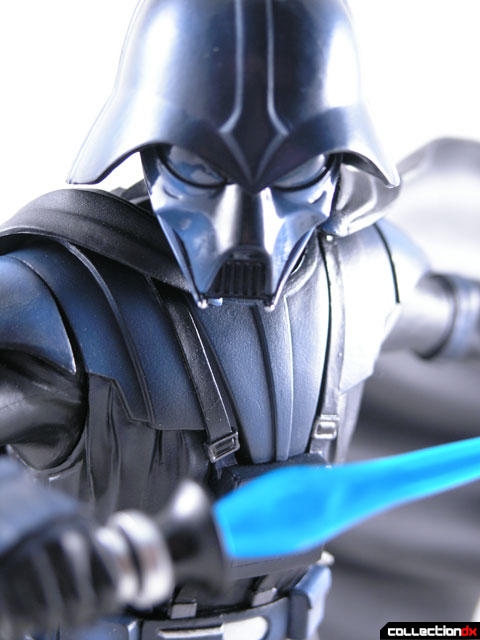 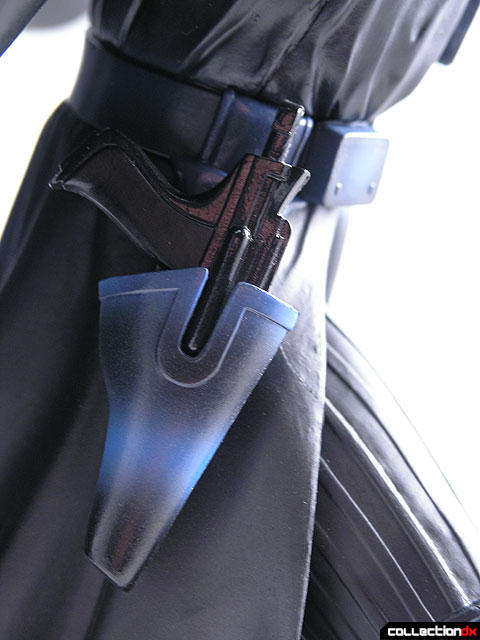 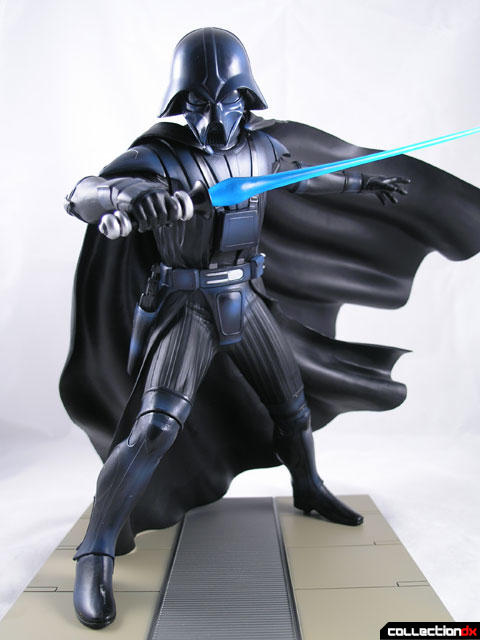 Luke however looks more like the space smuggler Han Solo than the farm boy from Tatooine. His breather mask and goggles cover a determined face, much different than the young Luke who dreamed of joining the academy. 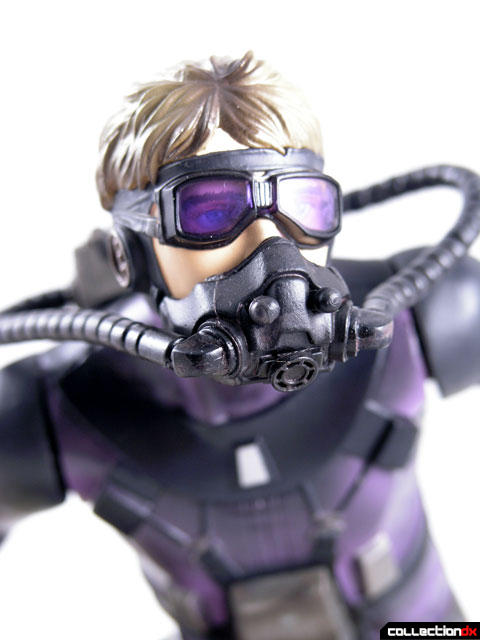 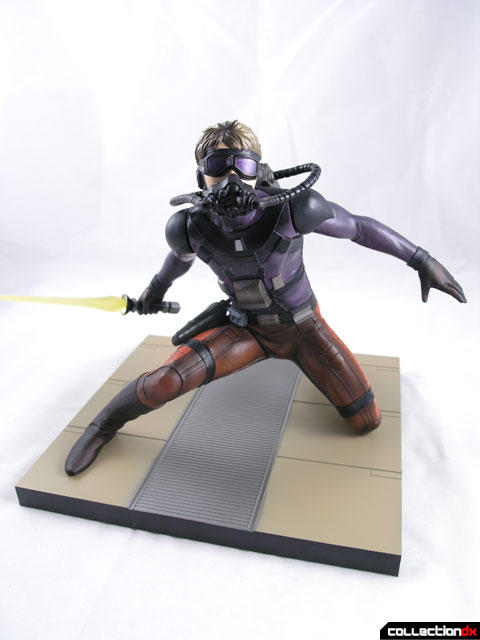 Luke features a clear visor and a gas mask. You can pull the mask down to reveal his face, but you cannot remove it. The mask connects to a well-weathered unit on his back. Luke's weaponry consists of a blaster at his side and a yellow lightsaber. 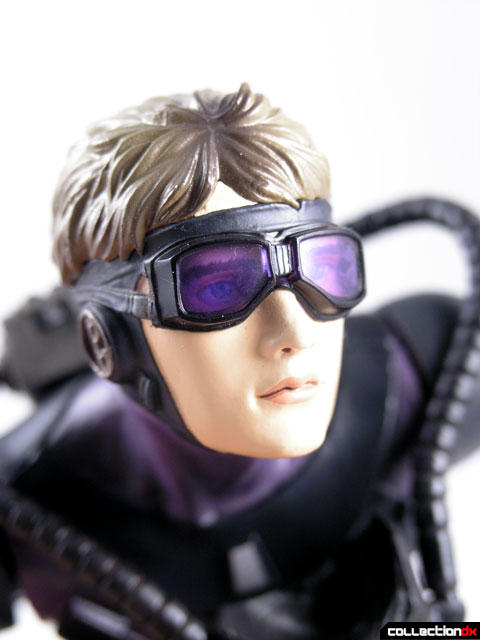 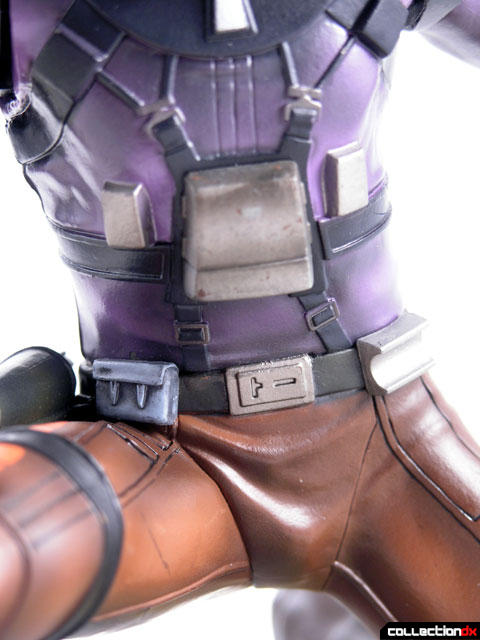 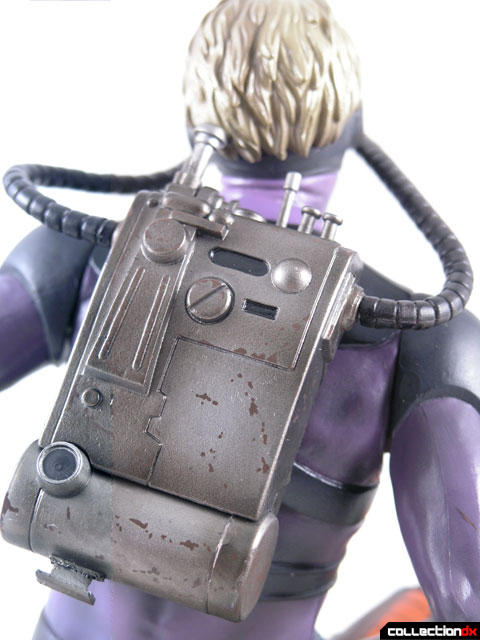 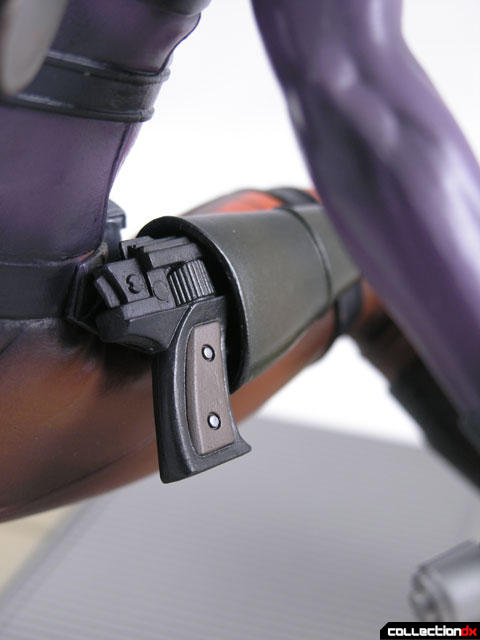 Each figure comes with a display stand, but only Vader's stand has pegs to secure the figure. The 2 stands line up, but there are no clips to lock them together. 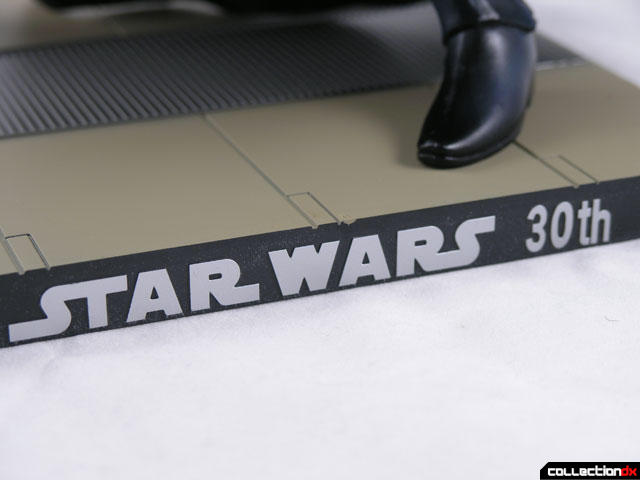 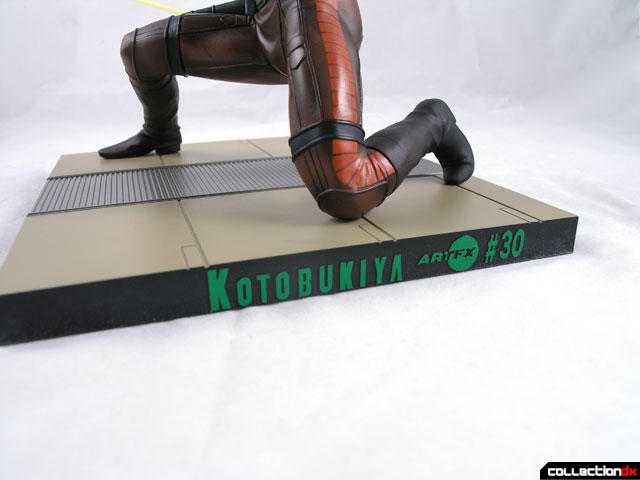 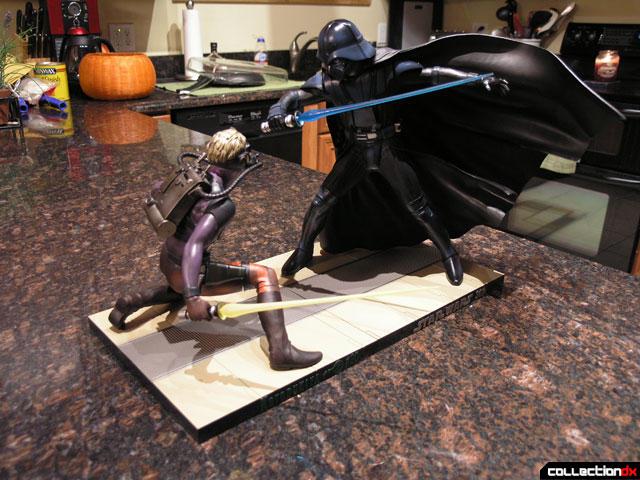 At almost $200, this isn't cheap, but you get what you pay for. This makes for one impressive display piece and would be at home in any Star Wars collectors home. And hey, It's from Japan, so technically it is a Japanese toy also! 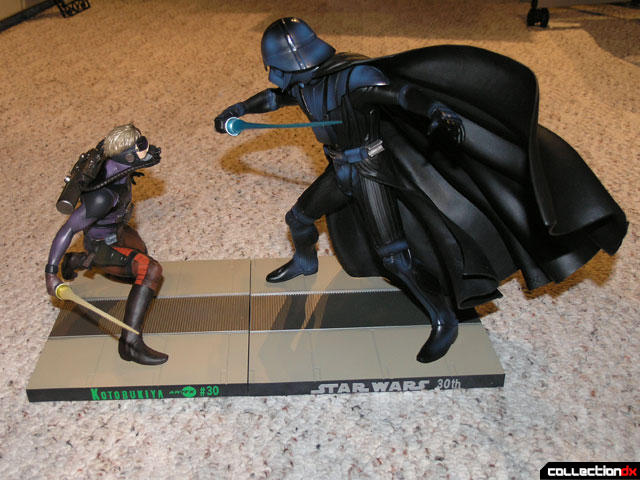 This is a limited edition set. It's not so limited that you can't get your hands on one, but just enough that it is something special. The McQuarrie Luke vs. Vader set is limited to 1977 units in Japan, 3030 in North America, and the remainder of the 7097 in Europe and Asia. 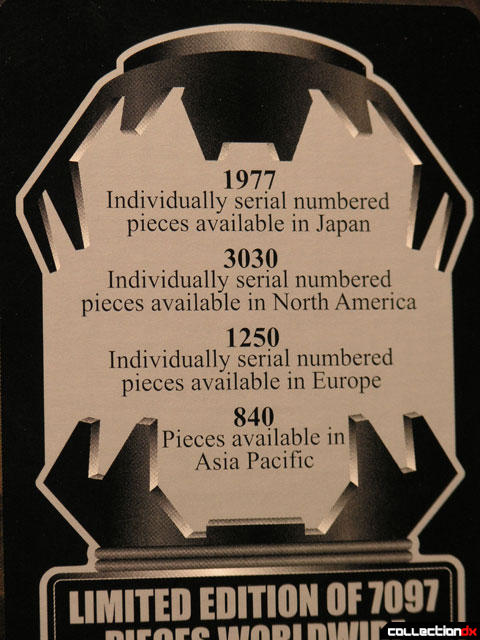 2 comments posted
I got this as well, for not

I got this as well, for not alot of money, only 130 euros !
My only problem is darth vaders head/cape, the cape seems to be way too heavy to stay on and needs vaders helmet to "hang-on" to...
And now 1 peg in vaders head is broken so I'm gonna need glue...