I've had a rather long love affair with Gundam plastic kits (Gunpla). I've been building them since I was a wee lad but I've never been that good at it. I've built everything from the old glue and paint kits to modern Perfect Grade kits. Sometimes I like to keep it simple, and here's where Bandai's 1/60 scale High Grade Gundam Exia comes in. The notion of a High Grade level kit of this size is nothing new. This was done starting with Victory Gundam way back in 1993 and continued through G Gundam and Gundam Wing. Unfortunately, these models reflected the High Grades kits of the time. The amazing engineering present in current models just wasn't there. Everything was crude and full of obnoxious balljoints that could never hold a pose at 1/144th scale let alone 1/60th scale. Fast forward to the SEED era, where a few years of High Grade Universal Century kits and better Perfect Grade kits have yielded many improvements to the design process of large Gunpla. As such, Bandai revived the line of 1/60 scale High Grade kits with the release of a Strike Gundam and Freedom Gundam. While I do enjoy a good Perfect Grade kit, there's something inviting about building these big High Grades. They are very much made for beginners and experienced builders alike with full color manuals and many hidden seam lines. I love the Gundam Exia, so this kit was a definite buy for me. 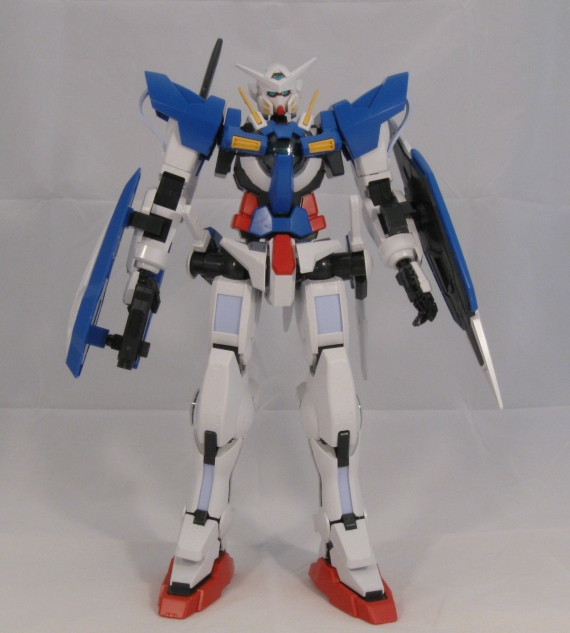 This Exia is big. Really big, like you may think your Master Grade Nu Gundam is big but that's just peanuts compared to Exia. Easily a foot tall, Exia looks ready for battle right after assembly. The kit consists of 16 parts trees and is very similar to a typical modern High Grade 1/100 kit. One nice thing about a kit this size is that most of the large areas are made from separate parts so little detail painting is required. The GN Particle transmission cables (those lilac panels) are made from a rubbery material that slides between the arm and leg parts. My kit has not been painted in any way. 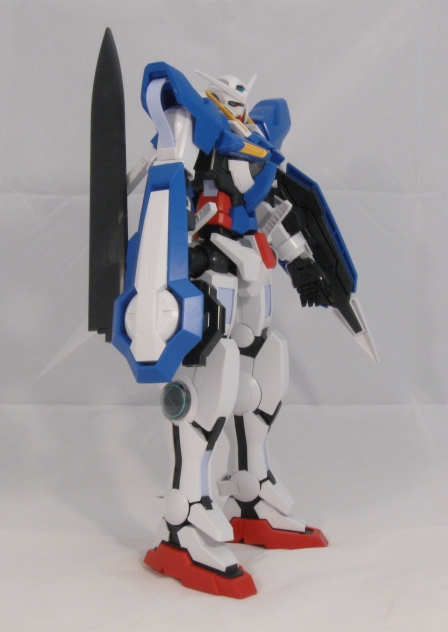 One area that could have benefited from a few extra parts would be the shield portion of the GN Sword. It has a few gray pieces that could have cast as separate parts, however the size of the kit makes painting them easy. The blade itself is missing some light gray details and there are no stickers provided for these details. 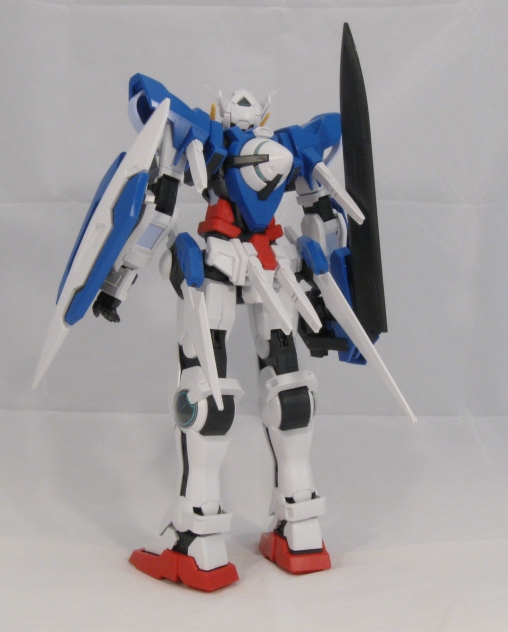 One thing I appricate about this kit over the HCM Pro toy is how easy it is to outfit Exia with all of its weapons. The arm weapons plug in very smoothly and the GN Long and Short Blades are attached via two extension pieces that plug into the hips. You have to simply move the white hip caps and replace them with the mounting parts. The mounting parts may also accept the white hip caps to complete the illusion of extending mounts. These mounts can rotate a full 360 degrees so as not to impede leg articulation when the blades are attached. The GN Drive cone on the back uses a combination of clear parts and green stickers to replicate the GN Particle generation effect. 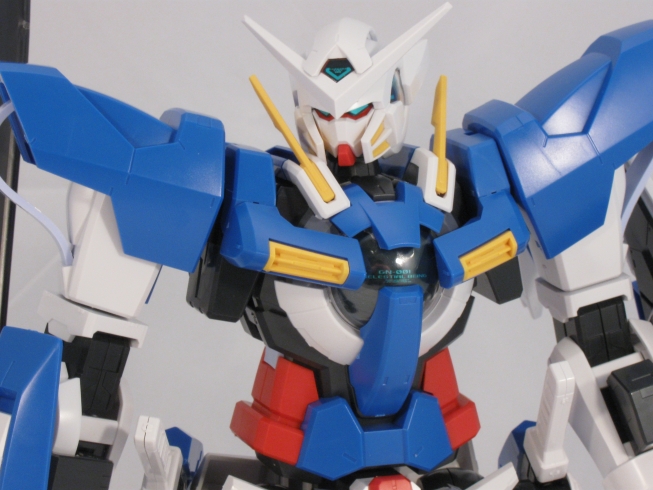 The details for the chest are provided by a set of paper stickers sandwiched under a clear cap. Each of the GN Capacitors found on Exia's knees and elbows have this same decal setup. Exia's shoulders have a compound joint which allow the figure to shrug its shoulders up and down as well as swing them back and forth a bit. Sadly, Exia's waist joint is a simple peg and hole joint but it serves the figure well enough. In fact, Exia has very few balljoints. There is one in each ankle, two for the hips, two for the wrists, and one for the neck. The rest of the joints are all peg and hole style, which generally last a lot longer than polycap balljoints. 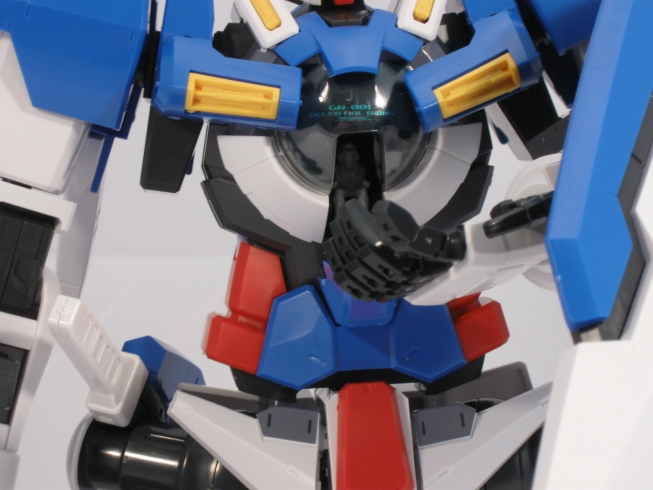 This kit is large enough to feature a simple opening cockpit gimmick complete with a miniature Setsuna F. Seiei. The kit's fingers can open and close with the index finger being separate from the other three. 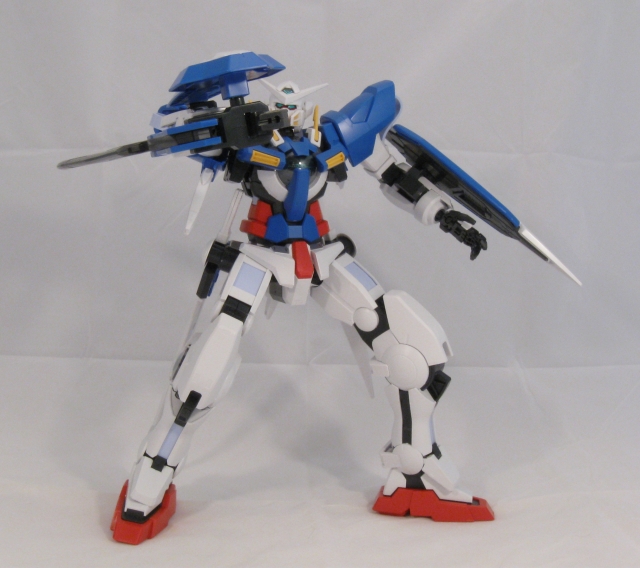 As a large scale High Grade kit, Exia is simple and fun to pose. 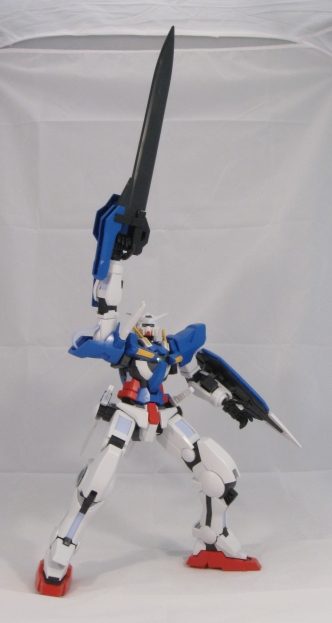 At 1/60th scale, the GN Sword is about the size of a dinner knife. 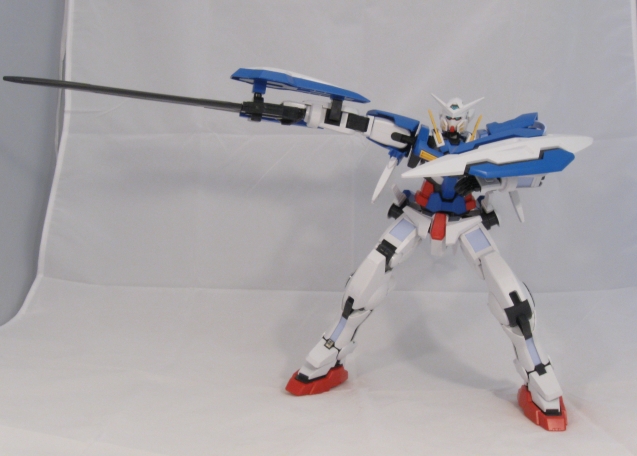 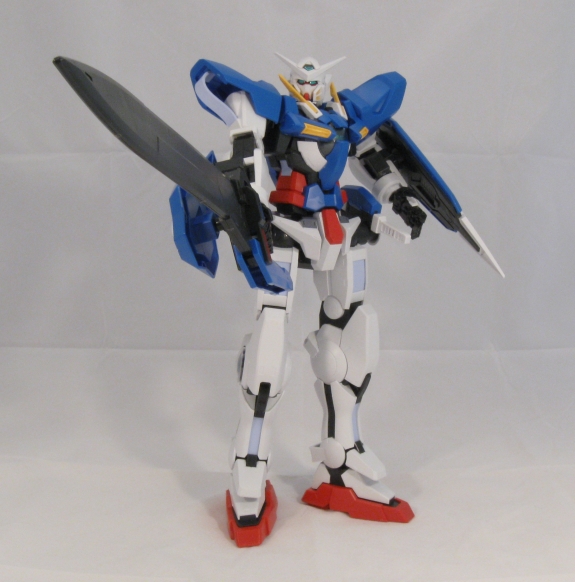 "My name is Setsuna F. Seiei. You killed my comrades, prepare to die." 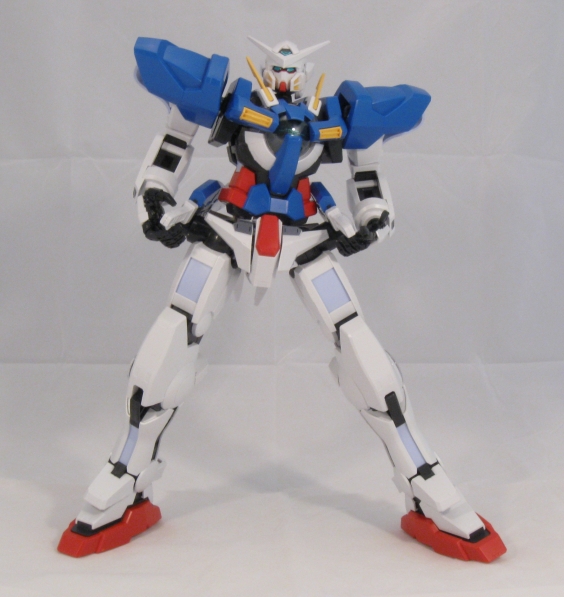 When the GN Sword can't cut it (its a dull blade sadly), Exia can reach for its twin GN Blades. 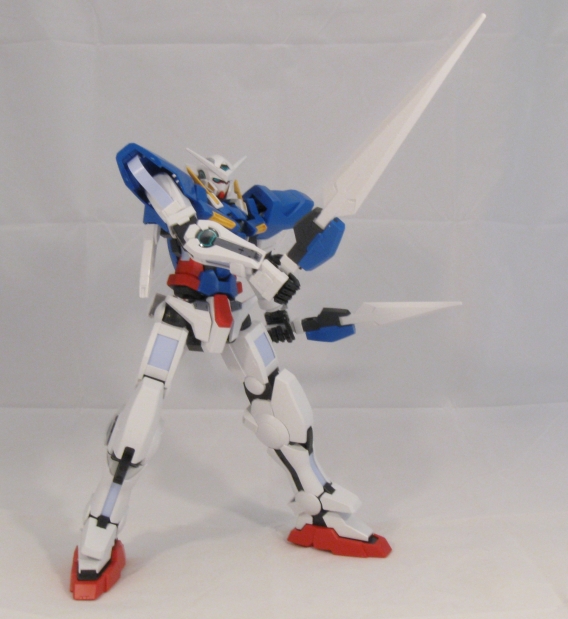 Each of Exia's weapons have two slots which plug into rectangular pegs in each palm. The kit's fingers are stiff enough to hold its weapons without these pegs. 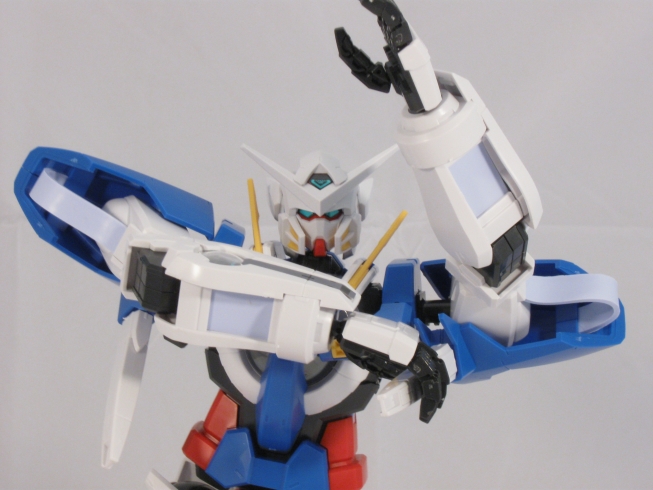 After the GN Blades, comes Exia's four GN Beam Sabers. One is mounted on the back of each shoulder pauldron. 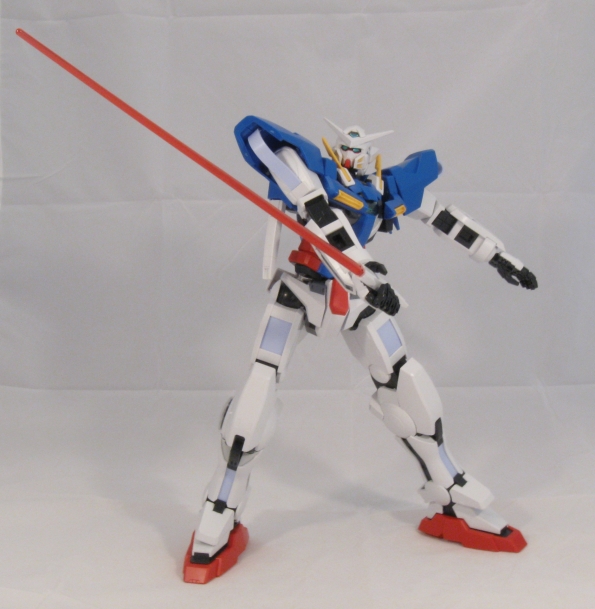 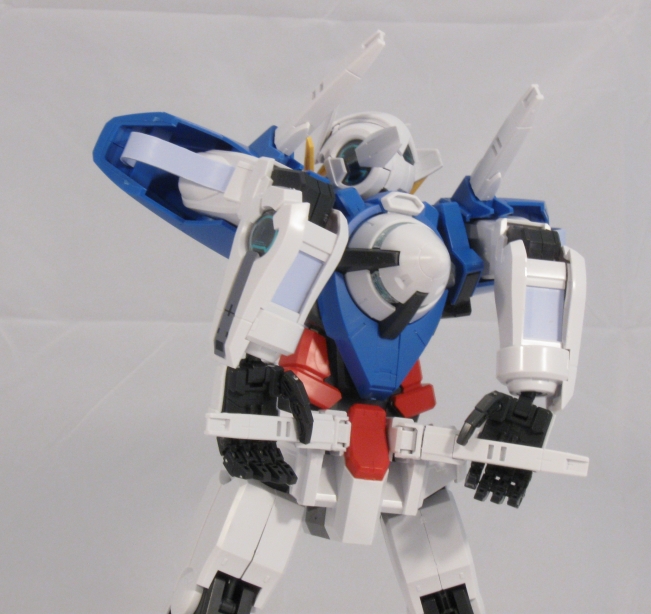 Exia often uses its aft mounted blades as throwing knives. These are mounted on double hinged joints for easy access in battle. 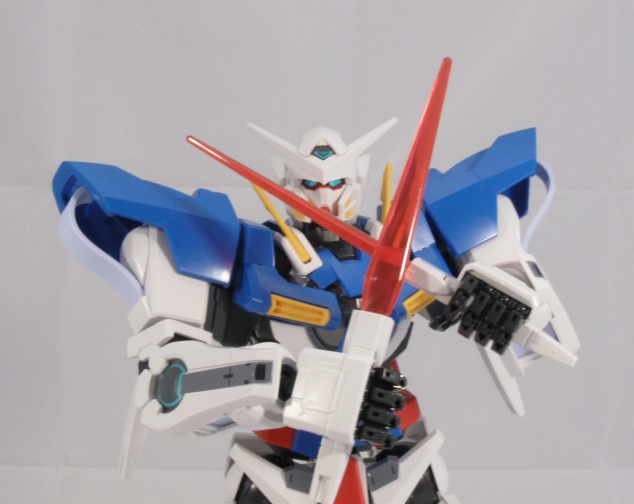 Up close you can see the stick detail for the wrist mounted GN Vulcans. The sticker does an alright job, but again the size of this kit makes painting these little details so much easier. 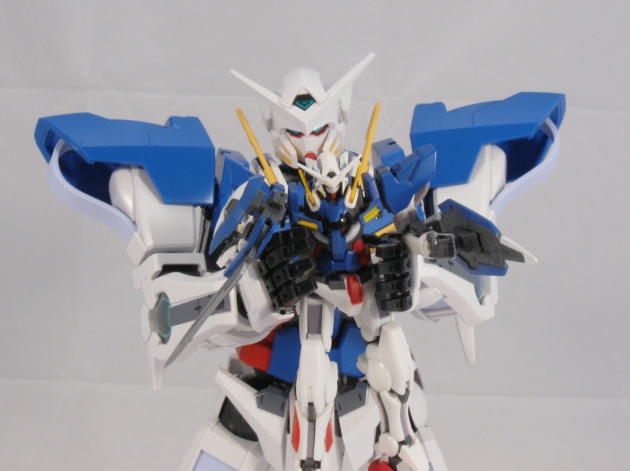 Fresh off the assembly line, the large Exia kit compares well with its smaller toy counterpart in terms of detail. 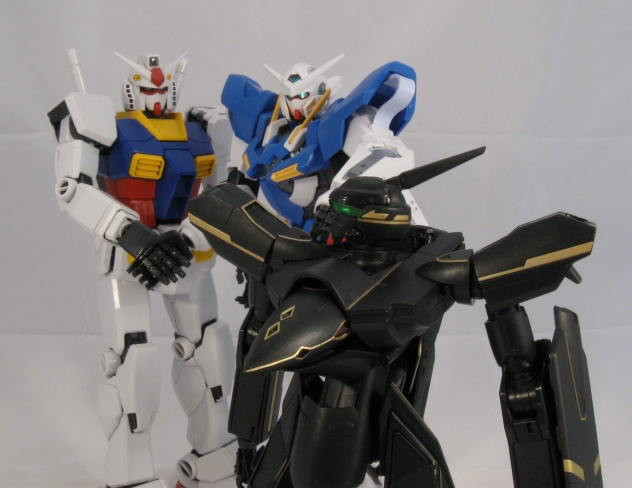 At 1/60th scale, Exia is a true diplomat to other robots of this size. It is always forging alliances... 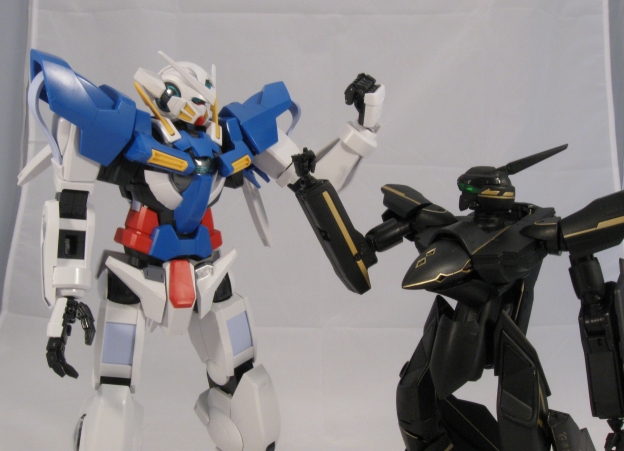 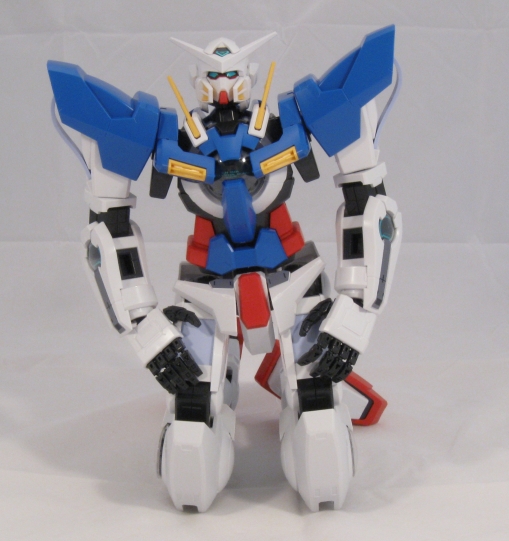 At the end of the day, the big Exia is just good simple fun. Sure a Perfect Grade kit will give you unparalleled detail, but there's something to be said about straightforward High Grade. My only lament is during Bandai's initial preview of Gundam 00 merchandise they had mock-ups of all four first season Gundams in 1/60th scale. What an awesome sight it would have been to have all four Gundams in this size. Regardless, Bandai's 1/60th scale Gundam Exia is a great kit for newbies and experienced modelers alike.

Almost makes me want to build another kit. I like the design of the chest on this one, but the legs look a bit off to me, like they are too long and/or thin. Cool review.

"I like the design of the chest on this one,"

The big scale, HG kit, is what Bandai needs to do more often. They actually go back farther than Victory if you count the old 1/60 kits from the original run. While those are very simplistic kits by comparison, it shows Bandai recognized early on that there was an audience for a large-scale kit that wasn't that much more complex than the smaller scale kits.

While a PG kit is a test of patience and marvel of engineering, the end result is an expensive kit that is at times too fragile for it's own good, and 75% of the kit is hidden under the armor - never to be seen. It might represent a completely modeled scale version of the MS, inside and out, but sometimes you just want a big version that can do the stuff in the show without being $200 and 1,000 pieces.

This is where these kits come in, and for about 1/4 price, you get a fun kit you can build in a few sessions and still looks good on the shelf. My personal favorite was the F91, although that is a borderline toy and possibly falls into the HCM family more than a model kit.

Sadly, this type of kit is usually resigned only for the current "hot" Gundam at the time, and is always the hero Gundam of the show. While it makes sense given that it's likely the one that would sell the most in that scale, I'd like to see Bandai make some older Gundams in this scale that didn't get the treatment, including the "bad guy" as well.

Now THAT is one sexy Gundam. Love the clean simple head sculpt and elegant features. And those svelte, long legs. It's been a long time since I've Gundam'd but I think this hot mama will have to be mine shortly.

It's been a while since I've found a Gundam that turned me on. I thank you for this review(my wallet does not).