At of the end of my mini HCM Pro Gundam 00 countdown we find the Gundam Exia. Said to be the symbol of the entire series, Exia represents a blend of the familiar Gundam motif with a unique styling and some awesome weapons. This palm-sized figure is ready to lead your own group of tiny Gundams! 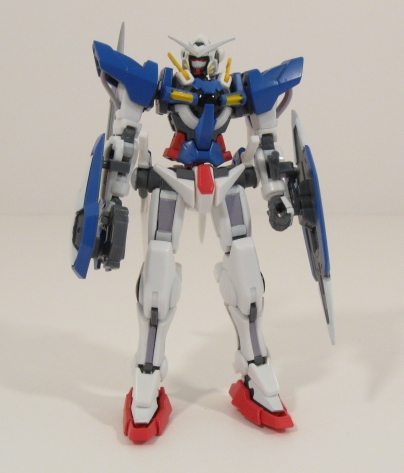 The Exia figure meets all standards for an HCM Pro toy. It is small, highly detailed, and sturdy. Being the first Gundam 00 figure in the HCM Pro line, Exia is fortunate enough to have had no further developments in terms of weapons so everything it has ever used in the show is present on this toy. 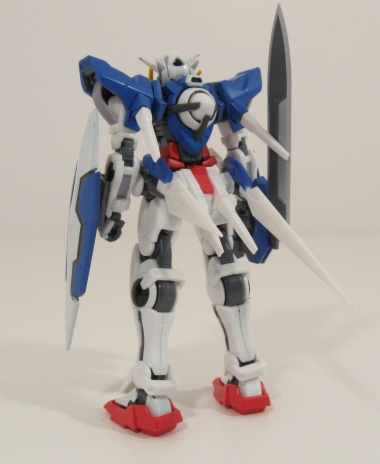 Exia is known as the Gundam with Seven Swords. From the rear you can clearly see its four beam sabers, one long sword, one short sword, and Exia's signature GN Sword or as I like to call it, the giant switchblade. The beam sabers are easy enough to plug in and remove but the small swords take some extra parts. Exia is meant to have a pair of mounting points on its hip that extend out to holster the swords. On this figure Bandai went with two sets of out thigh pieces, one with the mounts extended and one with the mounts retracted. I would suggest plugging the swords into the mount before attach the thigh parts to the leg as it can be difficult to do so with the thigh part already attached. 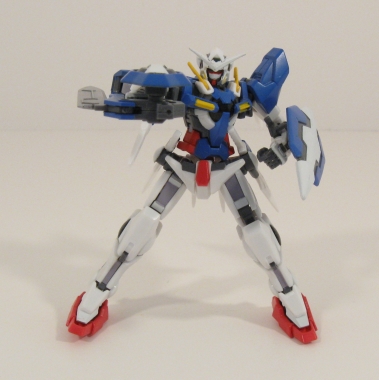 When not in use, the GN Sword has a small beam gun under the hilt. 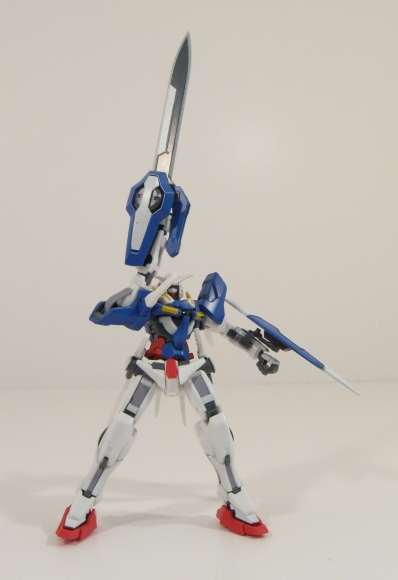 As you can see, the figure has no problems hefting its gigantic blade over its head. The GN Sword is secured via a forearm bracket and the handle of the beam gun which are connected together with the shield structure on the exterior of the blade. Once its attached, the GN Sword is rock solid. 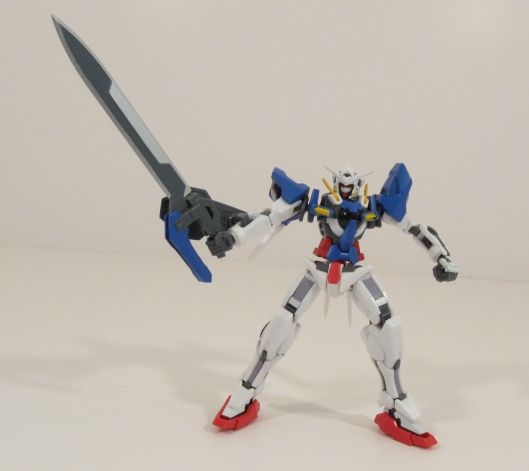 Both the handle and forearm bracket are meant to allow the GN Sword to tilt upward for a little more finesse. Exercise some caution when moving the gun handle. The Exia I received had a defective handle that was fixed in place. I had to wait for a replacement because the handle almost broke off when I tried to move it. The Exia itself is a well articulated figure, featuring all the standard joints plus a few extras like extending shoulder blocks and hinged toes. 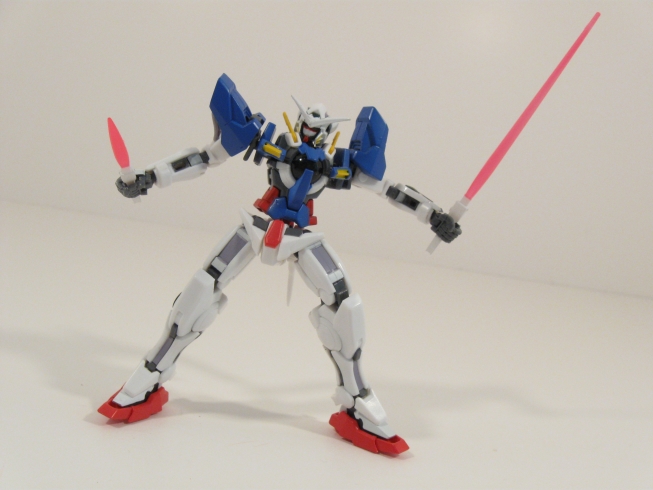 One complaint I do have about the accessories is that Exia only comes with one saber in sword mode and one in dagger mode. Why couldn't they just include at least two of each? I suppose if you own Exia, they expect that you are just going to buy the other three Gundams so you should have no shortage of beam sabers. 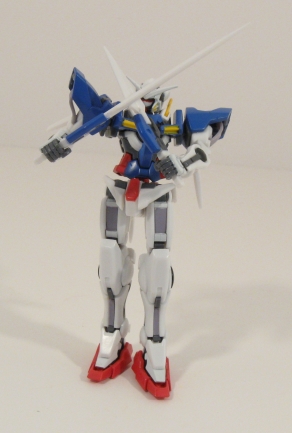 Exia's twin swords are both nicely detailed weapons and fit snugly in the figure's hands. 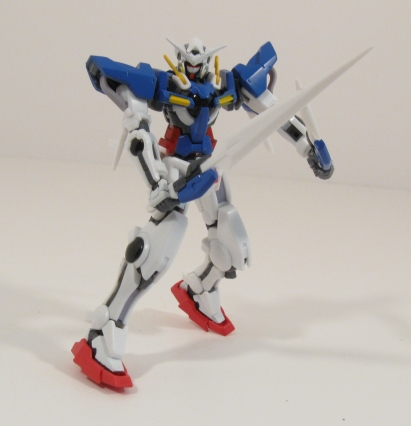 I must admit I wasn't too sure how to pose Exia with its twin blades. 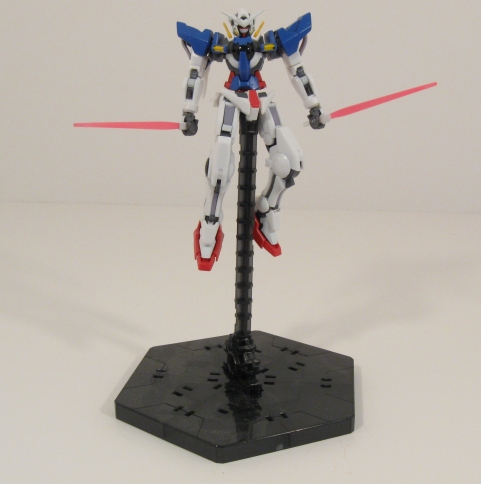 Probably the most notable inclusion in this set is the special display base. Looking very much like a K'Nex set, this base comes with several connector pieces and extension bars to allow you to display your HCM Pro figures as if they were flying. The level of foresight on Bandai's part is amazing since while not all HCM Pros can use this stand, a large number of first run figures are compatible. These include the RX-78-2 Gundam, the Zaku IIs, the Gelgoogs, and many others. Strangely, Gundam Dynames is not compatible with this stand. 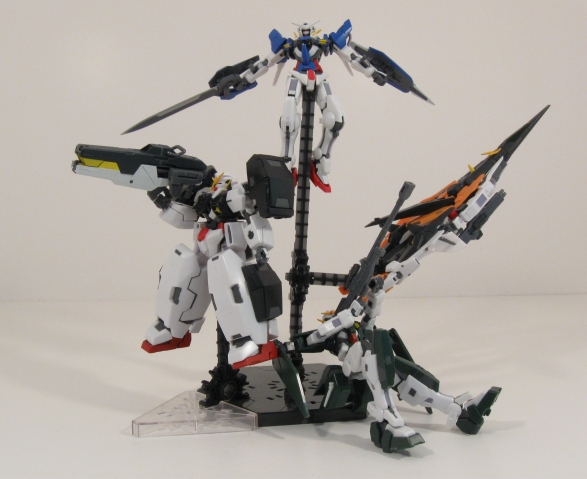 Together the four Gundams make an impressive display. The main stand coupled with the parts from Kyrios allow the Gundams to huddle together, each doing what they do best. At the end of this journey, if you're a fan of Gundam 00 or if you like HCM Pro figures in general, these guys are the way to go.

Holy crap,that setup with all of them on the same base is AWESOME. It's such a great show,too.

HLJ it's having a Gundam Sale and you can find these guys for 50% or less of their original price!
^ ^