Giant Robo comes from the 1992 anime series Giant Robo: The Animation (ジャイアント・ロボTHE ANIMATION). This series was a retro-anime, a remake of the original Giant Robo live-action series in 1967 (Known in the USA as Johnny Sokko and his Flying Robot). 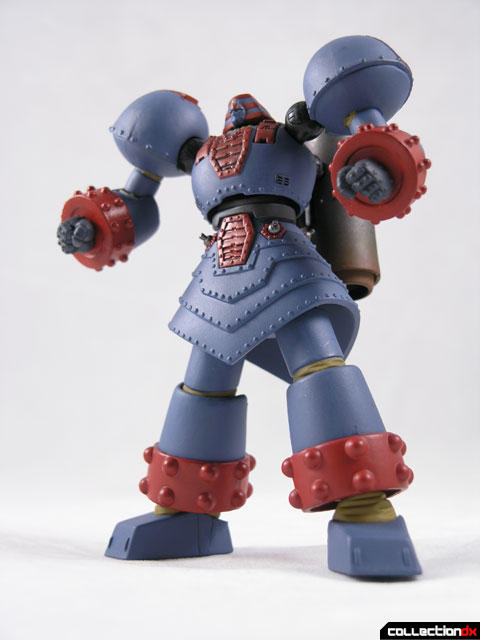 I've never understood why there aren't more toys of this design. It is one of the few remakes that I think successfully captures the spirit of the original character. 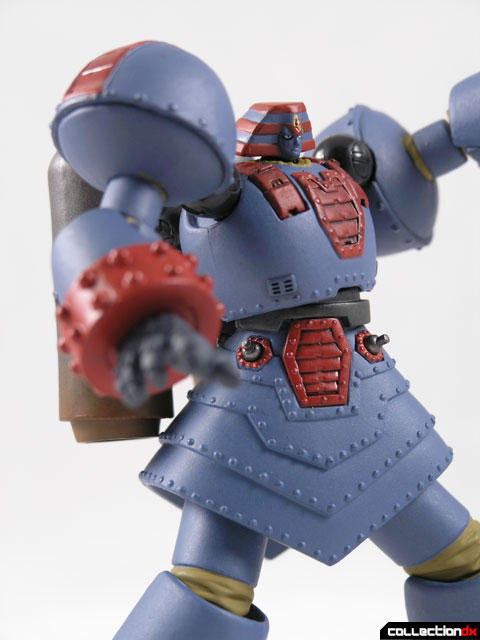 Revoltech Giant Robo was released at the same time as the Revoltech Convoy. They shared the ride from HobbyLink Japan to my house, like a pair of mismatched roommates. While the figures are aesthetically different, they both retain the Revoltech design sensibilities. This is a credit to the main designer of the Revoltech series, Katsuhisa Yamaguchi. 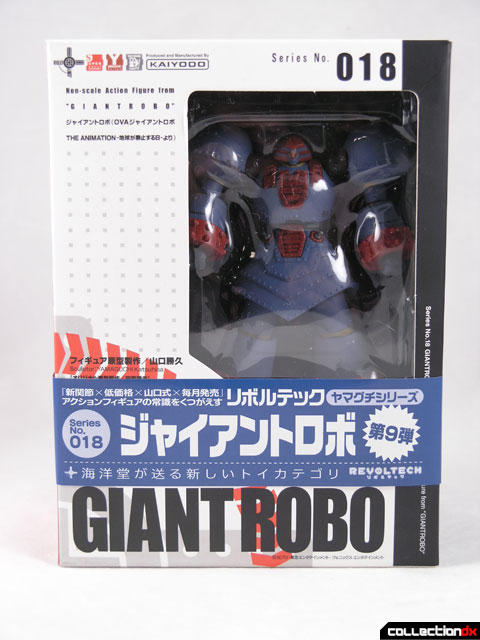 Giant Robo stands 5 inches tall and features a whopping 14 Revoltech joints. There are NO monoshaft joints on this figure. Each point of articulation is a Revoltech joint, which in my opinion, is pretty sweet. 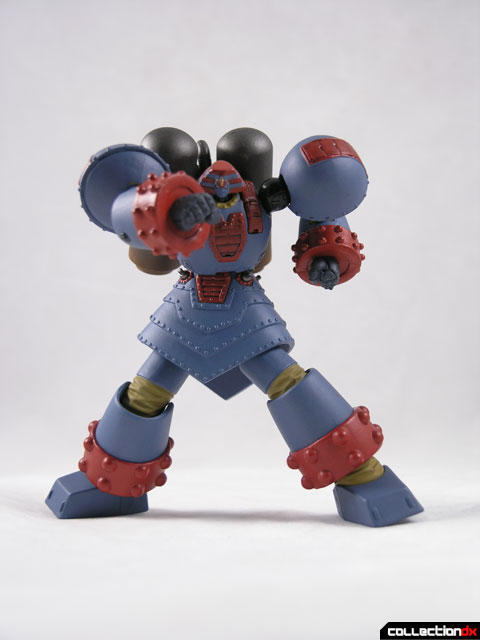 The sculpt on this toy is absolutely astounding. The toy is molded in a grey-blue plastic with red and gold paint highlights. The detail is sharp and the finish is even. Kaiyodo has really refined the Revoltech process since the line began.

The figure comes with 2 variant hands - that's it. No stand, no extra weapons. I initially thought "How Boring!". But then as I looked closer I realized that it had missile banks! They are hidden by a unique system of panel swapping. You can pry out the red panels on the shoulders and chest and reverse them to reveal the missile launchers! That is very cool, and unexpected. 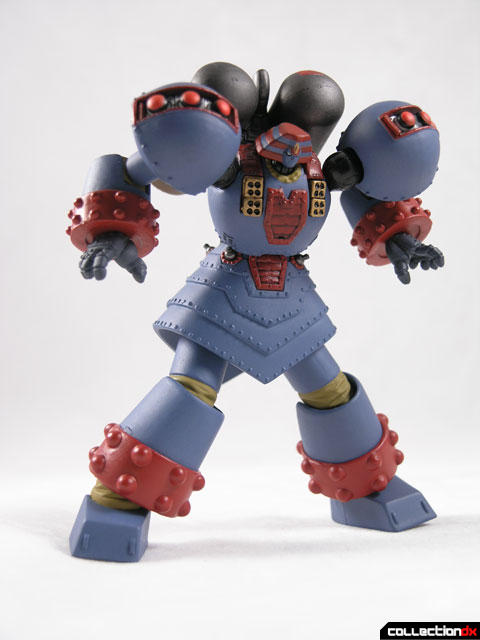 Giant Robo's Jetpack is articulated by 2 Revoltech joints on the back, and is removable. In the anime, Giant Robo had the ability to turn his Jetpack into a giant cannon. This cannon is not included with this release. Instead, Kaiyodo is packing the cannon parts in with the upcoming GR-2, Giant Robo's Nemesis. I suppose most people who are buying Giant Robo will get GR-2, but it still stinks that you have to buy both figures to get those parts. 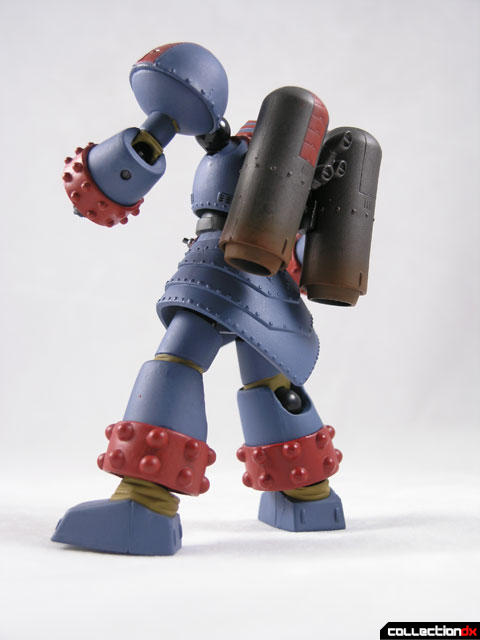 One other gripe I have is the use of the new elbow joints. I addressed this issue in the Convoy review, but to sum it up, the ends of the Revoltech joints stick out of the forearm and look ugly. 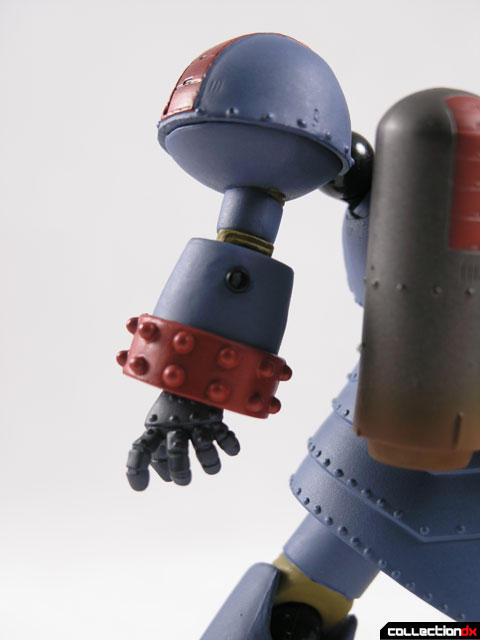 Otherwise, this is an awesome figure - I love the character choices Kaiyodo has been making for this line, and I can't wait to see what they have in store for us. 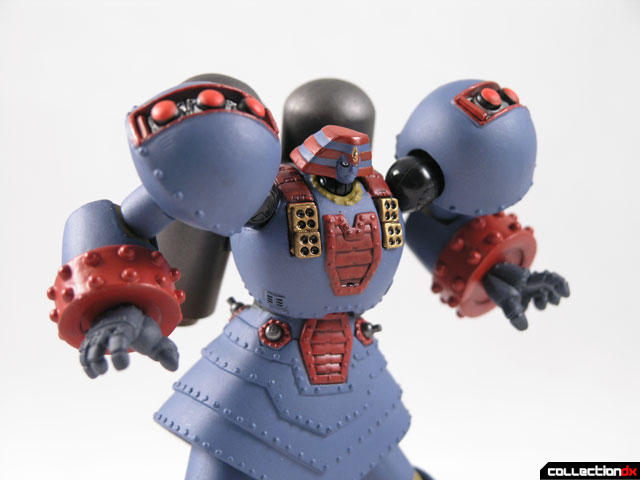 Those shoulder plates break easily on the ends. Try to pry up both sides together and lift straight off. The first one I removed broke the end off.

Personally, I don't think the missile launchers add that much to the look of the figure; the "hide inside" gimmick means that they can't stick out very far, so they don't have that Turn It Up To ELEVEN aesthetic we've come to expect in Revoltech.

They are made to simply appear that the panels have slid open to reveal the rocket batteries in the shoulders. I don't think that these would ever really "stick out". I like mine just fine this way as it is more accurate.