The damaged Getter 1 replicates the final scene in the OVA and Manga, where the Getter Core is ripped out and exposed! This is a limited edition, EXCLUSIVE item from Anime-Export.

Anime-Export is one of the lucky few retailers that has had the opportunity to do exclusive versions of Aoshima toys. For this release, they took the standard Getter 1 (from the new-ish Getter OVA) and decided to replicate the final scene in the series.

Here are some of the features, as described by Anime-Export (hey, why reinvent the wheel?):

"1 - For the first time an Aoshima Shin Seiki Gohkin product will be equipped with interchangeable parts. Two different left arms are included in the box, one of them is the damaged one as seen in the OVA and the manga to reproduce all the Getter poses in its final moments.

3 - The Getter Core is made by a new material to allow the glow in the dark effect and needed to be partially re-sculpted. Tubes were also added.

4 - New accessories: beside the interchangeable left arm, the new Getter Core and the standard set of spare hands (six in total) a new hand to hold the Getter Core has been added, the two Getter Tomahawk are painted in a new weathering style and an exclusive bonus figure of Musashi Tomoe that is the solely Getter pilot in this final battle.

Production quantity: This item will be produced only in 1500 pieces, each one of them will have a sticker with the serial number on it (ex. 0001/1500) to certify the limited production run.

Paint: we took so long to put this item in production because of the huge paint-job required. We have been turned down two times by the factory that told us that this model was "undo-able". Finally we studied a new paint-job system and we were allowed to start the production. A normal item is usually completed after 30 to 40 paint steps, for this one over 180 were required... It was a huge task and we really hope you will appreciate it. As for now we can officially declare that there won't be any reissue, recolor or anything else after the first production run (that is common on Anime-Export products by the way) due to the huge costs required for the production.

It is a one-shot item and we consider it our masterpiece so far.. get it now!"

Getter 1 comes in a great color box with full color renderings on the front and back. The sticker denoting the number is on the front. 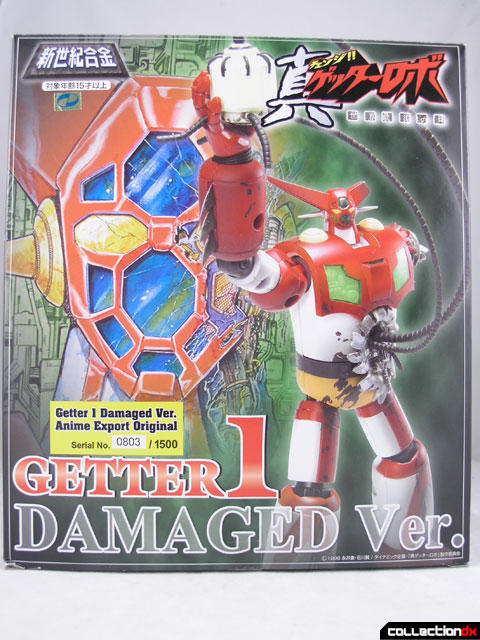 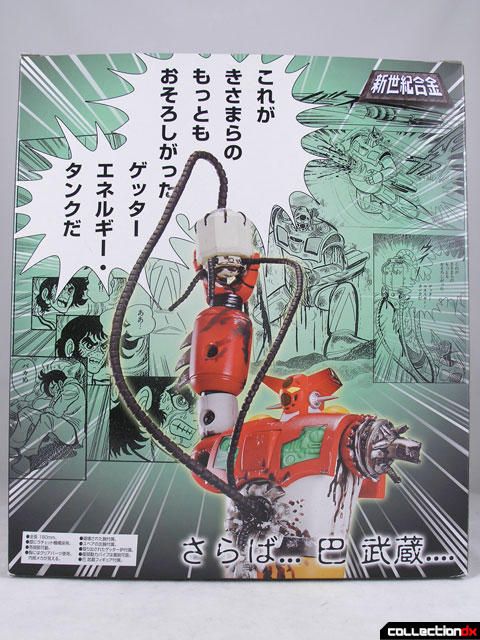 The paint detail on this damaged version is really nice - it looks like it has been beat to hell. In some places you can actually see brush strokes, but i really don't mind. Its clear a lot of work went into the paint on this. And it really is damaged. The head is missing one of its spikes, and the chest has the guts of Getter 1 spilling out. 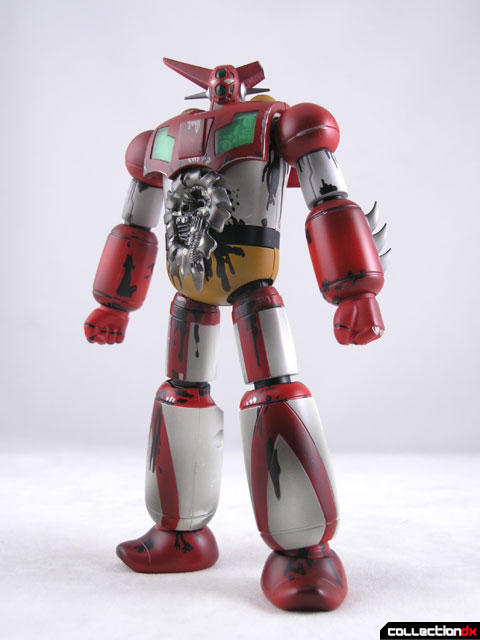 Two Getter Tomahawks are included, and the hands to hold them both. 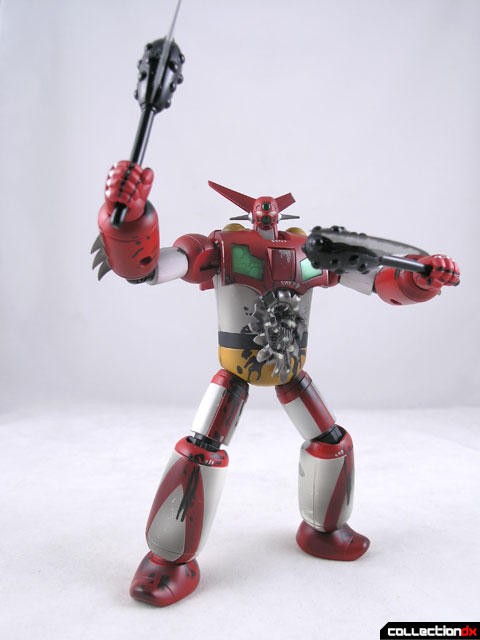 The elbows have that extending elbow gimmick that Aoshima is famous for. 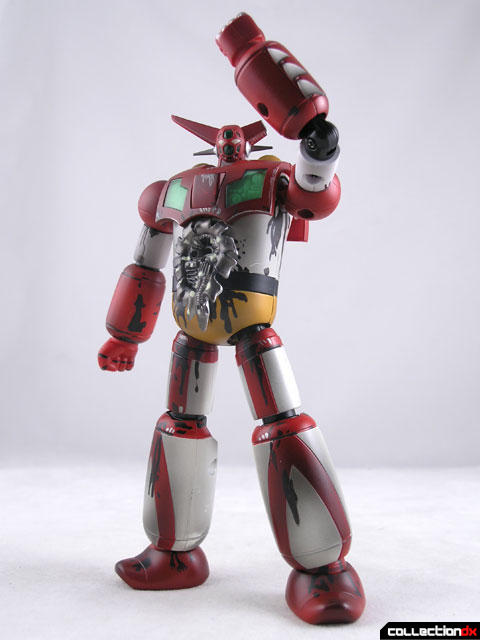 From the back, there are plenty of exposed screw holes. I wish these were covered up, but it does give the toy that old school feel. 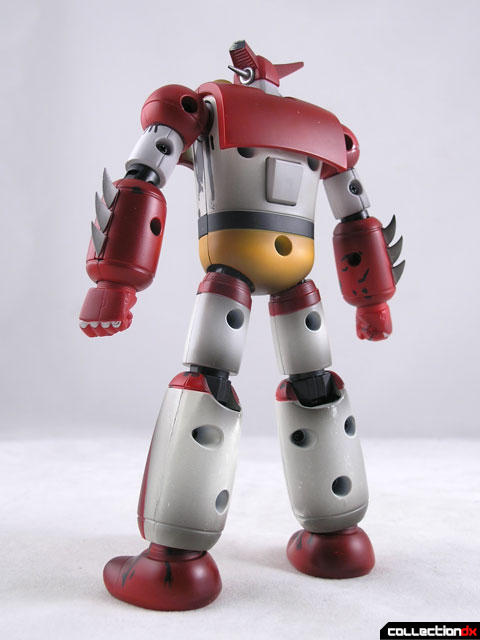 The left arm is removable, and you can replace it with a "stump" of sorts. The stump has glow paint on the tips of the wires. 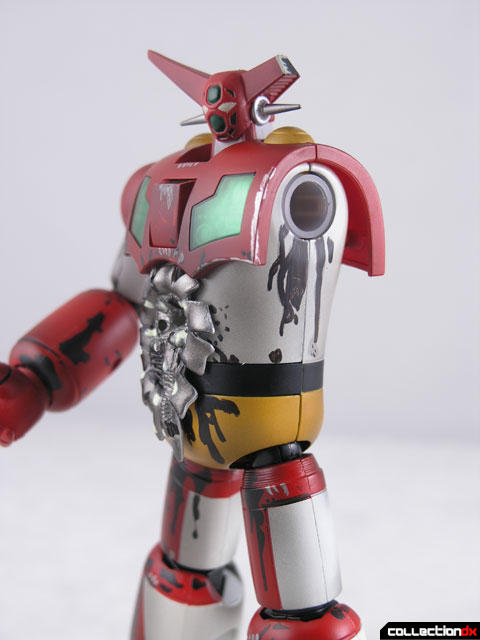 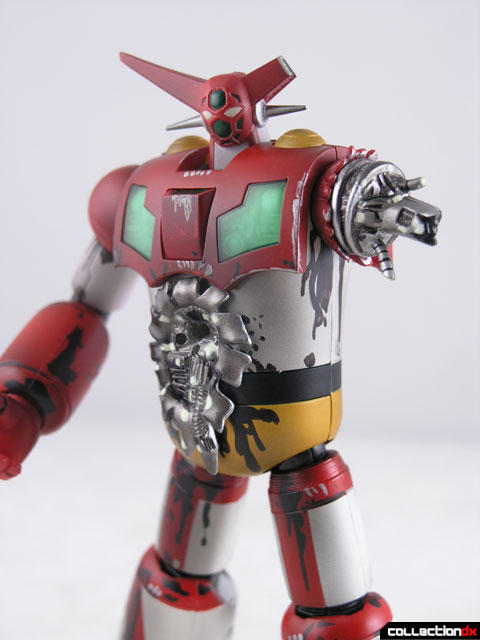 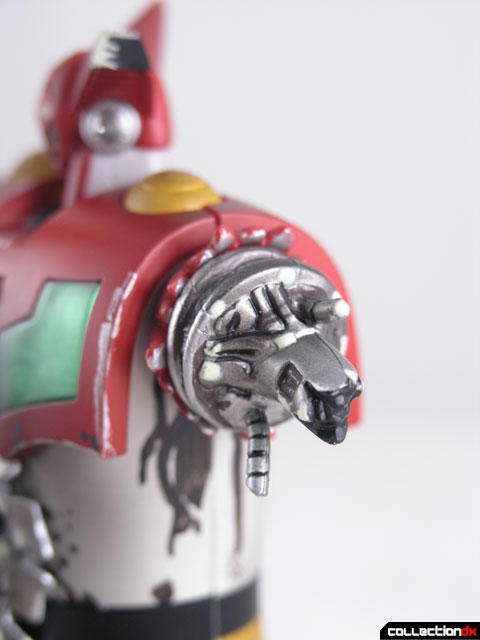 To replicate the final moments of Getter 1, You need to change the right hand to an open hand, and attach the getter core to the damaged chest section. 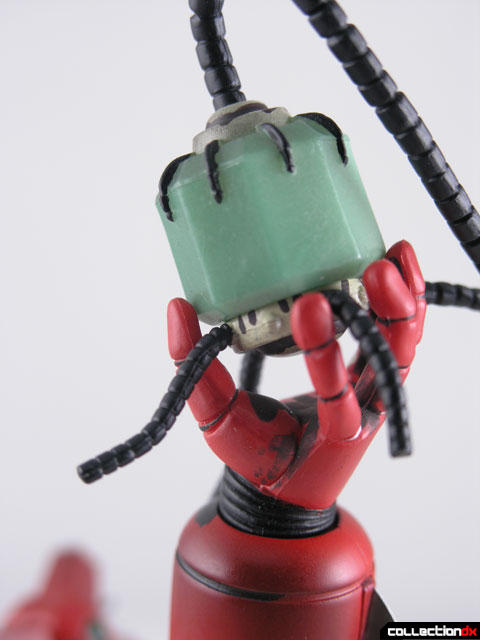 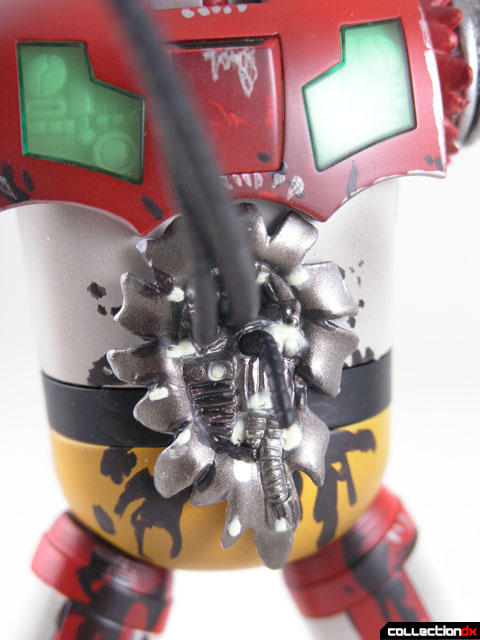 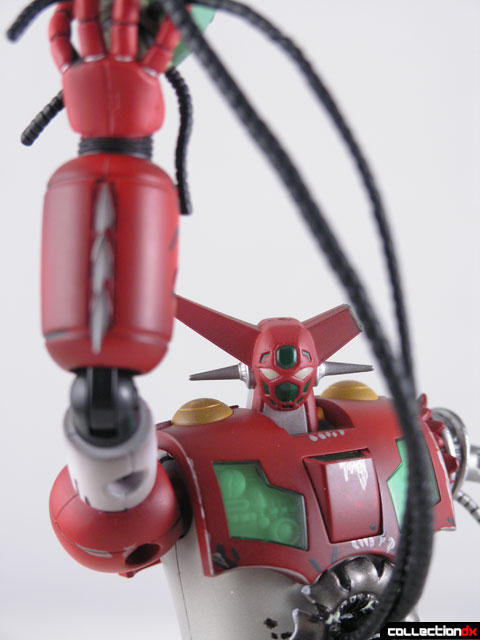 Turn the lights out, because this thing glows! 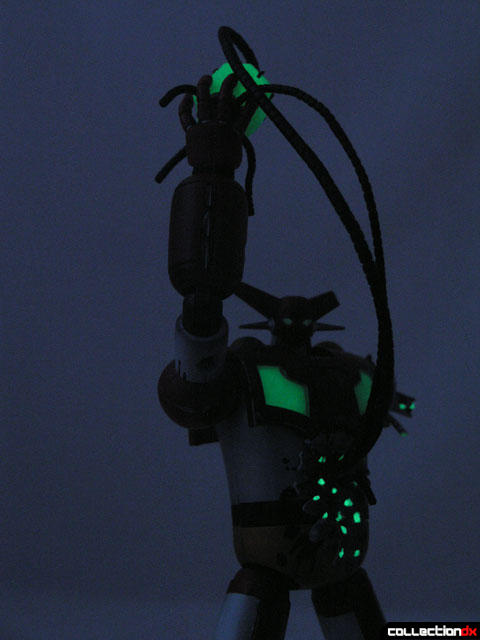 Not only do does the Getter Core glow, but so do the eyes, chest panel, wire tips... it is really stunning in the dark.

Included with the Getter 1 is a small figurine of Musashi Tomoe, the sole pilot at the demise of Getter Robo. 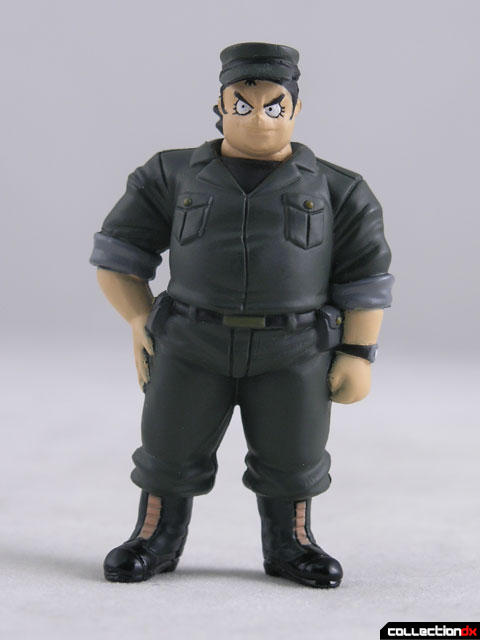 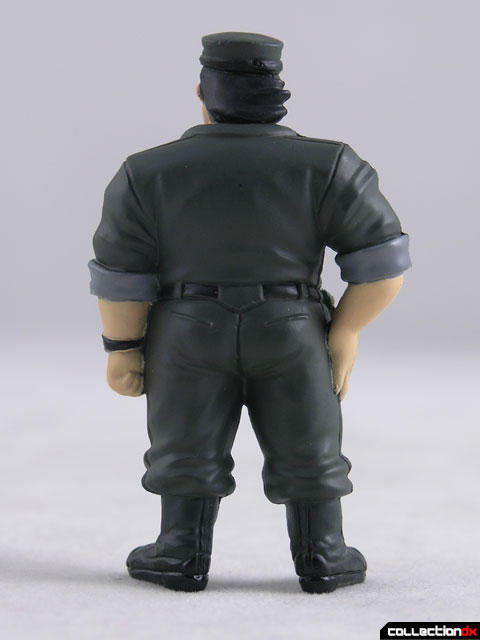 I know people tend to shy away from repaints, but I assure you, this is no ordinary repaint. This is almost an entirely new toy, and definitely worth having in your chogokin collection.

The only place you can get your Damaged Getter 1 is at Anime-Export.

Looked fantastic until i saw all the screwholes in the back

I hate you for making me want this. Really.

I'm with the general consensus that this looks sweet, but it's a little pricey for me at the moment. If I have more than say...$20-40 a week to spend on toys, it's rare.

This one at my local hobby store. The price tag keep me off this one. But after seeing the review and my wife is asking what I wish for my birthday...

Can't say I'm a huge fan, especially for that price, but I really like the idea of incorporating GLOW into gokin!

first, all the screwholes on the back, made it looks like it's been screwed all over and again, literally.
second, the steep price. in this age of heavily finished SOCs, this one looks like it's been prepared rather hurriedly. look at the sides... all the horrid gaps between the front and the back plates.
third, as i took a careful watch on a local toyshop... the damaged part doesn't look all that metallic.

for such a price, it's not a good bargain for me.