To this date the Volks's A3 line has the most extensive range of Muv-Luv merchandise. It has covered all the major Tactical Surface Fighter designs and just about every variant thereof. While some appear quite frequently on the aftermarket for reasonable prices, others pop up once in a BETA infested moon and command exorbitant amounts of yen. For whatever reason, the F-15･ACTV Active Eagle tended to run at least the equivalent to $110 USD. When I saw a lonely used one Mandarake for just 2,500 yen (about $25), I quickly scooped it up. So how does this rare bird fare? Let's find out. 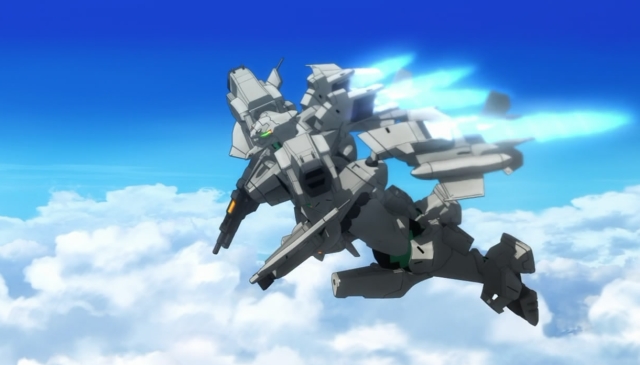 One of Argos Test Flight's Active Eagles blasts through the air while trying to avoid an international incident during the third episode of Total Eclipse. 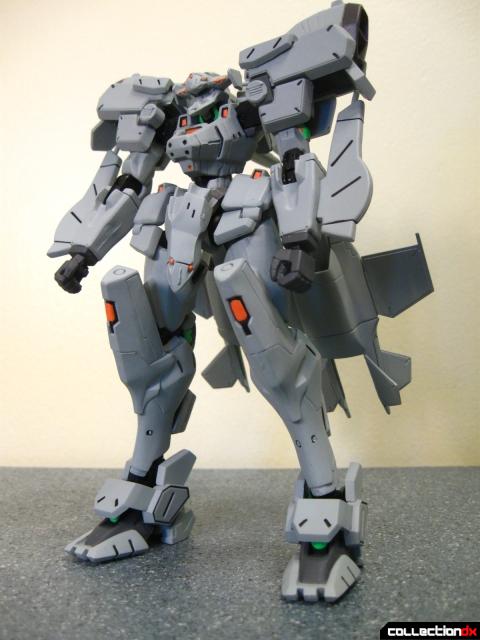 The F-15･ACTV Active Eagle was the tenth normal retail release in Volks's A3 line and hails from the Muv-Luv Alternative spinoff: Total Eclipse. Interestingly enough I have heard the A3 line was tied in heavily with Total Eclipse as the latter was conceived as a way to create more Tactical Surface Fighters that could be made into action figures. In universe, the Active Eagle is described as a test bed for upgrading all F-15's through the use of more powerful jump units and extra thrusters all over. 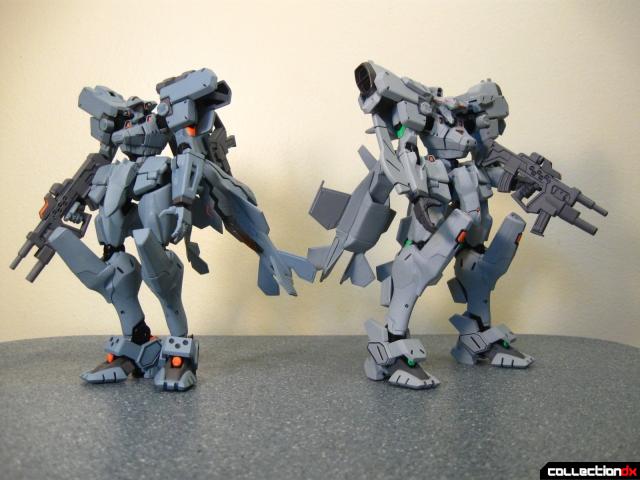 Naturally this figure shares a great number of components with the Strike Eagle as both were released the same year. The name and function of the Active Eagle is derived from its real life namesake, the F-15 ACTIVE. Both were technology demonstrators that aimed to show how an existing air frame can stay on the cutting edge without the need of a whole new machine. Like the regular Strike Eagle, the Active Eagle figure stands about 6 inches tall is made mostly out of thick PVC plastic. 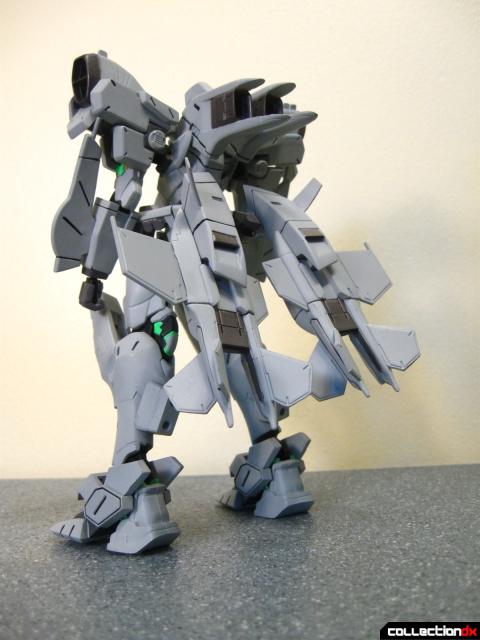 The Active Eagle is absolutely brimming with extra engine nozzles for increased performance. 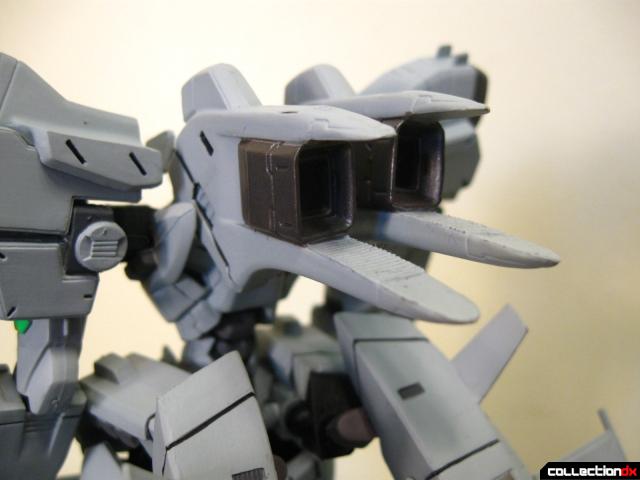 In addition to the upgraded jump units attached to its waist, the Active Eagle sports a pair of additional boosters that take the place of the usual mount pylons. 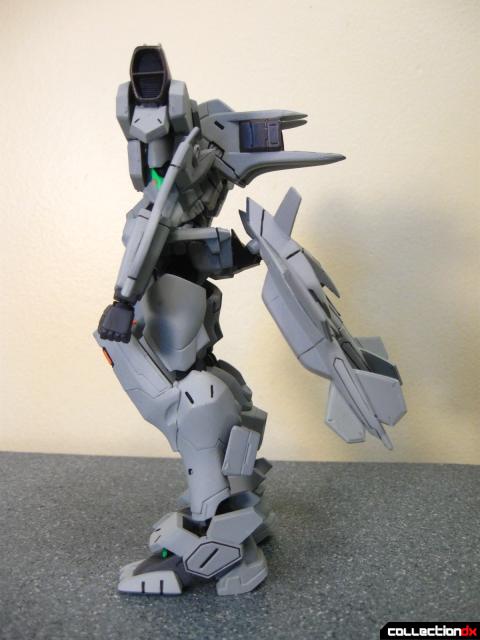 Even with the extra equipment, the Active Eagle is no touchier than most A3 figures when it comes to balancing. It helps that the jump units only stick out a fairly gentle angle. 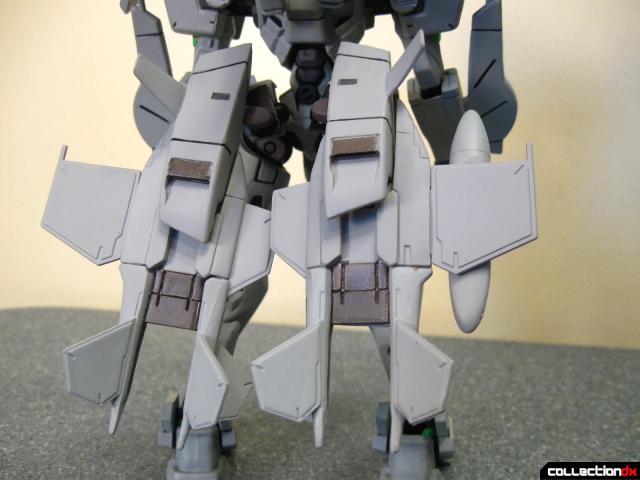 The jump units feature an interesting gimmick in where the wings can be swapped out with a pair that feature additional fuel tanks. It's a nice little touch for airplane enthusiasts to show how all that extra power commands a powerful thirst. 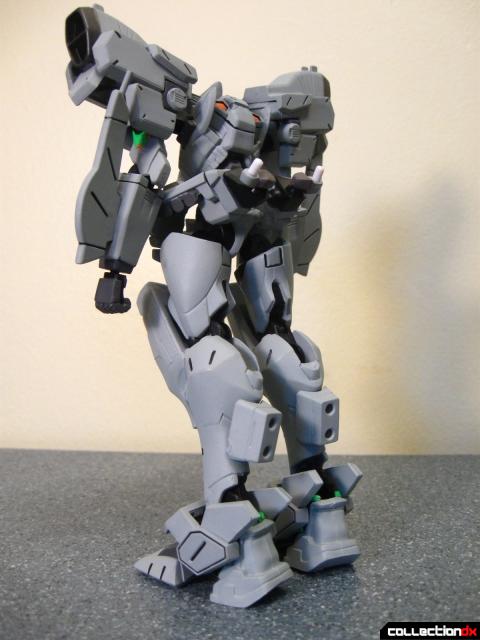 Even without the additional engines, the base Active Eagle still sports a number of new parts such as the large arm mounted sensors and a some calf doohickeys. 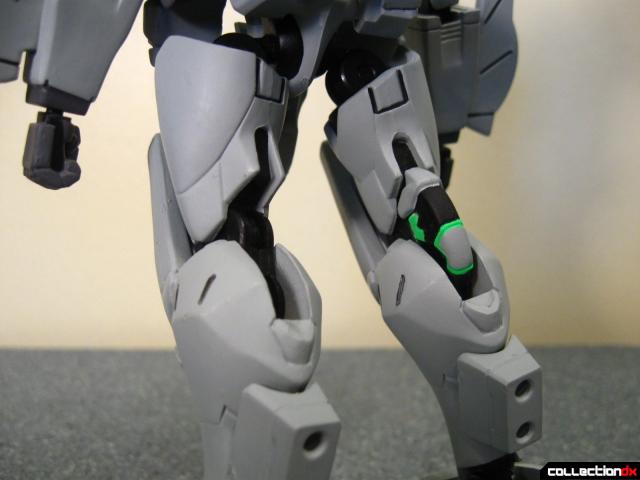 Like many A3 figures, you get a pair of fill in parts for the knee joints that completely impedes their movement in the name of line art fidelity. Again I am not a TSF knee fetishist so I usually just leave these in the box. 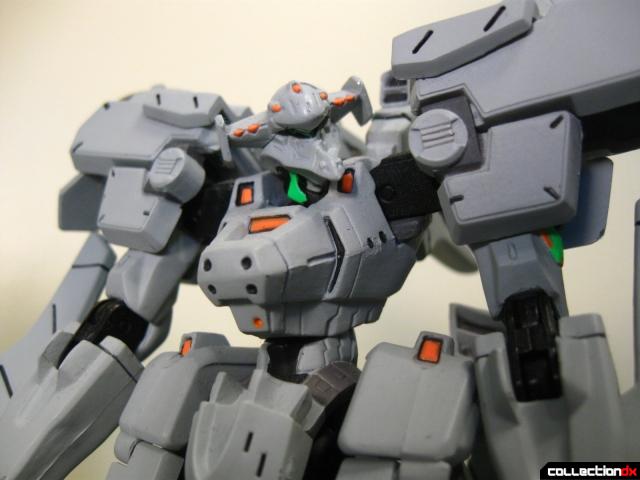 The upper body features some extensive remolding from the Strike Eagle as the torso sports additional detailing with both the shoulder pads and head being completely new. The new head is a welcome upgrade in terms of articulation and it can much more easily look to the left or right even when the additional back boosters are attached. The beefy thrust vectoring engines in the shoulders are a nod to the modified engines seen on the real F-15 ACTIVE. These new shoulders do retain the moving flaps that angle up when the bicep is rotated. Also note that the skirt armor even have additional orange colored sensors. Even the nosecone-like codpiece has more detailing. 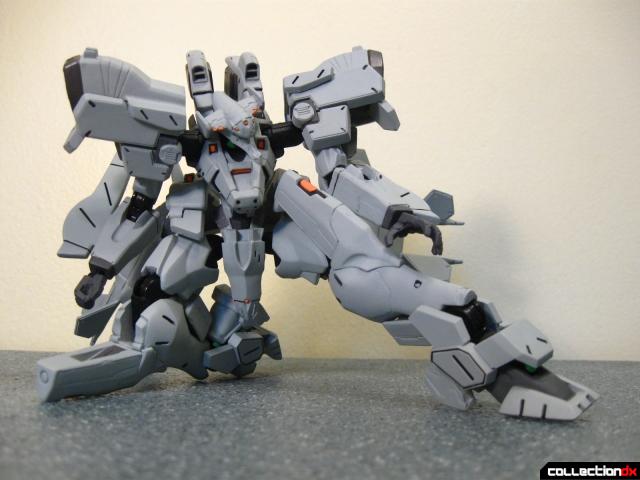 Aside form the head, the Active Eagle's articulation is largely the same as the Strike Eagle's. The only other major improvement is how the open ended ankle guards let the Active Eagle do a little more stretching before battle. With the toes pointing forward like that, the whole leg kind of look like a dragon with a single green eye. 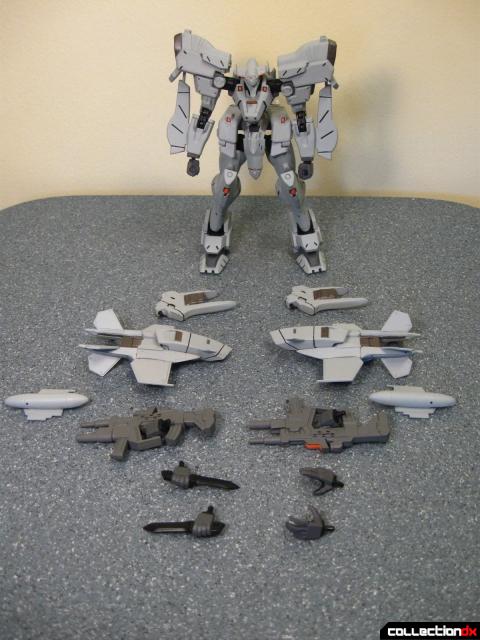 In terms of accessories, the Active Eagle is a "what you see is what you get" kind of figure. With the space for mount pylons being allocated to the additional boosters, you only get a pair of guns for its main armament with the usual American close combat weapons consisting of a pair of knives. Rounding things out is a pair of splayed hands and fists. 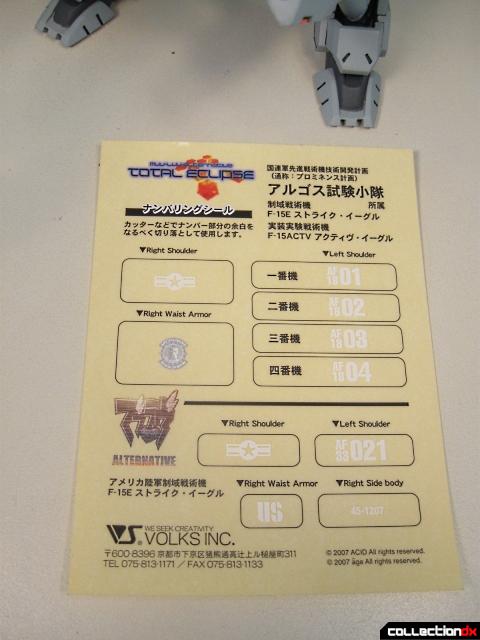 You also get a set of uncut decals. These are identical to the set that comes with the Strike Eagle. They are clear sticky type markings. 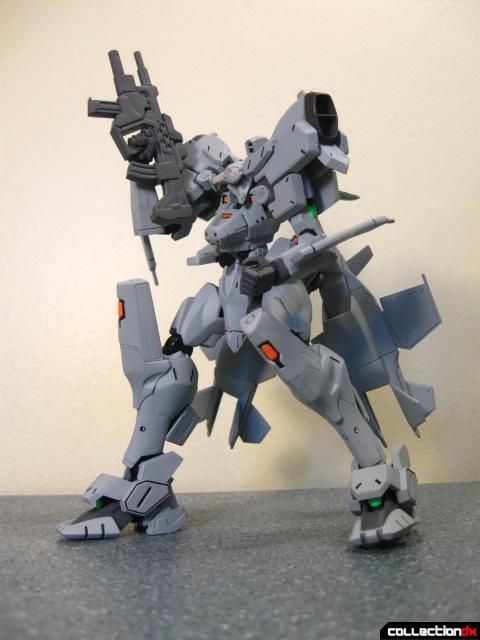 As an action figure, the Active Eagle is a fairly competent one. The A-Lock joints provide a good range of motion with the stability of ratcheted clicks. As the joints are limited to a certain number of clicks in any direction, finding the right position for a good pose is key. 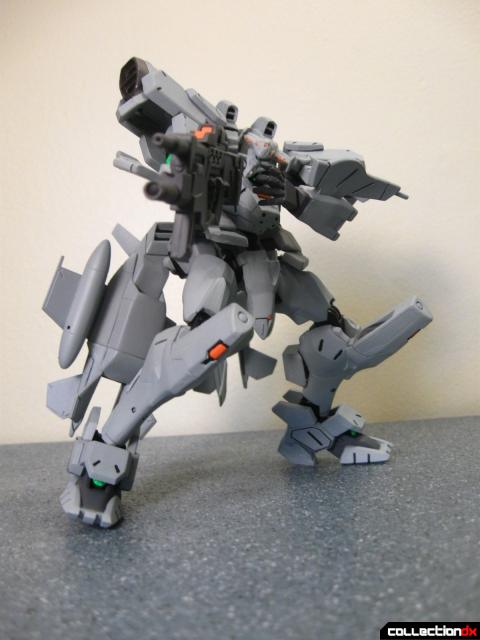 Despite coming from a high end doll and garage kit maker, A3 figures have the design sense of a retail level collector's toy. They're not exactly Robot Damashii level, more like upscale Revoltechs. 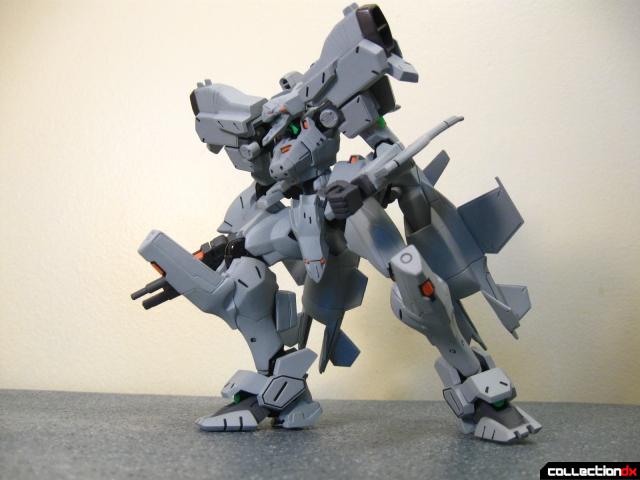 The aircraft gray coloring on the Active Eagle strengthens its connection with the real life warplanes that inspired Tactical Surface Fighters. Like the Strike Eagle, the paint is a little thick and rough in places with a few of the small moving flaps suffering from some paint gluing. Fortunately I have a friend who is a master modeler to help fix a minor break on one of the skirt armor's movable flaps. Although I think he may have sacrificed a pigeon to get the part back to me. 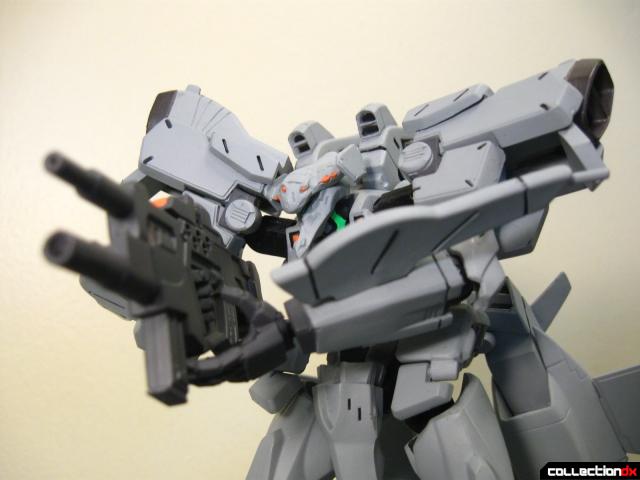 Like most TSF's, the Active Eagle looks quite intimidating. 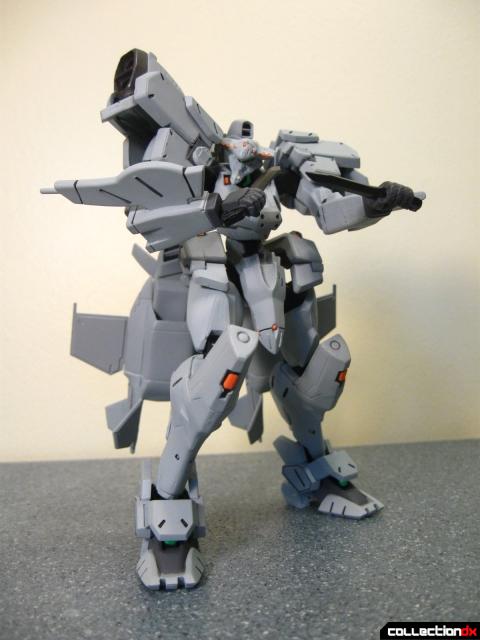 While the knives are good and straight, the big sensors on the arms tend to bend due to the softness of the PVC. 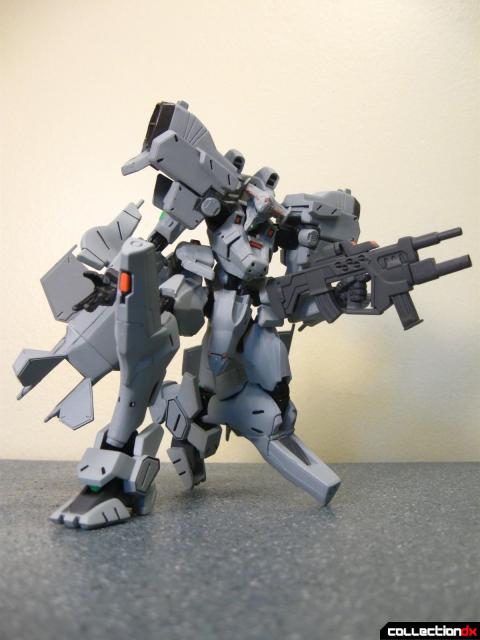 Thanks to its movable skirts, the Active Eagle can achieve a decent kneeling pose. 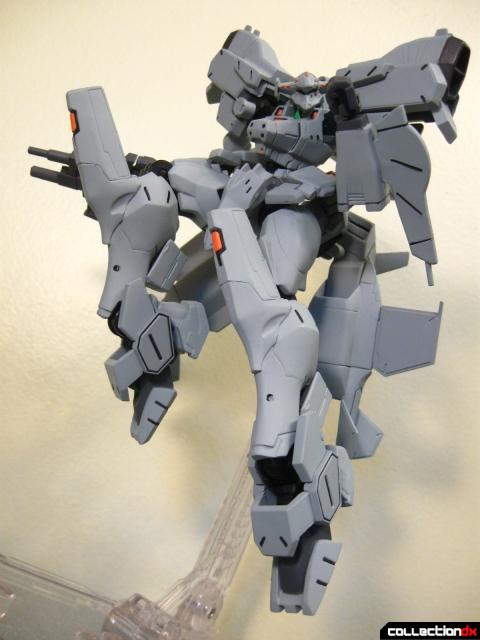 With a strong display stand such as a Yamato Might Block base, the Active Eagle can take flight. It can be hard to find good place to mount these guys in a stand as their inherent back heaviness makes them want to lean back. 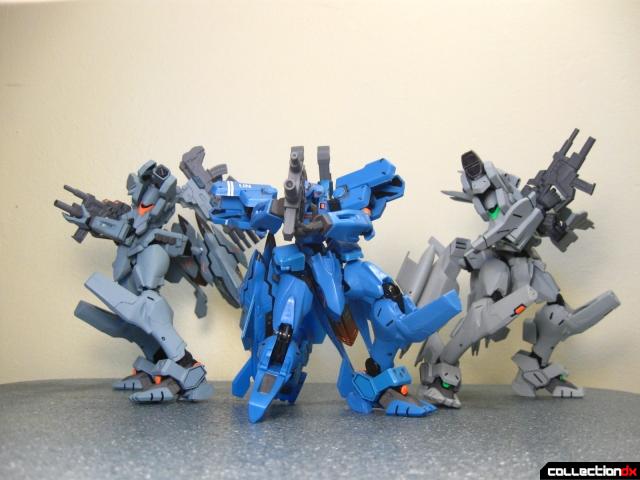 Overall the Active Eagle is simply a more elaborate looking version of the regular Strike Eagle. As an early entry in the A3 line, it is a competent action figure that is especially fun for Muv-Luv fans. It doesn't quite have the fit and finish of later A3 figures like the F-4J Kai Zuikaku or the F-16 Fighting Falcon but is a good presentation of the Active Eagle. For the lack of any other merchandise of this design, it fills the niche with workmanlike execution. I wouldn't pay above its MSRP for it so try to find a good deal on places like Mandarake or Yahoo Japan auctions.

What, no comparison image of this handsome guy?
http://www.nasa.gov/centers/dryden/multimedia/imagegallery/F-15ACTIVE/index.html

My big book of fighter jets only covers airplanes that were put into active duty so not prototypes or test beds. Hence why Black Widow san got slighted in his review.