Just what the world needs, another Evangelion toy. 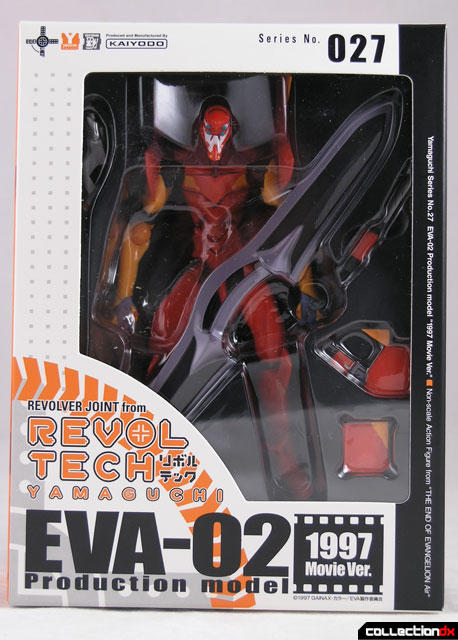 Its not that I don’t like Evangelion; I recognize its importance in the history of Anime, and in robot design. It is just that there have been SO MANY toys of the Evangelion designs. I suppose if you are a super fan this is a godsend. But for a semi-fan, there are very few Eva toys that get me going anymore.

For those of you who have been living under a rock, Eva-02 comes from the series Neon Genesis Evangelion,  (新世紀エヴァンゲリオン ) an influential anime that ran for 26 episodes.  Eva-02 was piloted by Asuka Langley Soryu, a red-headed German girl. 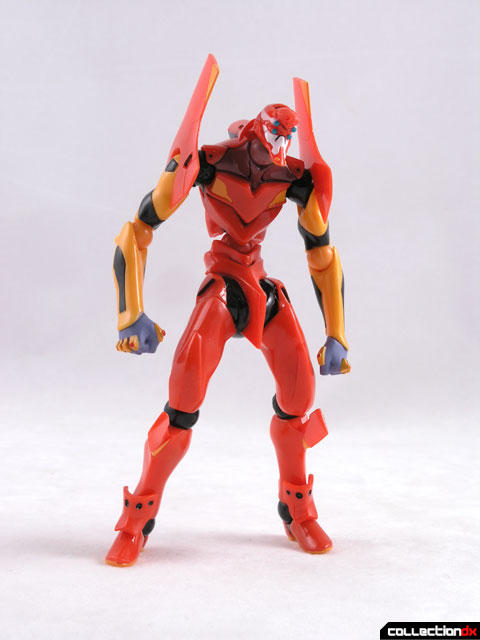 For those who have been following the Revoltech line, you know that Kaiyodo had already released an Eva-02 figure in July of 2006 (Revoltech number 006). This new version reviewed here is from the 1997 Evangelion movies, and has a different sculpt and different accessories. 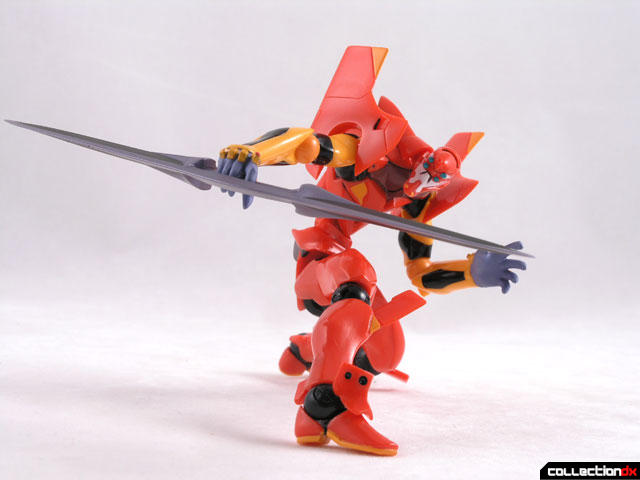 Eva-02 (Movie version) is fully articulated with 10 Revoltech joints. The hands and hips are standard monoshaft joints. The toy comes with several different hands but the hands are a real pain to replace. The shafts are too tight and the arms are too smooth to get a good grip on.

The shoulder blades are thinner and more dynamic than on the previous version. This toy features swappable shoulder blades that can be replaced with a weapons bank or a simulated open compartment for Unit 02’s knife.

Eva-02 includes 2 weapons. First is a large double bladed weapon. This weapon can be held with one of the hands specifically designed to do so. Second is the Progressive Knife. This knife looks like a mini X-Acto knife and I thought it was real metal at first. It is just hard plastic.

Finally, Eva-02 includes a power cord and a two part stand. The power cord is made of a rubber coated wire that allows it to be used as support for difficult positions. The Stand is a two part stand with a Revoltech joint at the end. The joint can connect between the legs or on the back.

This is a perfectly fine figure. If you like Evangelion, you will love this. But I think I am personally getting a little bored of the designs. You can get yours at HobbyLink Japan. 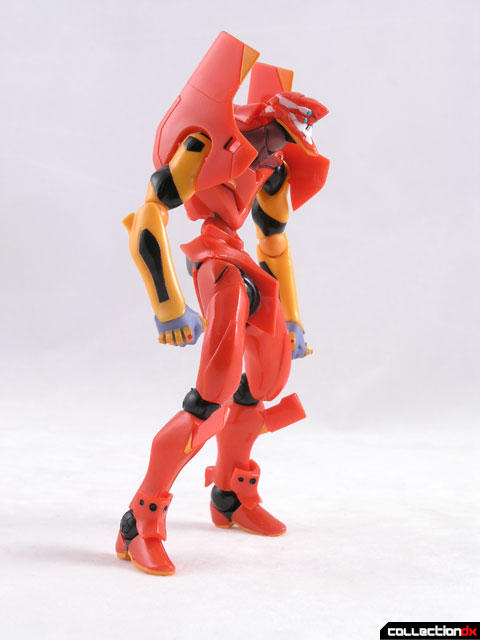 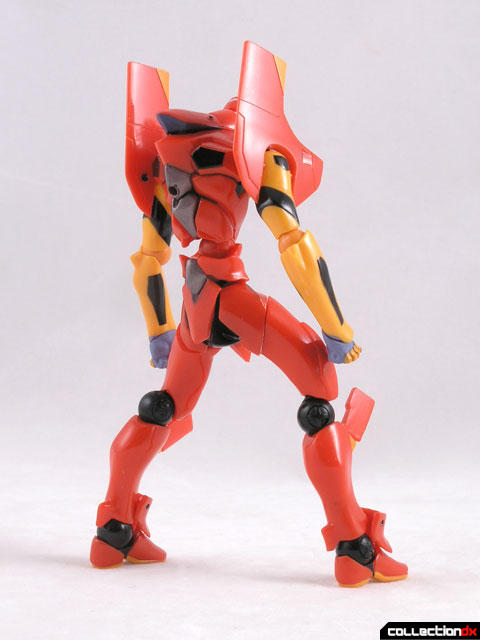 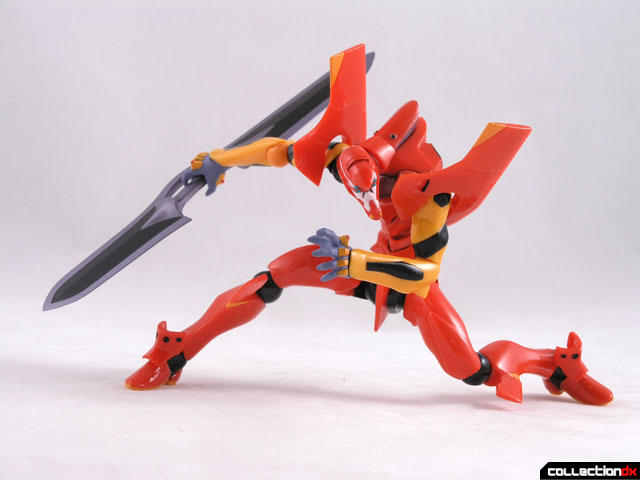 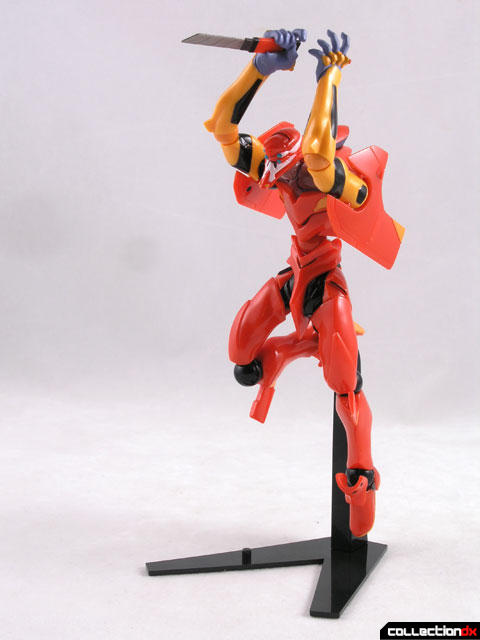 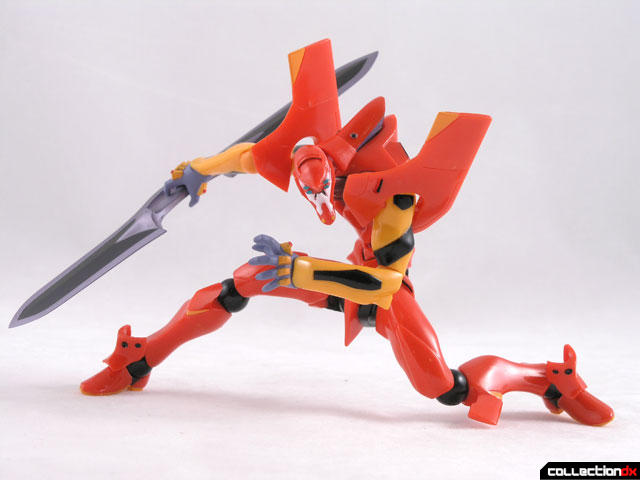 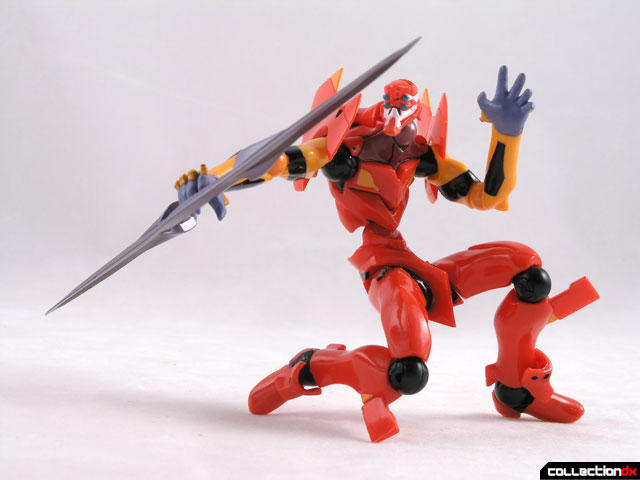 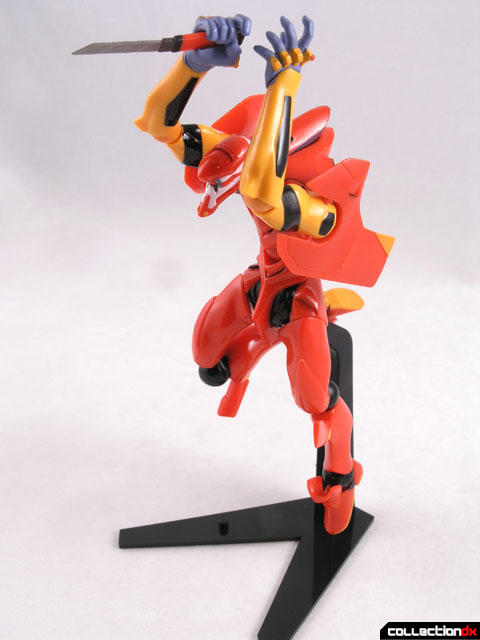 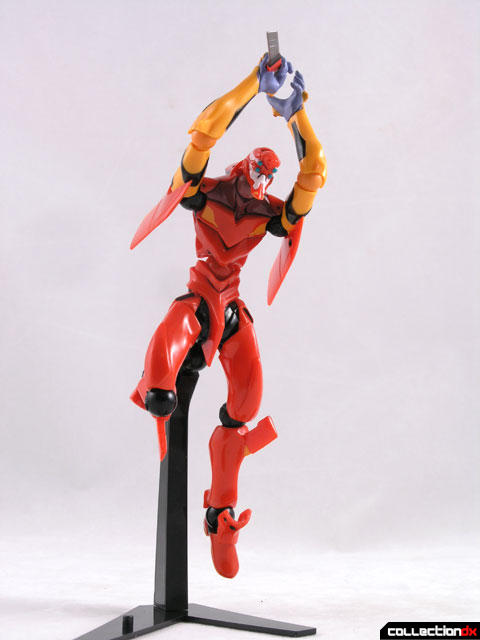 I haven't seen "The End of Evangelion" yet. However, I have learned that this redesign is no different from what happened with the five lead Gundams from the "Gundam Wing- Endless Waltz" movie- though they look and function differently from their series counterparts, as far as continuity is concerned they always looked like that. Same thing here. The only new things seen in "The End of Evangelion" on Unit-02 here is the 'dart shooter' in the right utility wing; and they added that spare double-bladed sword which the Mass Production EVAs wield.
.
Though I'm not the biggest fan on Unit-02's design in general (the red and orange don't work right for some reason), I'm even less of a fan of this redesigned style.

Boooooo.....another figure from revotech....i really think they should advance their figures a little. maybe upgrade the plastic, paint, and such. i seen these babys up close, and they look really cheap. great articulation tho. probally best for any toy out there. i was a crazy eva fan too when i was little, but after 2 years of craz....it just died.the design is very unique, but the icon didnt last. you can look at voltes v, dancougar all day long and it wont bore you, but somehow, eva just doesnt last.

ssssooooooooooo now i know why joshb pretty much phones in his reviews of revoltech evas. all one has to do is cut one EVA's name from the review and paste in a different one and you pretty much have the rest of 'em figured out :).

here's the way i see it. i'm brand new to the toy collection scene. i'm a huge EVA fan. go ahead and do a search for evangelion action figures. if you're talking about new, in the box merch, you're talking revoltech for the most part. you'll have a few other options like a couple SoC $50+ figures (which i do plan to get mind you :) ), and then an even smaller handful of figures that are aged and overpriced.

anyway, as i was saying, if you're new to the scene, revoltech is whats out there in any quantity. and frankly with my childhood action figure collection as reference, and my good friends vast DC / Marvel colleciton, these revols flippin rock. posablility is amazing. and as far as paint quality, and durability, the ones i have so far are awesome.

and boring? fine fine we're talking about personal taste here, and there's no accounting for it from one person to the next, but this is what i LOVE about EVA's is they completely defy the Japanese mecha convention of outrageous pointy crap, giant shoulders (ok maybe some EVAs sorta have that goin haha), and bulky robo boots (*cough*dancougar*volte v*cough*) :)

what's my point? so there have been (note pass tense?) a million passes of the EVA series, revoltech is the current one and they're a dayum fine go at it. for a new guy like me, never been a better time to snag some EVAs.

Be aware of the higher-grade SOCSpec line, which is the next level up. I reviewed XS-01, and there are also "Rebuild of Evangelion" SOCSpec sets as well of Unit-00 and -01. But HobbyLink Japan has Unit-02 (SOCSpec #XS-08) up for release in April. This means that there is a strong possibility that they will also make [at the very least] Unit-00 and -00*.

The SOCSpec line EVAs are basically scaled-up versions of the regular SOCs, but with removable armor. Only bad thing with XS-01 was the neck joint was too inflexible, and some of the connector pegs & joints were really fragile-looking.

Cool thanks for the heads up EVA_Unit_4A! and great review of the XS-01. so i should try and find the updated version with the beat up parts or is that all that is available right now and need not worry?