Alright so, Eva Unit 4A reviewed was the DX Drive Max Megazord and he already complained on how crapped up it was even before he noticed and saw the mayhem that Bandai America (BOA) caused after the Drive Max set. You would say I got tricked as well and so I got this piece of contraption that now seduces me to buy the other one to complete my set.

What was I babbling about? Well, it’s of course the DX Dual Drive Megazord set with the Sonic Streaker (Gou Gou Jet). Bandai initially released a crap piece entitled DualDrive Megazord with only 2 working auxiliary zords/vehicles, which are the Drill and the Shovel. That set came with 2 dummy pieces of Mixer and Crane which I despise a lot and of course a corrected Gou Gou Dump but was completely black in colour.

I initially thought that the DualDrive (later renamed Super Drive Max Megazord) is not a set required for all of my formations and stuffs but what a great mistake I made. Without proper research I went and bought this set, the Dual Drive that seeming and looked like it had all 5 of the working auxiliary pieces. 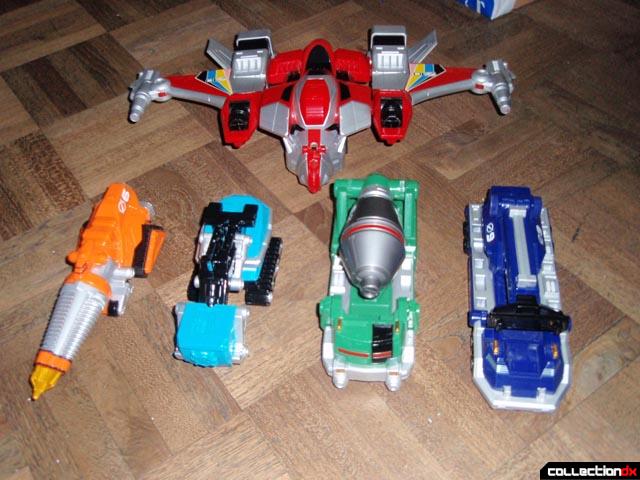 By just looking from the box and from the above photo, you will have a wrong impression thinking that this set is actually complete by itself. If you’re thinking so, look again as only 3 of the 5 auxiliary zords are in this set. The working pieces are the Jet, the Crane and the Mixer and they obviously made dummy pieces for the Drill and Shovel. 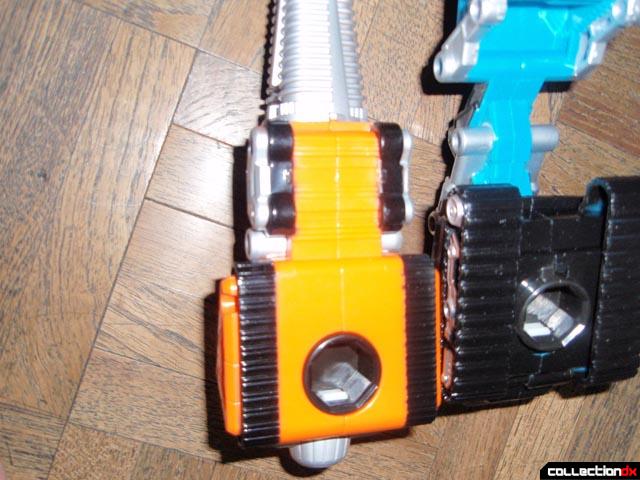 Behold the dummy sets of the Drill and Shovel that has no wheels. At first I was thinking to myself that the Japanese version wouldn’t be this crap and later I noticed that the real Drill and Shovel are in the earlier set (with the Black Dump). This seemed to be a marketing gimmick to tell us something like this [I am making this up]:

“For you collectors out there, if you want a complete set of the Drive Max series, you are now required to buy 3. Due to all of your rants and complaints, we had to release the one with the Sonic Streaker but since we already have stocks around that come with the Drill and the Shovel Drivers, we’re not including these 2 in the later set. Have Fun!” 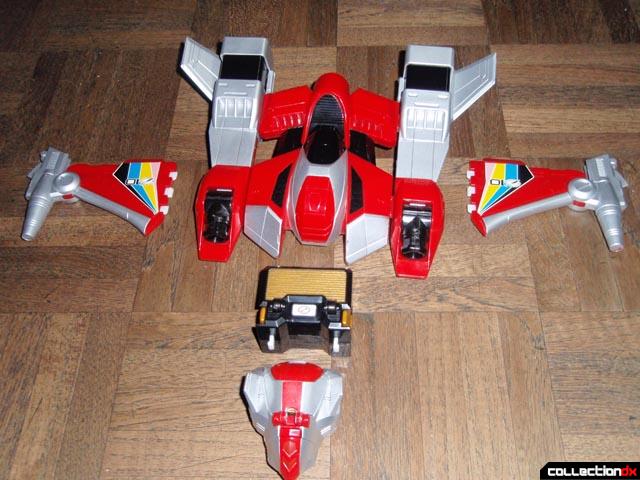 That was what I think BOA was telling us collectors to do. However not, let us get to the bottom of this. Behold, the Jet can be separated into pieces and look, the cannon on the wing tips are coloured in chrome instead of gray of the Japanese Version. The emergency cockpit part (a.k.a. Ultrazord’s head) has the press to launch mechanism removed and replaced with the electronic light and sound gimmick which I said earlier. The button is right at the top, after the flipping joints to reveal Dual Drive’s face. The electronic can only be activated automatically in Dual Drive formation. Forming the Ultrazord needs you to manually press the button. 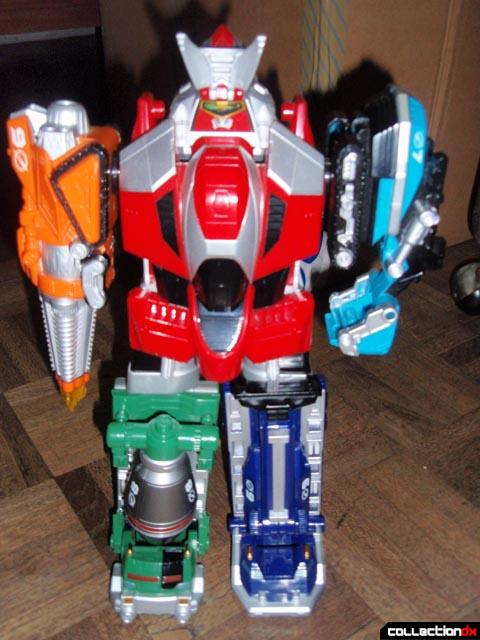 So, when you combine all 5 of these vehicles you get the real deal Dual Drive Megazord. Happy? Not even a bit. This set actually completely neglected Super Drive Max Megazord formation as the Super one was not seen anywhere in either of the Drive Max, the Super Drive Max or this one. But if you just glance through the front and the back [hyperlink photo Dual Drive Back], you’ll jump to the conclusion that this is decent. Aside from its size being actually bigger than our regular Japanese Dai Tanken, this one looks the same. 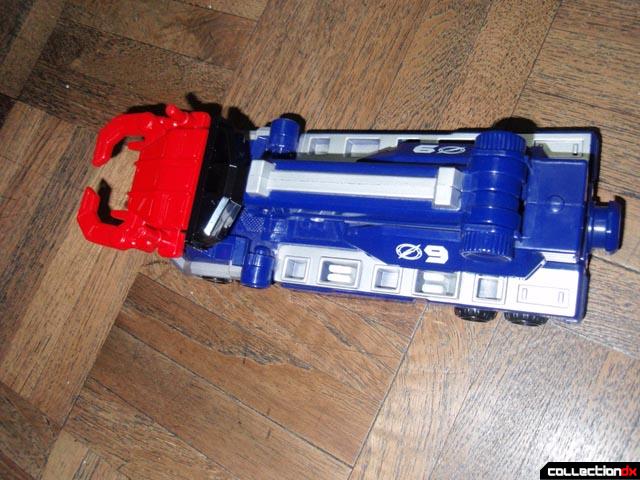 The above piece is the hook piece given in this set linked up with the Crane and yes, that’s the only hook piece for the Crane in this set. I’ll explain its uses later. This piece is actually made up of strange rubbery plastic which I think might break if you would exert too much pressure on it. Mine already has marks because of its uses and because it doesn’t stay very well and needs me to constantly press it back to place. 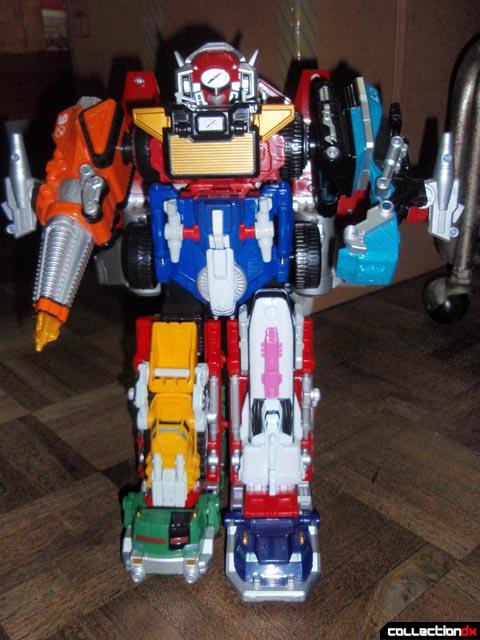 Alright so when you have this set and the Drive Max Megazord, you get to form the Drive Max Ultrazord [Ultimate Daibouken] which looks bigger. However, if you look at this Ultrazord, you will begin to wonder that BOA might only be creating the 3 sets just to have them displayed in Ultrazord mode. Why would I say that? That’s because it looks quite decent in Ultrazord mode. Of course, functions are completely gone but physical appearance still gets a pass from me. 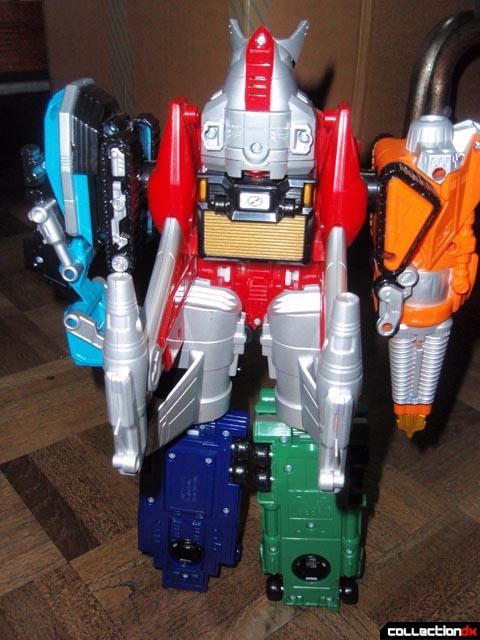 As I am praising this, there are some downfalls in this set. Remember the parts of Sonic Streaker we’ve seen above? Notice something missing? Yeah, the 2 long black pipe gears that can grab an auxiliary vehicle are missing. They really didn’t include these pieces at all and that’s why need the red hook piece for Ultimate formation. You see, the black piece in the original Ultimate Daibouken adds on to the silver grill so that the Gyro has proper slots to fit. Because they didn’t include the gears, you don’t use the silver grill to form Ultimate Daibouken but instead you just need the red piece (shown above) to link the Gyro to the mid section of the main body.

Well guys, these are what I got for the Japanese version so I am having them placed side by side for you guys to see and compare the sizes. See how big the Cement Driver is compared to the Gou Gou Mixer? I am saying it’s more than 5 centimeters longer but the functions are GONE! In this case size actually doesn’t really matter. It’s even more obvious when you prepare them to combine. 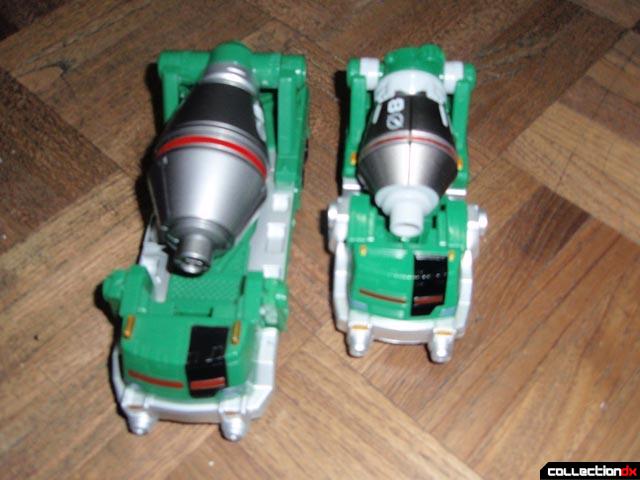 The crane was also larger but as you can see, the details on the Gou Gou Crane are obviously much more superior to the Crane Driver in almost every aspect. No extendable crane arms and no strings to play with. BOA really did this too economically. It seems that almost both the colours are different. 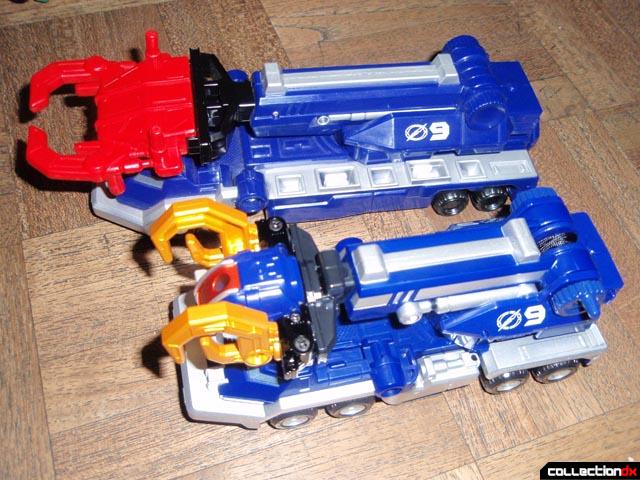 Oh well, to end this I would say that this piece is not to be a standalone piece at all. You obviously need at least 2 sets to make a combination that can be displayed decently. So, in order for you collectors out there who don’t have access to Boukenger stuffs, here is a small listing of combinations you can do with combinations from different sets.

Yeah, that’s the thing to it and finally a picture of papa feet and mama feet of the completed Ultrazord. Enjoy! 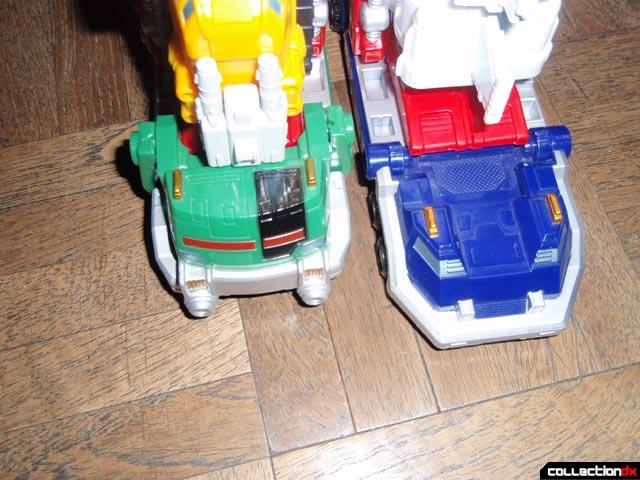 9 comments posted
While it's nice to see a new

While it's nice to see a new face, I had a hard time following this review..

Don't worry- I'm working with him behind-the-scenes to refine this craft. While having a passion for something is required, you need to be able to articulate it to someone else in a review, which may not be as intuitive as merely putting cash or a credit card down on the cashier's counter.

You should read some of my earlier reviews [from Hurricanger] and compare them with how I do it now. Though even today I am still insecure if what I am writing is good enough (we don't get numbers on the hits-per-review, QQ), my style and how I deliver that information has evolved significantly... or so I'm told.
------------------------------
CollectionDX Staff

Having read several of your reviews, I can safely say I've never been confused or lost by them. :D Writing toy reviews can be a tricky thing.

WTF is a "piece of contraption"?

To never buy any of the PR Operation overdrive by BoA. It's just... not good... they gave a great price in here, but still it can't convince me.

Hey! Did you know that red plastic hook can connect to the head of the drivemax megazord.

I think I've seen some vids on youtube mentioning about it. I just don't like it. When the BOJ versions combine, you don't have spare parts lying around aside from the Gou Gou Sword. However, if you were to do it with the 3 Megazord sets, you'll be having spare parts all around you. You'll have that strange Silver Grill piece that is supposed to be on the mid section to be out in the open and nothing to do with it. The worst part of this line is that, it's a required deal of 3 sets to make all possible formations. Atm, I can't make a decent Super Drive Max because I am not buying the Super Drive Max set first. It's like paying some bucks for another Dump and 2 chunks of light and useless plastic.

Though I am interested to see what comes out of the excess zords if I were to have all 3 sets and set them in Ultrazord mode.

I was pretty upset at the time these things were released. Ended up getting just the Drive Max and the Dual Drive 2, skipped the first Dual Drive. I regret it, as I had that one in my hands once and decided to wait until clearance. Clearance never came, it was gone the next time I was there. I might track one down eventually, might be able to give the extra Dump Truck and crappy Zords to my nephew or something.

i own all three sets. i just buy it to complete the set. the japan version is so expensive for me, thats why i buy this crappy version. i actually tried to write a review for the 1st dual drive (renamed super drivemax for second release), but it does not turn out fine.