It's official, I have completely lost track of the Getter Robots.

For those of you playing along at home, we have:

And now we have this Getter Robo, which I believe is called "New (Change!!) Getter Robo." I haven't seen a Getter anime since Getter Robo: Armageddon, and that melted my brain. This is likely the robot from "New Getter Robo", released in 2004, but who can tell anymore? 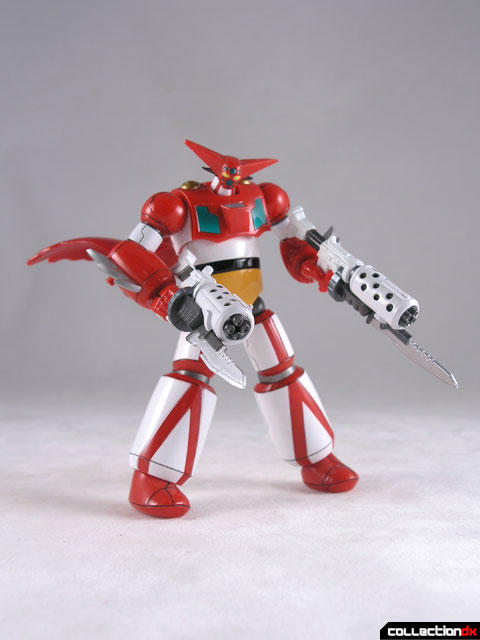 Regardless of its origins, Getter 1 is one of the latest releases in the popular Revoltech franchise. Fans have been waiting for the classic super robots to be part of the Revoltech line, but we keep getting teased with the new versions of the old characters. Getter 1 is the closest we have gotten so far. It's not a bad figure, but it's not breaking any new ground. 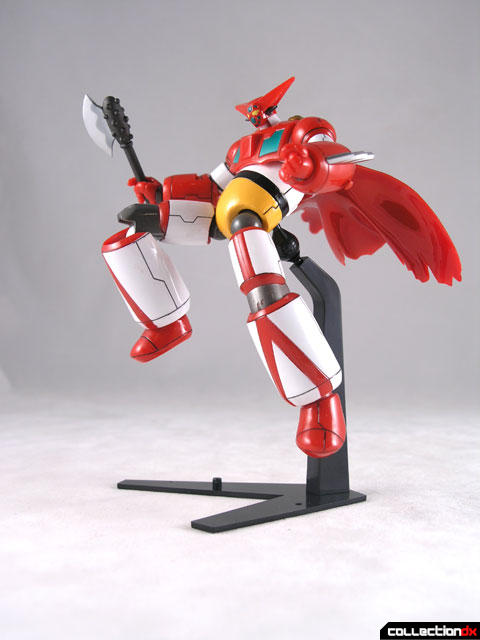 Getter 1 features 16 points of articulation - 10 of which are Revoltech joints. Kaiyodo made some odd choices here in terms of which joints got the revolver joints. For example - those round red shoulders seem to cry out for revoltech joints, but instead are 2 monoshaft joints. There's no swiveling waist joint, but there is a chest joint. The neck you would think would use the dual Revoltech joint, but only uses one (and it's kind of loose). 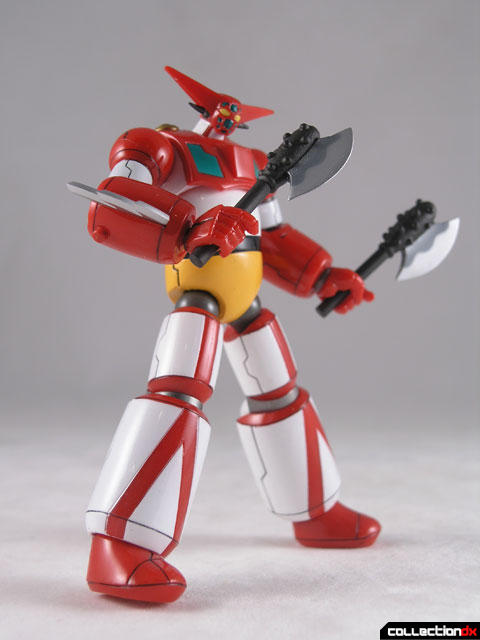 The Getter Machine guns and Getter Tomahawks fit snugly into the hands. The guns have some nice detail and look menacing. 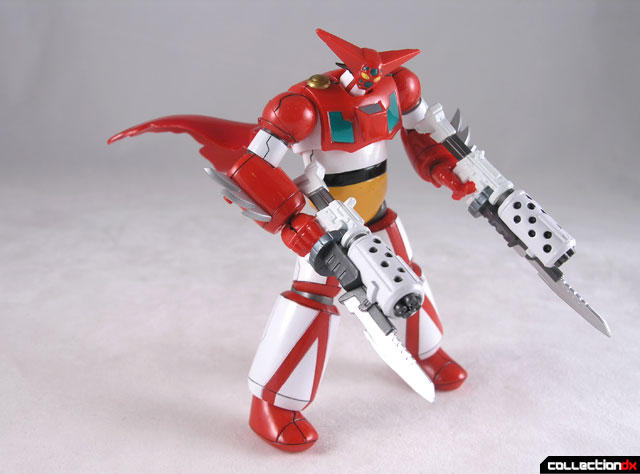 I found the Getter Wing a bit confusing - there are no instructions as to how to attach it to the figure, and the box art isn't clear. After some playing around I figured out that it basically wedges itself to the back of the shoulder armor. 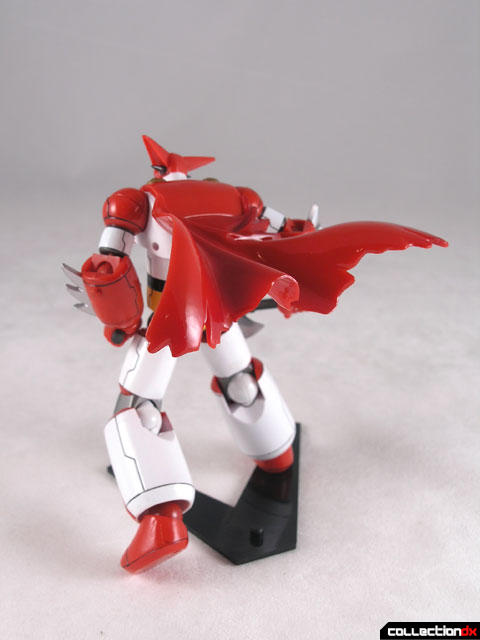 I was also left clueless about the knuckle fist and flat hand. The knuckle fist is just that - a closed fist with one knuckle out farther than the others. Nowhere does it describe what these are for. Perhaps If I had seen the anime? 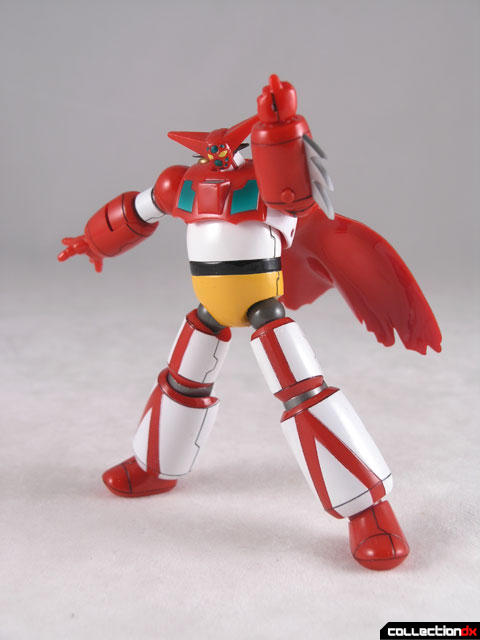 And what is up with the two holes on the back - is there any purpose for those? Maybe they get used in the black getter sculpt? They distract from an otherwise beautiful figure. 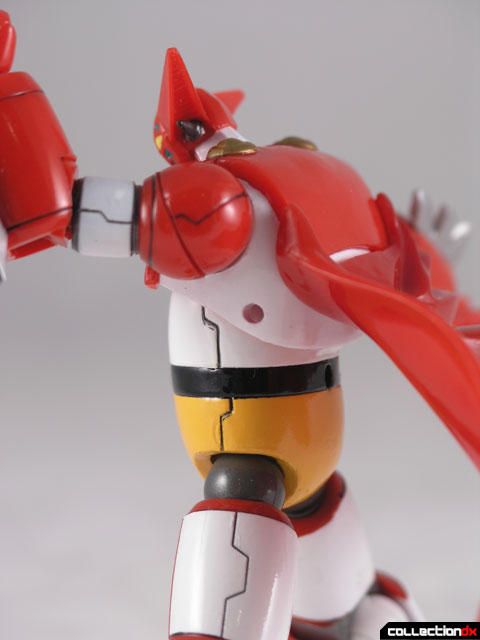 Make no mistake, Getter 1 is a nice toy. Good quality, good articulation, good play value. It just leaves me scratching my head a little trying to figure out some of the decisions they made. Perhaps I am too critical... The casual fan, and the Getter Robo collector should really dig this figure. You get get your very own at HobbyLink Japan. 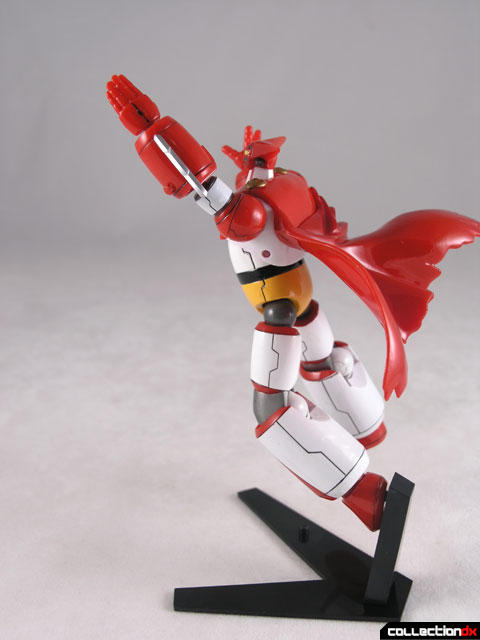 4 comments posted
This is the Getter 1 from

This is the Getter 1 from the Shin Getter OVA, aka Getter Robo: Armageddon.

I can't wait to pick up this Revoltech. My Super Robot Getter 1 was a little fragile and not nearly as posable as the Revoltechs I've got so far.

The holes on the side are to accomidate the extra accessories used on Black Getter. Kaiyodo wanted to use one mold for both toys.