I had planned on doing a review of Pegasus Seiya (the title character) to get the ball rolling and introduce our readers to the series and characters but Hagen Merak is hot, hot, hot off the presses so to be timely with this review, I am reviewing him first out of the gate. So whether you are a fan of the series or have never heard of it please read on as this is a very sharp you may not want to miss. 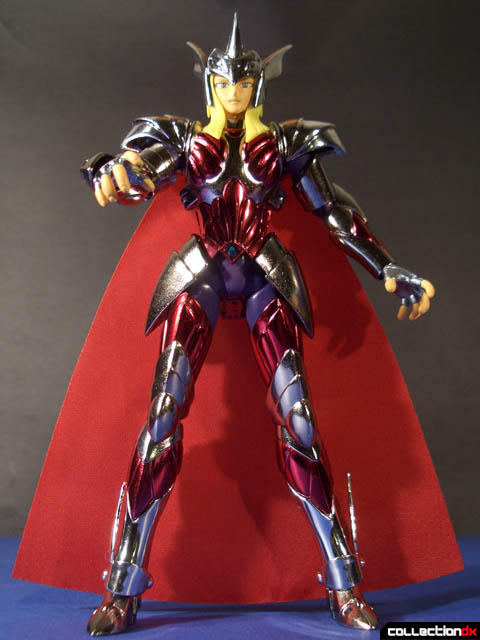 The very latest release from the Saint Cloth Myth line is Hagen Merak, one of Asgard's God Warriors.

From Wikipedia:
“Saint Seiya, also known as Knights of the Zodiac, is a manga and anime series created by Masami Kurumada. The story is about a group of five mystical warriors called the "Saints" (or "Knights"; the kanji is properly read as "holy warrior" but the furigana has it pronounced "saint") who have adopted various constellations as their guardian symbols. The anime series won the Animage Anime Grand Prix prize in 1987. The series was cancelled in 1989 because of the low ratings of the anime. However, during 2002 Toei continued the arc of the manga that was not animated in OVA format. This was called Saint Seiya: Hades and dividing them in different parts called Sanctuary-Hen, Meikai-Hen 1st and 2nd part and Elysion-Hen.”

Hagen Merak (Beta Robe) is from the Asgard story arc (episodes 74 to 99) of the original TV series. Hagen is a tragic villain, as all of Asgard has been misled into opposing our main characters and declaring war on the world. Though some of the Asgard warriors are truly villainous; Hagen was a good man who meant well but refused to believe that they where misled despite evidence to the contrary.

Back in the late 80’s, if you where into Japanese toys you had to mail away for catalogs or search the pitifully small ads in the back of anime magazines if you wanted to see the latest and greatest stuff coming out of the Far East. There was no internet to quickly find what you where looking for or meet up with other fans. In these catalogs I would see these wild character designs for something called Saint Seiya. It looked interesting but I could never find out more about it and eventually it faded from memory. Flash forward to today and Saint Seiya is still going strong (after a few years break) and is a huge success internationally (as a matter of fact it would appear the US is the only place the show has not caught on.) When the folks asked if we would be interested in reviewing these for the site I took that as a chance to take a look at the series and found it was not bad. So I jumped at the chance to give these figures a try. 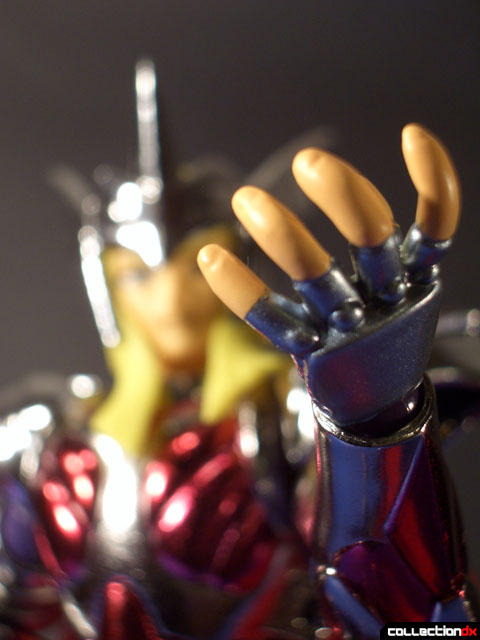 I must say I am not sorry I did. It is very clear from the moment you open the window box that this is a line that gets a lot of love and attention. The package is a beautiful four color book style box that opens to display the contents neatly with the figure and the copious amounts of accessories packed in clear vacuumed form trays.

The figure is made of ABS plastic and is very well constructed witht he feet made of diecast. The figure features over 32 points of articulation and stands a little over 6 and half inches tall. Sculpt and attention to detail is excellent and is very pose-able. The character without the Robe (Armor) looks a little spindly but honestly it’s supposed to be about the character with the armor on so it’s not a big deal to me. I feel the fact that you can take the armor on and off overrides the thinner look of the figure sans Robe (armor.) 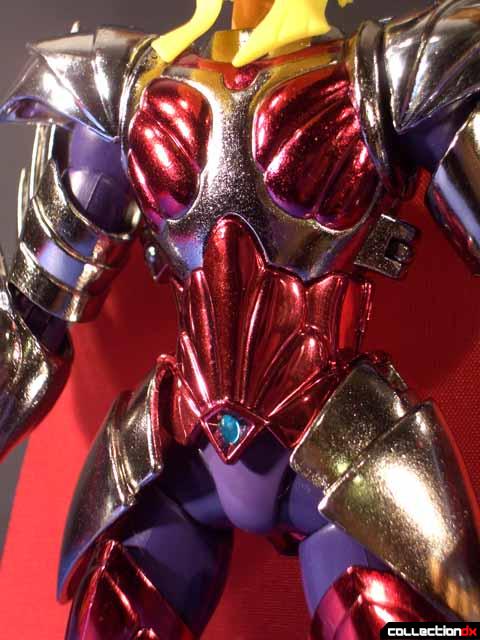 From Wikipedia:
"The God Robes represent the seven (or eight, to be more precise) stars of the Ursa Major constellation. They were created to protect Odin's legendary God Warriors. Each Robe also represents a mythological creature or object originating from Norse Mythology (such as the serpent of Midgard Jormungandr and Sleipnir, Odin's Horse)." 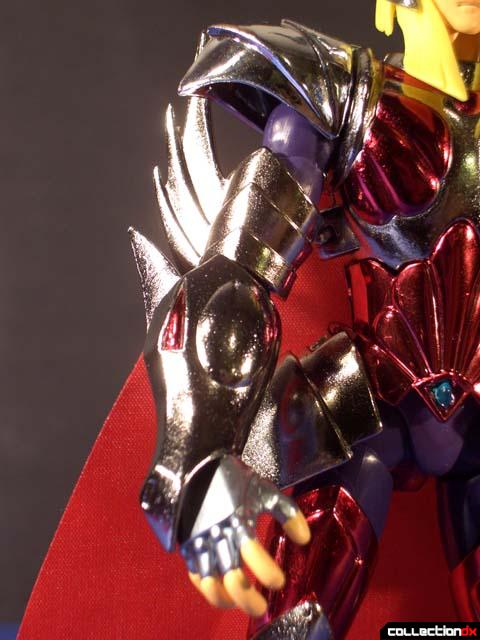 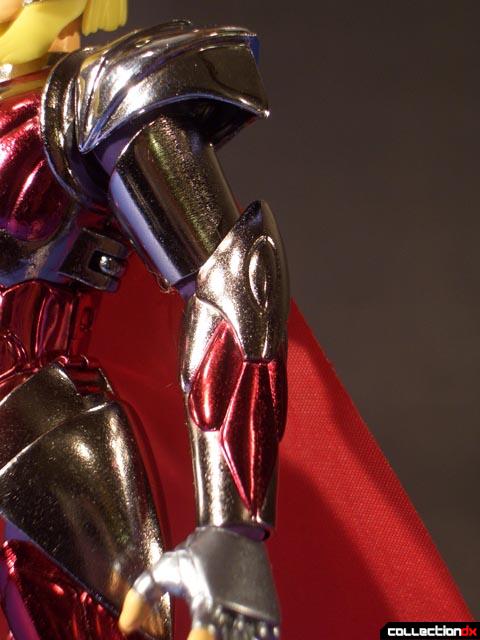 "Another characteristic of the God Robes is that each Robe has an Odin sapphire (except for Zeta Alcor). When Asgard is in need, the God Warriors can then take all seven sapphires and put them at the feet of Odin's statue, which then unlocks Odin's very own God Robe. Odin's Robe also comes with the Balmung sword." 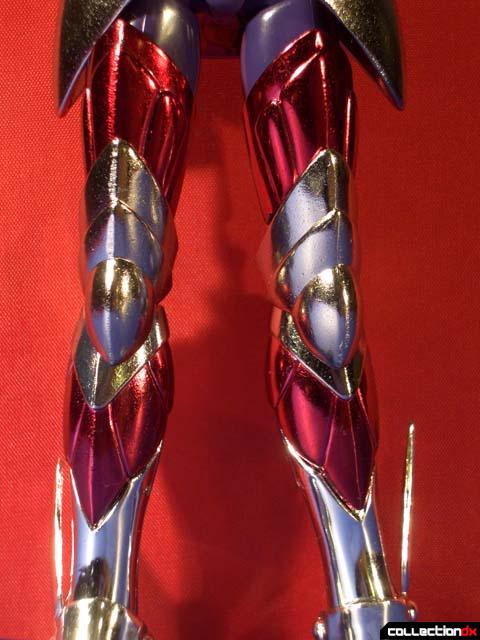 Hagen's Robe is called the Beta Robe, also known as Sleipnir, the eight-legged horse. You can see the horse motif in the arm pieces and the topaz colored Odin stone at the bottom of the torso piece. 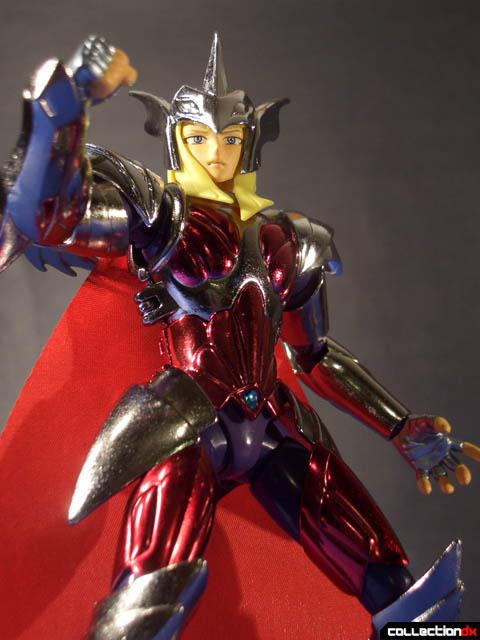 As you can see the level of detail and quality on the armor is exquisite not to mention shiny. All the armor either clips into place or in the case of the arms and legs is slid on and held by tension. This sounds like it wouldn’t work but it does. Once you have all the armor on it all stays put nicely. 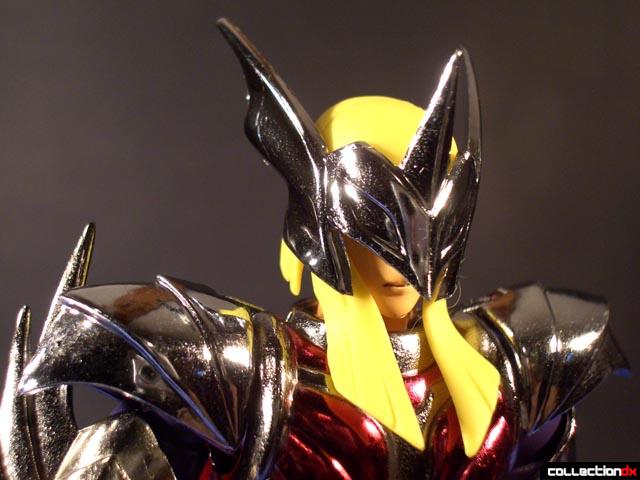 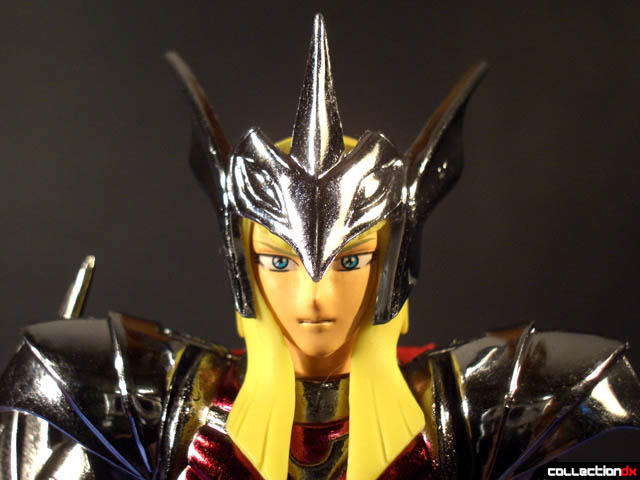 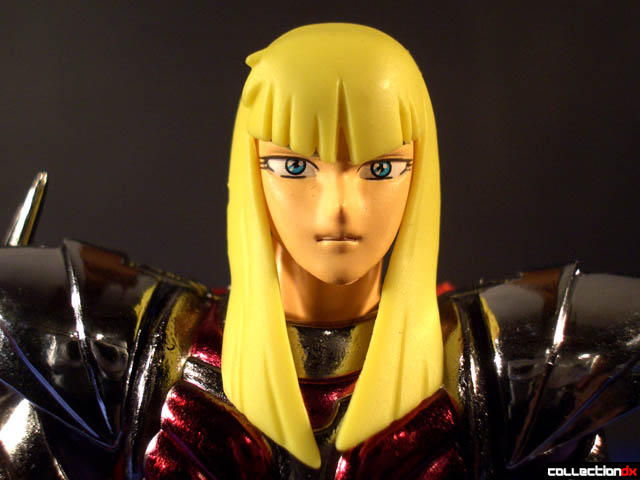 The head sculpt is excellent and they have succeeded in bringing the character designs to life. The helmet in the show features a visor that slides down over the eyes. They have given you both versions of the visor to swap out so you can choose how to display him. 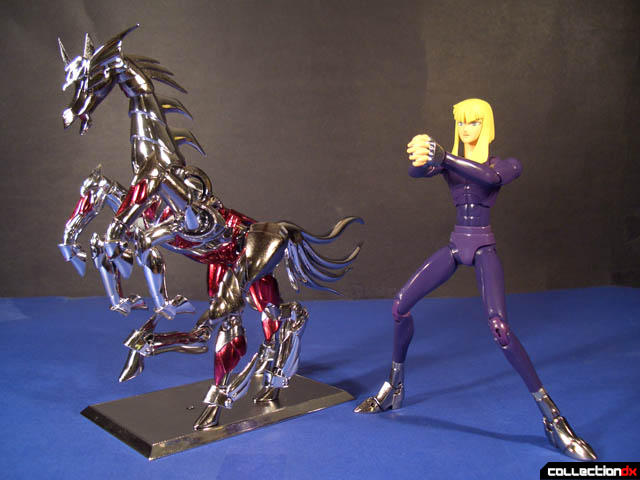 Last in this review but certainly not least is the actual Beta Object (It’s called an object on the packaging and in the show they just refer to them as cloths, but I’ll call it a statue.) When characters in the Saint Seiya universe are not using their cloths or robes (armors) the pieces form a statue of the constellation they are aligned to. 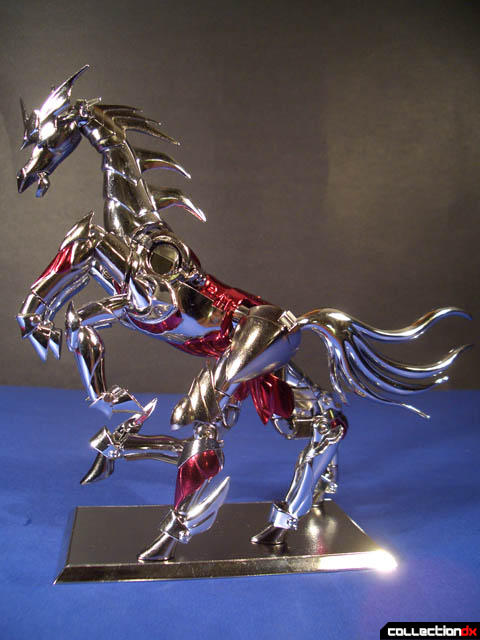 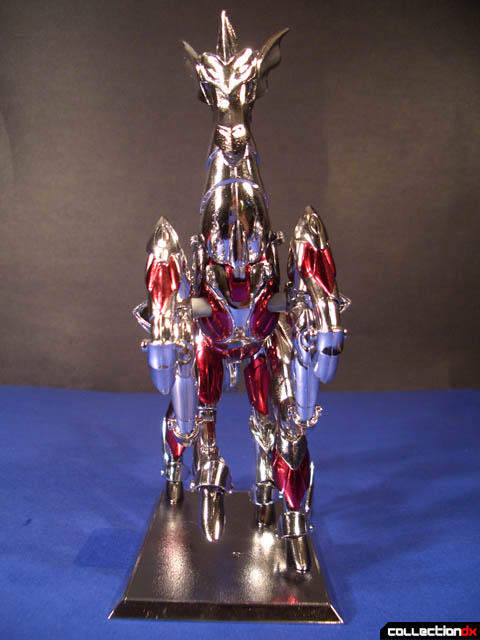 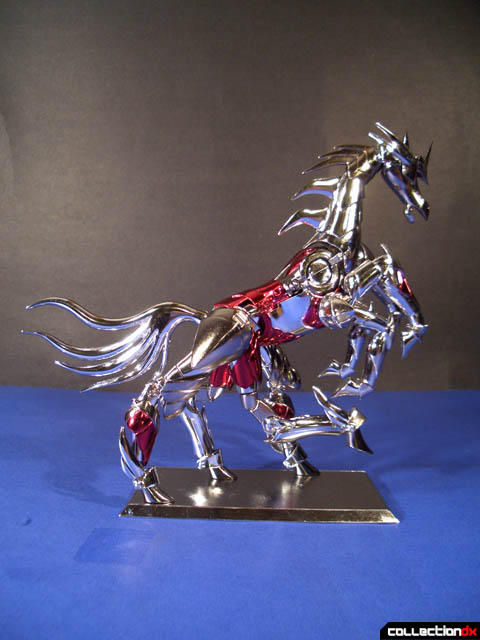 Hagen’s armor forms Sleipnir, Odin’s eight-legged horse. Most of the horse is a plastic statue with you adding the armor on to add detail and much like Hagen’s armor the statue is equally as shiny. It's actually all the shiny I am concerned about over time. I am not sure how the metalized plastic armor and statue pieces will hold up to repeat handling and oxidation. Time will tell I suppose. 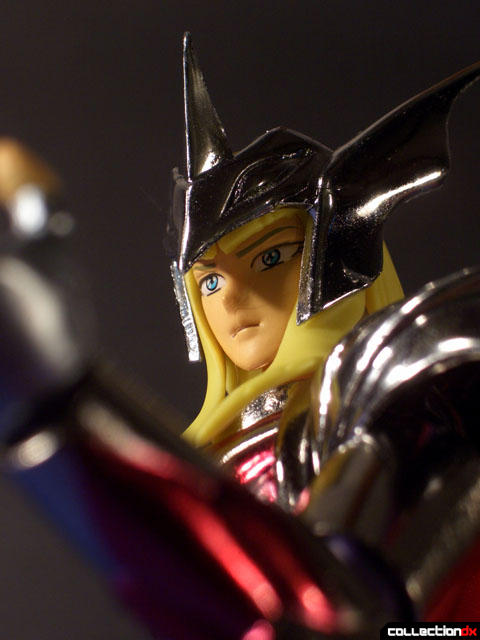 Despite my concern over the metalized plastic pieces I do think this makes one very sharp looking figure that I am happy to add to my collection. Even if you've never seen the show you should check out the line as they do have some great character designs and the quality of these figures is top notice.

I have also included a video review below for those that care.

If you are a Saint Seiya fan let me know what figures you would like to see reviewed next as there are a ton to choose from and as always I thank you for reading.

Great review
I'm a big fan of the Myth Cloth line.
Could you review, Gemini and Libra ??
Also the upcoming sea generals.
Thank you.

Say, Atom, is it just me, or does the unarmored figure here rather resemble the unarmored form of a Soul of Chogokin Spec Evangelion Unit[-01]??? Cause it sure does to me! A few new molds are here, eliminating some attachment holes, but it really looks like an SOCSpec 'naked' EVA! Is this set made by Bandai as well?
------------------------------
CollectionDX Staff